Whatever you’re doing – mixing, performance, sound design – return tracks can be really useful. They’re not like the other types of track in Live, but don’t be confused, as we’ll take you through the returning options. 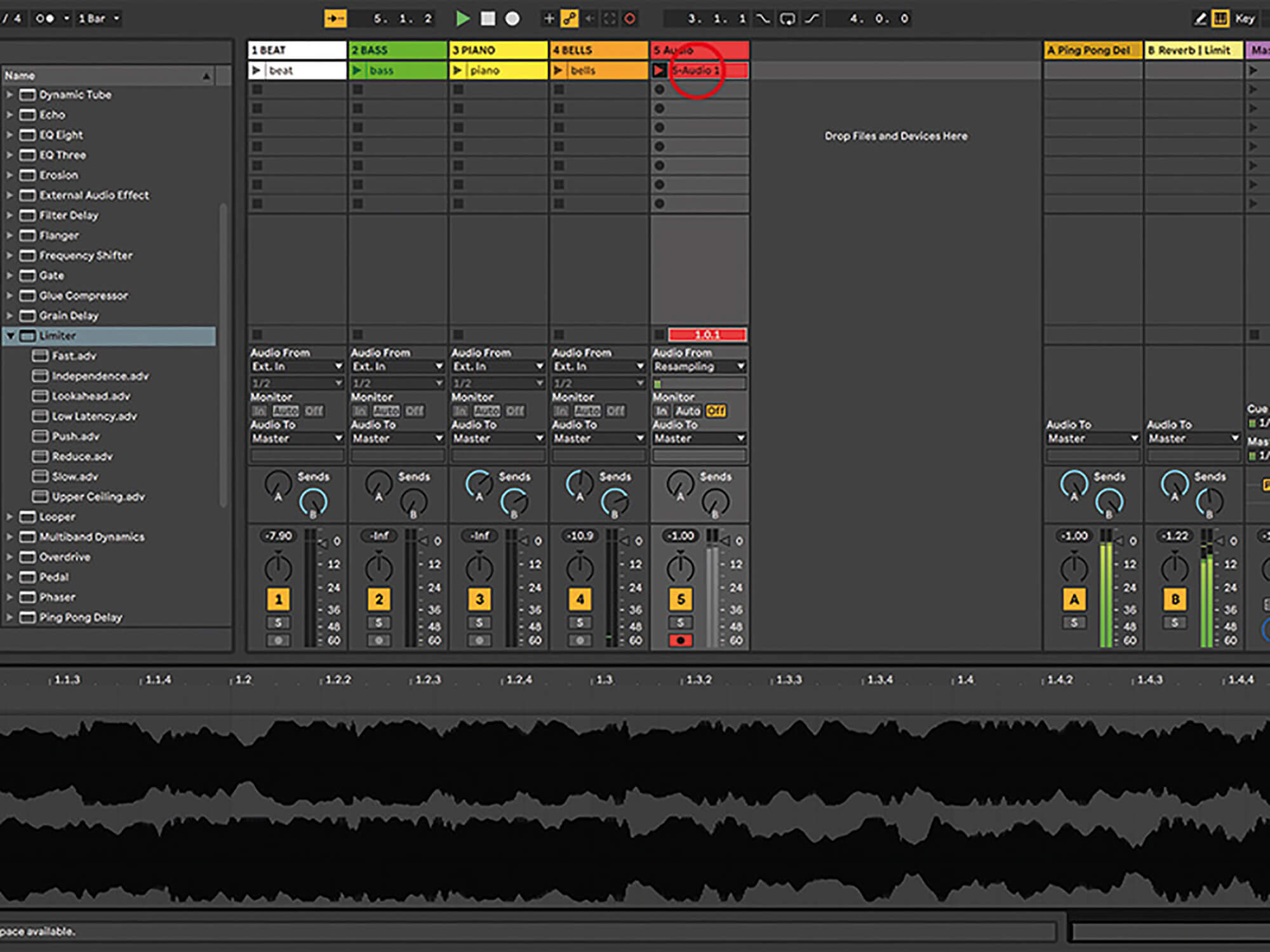 Return tracks are present in all versions of Live and they’re incredibly useful, so it’s worth paying closer attention to them. It’s also good to appreciate that they can be used for sound design and to host content that you might not expect to go in them.

A return track is a track that contains audio effects, and the output of every track in your project can be sent through it, using send controls. You can apply a common effect across many tracks and if you’re using a very CPU-heavy reverb effect, you don’t need to load 24 of them into your project – just one will do.

You might also know this type of track as an aux (auxiliary) track, and they can also be used to create alternative mixes – for musicians during a live performance, for example. Return tracks are audio-effect-only. You can’t add instruments, MIDI effects or clips to them; they’re designed purely to host and route effects. (It is possible to route multiple MIDI tracks to one containing an instrument, but that’s a workshop for another time.)

Return tracks can be elusive; you might need to use Alt-Cmd-R to view them, and even that won’t work if there aren’t any in the set, in which case, use Shift-Cmd-T to create some. As you create return tracks, sends are added automatically, but bear in mind that sends can be viewed/hidden independently of the tracks they’re connected to, so you might need Shift-Cmd-S to toggle them.

In Session View, returns appear at the right of the screen, snuggled up against the master track. In Arrangement View, the sends appear as teeny little boxes at the right of the screen – cue my usual beef about Arrangement View not displaying a proper mixer. The
Live default template contains two return tracks, pre-loaded with delay and reverb effects.

Live Intro allows only two return tracks, whereas Live Standard and Suite let you use up to 12. I have to say this is one of the main reasons I cite for upgrading, because there are days when even 12 returns are not enough! It is possible to simulate the behaviour of return tracks by using the In/Out View to configure different routings between audio tracks.

You could also do something similar with audio-effect racks, but it’s not as intuitive or fluid as using the default sends and returns. I’d love to see Live festooned with 16 return tracks at some point in the future.

By the way, if you find that you can’t rearrange returns by dragging them around, and you can’t duplicate them, it’s not you – that’s how they are! Once you decide what to load in your return tracks, they’re easy to feed from the send controls. As I said, you don’t need to see both, so you can save screen space by hiding the returns and viewing the sends alone.

If you’re using a hardware controller to operate the sends, then maybe you don’t need to see them on screen at all, which frees up even more of your screen.

Hardware control is particularly useful for sends, because of the sheer number of on-screen knobs involved. If you have three or more return tracks, and eight or more returns, that’s a lot of mouse work to keep adjusting those in a dynamic way. A controller such as the Novation Launch Control XL works so well for this.

As I mention in the walkthrough, not all effects are at their best on returns, because these tracks don’t replace the audio from the source track, they add to it. That means effects such as reverbs and delays work very well, but filters don’t. A filter is based on boosting and cutting elements of the source audio, but you won’t hear it doing much if the full original sound is still present as well.

Of course, there are very few absolute rights or wrongs with this stuff, so do whatever works for your music. As you add return tracks, you’ll see little Post/Pre boxes appear for each one in the master track. This switch determines whether the return track will be affected by the host track’s fader or not.

Return tracks themselves also have faders, so don’t be shy to use those as another way of adjusting effect levels. Although you can’t add clips or instruments to return tracks, you can cheat by adding a Looper, because Live considers that to be an audio effect, not an instrument. So you can import and even record sounds in return tracks after all. Sneaky.

If you’re of an experimental nature, you could do a live set using only return tracks, audio effects, and Looper. That’s my kind of jam, but just watch those levels! 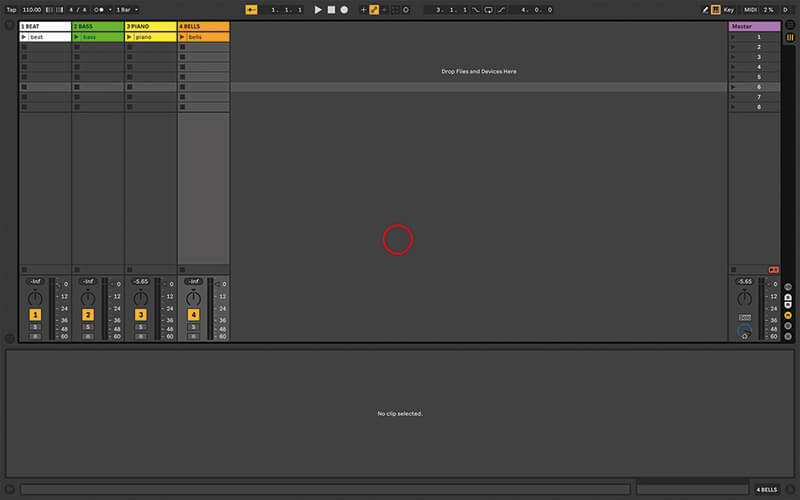 1. We’ve provided an Ableton Live set for this one, called Return Tracks – it’s got a few audio clips ready for you to start working with. You’ll need Live 10 to run it: download the demo from ableton.com if you don’t have it already. 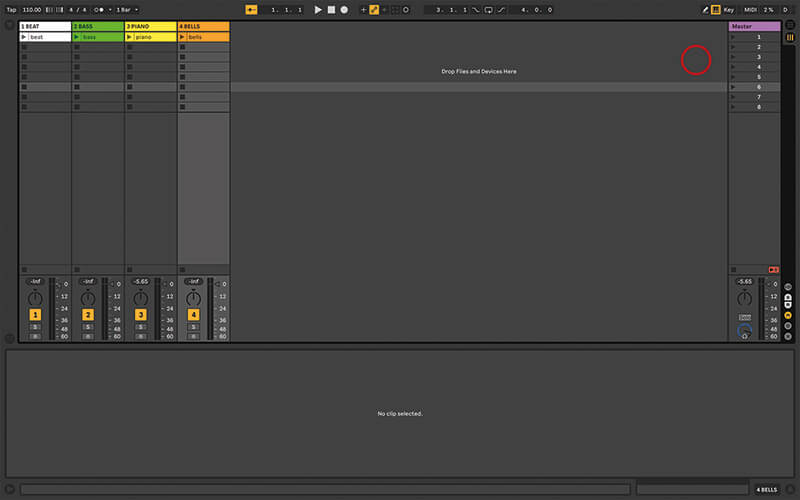 2. When you open Live, if you can’t see return tracks (at the right in Session View, at the bottom in Arrangement View), use Alt-Cmd-R to show them. If that doesn’t work, it probably means you don’t have any yet! 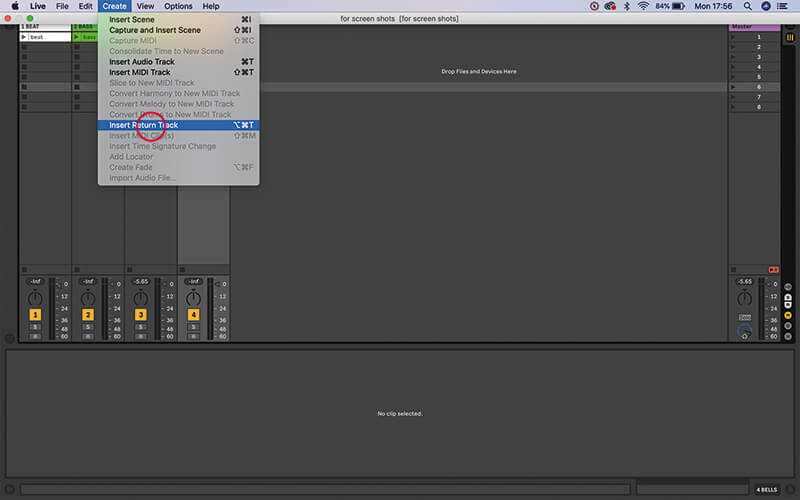 3. If that’s the case (there are none in our example set), use Alt-Cmd-R, then Alt-Cmd-T twice to create two return tracks. You might see little send controls appear as well, if not, use Alt-Cmd-S to bring those up. 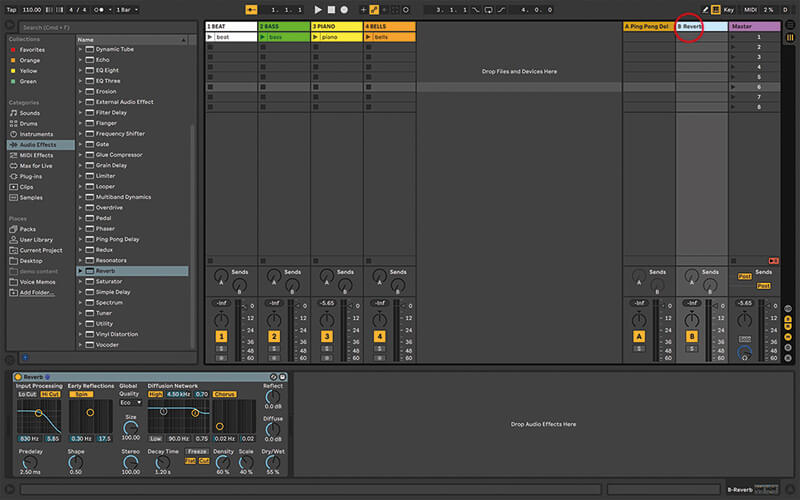 4. Return tracks are interesting, as you can only put audio effects into them – no audio or MIDI clips and no MIDI effects. They exist as an alternative way to route audio effects. Add Ping Pong Delay to return A and Reverb to return B. 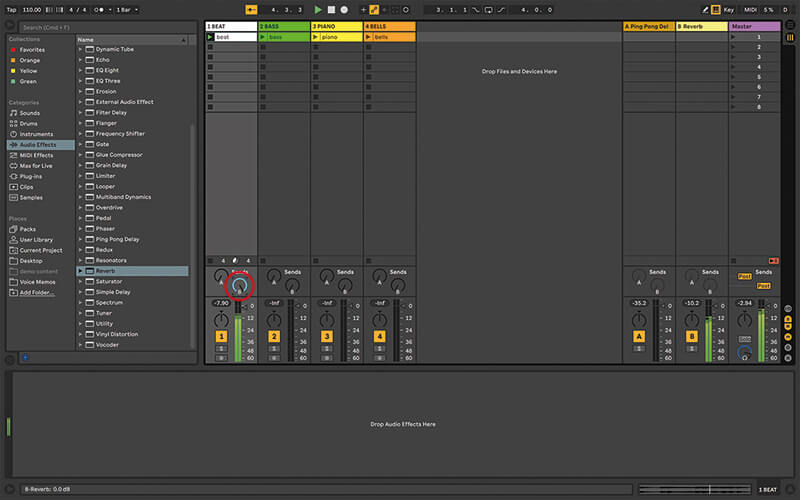 5. Let’s work on our drum beat in track 1, in the Session View. Start the beat playing (click the Launch button), then grab the Send B control and raise that slowly, and you’ll hear the Reverb begin to work on the beat. 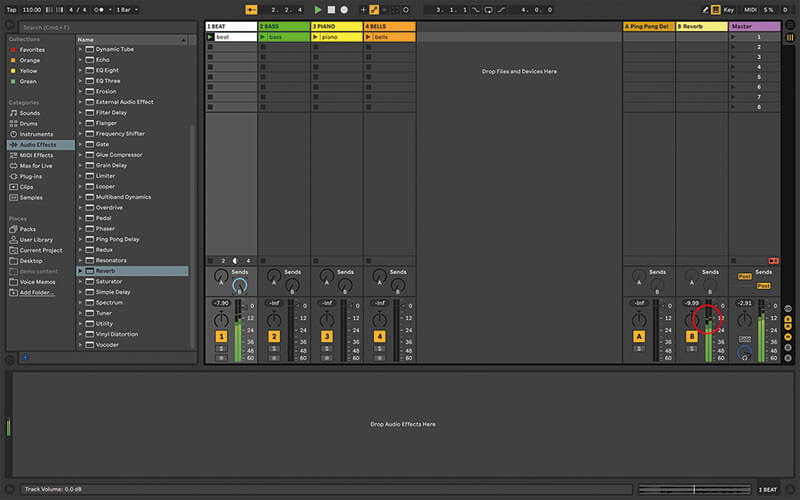 6. And that’s how to use a return track. You’ll find some effects work better than others as using a send doesn’t mute the original track’s connection to Live’s mixer, so the return effect is blended with the original sound.

MAP IT OUT Something I love to do for live sets is map the sends with Key Map Mode. Tap a letter, and the send jumps over to the right; quickly tap it again to reset and you get a nice quick ‘ping’ of the relevant effect. 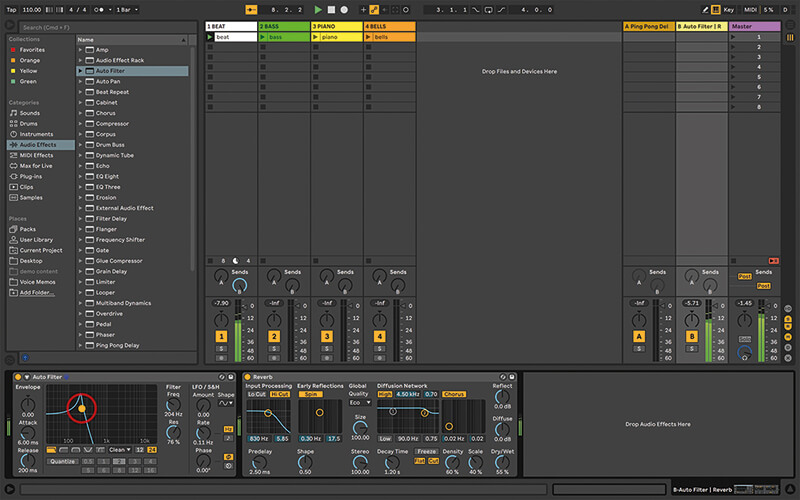 7. Anything that adds to the source sound – like a reverb, delay, or Beat Repeat – works fine on a return. Effects that normally subtract from the entire track output, like an EQ or filter, won’t work so well. 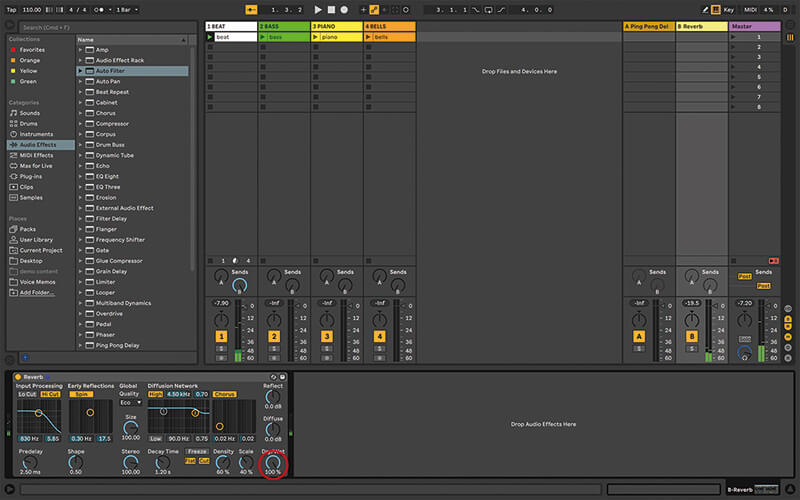 8. Because of the way sends blend in the effect, you wouldn’t usually use the effect’s Dry/Wet control as well, so typically that would be left maxed out for use on a return. Bring those to 100% on the Delay and Reverb. 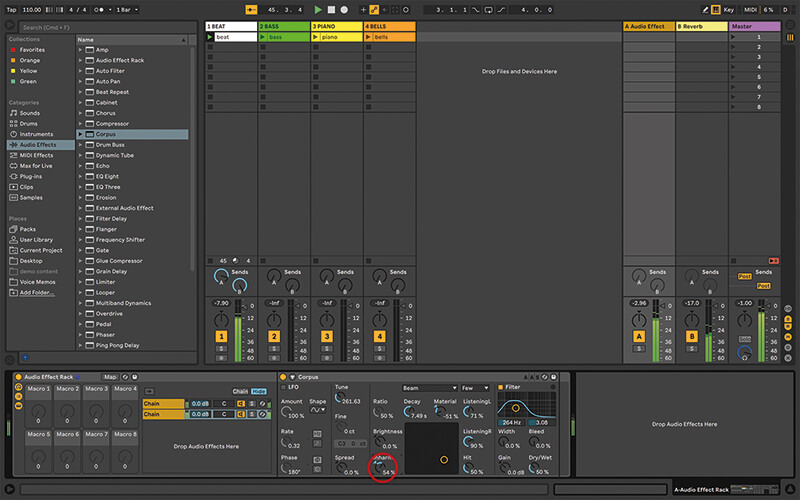 9. Audio-effect racks can be also used in return tracks, and they work in the same way as usual, but do bear in mind our comments about dry/wet settings. 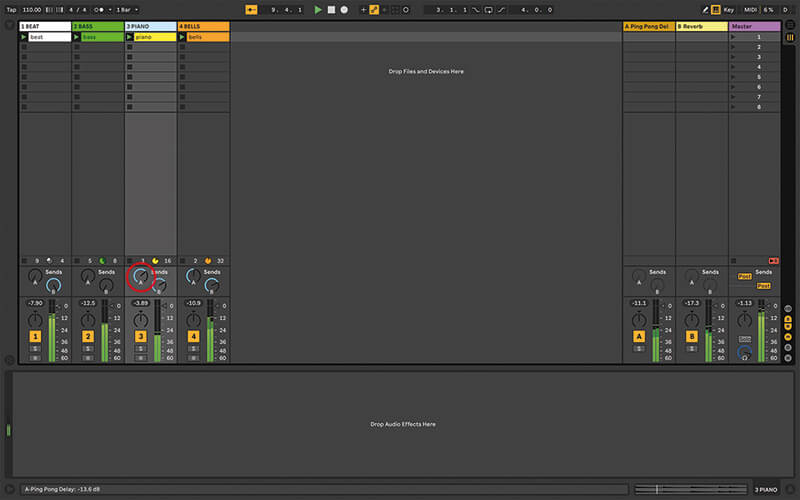 10. When you use returns is your choice. In mixing, they’re a convenient way to share an effect across several tracks, in different degrees. For live performances, they’re great for handling interactive, dynamic, effects. 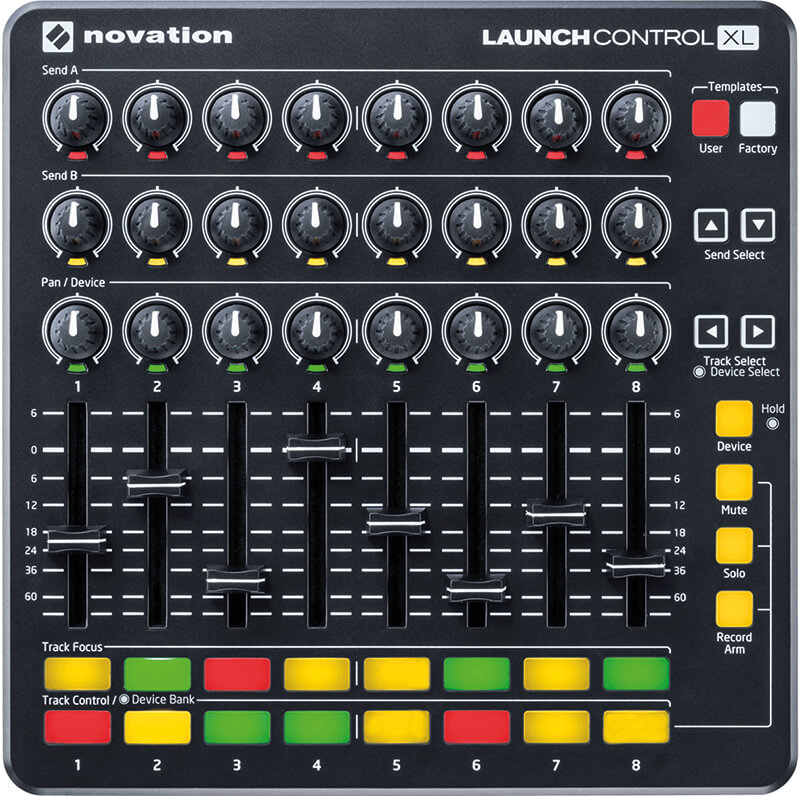 11. And in performance situations, return tracks come to life when you use hardware to control the sends; more so if you’re using the full allowance of 12 return tracks. 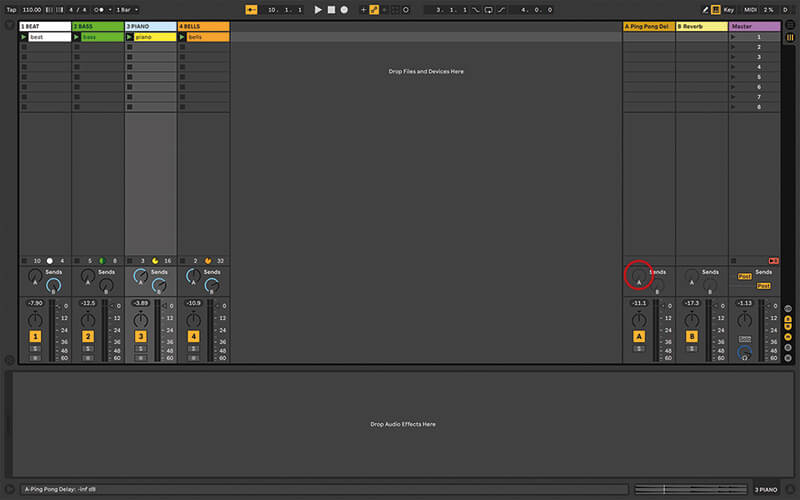 12. You’ll notice that the return tracks have sends of their own which are greyed out in Session View. They can be used to send returns to each other and even to themselves, a potentially feedback-causing situation.

HAVE IT ALL Here’s a useful tip. When you export your finished project, you can choose to export the individual returns, or just choose All Tracks to get everything. You might do this if you’re sending the song to be remixed or mastered by somebody else. 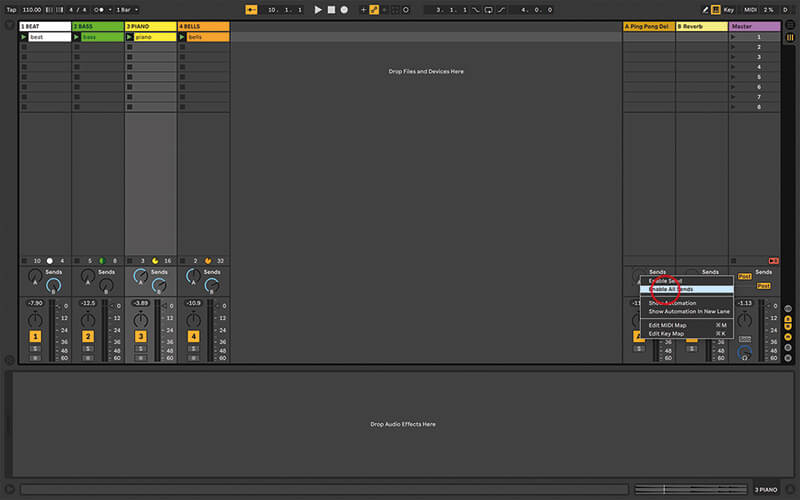 13. If you really want to experiment with routing the returns between each other, just right click on the greyed-out sends and choose Enable Send for a specific selection, or Enable All Sends, for all within that track. 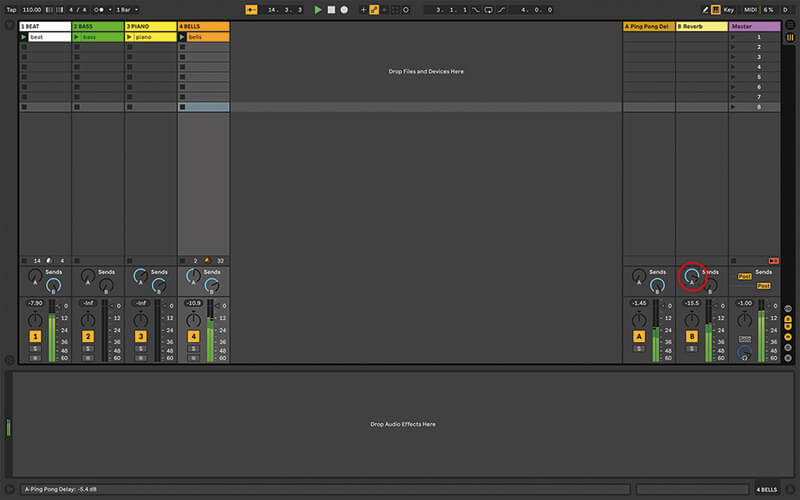 14. You can get some amazing sounds if you use this technique, especially if you’re willing to take the feedback challenge and send the tracks to themselves. This is great with reverbs and delays in particular. 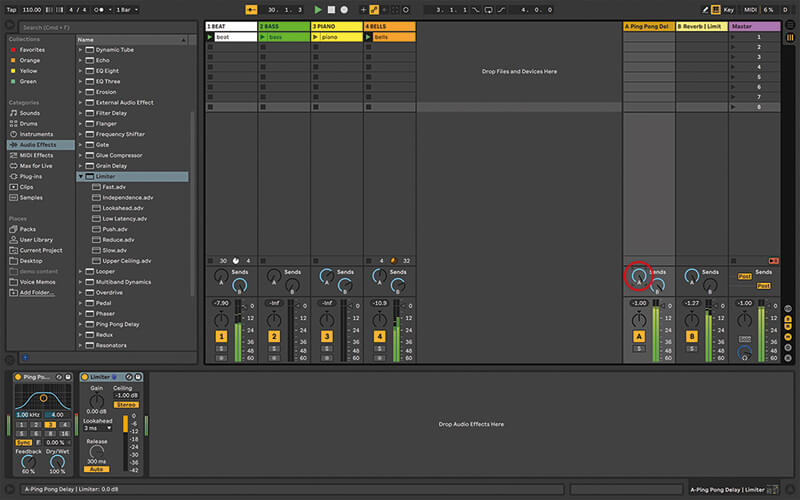 15. Be advised that you need to take precautions if you’re deliberately creating feedback. Try putting Live’s Limiter on each track and watch your headphone or monitor level. 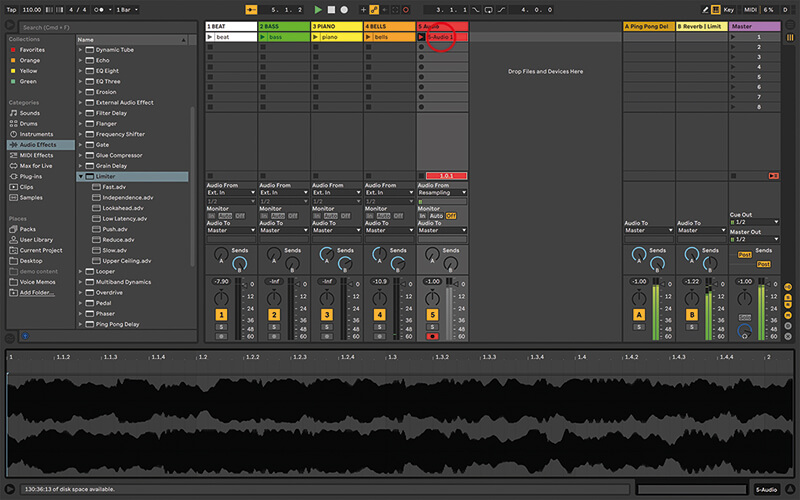 16. It’s a good idea to set up a resampling track and to hit record before you begin your feedback jam, capturing the whole thing back into Live. That way, you can cherry-pick the best parts. 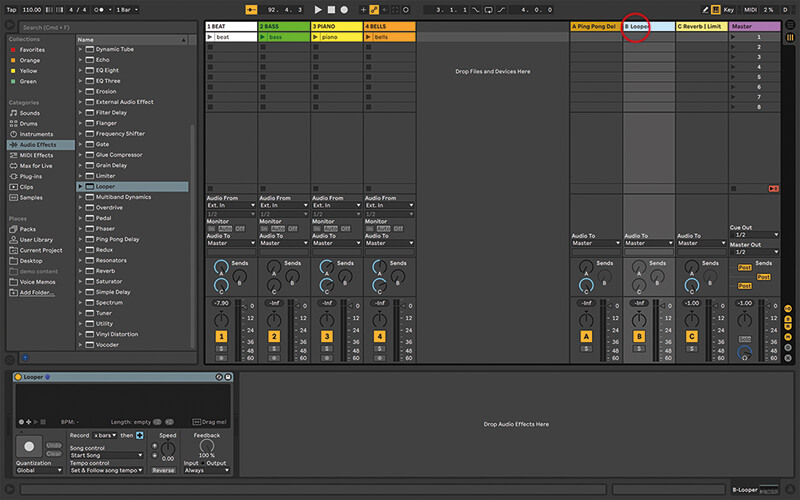 17. It’s not possible to add clips to return tracks, but we can be sneaky. They won’t let you load instruments such as Simpler either, but Live’s Looper is categorised as an audio effect. Drop Looper into an empty return track. 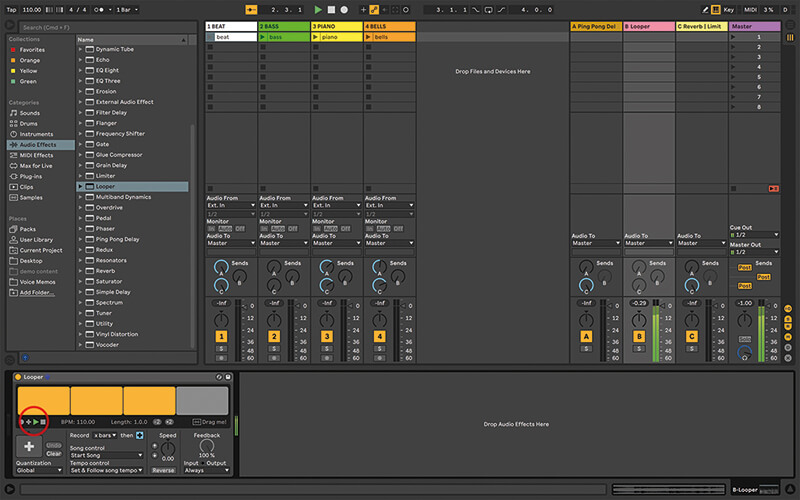 18. Drag the beat from track 1 into the Looper. It’ll play as normal and you can even add multiple Loopers or other audio effects per track. I’m not sure I’ll ever ‘need’ this in the real world, but I love these little workarounds!