Designing your own drum sounds from scratch lets you put your own sonic stamp on any production, as Hollin Jones explains… The invention of the drum machine caused a revolution in popular music. Suddenly, not only were producers able to program patterns that had never been heard before, but they could do so using sounds […] 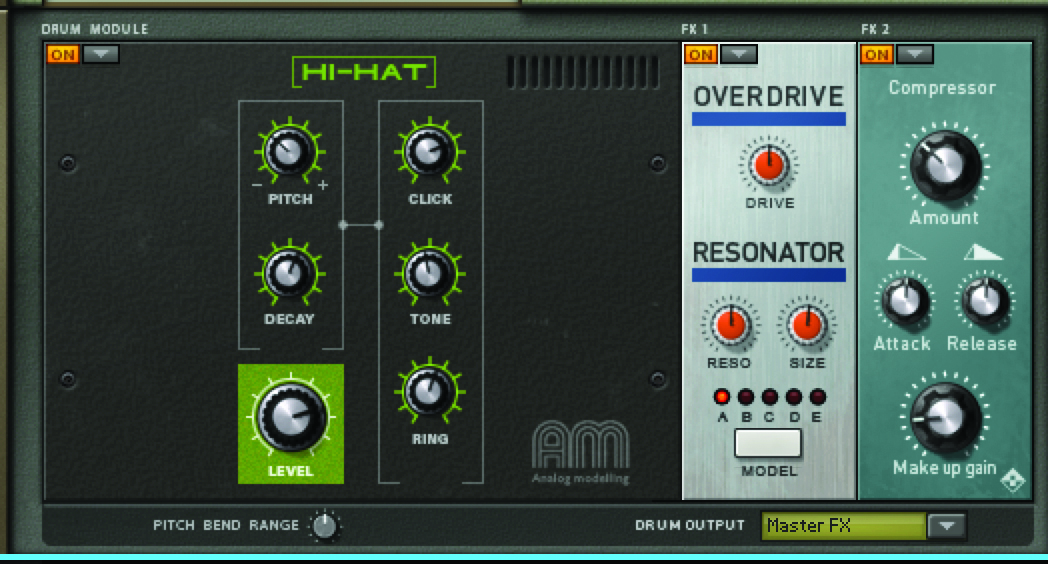 8: Keep going and fill the other pad slots with different sounds. You might want to add a synth hi-hat module for example, maybe using overdrive and compression as inserts to help the sound cut through the mix.

Designing your own drum sounds from scratch lets you put your own sonic stamp on any production, as Hollin Jones explains… 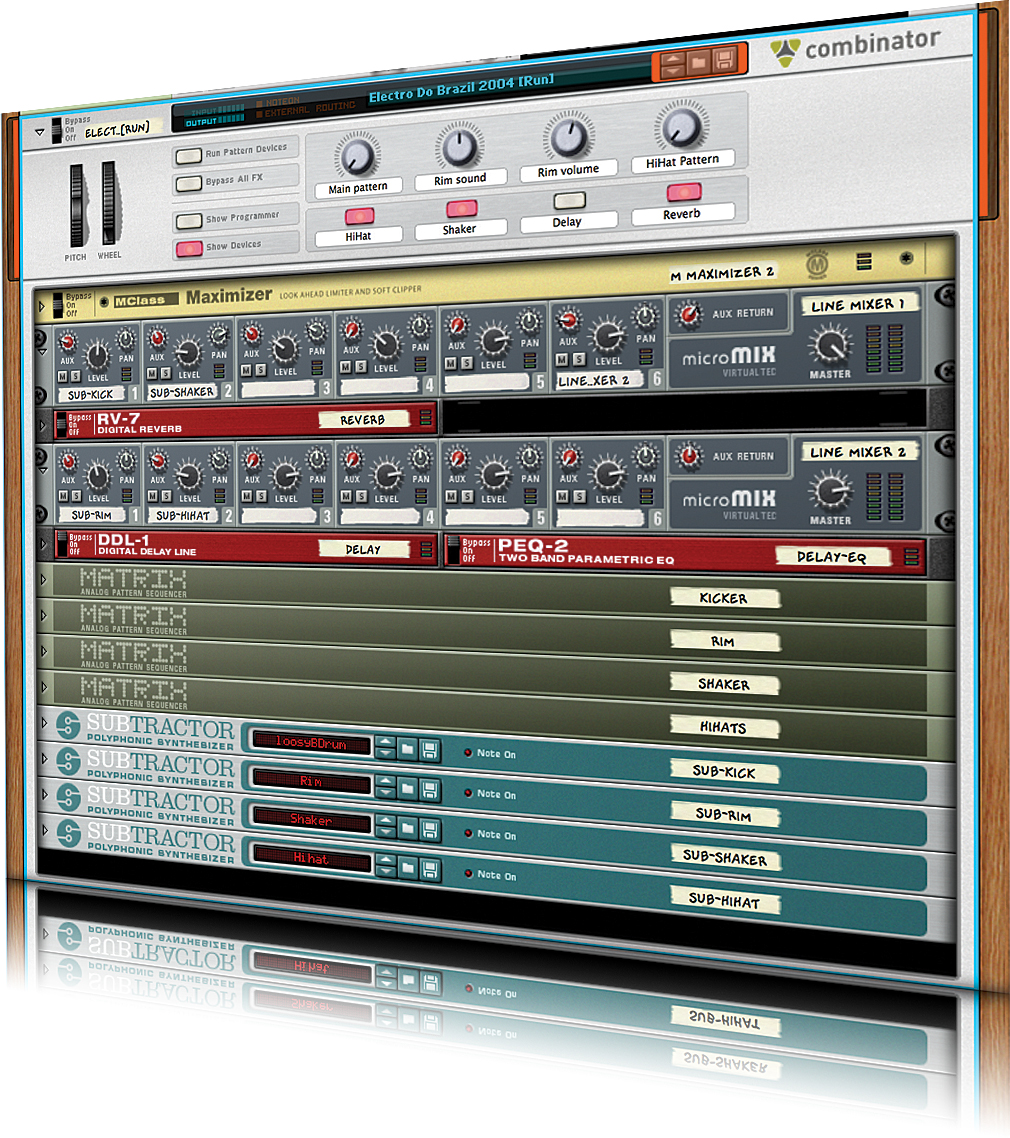 The invention of the drum machine caused a revolution in popular music. Suddenly, not only were producers able to program patterns that had never been heard before, but they could do so using sounds that were totally new and unique. Although some early drum machines such as the Linn LM-1 used digital samples, others such as the legendary Roland TR-808 used synthesis to generate its sounds, and the TR-909 used a blend of both methods.

The advantage of using synth circuits to make drum sounds is that they can be constructed from the ground up and then bent, twisted and tuned in any way you want. It’s true that nowadays you can process drum samples to an almost infinite degree, but when you literally control the waveforms and filters that are being used to generate a tone, your level of control is that much greater.

While many software drum machines have used samples (Reason’s ReDrum was for years its go-to beatbox) it’s often those that use synthesis for some or all of their sound generation that produce more interesting results. By designing your own synthetic beats you can make the drums a signature part of your sound. You may be adept at constructing your own synth and bass patches, but if you then just chuck in some sampled drum loops you can be missing an opportunity to stamp your character on the rhythmic component of your tracks.

There are plenty of tools that enable you to build your own drum sounds: Reason’s Kong Drum Designer is even named appropriately, FXPansion’s Tremor is a clever drum synth with built-in sequencing, and LinPlug’s RMV combines synthesis and sampling. There are more, of course, and although we’re going to look at how Kong can help you quickly build your own kit, the basic principles apply to most similar drum design plug-ins.

The great thing about synthesisers is that they’re hugely versatile. You can take the same set of modules and, depending on how you set them up, create everything from a deep kick drum to an arpeggiated pad. Of course it helps when a synth has been designed to be a little more specific, and to that end Kong (and similar software instruments) has drum synth modules that are specially tailored towards making certain kinds of sounds. If you expand Kong’s Drum and FX section and hit a pad you’ll see the current generator module appear along with any effects chained to it.

There are actually two categories of drum modules: ‘physical’ and ‘snare’, although the physical ones are actually produced using physical modeling synthesis rather than a real sample. There isn’t access to the most basic building blocks here such as waveform selection, although that stuff can be found if you make drum sounds using one of the other synths such as Thor or Subtractor, where you only get one sound per instance of the synth. 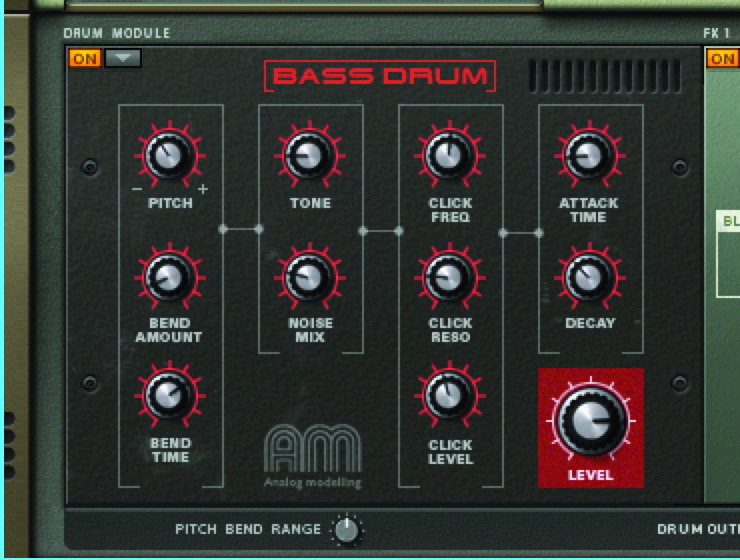 Going Above and Beyond
By tweaking the various controls and indeed swapping out different modules you can easily go far beyond the basic patches. You might even want to start by initialising Kong to clear out all its settings and starting from scratch.

It makes sense to map your kit in a fairly traditional way, with kicks and snares on pads 1-4, toms and cymbals on pads 5-12 and then FX and other weird stuff on 13-16, though you do of course have complete freedom to mix and match these however you see fit. In the Factory Sound Library you’ll even find Kong kits mapped in different ways, some for a MIDI keyboard and others for a MIDI pad setup, so you can choose which best suits your control surface.

Tuning is a key part of designing synth drums and this is an easy ways to differentiate kicks from snares and toms, by pitching them appropriately. It’s also a good opportunity to mix things up a bit, perhaps by creating a much more middle-heavy kick sound to double up with a very deep sub kick and, in the process, create a much more dense kick foundation. The snare, hi hat and tom synth modules are all straightforward in how they let you shape your sound, add noise and tweak decay. The physical modeling modules have different controls but are also pretty simple. Play with the virtual damping, tension and tone to create the desired drum effect.

To any module you can add up to two insert effects and although some like delay and filters will be familiar, the most interesting from a sound design perspective are Noise and Tone. These can fundamentally affect the character of the sounds. Bus and master effects are also available to process the output of the whole instrument, and individual modules can be submixed using their level dials. It’s even possible to route any channel out individually for post processing by spinning Kong around and grabbing cables.

Another great tip for synthetic drum design in any software is to automate synth parameters within your drum instrument. Not just conventional stuff such as levels or reverb amounts but also the building blocks of the patches. So you might automate the pitch of a snare drum as a track plays, or map a real-time MIDI control to it so you can tweak it for the purposes of automation or for better control during a live performance.

Focus On – Doing it Yourself

Reason’s other synths, and indeed any synth at all, can also be used to generate synthesised drum sounds. The difference is that they generally only do one patch at once, whereas a drum synth can hold multiple generators, one for each drum sound.

The way round this in Reason is to create a Combinator and then build several instances of synths inside it, each with a separate synthesised drum patch loaded. Use the Combi’s key mapping section to allocate each individual sound to a specific note or range of notes and you can create your own synthesised drum kit.

What’s really cool about this trick is that you don’t just have to use synths – you can build samplers, effects units and anything else you like into the Combi.