Effects sends don’t have to end with the effect itself – there’s still plenty of scope for more sonic manipulation. Mike Hillier returns to the scene… Watch any experienced mixer and you’ll see they usually have a few go-to send effects set up at the start of a session. On a DAW the effects sends […] 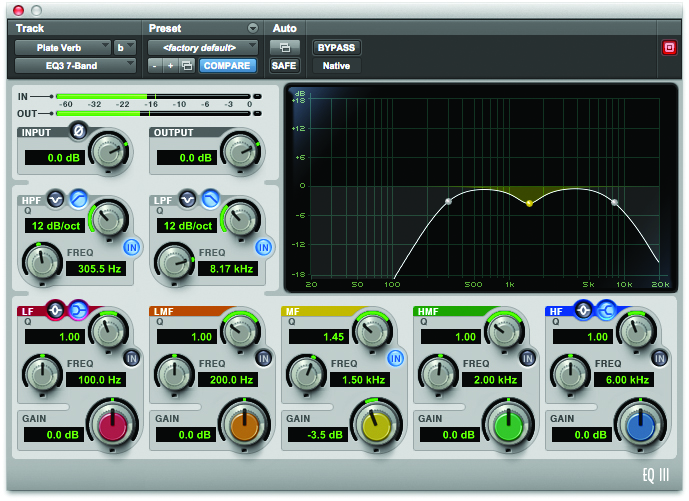 Effects sends don’t have to end with the effect itself – there’s still plenty of scope for more sonic manipulation. Mike Hillier returns to the scene… 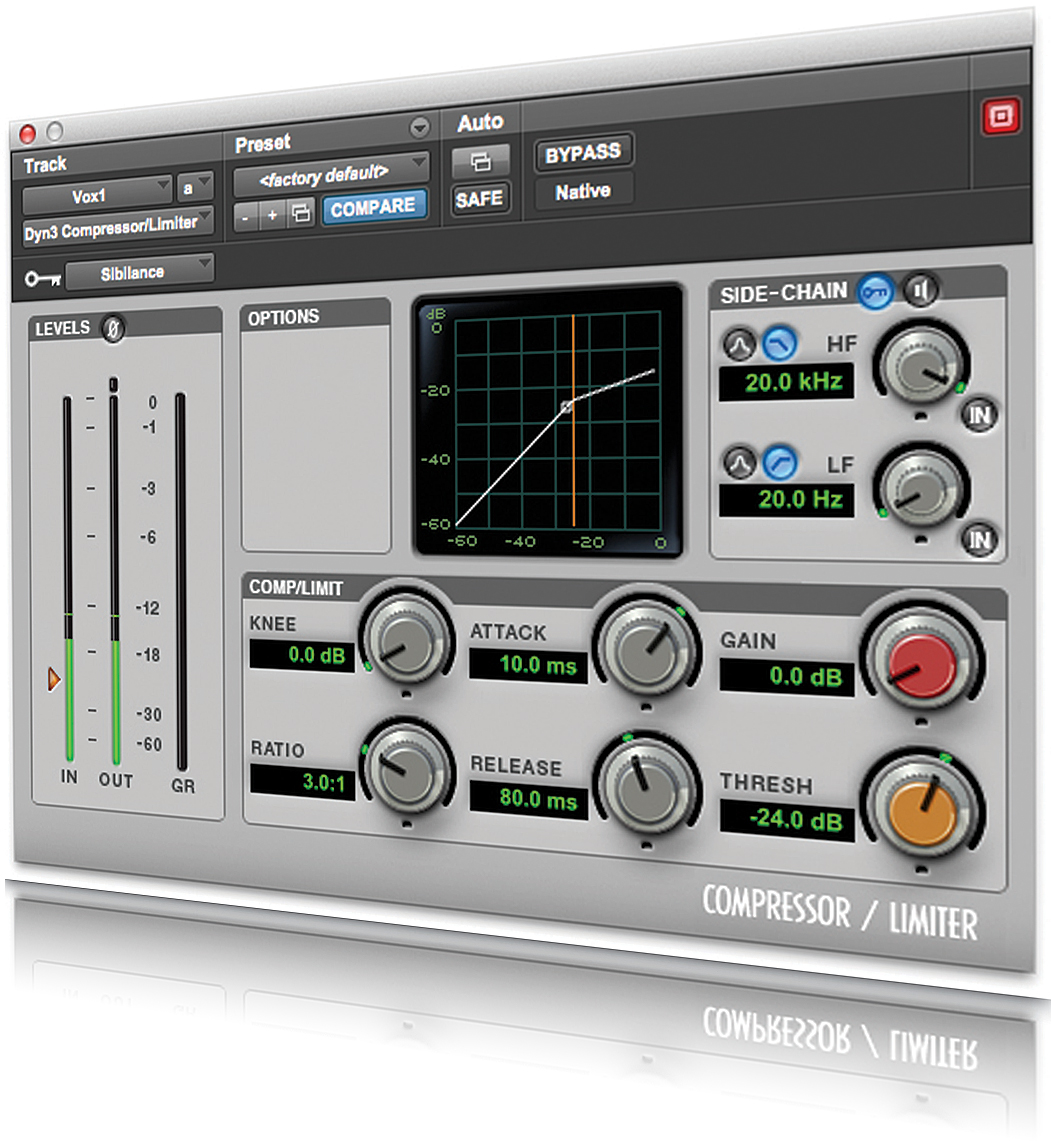 Watch any experienced mixer and you’ll see they usually have a few go-to send effects set up at the start of a session. On a DAW the effects sends usually come up on their own channel, and on an analogue desk they will usually be patched into a few spare channels at the end of the console. More often than not it’s the same three or four effects patched in every time: a plate reverb, a hall reverb, and a quarter-note delay, all ready to be brought up in the mix at any time without having to stop and set up the patch.

At first glance this may look like all the mixers are doing – the signal is sent to the effect and the return is brought up on the DAW/console. However, look closer and you will notice that the signal is almost never simply left alone. Mixers will EQ, compress and otherwise process the returns just as they would any other track in the mix.

In fact EQ’ing the effects returns is one of the simplest ways of helping a reverb or delay to sit in the mix without taking up too much space, and is something we do to every effects send in every mix.

The Colour and the Shape
Many reverbs and delays have some rudimentary built-in EQ, which can be useful in shaping the reverb tone, much like how the EQ on a guitar amp shapes the sound. We will start by shaping the reverb or delay with this, and then bring up another dedicated channel EQ in the next effect slot. Start by using high- and low-pass filters to top and tail the EQ curve, fixing the effect return into a small frequency space.

For some returns this is all that is needed, while others, such as the main vocal reverb, may require a little more attention. A high-pass filter as high as 300Hz and a low-pass as low as 6kHz are common for this task: we’re not just cutting out small amounts of the signal, we’re removing huge chunks of the spectrum. Instantly you should hear your whole mix sound less muddy and more refined. Sometimes a small cut around 1-2kHz can help to leave more room for the vocal and lead instruments to cut through.

The Big Squeeze
Compression can also work wonders on a reverb or delay send. Placed before the reverb/delay the compression will even out the signal before it hits the effect, creating a smoother, easier-to-place effect. This can help to prevent any stray peaks from poking through over and over again and is especially useful at keeping the reverb behind the dry signal on very dynamic recordings.

Similarly, a de-esser placed before the vocal reverb can help to keep the sibilance from overpowering the reverb – something that will instantly give away an amateur mix.

If instead of placing the compressor before the reverb/delay, you place it on the return signal, and then you can change the decay contour, which can be creatively inspiring. One very interesting trick when placing a compressor after a reverb/delay is to key the compressor sidechain from the dry signal.

Doing this will duck any delays while the dry signal is up and only bring the level back up when the dry signal drops away, keeping the signal clean until a rest in the dry signal leaves space for the delay to take over. Some delays, such as the Avid Dynamic Delay, can do this without any additional compression, but it’s better to know how to achieve the effect with any delay or reverb effect. EQ and compression are the most common tools to use on effects returns, the famous David Bowie Heroes vocal effect can be achieved with two or three different sized reverb sends, each with a gate.

The key here is to set the gate thresholds so that each reverb only opens as the performance gets louder. Distortion effects can be useful as well, especially with digital delays to add a sense of grit back into the signal. Similarly, a chorus can be a really fun tool when added to a delay. We’ve also had some success with tremolo on reverbs for creative sound-design applications.

Any compressor with a sidechain can be set up to be used as a de-esser by keying the compressor from an EQ’d version of the signal. To do this, send the signal to an aux channel and EQ this to focus in on the sibilance.

This can be anywhere from 2-8kHz depending on the vocalist. Once you’ve found the sibilance, route this to a new send buss (but you needn’t bring it up on an aux) and remove the EQ’d channel from the main mix by setting the Output to ‘no output’. Finally, add a compressor to the original channel with the sidechain set to the buss coming from our EQ’d sibilance channel. 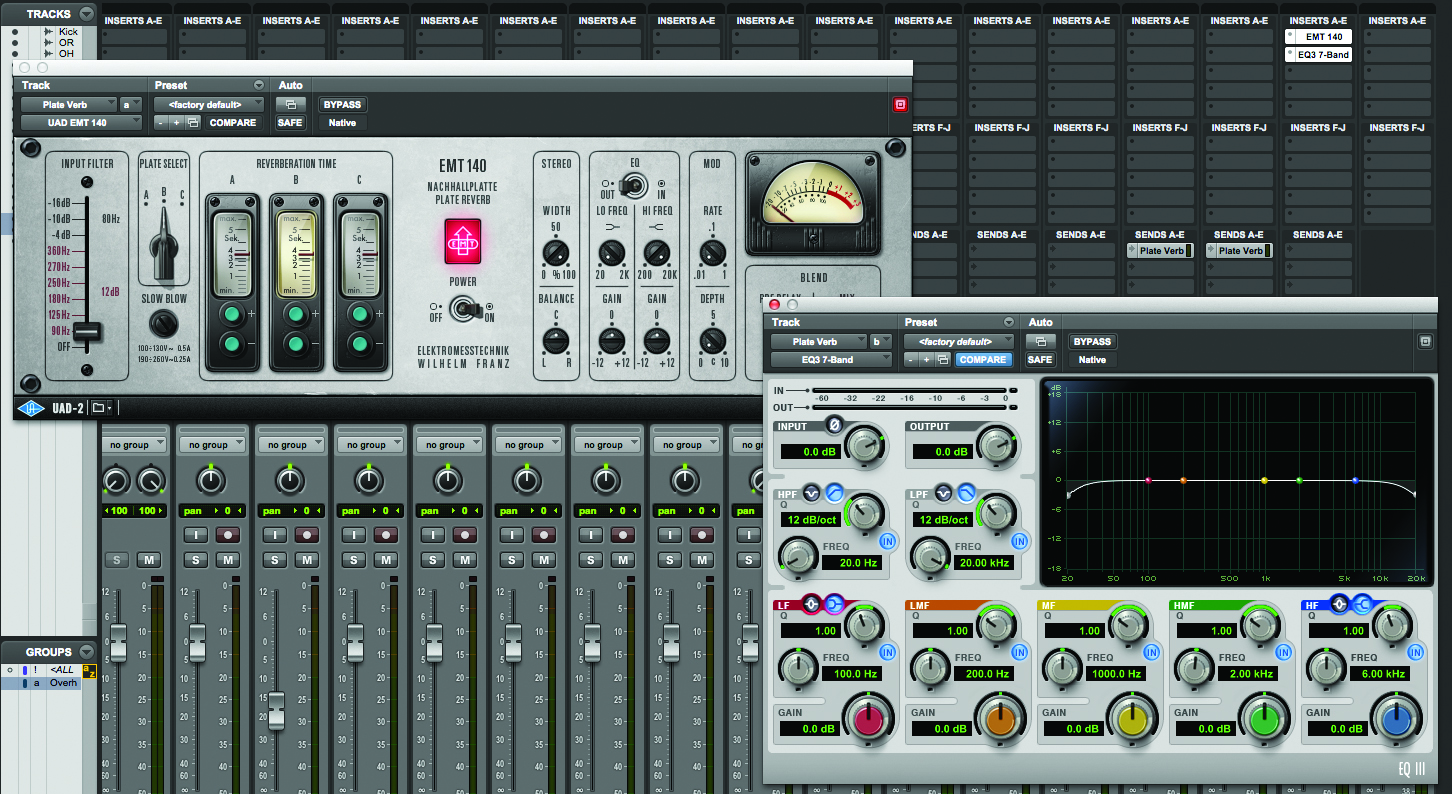 1: Bring up your favourite reverb on a new aux channel and route the input to a spare buss. In the next insert slot, add an EQ. Any good parametric EQ with filters, such as Avid EQ III, will work well. 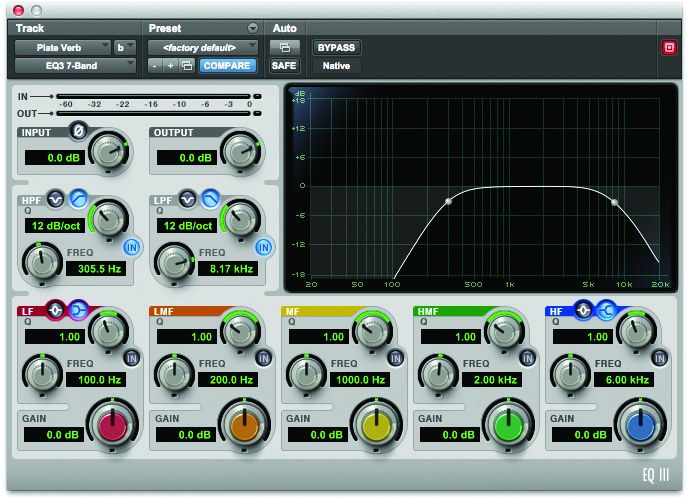 2: Use a high-pass filter to cut out much of the low-frequency mud from the effect return, and a low-pass filter to place the return further back and leave more room for the dry signals in the top end.

3: On a vocal reverb a little more attention may need to be paid to place the reverb. Pulling a little out at 1-2kHz can help to give more presence and clarity to the dry vocal.

4: Add a compressor before the send effect to even out the performance. This will prevent any louder sections from flooding the reverb and masking the main performance. 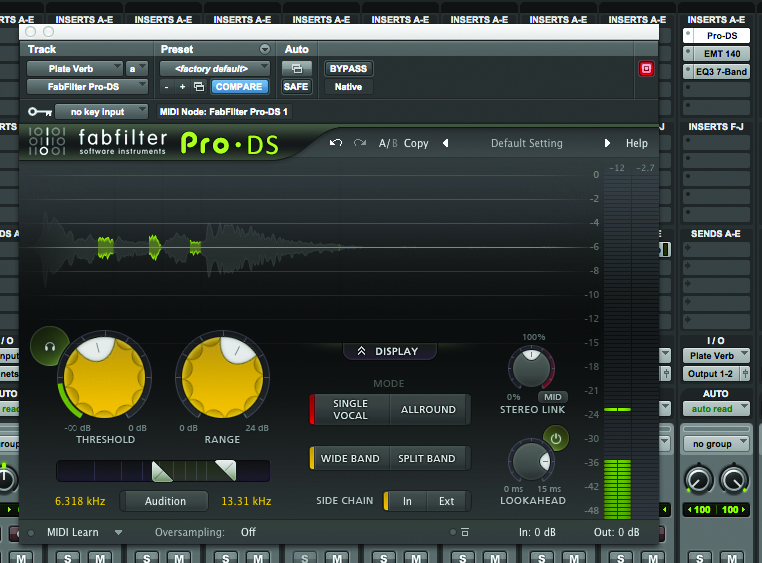 5: If your main problem is sibilance flooding the reverb (‘ess’ sounds that jump out in the mix and last for several seconds), then try placing a de-esser before the vocal reverb. This should even out any sibilance peaks distracting from the main performance.

6: Adding a compressor after the reverb will bring up the reverb tail, changing the natural sound of the reverb and giving a stronger sustain to the signal. Great for epic vocals. 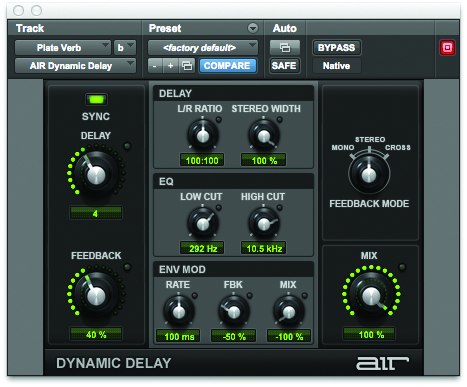 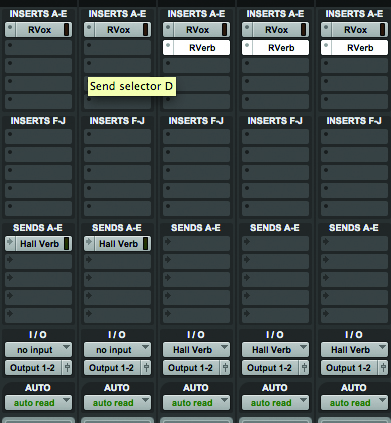 9: For the Heroes vocal effect, set up three reverb auxes from the same send, each with a gate. The original effect had the gate after the reverb, but it’s a little easier with the gate before the reverb. 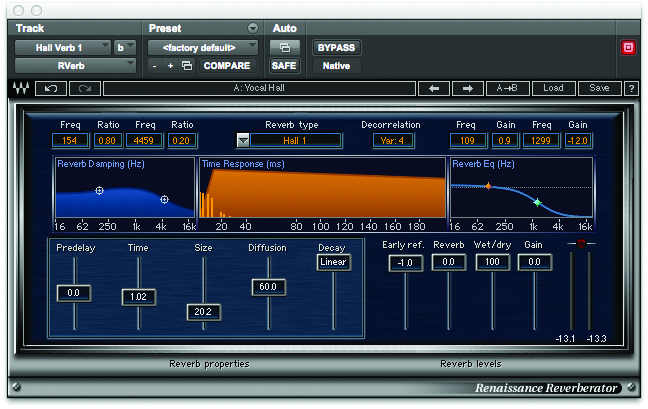 10: To emulate the increasing distance of each reverb, expand the reverb size and pre-delay so that the first is the close reverb, the second a little further, and the third a distant echo.

11: Once you have each reverb set up individually, set the thresholds of the gates leading to each reverb so that the close reverb is usually open, the middle reverb less often, and the far reverb only on the loudest sections of the song. 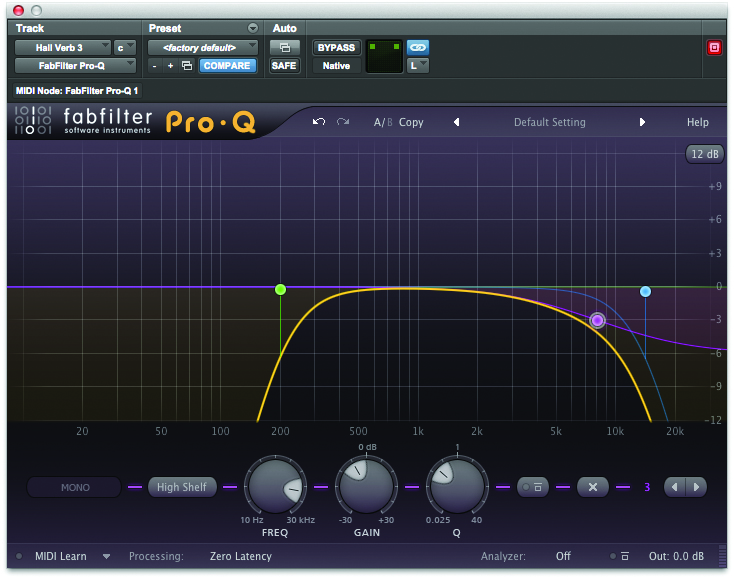 12: To further emulate the increasing distance of each reverb you could pull out more of the top end of the most distant reverb, either on the reverb itself or on an EQ added to the return.