Point Blank Tutorial: Phaeleh Pulls Back The Curtain On His Live Show

Delve into Phaeleh’s Live Show in this live performance breakdown at Point Blank London & XOYO… Over his decade-long career, Phaeleh has become synonymous with a widescreen brand of club music with an epic scope. The post-millennial landscape of British electronic music – dubstep, garage, house – are all refracted through his unique lens to […] 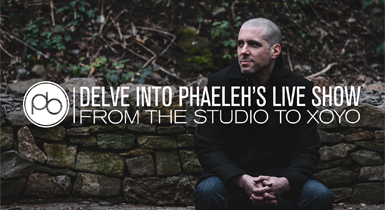 Over his decade-long career, Phaeleh has become synonymous with a widescreen brand of club music with an epic scope. The post-millennial landscape of British electronic music – dubstep, garage, house – are all refracted through his unique lens to create the gorgeous soundscapes personified by his 2010 classic ‘Afterglow’.

The Bristol producer and live performer has gone on to start his own label, Undertow and released the critically acclaimed ambient LP, ‘Illusion of the Tale’. He dropped in to Point Blank in London ahead of his show at XOYO to make this insightful video. If you’d like to learn how to craft intricate and varied live performances, their Diploma courses and Degree Programme in London include a module on electronic music performance, as does their new online BA (Hons) Music Production &  Sound Engineering degree.

In a delightfully frank and light-hearted video, Phaeleh aka Matt Preston talks through his live set-up and artistic practice and invites PB to film some of his sold-out show at London’s XOYO. In the studio, we get a glimpse of how he uses Max for Live as he stresses the importance of the human element of performing.

Essentially, he uses his recorded tracks and stems as a source, triggered via his Livid console, and will then jam around on his kit from Roland and Korg to add an improvisational edge. One of the key things for Preston is to ensure the portability of his touring equipment, and for him, mistakes and imperfections are all part of what makes a live set interesting for both artist and audience.

Study with Point Blank for comprehensive tuition in any aspect of music making. Their production courses can teach you from the ground up, or help take your tracks to a new level. If live instrumentation and sound engineering is your thing, they have a range of courses to suit those needs. Check out their online school too for more options outside of London. Call them on +44 20 7729 4884 if you have any questions.