The final process in the mastering stage doesn’t involve processing the audio at all. Mike Hillier readies his printer.. The final step of mastering comes once all the tracks for the release are processed and (usually) rendered, and involves the transfer of the final files to the release medium. In the case of a digital […] 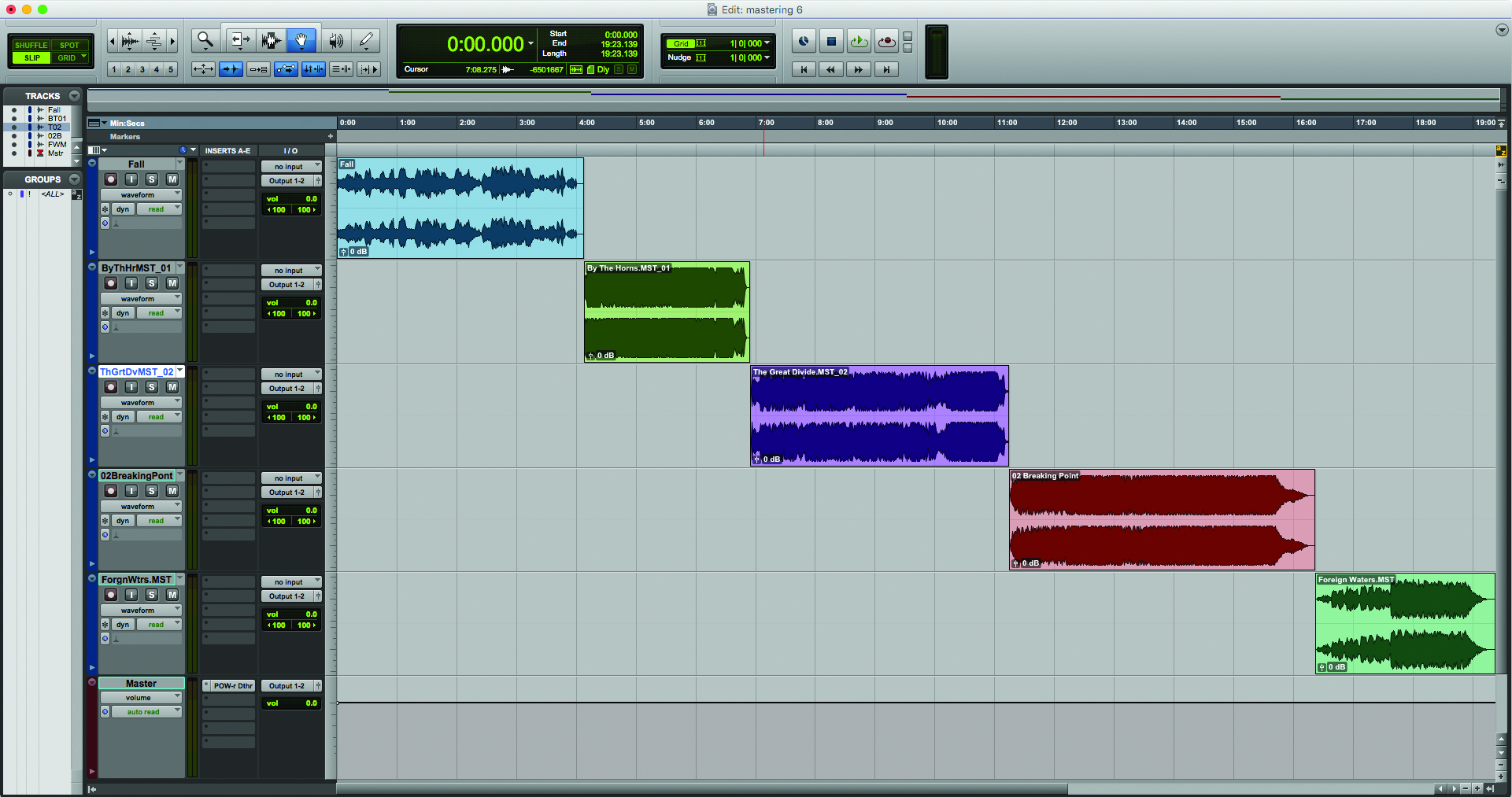 The final process in the mastering stage doesn’t involve processing the audio at all. Mike Hillier readies his printer.. 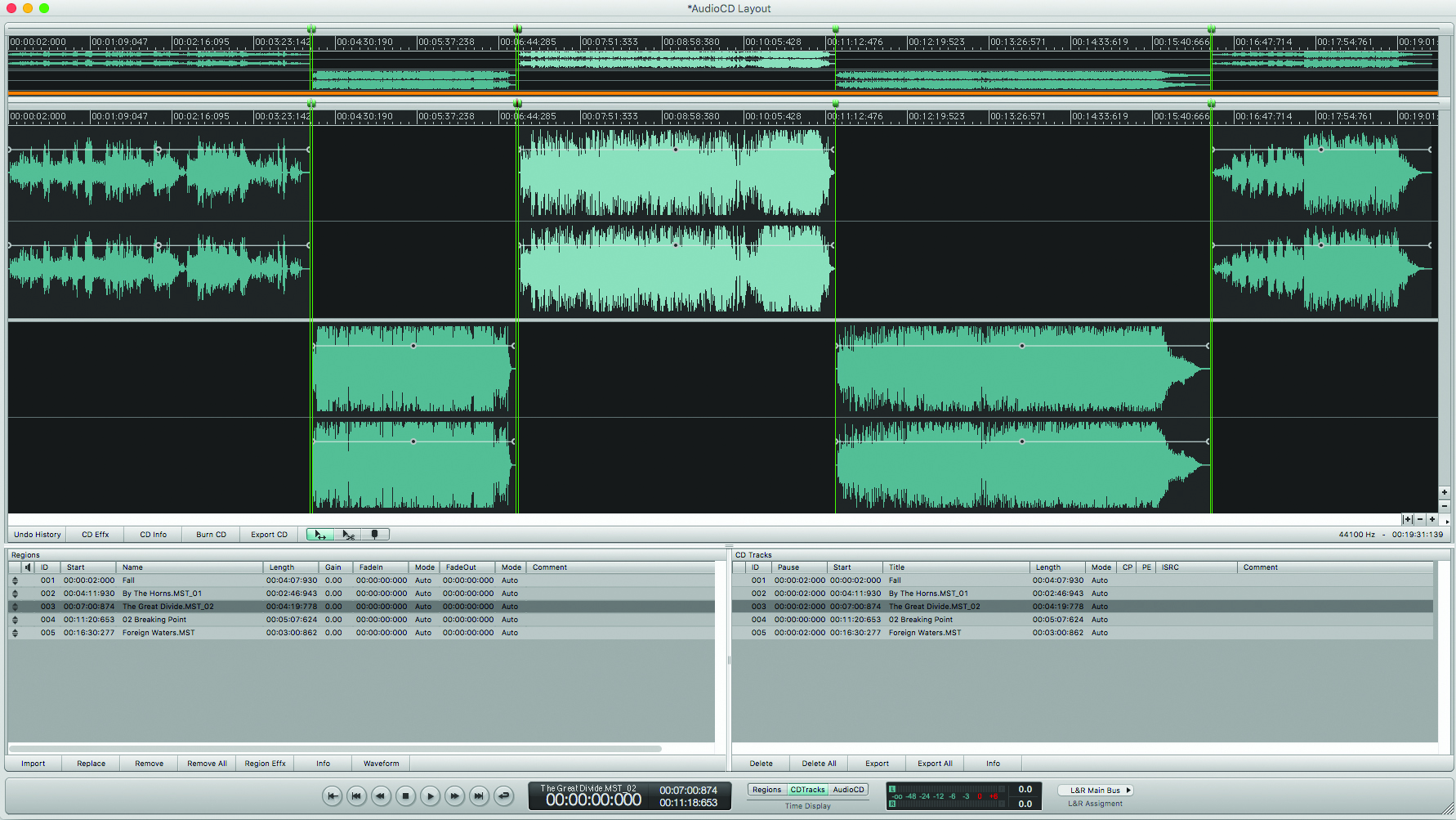 The final step of mastering comes once all the tracks for the release are processed and (usually) rendered, and involves the transfer of the final files to the release medium. In the case of a digital download, this can be quite simple, involving little more than converting the file into whichever format is required by the digital store you are releasing through. But for CD, vinyl or cassette, this process can involve quite a few extra steps.

Digital Download
For downloads, the mastered files simply need to be converted to the relevant formats and checked. The final mastered format should be the highest quality available. This is usually 32-bit WAV at the sample-rate the track was recorded at.

While increasing the bit-depth can be advantageous in mastering, you should only increase the sample-rate if you’re running the audio out through analogue hardware. There’s no advantage to converting a 44.1kHz file to 96kHz or 192kHz if all processing is done in the box, but plenty of headaches will be incurred – not least the additional disk space required.

As a rule, it’s best to provide the client with the ‘archive master’ at full resolution, alongside 24-bit, full sample-rate and 16-bit/44.1kHz dithered versions. This will future-proof the master for any potential digital formats, while also providing a 24-bit version for most online stores and a 16-bit version for older stores. Don’t forget to clearly name each file.

Some clients may also request an mp3, which we usually supply at 320kbps fixed bitrate unless an alternative is requested. The mp3 should be converted from the archive master, and not one of the second-generation dithered files.

CD
The final format for most CDs is now the DDPi format, which contains all the information necessary to print Red Book-standard audio discs, complete with the running order, gaps, and any additional metadata embedded in the disc.

The alternative is to print a Gold Master disc, although this is becoming increasingly less common. Some DAWs, such as PreSonus Studio One, can export DDPi files already, while others require additional plug-ins such as the HOFA CD-Burn suite. Many mastering engineers, however, prefer to use dedicated mastering suites such as Steinberg WaveLab, DSP-Quattro or Prism Sound SADiE.

Dither should always be applied whenever you move from one bit-depth to a lower bit-depth; for example, when rendering a 24- or 32-bit file down to 16-bit. This process adds very low-level noise which randomises the quantisation errors which are otherwise frozen in the audio signal. The result is paradoxically a cleaner signal.

1:If you’ve been working through the previous workshops, you should have five mastered tracks to work with. Line them up how you’d like to hear them in your DAW, with the HOFA CD-Burn & DDP plug-in as the last plug-in on the master channel. Leave gaps or fades between songs. 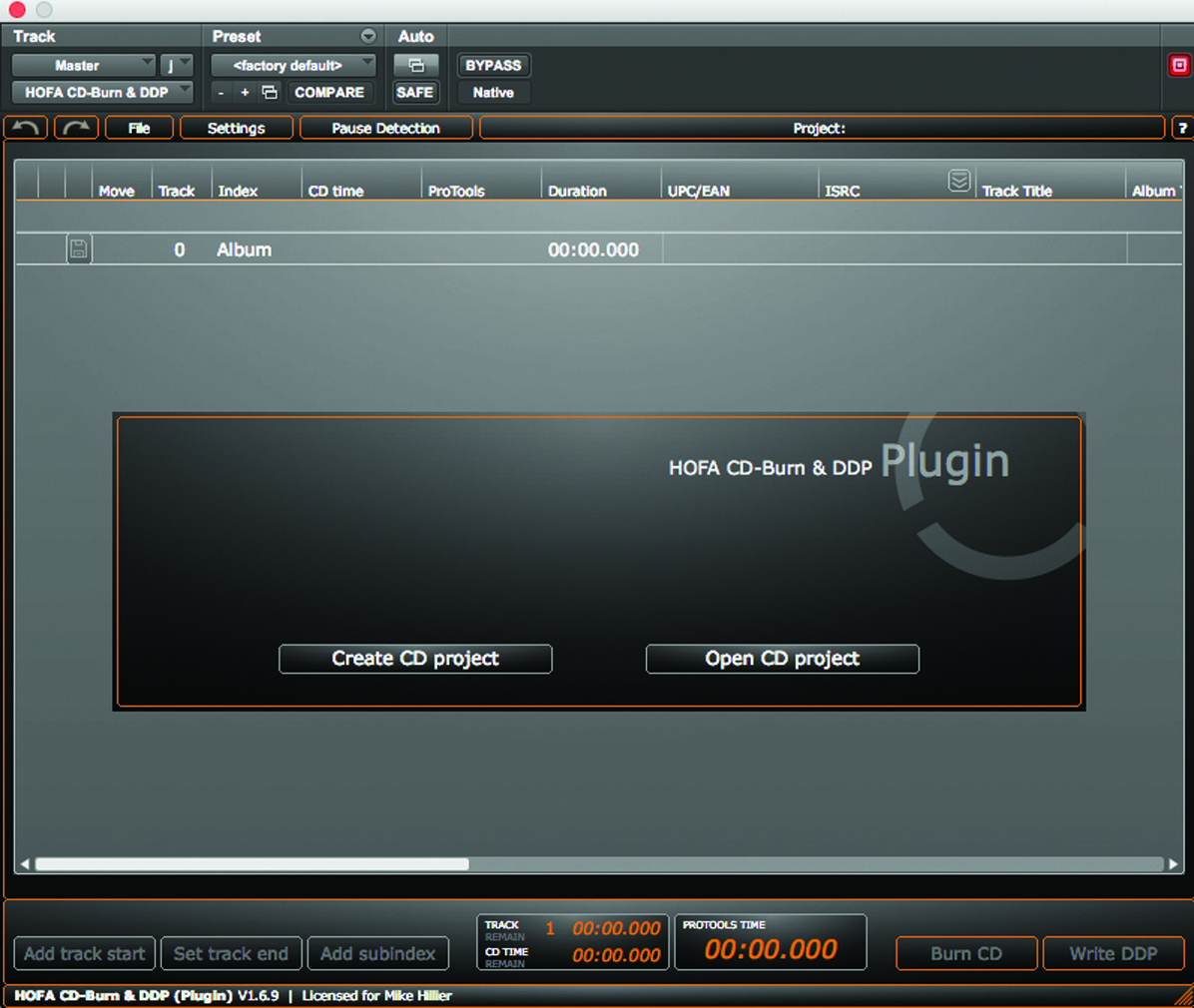 2: In the HOFA plug-in, create a new CD project and then bounce the full session to a single audio file. The bounce must start at 0:00 on the DAW timeline. In the export settings, export as a 16-bit 44.1kHz audio file. If your audio isn’t dithered, add a dither to the master buss.

3: HOFA will ask where the new file has been placed, so navigate to the newly bounced audio and direct HOFA to the file. 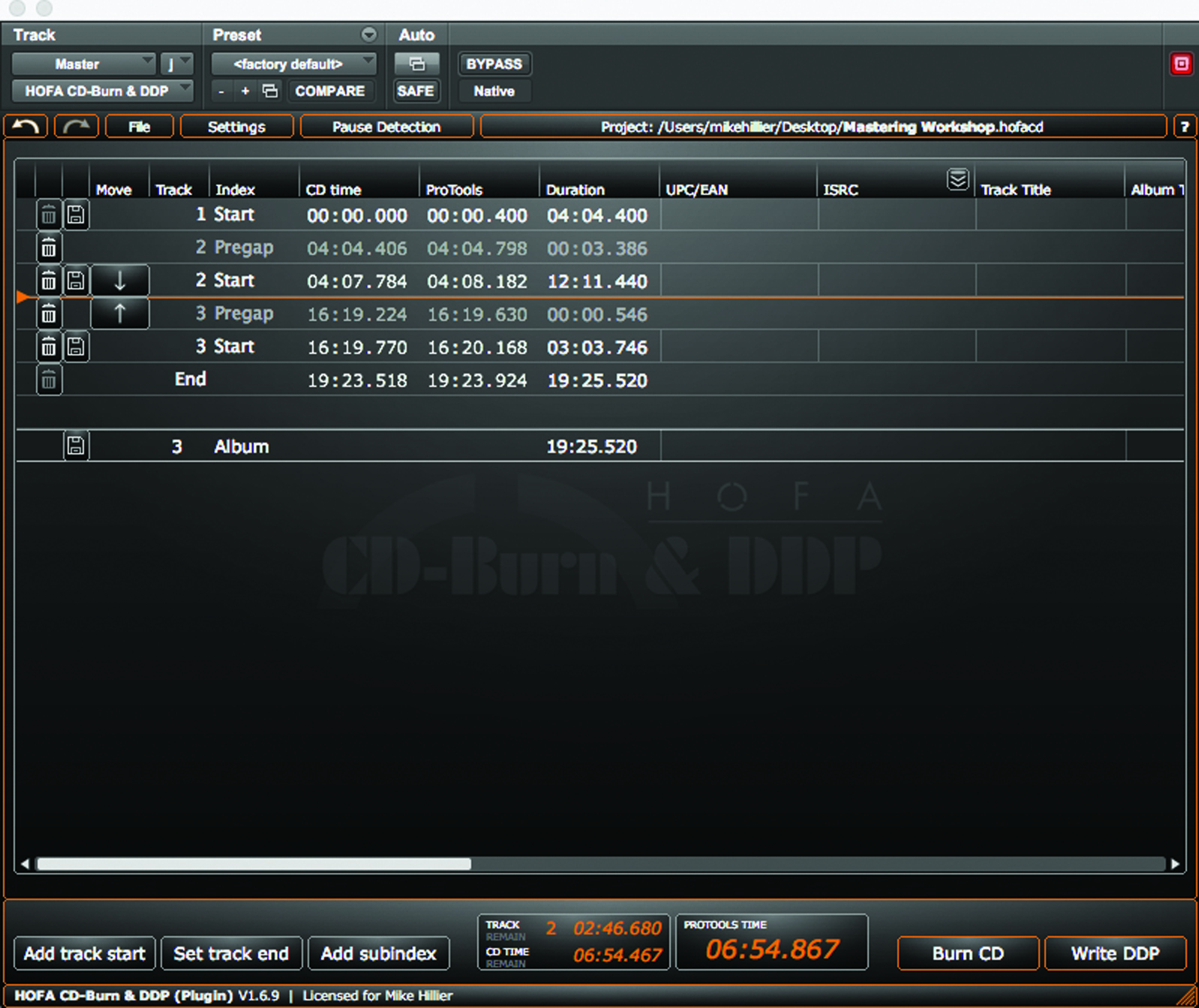 4: The HOFA plug-in will now reference the new audio file, and place markers corresponding to the tracks in your session. If, like here, it misses any, be sure to enter new Track Start positions for the missing tracks. Check each of the track markers in turn to be sure they match up. 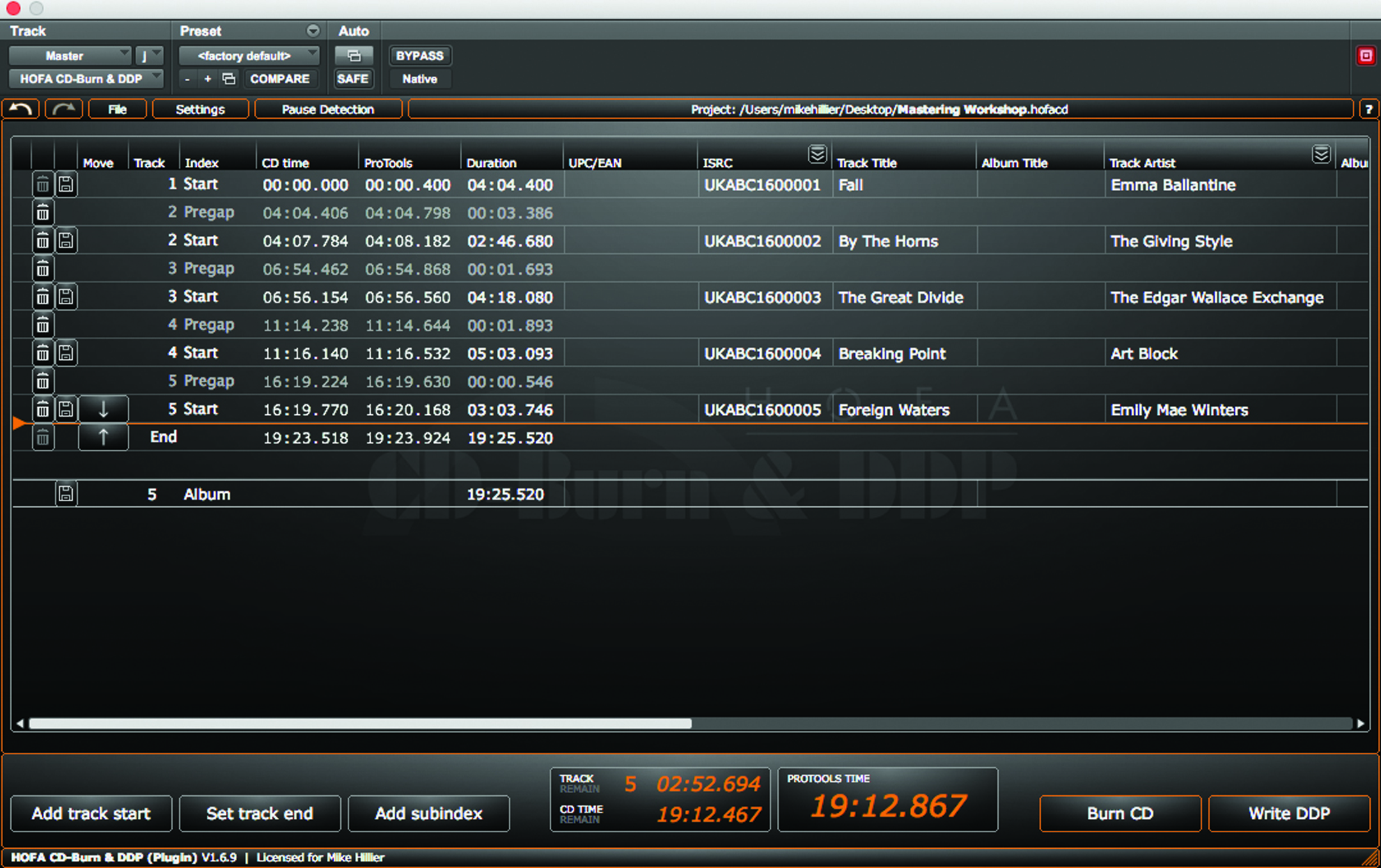 5: Enter the album metadata into the HOFA CD-Burn & DDP plug-in. Make sure you spellcheck all the song and album titles as well as artist names, and triple-check any UPC/EAN or ISRC codes you are embedding. 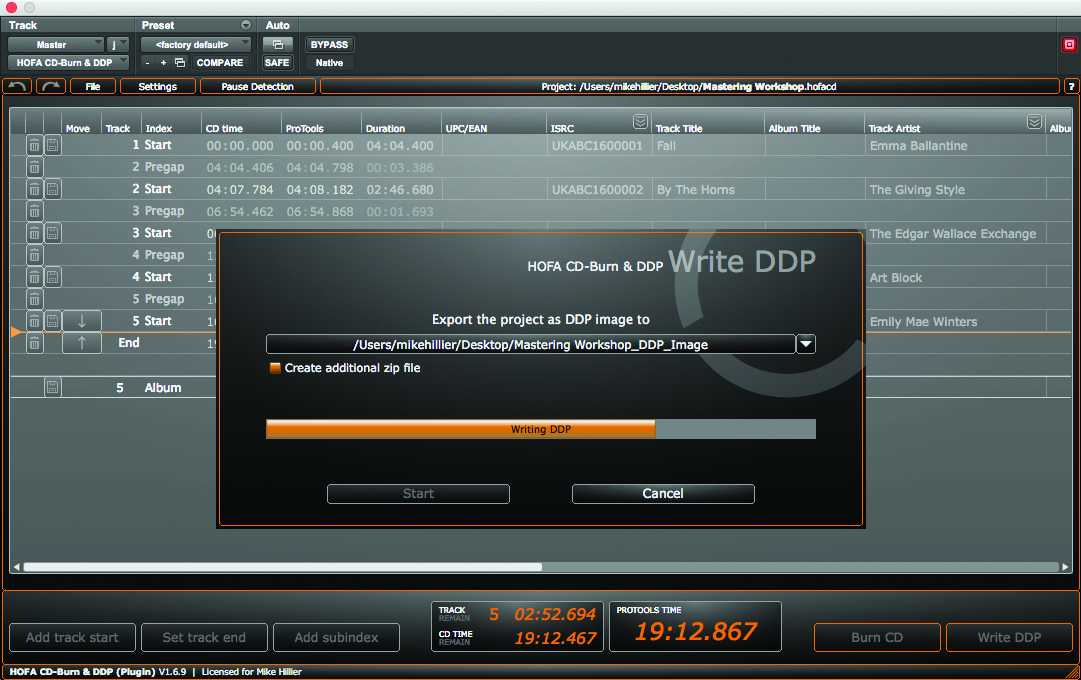 6: The final task left is to render the DDP to a folder and send it to the client.