We reach the mastering stage of our Power User series so it’s time to guide you through the final fence to pro-sound glory! Tim Hallas is the Cubase master… Mastering is a fine art and one that can make the difference between an amateur-sounding recording and something that sounds significantly more professional. For anything that […] 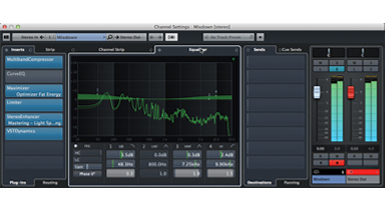 We reach the mastering stage of our Power User series so it’s time to guide you through the final fence to pro-sound glory! Tim Hallas is the Cubase master… 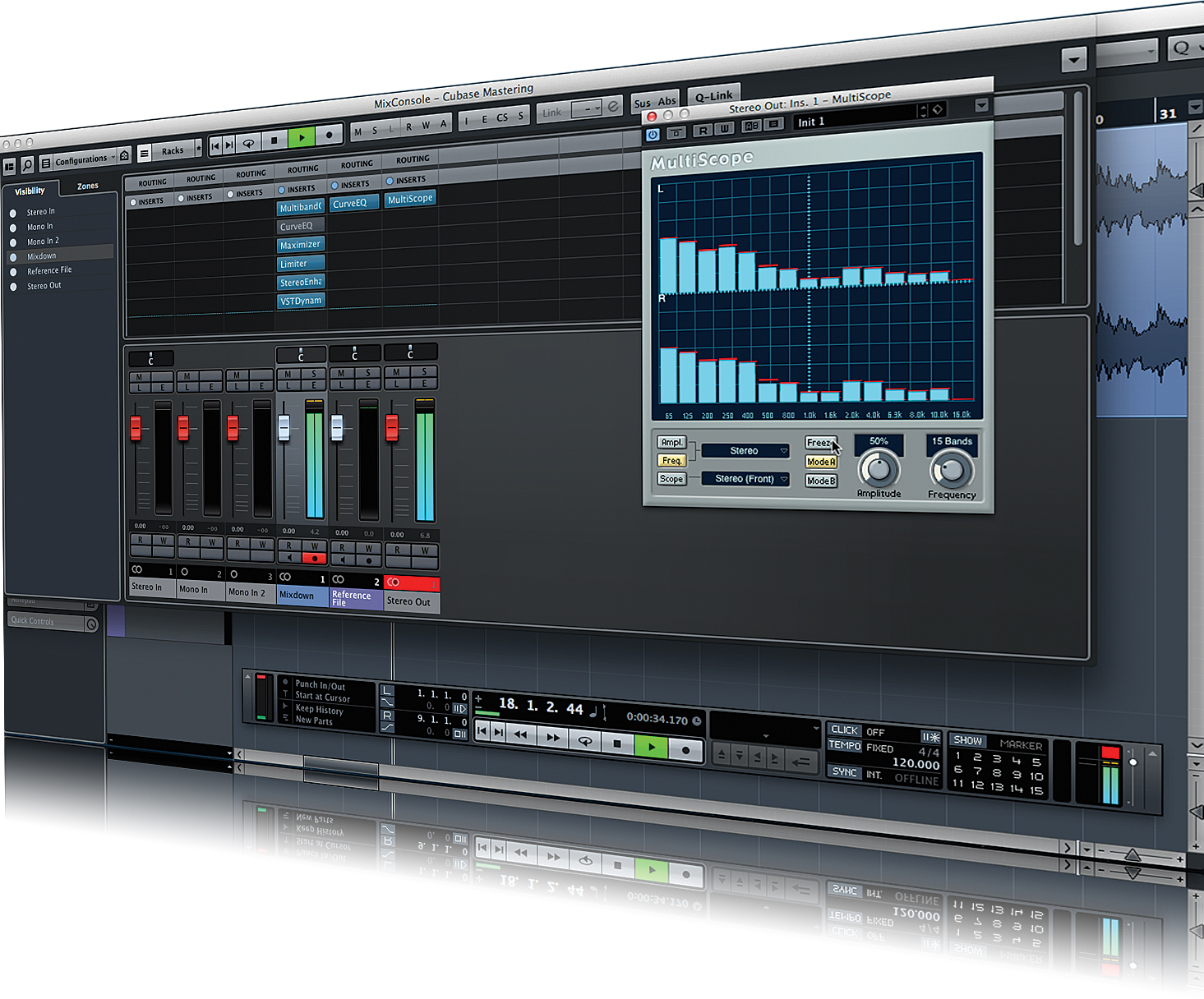 Mastering is a fine art and one that can make the difference between an amateur-sounding recording and something that sounds significantly more professional. For anything that is going to be released commercially I tend to get it mastered by a professional mastering engineer who has significantly nicer and more specialist equipment than I do in my home studio.

However, when working on smaller projects for smaller scale release or simply for my own amusement, I tend to master the projects myself within Cubase. Like other DAWs it has more than enough to work at this and higher mastering levels. In fact is has more including a Mastering preset in the Steinberg Hub window at the launch of the software. This loads some of the presets we’ll be discussing and has all the appropriate routing setup for you.

Following on from the rest of this series of articles where I’ve detailed everything from recording to mixing, you’ll need a stereo file of your projects for mastering. This is because it is easier to process it directly on a completed stereo file rather than trying to place it at the end of a complex signal chain. (Although, this may be OK when working on a track in isolation.)

With all of the completed tracks for the project in a single location it is worth loading all of these one at a time into the same Cubase project, as part of the mastering process is to find a ‘sound’ for the album, EP or song collection. With all of the songs in the same project they can be compared with one another or with a reference track that has a particular characteristic that you are trying to emulate with your project.

To load the files into Cubase – select File> Import Audio and select the relevant tracks from your computer. Cubase will ask you if you want them on the same track, to use existing tracks or if you want to place them on separate tracks. Select separate tracks and they should all line up in the Arrange window. Then solo the first track by pressing the ‘S’ button on the track header. You are now ready to add some processing… 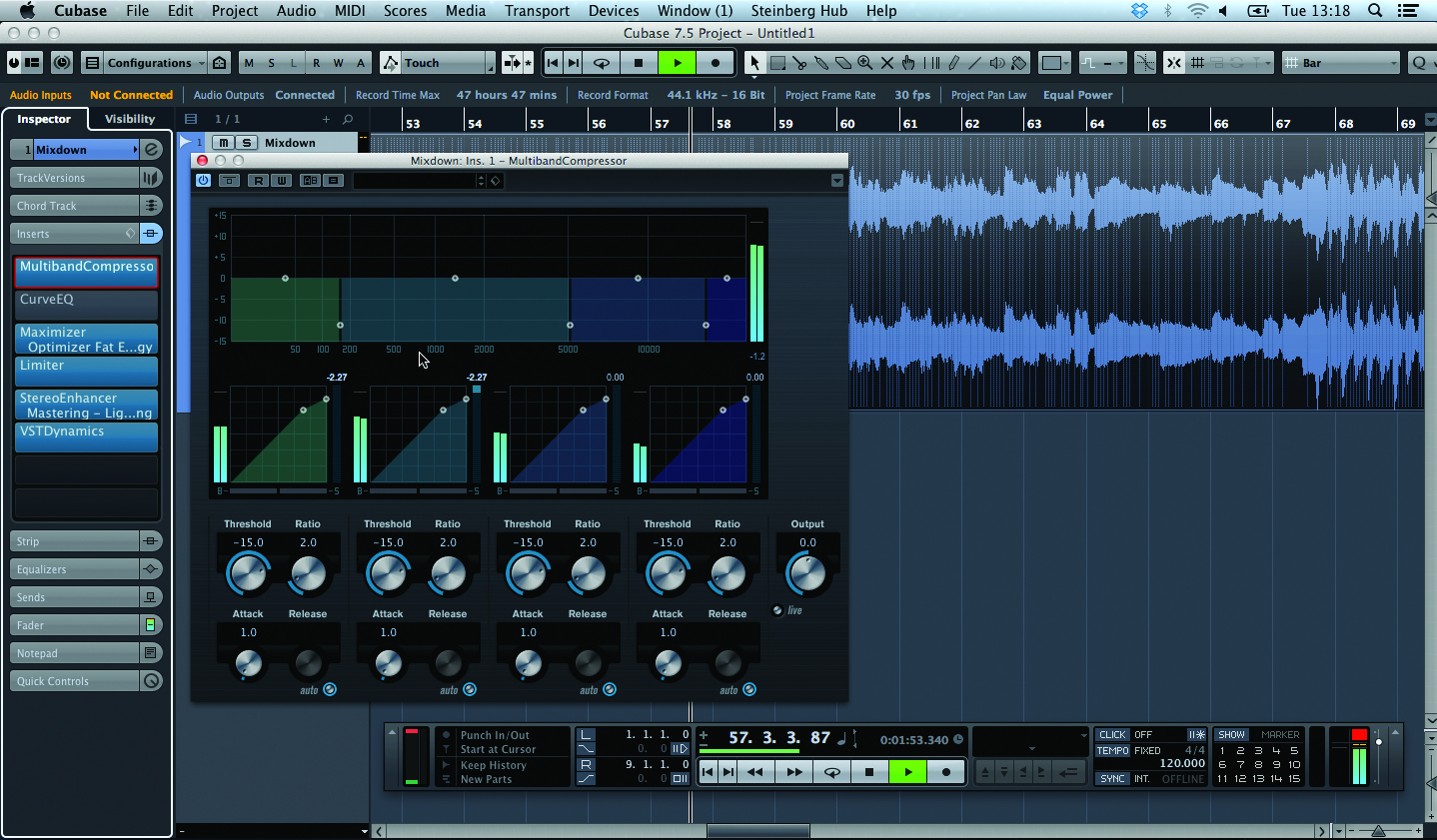 1: Cubase has an excellent multiband compressor and it is a great place to start for controlling some of the peaks within different frequency bands. To load this, select an empty Insert slot and find it via Dynamics Processing> Multiband Compressor and it will be placed on that channel. 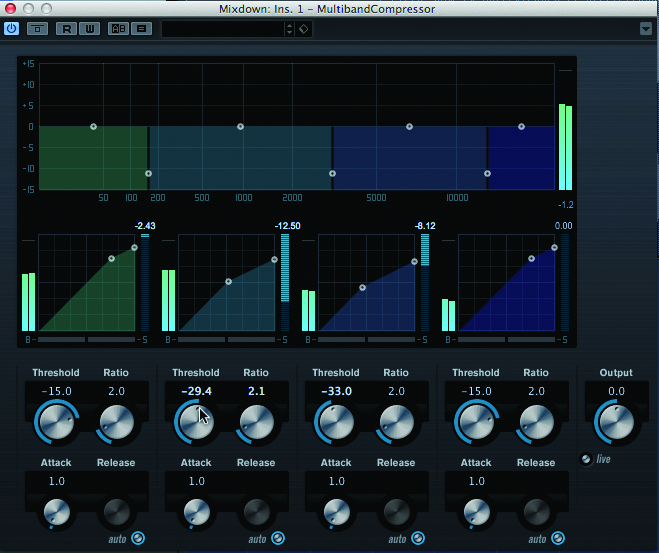 2: The default here is to have four bands of compression covering low, low-mid, high-mid and high, but these can be activated and de-activated by clicking on the power button for that band. Each of the bands works in the same way as any other compressor with the threshold and ratio controls and the attack and release affecting how quickly they respond. 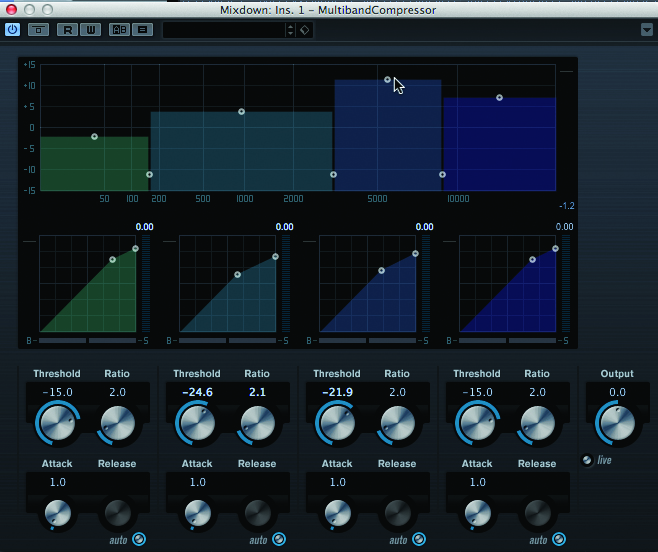 3: To change them simply move the sliders below the selected channel or move the bar in the graphical representation above. They can also be used to make broad volume changes if you’d like to highlight an area of sound within the mix post-compression by adjusting the gain control. Be careful with all the controls as we are looking to get good balance from the audio not remix it totally.

4: Each channel has a fully parametric EQ window and it can be opened by selecting the Edit window on your channel. Once opened it can be adjusted by the controls below the graphic display or by moving the curves around within the graphic representation. Both methods can be used in real time so that the processes can be heard as they happen.

5: With the EQ you should be listening for frequencies that are unnecessarily accented in the mix and use EQ to control them. Also it can be used to give nice overall touches such as a gentle loudness smile by using the shelf EQs at either end of the window raised slightly to give a warmth to the sound. This is a common process that can often be found on household stereos. 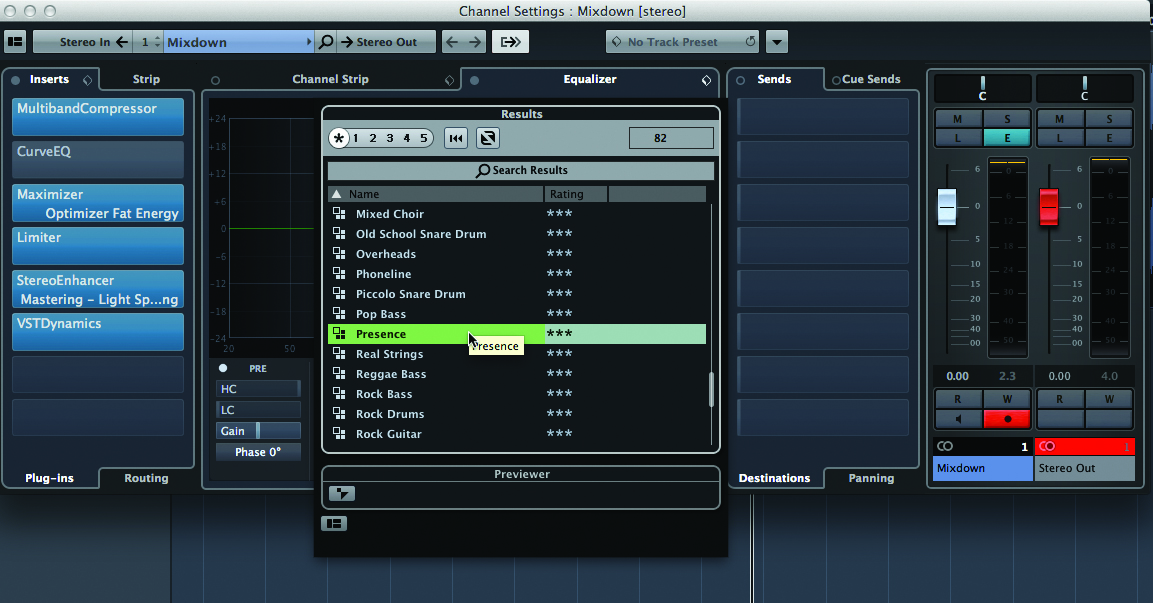 6: Both the EQ and multiband compressor have presets that are dedicated to mastering and can be adapted. Be careful when using these as they are very generic and will need some altering based on the level of your original recordings. In particular, the compressor will need the threshold and input gain adjusting to allow it to operate correctly. 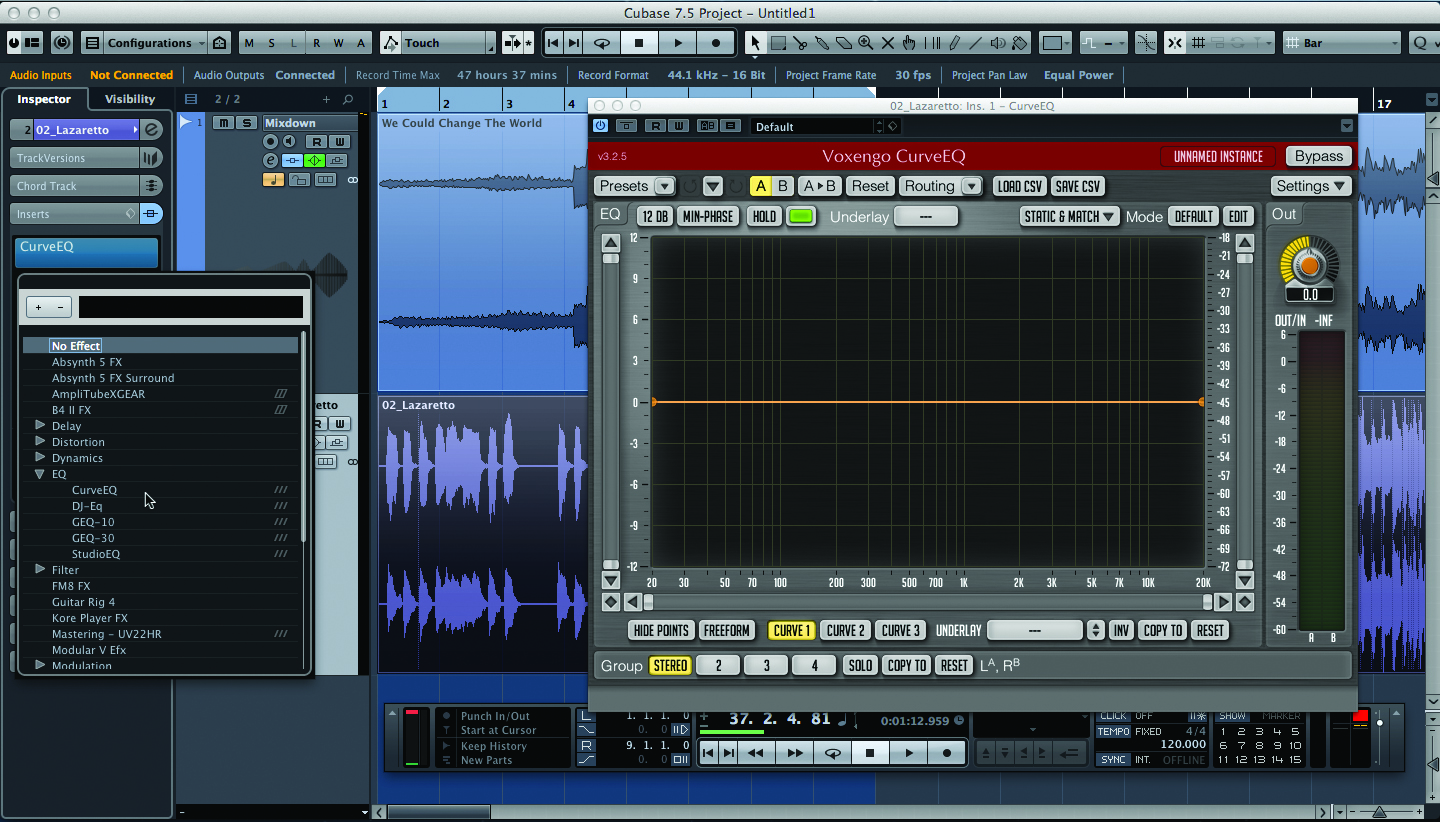 1: The Curve EQ plugin has a feature that allows you to analyse the EQ curve on an existing track and emulate it. Start by loading it from one of the empty insert slots on your channel. For this you will need a reference track to analyse – start by loading this into Cubase using the same process above. 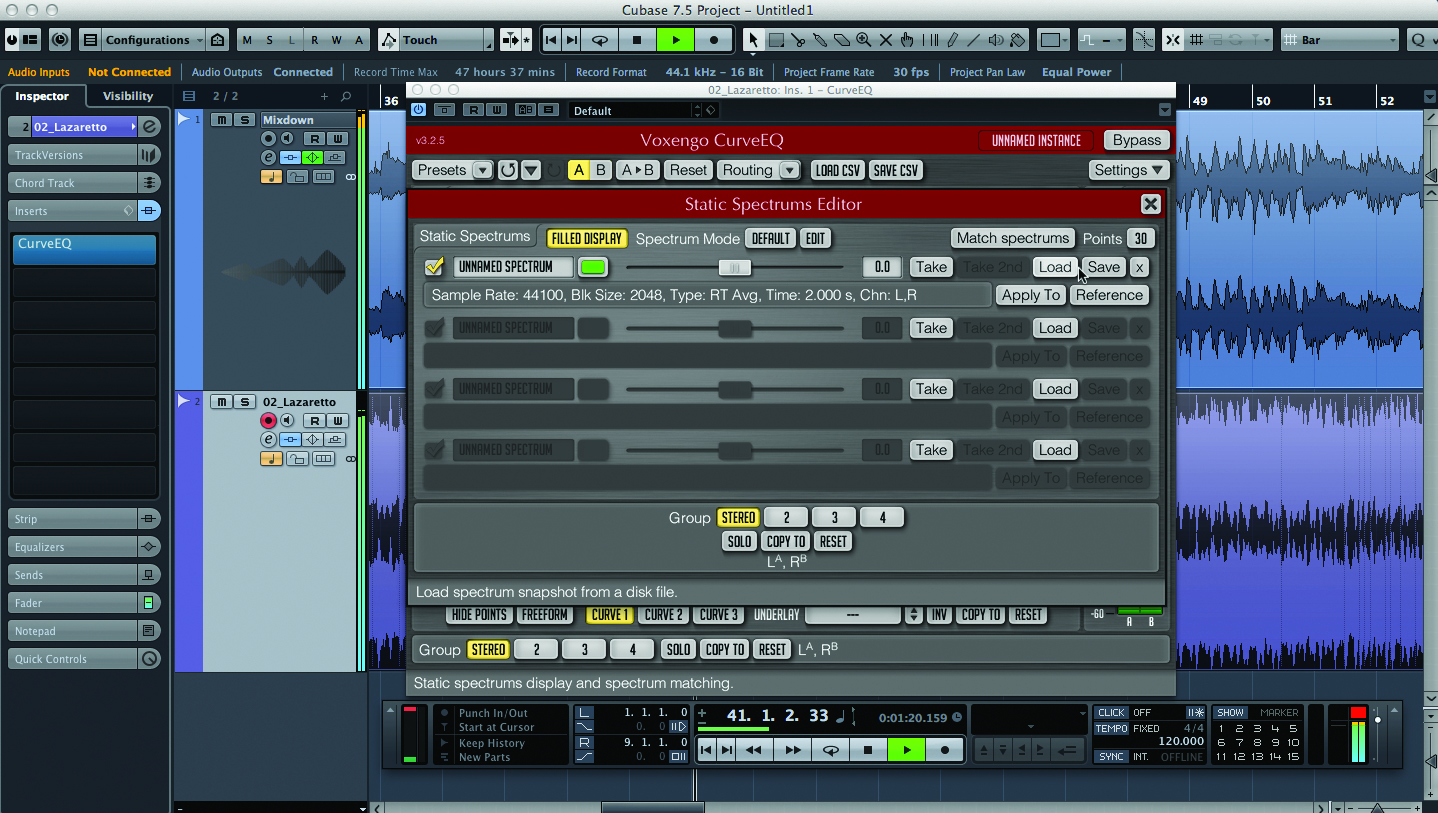 2: Once you have a reference track – load the Curve EQ plugin onto this track and create a sample EQ by selecting the Static & Match button. In this window click on the Take button that takes a snapshot of the EQ curve that has been applied to it. Repeat this process with the file you want to apply the EQ curve to and save both snapshots somewhere sensible. 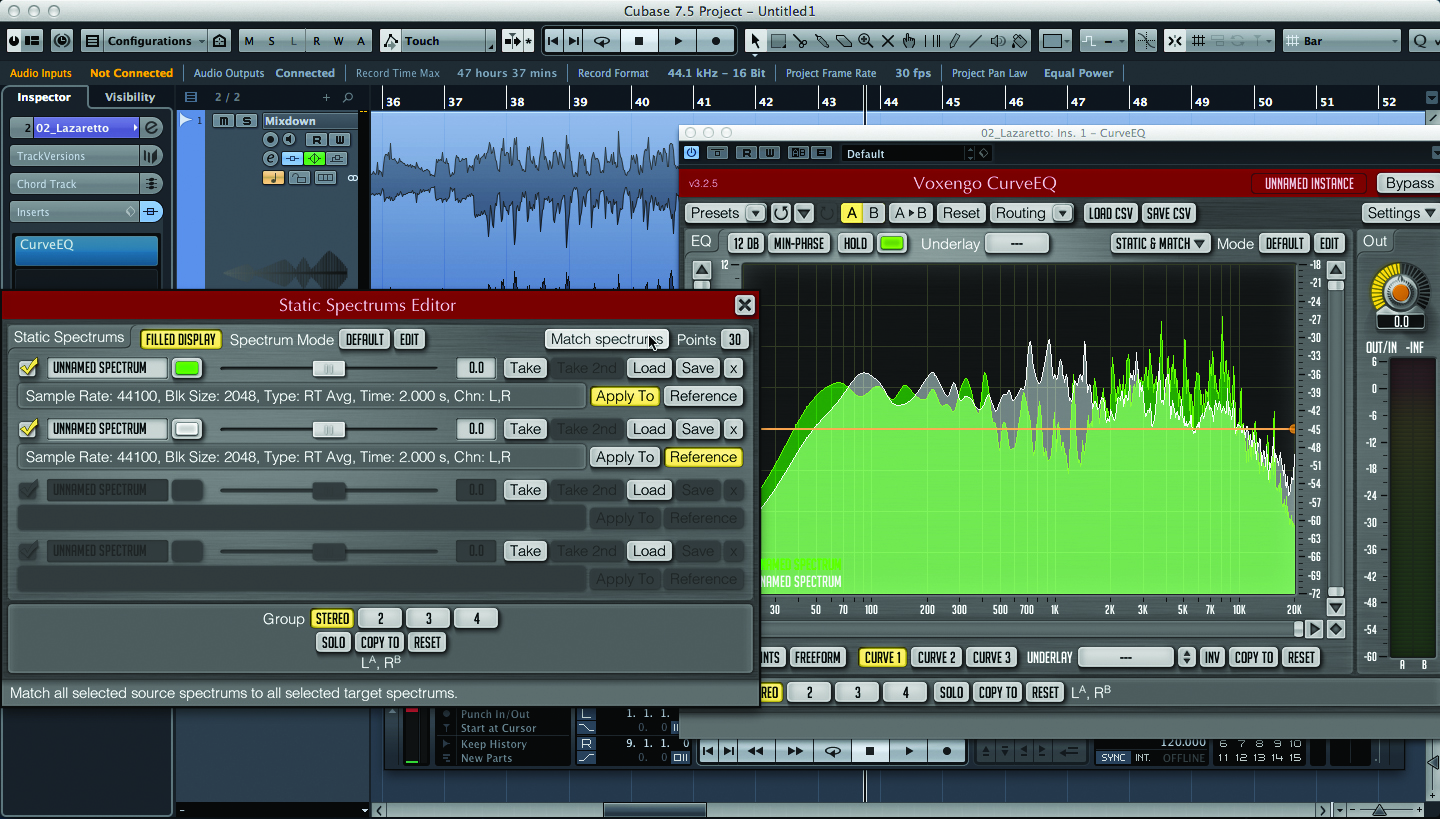 3: Once snapshots have been captured they need to be loaded on to the track that they will be applied to. This can be done by loading them from the Static & Match window by pressing the Load button and locating the saved files. Then select one as the Reference file and one to Apply To – then press the Match Spectrums button and a complete comparison of the EQ curves will be done. 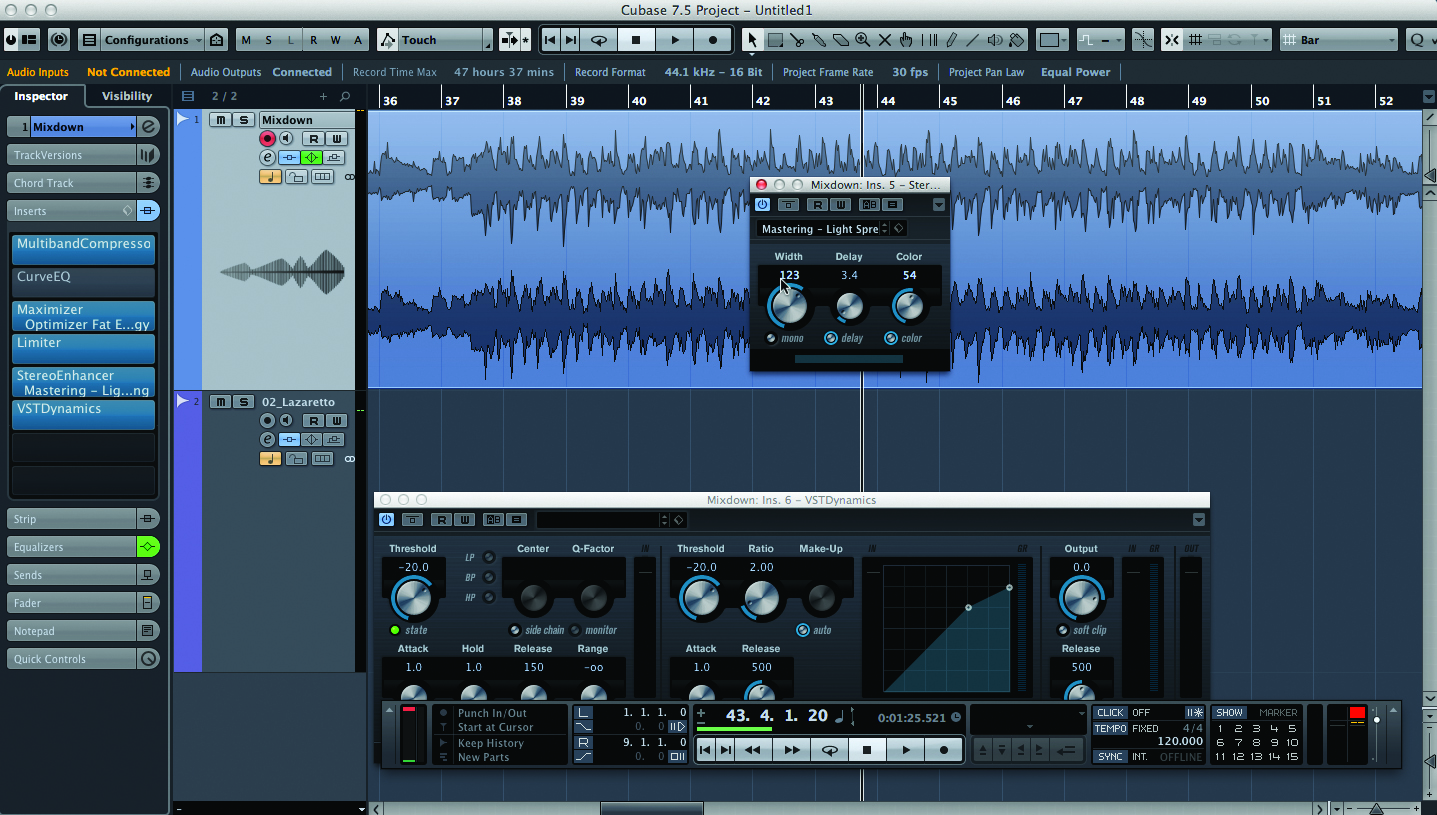 4: There is also a stereo image enhancer that will widen the stereo field of a given recording. These normally work by making the bass frequencies more mono and the treble frequencies wider. Within Cubase there are only three controls and the one to focus on is the ‘Amount’ as this will affect how wide it goes. Although there are presets it is, again, best to use your ears. 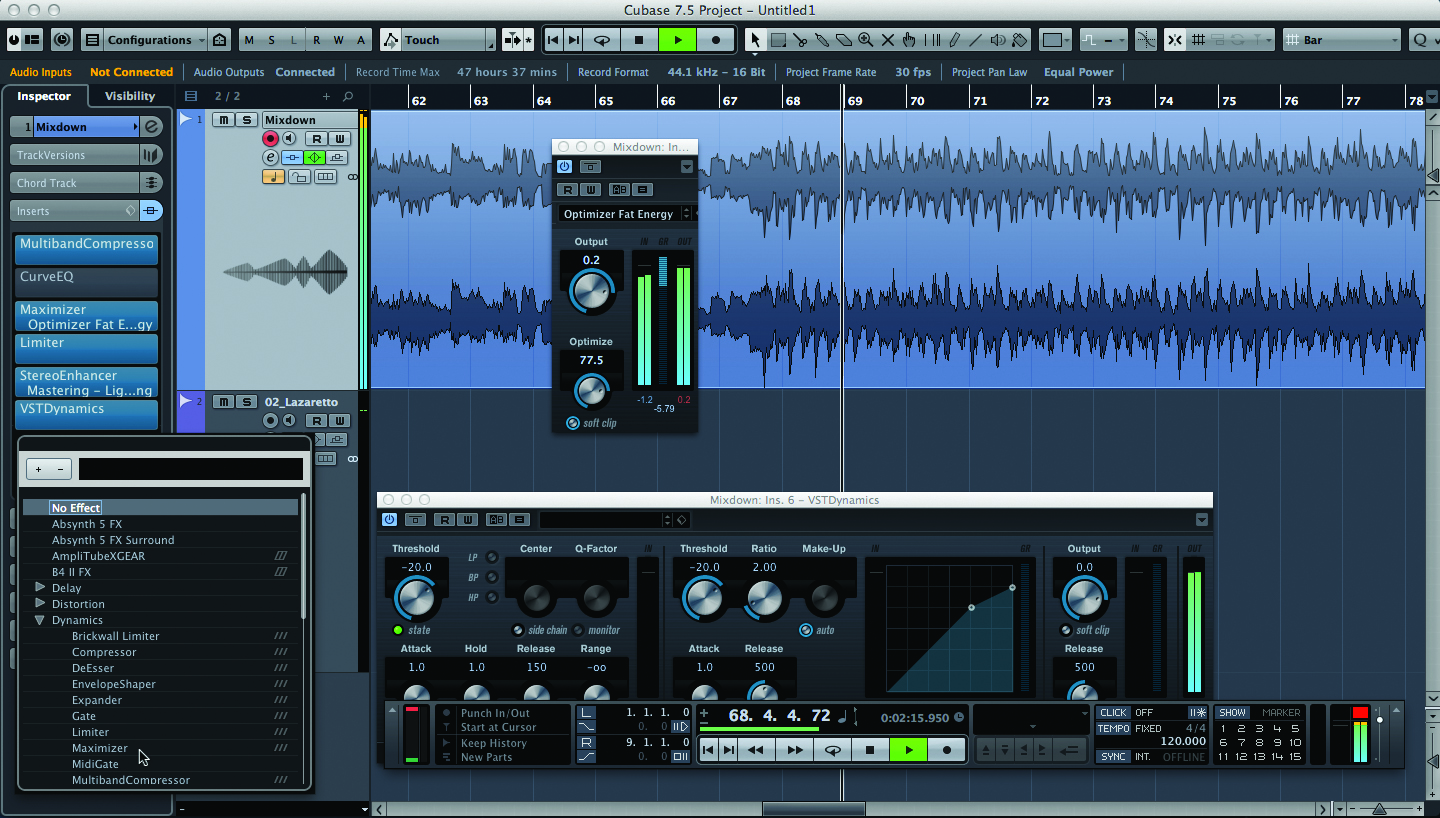 5: Some mastering suites include a Maximizer, and Cubase is no exception. Personally I don’t use one, but it is there if you want it and can be found in Inserts> Dynamics Processing and has very basic controls. The input and output levels are self-explanatory and the ‘Optimize’ control affects how harsh the processing is. The default setting is quite gentle and adds a little warmth to the sound. 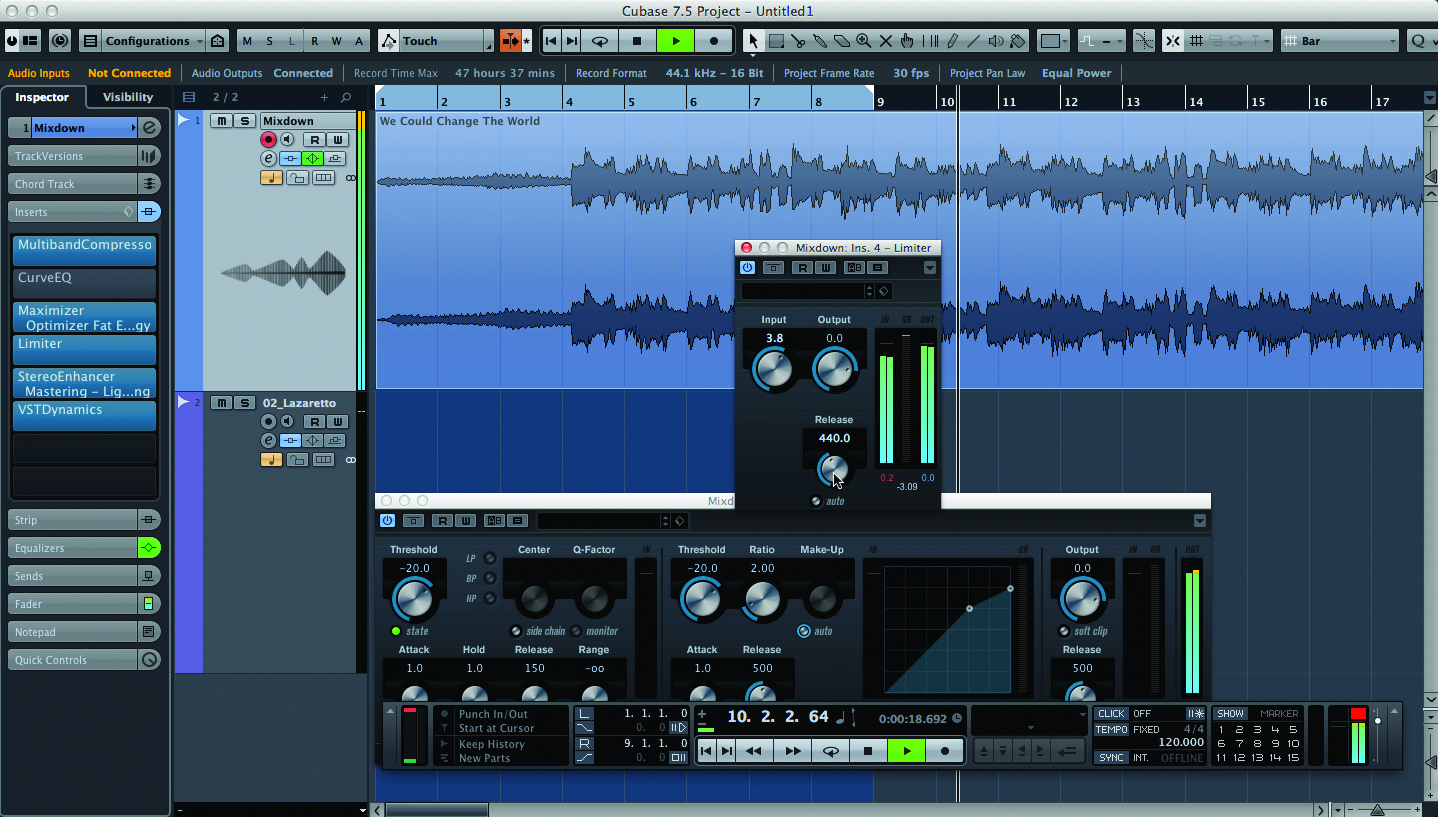 6: To add a limiter at the end of the chain this can again be found in Inserts> Dynamics Processing and it has equally simple controls with an Input and Output gain and a release time. The release time will depend on your style of music, but the 500ms default is a good place to start and then can be adjusted aurally.