Master the New Features in Reason 10.2

Propellerhead Software has announced Reason 10.2, with a raft of workflow improvements to will help you produce faster. Andy Jones assesses its merits Propellerhead  Software has always been among the most active of music production software developers, constantly updating and refining Reason, but seems to have been on the caffeine of late. Reason 9.5’s inclusion […] 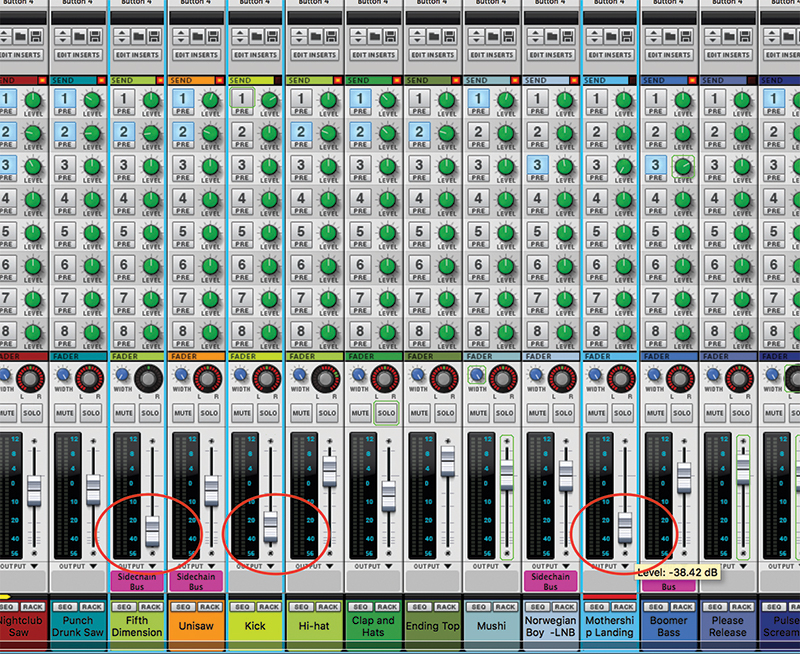 Propellerhead Software has announced Reason 10.2, with a raft of workflow improvements to will help you produce faster. Andy Jones assesses its merits 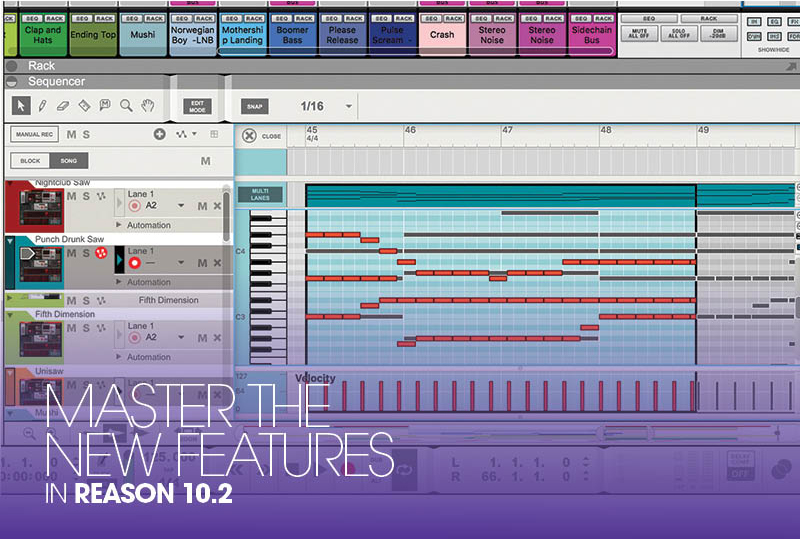 Propellerhead  Software has always been among the most active of music production software developers, constantly updating and refining Reason, but seems to have been on the caffeine of late. Reason 9.5’s inclusion of VST compatibility was such big news that it feels like it only happened yesterday.

Then Reason 10 came along mere months ago with its extra sounds, instruments and the rather great Europa synth. ‘Reason 9.5 newcomers might still be gorging on all of those VSTs to even notice v10 is here!’ we joked before concluding: ‘Reason 10 gives the DAW a nicely rounded set of fresh beats, electronic extremes, acoustic sounds and experimental dreams. You want more? You got it.’

So the fact that we have another point update, Reason 10.2, to introduce already, is perhaps not unexpected news – it’s days since the last one after all! And even though it’s only nudged up by a couple of points (why not, 3, or .4?) there’s still a significant number of new features to talk about, hence this workshop.

While the big news is usually saved for the point or half point updates, it’s the workflow stuff – which perhaps doesn’t grab the headlines – that tends to get overhauled in these smaller kinds of updates. However, it’s also the super-fast workflow in Reason that has given it such a loyal and passionate following. Reason still remains one of the fastest – if not the fastest – pieces of music production software around to turn musical ideas into a reality.

Many DAWs that get layers and layers of new features added on each update tend to get more flabby and harder to use. But thanks to The Props’s update cycle of ‘add features, add instruments, add workflow improvements’ the software thankfully remains as slick to use as ever. So let’s take a look at what’s new in 10.2…

We’re going to speed you up

The first of the updates in Reason 10.2 is View And Edit MIDI Across Multiple Lanes and it’s the one that makes you think ‘why doesn’t everyone do this?’ or indeed ‘why hasn’t this been done before?’ You know the situation. You are editing within one MIDI note event, altering the chord structure or melody, or even just the odd single note here and there.

Once finished, you then you have to exit and enter another MIDI note event to then change the corresponding notes to match the new key or progression. Not any more! Simply drag across multiple events, Hit Edit Mode and all the notes from all the events are shown on the piano grid with different colours indicating different tracks. It’s then easy to edit multiple tracks within a single window. Now you can change that bassline at the same time as you change the lead line. Easy!

Adjust Multiple Faders is a new feature that does what it says on the tin. It’s like grouping sounds together in a subgroup and adjusting all of their levels with on drag of the mouse, except you don’t have to set any subgroups up, you simply click on the tracks you want to group and then adjust levels.

Snap To Adaptive Grid is a useful feature that some other DAW owners have been enjoying for some time so probably a much-requested feature. The Adaptive Grid option allows you to zoom in and out of your bars and beats and for the divisions for snapping and quantising to increase as you do, giving you much finer editing as you go in.

So you might start at 1/1 and as you zoom in it goes to four beats to the bar, then eight, 16, 32 and so on. You can very quickly zoom in, make a precise edit and move out again, the grid adapting to your needs as you go. Snap To Adaptive Grid also means that as you zoom in, your notes automatically lock to these increased divisions, making accurate note placement extremely easy.

Devices, inside and out

Next up we have a few features for adjusting Reason devices, both within the software and external controllers. There are new Add Device buttons so you can now quickly add tracks in the sequencer or devices in the rack, or vice versa.

OK, this really might seem to be just another way of doing something you can already do – by dragging devices in, for example – but if you think how many times you do this in Reason, add it all up and you’ll probably save a bunch of time in the long run simply by having this added flexibility.

Finally, we’ll quickly touch on the new Easy MIDI Inputs feature that simply helps you get up and running with your external MIDI controller more quickly.

Next time, we’re getting back up to speed with some more Reason sound design, setting up some more Combinator examples for some very specific sound design tasks. See you then! 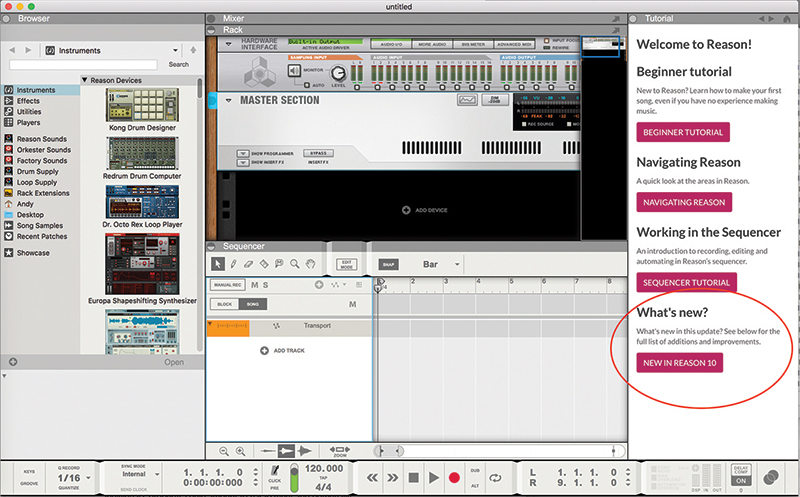 1. Download the latest 10.2 version of Reason from the Props’ website. On opening it up, the new Tutorial tab opens. Click bottom right for all the instrument updates in Reason 10 and the workflow updates in 10.2. 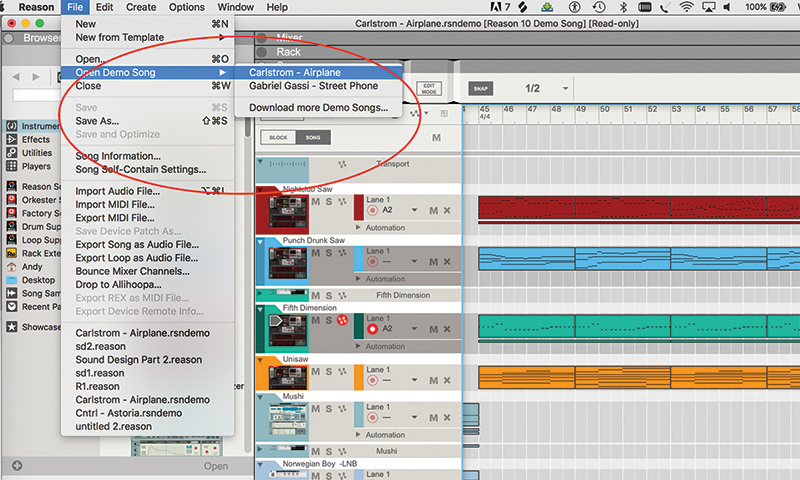 2. For the sake of this tutorial we’re going to run you through the updates in v10.2 using one of Reason’s demo songs (Airplane). Load it in and for the first new feature, navigate along to where multiple MIDI tracks are playing. 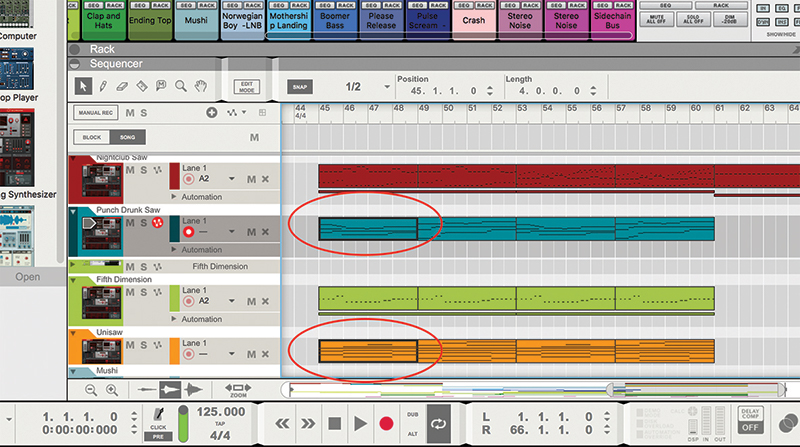 3. You can now view and edit MIDI notes across multiple lanes. Reason’s tutorial states that you Control>click each but on a Mac it’s Shift>click on each of the MIDI parts you want to open (as shown in the orange and blue). 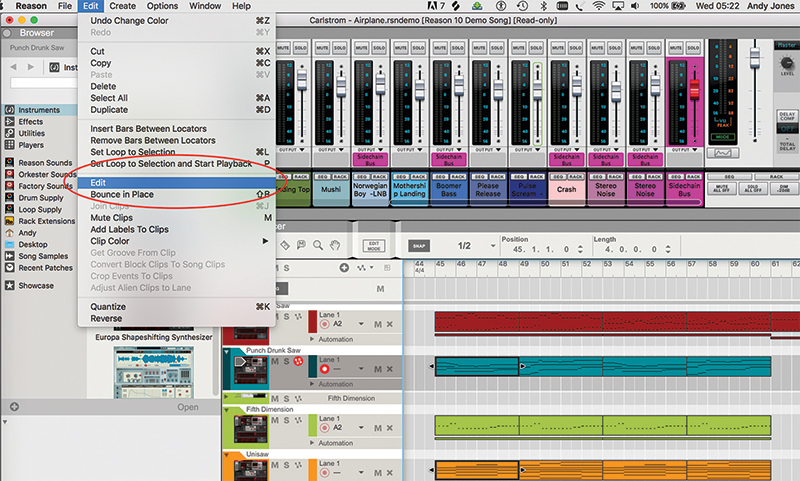 4. Double-clicking here will only open one part so you’ll need to either Cntl>click a part to open the Edit menu, go up to the Edit menu (as shown) and then select Edit, or simply hit the Edit Mode button. 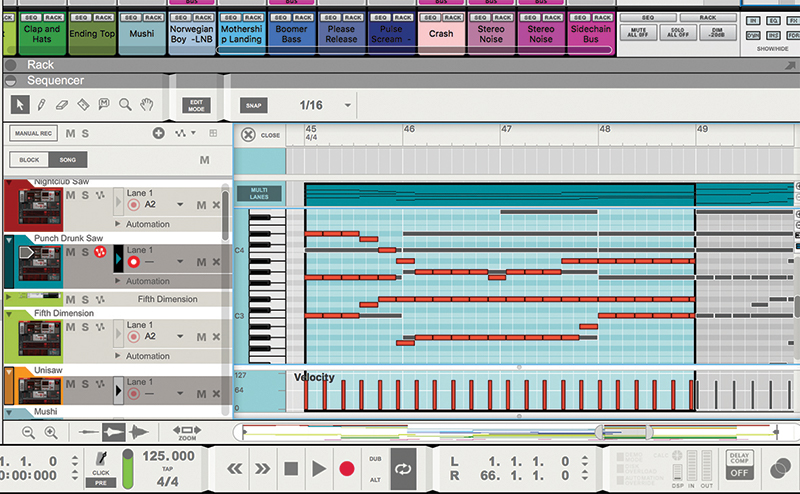 5. Choose either option and select Edit and now a single Edit window will display all of the tracks in one. We’re using the Beta of 10.2 and only two colours are shown – red and black.

One new addition to Reason 10.2 is the inclusion of a couple of extra Add Devices buttons. Simple stuff, you might say, but they enable you to add devices from the Sequencer and tracks from the Rack and vice versa. It’s simply increasing your options and saving time. 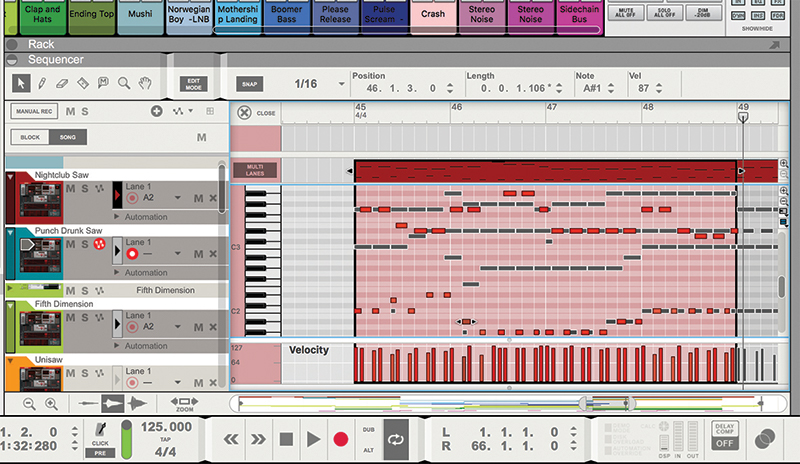 6. Here we have four tracks open. As you select each part to edit, you will hear the different sound and that part will then turn red for editing while the others (not being edited) turn or remain black. 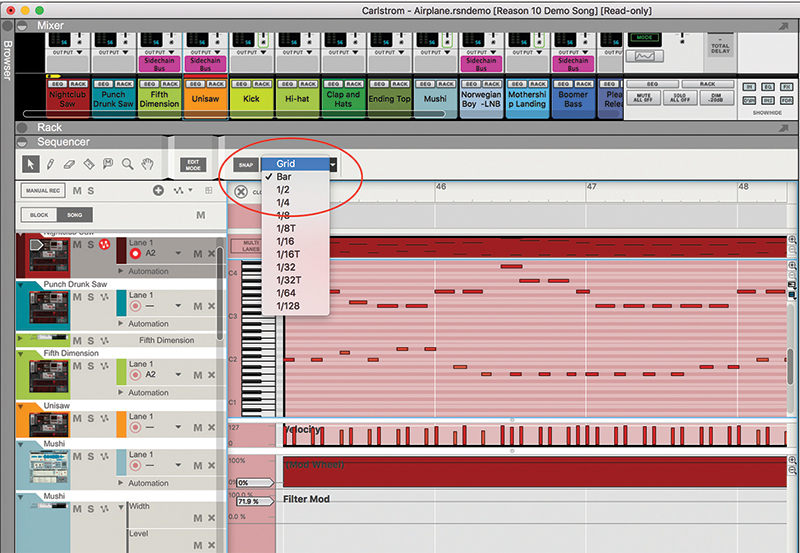 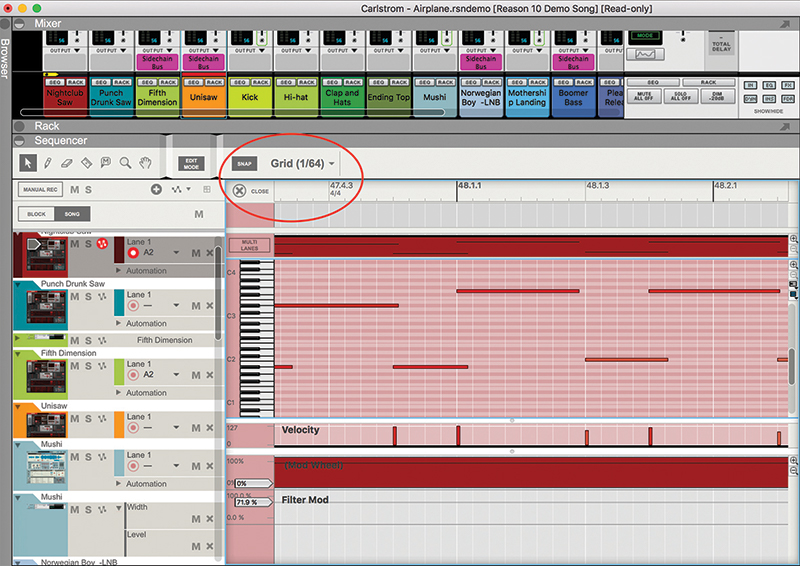 8. Now, as you zoom in on a part, the snap value automatically increases in resolution offering you fine placement of parts without manually having to change it. Here we’ve zoomed in halfway to a resolution of 1/64. 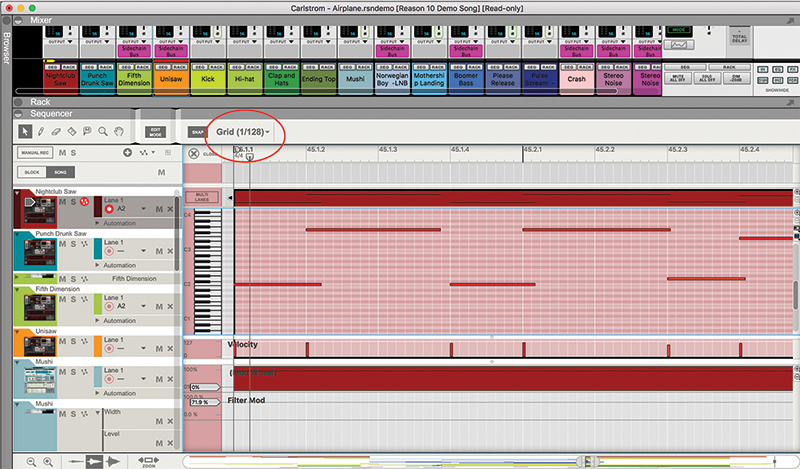 9. You can go right up to 1/128, that is a resolution of 128 parts per bar, or, as you zoom back out, this will go to a minimum resolution of a single bar. Simply click off the Grid option to your required resolution to cancel it. 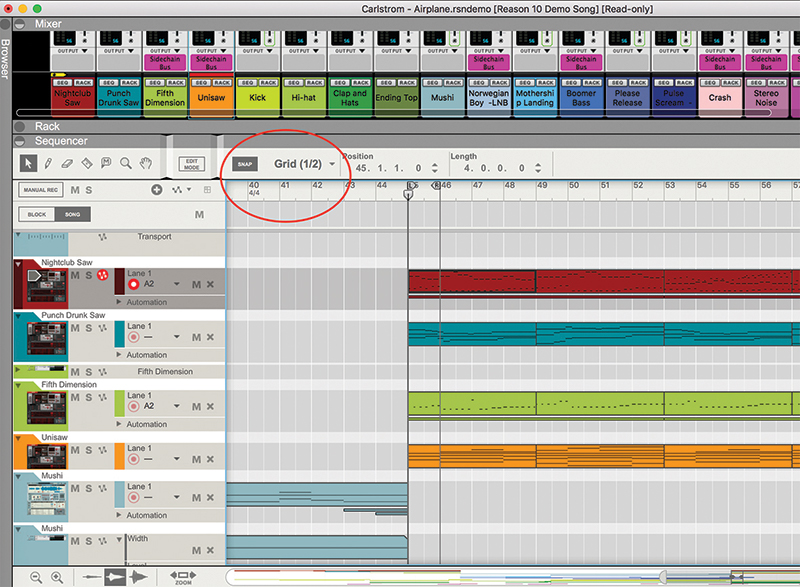 10. This automatic resolution feature not only works in Edit mode but also in the main Sequencer area so you can fine-tune audio or MIDI part placement very easily. 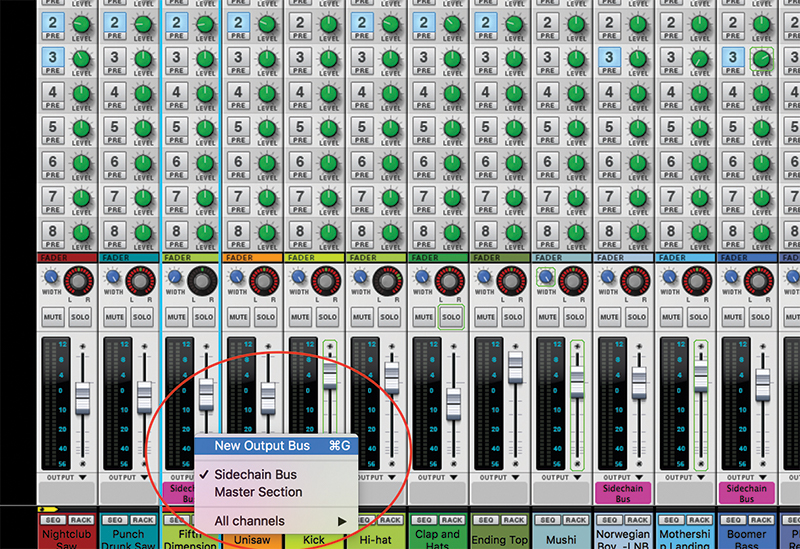 11. Setting up sub groups to make changes to multiple tracks simultaneously has been easy in Reason for a while – simply hit the Output option at the bottom of each track and select New Output Bus to set up a subgroup.

12. However, in Reason 10.2, if you want to adjust the volume of multiple tracks simultaneously you can now Command (Right)>click on the tracks, highlighting several. Here we’ve reduced the volume on three.

If you are completely new to Reason, then the Tutorials section explores the basics. There’s a Beginner tutorial, one on Navigating in Reason and another called Working in the Sequencer. Alternatively check out www.musictech.net for loads more Reason tutorials! 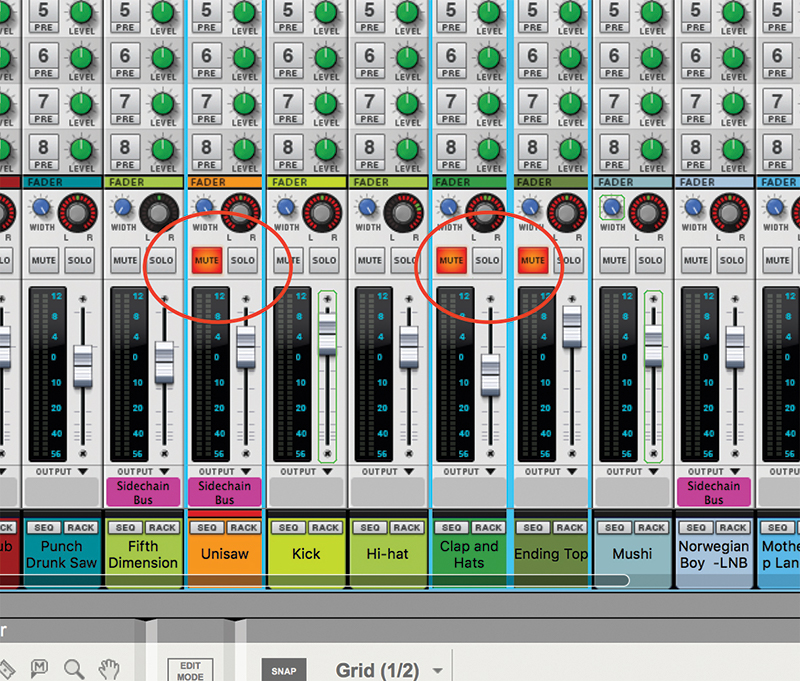 13. You can also use this feature to either mute several tracks at the same time or solo them. Again, simply use Command (right)>click. Here we’ve muted three tracks simultaneously. 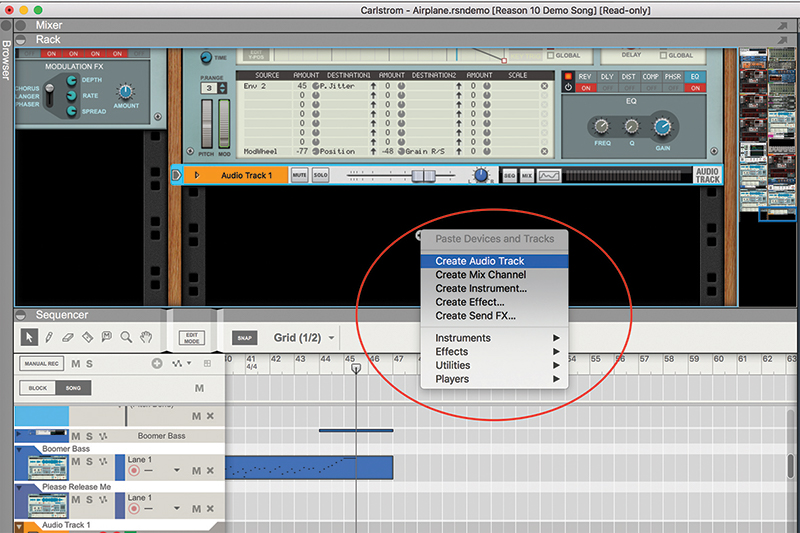 14. A couple of other useful extras in Reason 10.2 include extra Add Devices buttons. The first is in the Rack and enables you to add tracks and Mix Channels to the Sequencer or instruments and other devices to the Rack. 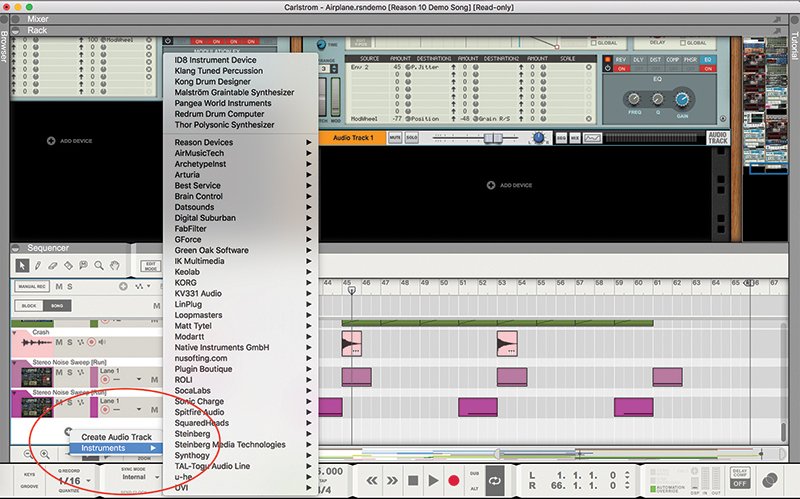 15. Conversely, you get one in the Sequencer too that lets you add instruments to the Rack or extra tracks and channels to the Sequencer. More ways to do things saves time in the long run! 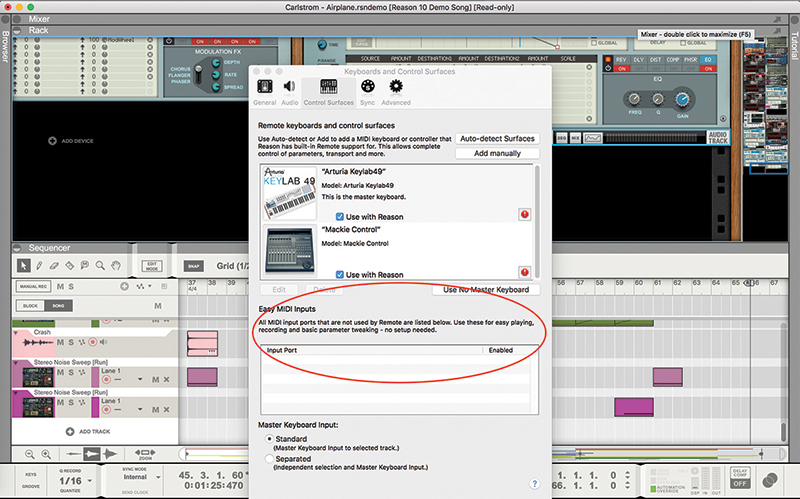 16. Easy MIDI inputs is a feature that saves time setting up Reason with external MIDI controllers. Setup is far more automatic to let you get controlling and tweaking right away. 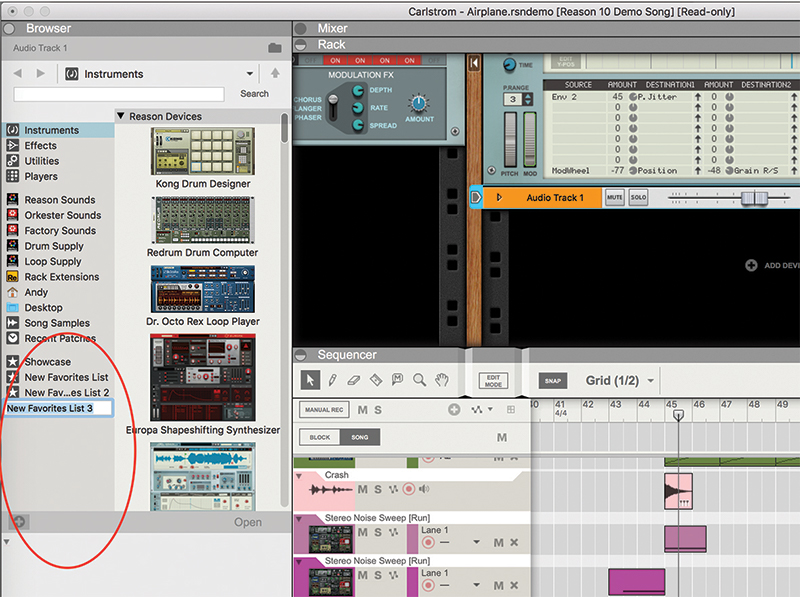 17. You can now also easily add Reason Devices to a favourites list – simply hit the + button to set up a new folder which will be named automatically, and then select devices for it. 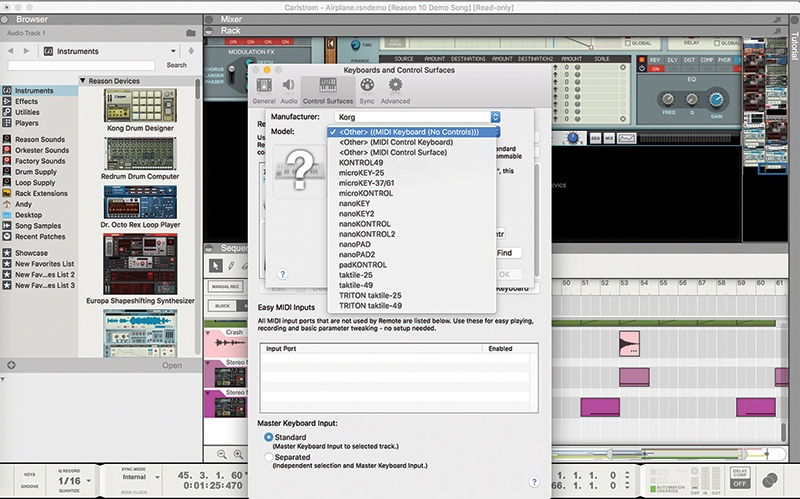 18. Last but not least, several more of such controllers have been added to the Reason controller list including models from Novation, Akai, and (shown) Korg. See you at Reason 10.3!