by MusicTech
PreSonus
#PreSonus Studio One

Making the most of the new features in Studio One 4

In case you didn’t know, there’s an all-new version of Studio One that has just been released as the software takes a mighty leap to version 4. Here you can find out about the brand new features and how to get the best from them… Presonus’ flagship Studio One DAW has just been upgraded to […]

In case you didn’t know, there’s an all-new version of Studio One that has just been released as the software takes a mighty leap to version 4. Here you can find out about the brand new features and how to get the best from them… 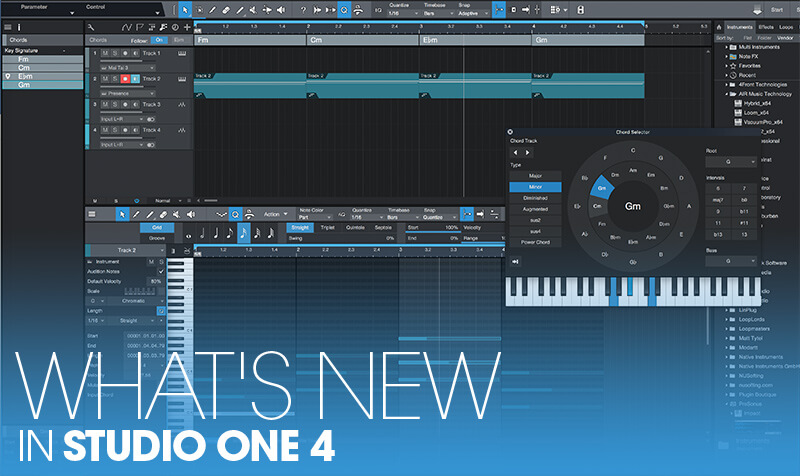 Presonus’ flagship Studio One DAW has just been upgraded to 4 (or version 4) so it is now called ‘Studio One 4’. Now this is a pretty big upgrade, not so much in how the software looks – it’s still as slick as ever – but this update is more about adding extras to help you make music faster, so includes more ‘flexible tools designed for creative musicians.’

These new tools are Chord Track, Impact XT and Sample One XT plus a new Drum and Pattern Editor. These really are the headline acts of the update, so we’re going to focus on them in this workshop. For a round up of some of the other updates and improvements in Studio One 4 check out our review which is coming soon…

First to Chord Track, probably the best addition to Studio One for the composer who wants to bring real harmony to their work. Essentially it allows you to make easy chord changes to MIDI data and, even more cleverly, to audio data as well. It can detect the chords from both MIDI and audio and apply those chords to either type as well.

In our example we take a simple MIDI chord that is triggering one of Studio One’s plug-in instruments. Adding a Chord Track allows you to set the chord using the Chord Selector tool, a neat feature that lets you set the chords by name or by type (minor, diminished and so on) at the touch of a button.

We show you how you can simply repeat one chord and produce a great progression pretty instantaneously and it’s a real help with composing when you might have started a great progression but you really don’t know where to go with it – simply load up a Chord Track and experiment with your options in Chord Selector. It’s also a great feature to use if you don’t know one chord from another – a few hours playing with this and you’ll be an expert!

The best bit comes when you use Chord Track with audio. We show you how an audio track can be loaded in and ‘forced’ to play along with the chord progression you produced for the MIDI progression. You’ll occasionally not get perfect results – we didn’t largely down to a pretty mad MIDI chord progression that we programmed – but, overall, this really is a fantastic feature for any composer.

XTra stuff The new Sample One XT sampler is an updated instrument and a very good one, now laid out like other newer plug-ins in Studio One like Presence XT, so you get toggable tabs at the bottom for the keyboard and two banks of effects. Sampling with Sample One XT couldn’t be any easier: simply select your input and hit record. You can then map, edit and affect the results with ease, using a great, adjustable waveform on the GUI.

The effects are the star of the show with Sample One XT – the distortion being a standout – and it’s very easy to quickly transform your raw samples into something very special. We also show you how easy it is to use Sample One XT to sample other instruments within the software. It’s a very cool addition.

Lastly we have a brief tour of Impact XT, the MPC-style drum pad instrument, again an update but a big improvement over the original Impact. You get eight banks of 16 kits with each pad fully editable with pitch, filter and gain options, and each with multiple velocity layers so you can trigger different samples depending on velocity – great for ‘proper’ percussion dynamics.

The display is similar to Sample One XT’s with some of the same sampling features and the plug-in ties in very well with Pattern Mode, another newcomer to Presonus Studio One. It’s a familiar drum and melodic sequencer that allows great beats and melodies to be played and recorded via Impact (or simply drawn in) and another welcome addition, among many, to Studio One 4.”

New to Presonus Studio One?

If you are completely new to Studio One, we have a whole new series on setting up and using Studio One here

What’s new in Presonus Studio One 4? 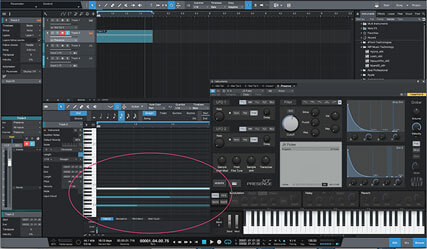 1. Chord Track is an excellent new feature that allows harmonisation of your chords. To give you a simple example of how to use it, we’ve got a single chord stretched over a bar – a MIDI track triggering the Presence Synth. 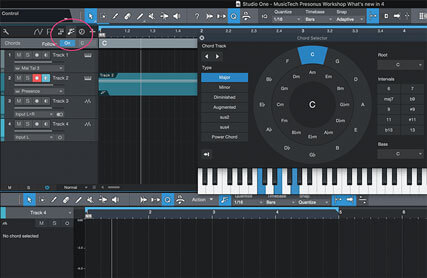 2. In order to select Chord Track, hit the Chord icon in the toolbar (third from right). You’ll see a grey Chord Track appear, currently with C, its default chord shown. Double click on this and the Chord Selector will appear. Now make sure that the Chord Follow option is selected in the Inspector area. 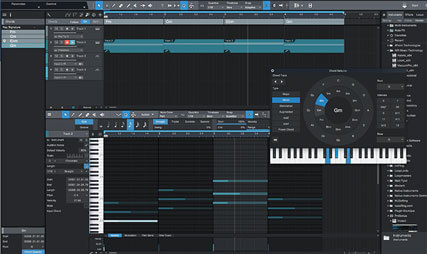 3. Now any changes you make to Chord Track will affect the MIDI part so you can change the chord at the touch of a button. We’ve repeated our chord three times and created a chord for each so used Chord Selector to create a complete progression – great for trying ideas out. 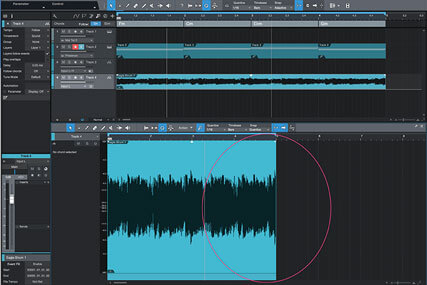 4. The real beauty is that this can apply to audio too so you can apply chords to audio of known or unknown chord types. Here we’ve loaded a guitar part from an old sample collection which we know little about and have time-stretched it to fit. 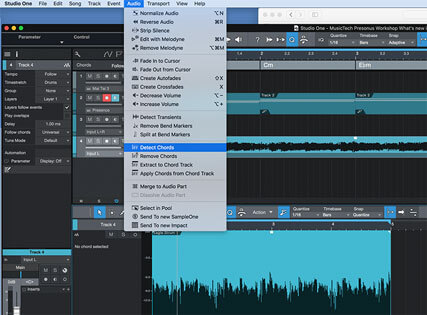 5. Select Detect Chords from the Audio drop down menu and the software pretty instantaneously detects the chord of the audio you have loaded in – it’s a wonderful feature indeed. But it gets even better… 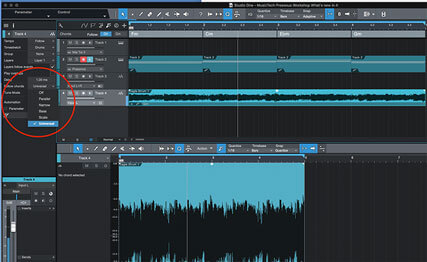 6.  Now you can ‘force’ the audio file you have loaded in to follow the MIDI chord progression we set up earlier in step 3. Simply select Chord Follow in the Inspector of the audio track and it will give it an instant go, in our case with varying results as it’s a wild progression! 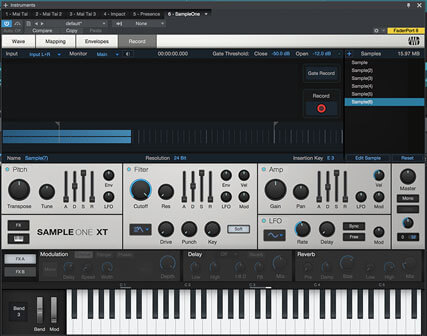 7. Sample One XT is another great addition to Studio One 4 and is a big update to the previous sampler. The big interface changes include the ability to toggle the keyboard and two big banks of effects including Modulation and Distortion similar to the GUI of Presence XT. 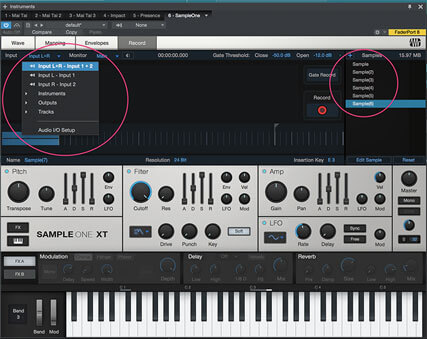 8. Sampling is simply a matter of using the new drop down tab menus to select an input source and hitting record. Here we’re simply using the computer’s built-in mic (left) to record some speech. The recorded samples are shown in the list to the right. 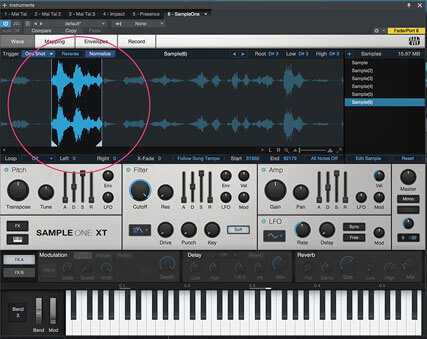 9. Once the sampling is complete, hit the Wave tab to see the results. You can easily perform cuts and other edits and try the on-board effects to really shape your sound. Try the distortion under the FXB section – it’s pretty special. 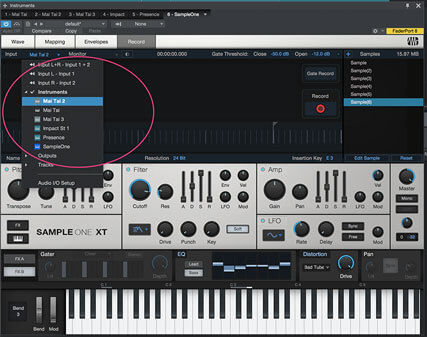 10 . One other very neat new feature on Sample One XT is the ability to sample from any instrument within Studio One. Simply hit the Input drop down menu and select an active instrument, in this case the rather great Mai Tai synth. 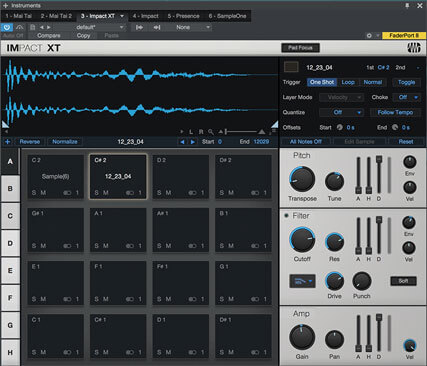 11. Impact One XT is a great new MPC-style percussion and beat sampler/player. It has 16 editable pads and a great GUI so you can get in and edit samples. You can easily load different kits and layers of samples in it too. 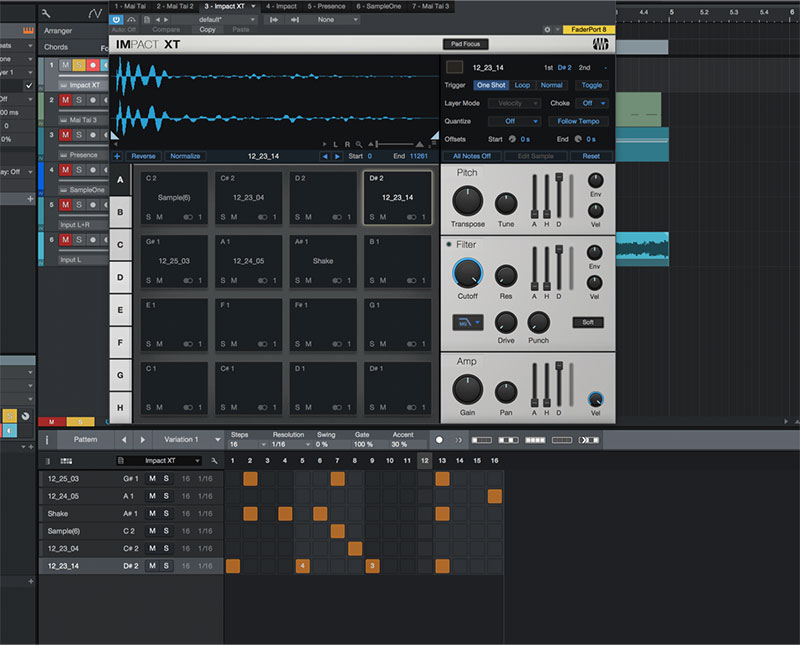 12. It works especially well combined with the Pattern Mode which is one of the other new features in Studio One 4. It’s a simple but very effective way of creating melodic loops and beats with lots of flexibility. Check out more on the new Pattern Mode editor in the MusicTech review.