Part 2 of Our first Logic Pro X Tutorial – in this part we take a look at the capabilities of Drummer     1: Given its complex interactive control set, Drummer works outside of the usual virtual instruments system, instead using its own form of track. To start working with Drummer, therefore, use the […] 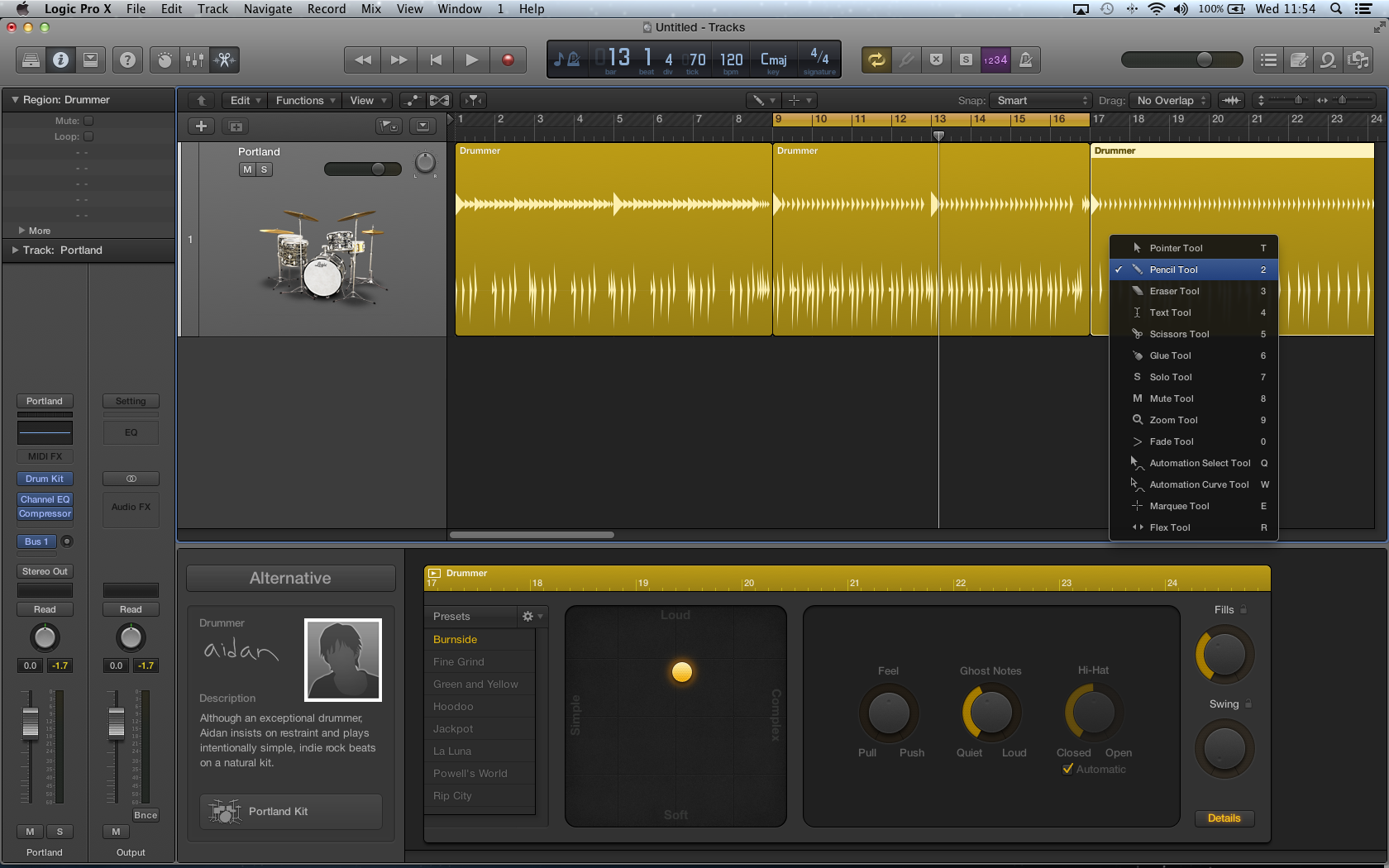 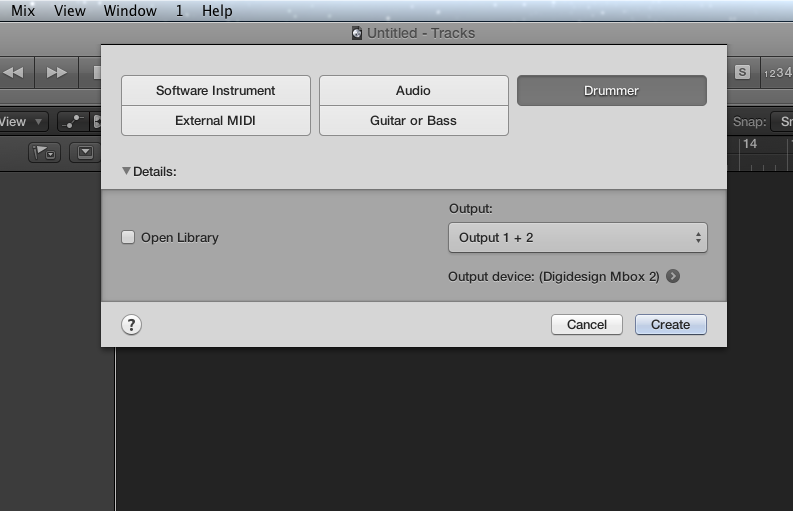 1: Given its complex interactive control set, Drummer works outside of the usual virtual instruments system, instead using its own form of track. To start working with Drummer, therefore, use the New Track command (Track>New Tracks) and click on the Drummer option. Logic will then instantiate the Drum Kit Designer instrument and create some default regions for you to work with. 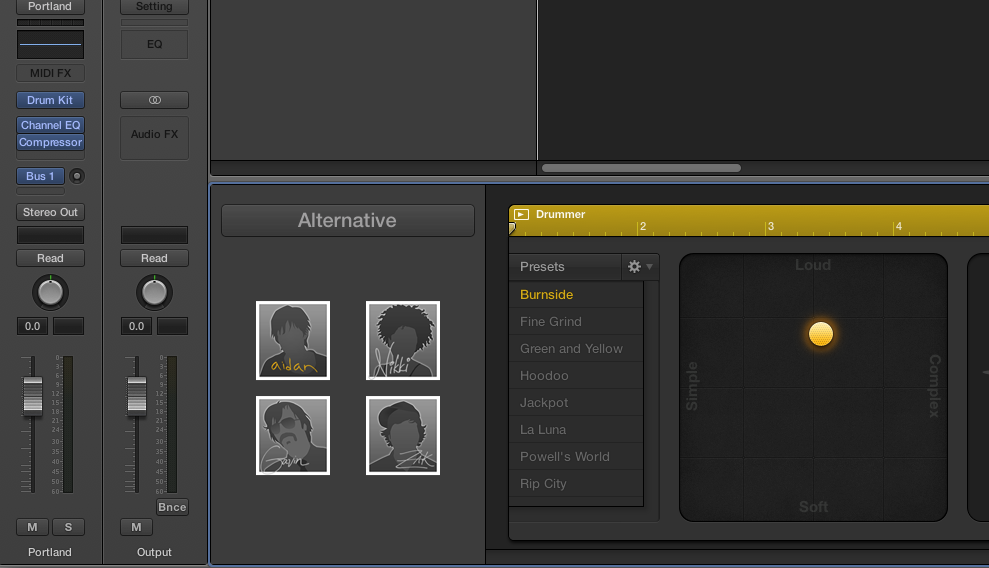 2: The key musical properties of your drum track are defined by your choice of Genre, and from within that, the particular drummer you choose. The Genre can be selected from the Genre pop-up menu, where you can choose between Rock, Alternative, Songwriter and R&B. The choice of Drummer then selects a kit and overarching style to the playing, which you then adapt as appropriate. 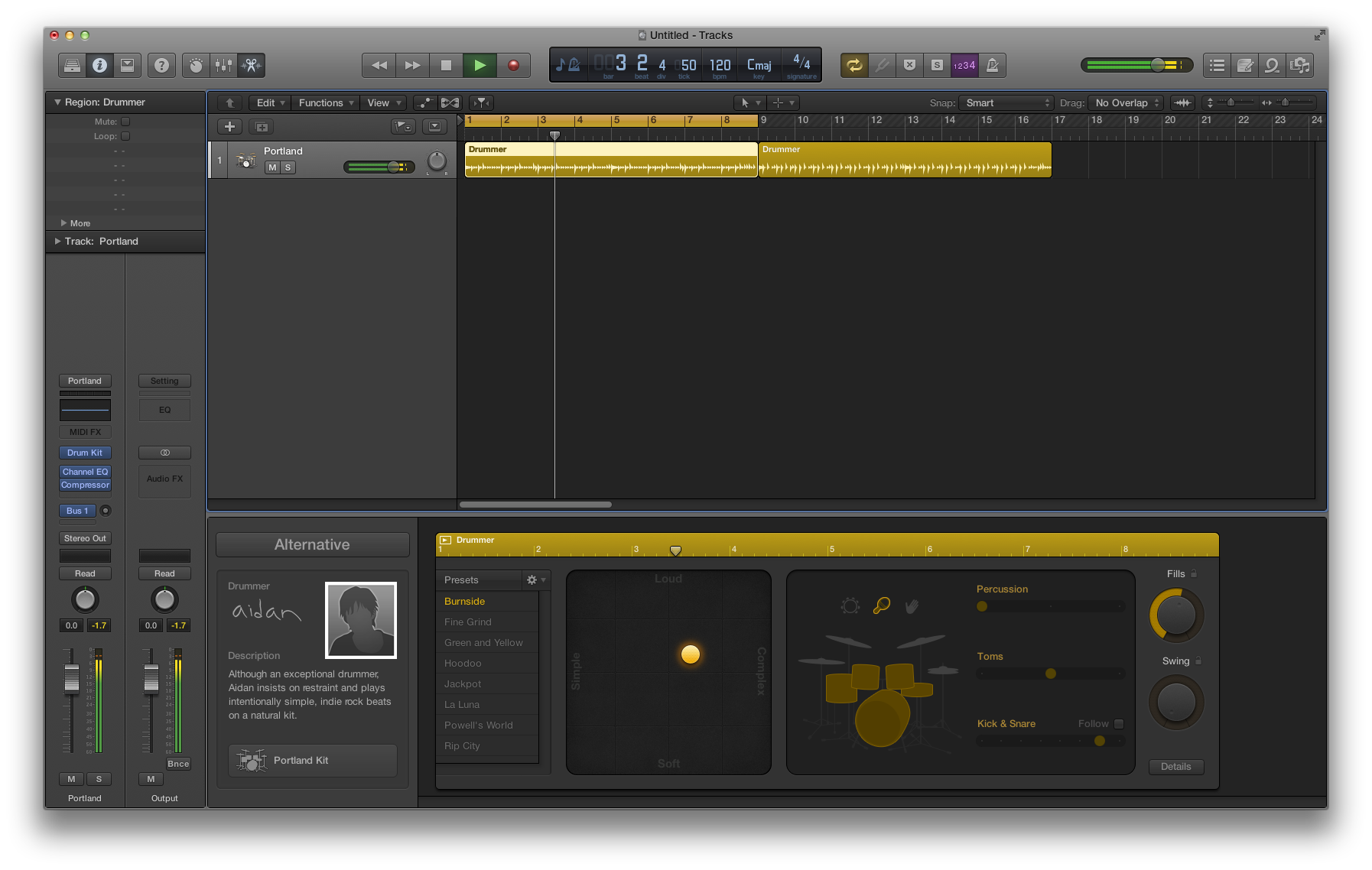 3: Using the Drummer Editor you can start to fine-tune the performance that the Drummer is currently delivering. The XY pad, for example, lets you define the complexity and loudness of the pattern – in many cases changing the actual sounds used as well as the respective velocity. Clicking on the kit elements brings them in and out of the performance. 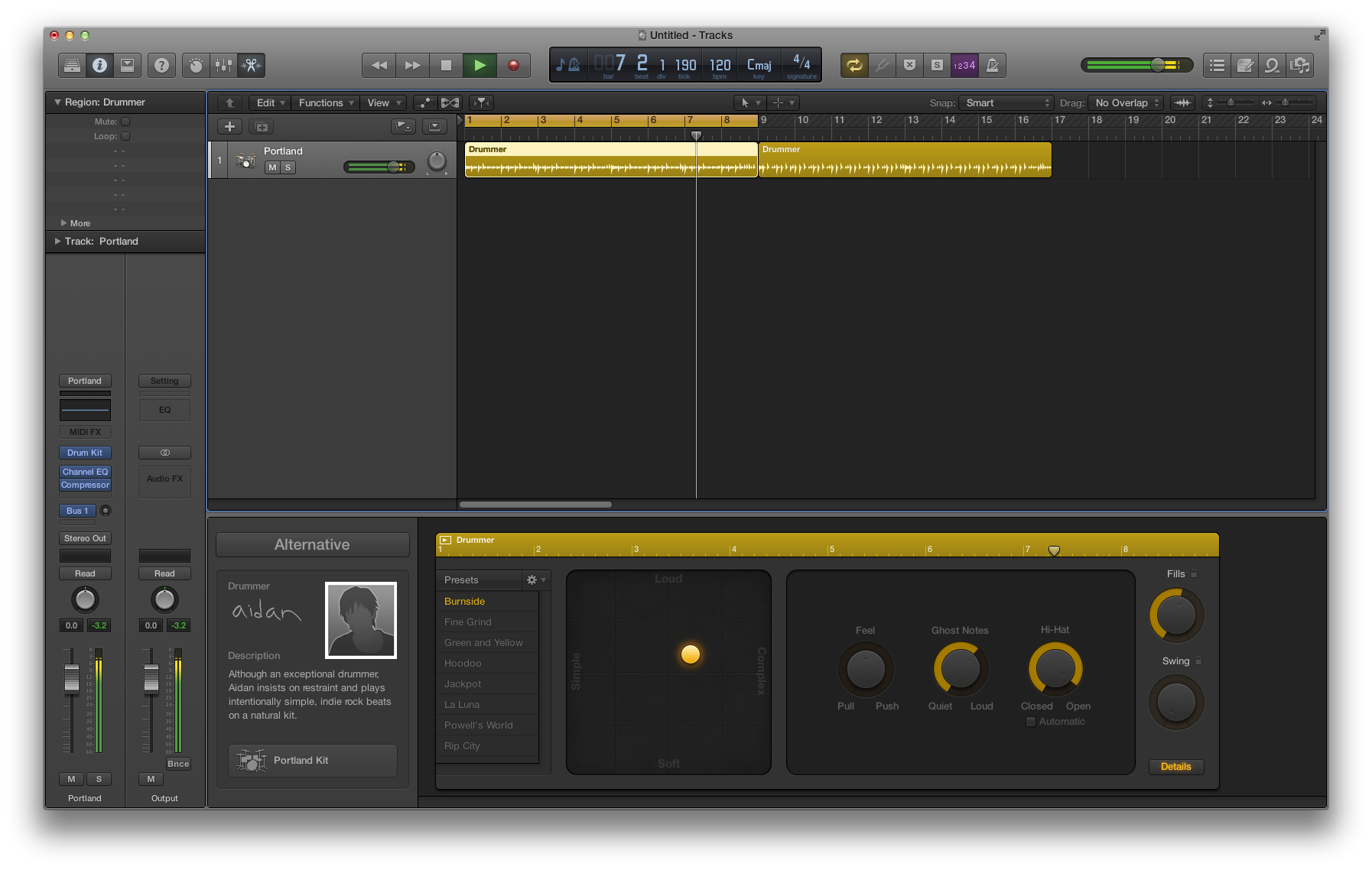 4: Once you start working with the Drummer Editor, you really start to appreciate the interactive nature of Drummer and the vast amount of variation that can be created. Click on the details, for example, to go one step deeper, adjusting parameters like the relative loudness of ghost notes, as well as forcing the Hi Hat towards a more open or closed position.

5: Each region with Drummer offers you a blank set of variables to explore. So, for example, you could start with a soft and simple pattern for the first verse, then move to a loud and more complicated pattern featuring toms in the chorus. To structure the performance to your song, therefore, create new regions and adapt them using the Drummer Editor. 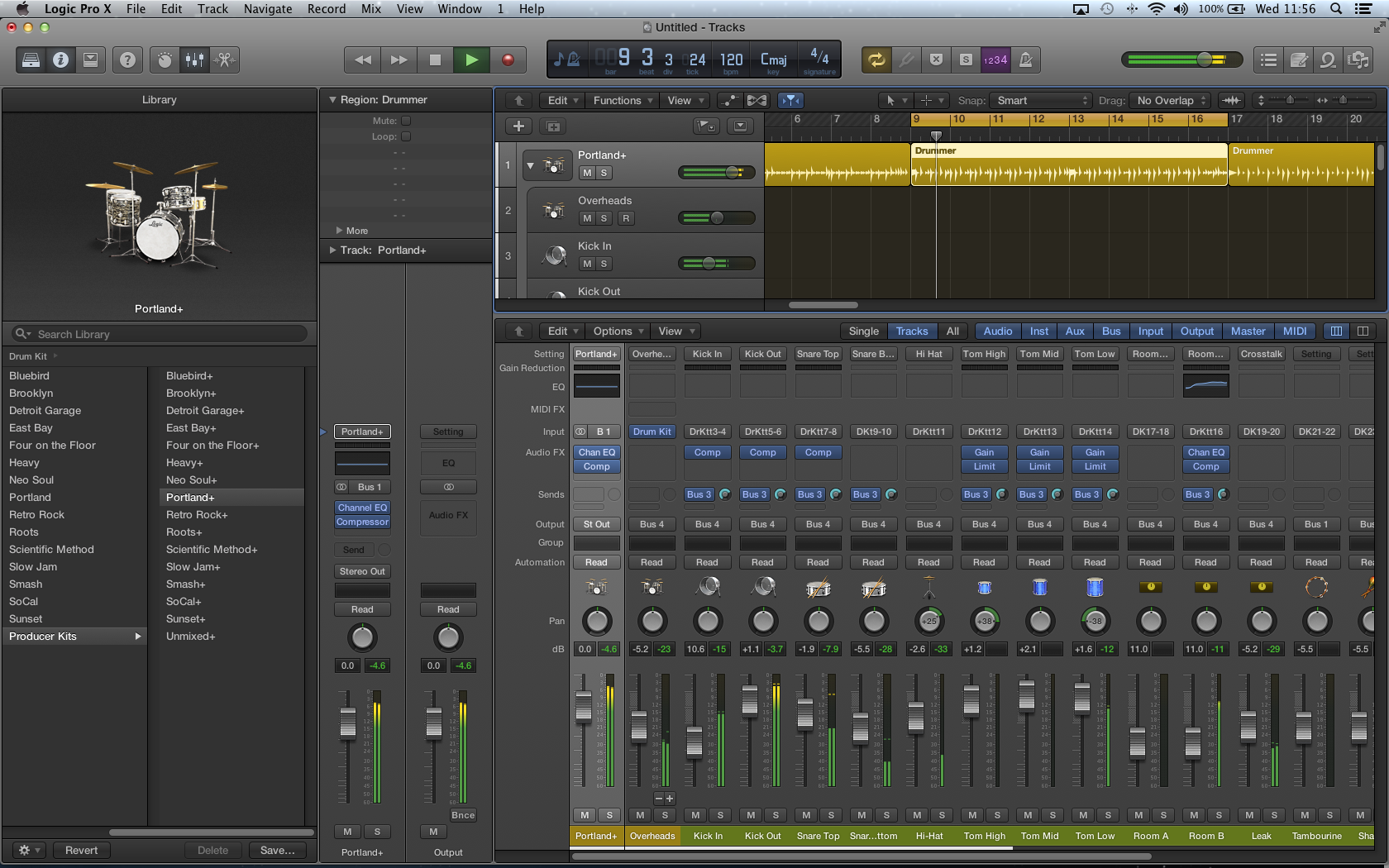 6: Changing the current stereo kit for one of the Producer Kits will give you complete fader-by-fader access to the sound of your drums. You can change over to a Producer Kit version (indicated with a + sign as a suffix) via the Library. Look for the Producer Kits folder, and once loaded, expand the Track Stack to see the full channel list.