Alchemy is a tremendously versatile synth, but its VA engine is the real star of the show. Mark Cousins explores some classic subtractive sounds… With Granular, Additive and Formant-based synthesis modes, Alchemy is a complex and vast synthesizer that can take years to truly master. At its heart, however, Alchemy has a surprisingly easy-to-use virtual […] 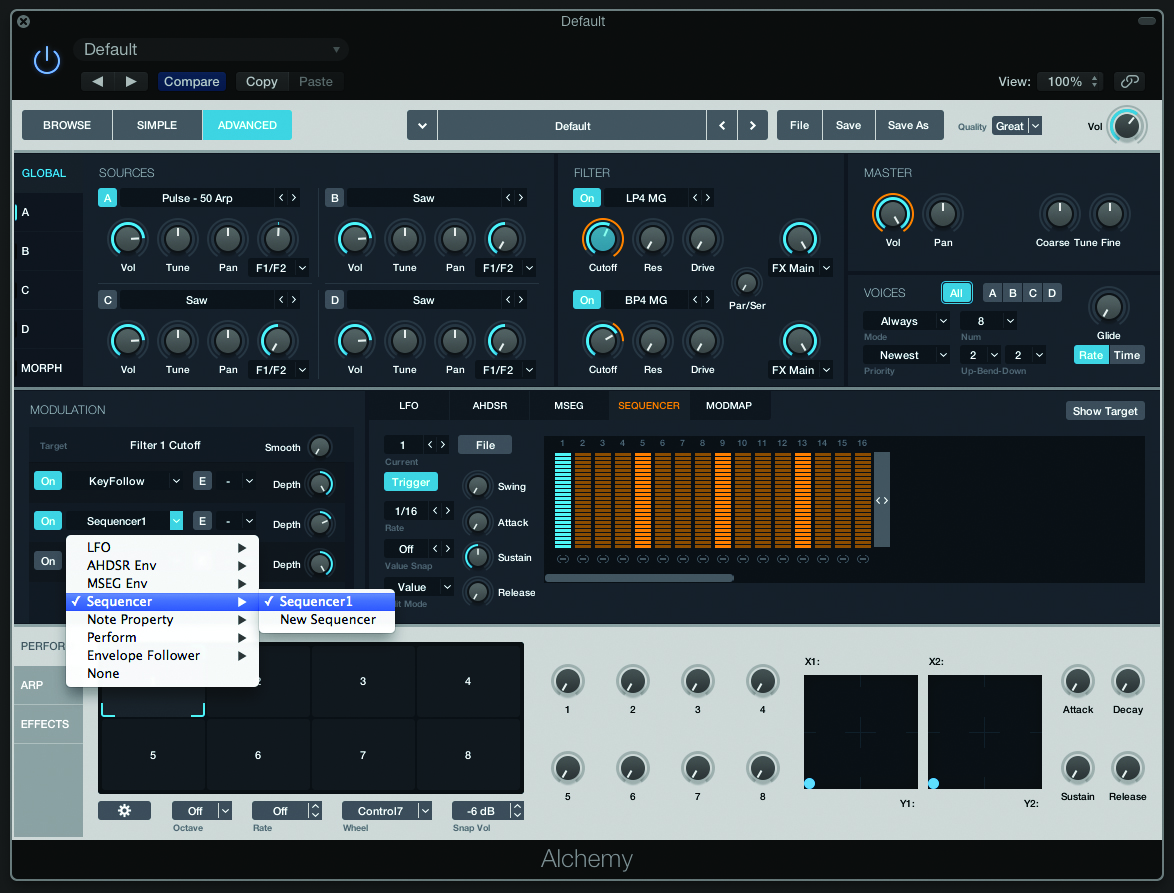 Alchemy is a tremendously versatile synth, but its VA engine is the real star of the show. Mark Cousins explores some classic subtractive sounds…

With Granular, Additive and Formant-based synthesis modes, Alchemy is a complex and vast synthesizer that can take years to truly master. At its heart, however, Alchemy has a surprisingly easy-to-use virtual analogue (VA) synthesis engine, capable of producing many of the distinctive synthesizer sounds we’re used to hearing on a Moog, ARP or classic Roland synthesizer.

While it might not be as immediate an instrument as Retro Synth, the sheer dexterity and sonic power of Alchemy’s VA engine is well worth closer inspection.

VA Basics
Thanks to a clear and intuitive interface, the basic principles of VA synthesis on Alchemy are easy to understand. We start with four Sources (in Alchemy-speak) that form our four oscillators – A, B, C and D. In VA mode, the four sources can each be assigned a variety of starting waveshapes, including the classic Sawtooth, Pulse and Square as well as a variety of more esoteric, harmonically-complex waveshapes.

The output of the oscillators is then passed on to two multimode filters, which can work in either parallel or serial configuration, before being passed to the amplifier. 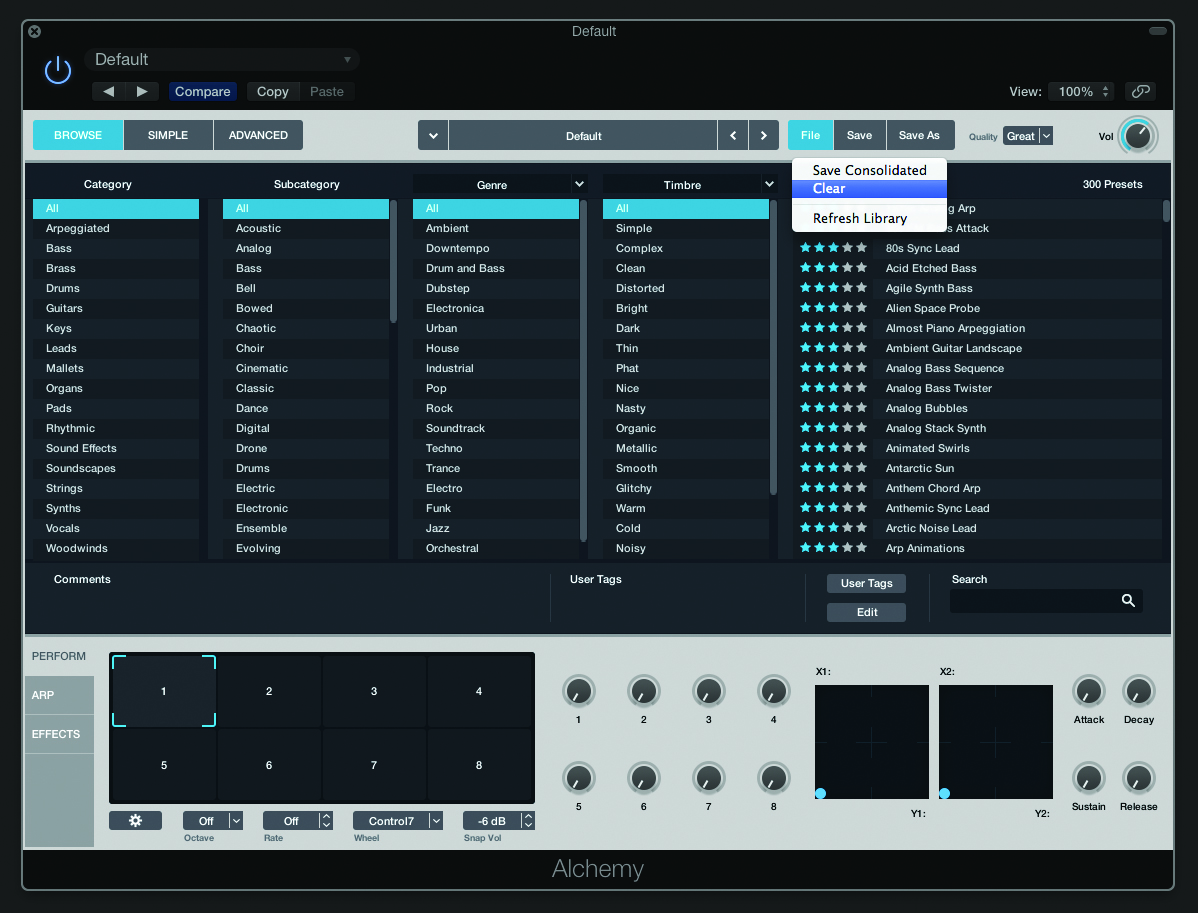 What seems an initially straightforward set of synthesis controls reveals additional depths and sonic powers as you move deeper into the architecture. Click on the source tabs on the top left-hand side of Alchemy’s interface and you’ll see an expanded set of controls for each Oscillator.

One of these expanded controls – found at the far right-hand side – are the Unison controls that double-up the oscillators with up to 16 additional voices. Add copious amounts of detune, and from just a single oscillator you can produce a sound of eight or more analogue synthesizers stacked on top of one another.

Filter Fun
For Logic Pro X users that are accustomed to working with the ES2, the serial/parallel filters should be easy to understand. Like the ES2, Alchemy has two filters that can either be used one after another (so that the output of the first filter feeds into the next), or in parallel where the two filters run concurrently.

You can also route the four oscillators so that they address either Filter 1 or 2, making it possible to create some unique hybrid effects. In the walkthrough (starting opposite), we’ll take a look at one example that creates a hybrid pad sound routing a single oscillator to two filters running in low-pass and band-pass modes respectively.

Modulation, of course, is the point at which any synthesizer starts to get interesting – mapping a variety of modulation sources (like envelopes and LFOs) through to any number of controls within the synthesizer. What makes Alchemy an exciting proposition is both the wealth of modulation sources available – including a Multi-stage Envelope Generator (MSEG) and Step Sequencer among all the usual Envelopes and LFOs – and the fact that they can be routed to any parameter within the synth.

Mod Heaven
To keep its operation intuitive, Alchemy’s modulation routing system works on a ‘last control touched’ principle. Adjust the filter cutoff, for example, and you’ll see Filter 1 Cutoff appear as a target in the modulation section. Simply click on the drop-down menu and you can select a modulation source from the comprehensive list.

What’s particularly useful is the orange banding that wraps around the selected parameter, which gives you an idea of the amount of modulation being applied. Reduce the depth control, for example, and the band shrinks, having less of an impact on the destination parameter. Handily, this also provides a visual indication of how the depth interacts with the ‘base-level’, often reminding you to lower a parameter so it can be modulated correctly.

As evident on many of the presets, the Step Sequencer is a great way of adding movement and animation into your Alchemy patches, especially when you combine multiple track lanes and clever parameter routing.

In keeping with the flexibility across the rest of the synth, Alchemy provides a total of five effect buses (A, B, C, D and Main) each of which can be assigned its own chain of effects. 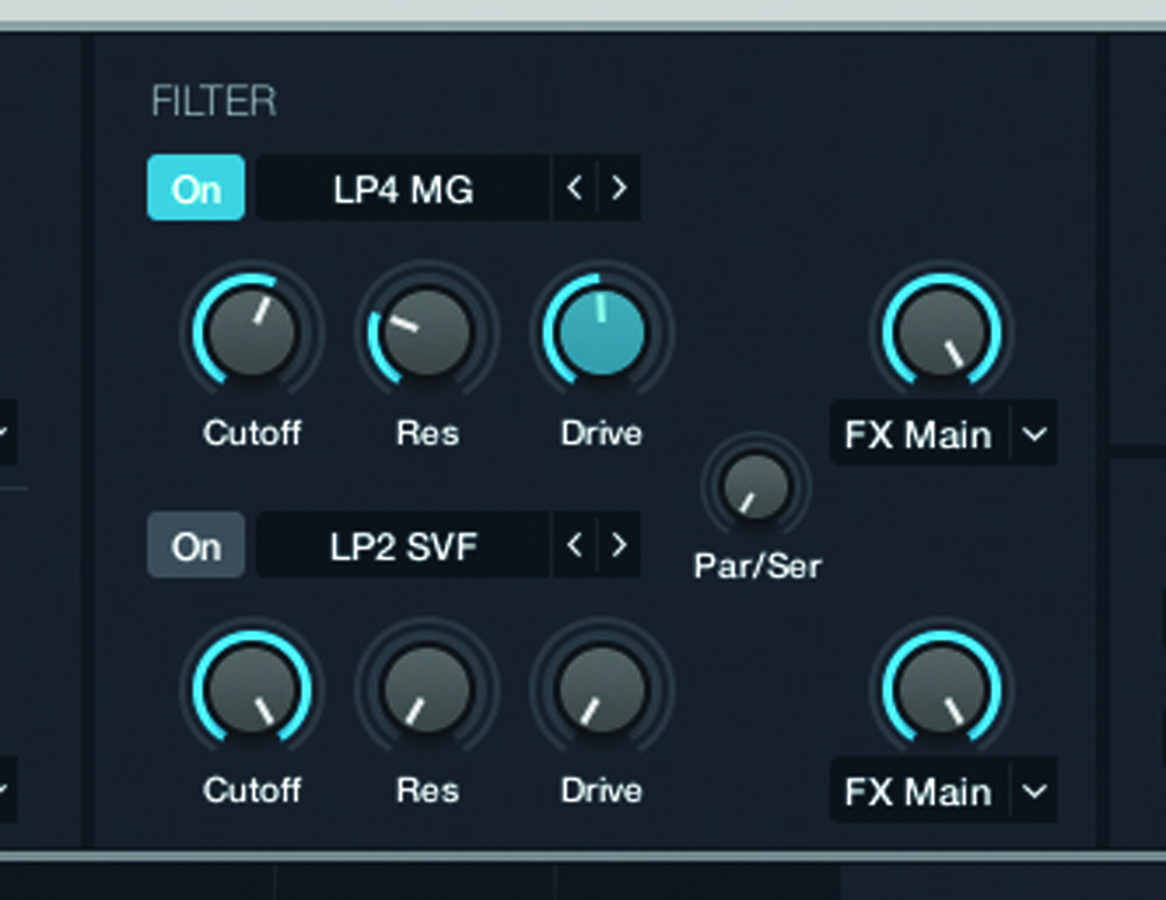 If you’re thinking that the omission of Alchemy’s Granular, Additive, Formant and Sample-based synthesis leaves a gaping hole in your understanding of Alchemy, you need not worry. Understanding the architecture of Alchemy via the familiarity of VA synthesis is a great first step in a more comprehensive understanding of the synth.

In truth, the more esoteric and unusual Source modules tap into this same architecture, so that what once seemed like an oscillator has miraculously transformed a granular synth engine. Although the source module changes, the route through the synth – including the filters, FX routing and modulation routing – remains the same.

In a future workshop, therefore, we’ll take a look at some of the more advanced features of Alchemy and how they can be used to produce highly contemporary sounds, rather than the old-school analogue patches we’ve explored this time.

As you’ll see, Alchemy is a deep and complex musical instrument, but one that really rewards time spent with it, thanks to an intuitive interface and an almost limitless set of possibilities to explore. Look out for more in a future tutorial

Focus On VA Element Controls
The VA Element Control (found as part of the expanded Source options) has a number of detailed but important controls that relate specifically to the task of VA synthesis. When you load a Square or Pulse wave, for example, the Symmetry control acts as a Pulse Width control, which can be modulated to create the classical PWM (Pulse Width Modulation) effect. 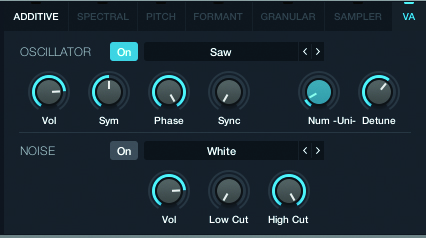 Sync creates a form of pitch-based distortion, whereby the wavecycles of two oscillators are locked together. Raising Sync increases the waveform distortion, and sounds really effective when controlled from an Envelope generator for the classic ‘sync sweep’ sound. As well as a Unison option, you can also activate a noise source, which is great for synth percussion effects, or adding a touch of grit into fast-moving sequencer lines.