As Mark Cousins’ tutorial exploring the use of Reverb & Space Designer in Logic Pro X continues we explore Room Designer and using Space Designer creatively… Step-by-Step – Room Designer 7: Now let’s turn our attention to the drums, this time clicking on the Synthesized IR tab so that we can create an IR from […] 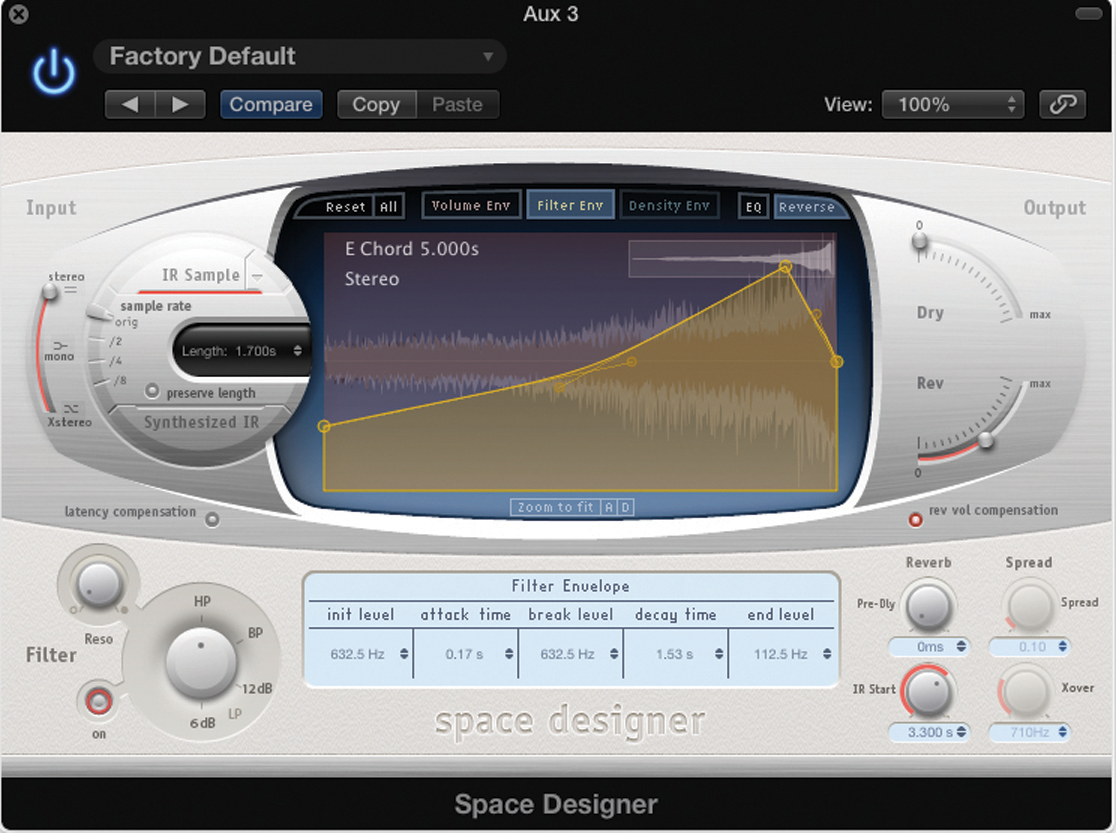 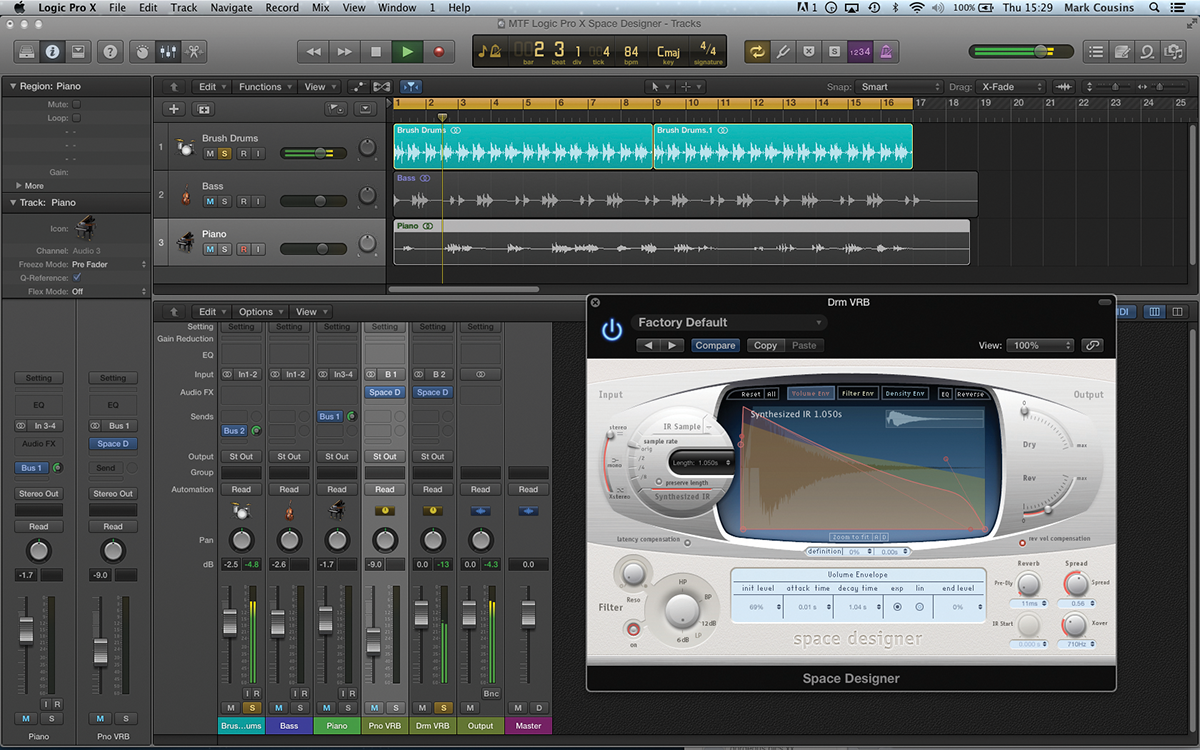 7: Now let’s turn our attention to the drums, this time clicking on the Synthesized IR tab so that we can create an IR from scratch. Start by notching down the reverb time from the default two seconds to around one second. 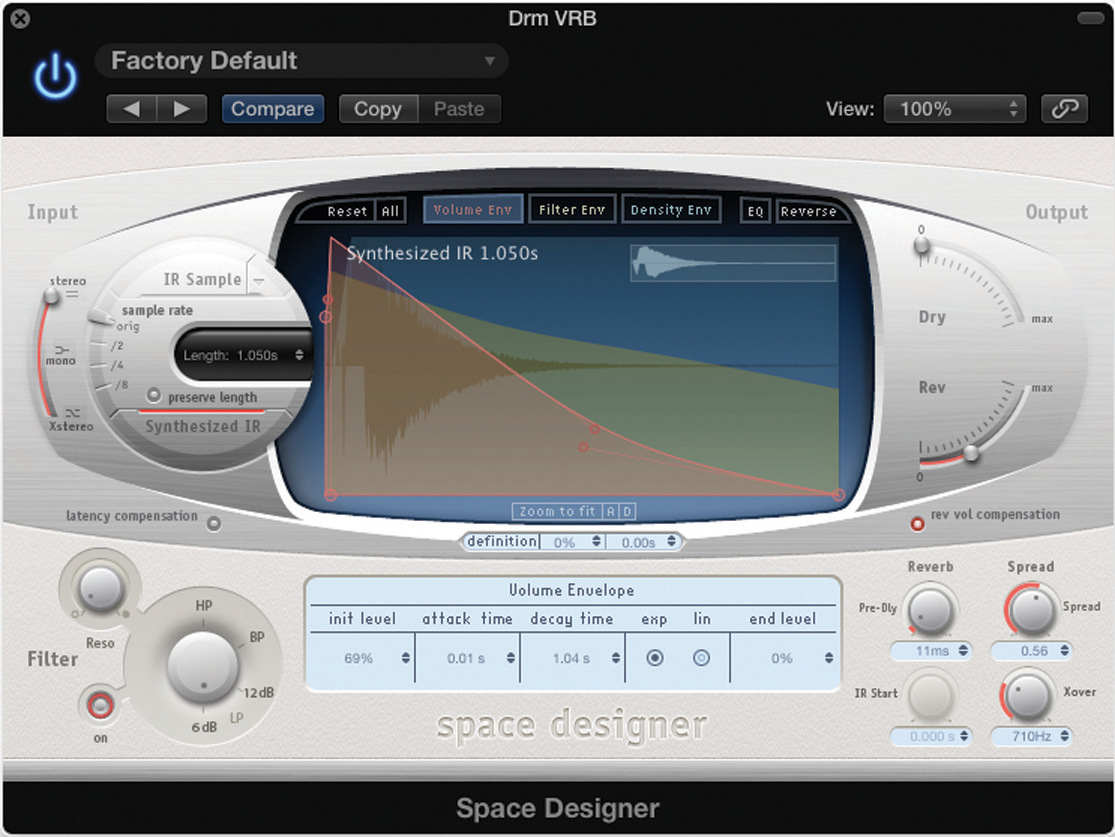 8: On either a Sampled or Synthesized IR, the Volume Env can be used to shape the amplitude of the reverb over time. Here, we’ve created a more exponential decay, which is an interesting alternative to shortening the decay time. 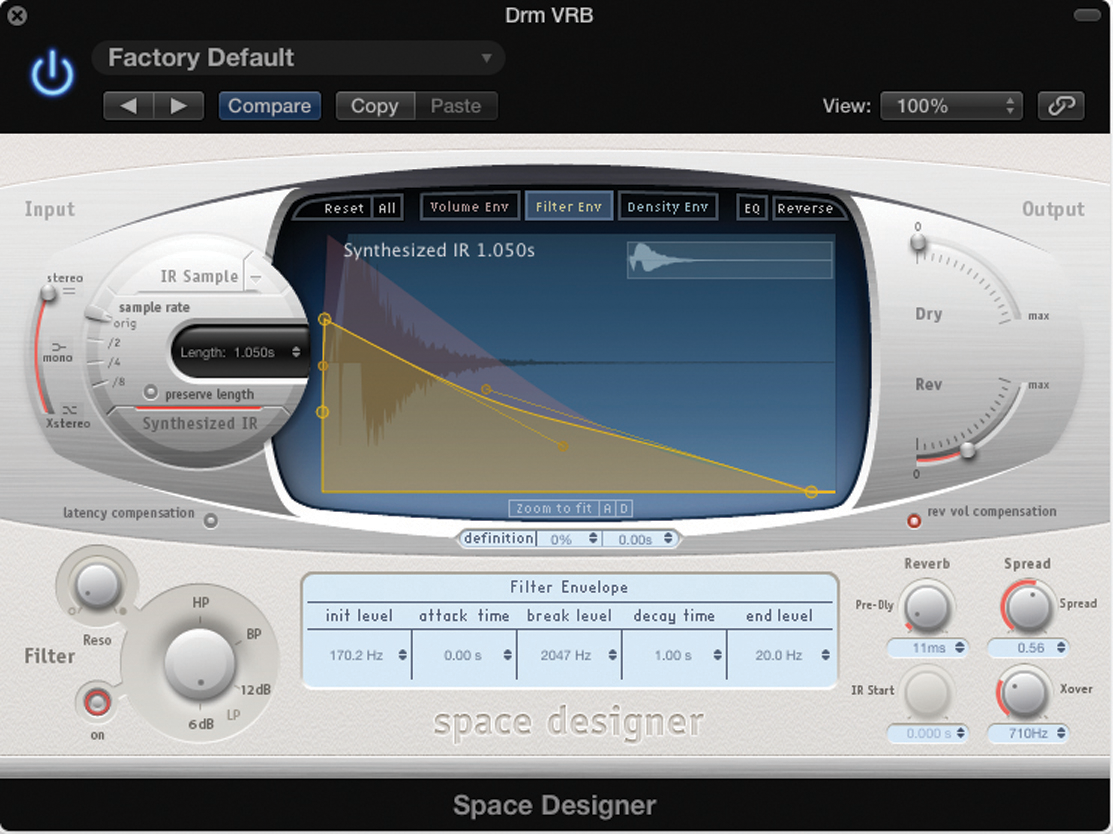 9: The Filter Env can be used to change the timbre over time (the EQ, by contrast, is static). Set the Initial level to define the overall darkness, and then modify the curve characteristic to change the amount of high frequency damping. 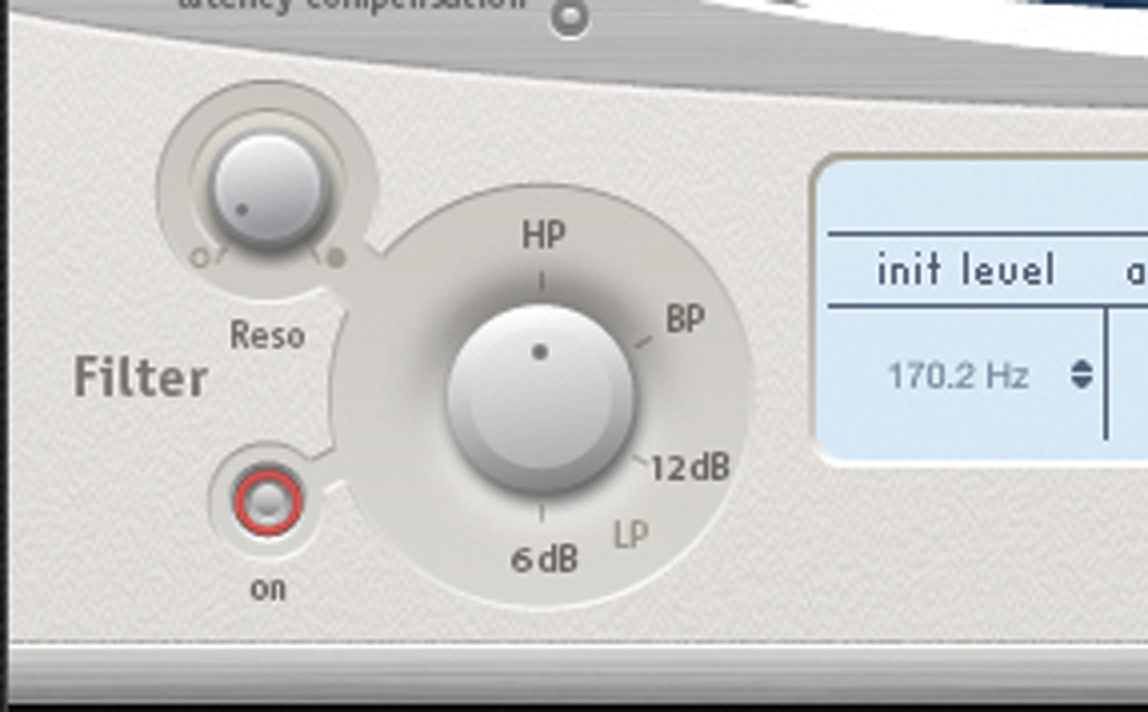 10: The Filter itself can be set to work across a variety of modes, with the default being a relatively shallow 6dB low-pass filter. Try using the BP and HP setting on the drums, which contours the reverb more towards the snare. 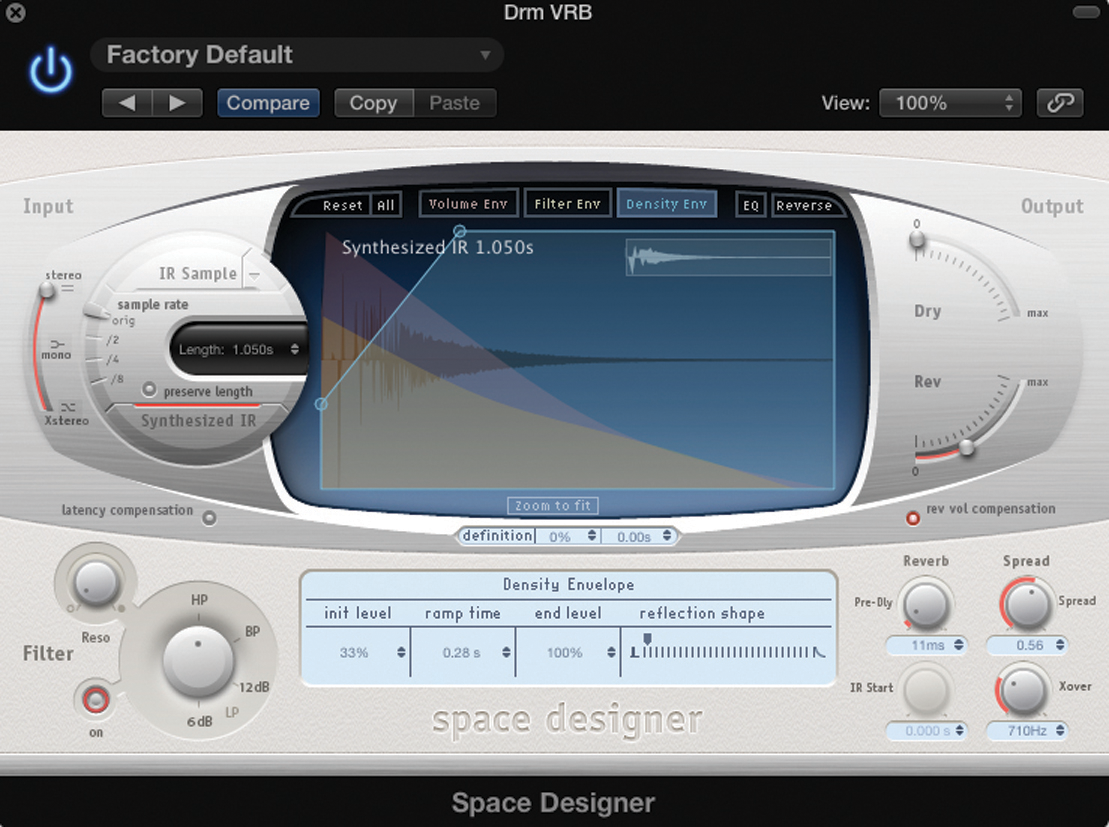 11: The Density tab is unique to Synthesized IR and cannot be edited in an IR Sample. Try lowering its initial phase to create a coarser sounding reverb with distinct echoes. Notice how the tail’s graphic updates to show the lowered Density visually. 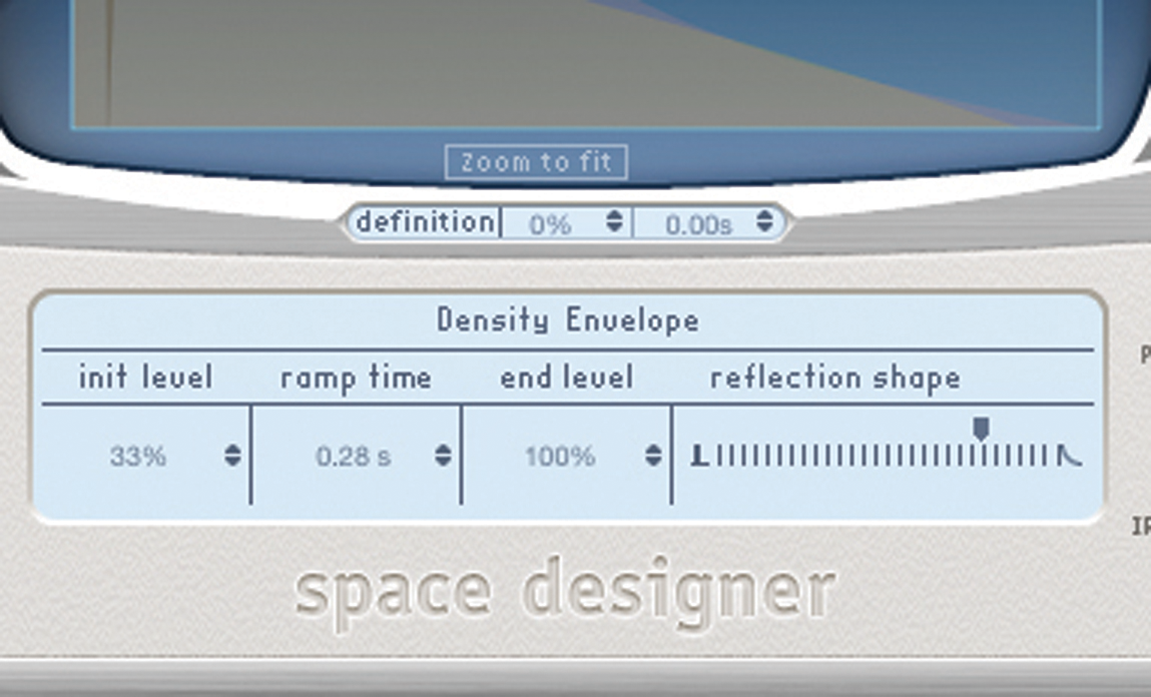 12: If you’re adapting the Density, it’s well worth playing with the reflection shape control. On the left-hand side on the slider, the reflections are more transient, whereas moving the slider to the right creates a more rounded set of reflections. 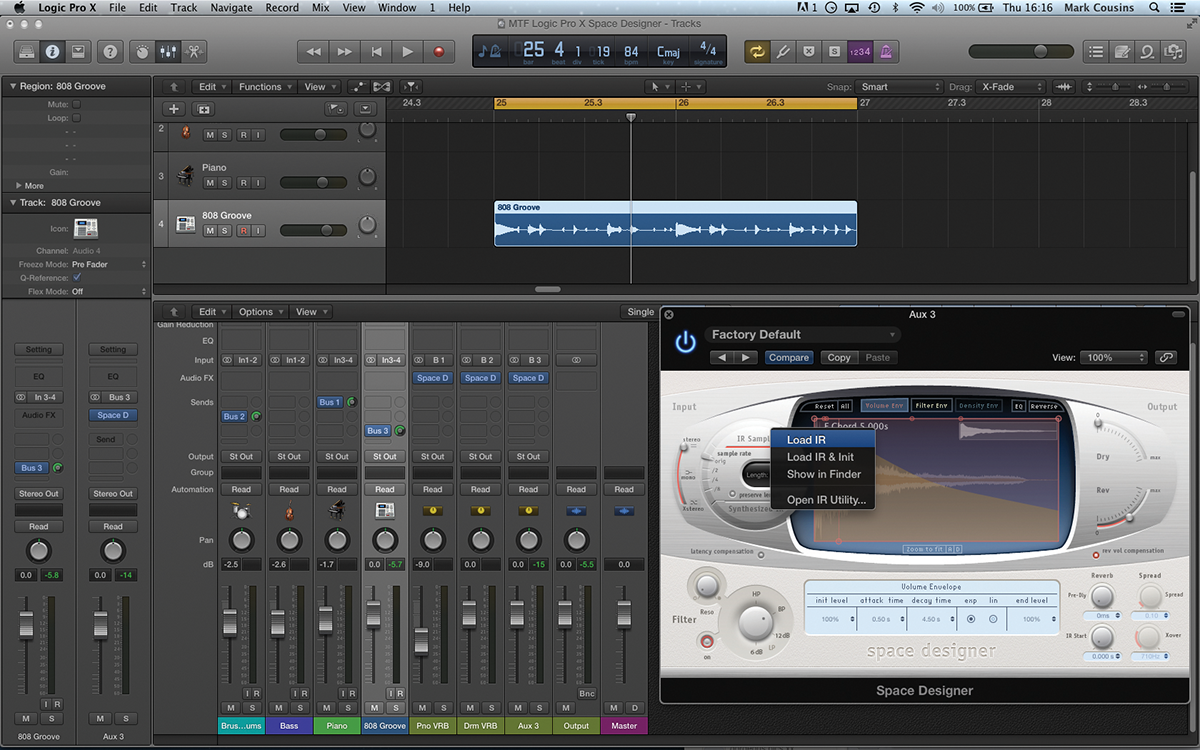 13: As well as using the supplied Sampled IR files, you can also import your own sounds for more experimental applications. Working with the 808 Groove, setup an instance of Space Designer and load the ‘E Chord.aif’ from the Audio Files folder. 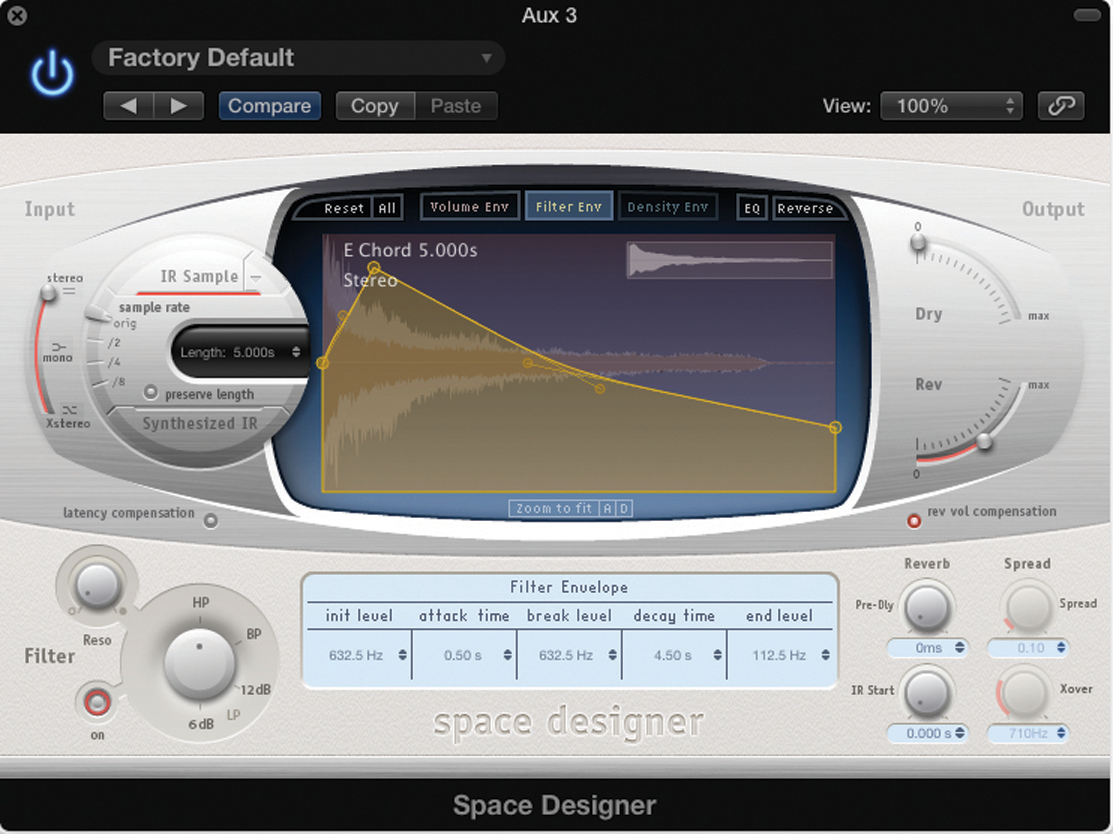 14: Listening to the playback, notice how the drum loops pick out shared frequencies in the sustaining piano chord, almost adding a pitched quality to each part of the kit. The filter really comes in handy here, especially on the HP and BP modes. 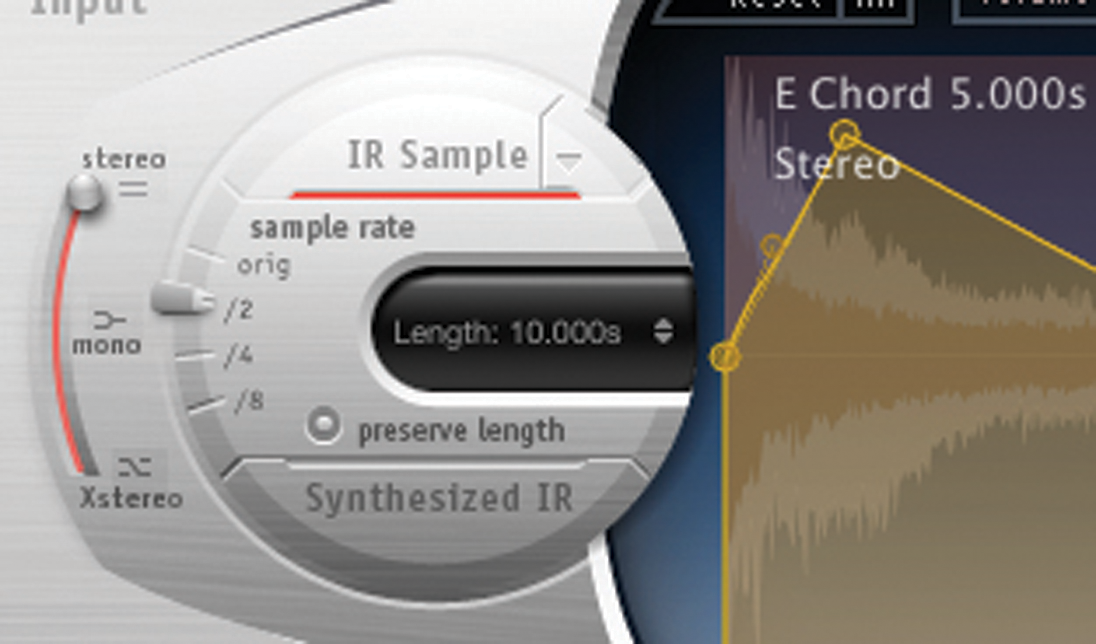 15: One interesting feature is the sample rate – especially with ‘tuned’ IR files like the piano. Using the /2 option, the file is played back at half its speed, doubling the length of the effect as well as lowering the pitch by an octave.

16: Return the sample rate to orig, and then press the Reverse button in the top right-hand corner of Space Designer display. When you’re using the reverse option, it’s well worth adjusting the IR Start so that the length of the reverse is correct. 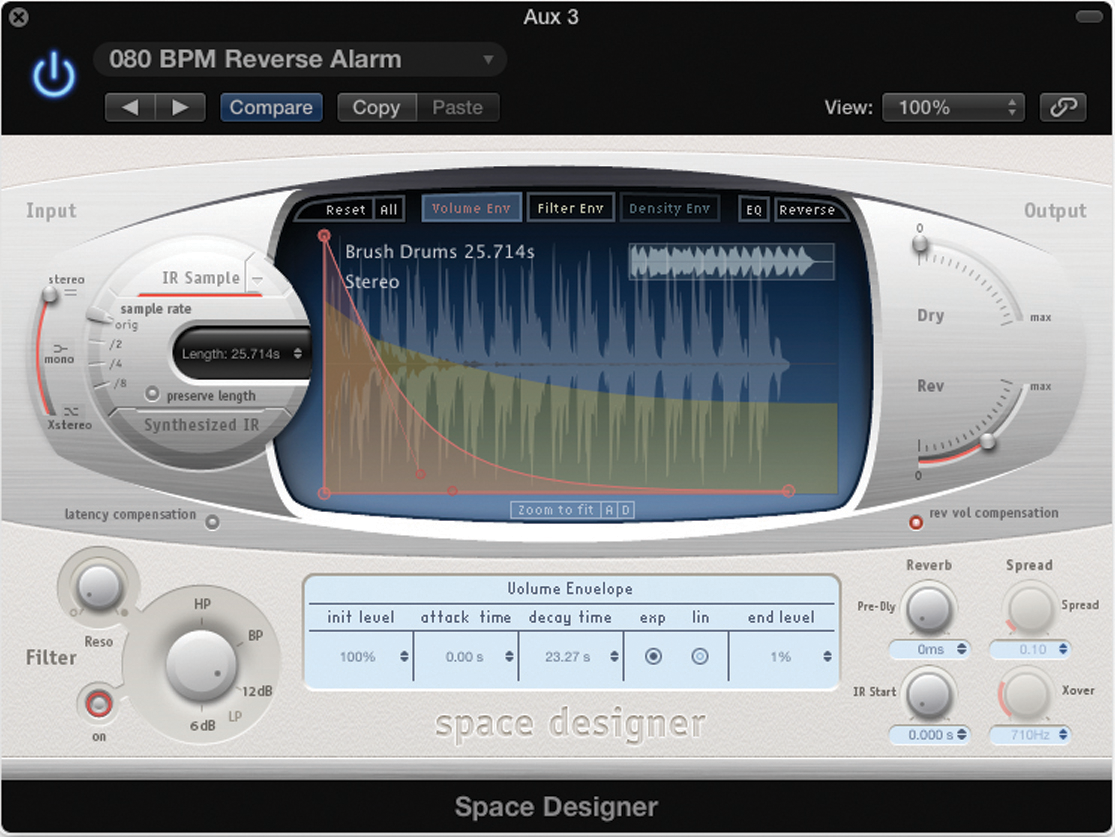 17: Other sound sources can provide some interesting and unusual results. Try using a drum loop at the same tempo as the original track. The result is a form of ghostly tempo-synced delay effect, with each hit like its own mini IR Sample. 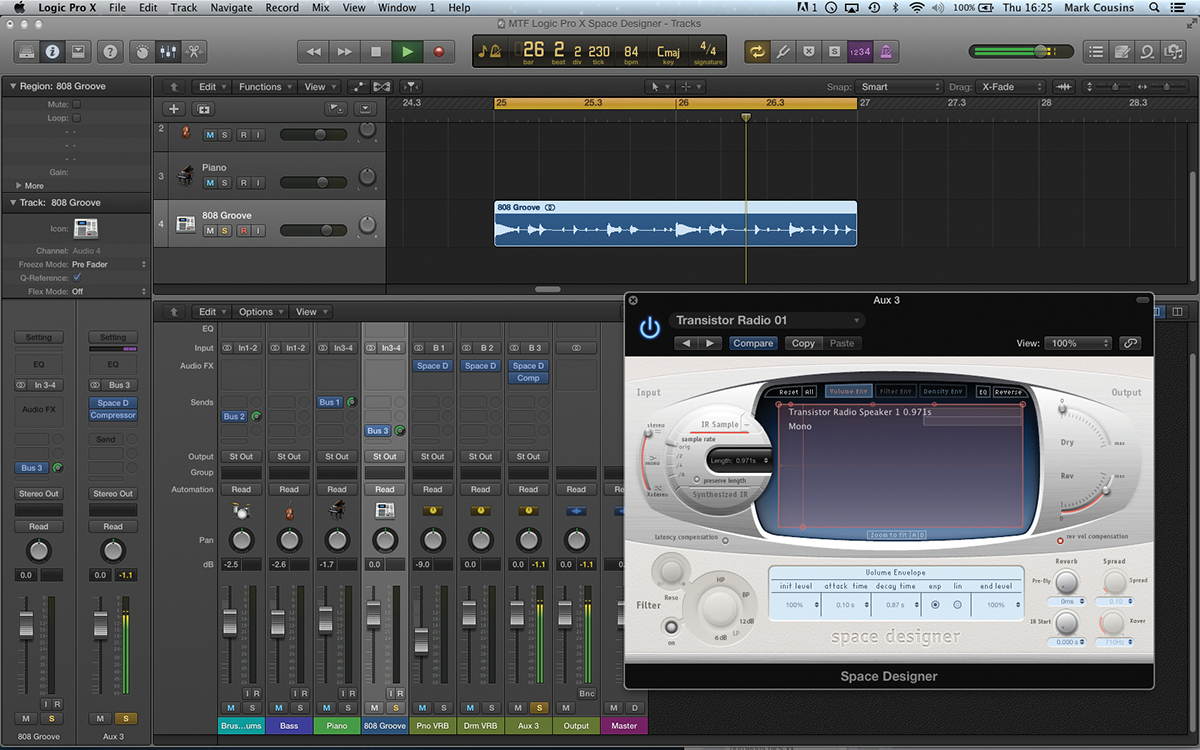 18: Look in the Warped Effects preset folder and you’ll find a collection of lo-fi IR files taken from speaker cabinets. Unlike the other applications we’ve seen, you need to run Space Designer as an insert effect, with wet at 100%.