Logic Tutorial: Getting Started With Mastering

With just a few tweaks to your usual workflow you can transform both the ease and sonic effectiveness of mastering in Logic. Mark Cousins shows you how in this latest Logic Tutorial       Although Logic is primarily a music-production tool, it’s interesting to see how the application can be reappropriated for an alternate […] 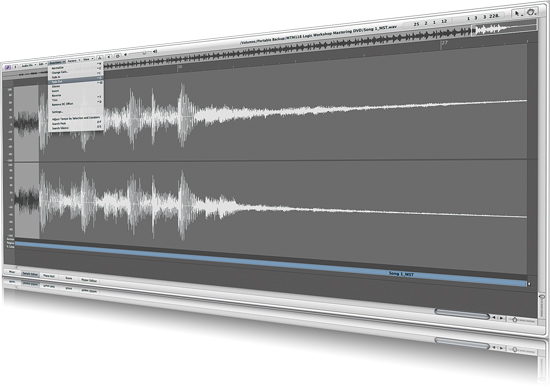 With just a few tweaks to your usual workflow you can transform both the ease and sonic effectiveness of mastering in Logic. Mark Cousins shows you how in this latest Logic Tutorial

Although Logic is primarily a music-production tool, it’s interesting to see how the application can be reappropriated for an alternate audio-production activity – in this case, mastering.

Although professional mastering engineers tend to adopt a dedicated mastering platform such as Pyramix for their work, the majority of musicians usually turn to an existing music-based DAW to master their compositions. However, given the different set of sonic objectives, it’s inevitable that your workflow needs a degree of tweaking, whether you’re using existing tools in a new way, for example, or using a different set of mastering-orientated features.

In this tutorial, therefore, we’re going to take a broad look at mastering workflow in Logic. As such, it’s an invaluable insight into familiar features in a new application – whether it’s screensets, markers or track bouncing – as well as illustrating a typical mastering workflow in a step-by-step fashion.

On The Right Track

In Logic, we’re typically used to working with a series of tracks, each representing a different instrument that contributes to a bigger overall mix. In mastering, though, the equation is slightly different in that we’re dealing with a series of songs that need to be knitted together in sequence to form a final playlist. Even if you’re not assembling a full CD, it’s highly likely that you’ll be working with a collection of songs, trying to ensure that there’s some consistency in level, punch and timbre across the various mixes.

In the case of mastering, therefore, it’s best to work to a system that uses a different track for each song in your playlist, allowing you to audition and instantiate different mastering settings for each song, as well as getting some indication as to how the tracks might be best ordered to make a complete listening experience. Given that you’ll eventually have both mastered and unmastered versions of the project, it’s worth using colour-coding to distinguish between the two stages of production (mixes and masters). Ensure you colour the mixer channels using the View>Colours option before you import the audio regions. It’s also worth toggling between two colours for ‘mix’ files to keep some distinction between different songs. 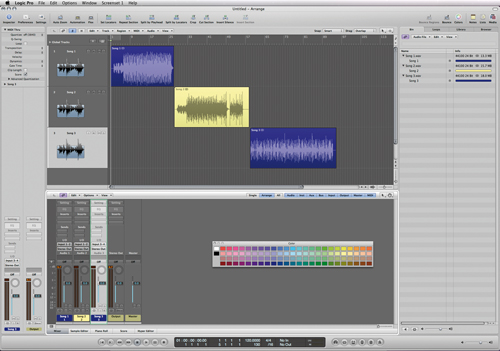 As well as tracks for the individual songs, it’s also beneficial to have a dedicated track for the final master files, and another spare track for reference material. Ultimately, the ‘Masters’ track will be the final destination for rendered sound files, so that you have a solitary track lane for the final playlist. Having a separate reference track lane will allow you to audition your audio material against commercial recordings, arguably applying a gain adjustment (especially if you’re comparing mastered and unmastered material). Again, use colour-coding to maintain this distinction. 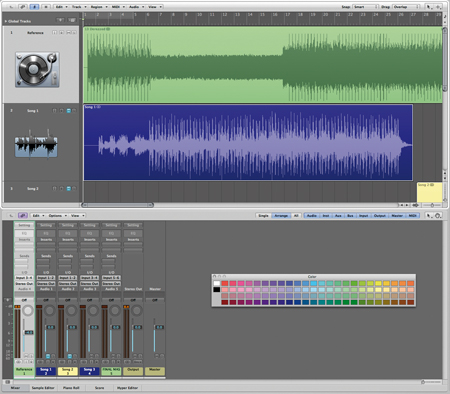 As you start assembling your playlist, it’s interesting to see how subtle features of the application take on a new significance. An obvious example is the timeline, which you’ll need to change using the small icon in the top right-hand corner of the Arrange area. Rather than using the default Bar setting, change it to the Time mode, as a bars-and-beats division has little relevance for mastering. As well as having a more meaningful way of reading a song’s duration, you’ll also be able to gauge the duration of the complete playlist, which will be important if you’re assembling a Red Book CD.

Before you start applying signal processing, it might also be a good opportunity to do some basic top-and-tailing of the files. You’ll need to set the precise In and Out points for each region, using either the Scissors tool or resizing the region by adjusting its borders. Ensure that there’s a frame or so of pre-roll before the start of the music, and that the end of the file is placed appropriately. At the end of the song you’ll probably need to apply some form of fade (using the Fade tool), mainly to tidy up the decay of reverb tails but also to prevent instruments ringing-out for too long. 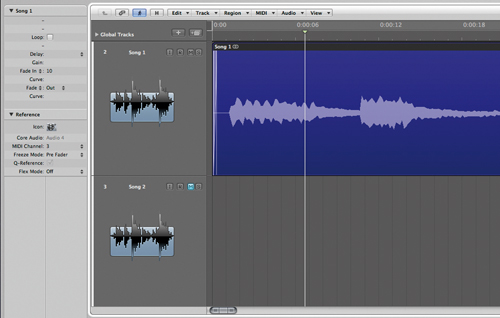 Mastering processing should be applied on a track-by-track basis, although as all of the songs are active as part of the same project you can work comparatively to some degree, building up a balanced and coherent overall sound. For example, I often assemble a project starting just with equalisation, trying to build a consistent neutral tone across the complete playlist before moving onto compression and limiting. Of course, it’s important to find a method that works for you, so if you want to complete the mastering one track at a time, that’s also perfectly fine. 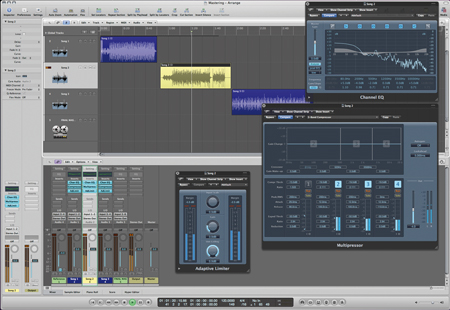 As any good mastering engineer will testify, a decent set of meters is essential to the mastering process. By instantiating a variety of meters across your main outputs you can gauge the important attributes of the songs you’re processing as well as any pre-existing reference material. The MultiMeter, of course, is invaluable, either in its Analyzer mode – enabling you to gain some understanding of frequency balance – or in the Goniometer guise – as a means of decoding the stereo soundstage of you master. To get a full understanding of your master’s loudness it’s best to use RMS mode on the Level Meter, as once you’ve applied some aggressive limiting the peak values will be somewhat nondescript. 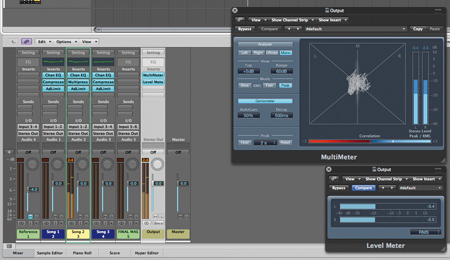 Given that a finished playlist can potentially stretch to well in excess of 60 minutes and that your mixer will be littered with plug-ins, often the biggest obstacle to mastering in Logic is the means of navigating and viewing all this information. When it comes to the chain of plug-ins used to process a song, it’s well worth creating a unique numbered screenset for each song, with all the associated plug-ins active on the screen. You can move between screensets using the numeric keypad, arguably using the corresponding numbered screenset for the given track in the playlist (screenset 3 is song 3, for example). If you go beyond nine songs, of course, you can always use the [Ctrl] key to enter a two-digit screenset. 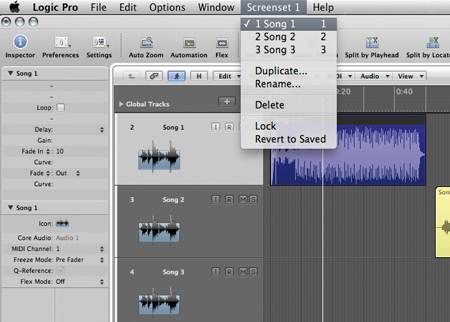 To navigate a 60-minute project, consider using the Marker feature. Click on the Lists icon in the top right-hand corner of the Arrange window and then select the Marker tab. You can create a Marker by resting the song position pointer at the start of the song’s region and then pressing the Create button in the Lists display. Once the Markers have been created you can use the Finger tool (which should be accessible by [Cmd]-clicking) in the Marker List to move directly to the song in question, potentially followed by the appropriate screenset to move to the accompanying plug-in settings. With a little practice you should soon be able to move between songs and their plug-in settings almost instantaneously.

With the mastering processing finished, we now need to consider rendering a final audio file to form our finished master. Ideally, the finished file should conform exactly to the existing region length, so that the start and end points are exactly as we’ve established them. To do this, highlight the region in question and then select the local menu item Region>Set Locators by Regions, which should now set the two locators so that they conform precisely to the current region length.

With the locators in place you can now evoke the Bounce function from the mixer, which renders a version of the final mix with the additional mastering processing in place. At this stage I’d recommended keeping the file in a high-resolution format (ideally 24-bit, 44.1kHz) so that you have a high-quality version for future reference. Append the file name with a simple extension such as _MSTR (so that you’re clear that the file is the mastered version of the song) and drag it onto your Masters track lane, muting the original version but leaving the settings intact just in case you decide to revisit it at a later point. 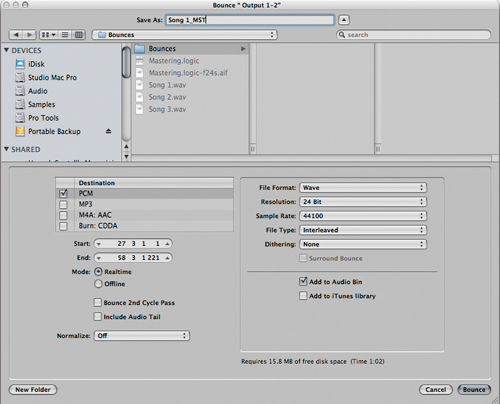 For the final deliverable versions of the file, it makes sense to open a new empty project, import the final 24-bit mixes into the audio bin and use the copy-and-convert function (Audio File>Copy/Convert File) to create the desired audio files at the correct resolution and in the correct format. For example, if you’re delivering CD-quality files, reduce the bit-depth to 16-bit and select from one of the four different dithering options. If you need to create deliverable files in different formats simply repeat the process, although try to remember to uncheck ‘Change file reference in Bin’ so that you can always return to the source 24-bit files. 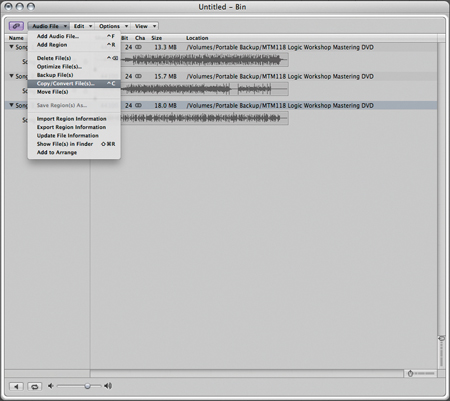 The techniques that we’ve illustrated here aren’t the only way in which you can master in Logic, but they do illustrate a thought-out approach that utilises the features of Logic to aid an efficient and productive workflow. Of course, there’s always WaveBurner to consider as well, although there’s a lot of merit in working in a familiar environment (in this case, Logic) and then simply dragging the final 16-bit WAVs into WaveBurner on those rare occasions when you need to make a finished Red Book audio CD. Equally, with CDs being increasingly less relevant for music delivery these days, there’s an argument that the approach taken by WaveBurner isn’t entirely necessary given the existing features of Logic.

Given the emphasis on workflow, we’ve not spent too much time discussing signal processing, so if you want some more information on that aspect of mastering it’s well worth taking a look at Issue 68’s Workshop on the Multipressor and Issue 78’s Workshop on the Channel EQ. With a good workflow in place, though, it gives you more time to concentrate on the sound of your masters rather than getting bogged down by a clumsy and inefficient way of working.

Here’s a vid from MasteringinLogic.com: