Alchemy has a flexible architecture and its wealth of modulation options can create sounds with a surprising sense of movement. Mark Cousins gets animated… Having a synthesiser as powerful and as flexible as Alchemy residing in Logic is a joy for any sound designer or musician working in the field of electronic music. From gritty […] 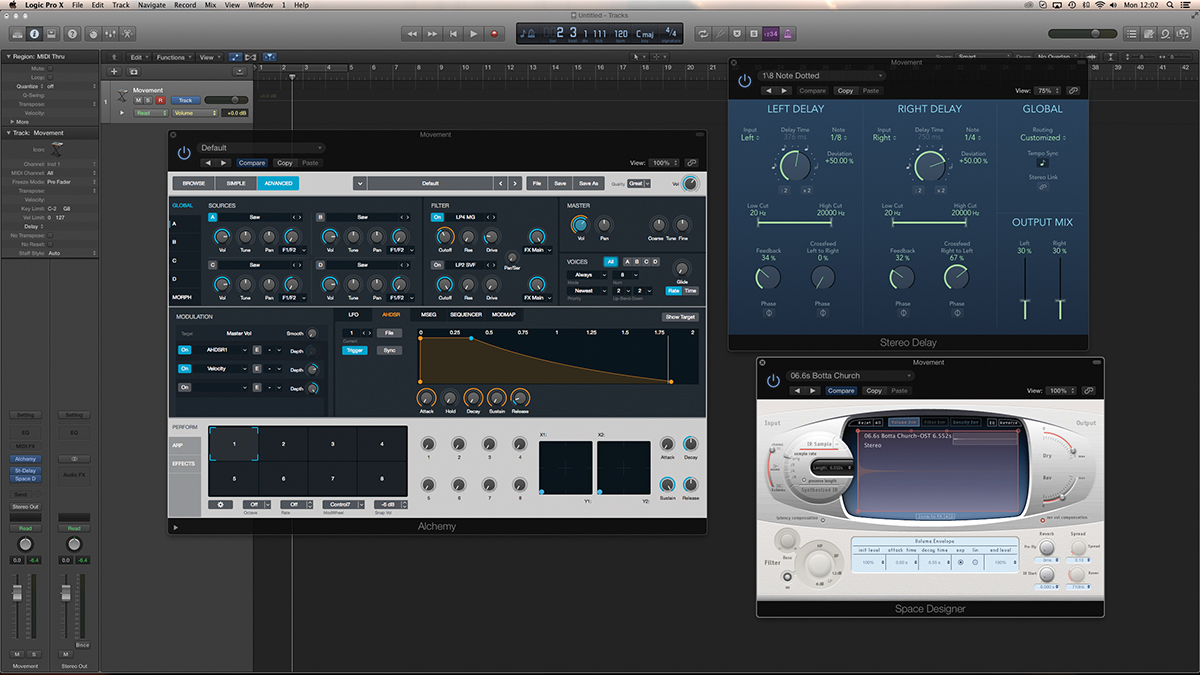 Alchemy has a flexible architecture and its wealth of modulation options can create sounds with a surprising sense of movement. Mark Cousins gets animated…

Having a synthesiser as powerful and as flexible as Alchemy residing in Logic is a joy for any sound designer or musician working in the field of electronic music. From gritty analogue basses to shimmering digital pads, there are few sounds Alchemy can’t turn its hand to.

One of Alchemy’s most interesting areas, though, is in the realm of ‘movement’ sounds – whether it’s a tempo-synced pulsating pad, or ‘one finger’-type patches that produce a complete musical hook from a single key. Although there’s plenty of preset fodder in this department, it’s well worth understanding the variety of techniques that can be used to add movement to your own sounds.

When it comes to adding ‘movement’ to an Alchemy patch, you have a variety of approaches that you can take, each offering different advantages and sonic possibilities. Put simply, movement is created using a variety of modulation sources – like an LFO, for example, or step sequencer – routed through to one or more destinations within the patch.

In most cases, the primary destination is usually filter cutoff to produce an exciting timbral movement, although you might also want to use the amplifier and/or the pitch of the oscillators as two alternative choices.

The first choice for movement in a patch has to be a tempo-synced LFO, of which Alchemy can use multiple instances of in any single patch. Once you’ve assigned an LFO, there are a few parameters worth particular attention.

Sync, of course, is the all-important means of locking the LFO’s movement to the tempo of your project, with rate then working in a variety of music divisions, like 1/8th or 1/16th. For the LFO’s shape parameter, you’ll want to pick one of the simple waveshapes like Ramp Down (which in this application sounds like a continuously re-triggered envelope generator), sine or square waveshapes. 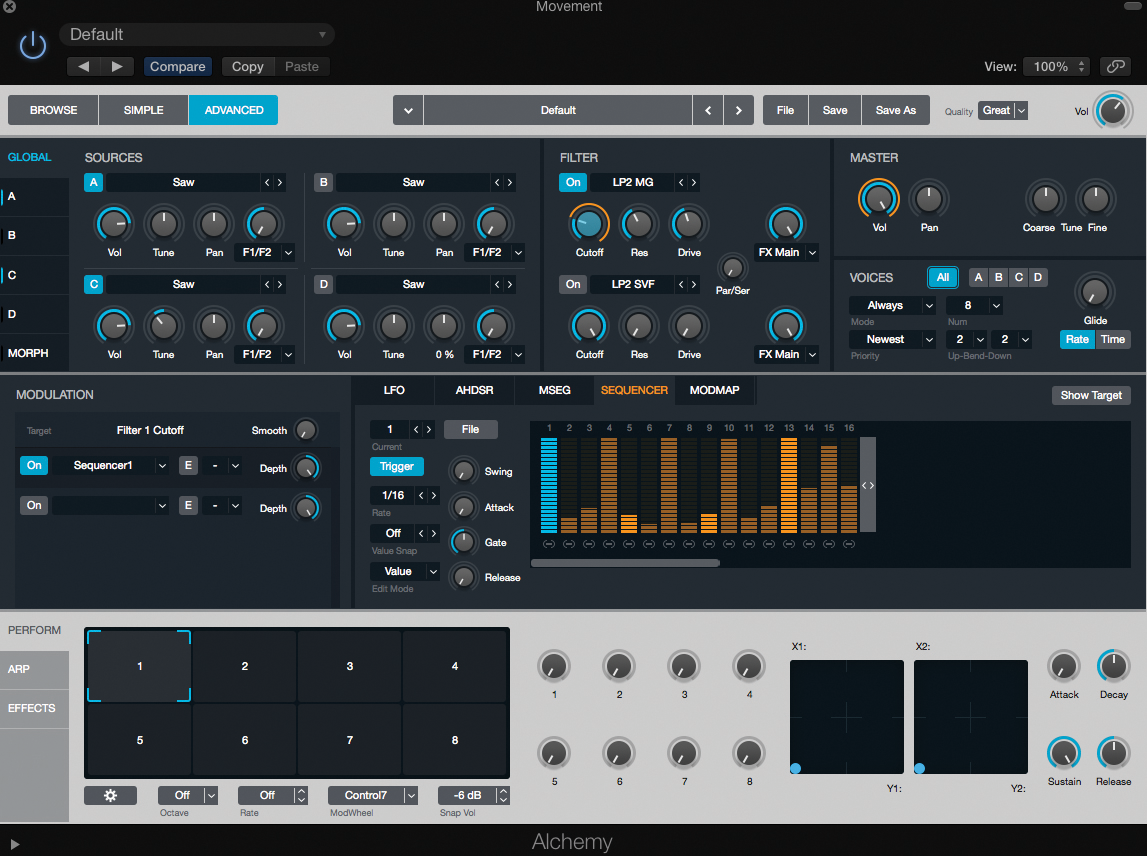 Often the most effective sounds, though, come from a small or moderate amount of depth, rather than the filter being modulated over its entire range. It’s also worth noting the Bipolar option. With Bipolar not activated, the LFO adds to the existing parameter level, rather working both positively and negatively on the current filter cutoff point.

The LFOs are definitely a great solution for adding movement quickly, but they aren’t quite as flexible as Alchemy’s MSEG (or Multi-Staged Envelope Generator).

As the name suggest, the MSEG works with a number of discrete stages, each stage much the same as an AD (Attack/Decay) envelope generator. Applied in a simple way, you could use just three or so tempo-synced steps, each step having its own amount of depth and an adjustable curve (which isn’t available on the LFOs, of course). What you’ll achieve is a result similar to the LFO solution, but with an added amount of interest – whether it’s contrasting the amount of modulation between steps, or the relative curve of each step.

If you’re creating a patch from scratch though, it’s well worth noting the MSEG’s own File menu, which contains various starting points (like Pulse 8th) that speed up the creation process.

The final modulator source to explore is the step sequencer, which bears many of the same sonic traits as the MSEG, although it’s worth making a distinction between the operation and output of each modulation source.

As the title suggests, the sequencer works best when you’re mainly interested in 16 or more discrete ‘stepped’ parameter values, and not so interested in the curvature between each step. This is evident in the sequencer’s display, which is focused on the relative depth of each step using a series of graph-like bars.

Although it isn’t possible to change the curve of each step, it’s worth noting that each step does trigger an attack, gate, release envelope that is associated with the sequencer. Using a short attack and gate, for example, and moderate release, you can create a result not dissimilar to the default shape of the MSEG modulator.

Shorten the release and increase the gate, and you’ll notice the movement as a series of short stepped values, whereas gate at full will produce an output almost exactly like the bar graph.

Rather than a one-size-fits-all solution, it’s great that Alchemy includes a variety of different modulation sources that can all be used inside the same patch. It might be, for example, that you use an LFO on the amplifier, modulate the filter using a complex MSEG and another LFO, while a parameter like reverb time is modulated using the step sequencer. The fact that

Alchemy also supports a semi-modular architecture, including parallel and serial filters, means that you can create stunningly complicated patches, limited only by your imagination.

Check out the walkthroughs to see how these techniques can be applied – whether you’re creating EDM-type pads, or complete musical phrases with the step sequencer. Despite the sonic complexity of Alchemy’s architecture, it’s a surprisingly intuitive synth that rewards those who are willing to step beyond its presets.

Alchemy’s arpeggiator is also another way you can inject movement into a patch, especially as Alchemy’s version includes a version of a step sequencer. In the case of the arpeggiator’s sequencer, the steps relate to a unique velocity setting for each note of the arpeggio. Map velocity to your chosen parameter, and the arpeggiator can control anything from filter cutoff to panning.

The arpeggiator itself contains the all-important Mode, Rate, Octave and Length controls, letting you move between a chugging eighth-note sequence, to swathes of 32nd notes spiralling through a chord. As with the other examples, the best results come from combining the arpeggiator with other ‘movement’ modulators like the LFO. 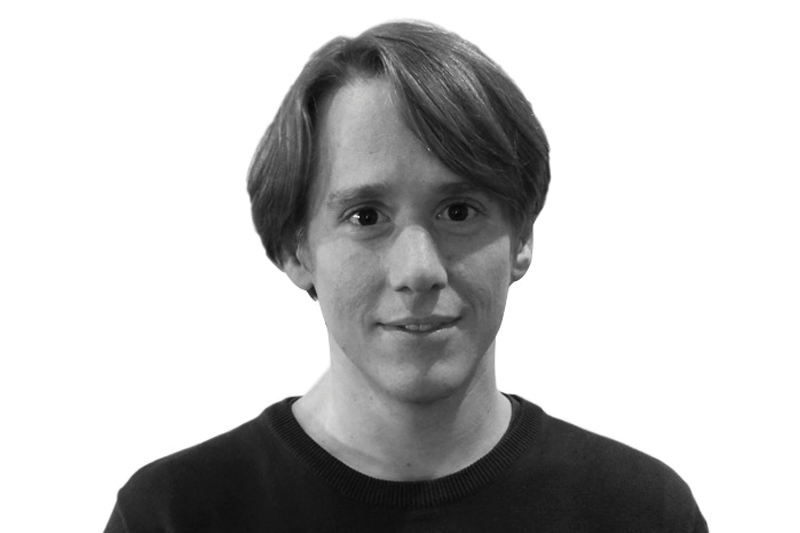 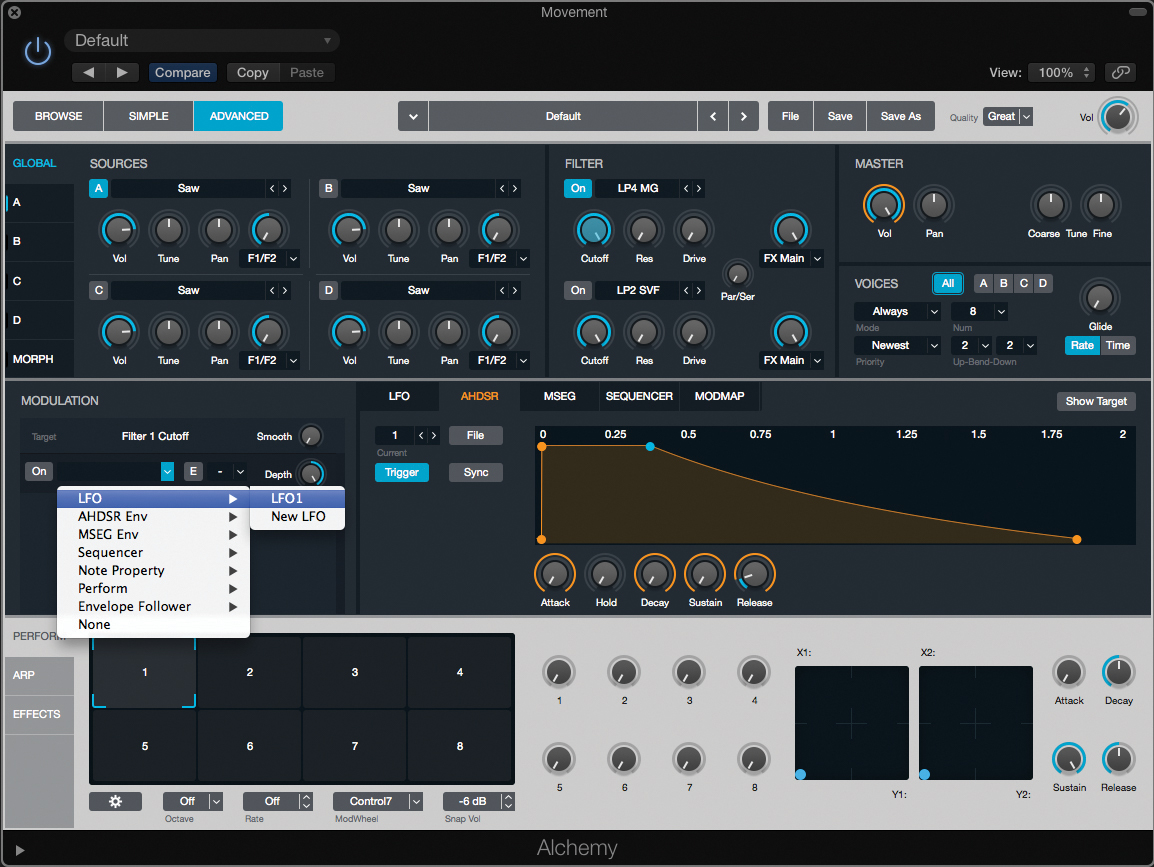 2: Click on the filter cutoff control and notice how the modulation area changes to show Filter 1 Cutoff as the target. Click on the drop-down menu and assign LFO1 to modulate the filter. Lower the cutoff and tweak the depth to get the desired amount of movement. 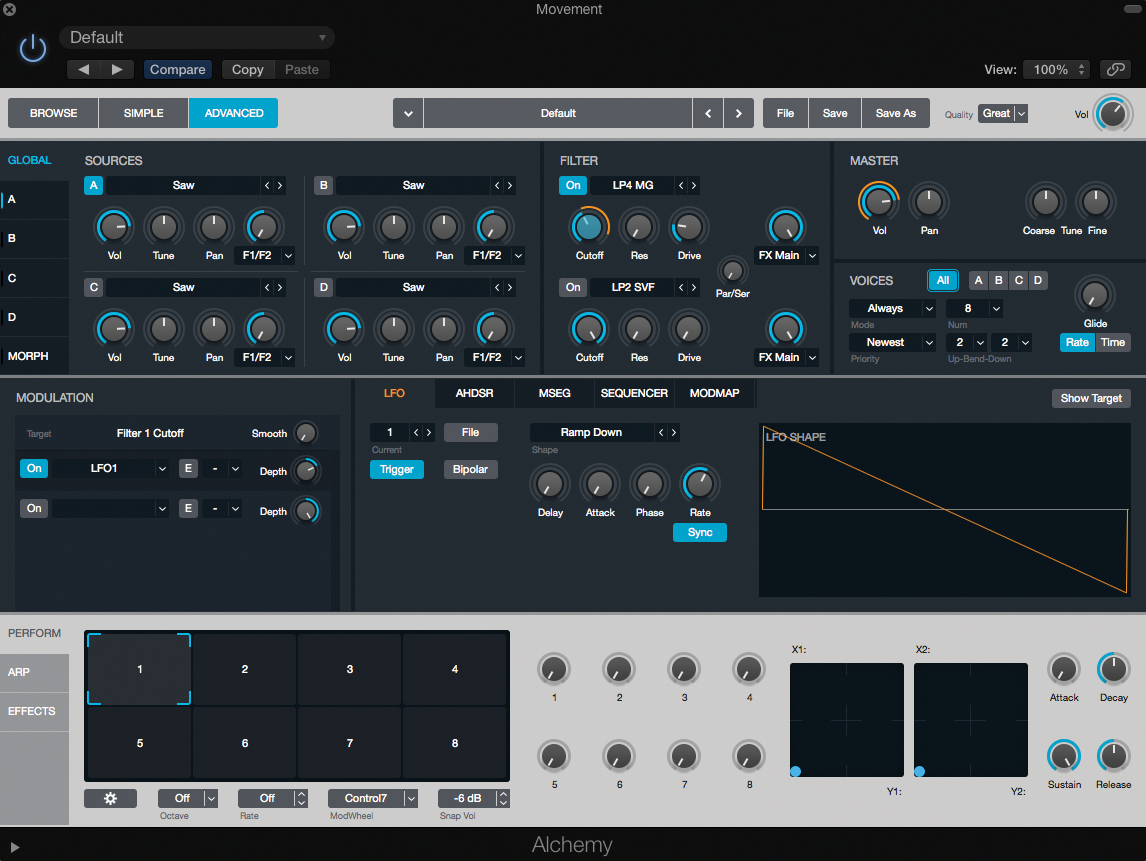 3: For the LFO Shape control, select the Ramp Down option, so that it sounds like a continuously retriggered envelope. Ensure Sync is set, position the rate to 1/8, and disengage the Bipolar, so that the LFO works additively to the initial cutoff position.

4: Let’s create an additional form of movement using another LFO. Under the drop-down menu in the Modulation section you can find an option to create a new LFO. Move between the two LFOs using the current parameter as part of LFO display. 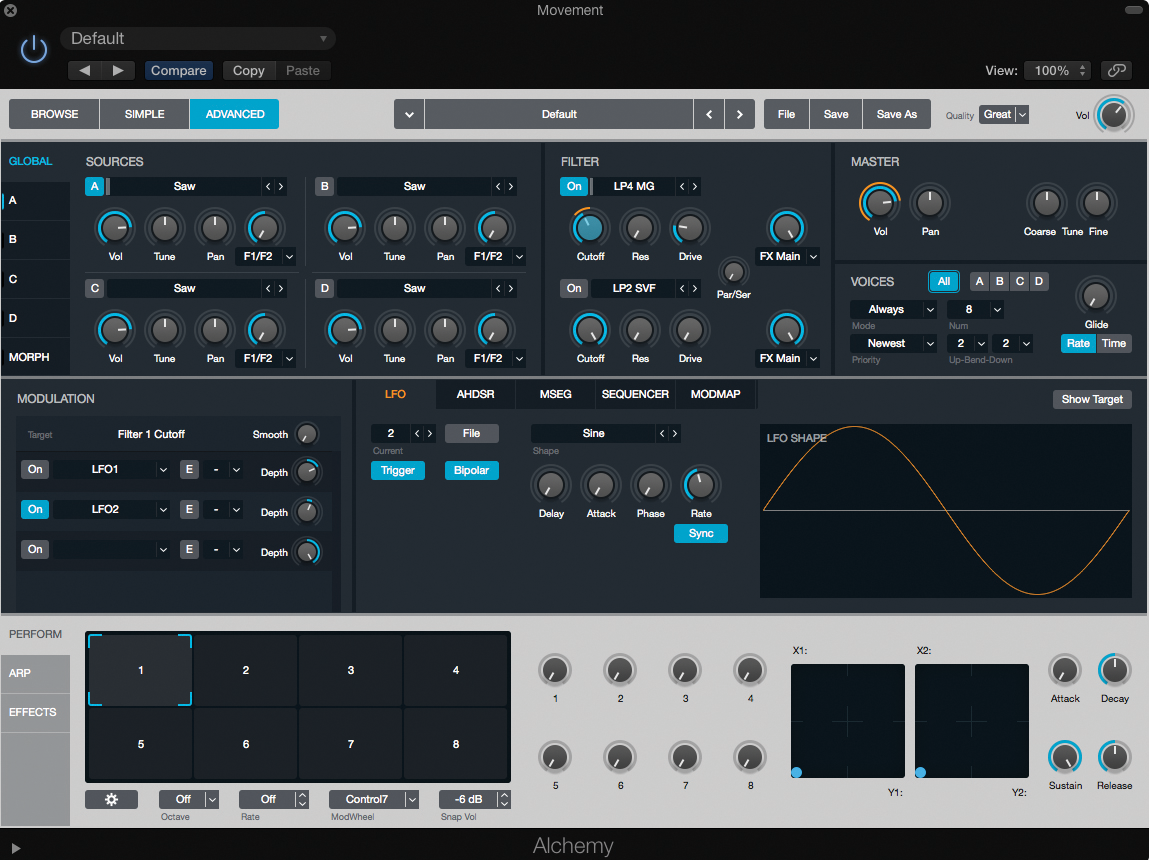 5: On the second LFO, we’ll use the standard sine waveshape, but select a rate that’s different to LFO1 (1/4* would be a good option). The trick is to use a small amount of depth for the modulation, creating a subtle undulation effect.

6: The addition of effects is often an important part of these ‘movement’ sounds. For a pulsing pad sound, try a combination of tempo-synced Stereo Delay (on 1/8 Note Dotted) and a large Space Designer reverb setting of around six seconds.