by MusicTech
#Cakewalk By BandLab#Recording#Studios
Tutorials

Kitting Out Your Studio Tutorial

There are more options open to the average producer these days in terms of equipment and working methods than there has ever been before. At one time, hardware was king, and you needed both the space and the money to be able to take advantage of it. And while that kind of setup is still something […] 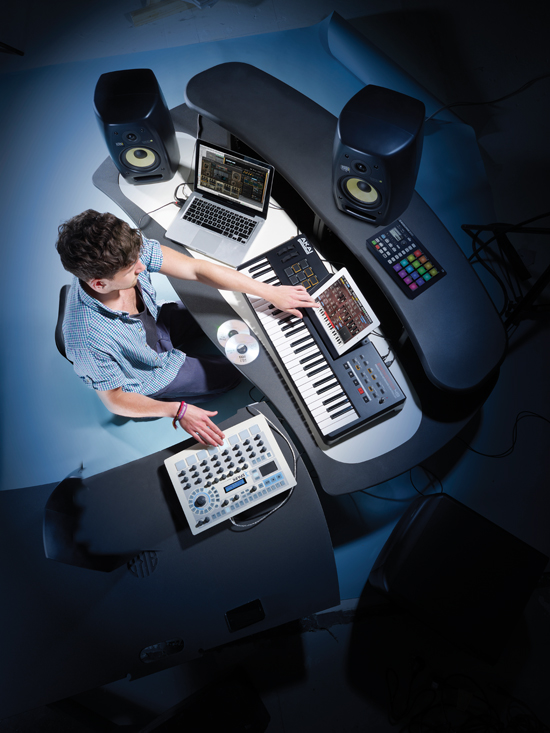 There are more options open to the average producer these days in terms of equipment and working methods than there has ever been before. At one time, hardware was king, and you needed both the space and the money to be able to take advantage of it. And while that kind of setup is still something that appeals to many, a whole new world of software and computer-based working has opened up the production process in ways that would have seemed like fantasy just a couple of decades ago.

You can now do stuff on a laptop that you would once have needed a whole recording studio to achieve, as well as things that would have been impossible in even the most sophisticated studios of the day. The two don’t always sound exactly the same of course: you get a different sound from recording a real drum kit than you do if you sequence drums, but increasingly that difference is getting less and less noticeable. What’s more, there are sounds now that you couldn’t make using real kit even if you tried. Mashed-up beats, dubstep basses and the like are all constructs made possible by software, which is generally much cheaper than hardware and much more flexible. The really important thing when planning or kitting out a studio or a setup, therefore, is to understand what it is you’re going to be doing and choosing the right equipment for the job. This needn’t cost the earth, either, and buying smart is often better than buying big. Read on to find out how to make an informed choice… 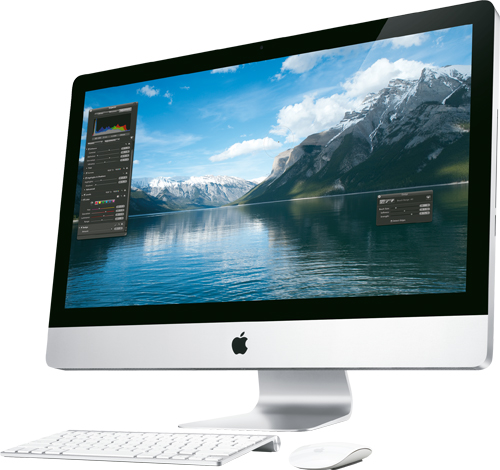 An iMac is a good choice for mid- to high-level music production.

The most fundamental question you have to ask when planning a studio or a purchase is whether you’re want to go predominantly down the software or hardware route. Very few people use purely one over the other, and most setups are a combination of the two. Large studios will have a lot of hardware but typically record into software such as Logic or Pro Tools, whereas home studios will rely more heavily on plug-in instruments and effects as these have obvious space-saving benefits and can be called up multiple times inside a project if required. Digital Audio Workstations (DAWs) such as Cubase, Live and Sonar have for years been expanding in functionality to the point that they are now more or less complete music-production environments, if you want them to be. What’s more, we are now at a stage where audio interface technology is sufficiently advanced that for smaller studios at least, a mixing desk can often be an optional extra rather than a necessity.

Like so many other aspects of choosing kit, this is more about having options than there being an absolute right or wrong way to do things. You can still get a mixing desk, small or large, and integrate it into your setup. Alternatively, you can get a capable, DSP-powered interface such as those from Focusrite or Yamaha and do all your routing and monitor mixing in software. 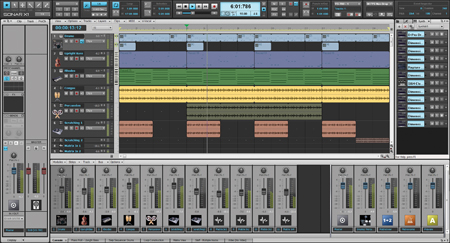 Sonar is Windows-only but comes with a huge amount of sampled content plus instruments and effects, making it an excellent all-round performer. www.cakewalk.com

Some people do work entirely ‘in-the-box’, particularly when producing purely electronic genres such as house or dubstep, since not only do those kinds of music not need ‘real’ sounds recorded through mics much of the time, the synthesized nature of their sounds is key to their appeal. Other people have a guitar, a couple of mics and a small mixer and just record directly into a DAW. Modern recording software is so advanced that it can often be press-ganged into service for more or less any style, though some are better at certain things than others. Pro Tools is preferred for tracking, for example, and Live for looping. Cubase is very good for MIDI programming and FL Studio has some great tools for dance music. These are simplistic examples, and each one obviously has many additional talents, but most can be bent to your will whatever kind of music you are making.

You will almost certainly need a computer to house your recording setup, unless you opt for a hardware recorder. Suffice to mention here that you will want something as powerful as you can afford, with a dual- or quad-core CPU and at least 4GB of RAM, as well as a decent audio interface. Many work very well over USB 2.0, and we will see USB 3.0 and Thunderbolt start to be adopted in the not too distant future. FireWire seems to be on the wane as a technology, though since so much legacy gear uses it, adaptors will be available for some years to come yet. 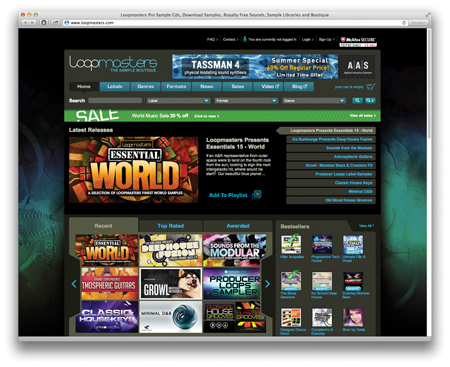 Including loops in your setup means it’s easy to get quickly inspired or back up your ideas with ready-made, professionally produced parts in practically any style.

The vast majority of DAWs will track audio competently and modern hard drives can record so many tracks at once that you’re very unlikely to run out of capacity during recording. Some, such as Reason 6, actually render audio ‘elastic’ as it is recorded, and most others are able to do the same post-recording if you choose to use the feature. At its simplest, recording can be as basic as setting up a click track, a pair of headphones and a mic and recording an acoustic guitar. A free wave editor such as Audacity could actually capture this, but free software lacks the refinements and tool set of commercial software. Still, it’s good to know about.

Recording a band or an ensemble is more complex and will involve multiple mics, either a mixing desk or an audio interface with sufficient inputs – typically ten or more if you’re including a drum kit – and the ability to do some monitor mixing. This also usually requires some space, and you might not get away with doing it in a spare room.  You can be clever and use tricks when recording multiple sources to save on kit. If you don’t strictly need to record everyone at once, for example, lay down the drums first to a click track, followed by the guitars, the vocals and so on. Working in this way, using a smaller number of mics is still perfectly feasible. The only potential downside of this is that you can lose the vibe of having everyone sparking off each other during a performance, so your players need to be good.

If you’re recording an ensemble, try to work out a way to record groups of similar instruments with fewer mics through better mic positioning. This saves on mics, input channels and DAW tracks, and when done properly can make mixing easier too. Some people prefer to have as many individually mic’ed sources as possible, others feel that capturing  a performance works better when some sources are grouped in this way.

Making electronic music used to entail having rooms full of old synthesizers, which isn’t a realistic goal for most people. In fact, electronic music is an area in which technology has completely changed the landscape. All DAWs include some pretty astonishing synths and drum machines, and top marks probably go to Logic and Sonar for the sheer breadth of stuff you get thrown in with the software. With this kind of production you are generally much more reliant on software-generated sounds, and working in-the-box is much more commonplace. Often, the only ‘real’ sounds that feature are vocals, and these can easily be recorded in a bedroom, with judicious use of sound isolation devices such as sE’s Reflexion Filter or SilentPeaks’ Peakulizer to create a pocket of dead space.

Hardware is still used for electronic music of course, with workstation keyboards as well as AKAI MPCs and older kit much loved by many. But modern computers and software are capable of really quite amazing things that we more or less take for granted. You can take a mid-priced DAW and a well-specified computer and be making complex dance music in minutes. Third-party plug-ins tailored to your specific needs are also a great addition to a setup. Many people, for example, love NI’s Maschine and Maschine Mikro as a hardware and software combination for making beats and patterns, and the software side of the platform can even host external instrument and effect plug-ins, making it a programmer’s paradise. Some people produce entirely within Maschine, since it can record and slice audio clips as well as sequence songs.

Film scoring is perhaps the ultimate example of technology taking over from conventional production techniques. At one time, to get the sound of an orchestra and actually have it sound believable you needed to record a full orchestra. Now, advanced sample-based instruments such as Damage, Garritan Personal Orchestra, Vienna Strings, the Ivory grand piano and others make creating lush, authentic soundscapes in your home studio far easier. Keyboard workstations can also be good for this kind of composition, since they are often expandable with genre-specific update cards for woodwind, strings, choirs and so on. The vast majority of DAWs also have support for video playback as well, so scoring to picture is nothing like the headache it used to be when it involved sync’ing to external tape machines using SMPTE. 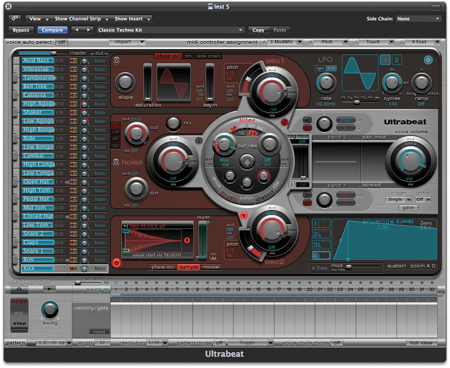 Logic Pro’s Ultrabeat is a powerful drum sampler and synth that can really add punch to any production.

Continue to PAGE 2 of our Kitting Out Your Studio Tutorial