How To Integrate Ableton Live With Your iOS Devices

Ableton Live can enjoy a rich and varied relationship with your iOS devices – by syncing with Link, by using them as hardware controllers, or as sound sources. Here, Martin Delaney explains how… Since 2007, iOS has matured into a sophisticated mobile-computing platform with the hardware to back it up, and some highly evolved apps […] 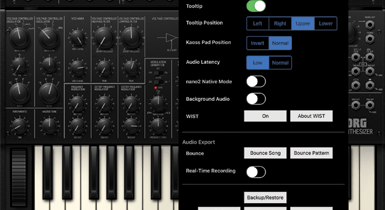 Ableton Live can enjoy a rich and varied relationship with your iOS devices – by syncing with Link, by using them as hardware controllers, or as sound sources. Here, Martin Delaney explains how… 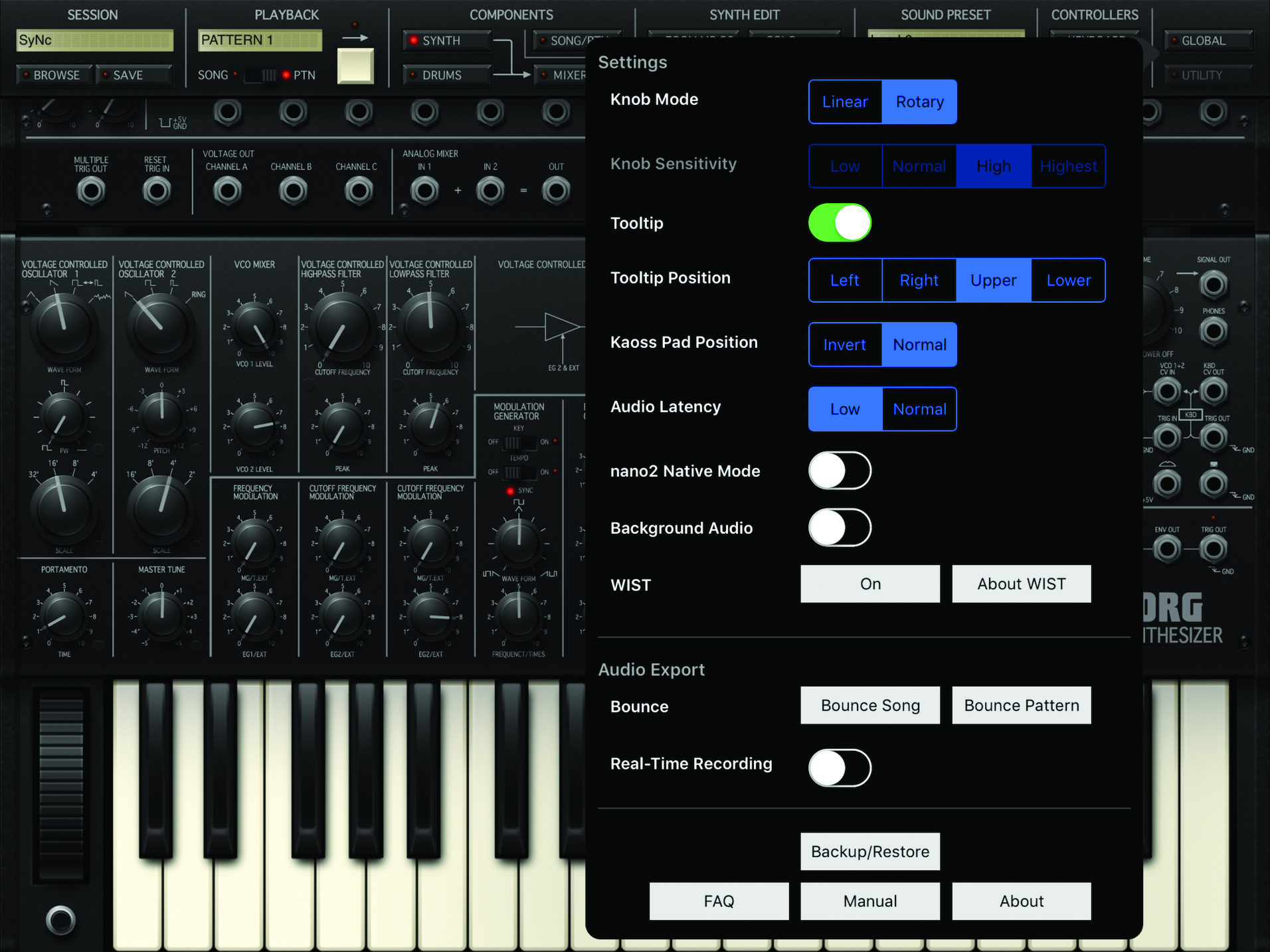 Since 2007, iOS has matured into a sophisticated mobile-computing platform with the hardware to back it up, and some highly evolved apps for music recording, programming, and control. Although Ableton itself has never fully embraced the mobile platform and graced it with an iOS version of Live, its influence is felt in apps that attempt to provide a Live-like experience, apps that support the Ableton Link sync protocol and apps that export their files as Ableton Live projects, ready to open on our computers.

It’s true that it’s a little inelegant at times to get audio in and out of iOS apps; it sometimes requires a few extra steps, but the workflow is getting smoother all the time, and there are apps which make iOS audio management much easier, like AudioCopy, Audiobus, and AudioShare. Apps like Apple’s Voice Memos let you AirDrop recordings, which is fast and convenient.

There’s also no reason why you can’t continue to record audio straight out of your device into Live, courtesy of your audio interface. If you’re using MIDI or Link to sync everything as well, there’s every chance of getting a very neatly cut, ready-to-use clip straight away.

Once you wade through the options and the connection possibilities, you can build a Live/iOS rig that includes MIDI and audio coming from both boxes, in a stable and repeatable setup. The Mac Audio MIDI Setup utility is a fantastic Swiss Army Knife for audio and MIDI routing, and if you’ve never explored it, it’s well worth spending some time to poke around in there. I find that using an ad-hoc connection rather than a router invariably works better.

Music on the move 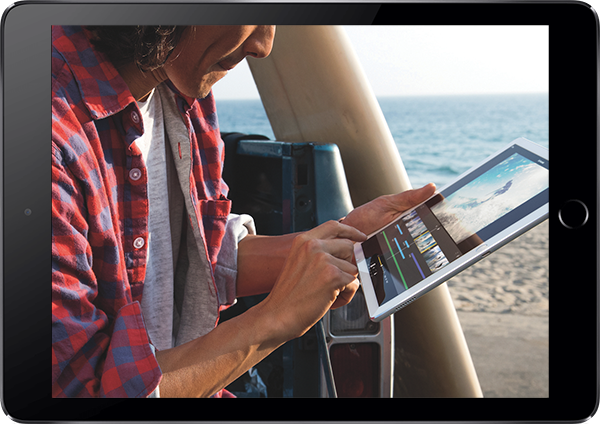 Most iOS music apps run on both iPad and iPhone; and for me, that’s really important for true mobility and the feeling that you can use the same tools to make music wherever you go. Even the controller apps such as Lemur, TouchOSC and touchAble work on iPhone, and Gadget and Blocs Wave will let you create Ableton Live projects from your iPhone or iPad, which still blows my mind a bit. Maybe I’m just easily impressed! Having said that, at the moment, I believe the 12.9-inch iPad Pro is the best possible option for iOS music.

Whatever else you might feel about Apple and iPads and iPhones, the multi-touch functionality works undeniably well and the range of apps available is amazing. A full-sized regular iPad, or ideally the larger iPad Pro, is a great synth and DAW host – but also makes arguably the most powerful and flexible MIDI control surface on the planet.

As Live users, we can take advantage of touchAble, which is specific to Live, and provides very deep device control, as well and clip and scene launching, a mixer, a keyboard, pads, as well as a custom configurable area.

Plus, touchAble is available as separate iPhone and iPad apps, and the device controls are an in-app purchase that’s well worth having. This one’s really hard to beat for Live use; put TouchAble and Push together, and you’ve got it all.

There are more ‘DIY’ controllers, such as Lemur and TouchOSC, where you can use a library of objects to build your own personalised control surface. Both Lemur and TouchOSC run on either iPhone or iPad with a single purchase.

If you’re open to something more idiosyncratic, particularly if you’re more interested in performance and gesture-based control, you should look at AC Sabre, an iPhone app which combines onscreen buttons with the iPhone’s gyroscope and accelerometer to send MIDI notes and CCs, creating a unique ‘instrument’ approach.

If you’ve spent any time configuring game controllers like the old Wii Remote Control for MIDI, you’ll take to this, and also appreciate that it’s a little easier to get advanced results.

I guess you could use AC Sabre with an iPad, but it’d be like waving a big expensive glass dinner plate around. For day-to-day Live control, I use Push; for mobile purposes, I use touchAble on the iPad Pro; when I need something more boutique, I build it in Lemur (also on the iPad Pro). The other great advantage with the iPad as a control surface over hardware is that if you switch DAWs, it follows right along – Apple’s free Logic Remote app is great for Logic Pro X users, for example.

In a further instance of Live/iOS integration, there are a few apps that can export files as Live projects – e.g. Korg’s Gadget and iKaossilator, and Novation’s Blocs Waves – bringing Live and iOS much closer together.

This process will get you a Live set containing audio clips exclusively, with tracks and scenes as applicable, but no MIDI. Interestingly, Korg has announced Gadget for Mac, which is completely compatible with the iOS versions, but with the layout optimised to use larger displays (and obviously no touch screen). I hope this doesn’t threaten the included Ableton project support on the iOS versions: that would be a real shame.

According to the announcement, though, the desktop version will support Ableton Link, just as the iOS ones do. Also, it seems the Gadget synth and sampler instruments will be installed as separate AU/VST plug-ins, so you can even run them inside Live.

This is the best possible example of blurring the lines between iOS and Mac OS. I’m not a Windows user, but I’d like to see Gadget make it over to the Windows world as well, so it becomes a true cross-platform DAW that everybody can use. Just to be extra-thorough, a purchase of Korg Gadget also includes a free Ableton Live Lite download.

iOS is a friend and playmate for your Live setup, and can merge perfectly with Push or any other hardware controller – make the most of it! 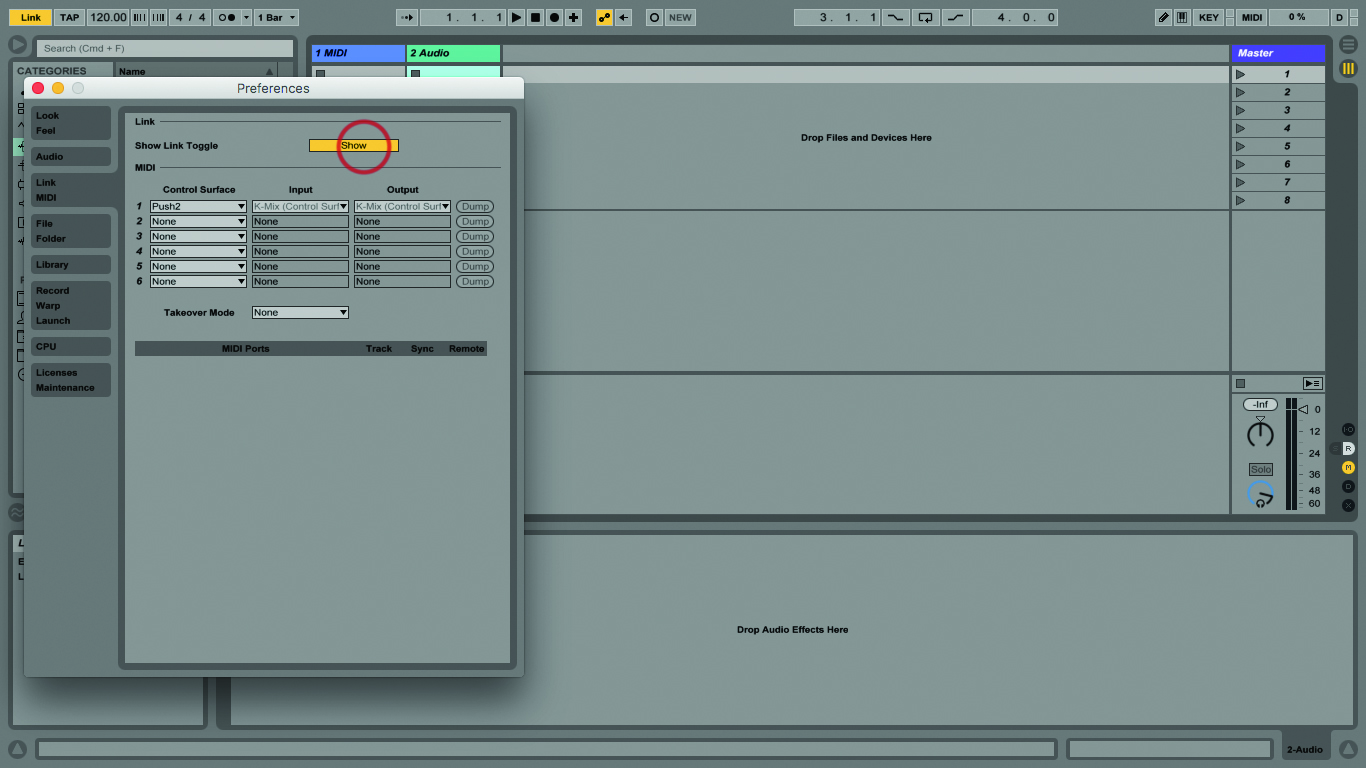 1. Ableton Link is an awesome tool for syncing iOS apps to each other, and to Ableton Live, over Wi-Fi. MusicTech.net has a separate, in-depth tutorial covering this aspect of Link’s capabilities. 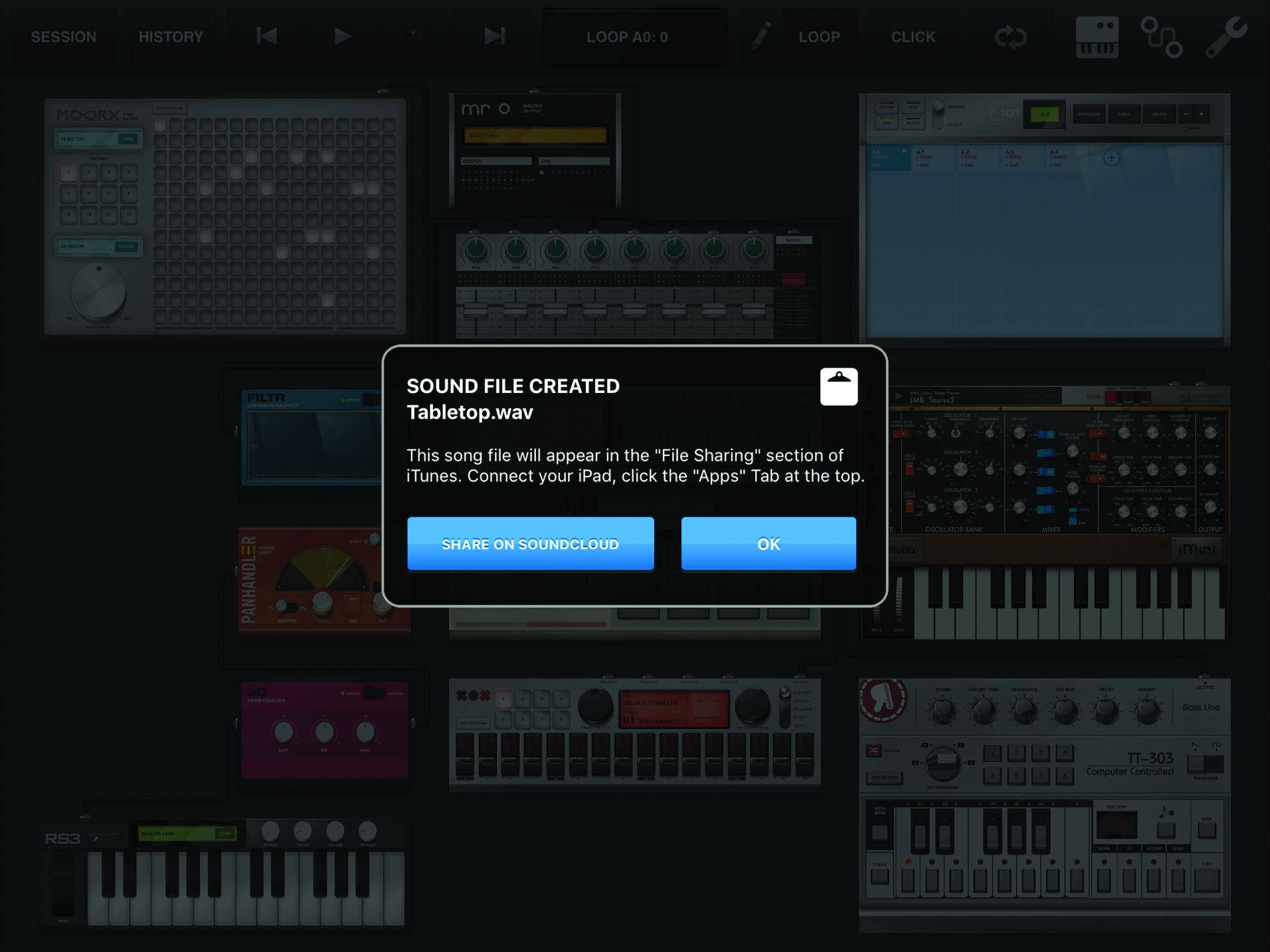 2. You might want to include audio from your iOS app in your Live productions. How this works will depend on the app, but many of them rely on iTunes File Sharing.

3. Let’s use Tabletop as an example. Here, I have a little sequence that I want to get into Live. The first step is to save that as an audio file, stored on the iPad itself. 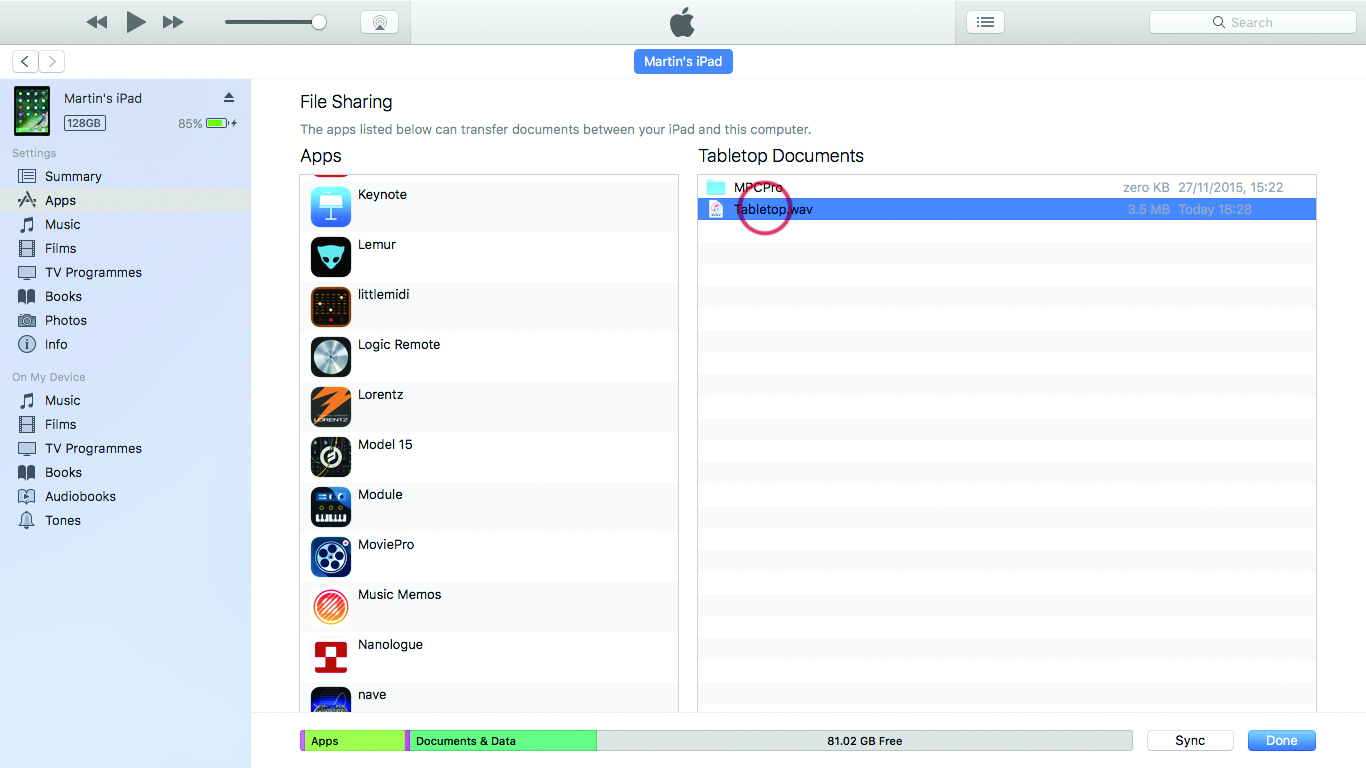 4. When I connect the iPad to a Mac, I can access that audio file from within iTunes. Other apps might have different sharing options – they don’t all work the same way. 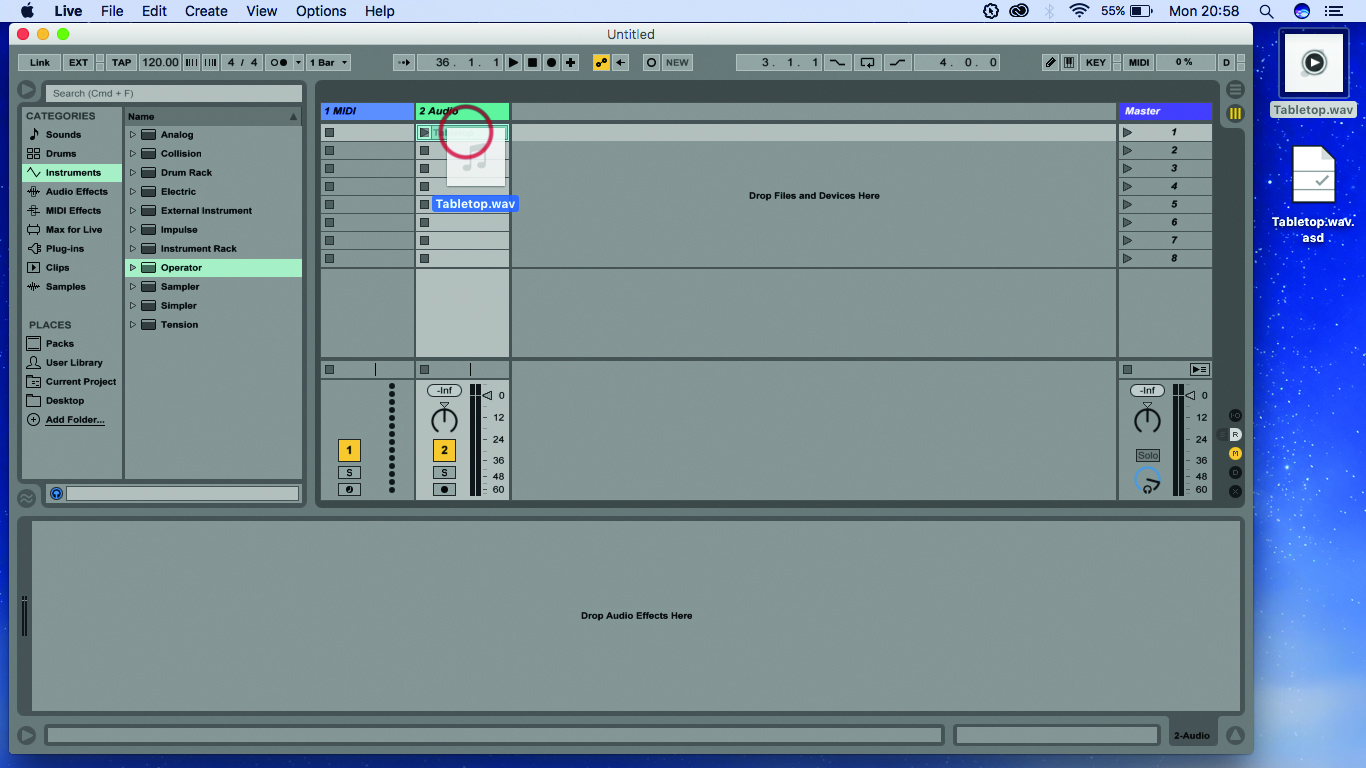 5. There won’t be any format issues: you should be able to drag the resulting audio file straight into Live. If you have a commonly used ‘import’ folder, make a shortcut to it in Live’s Browser. 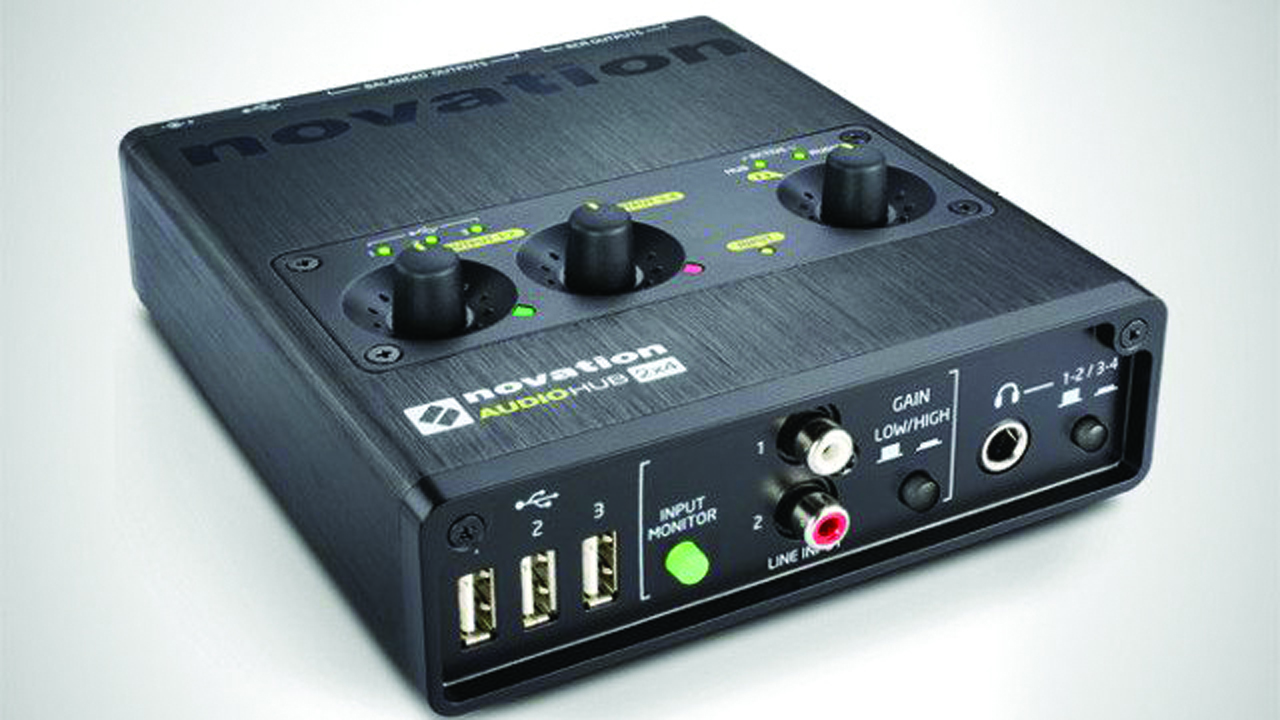 6. Alternately, I can take stereo out from the iPad headphone jack and connect it to my soundcard, configure the inputs in Live and record the audio in, then crop and warp it.