How To Emulate The Pultec EQP-1A

Welcome to a brand new feature where we look at the greatest pieces of classic studio gear and how you can recreate their sound with new hardware and software. To start, John Pickford looks back at the Pultec EQP-1A… Some designs are so inherently right that they live on decades after their contemporaries have been […] 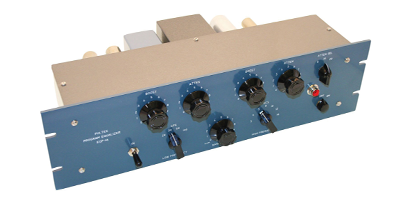 Welcome to a brand new feature where we look at the greatest pieces of classic studio gear and how you can recreate their sound with new hardware and software. To start, John Pickford looks back at the Pultec EQP-1A… 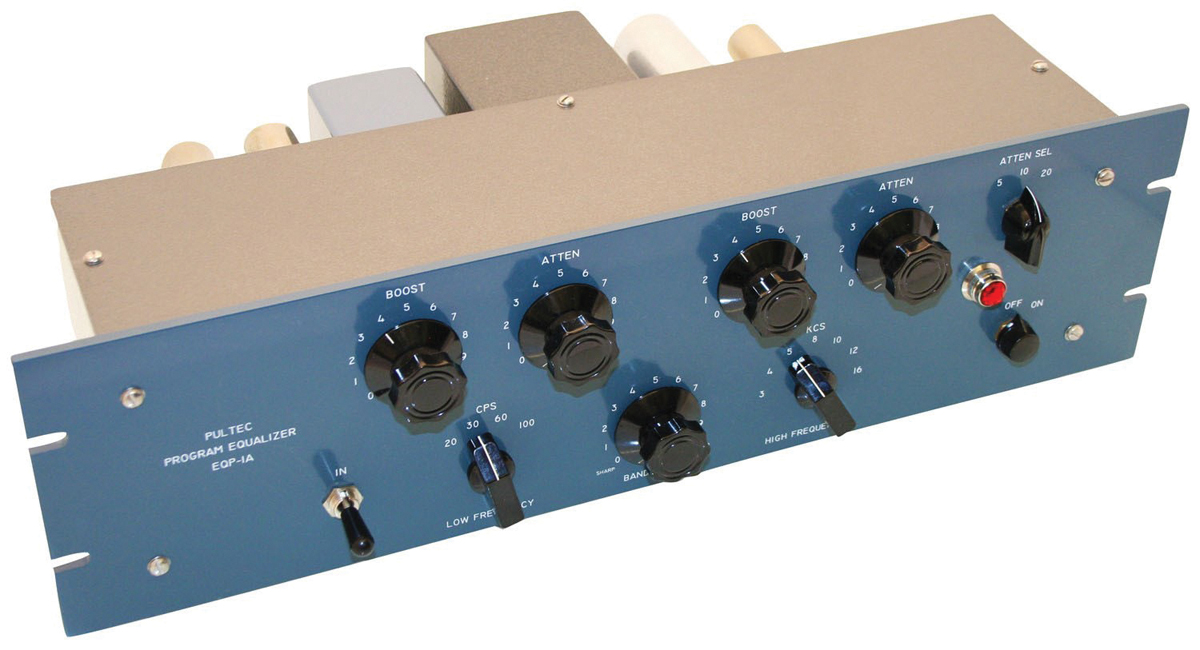 Some designs are so inherently right that they live on decades after their contemporaries have been forgotten. Electric guitars such as the Gibson Les Paul and Fender Stratocaster first appeared in the early 1950s, yet they still outsell a multitude of newcomers and their iconic styling has been copied repeatedly.

The Pultec EQP-1A equalizer is one such design, originally launched in 1951 and remaining in production today. Several manufacturers produce their own take on the original, ranging from exact copies to scaled-down versions incorporated into modern units; the authentic sound of the Pultec can also be heard as a plug-in.

Original EQP-1As were designed and built by Pulse Techniques, a company formed by Ollie Summerland and Gene Shank in Teaneck, New Jersey, USA. The small township of Teaneck holds a special place in the hearts of sound recording historians, as it’s not only the birthplace of the legendary equalizer, but also the town in which Les Paul (co-designer of the guitar that bears his name) set up the world’s first multi-track recording studio. Summerland and Shank hand built the very first units, named the EQP-1 and, following an early modification to the design, the EQP-1A was made available to recording and broadcast studios.

The Pultec is known as a program equalizer, meaning it can be used to shape the tone of finished recordings as well as individual sources, making it an effective mastering EQ. It’s a 3U all-valve design that makes use of EEC 82 and EEC 83 valves alongside the 6×4 valve in the onboard push-pull amplifier. Operating as a no-loss passive equalizer, the amplifier restores the signal level that is reduced when audio is fed into the unit.

This means that the signal level remains the same regardless of whether EQ is switched in or out, which is useful when comparing a flat signal to an equalized one, deftly avoiding the ‘louder is better’ trap.

There are three sections to the equalizer, with the low-frequency section operating as a shelving EQ, providing four frequency bands at 20, 30, 60 and 100Hz. These frequencies can be boosted to a maximum of 13.5dB and attenuated (cut) by 17.5dB. As the boost and cut frequencies overlap, it is possible to create some interesting EQ curves by boosting and cutting a frequency simultaneously.

If the frequency selected is 100Hz and both the Boost and Atten (cut) controls are turned to 7, the EQ curve displays a ‘midrange droop’ centred on 1kHz. But if the Atten pot is returned to zero and the boost is still applied, the low-end frequencies remain the same but the droop disappears.

This method has become known as the ‘Low End Trick’ and is one of the Pultec’s most useful features. The original manual advised that the Boost and Atten controls should never be used at the same time. It’s ironic, then, that the unit’s ability to do just that has helped earn its iconic status.

The Pultec’s high-frequency section features a boost-peaking EQ and offers seven centre frequencies – at 3, 4, 5, 8, 10, 12 and 16kHz – which can be boosted by up to 18dB, while a Bandwidth control alters the Q of the equalization curve from sharp to broad. The high frequencies can also be cut at 5, 10 and 20kHz. This is a shelf cut with up to 16dB of attenuation available.

The Pultec EQP-1A can be heard on thousands of recordings including almost all of the Tamla Motown productions from the 1960s. It is a first among equalizers.

EQP-1A in use – The Low-end Trick
Simultaneously boosting and cutting the low frequencies can produce musically pleasing results. Bass drums can be enhanced by selecting 30Hz and dialling in similar amounts of boost and cut.

This gives a smooth peak centred around 80Hz, providing some low-end heft while scooping out some low-mids where the sound can be a bit muddy. The EQP-1A’s HF section can then be used to add definition to the click of the beater by boosting at 3, 4 or 5kHz, while the sound can be rounded off nicely by gently attenuating the extreme top.

Get the Pultec Sound In Hardware
You’d be surprised at how many companies there are producing boutique outboard gear these days – studio hardware has made a comeback in recent years. With such a great reputation, the Pultec was always bound to be a target for these companies, so there are a good number of clones.

The one that stands out and calls itself a ‘continuation’ rather than a remake is the Pulse Techniques EQP-1A3, designed and manufactured to the original specifications to ensure that it sounds just as the original models did when new and fully on-spec. It was developed by Steve Jackson, who ‘committed to faithfully recreate Eugene Shenk’s original Pultec’. It’s the most expensive of the hardware units you can get, but arguably the best.
Price £3,400
Web www.pulsetechniques.com

London-based company Cartec Audio produces a faithful recreation of the design, replacing the original blue-grey finish with a nice shade of British Racing Green for its EQP
Price £2,100
Web www.cartecaudio.com

Tube-Tech (Lydkraft) of Denmark offers the EQ PE 1C, similar to the EQP-1A but with added mid/high-frequency boost options at 1, 1.5 and 2kHz.
Price £2,100
Web www.tube-tech.com

Californian company Manley employs EQP-1A-style curves in both single-channel and stereo units. Warm Audio has its 2U EQP-WA, which retains the HF boost options of the Pultec and adds 3 and 4kHz to the HF Atten (cut) section. This is currently the most affordable way to get a valve-based Pultec-styled equalizer.
Price £549
Web www.warmaudio.com

Finally, you can (or could) build one your self from companies such as RecPro Audio, which had a DIY kit for sale for $1,645. These are currently not in stock, but you can get more information from the website.

Get the Pultec sound in software
Santa Cruz-based Universal Audio produces some of the most respected digital simulations of classic recording equipment. The UAD Pultec is modelled on a specially selected ‘golden’ EQP-1A and, just like the analogue units, subtly enhances source material even when no EQ boost or cut is applied.
Price £229
Web www.uaudio.com. 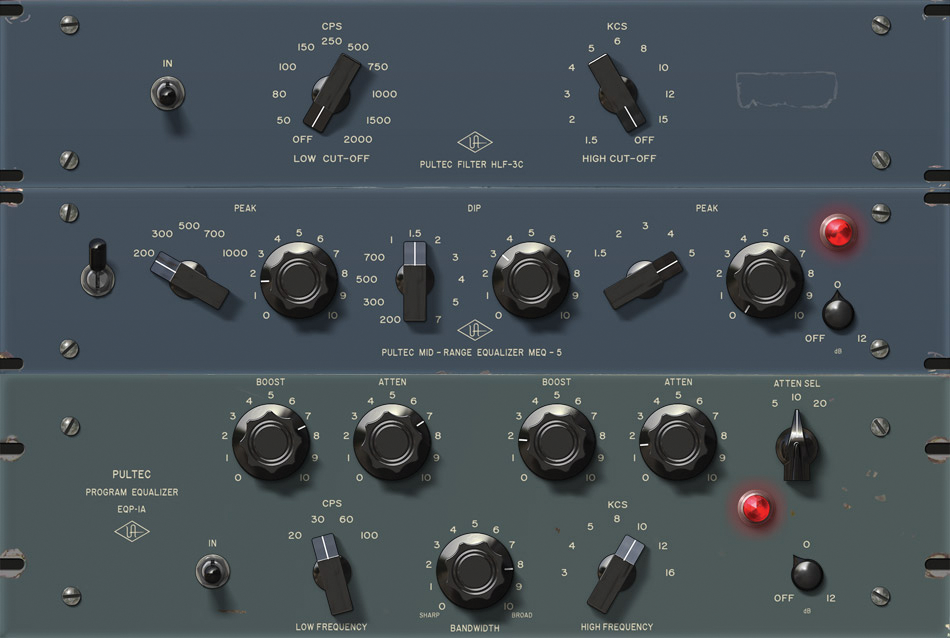 Sonic Signature
The term sweet-sounding could have been coined to describe the Pultec EQP-1A . The boost-peaking high-frequency control can be used to add a warm, natural presence at the lower settings with a broad bandwidth Q, while the 16kHz setting adds a wonderful sense of air and space that is superb on vocals. The low-frequency shelving boost adds real low-end heft to all manner of audio, from completed mixes to individual instruments, while employing the Low-end Trick will shape your sound in an intuitively musical way.