You can use the delay matrix on this experimental freeware soft synth to help build unique, feedback-boosted pads. 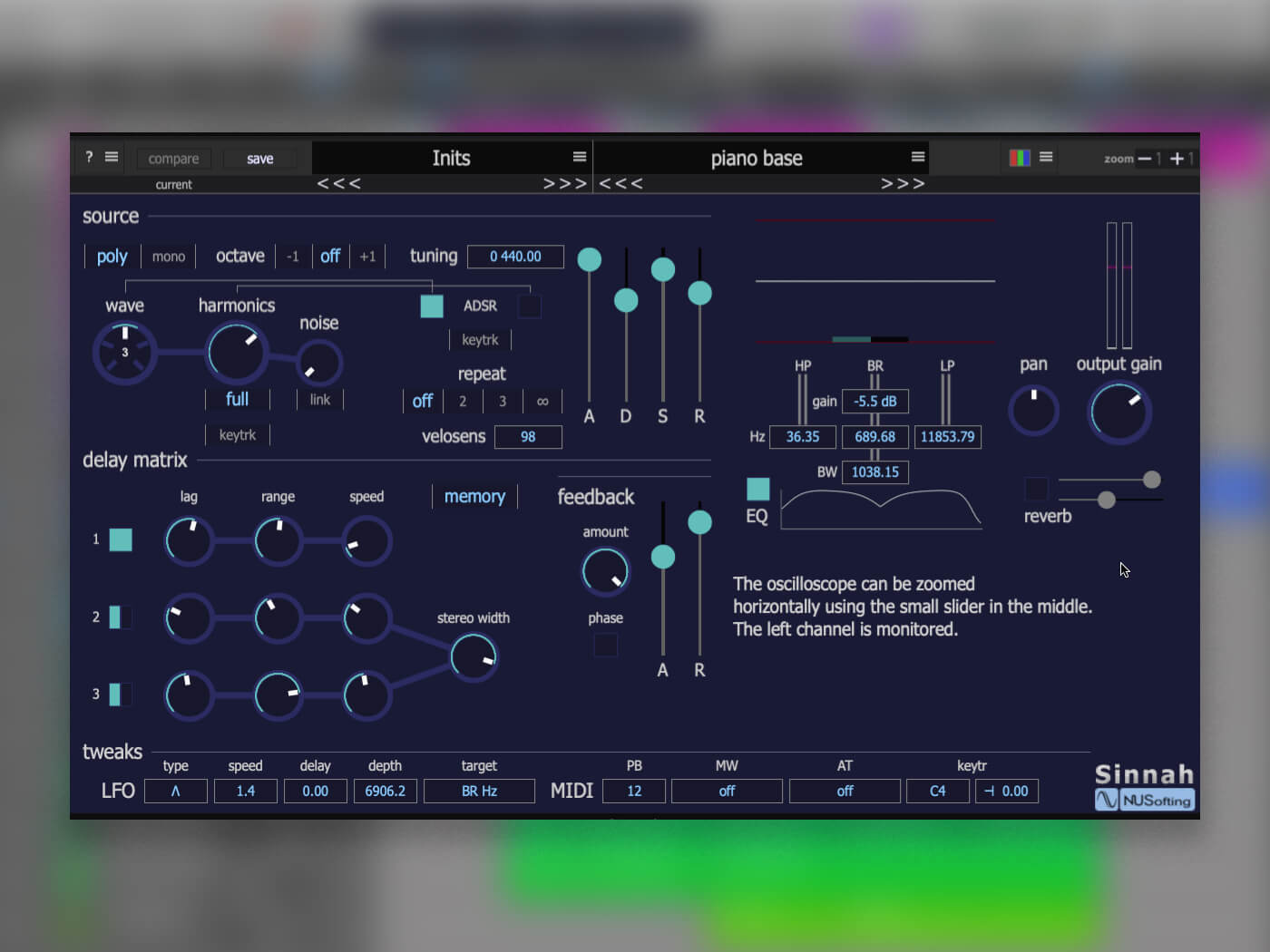 With ambient music, where less is often more, it’s all about using unique and ear-catching sounds. One way to achieve this is by reaching for an instrument with a more experimental approach to synthesis. Enter Sinnah, a freeware virtual analogue soft synth from NUSofting.

Although it appears fairly simple, with a single oscillator, ADSR envelope and LFO, this simplicity belies an unusual approach to synthesis, one that makes extensive use of feedback thanks to its powerful delay matrix.

Before we get into coaxing ambient pads out of Sinnah, let’s take a whistle-stop tour of the instrument, as this will help us get to grips with what exactly it can do.

Jack into the matrix

Open Sinnah in your DAW. It loads with the default AaaaA preset, which is great for getting the lay of the land. In the upper left is the Source section. This is the oscillator. There are five Waves, which start as simple sines but can be made more complex by adjusting the Harmonics dial. As the waveforms are not labelled, look at the oscillator for visual confirmation. The Full button below the Harmonics dial allows for the greatest expression of harmonics.

You can assign the ADSR envelope to the Wave type and Harmonics dial. Try turning these off and on to see how they sound.

Next, let’s check out the Delay Matrix. There are three delay lines that feed into each other. Each delay line has its own LFO, a kind of smoothed out sample-and-hold. Additionally, each voice has its own matrix, so playing the maximum eight voices will result in 24 delay lines and 24 LFOs all doing their own thing.

There’s also a feedback control, which gets saturated by a waveshaper at higher levels. The feedback AD envelope can also affect the feedback. It can get pretty hairy, so be careful at extreme settings.

Now that we have a handle on the basics, let’s make some ambient-ready pads.

Let’s start with a Solina-style string ensemble patch. The triple delay section is perfect for simulating a bucket brigade delay-style chorus circuit, such as the Roland Dimension D.

Start by calling up the piano base patch under the Inits subheading. This gives us a simple sine wave. Uncheck the box linking the Harmonics to the ADSR. Turn the Harmonics dial to 3 or 4 o’clock to add more harmonics. Now we should have a sawtooth-like waveform. You can hear how the Harmonics dial acts as a low-pass filter. Turning on keytracking will add more high-frequency content the higher up the keyboard we play.

Let’s set the ADSR next for a suitably pad-like shape. The envelope on Sinnah is pretty fast so push the settings right up to the top, with decay longest. You can follow your progress with the envelope diagram that appears in the lower right.

It’s time for chorus and modulation. Click the on square for each of the delay lines. It doesn’t need to be too loud so just one click – resulting in half the square lit – is fine. Using the Lag dials, we can create short delays that are in tune with the source sound. Try settings of -7 for a fifth, -24 for two octaves, and -12 for one octave.

Play with the Range and Speed settings until you get something that sounds good. Set the Stereo Width to about halfway to open up the soundstage.

Flip the phase to bring the volume down. You can use the feedback AR envelope to shape the sound further. Lastly, turn down the feedback to around 11 o’clock to bring things a little more under control.

Finally, use the high-pass and low-pass filters in the EQ section to take out unnecessary bass that will clutter your mix, and tame the high-end to leave room for melodic elements. Finally, add some reverb to smooth the patch out.

Next, let’s try a haunting organ sound. Initialise the plug-in the same as before using the piano base patch. This time, select Wave 3 for a square wave and turn the Harmonics up to 3 o’clock. Deselect the ADSR from the Harmonics and put it on the Wave selector instead. Now the Wave will change according to the envelope setting.

Set the ADSR envelope with a very slow attack, a medium decay, high sustain and medium release. We’re not going for an actual organ sound, which would require gate-like ADSR settings, but something more floaty.

Let’s create a ghostly delay halo for the main sound. Click the Memory button in the Delay Matrix to give us longer delay times. Set delay 1 to full volume and 2 and 3 to half. Having various settings provides us with unique delays, so play around with the Lag, Range and Speed dials until you get something suitably haunting. Stereo width can go as wide as you like.

To make things spookier, bring the feedback up to 100% with high Attack and Release settings.

Next, turn on the EQ, then cut the highs and lows to tame the sound, and carve out a nice chunk of the middle with the band-reject, labelled BR. Adding motion is vital for this sound. So, at the bottom of the plug-in, set the LFO target to BR Hz with a speed of 1.4 and depth of around 7000. Now the band-reject point will move while you play, adding motion to the pad.

For our final sound, we’re going to create a meditative gong sound. Once again, initialise Sinnah with the piano base preset.

We want a harmonically rich sound, so set the Wave to 5 and bring Harmonics up to about 3 o’clock to introduce more top-end. Click on the Full button and make sure the ADSR is triggering the Harmonics. You should hear an FM-like bell.

As we’re going for a modified percussion sound, we want a fast attack and low sustain, and long Decay and Release times.

Gongs are metallic and inharmonic. We can achieve this using short Lag times set to non-standard harmonic ratios. Make sure memory is turned off and try intervals of -5, -18, and -21 semitones across the three delay lines. Play with the Range and Speed settings, but we find that the 9 o’clock positions sound pretty good.

Next, set the Stereo Width dial to halfway, the feedback up at around 2 o’clock, then short attack and long Release settings. To finish things off, add a little reverb.

And that’s our final patch. These gongs are perfect for meditation, and they’re best played one note at a time, rather than in chords.