Fancy yourself as the next Daft Punk? Or just looking to add a touch of synthetic vocals to your tracks? FL Studio contains numerous methods to generate machine-like voices. 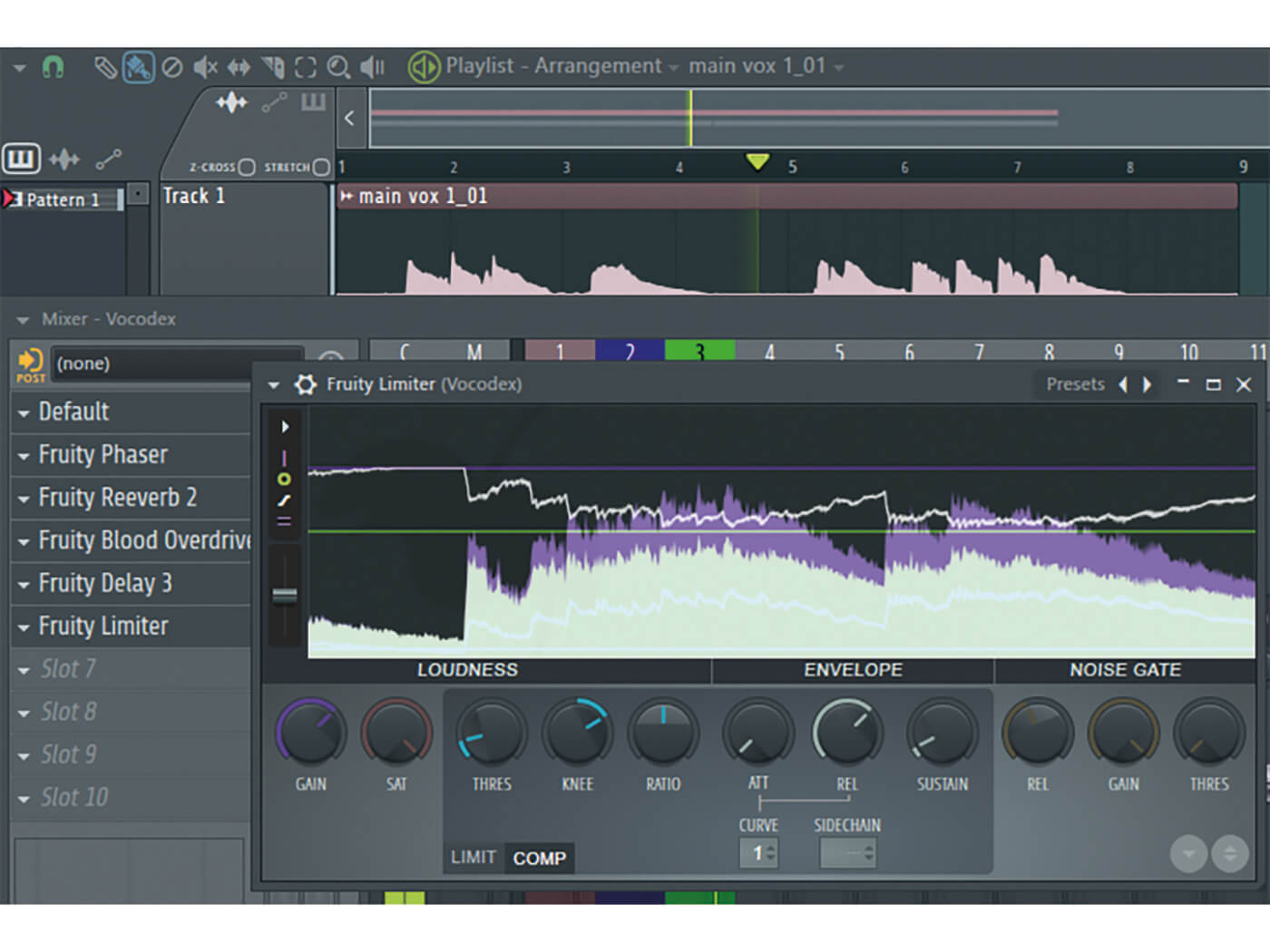 Revolutionary since its invention in 1938, the vocoder has miraculously granted all the power to sing, and has become a staple of the electronic musician’s sound-mangling toolset. And, while most people think of artists like Daft Punk and Zedd when we talk about vocoders, this creative tool was created out of military necessity.

The vocoder was first conceived on the cusp of the second world war when sending high-quality voice via transmission consumed a large amount of bandwidth. Bell Labs scientist Homer Dudley first experimented with degrading audio quality using his newly assembled vocoder. The contraption allowed users to speak into a microphone and hear a degraded copy of their voice which could easily be sent as a simpler telecommunication, reserving precious bandwidth for other needs during the conflict.

The vocoder evolved further in 1959 when German engineers Helmut Klein and W.Schaaf created the Siemens Synthesiser at the Siemens Studio for Electronic Music. Nothing quite like this had been seen before. The machine was equipped with an in-built vocoder and was capable of spanning seven octaves. Technically speaking, the synth was made up of four punch paper vari-speed rolls, which controlled the timbre, envelope, pitch and volume of 20 oscillators. There was also a white noise generator and something called a Hohnerola – a hybrid, electronically-amplified reed instrument similar to the Multimonica. It was used by many European experimental composers throughout the 50s and 60s including Mauricio Kagel, Bengt Hambreus and  Milko Kelemen.

You may be aware of the numerous milestones that Wendy Carlos’s 1971 A Clockwork Orange soundtrack represented. Among these is the prevalence of the vocoder. She was fascinated by the concept of a ‘singing synthesiser’ and used it liberally throughout the synthesised tracks on the record. This was a major revelation for mainstream listeners. Coupled with the emerging stature of German sonic pioneers Kraftwerk, who harnessed the Sennheiser VSM 201 – a vocoderr made in 1977 – on some of their early records. Great examples can be heard on The Robots and Autobahn.

In the 21st century, one of the most iconic vocoder-heavy tracks in the public consciousness is Around The World by Daft Punk. Guy-Manuel de Homem-Christo and Thomas Bangalter have made the vocoder a signature element in the majority of their works, combining the electronic sound of processed vocals with their driving melodies and beats to create multiple chart-bothering smashes. Later, across their 2013 global mega-hit Random Access Memories the duo more skilfully varied live vocals with vocoded, particularly on the ubiquitous mega-hit Get Lucky, to sublime effect.

The exciting thing about modern vocoders used in music production is that the sound created is not simply governed by the voice alone. Modern vocoders use what is called a carrier. The carrier can ultimately be anything but it is most likely that a synthesizer will be used – playing notes in the key of the vocal of the track. This is paired with a modulator which, in a vocoder, is most likely to be the human voice.

For instance, you could have a vocal singing a very flat pitch, just a single note, it could even be spoken word. But using a vocoder you can transform this into a melodic masterpiece. We now have access to such a vast array of possible carriers that some really interesting applications of the vocoder are starting to appear. For instance, it can be used to process bass sounds in dubstep and drum and bass tracks, using huge bass synths to output human shouts and tones. Vocoders have also been used for drums, ethereal vocals and a whole host of weird and wonderful effect sounds. We actively encourage you to bend the rules and use out of the ordinary sound for your carrier and modulators.

In this step-by-step guide, we’re going to be taking you through how to set up a basic vocoder sound in FL Studio. With this basic setup guide, you can build it out and create a more complex patch, but the idea here is to get you started with FL Studio’s two in-built vocoders: Fruity Vocoder and the feature-rich Vocodex. We’ll primarily be working with Vocodex here, but the same principles will apply equally well with Fruity Vocoder. We’ll be using the Sytrus soft synth as our carrier but any synth will work. You’ll likely want something buzzy and harmonic to get the best results but, of course, you’re not limited to that. We encourage exploration and experimentation wherever possible, after all, you’re looking for your own sound. Now, time to clear your throat and get started. 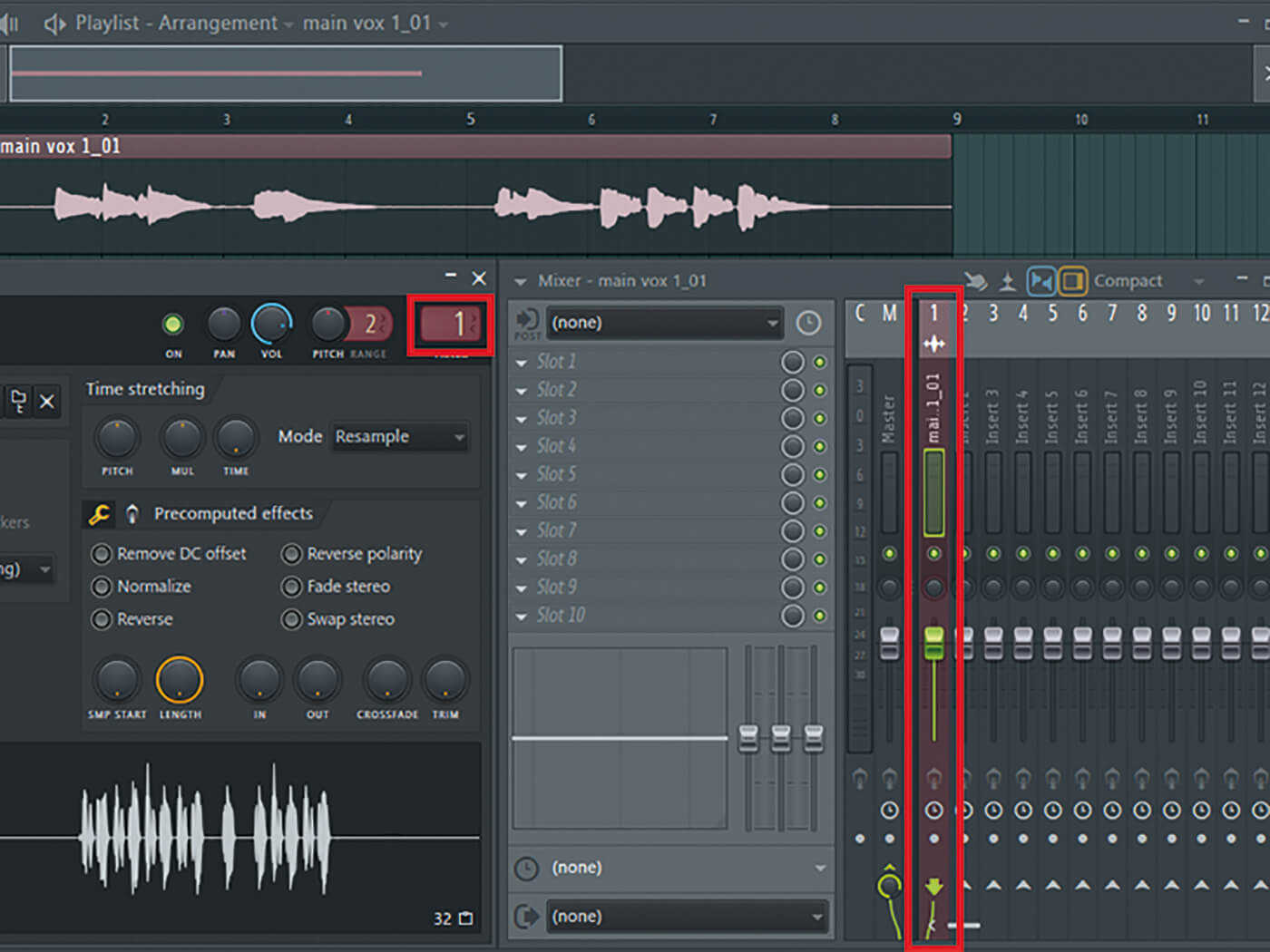 2. Add a synth carrier for Vocoder, it will need to be set up as the next mixer track (2) after the Vocal itself. We’re using Sytrus with preset Vocoder Carriers – Ensemble. 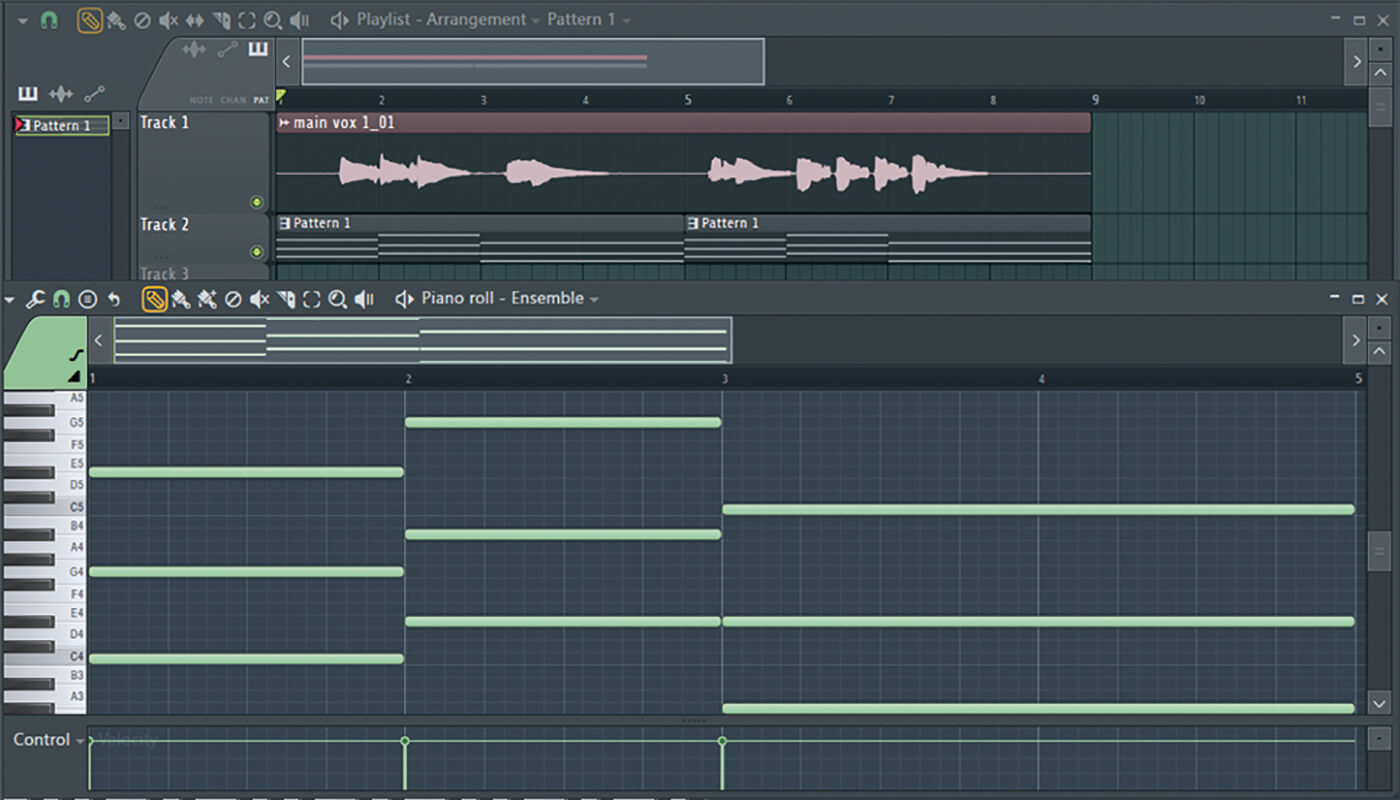 3. Add some notes or chords in a pattern for the Sytrus patch. These will be the notes that are used by the vocoder to harmonise the vocal. Keep it in key with your track. 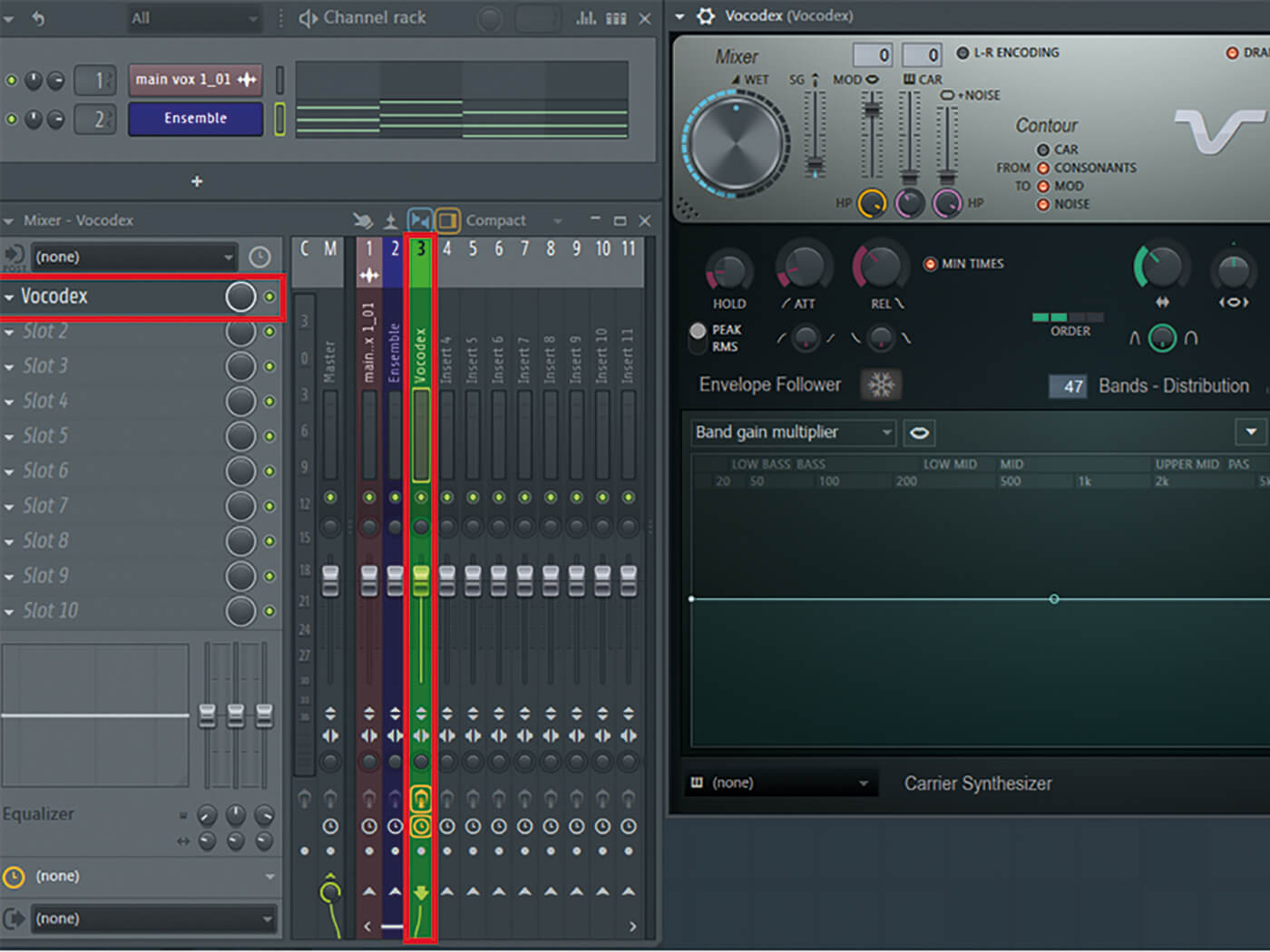 4. Next you will need to add a Vocodex on mixer track three. This will be used for the vocoder effect. Vocodex is the flagship vocoder in FL Studio. 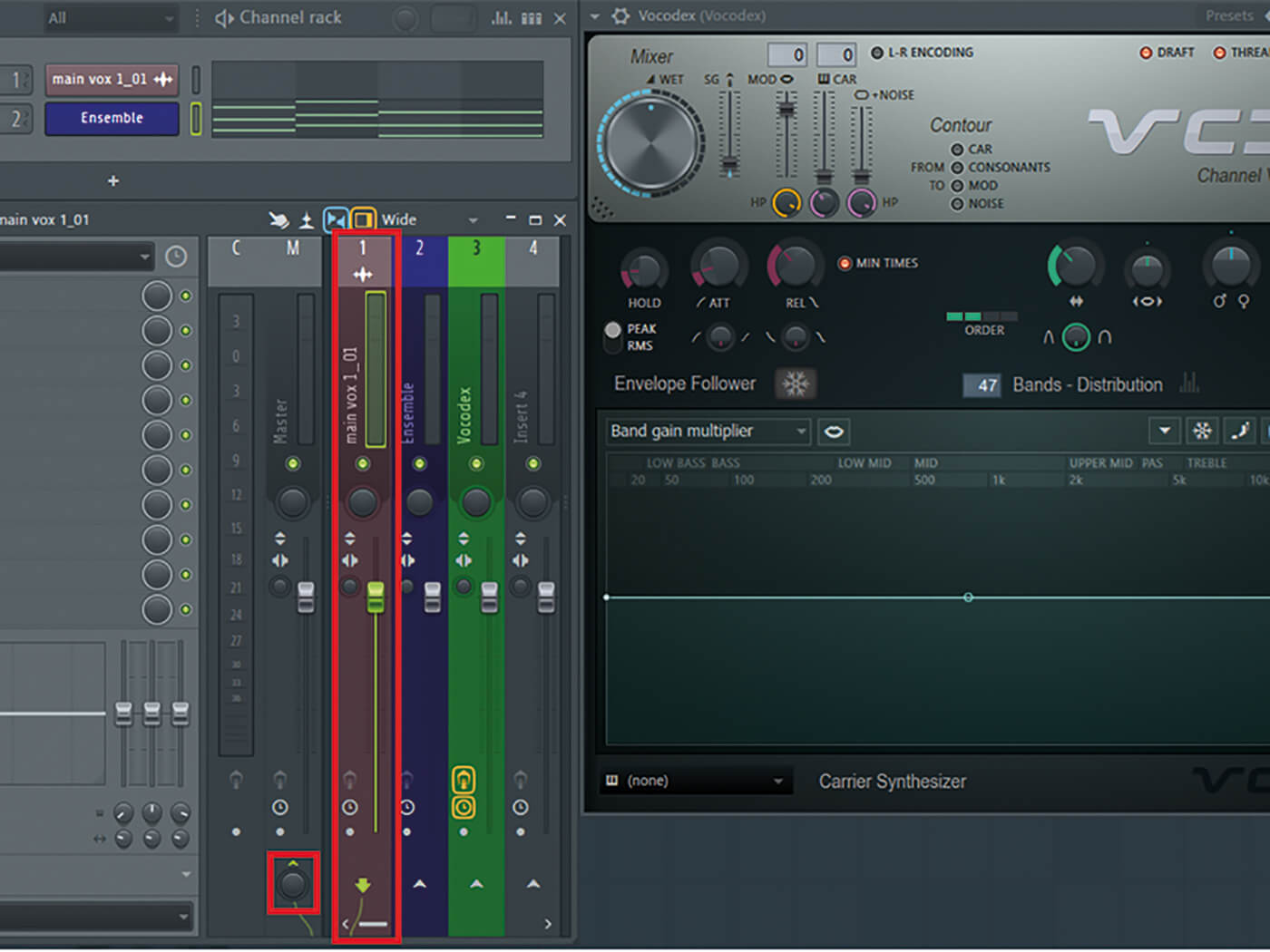 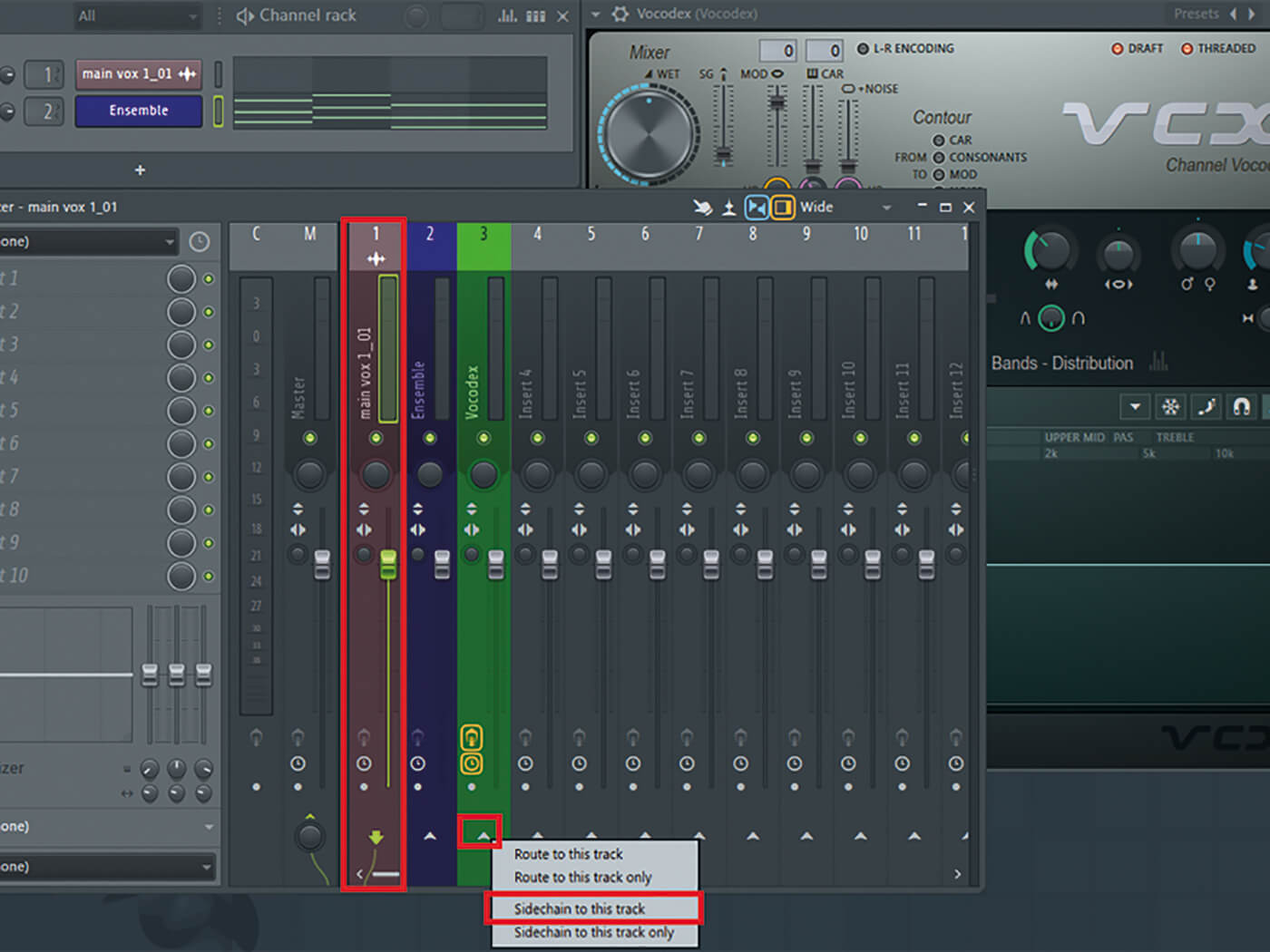 6. While you have mixer track one highlighted, right-click on the routing for the Vocodex channel (mixer track three) and select Sidechain to this track.

FIND YOUR VOICE When choosing your carrier it might be very easy to open up a saw patch and call it done, but it pays to explore new textures and using wavetable synths as carriers and modulating the wave position can lead to exciting sounds! 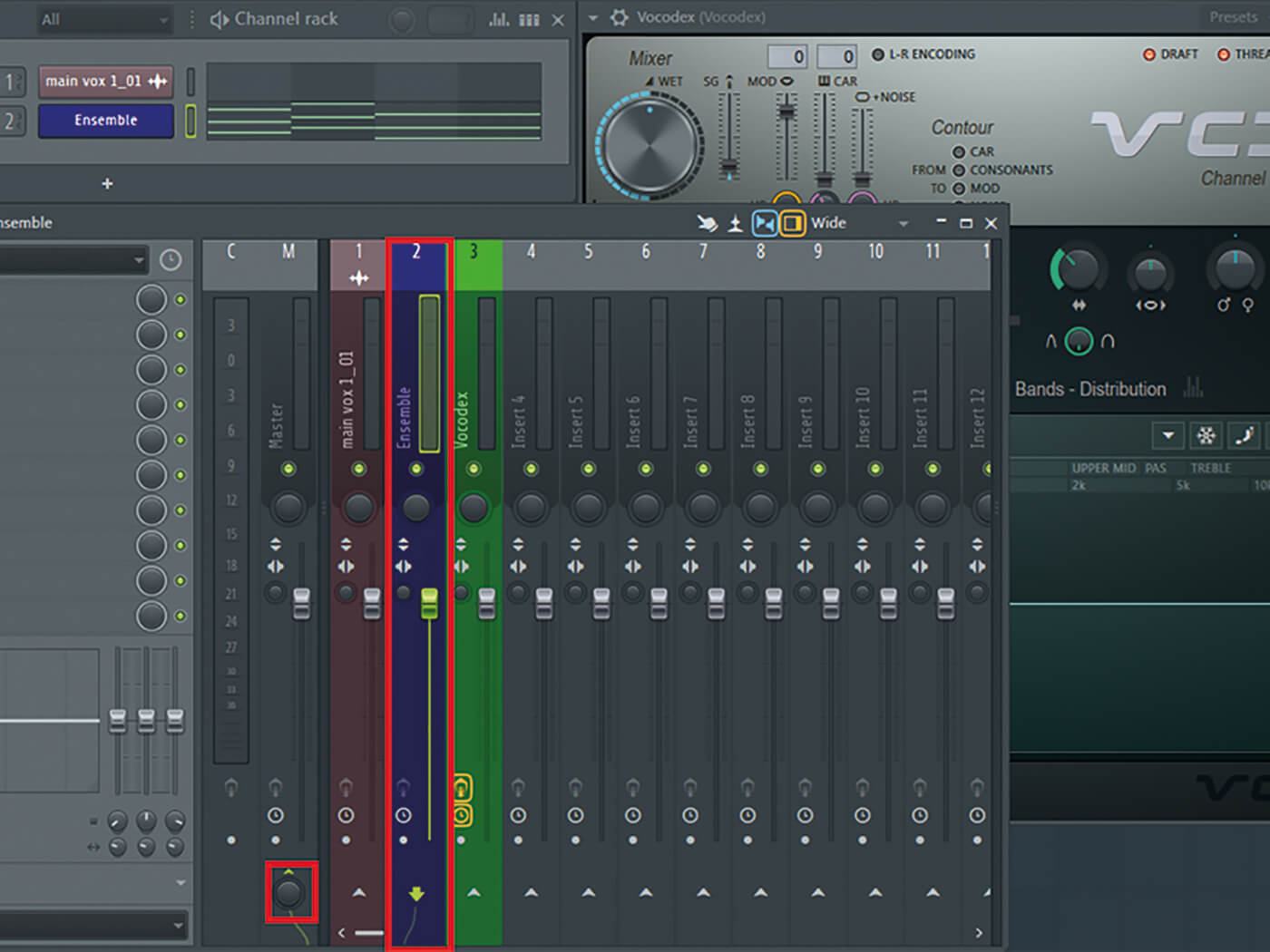 7. Now you will need to select the Sytrus channel (mixer channel two) and turn down the master routing. You will now not hear the original synth patch. 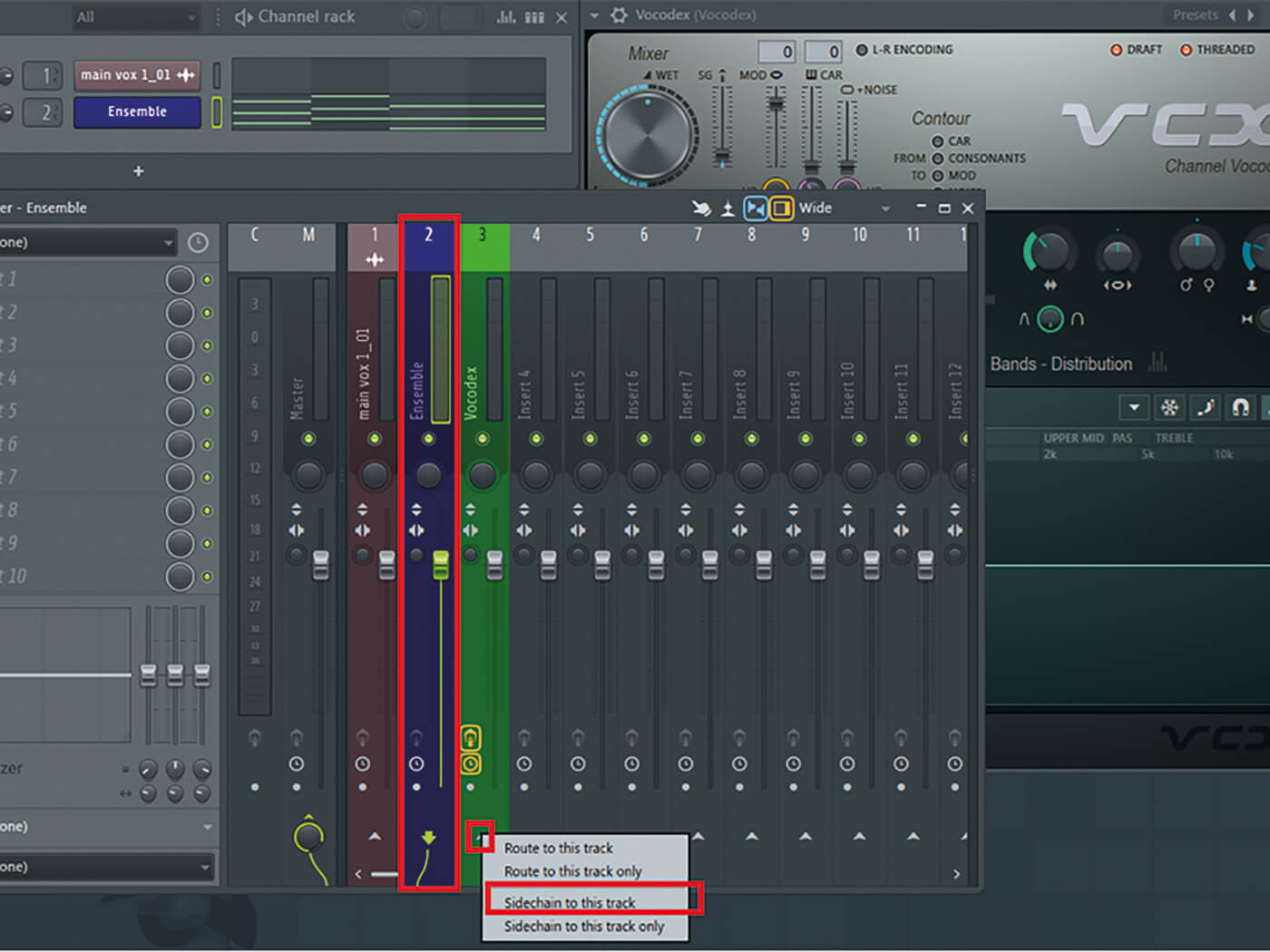 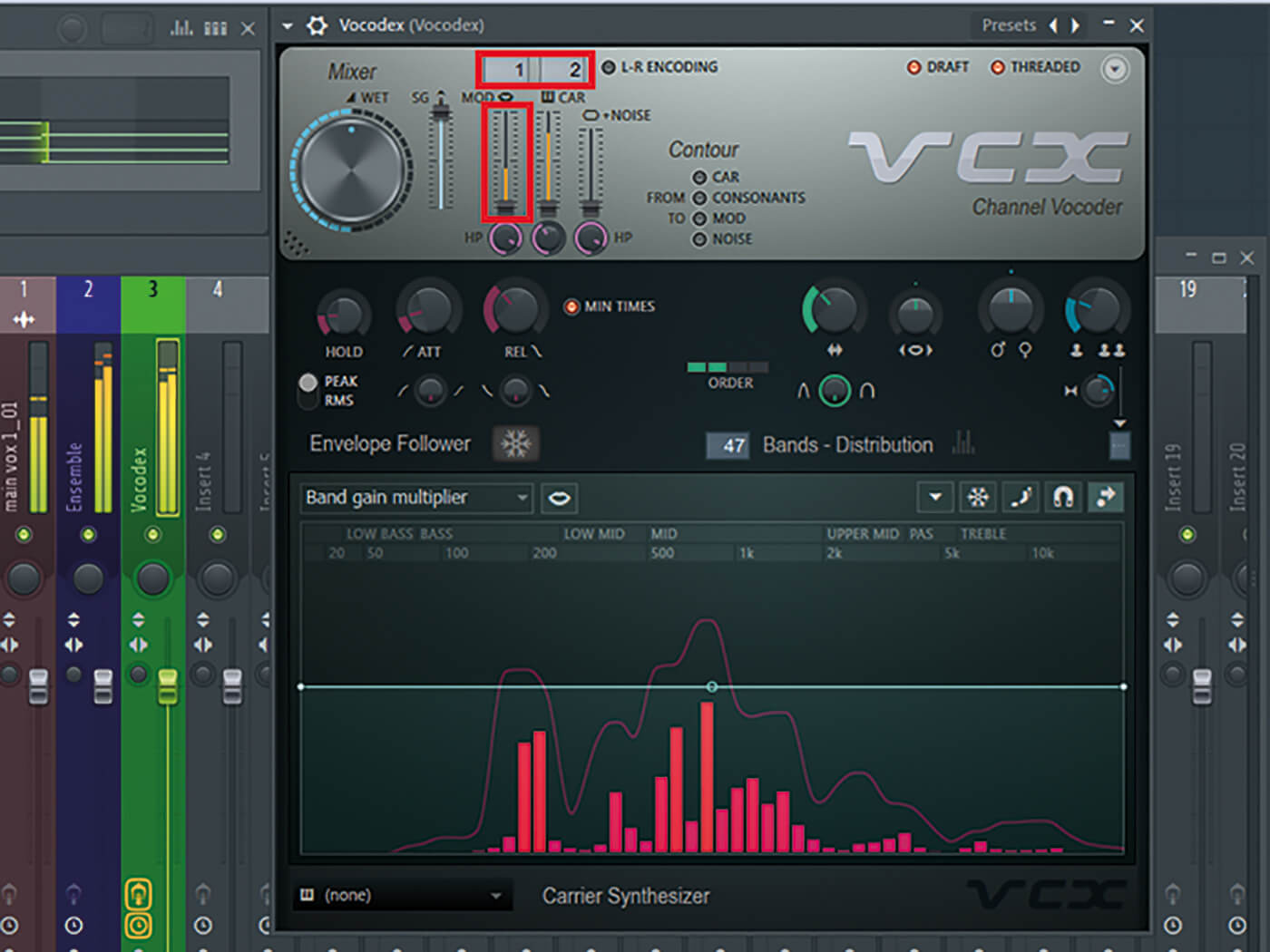 9. Next you will need to open Vocodex and set the MOD & Carrier to the corresponding mixer tracks. You can click and drag to set. 1 for MOD and 2 for Carrier. Turn down the modulator input as necessary. 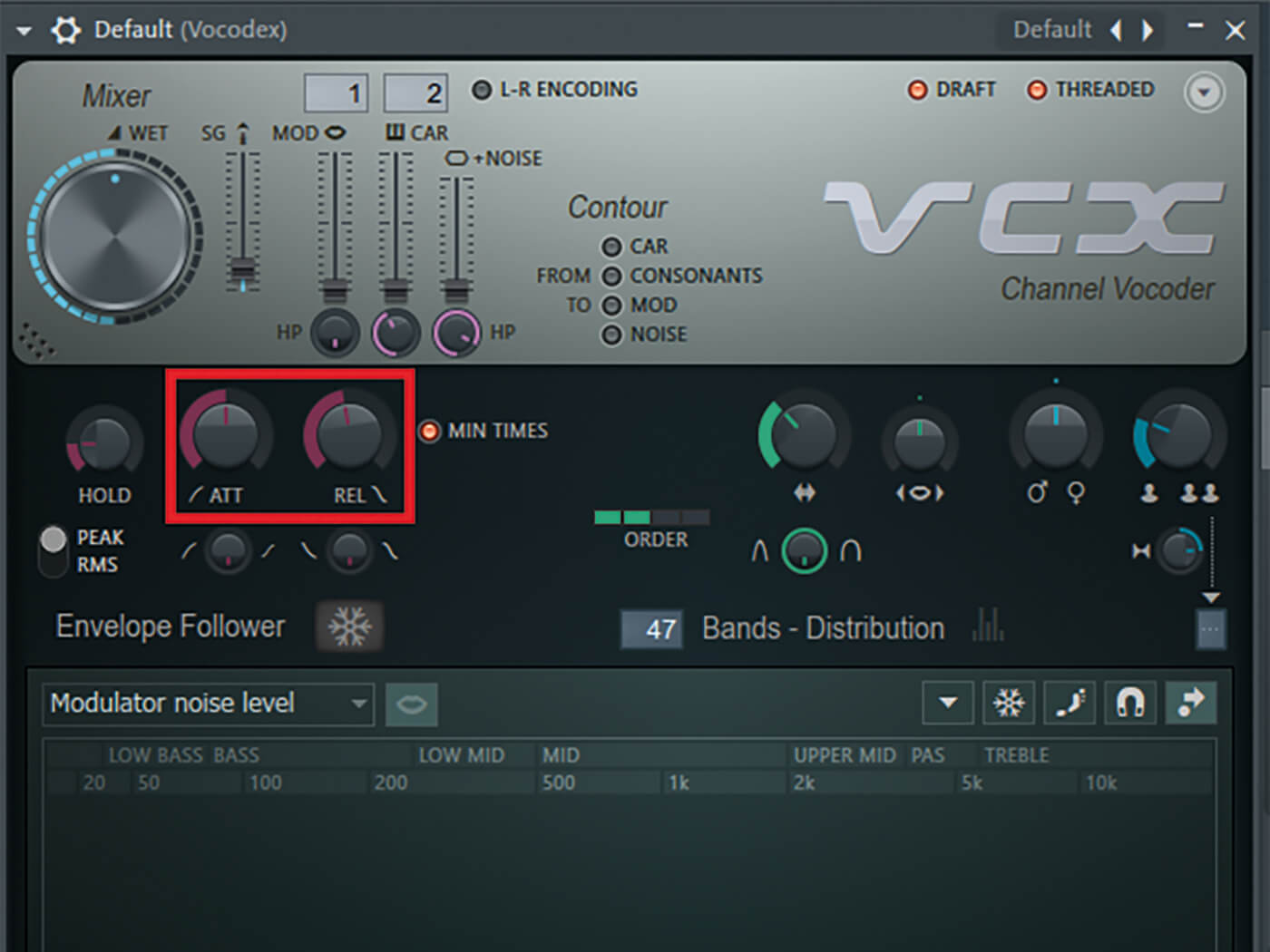 10. We can improve the sound in Vocodex. The setting will depend on the vocal but experiment with attack and release first. Medium Attack and Release work well here. 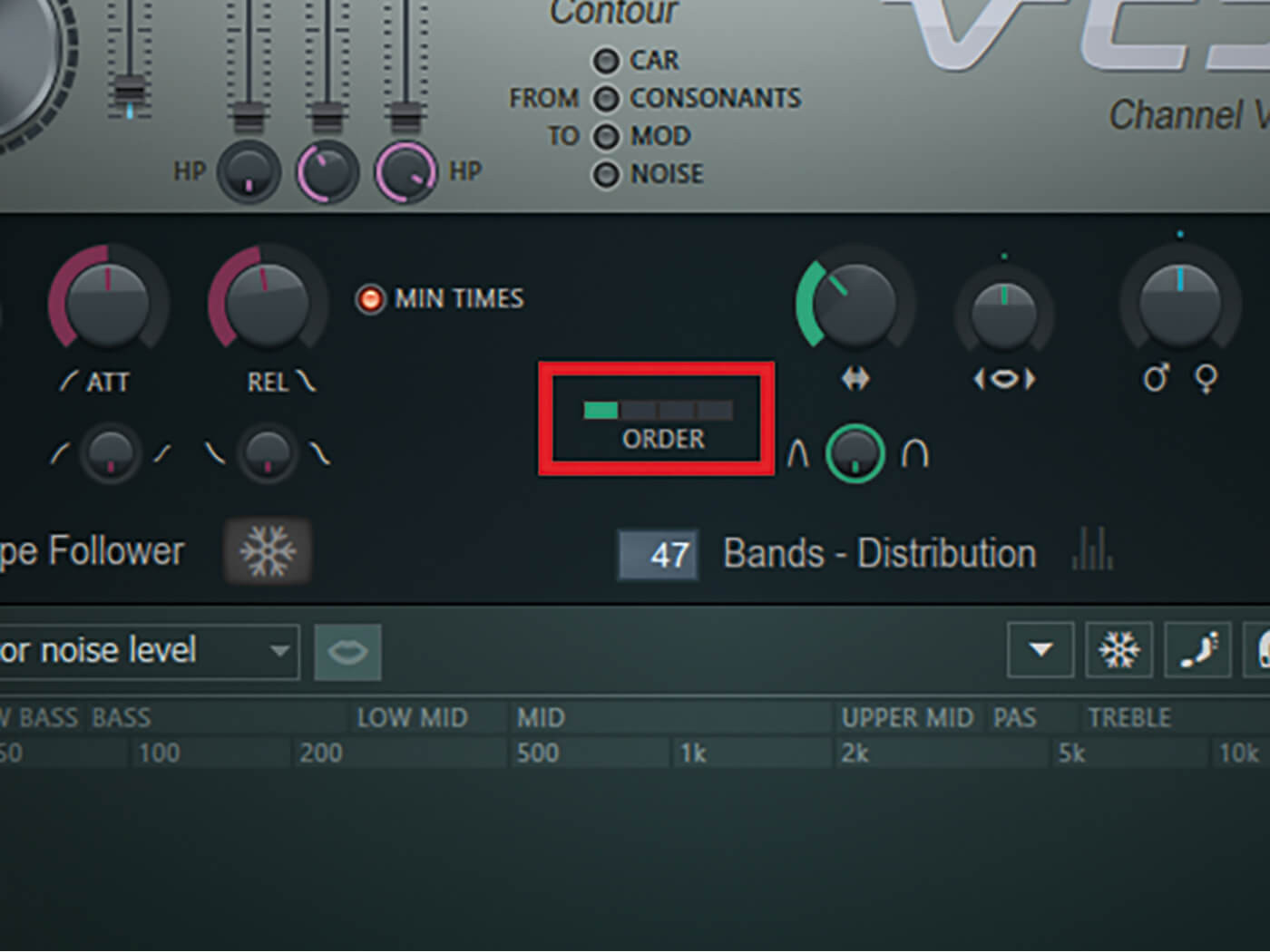 11. Move over to order, selecting one order will give you more of a synthesized-sounding vocal. Selecting four gives a more realistic vocal sound. Decide what works best for you. 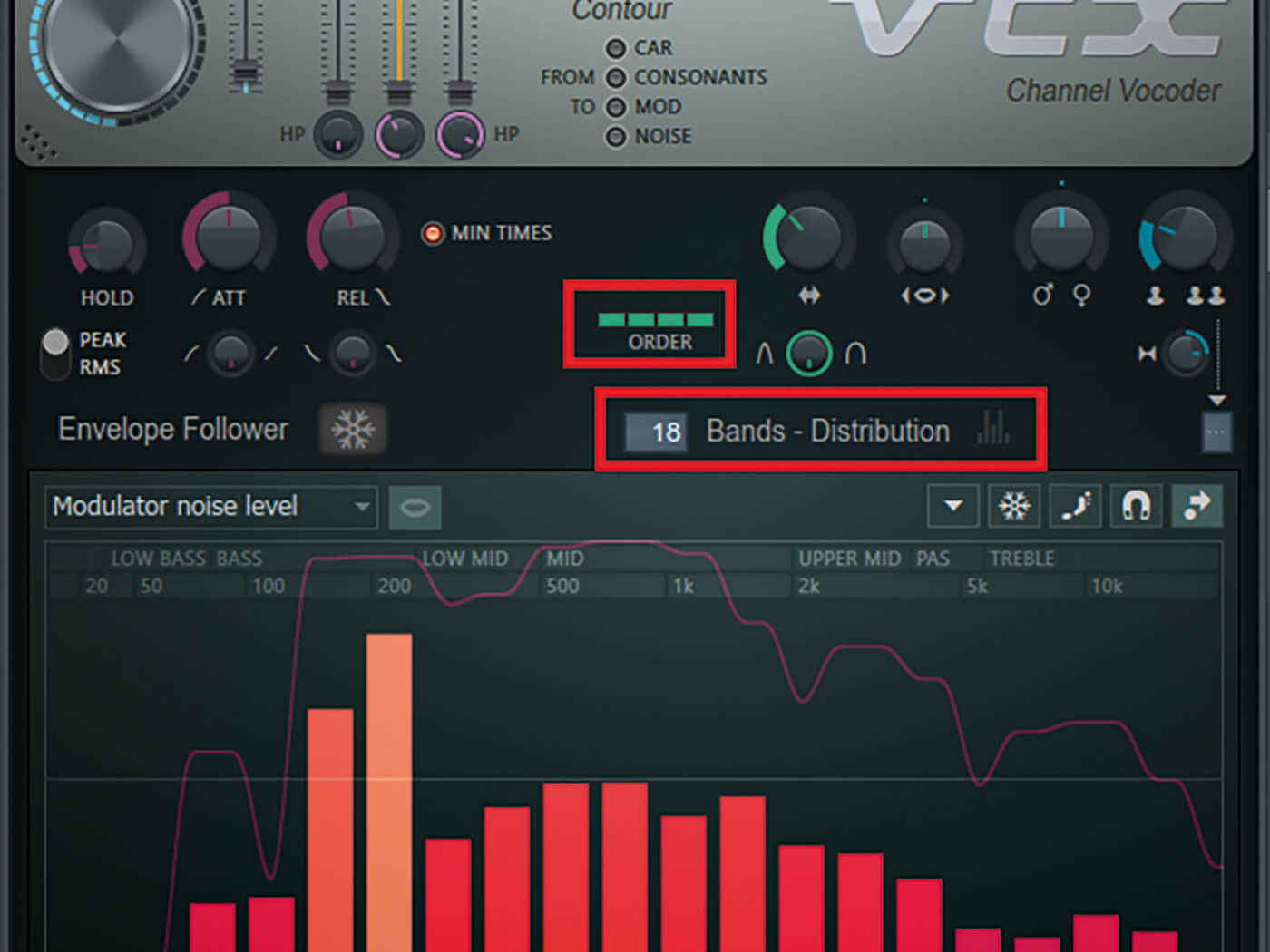 12. Changing the Bands by clicking and dragging can drastically change the sound. Order works together with this experiment to see what works best.

NOT WHAT YOU SAY Lyrics may become less important at this time, so start by grabbing your microphone or even your phone to go straight ahead and record some spoken words, then process them using a vocoder to create your next hit single. It’s the sound of your voice that has the power here. 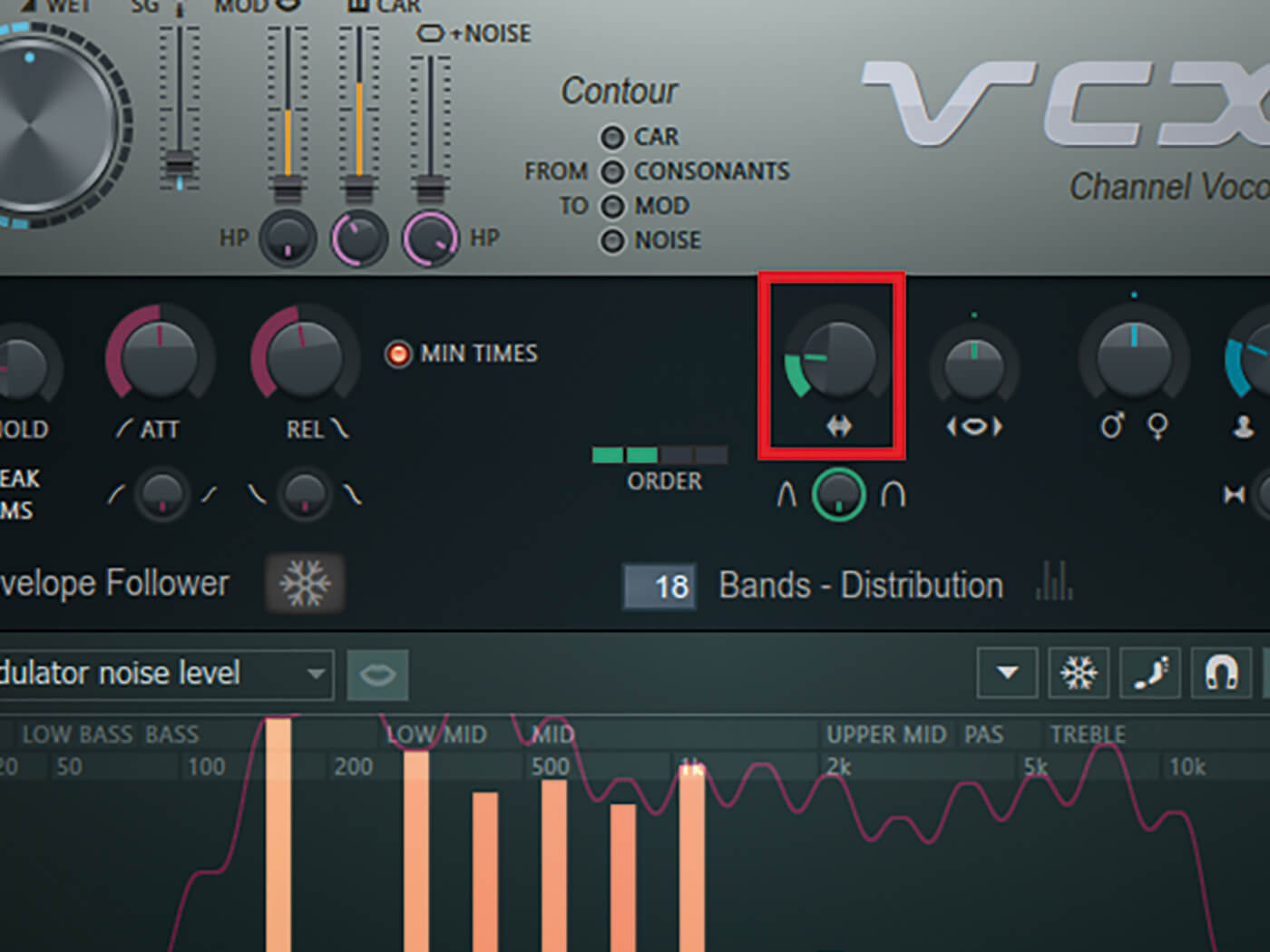 13. Try experimenting with the bandwidth and see what works best for your vocal. Low bandwidth gives a more resonant tone whereas high values merge the bands. 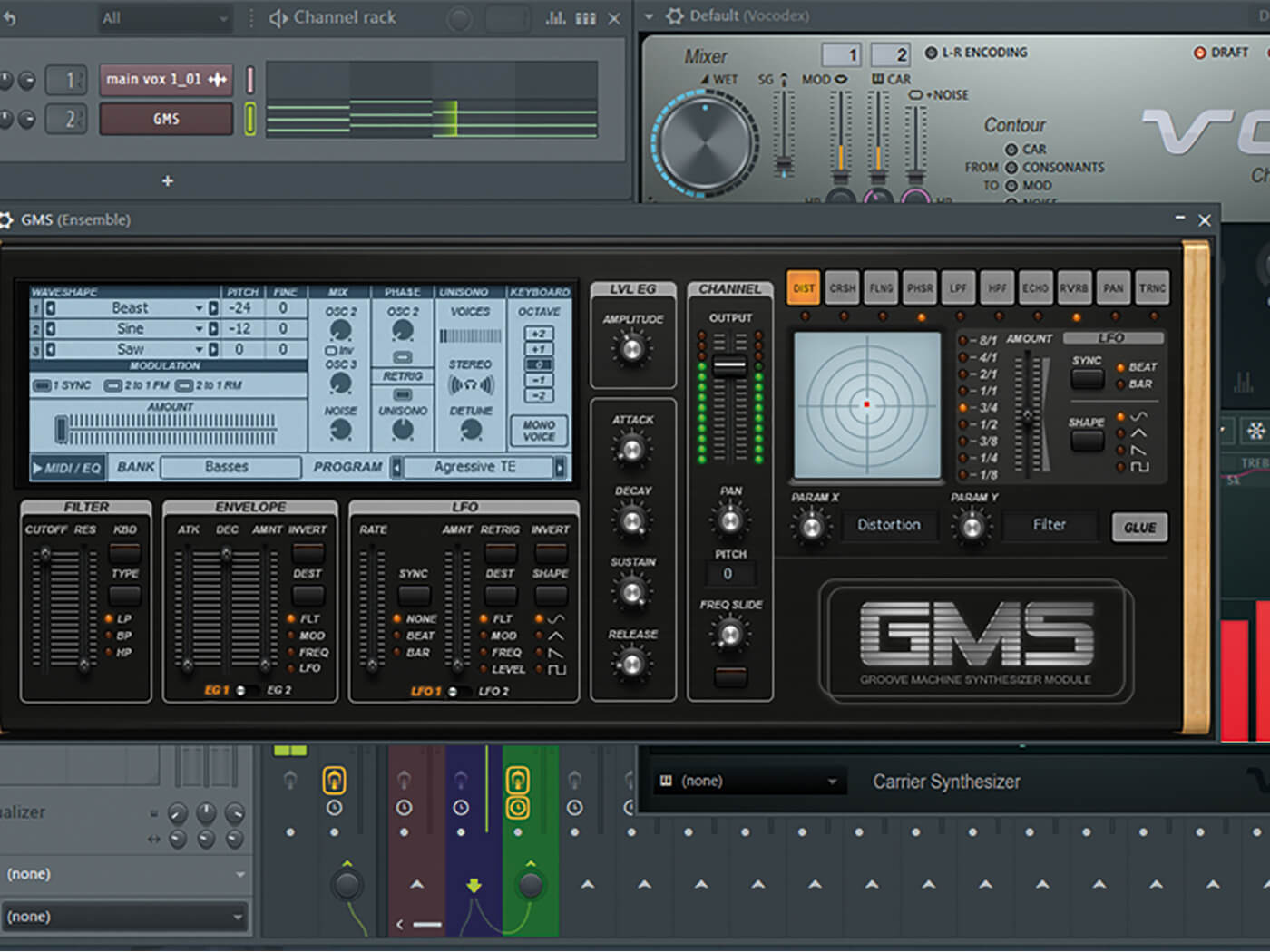 14. Experiment with different carriers replacing the existing Sytrus or changing the preset, this will drastically change the effect on Vocodex. Default GMS works well. 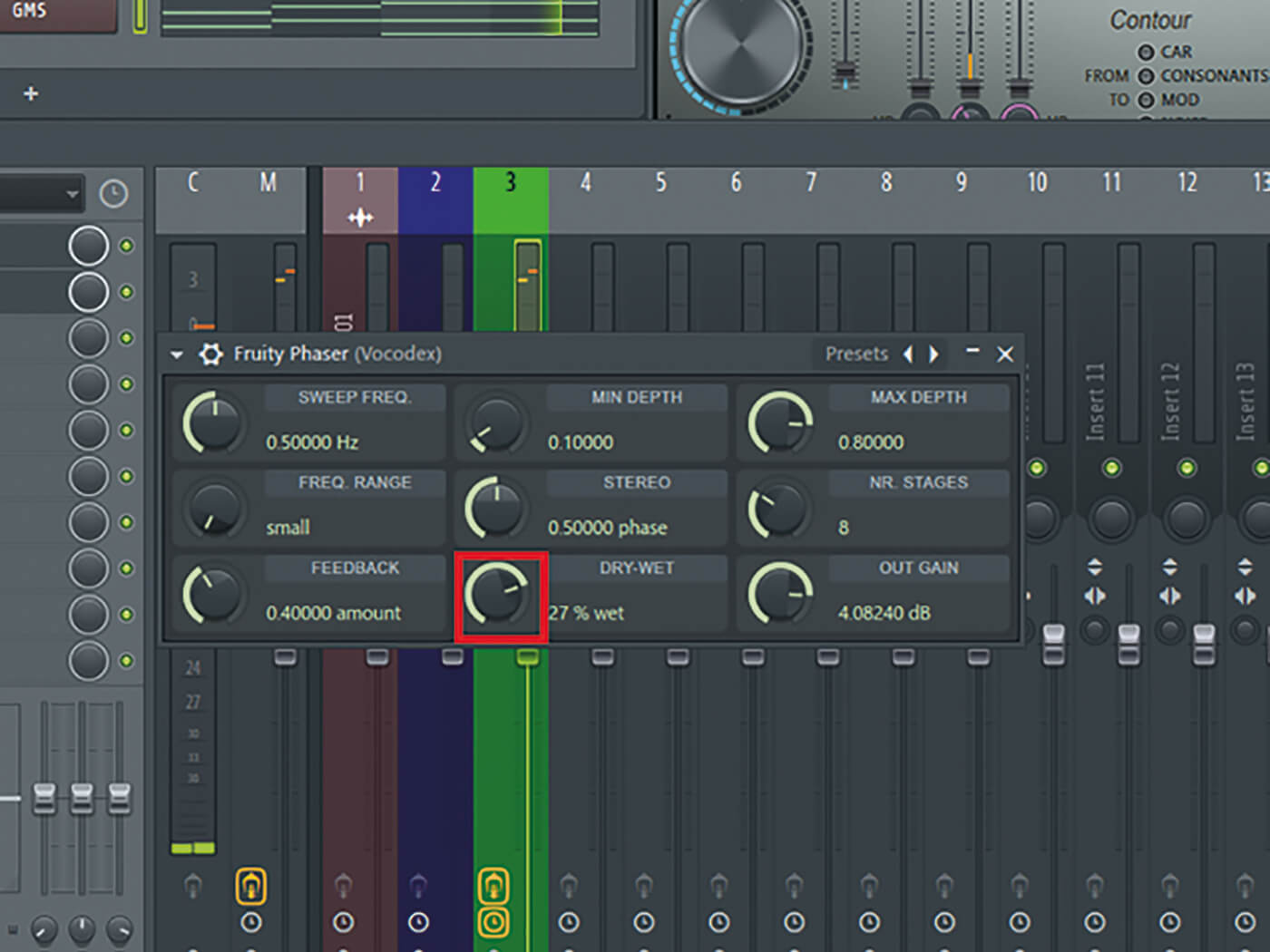 15. Add a Fruity Phaser on the Vocodex mixer channel and reduce the Dry/Wet to around 30% to add some subtle modulation. 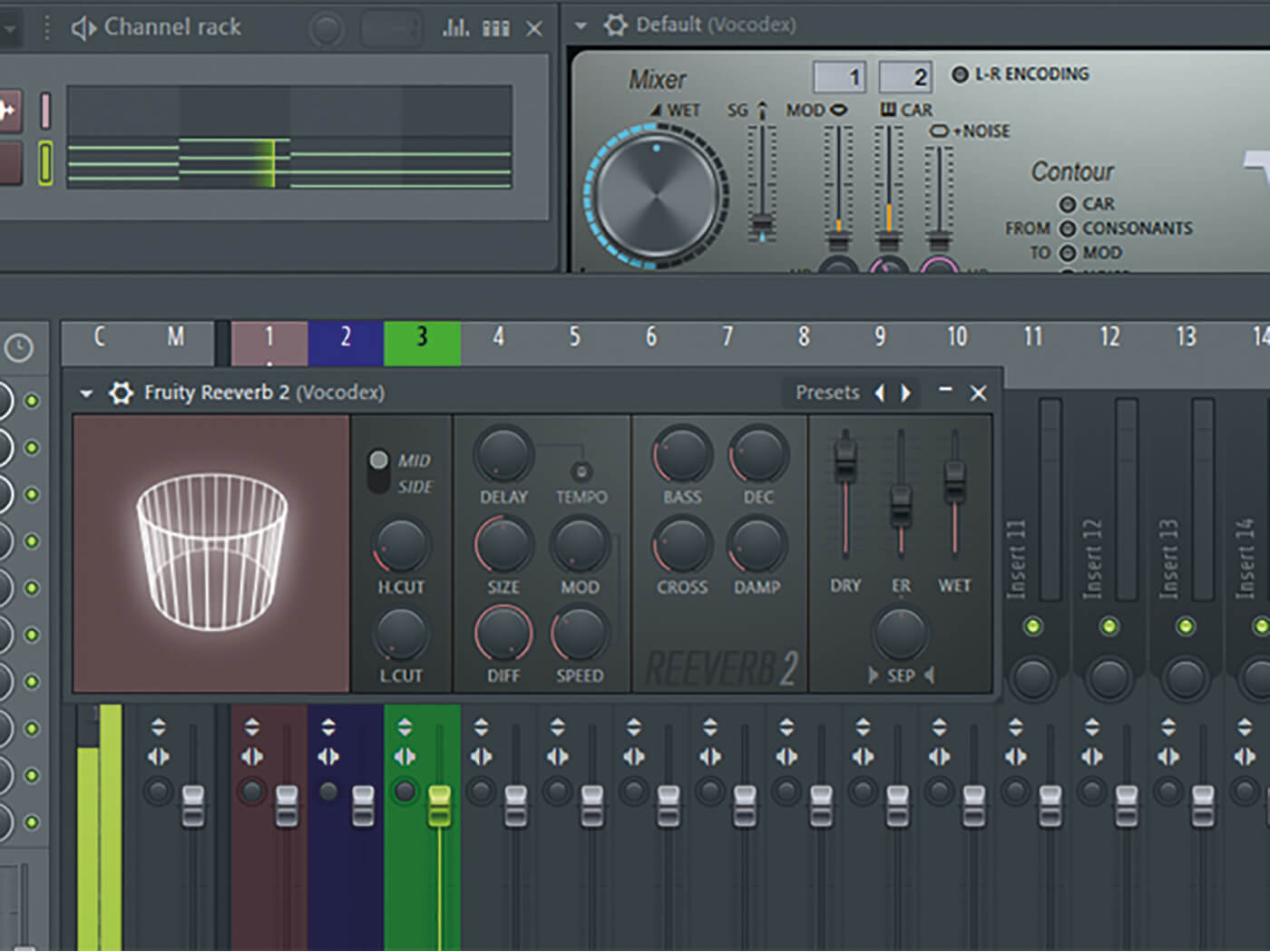 16. Add Fruity Reverb 2 and increase the wet and decay to give further dynamics. Whether you opt for this reverb will, of course, vary depending on your vocal. 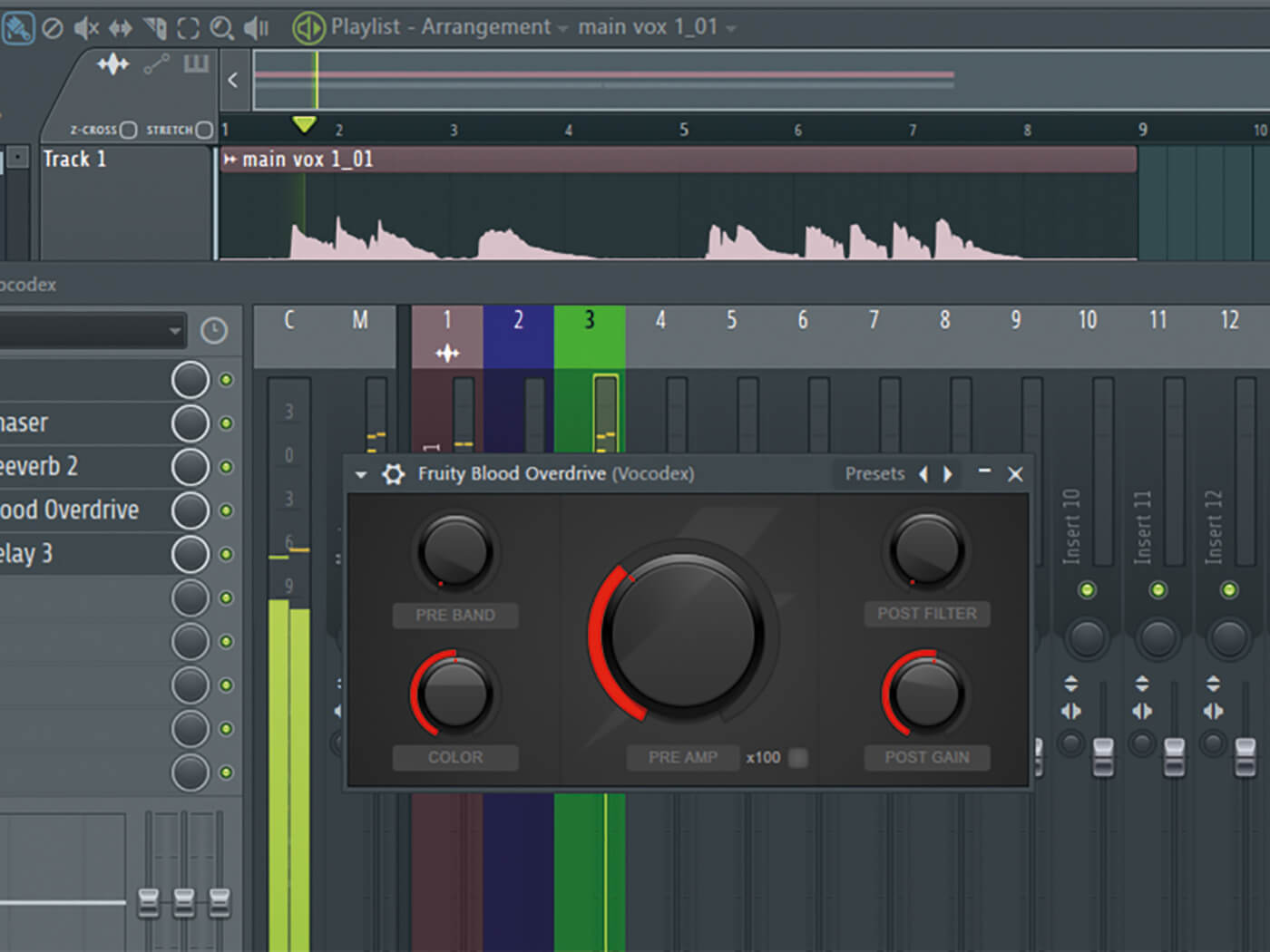 17. Experiment with distortion and delay. Don’t be too gung-ho here. Go easy on the effects for subtle improvements and additional timbre. 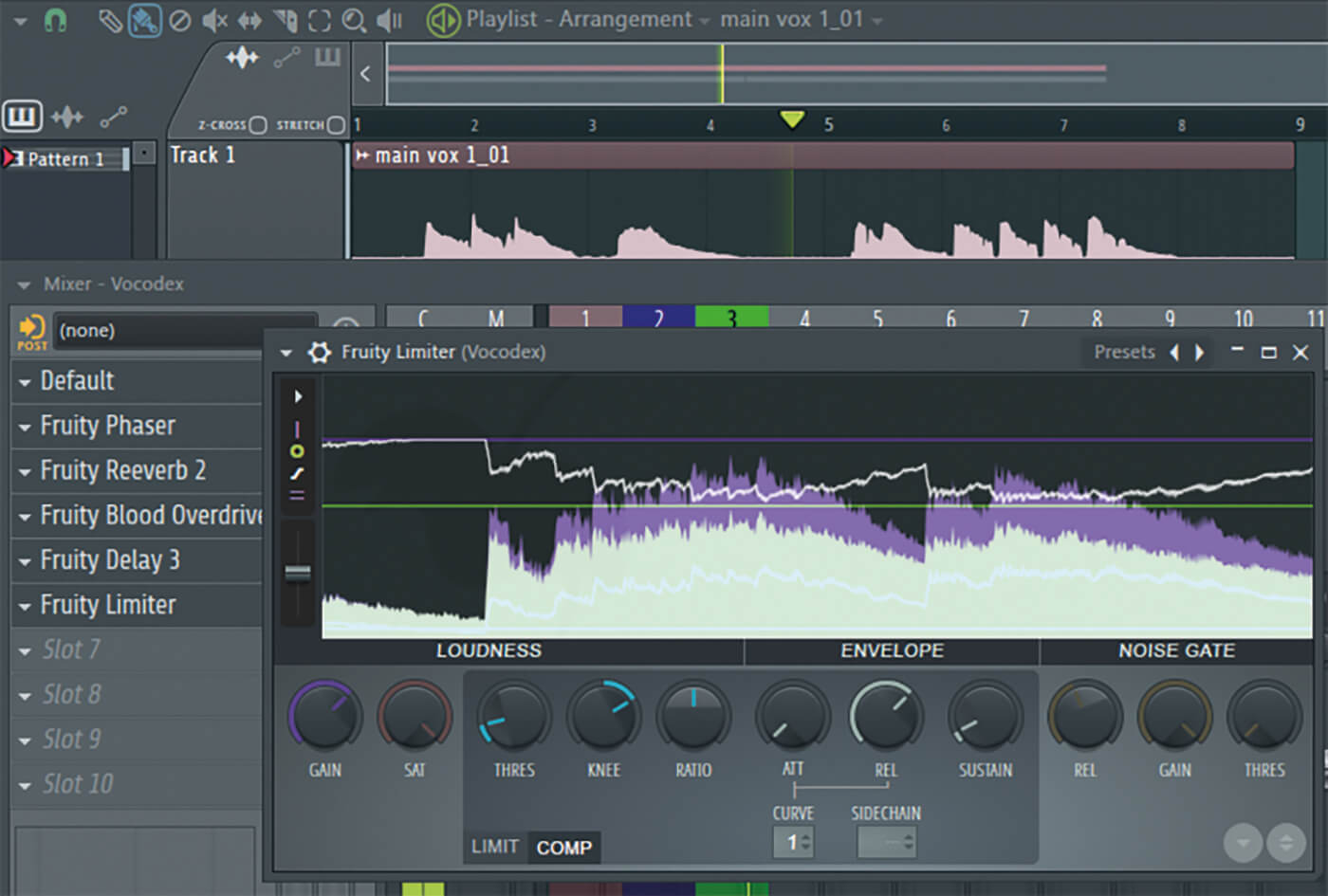 18. Finally add a Fruity Limiter to keep your output in control and glue the sound together. Switch to comp mode, set the threshold to -28, knee to 40% and gain to +3db.