Twinkly ambient lo-fi piano is a regular ingredient in chillwave music and the soundtracks to relaxation-therapy videos. FL Studio allows users to create these therapeutic instruments with ease. Take a deep breath and let us show you how. 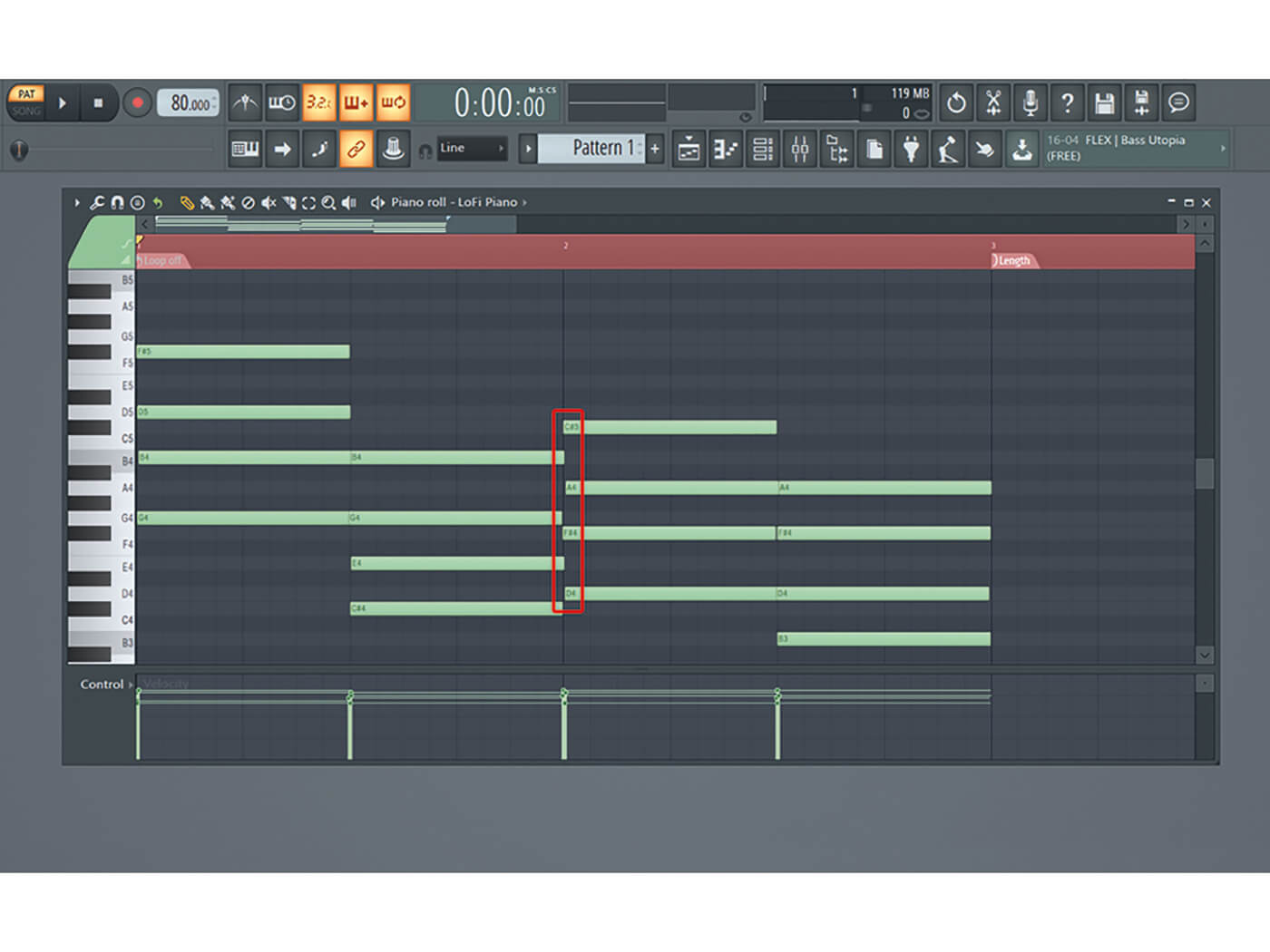 Take a cursory glance at YouTube and you’re likely to see a slew of relaxation and concentration-aiding videos with names such as Beats to Study To and Relaxing Music 24/7. Most of the music that makes up this enormously popular trend of videos, streams and mixes is based on deeply chilled-out (and oddly out-of-tune) piano. This sound has also become one of the most recognisable features of the equally popular contemporary lo-fi hip-hop movement.

Emotive-sounding lo-fi pianos playing mellifluous melodies form the heart of these composition styles. In this tutorial, we’ll show you how you can achieve this sound using little but FL Studio’s native piano plug-in FL Keys, a few FL effects you may not know about, and a bit of nous.

If you’re new to lo-fi hip-hop or just want to dip your toes in before diving deeper and producing your own beats and melodies, we recommend you check out some of the regular lo-fi streams on YouTube or one of the many ready-made playlists on Spotify. Searching for general terms such as ‘study music’, ‘relaxing lo-fi hip-hop’ and ‘chill-out sounds’ will likely yield a plethora of appropriate piano sounds that will help you tune your ear to the right frequencies for this tutorial. Alternatively, you could go directly to the genre’s established producers, which include HM Surf, bsd.u, and Kupla. You’ve probably heard this genre of music before, perhaps without being aware of it.

You’ll notice that besides the numerous sonic similarities between these songs and mixes, which include vinyl-style crackle, muffled drums and detuned instruments, each producer still has their own unique approach. Many incorporate vocal samples from film and TV, others use natural ambiences, and some even bring in elements of acid. We encourage you to use this tutorial as a foundation that you can later build upon with your own stylistic garnishes.

The initial focus here should be to purposefully lower the quality of your sound. The trick here, however, is to ensure that your piano sounds treated but that your beats retain their heft, and don’t sound as if they’ve been through a bit-crusher seven times. This combination of low-quality (low fidelity, hence lo-fi) sound and substantial beats might seem like a contradiction, and in many ways it is, but it’s what gives the genre its signature sound.

This commingling of disparate sounds presents challenges to producers too. Luckily, FL Studio provides users with FL Keys, whose fantastic features are well equipped to create lo-fi sounds. Not only this but FL Studio has multiple native effects plug-ins that add even more sound-shaping options to help you get what you want. Careful use of FL’s functions should put you in total control of your sound quality. You want lo-fi, not inaudible.

Most of the steps in this tutorial, especially those that regard the creation of effects and melodies, can be applied to many different instruments to make them sound more lo-fi too. Don’t limit yourself to a piano or Rhodes for your lo-fi productions. Fan out and experiment. You could save an effects chain built for lo-fi piano and throw it on another mixer track or use it in future productions. Just right-click the mixer track and hit File > Save mixer track state as.

Here, we’re going to make a melody from some basic chords. That doesn’t necessarily mean that your melody must sound simple, but think of the sound design as a more important aspect of lo-fi production than the quality of your compositional skills. You can always add or remove notes to create more complex chords later on too.

Given that many of the samples found in lo-fi hip-hop and the like are drawn from old jazz and blues records, you could even reach for some old vinyl recordings of your own and recreate the chords and progressions therein. For example, the dominant seventh chord often sounds jazzy and the II-V-I progression is found in many jazz records. You can get a lot of mileage from the basics, as you’ll notice over the next 18 steps. 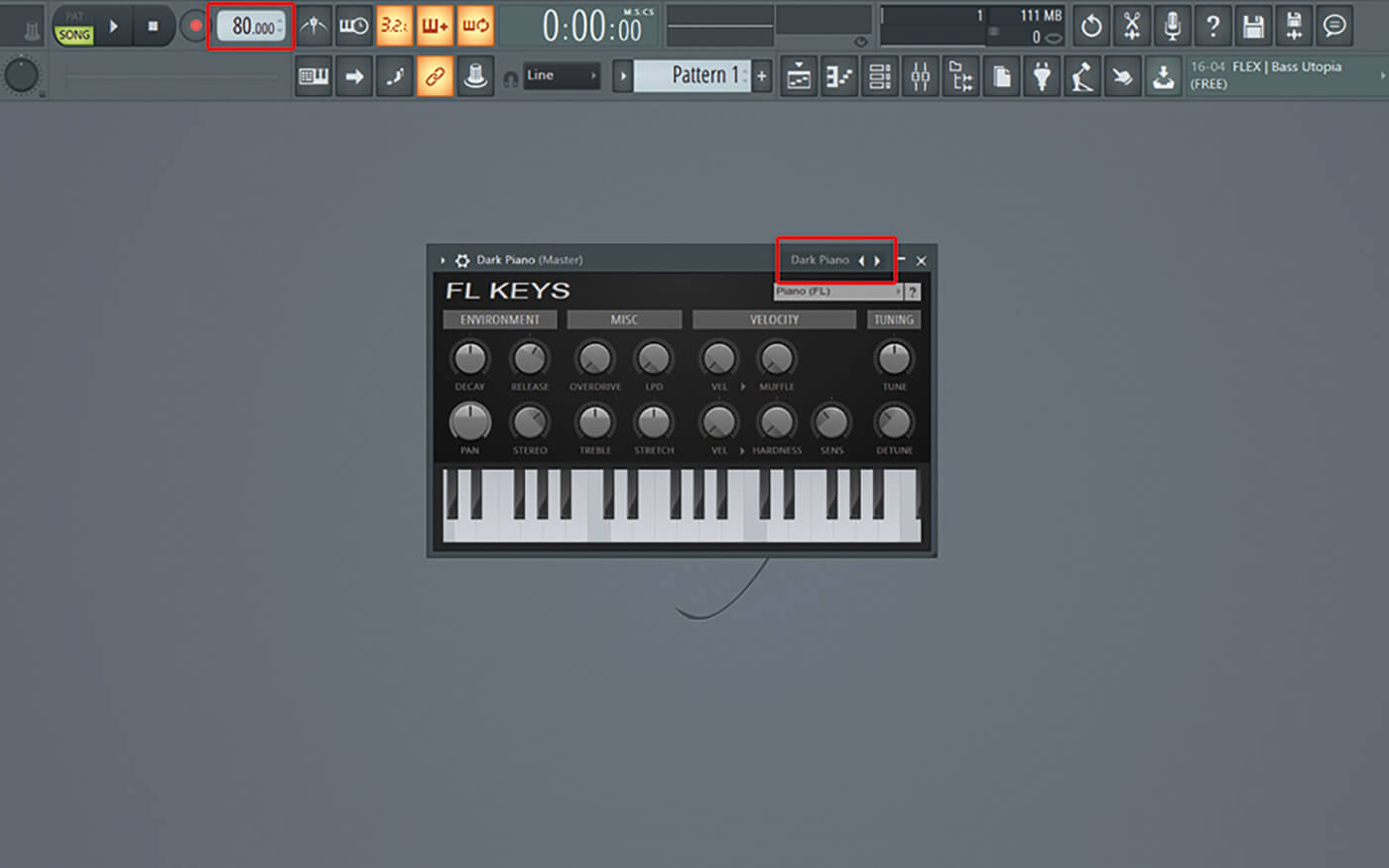 1. Set the BPM to 80 and open FL Keys from the plug-in menu. Select the Dark Piano preset. When picking piano presets or creating your own, look for something with a soft attack and long release or slow decay. 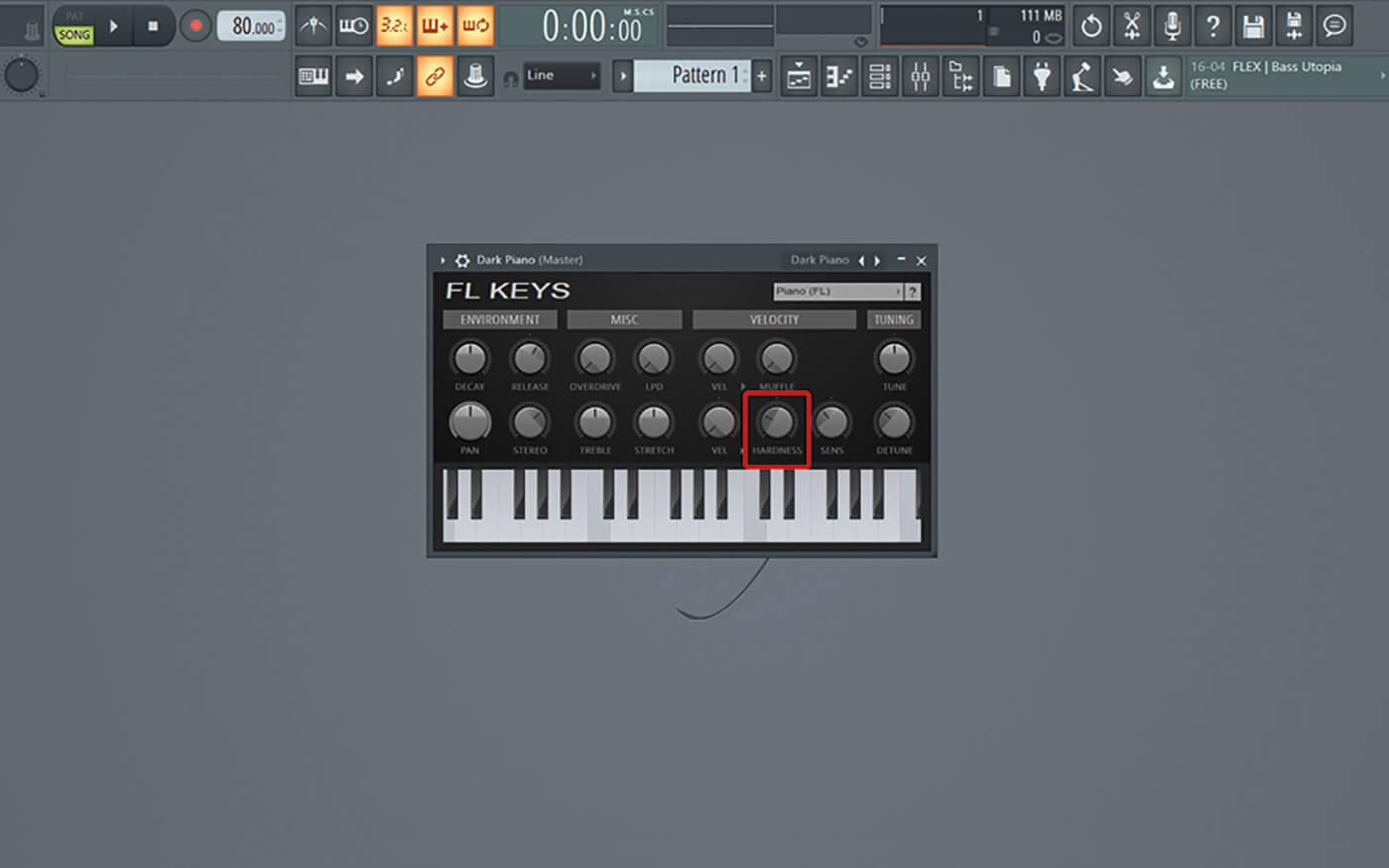 2. To give the sound more attack, adjust the hardness setting. Just increase it slightly for now. You can adjust it more later when your sound and melody is finished. 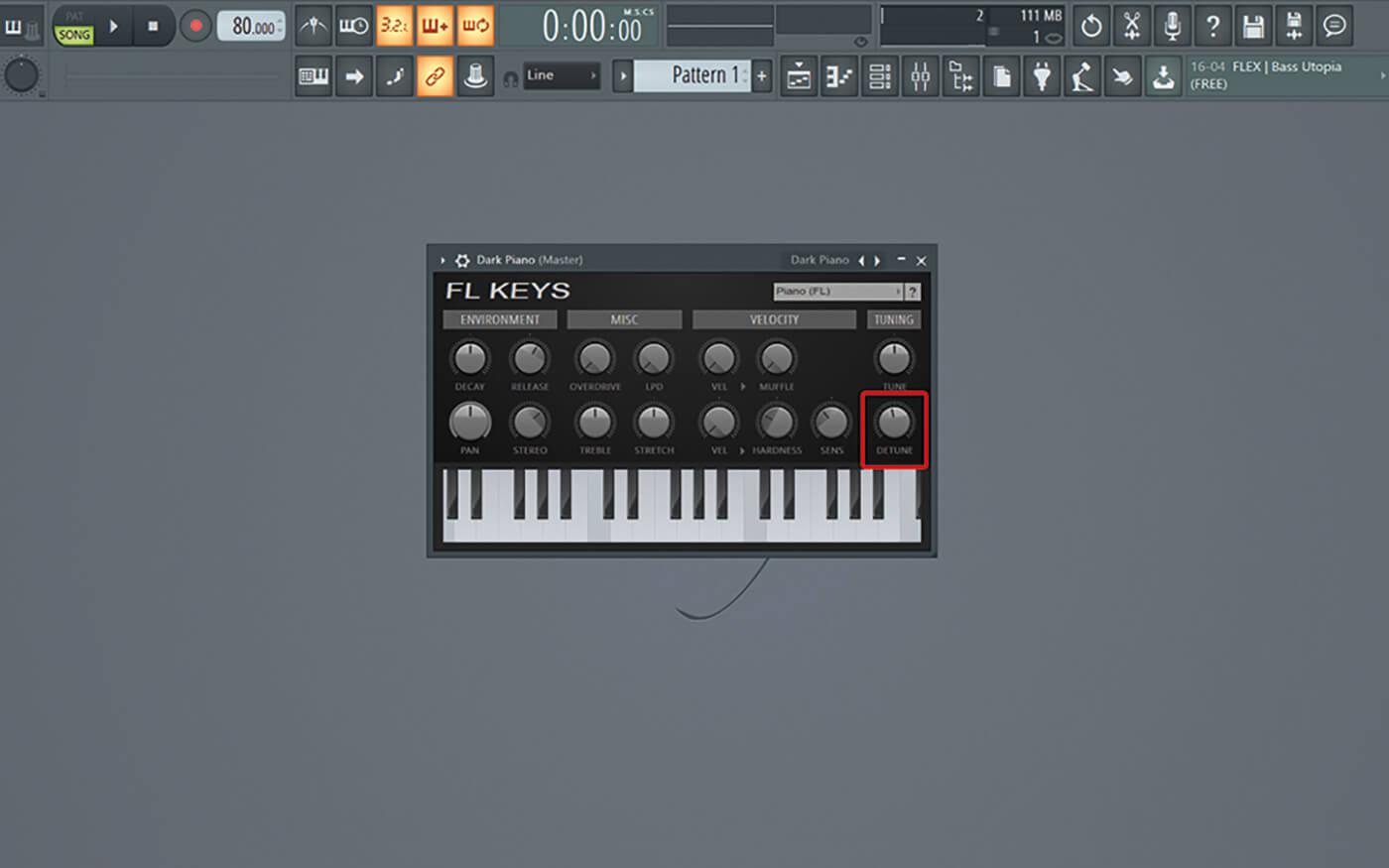 3. One of the most recognisable facets of lo-fi hip-hop is the out-of-pitch sounds. To achieve this effect, increase the detune setting. Don’t overdo it, as you’ll be doing it again in step 15. 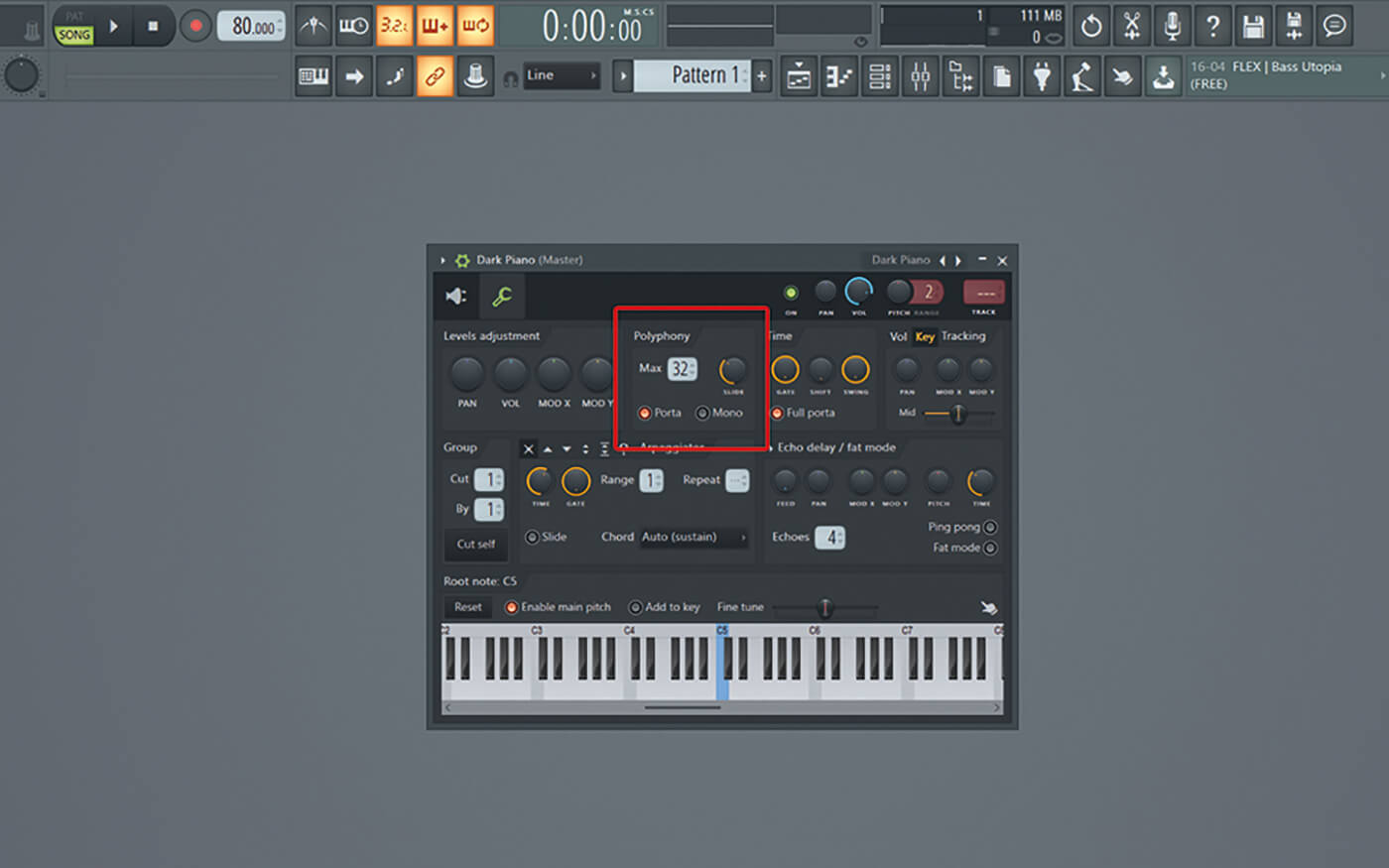 4. Set FL Keys to Porta mode via the plug-in’s settings. This will make your notes glide into each other. Apply a small amount of glide, about 0.04, to begin with, as its intensity will be determined by your melody. 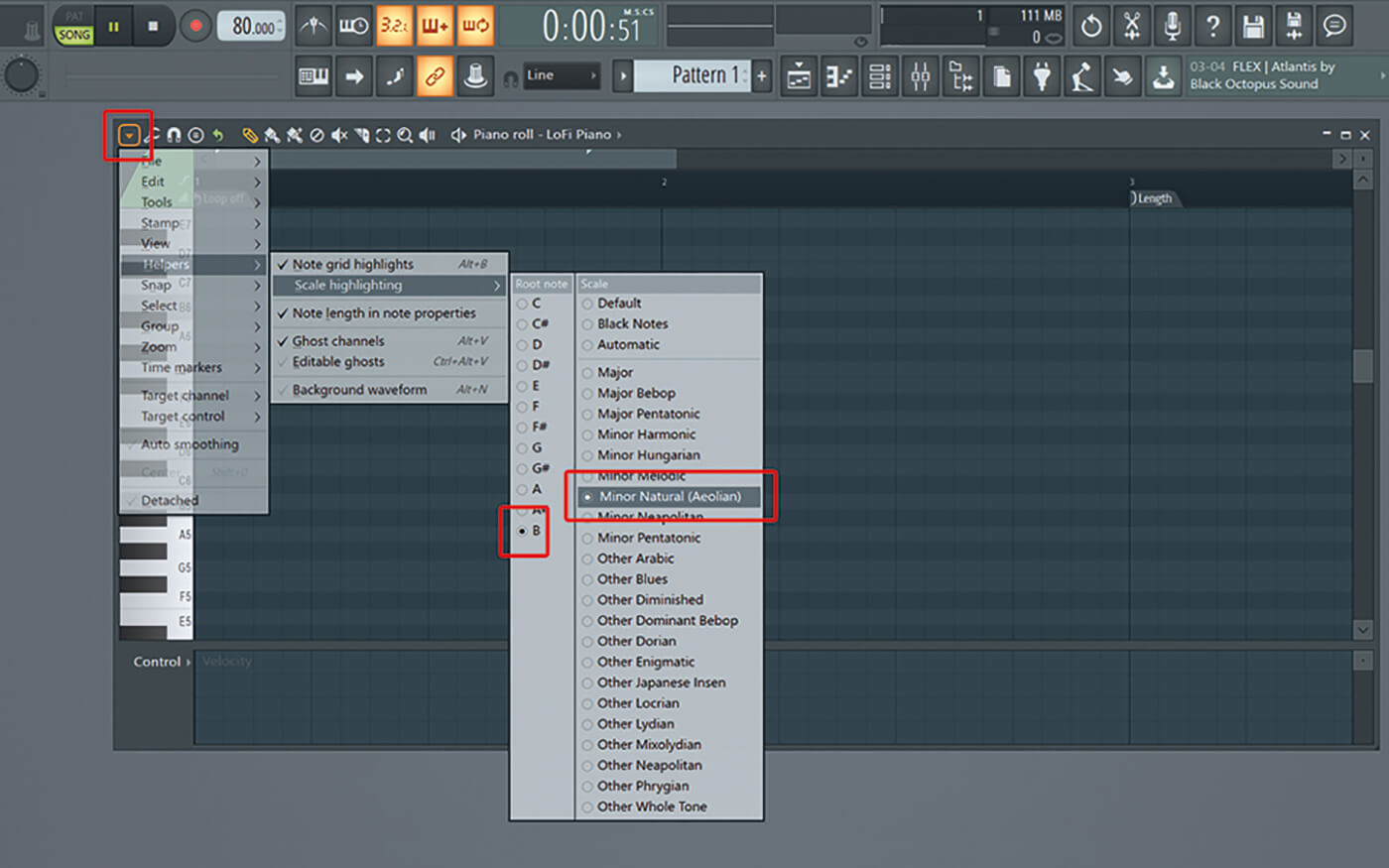 5. Set your piano to a scale. Hit the arrow in the top left of the piano roll and select Helpers > Scale highlighting. Here, you can choose your scale and root note. Minor scales suit our lo-fi aesthetic. Here, we picked the Minor Natural scale with a root note of B. 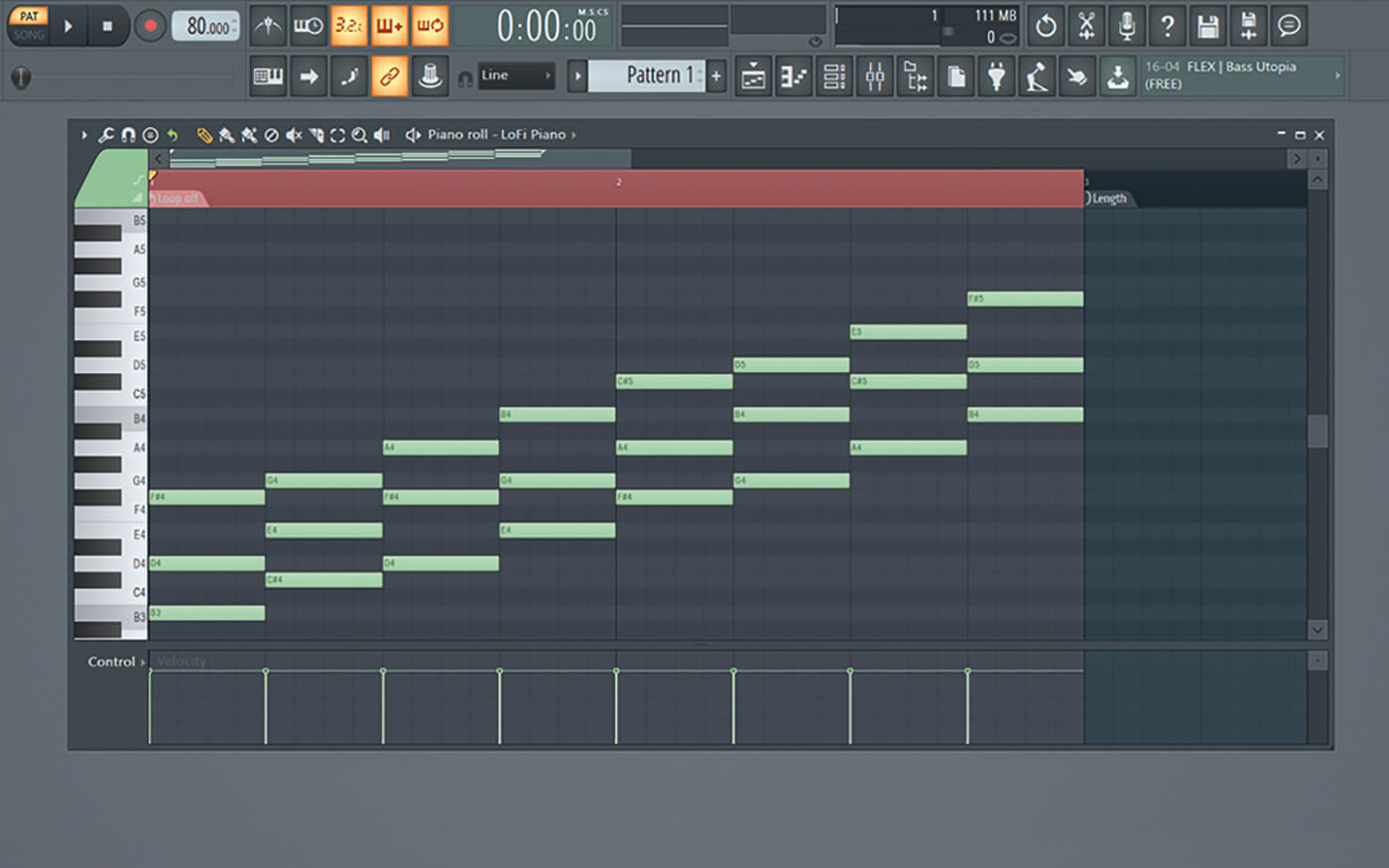 6.  With all the notes of this scale now highlighted light grey, you can create triads on each note. Triads are the first, third and fifth note of a scale played together. Here, the first is B, D, F#, the second is C#, E, G, and the third D, F#, A, and so on. Here, we start at B3.

RANDOM ACTS To humanise a chord progression quickly, use FL Studio’s Randomizer tool. Simply select the notes you want to affect and hit Alt+R. In this pop-up window, you can randomise parameters such as volume, panning, length and so on. A human touch often makes for better results. 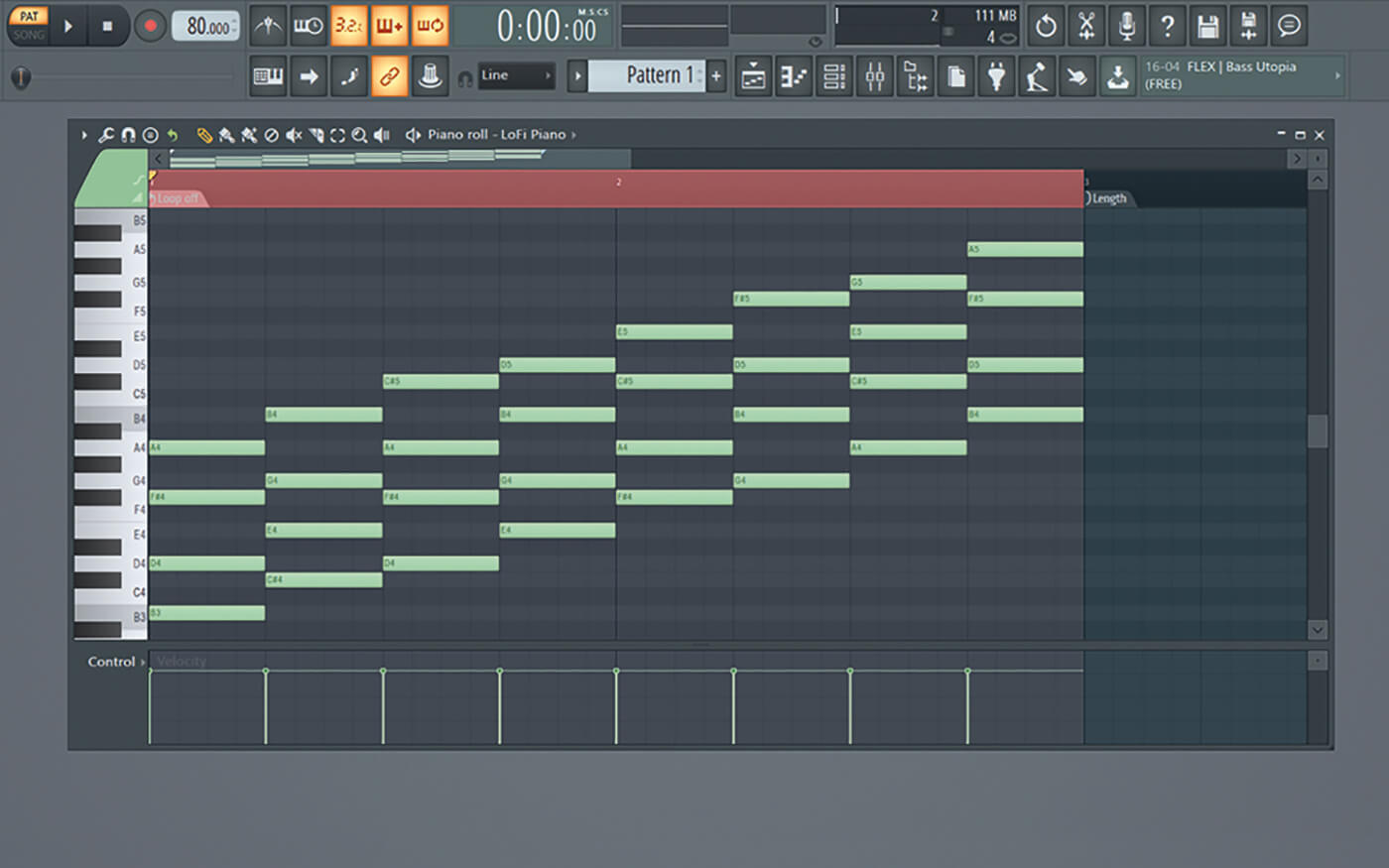 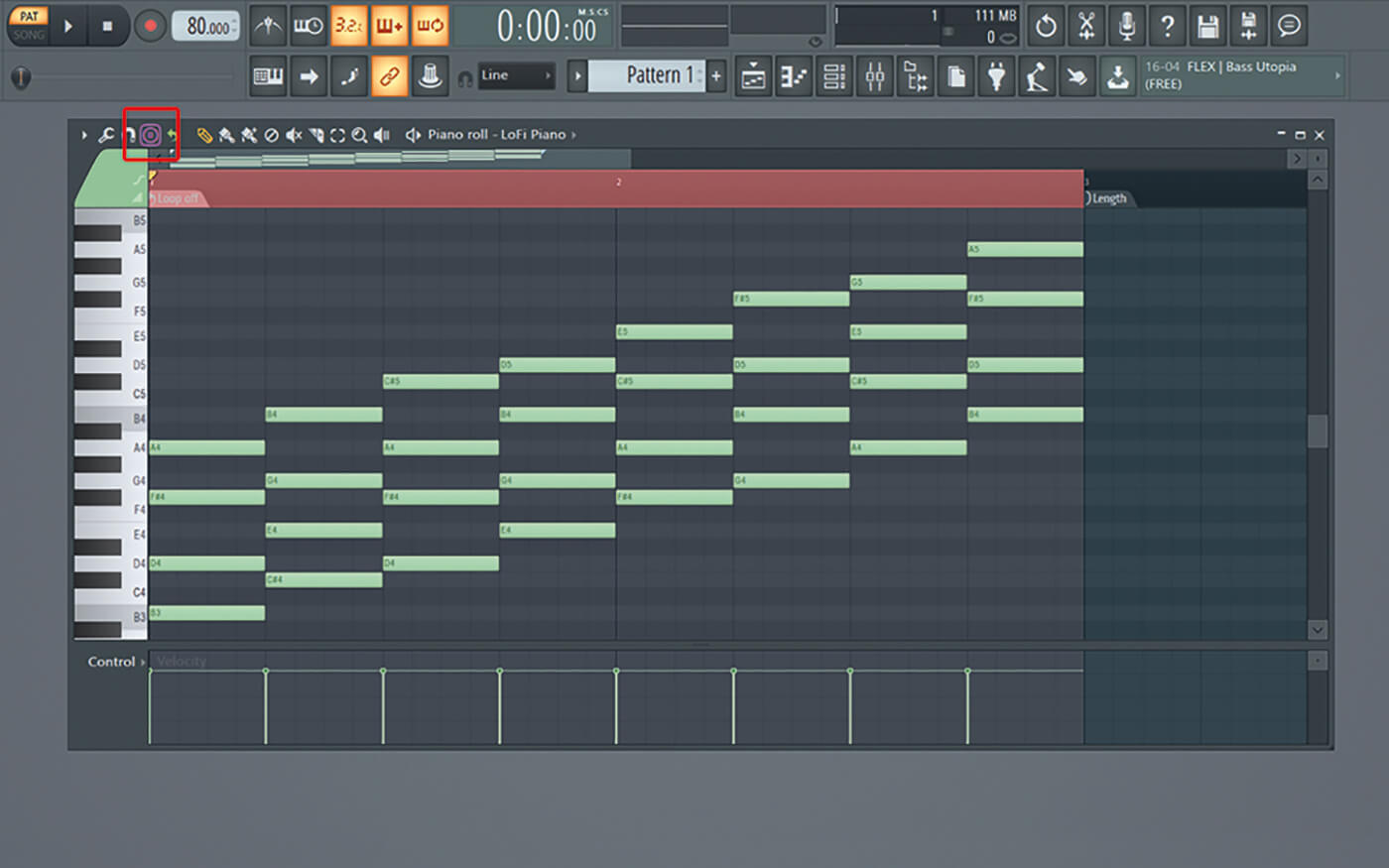 8. You can of course do much more with chords than this. Hit FL Studio’s Stamp button in the toolbar and select any kind of chord to draw it in. 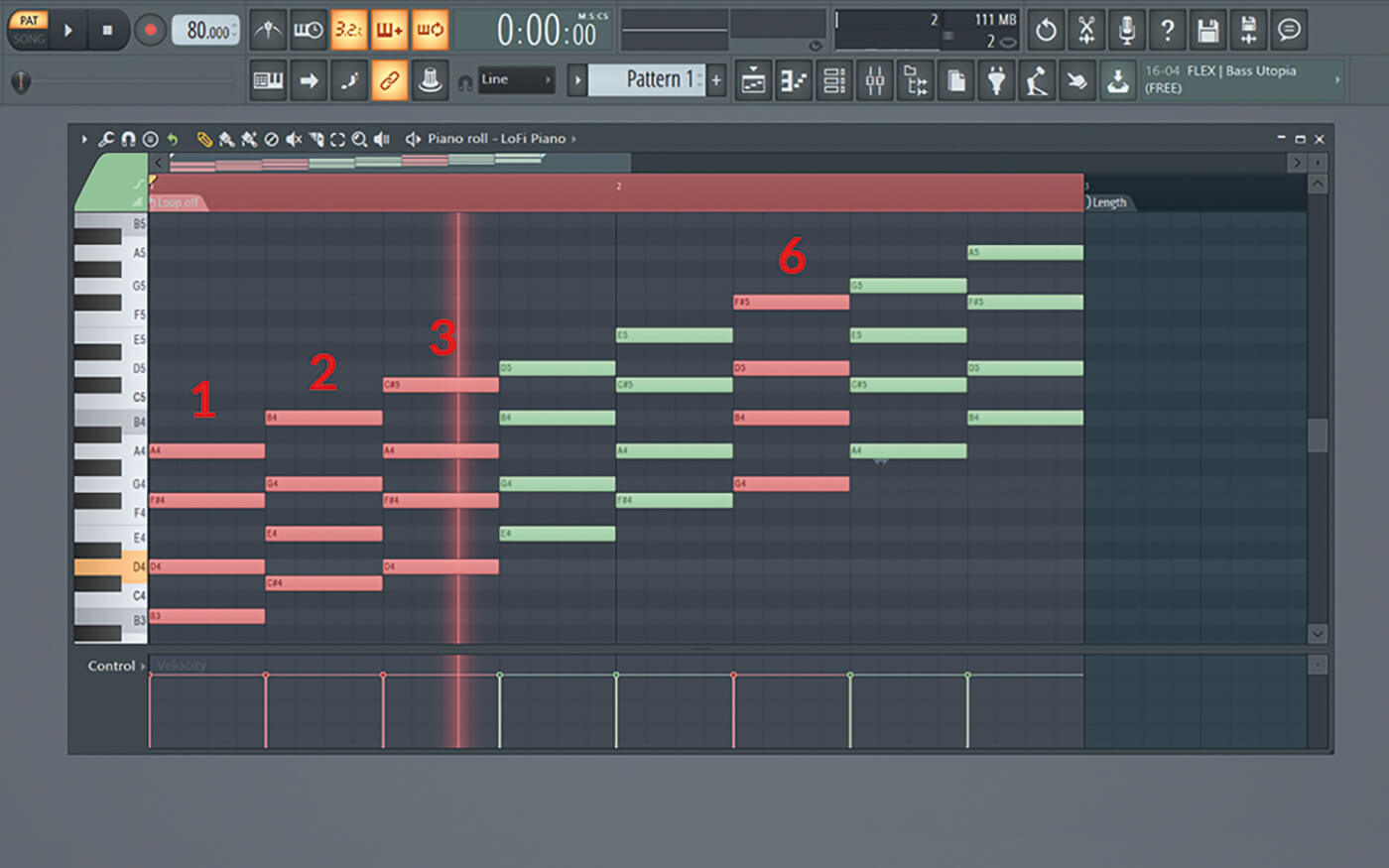 9. Now that we have multiple chords to choose from, listen to them separately by hitting Y and clicking on a chord or hold Alt and right-clicking. Choose whichever you want. Here, we opted for the VI-II-III-I progression. 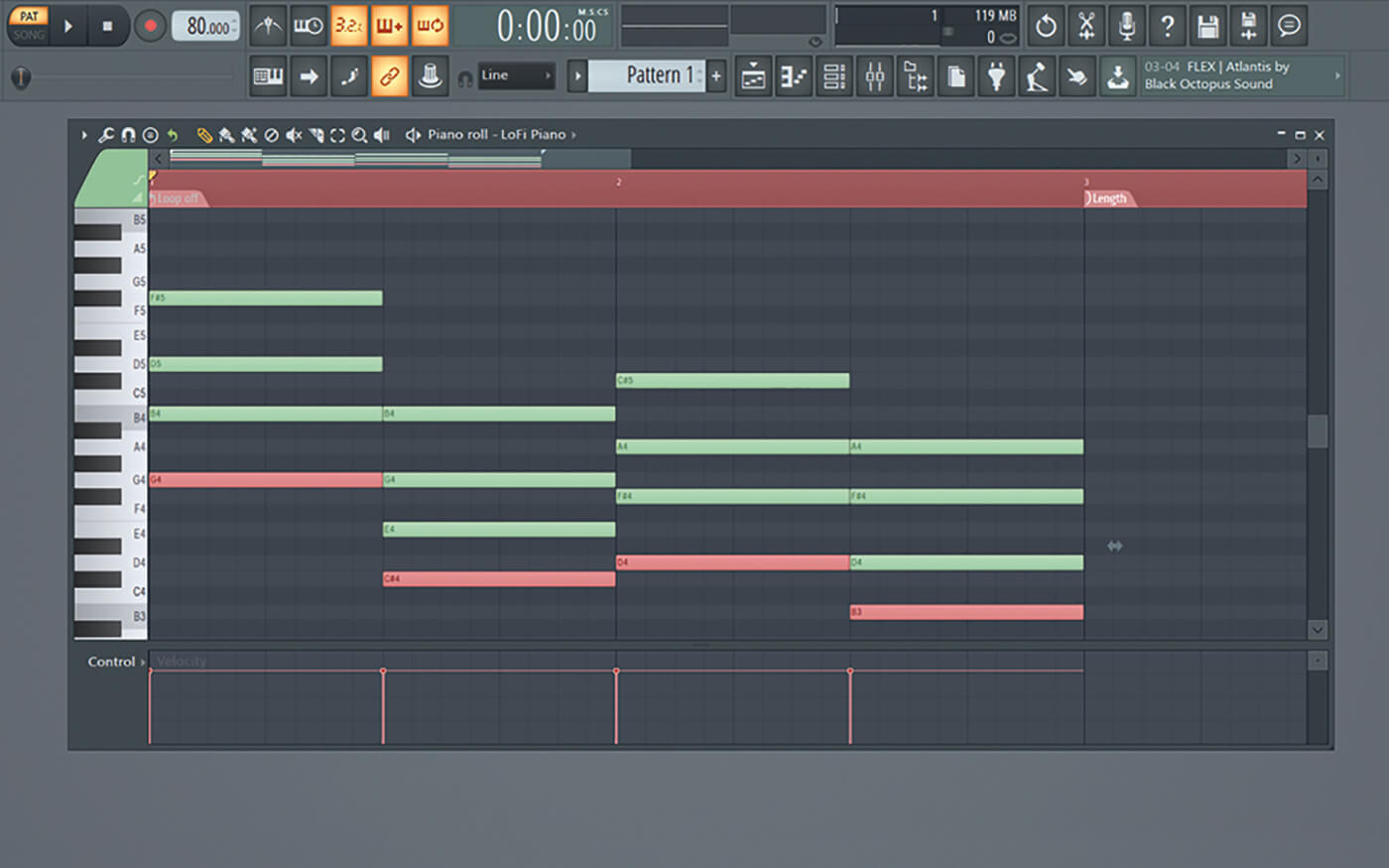 10. To add more body to your sound, lower the bottom notes by one octave. Select them by holding Ctrl+Shift and left-clicking, then hit Ctrl+Down arrow. Alternatively, use them as your bass progression in another plug-in. 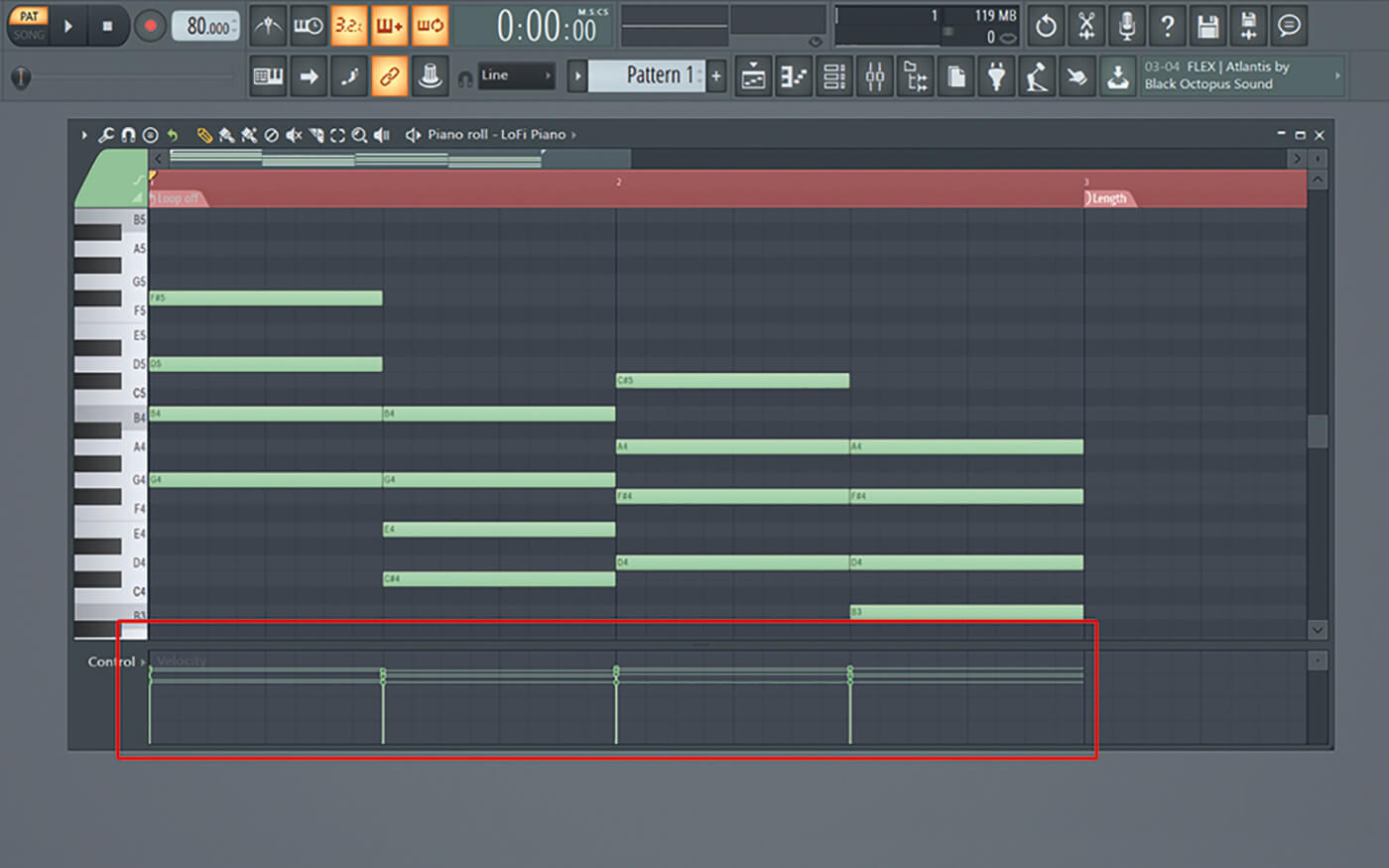 11. Now that you have your basic melody/progression in place, give it a human touch by adjusting the individual volumes. Hover over notes or select multiple and hold Alt while scrolling up or down to increase or decrease their volume. 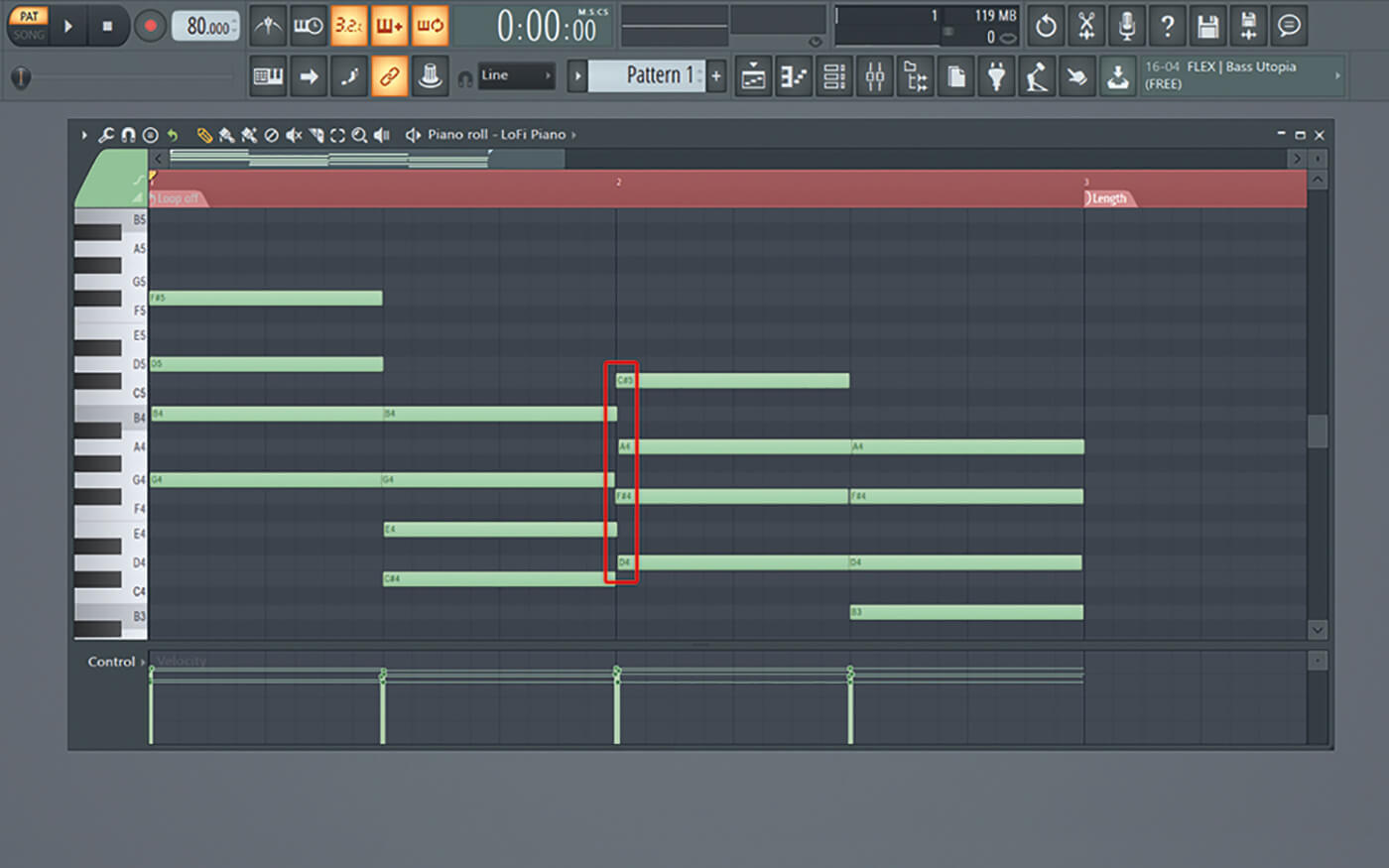 12. Pianists never hit all keys at exactly the same time. Adjust the timing of the notes by hovering over them or selecting multiple and holding Shift while scrolling up or down. Don’t overdo this or things will get messy.

CHOP SHOP If your chord progression just doesn’t fit your production or if you want to make it sound more hip-hop appropriate, try sampling your own progression and chopping it up. Even if you play back your chords in practically their original order, the effect of this restructuring will be more like that of a sampled vinyl record. Simply record your chord progression into Edison and start chopping. 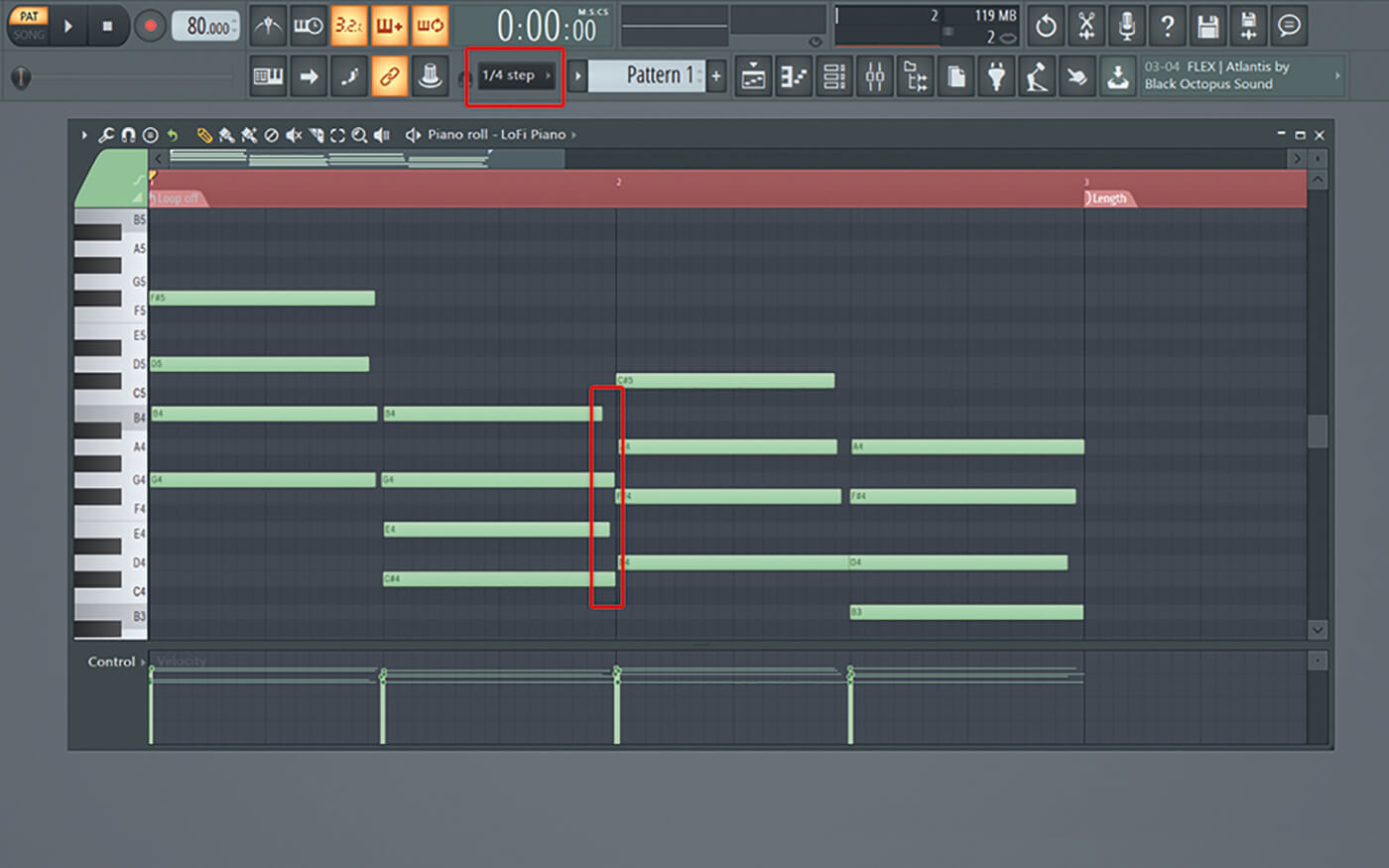 13. The same applies to the note lengths. Here, your adjustments can be bigger. Set your snap to 1/4 step and shorten some notes by one or two steps. Repeat steps 11, 12 and 13 until you’re happy with the results. 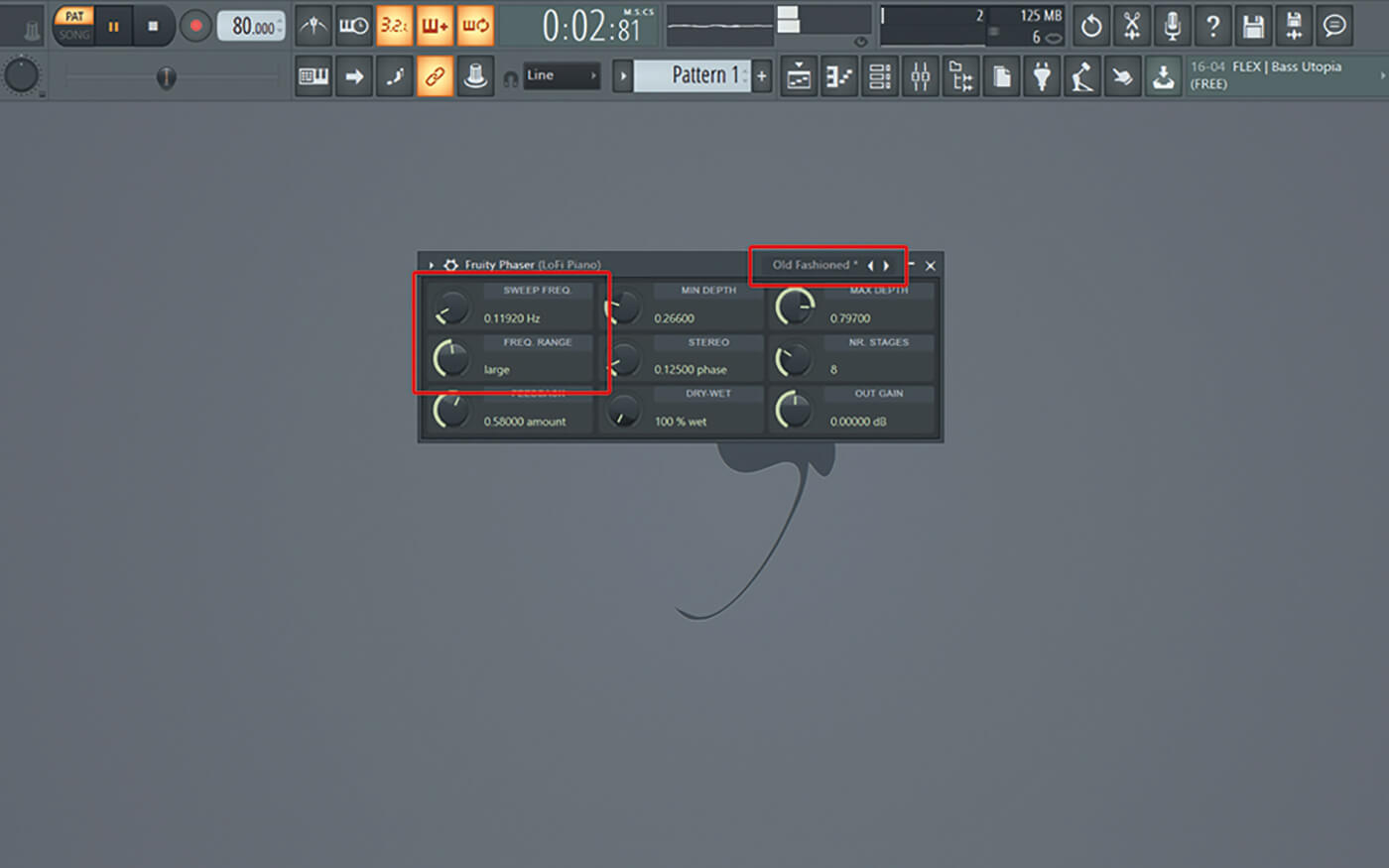 14. Make things sound older and more worn down by adding Fruity Phaser with the Old Fashioned preset. Lower the sweep frequency and the frequency range a little. 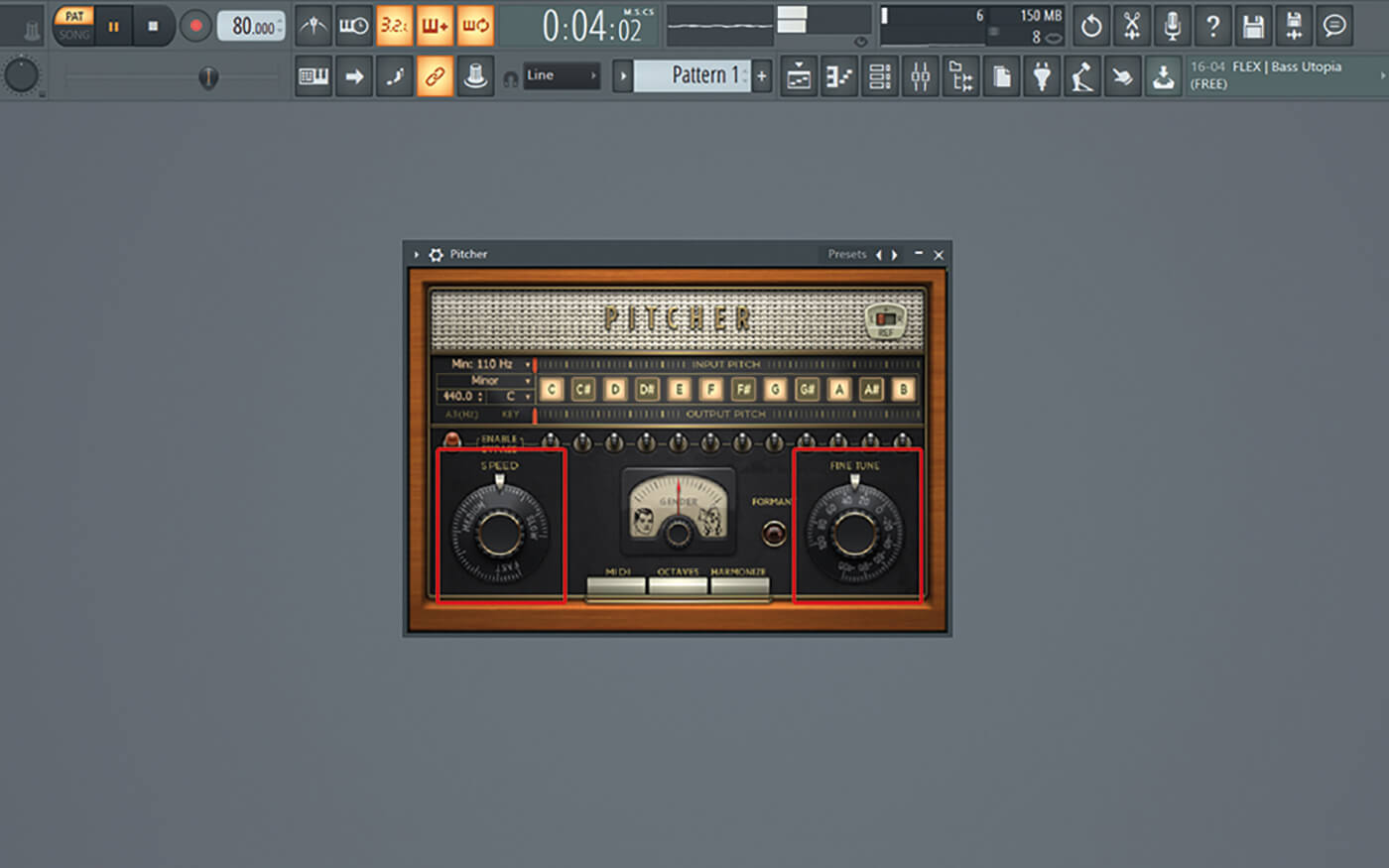 15. Add Pitcher to the FL Keys plug-in. Set the speed to somewhere between medium and slow, and set the fine-tune setting to about 30. These numbers will depend on how much of the Pitcher effect you want to hear. 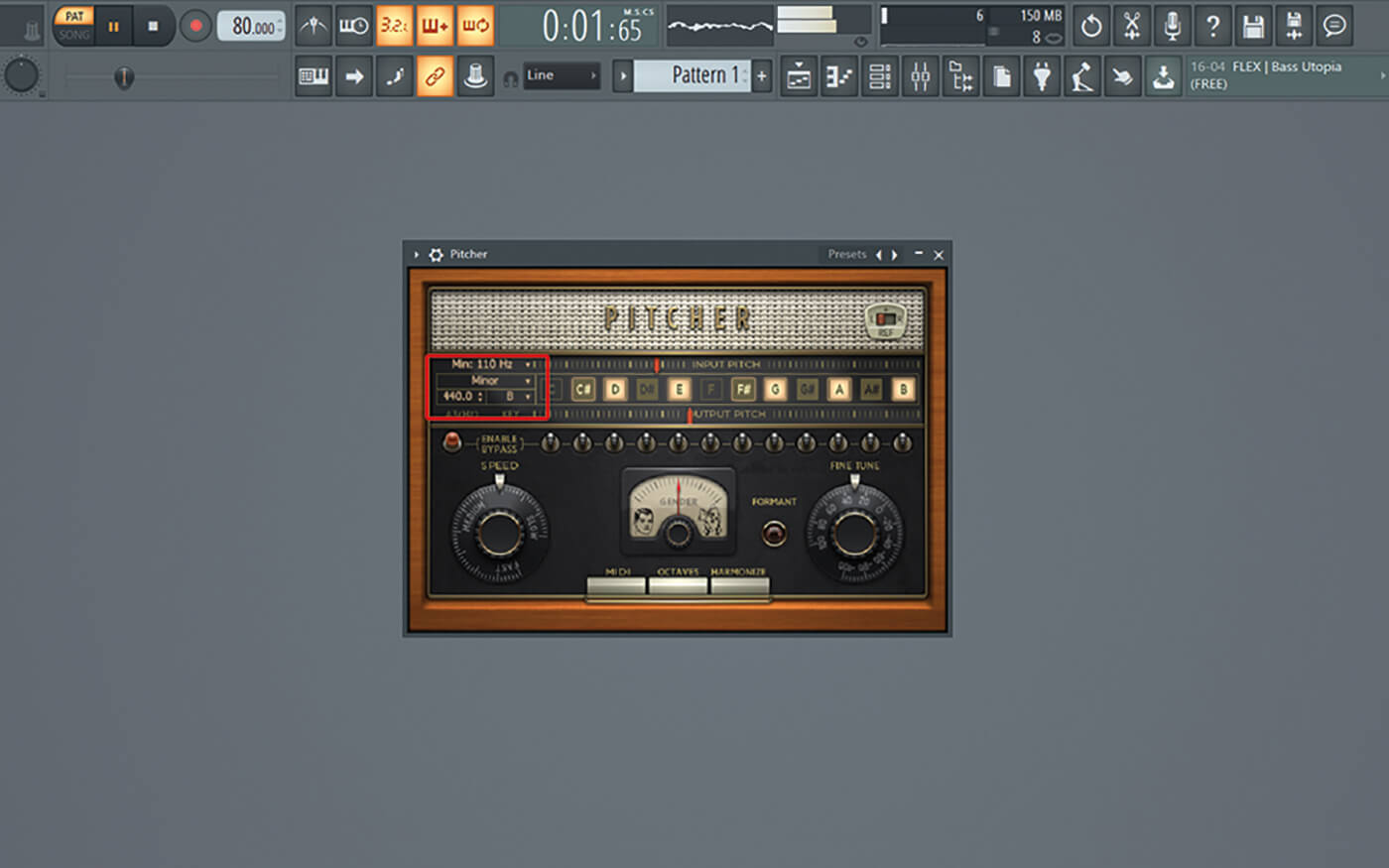 16. Select your chosen scale in the top left. Ours is the minor B scale. This will shift the pitch of your sound in between the notes in your scale. 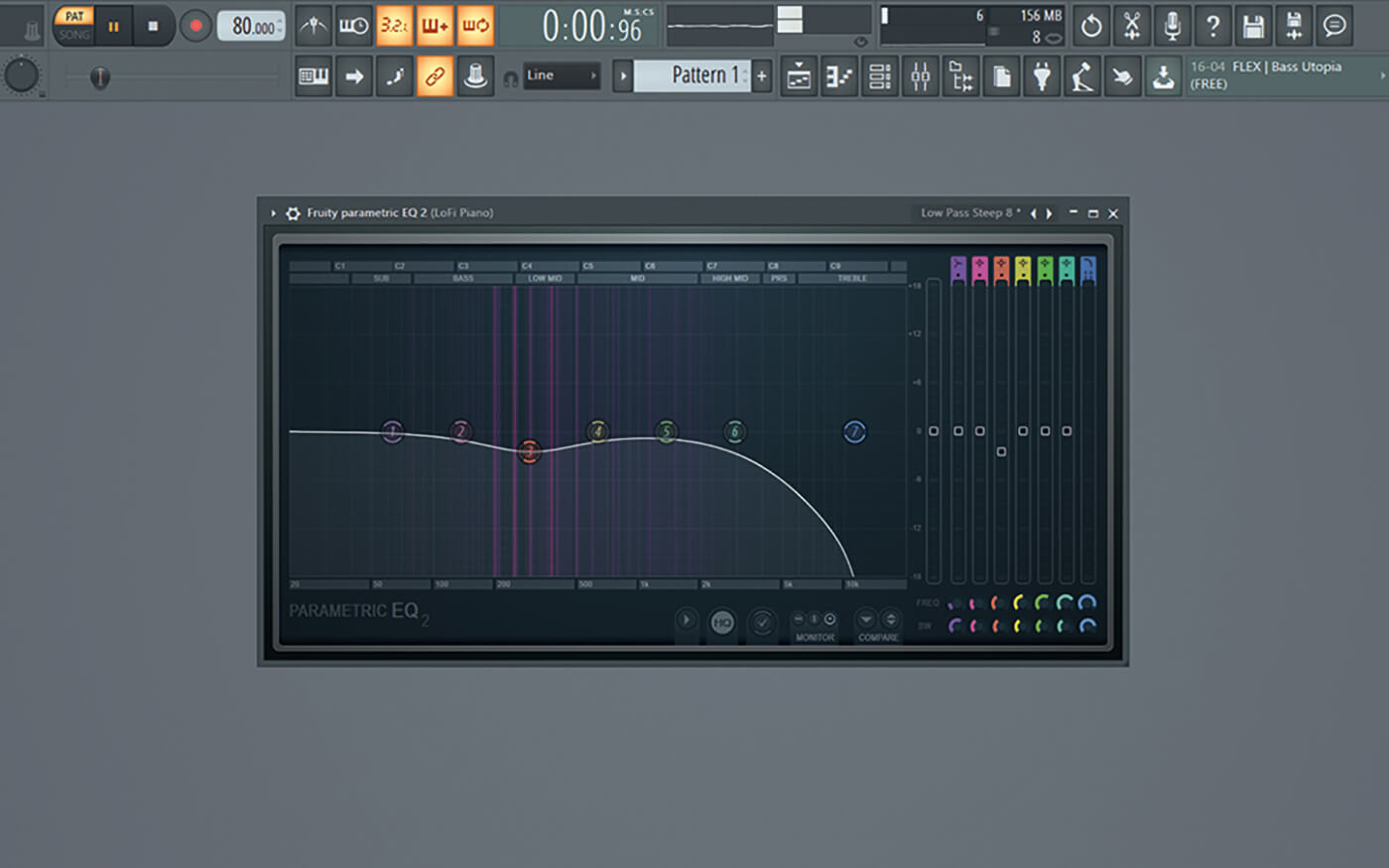 17. Add a low-pass filter. Select the Fruity Parametric EQ2 plug-in and filter out some of the highest frequencies. You can dip the low-mid frequencies too. 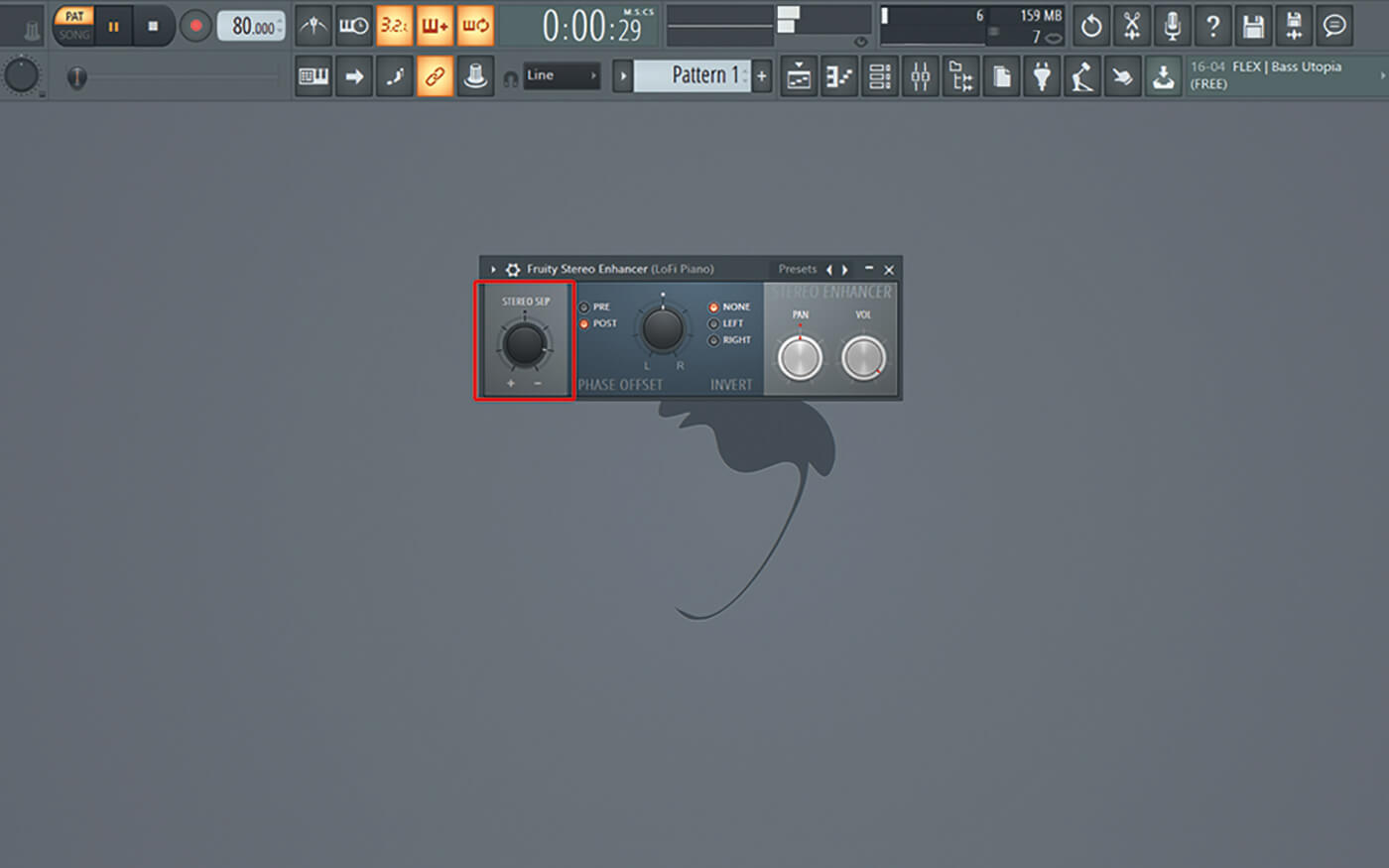 18. Make the sound more mono to bring the piano to the centre and add to that vintage flavour. Add the Fruity Stereo Enhancer to your effects chain and turn the Stereo sep knob towards the minus. Now play it on a loop, put your feet up and relax.