Dynamics processors are a mainstay of sound recording and can make the difference between paltry and top-tier results. Cubase has a healthy range of choice in this area to help ensure you end up with the latter. 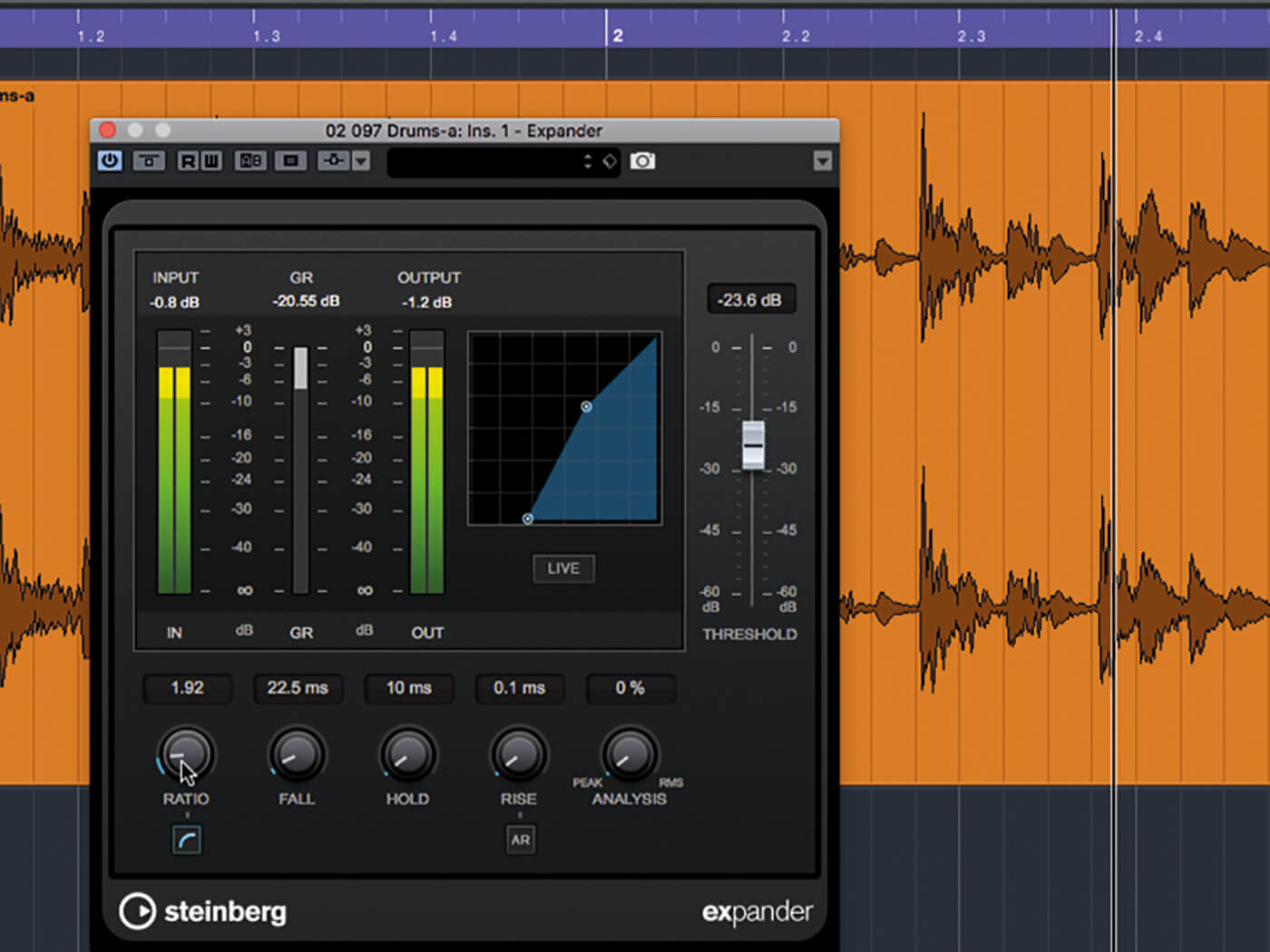 There are many types of dynamics processor, each capable of slightly different things. The best catch-all description is that they act like automatic volume controls – they modify the dynamic (ie volume level changes over time) make-up of a sound source, generally in response to the nature of that source. To put this into context, pretty much all dynamics processing is akin to riding a fader on a mixing console in order to enhance or reduce the volume changes inherent in the audio.

One of the reasons people have trouble when it comes to effective use of dynamics processing is that the results can be difficult to detect, and if they were any more obvious, it would likely indicate that you’re using too much of it. Once you’ve a good grasp on what the controls actually do, how they interact, and what the resulting readouts mean, things become much easier to judge.

No matter their intended function, dynamics processors tend to share a common set of parameters (although, of course, the impact of these varies depending on the type of processor). First and foremost is the threshold, which determines when the process should be applied and when it should not. This is measured from something called the sidechain or ‘key’ signal, which is typically a copy of the signal that’s arriving at the input. This is monitored to determine its amplitude, and if the amplitude exceeds or falls below the threshold, the process is engaged.

With the exception of gates, which simply open or close depending on the amplitude of the sidechain signal, the amount of processing applied is normally determined by a ratio parameter, such as 2:1 or 1:3. This describes the ratio between the input and output signal levels when processing is occurring.

For example, in a compressor set to a ratio of 2:1, for every 2dBs that the input signal rises above the threshold, the output signal will rise by only 1dB. In expanders, this is reversed, and in most expanders (with the exception of rare specialised upward expanders) the process is applied when the incoming signal falls below the threshold – this creates a greater variation in volume between the quietest and loudest parts of a sound while allowing the maximum loudness to remain unchanged. Using a high-expansion ratio also allows an expander to do the same job as a gate but with subtler results than the binary open or closed state of a gate.

The envelope-style controls found in dynamics processors will be familiar to those with synthesiser experience but it’s important to understand that they’re controlling the strength of processing and not directly sculpting the amplitude of the sound being processed. For example, in a compressor, attack determines how quickly full-ratio compression is reached once the sidechain signal exceeds the threshold, while the release setting tells the compressor over how long to reduce the ratio back to 1:1 after the signal falls below the threshold. These controls have a major impact on the subtlety (or not) of the resulting processing.

The most important meter in a dynamics processor is the gain reduction (or expansion) meter. This tells you by how many decibels the signal’s volume is being adjusted at any given time, and thus how powerful the processor’s effect will be. For example, if you’re aiming for gentle dynamics control, you won’t want it to sound too apparent – if you can hear it clearly, you’re using too much of it. But, if you read the gain reduction/expansion meter instead, you can be sure that you’re getting the tickle of control you’re after, even if you can barely hear it.

Because most dynamics processing modifies the volume level of a sound, most processors have a final gain-adjustment stage through which you can compensate for the drop or increase in overall signal level that results from processing. This is known as the make-up gain. Keep in mind that the sidechain signal, which effectively determines whether or not the process is applied, doesn’t actually have to be the same signal as the one being processed. This allows for some natty tricks, and Cubase makes light work of setting you up to create them. 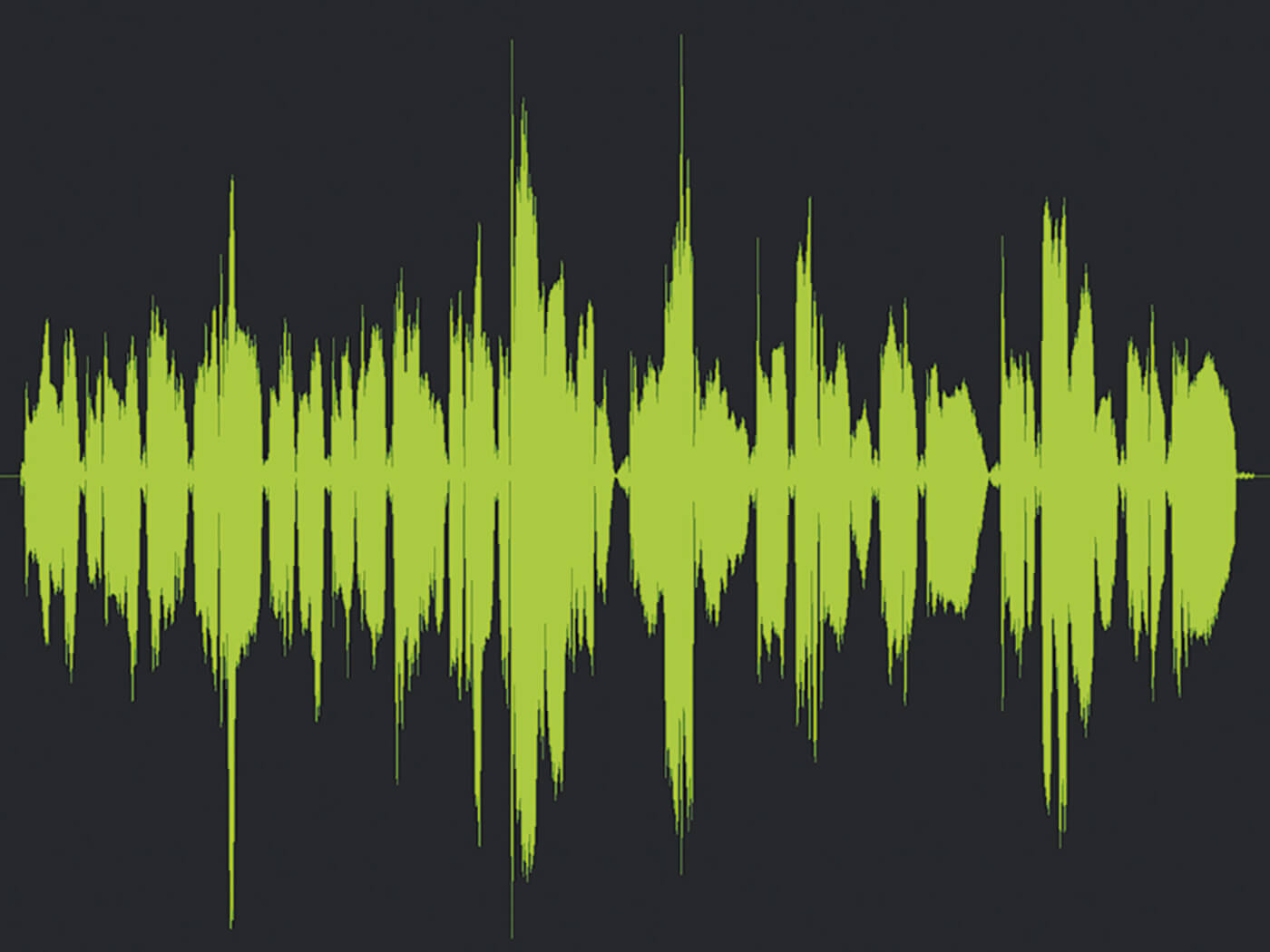 1. Open a project that includes a raw, unprocessed vocal part or find such a part and import it into Cubase. Vocal performances typically contain a lot of dynamic variation, which can be seen in the waveform and can be evened out using compression. 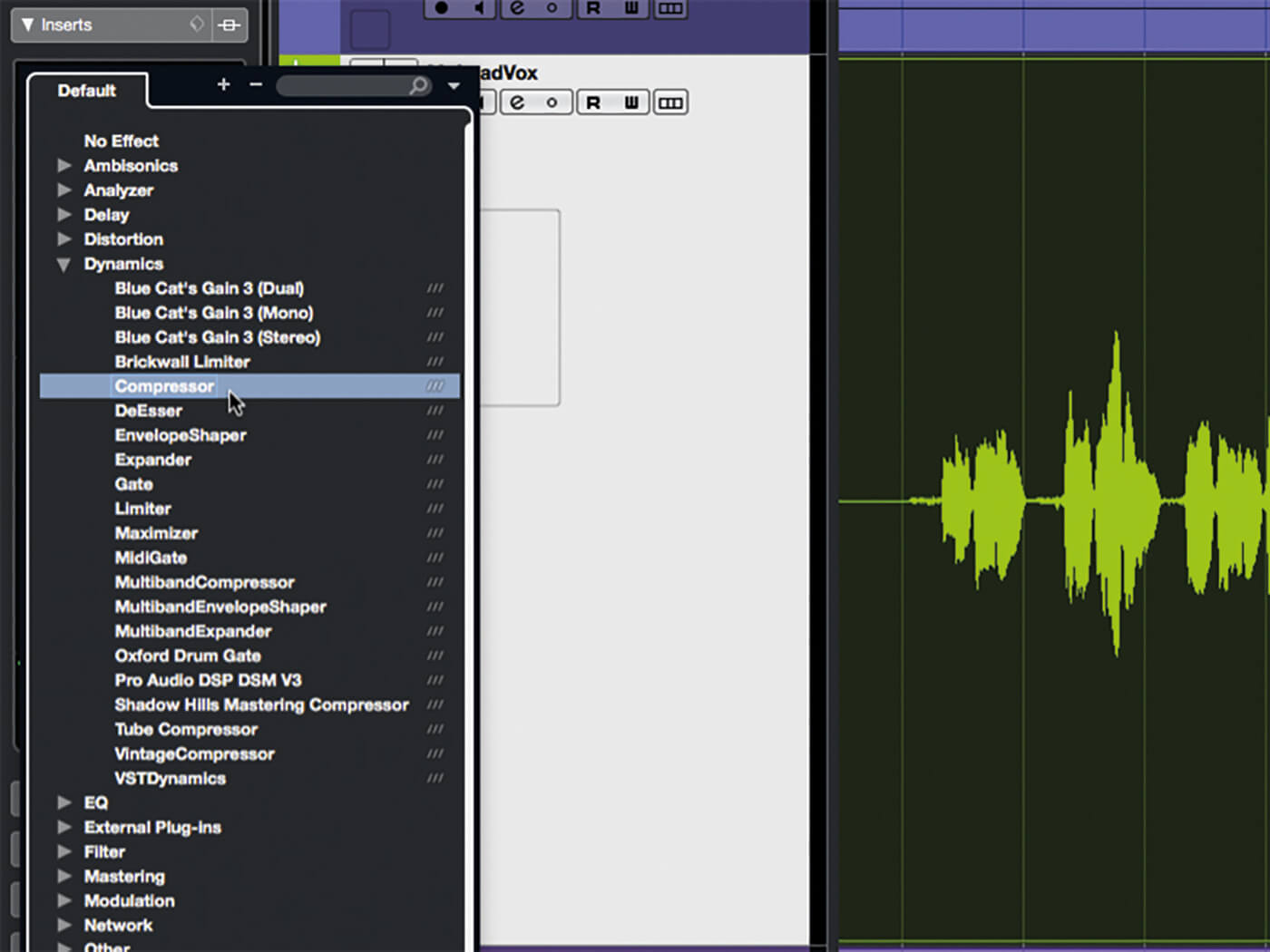 2. With the vocal track selected, open the Track Inspector, expand the Inserts section, and add Cubase’s standard Compressor plug-in, found in the Dynamics plug-in group, to the first insert slot. Solo the track if it’s part of a larger recording. 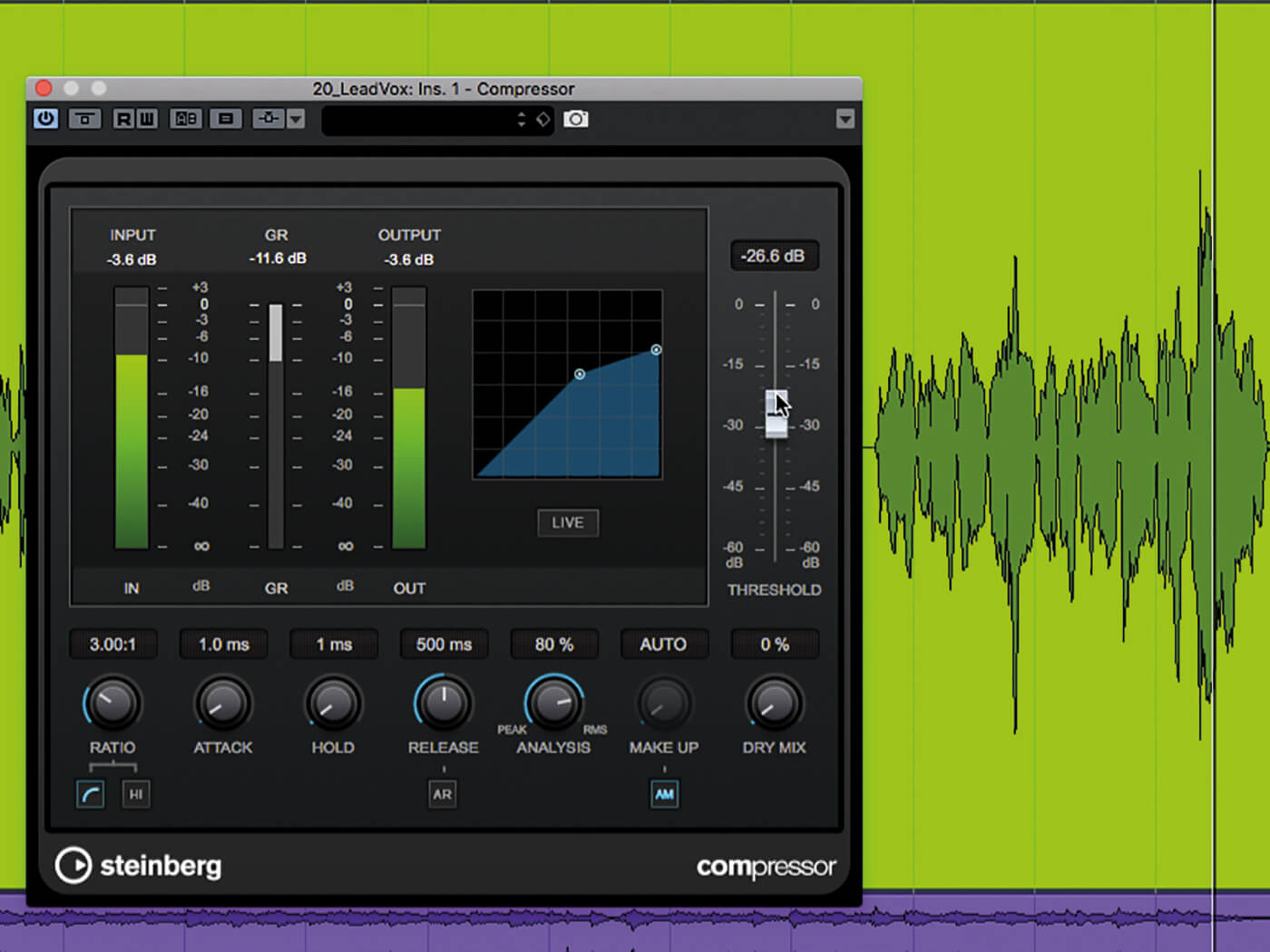 3. Set a 3:1 compression ratio, hit play and, while watching the GR (gain-reduction) meter and listening carefully, try to set the threshold such that no gain reduction is occurring during the vocal’s quietest passages. 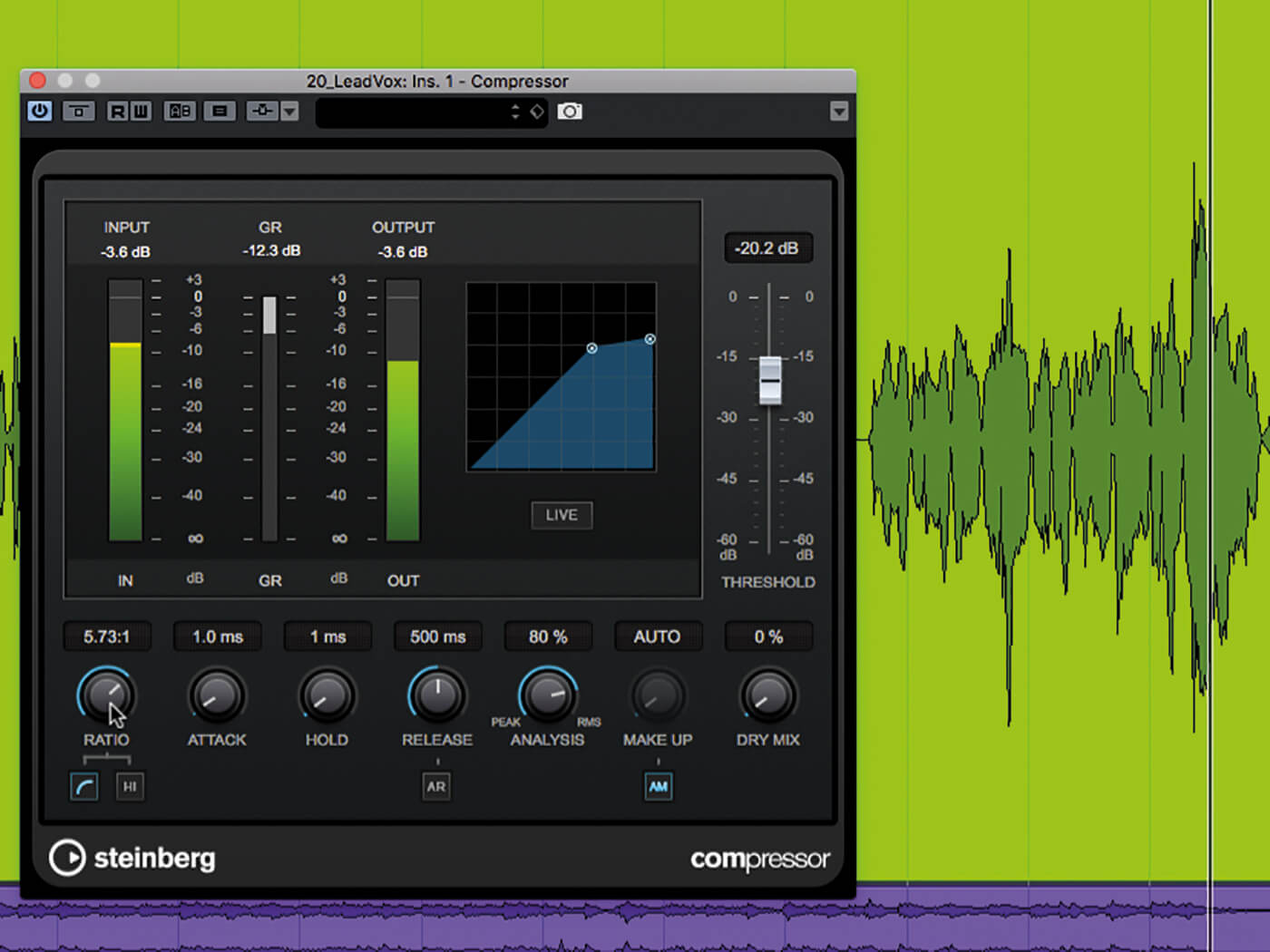 4. Listen to the difference between the quietest and loudest passages. If the difference sounds too extreme, increase the ratio; if there is insufficient difference, reduce the ratio. Remember, though, that a bit of fluctuation can be a good thing. 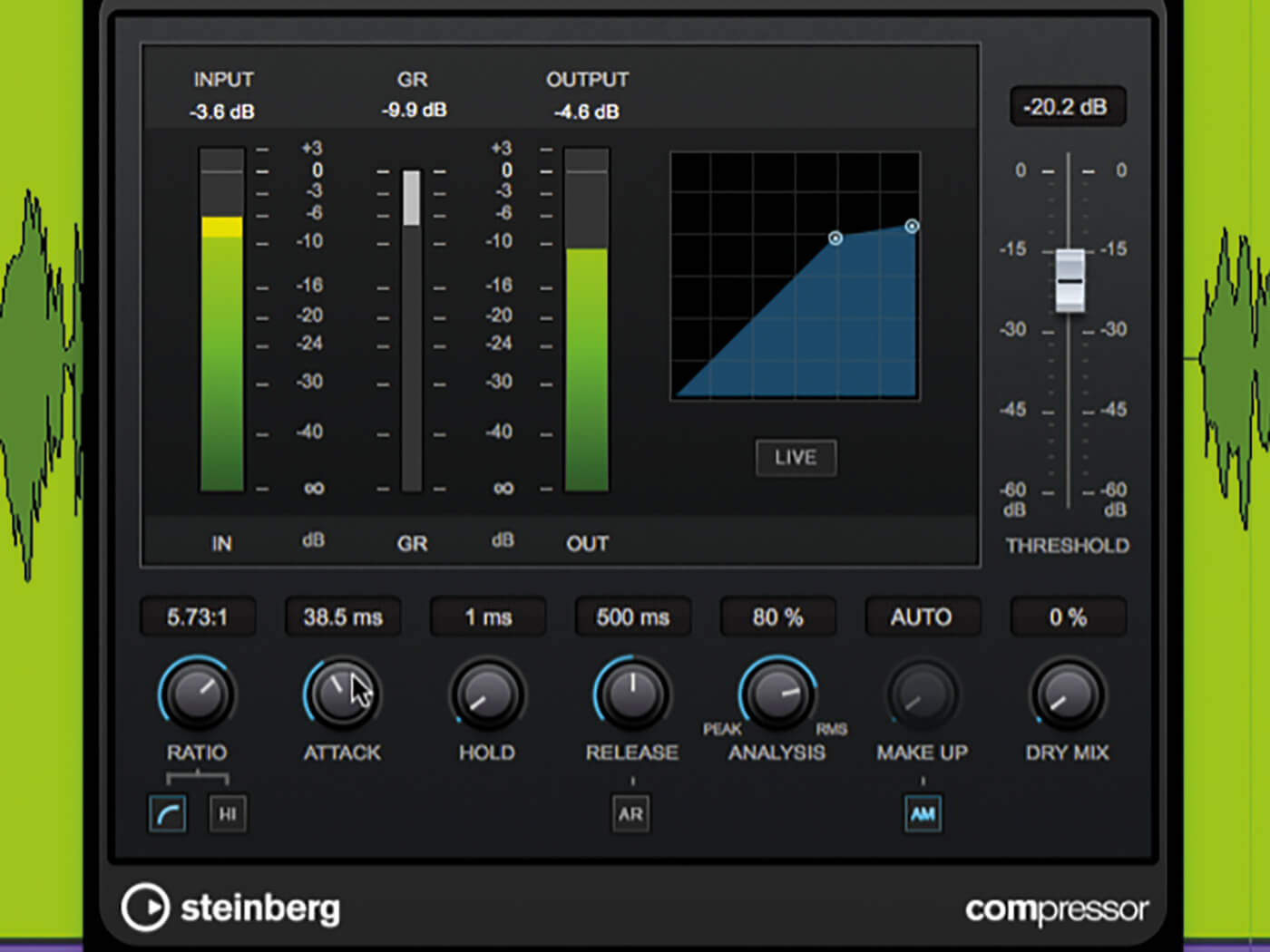 5. If at this stage the compression sounds too explicit or harsh, increase the attack time. This might mean that some peaks sneak through the compressor but the slower onset can mask the strength of the compression. 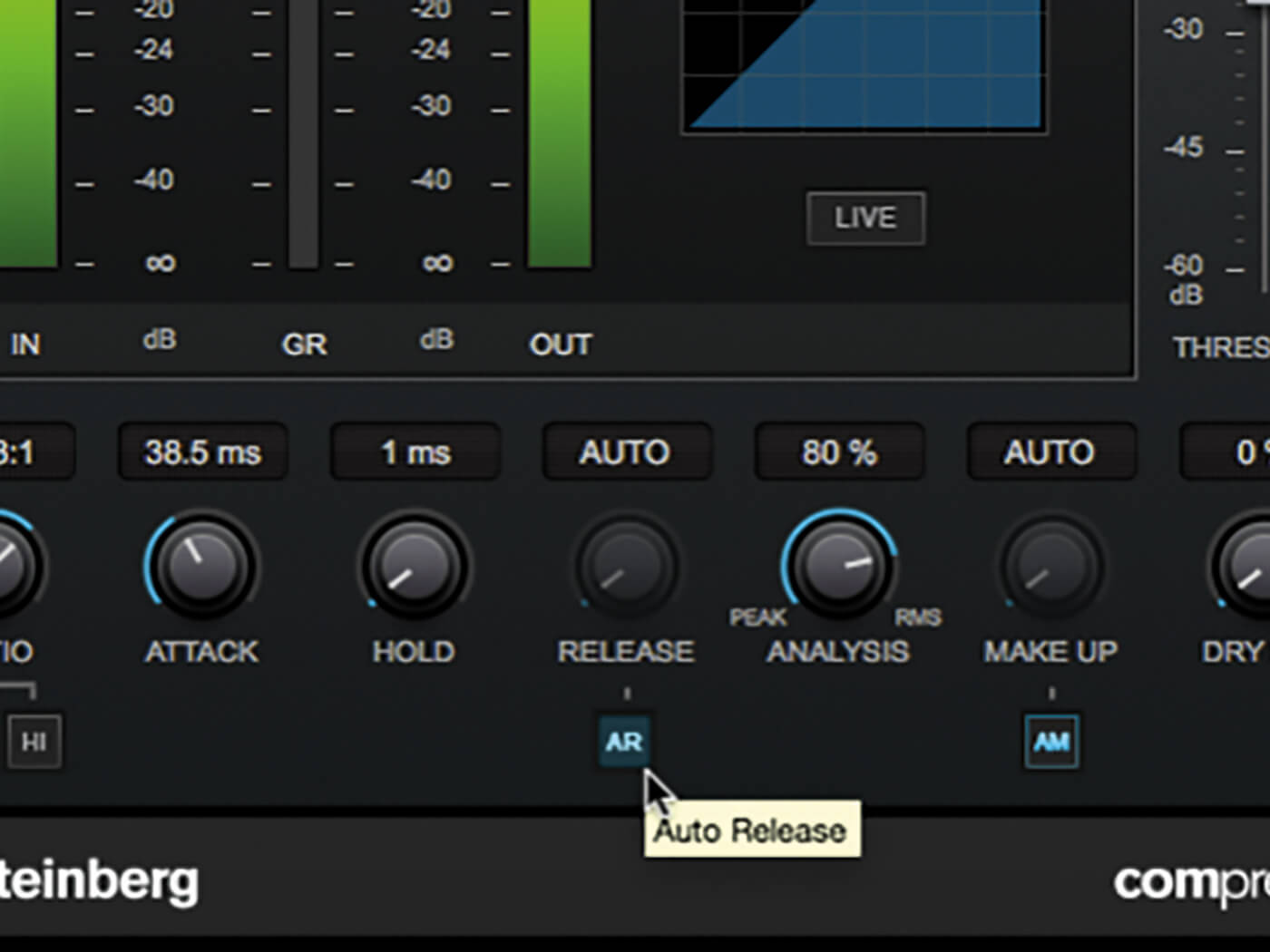 6. Setting a suitable release time isn’t typically too tough, but Cubase’s standard compressor makes it even easier with an auto-release setting that works out the best setting for your audio. Enable that now.

LIMITERS A limiter is essentially a compressor with fast attack and release times, and a high compression ratio. It’s worth adding a limiter after a compressor, as it can deal with any large peaks that the compressor allows through when using slower attack times. 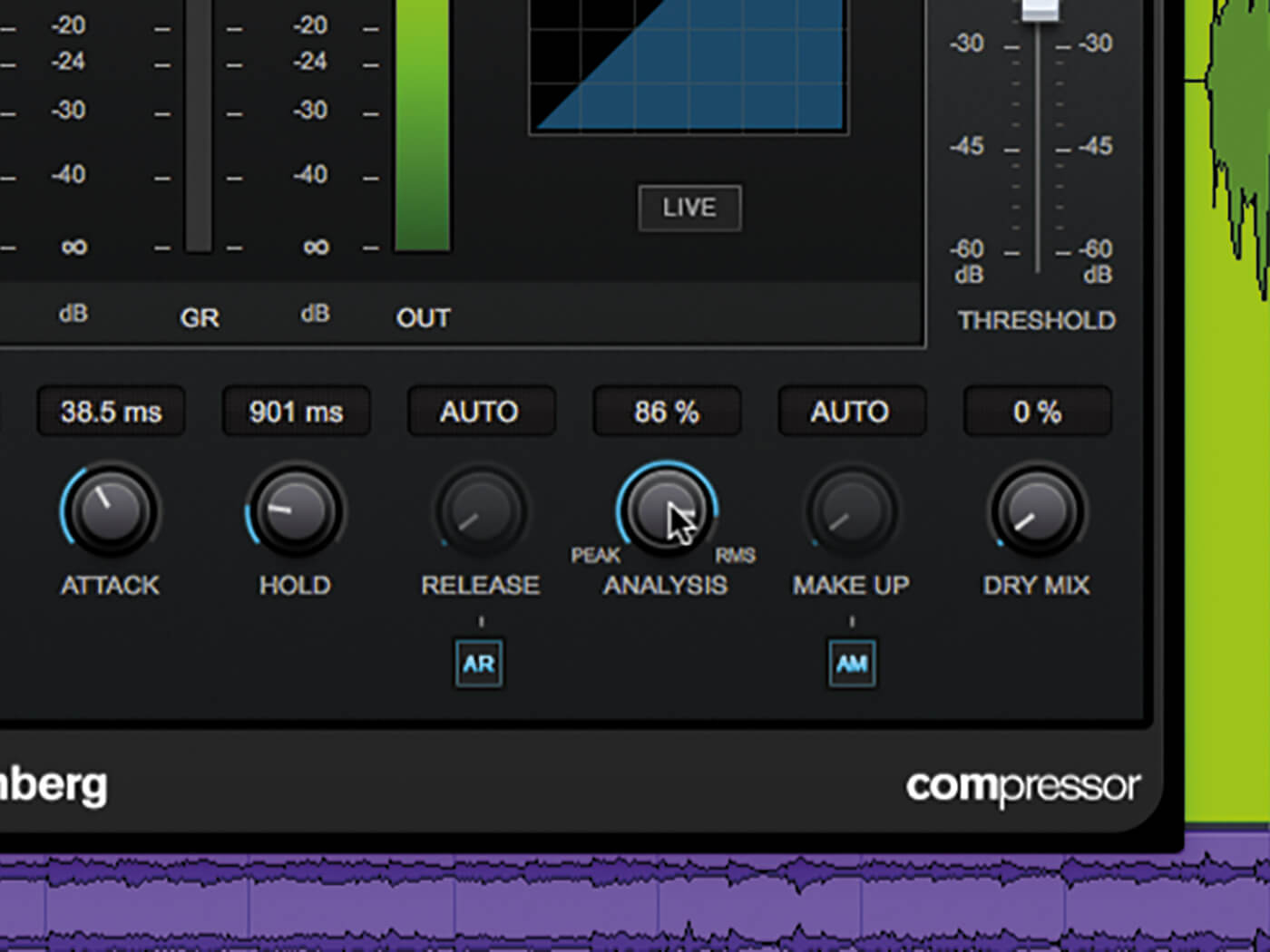 7. If you’re still getting a slightly jittery or frenetic compression response, either audibly or shown via the GR meter, dial in a bit of Hold time to help to smooth things out. Moving the Analysis setting towards RMS can also help. 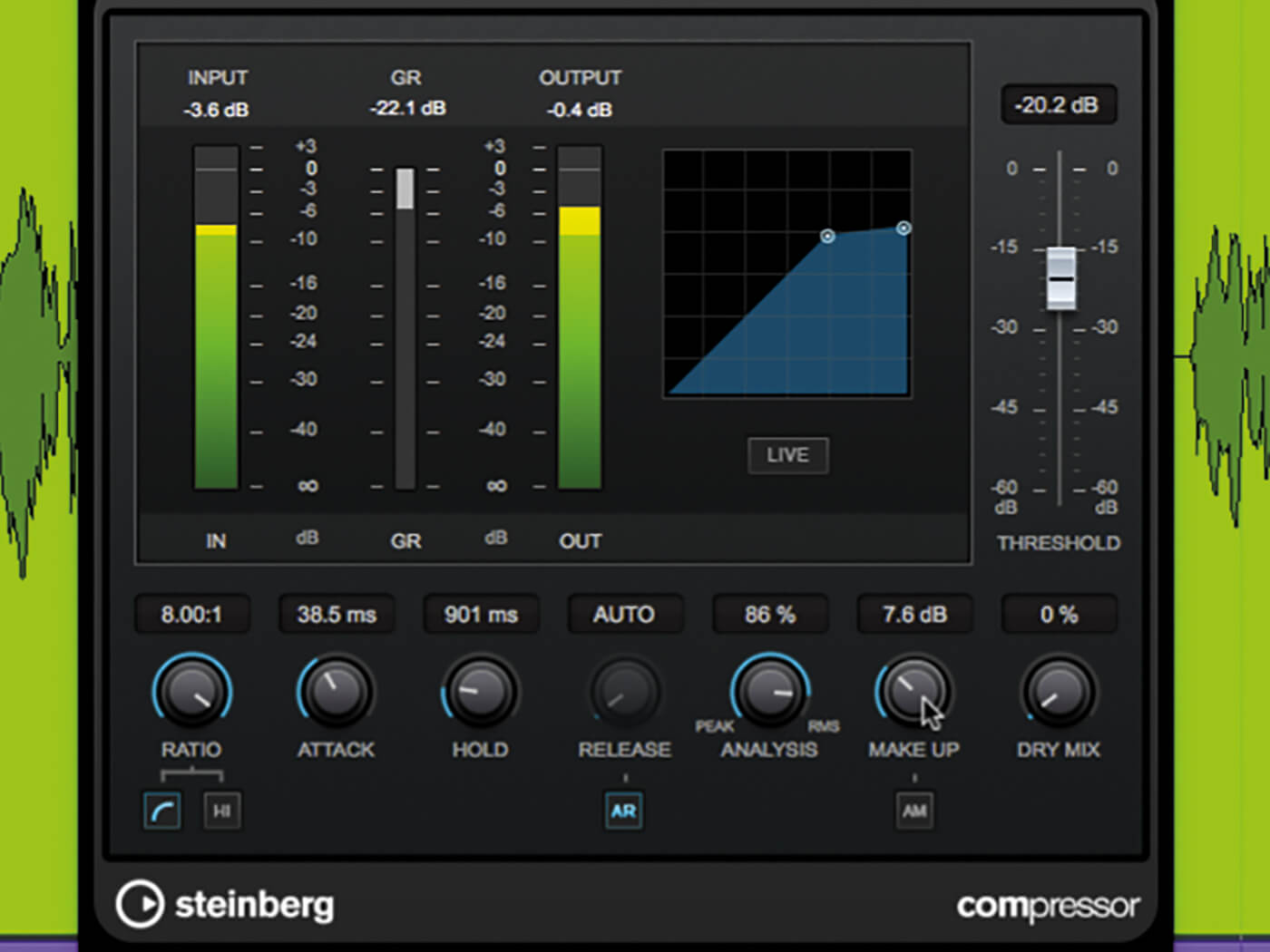 8. Disable the AM auto make-up gain switch. By reducing the volume of the loudest parts, you can create more headroom so that you can increase the gain to make the part louder than before. Do this with the Make Up dial. 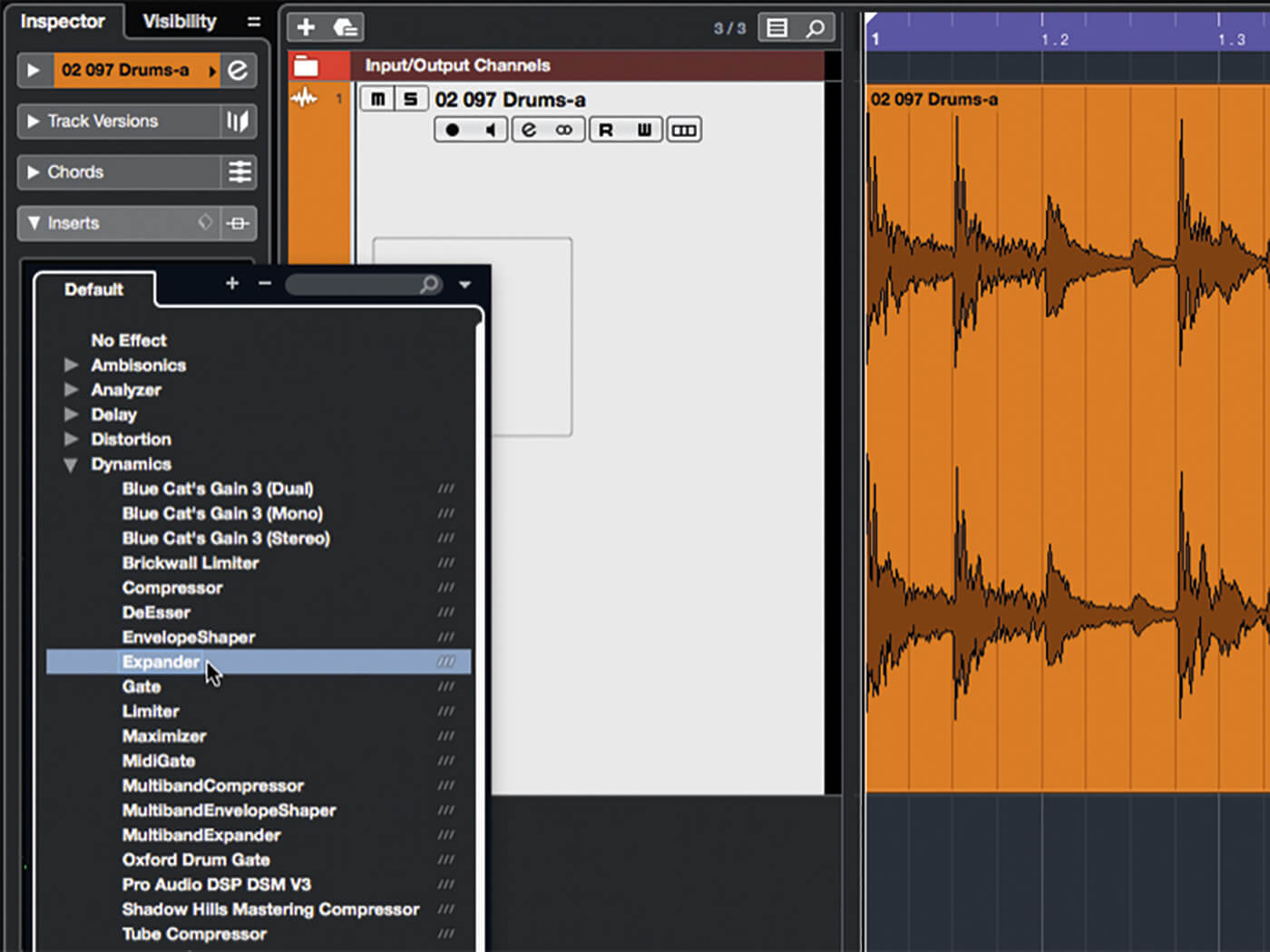 9. Create a new project and import an acoustic drum loop or recording that has some dynamic variance in it. Familiarise yourself with the loop before adding Cubase’s standard Expander to the track. 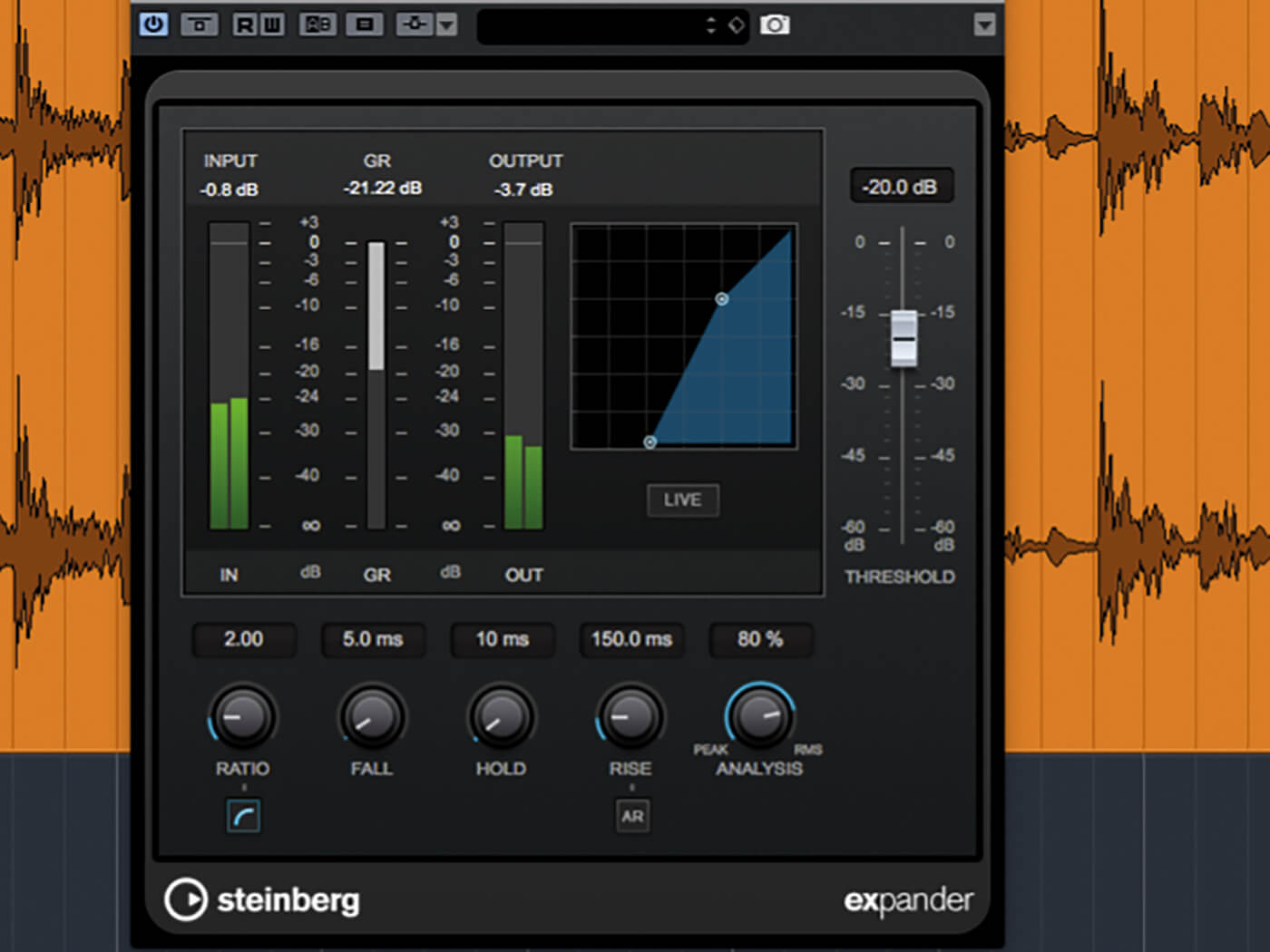 10. The aim here is to make the drum part sound more dynamic by reducing the volume of the quieter hits. The default expander settings are a tad extreme for this but should create an obvious result. Hit play and have a listen. 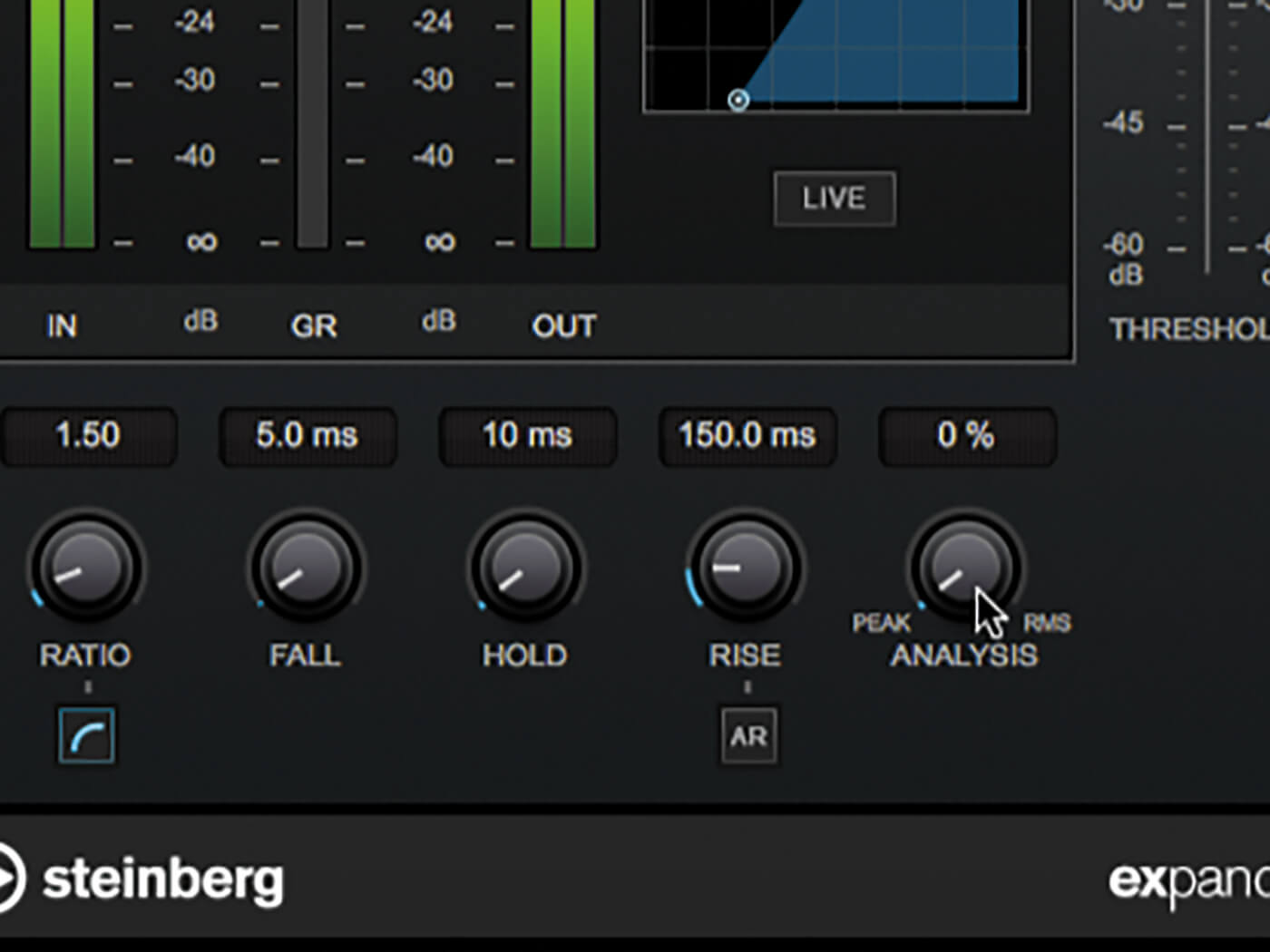 11. You don’t want too extreme an effect, so turn the ratio down to about 1:5. You also want the processor to be sensitive to transients, so turn the Analysis dial all the way to Peak. 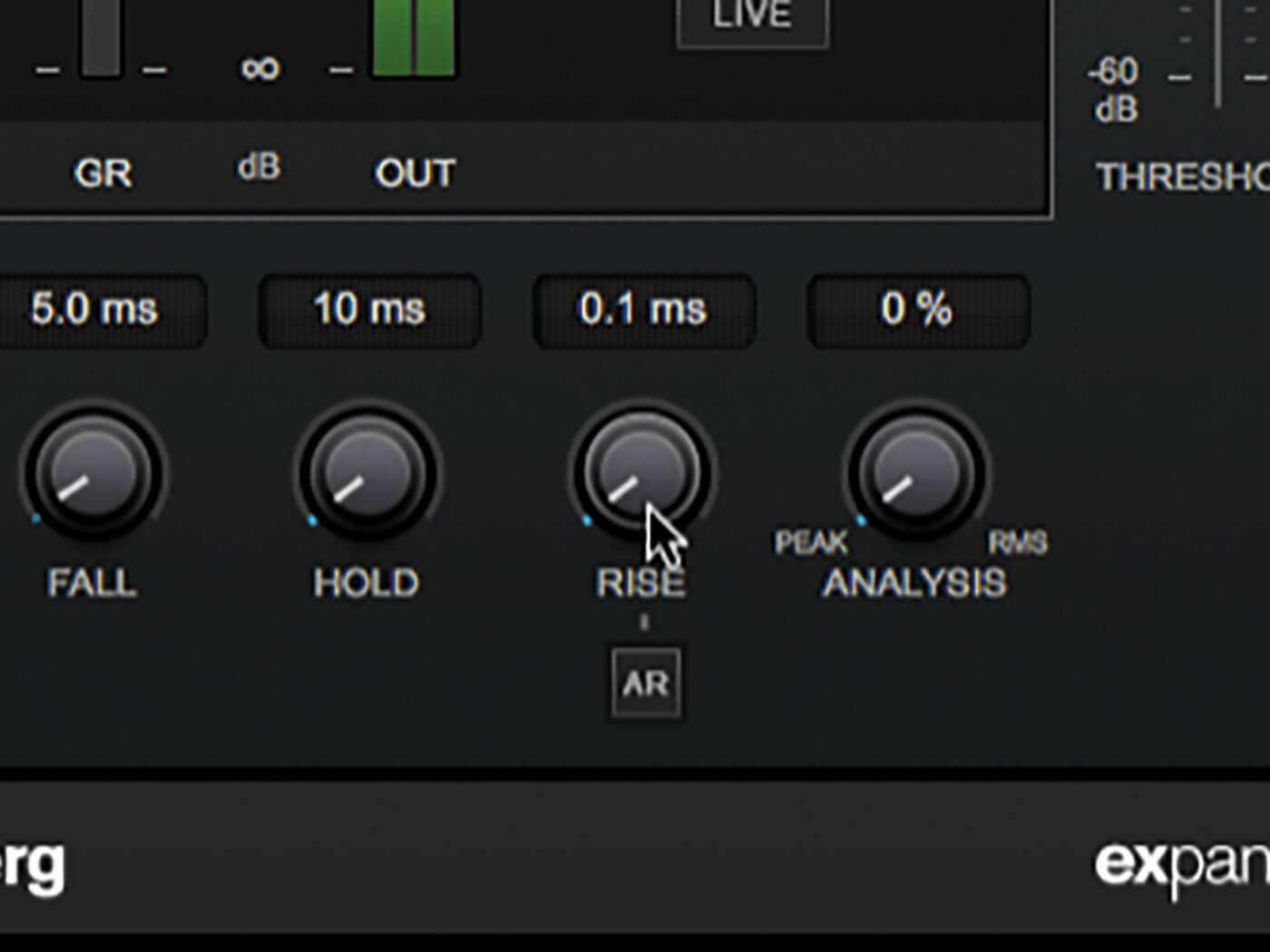 12. You want to leave the louder transients unaffected, and so need processing to cease rapidly when the sidechain signal exceeds the threshold (remember, expansion is applied below the threshold). To do this, set the Rise time to its lowest setting. 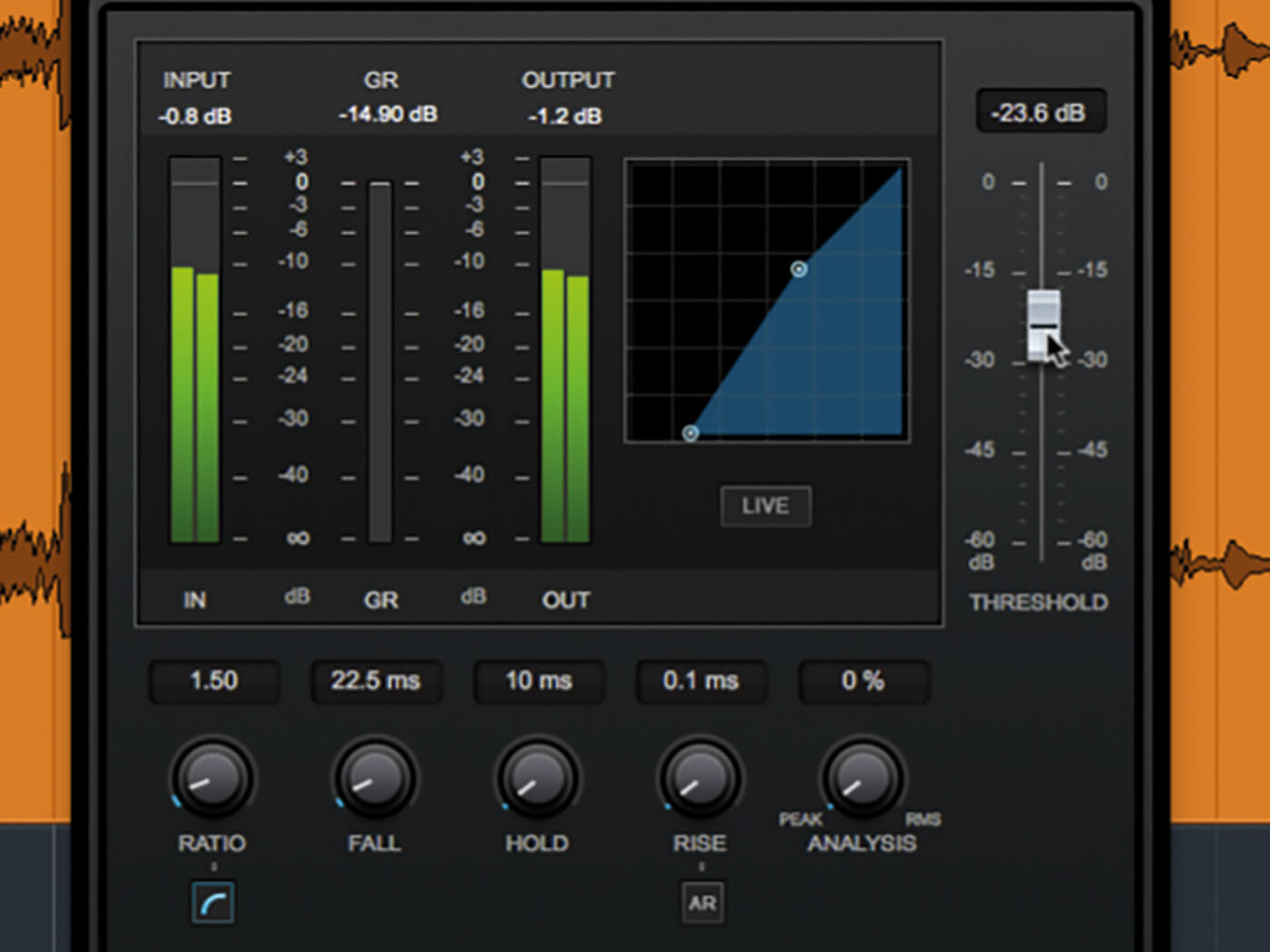 14. Tweak the ratio to modify the strength of the expansion effect. When done, compare the results with the bypassed sound – if you’ve been successful, you should notice how the expansion process has brought out the groove and subtleties of the drum part. 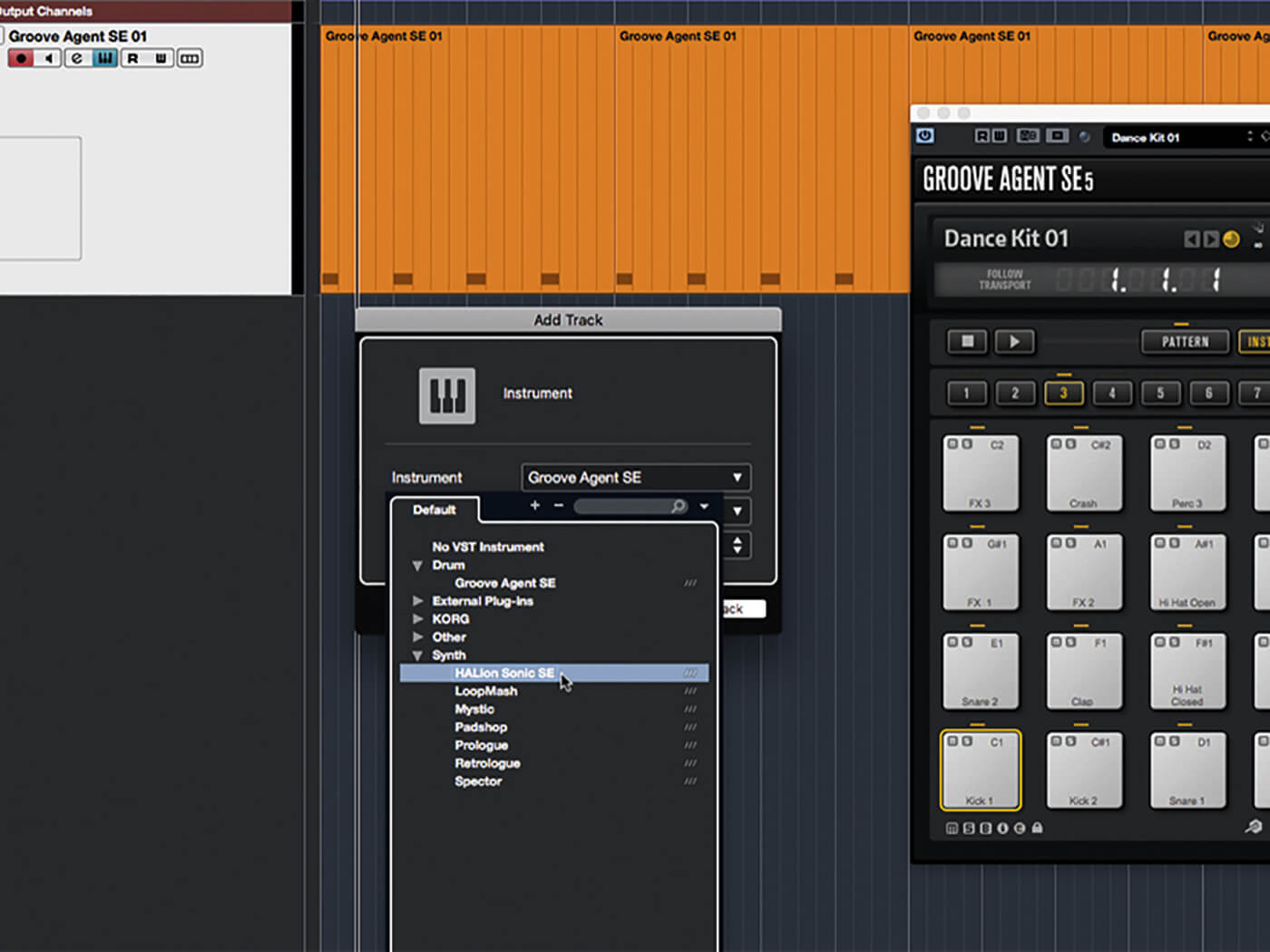 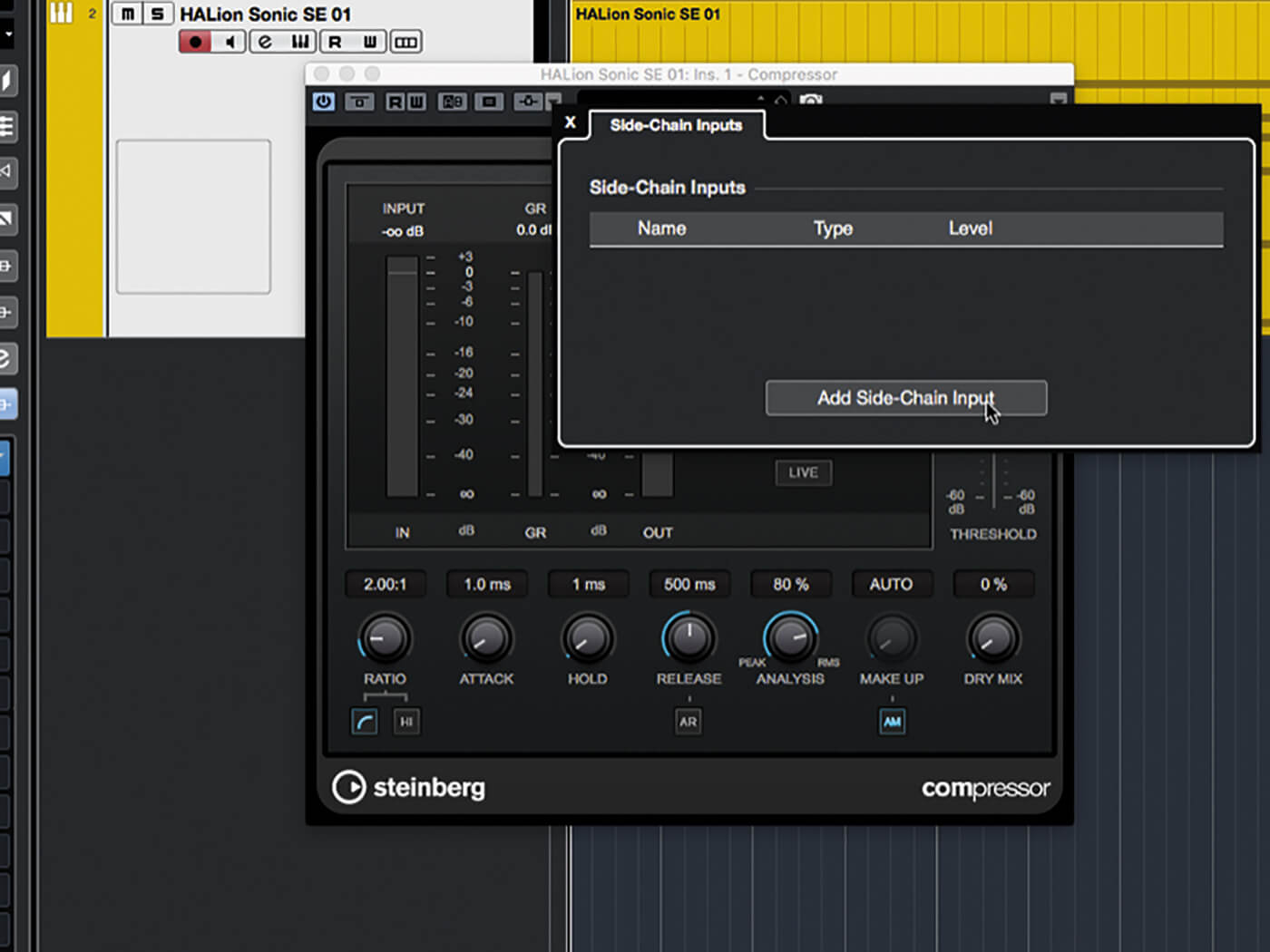 16 . With the HALion track selected, open the Audio Inserts section of the Track Inspector. Insert the standard compressor. On the compressor window’s toolbar, click the arrow to the left of the preset name field and select Add Side-Chain Input from the panel. 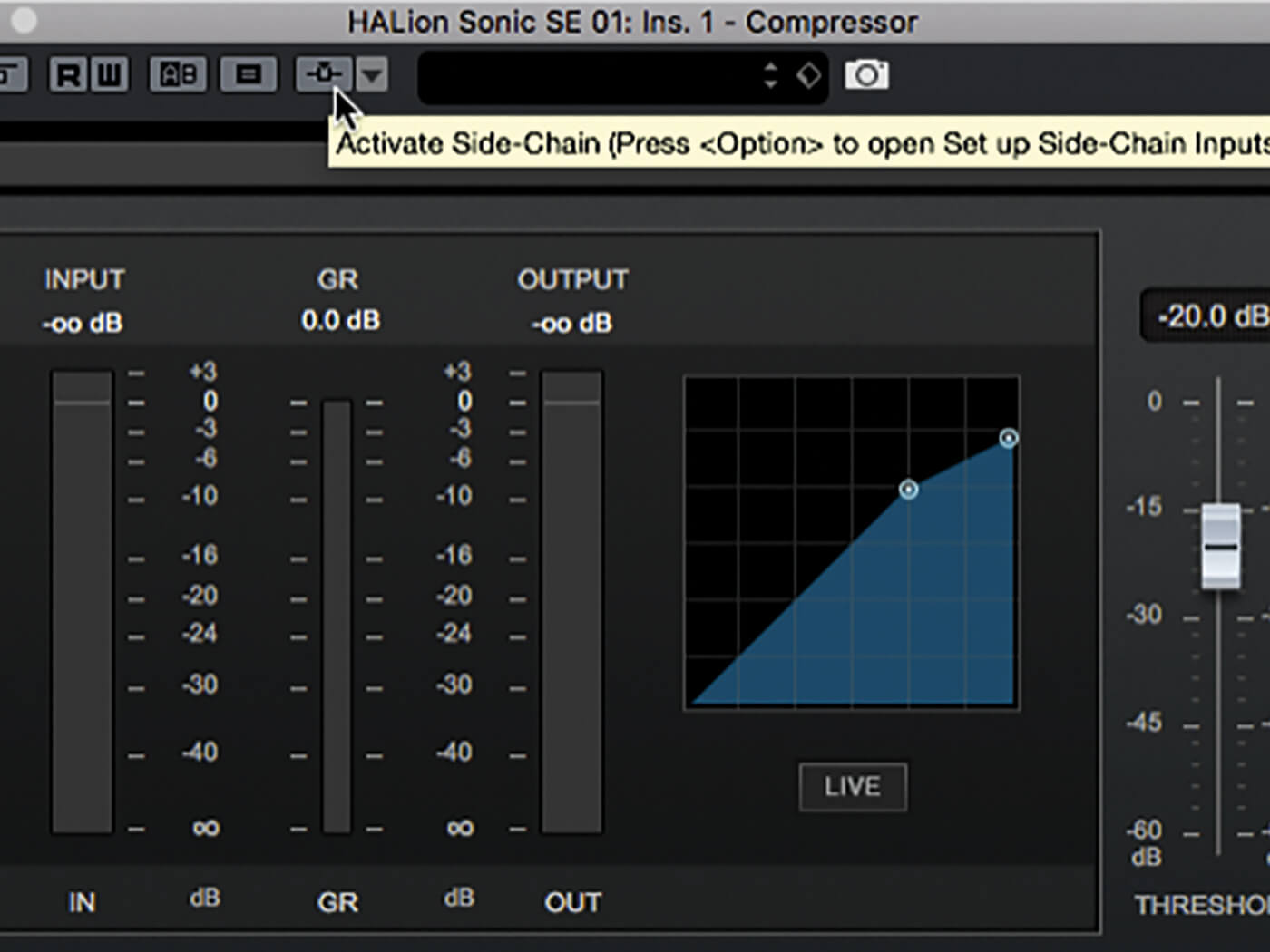 17 . Select the Groove Agent track’s entry from the pop-up. This creates a send bus from Groove Agent into the HALion compressor’s sidechain. Close any pop-ups and click the Activate Side-Chain button (see image). 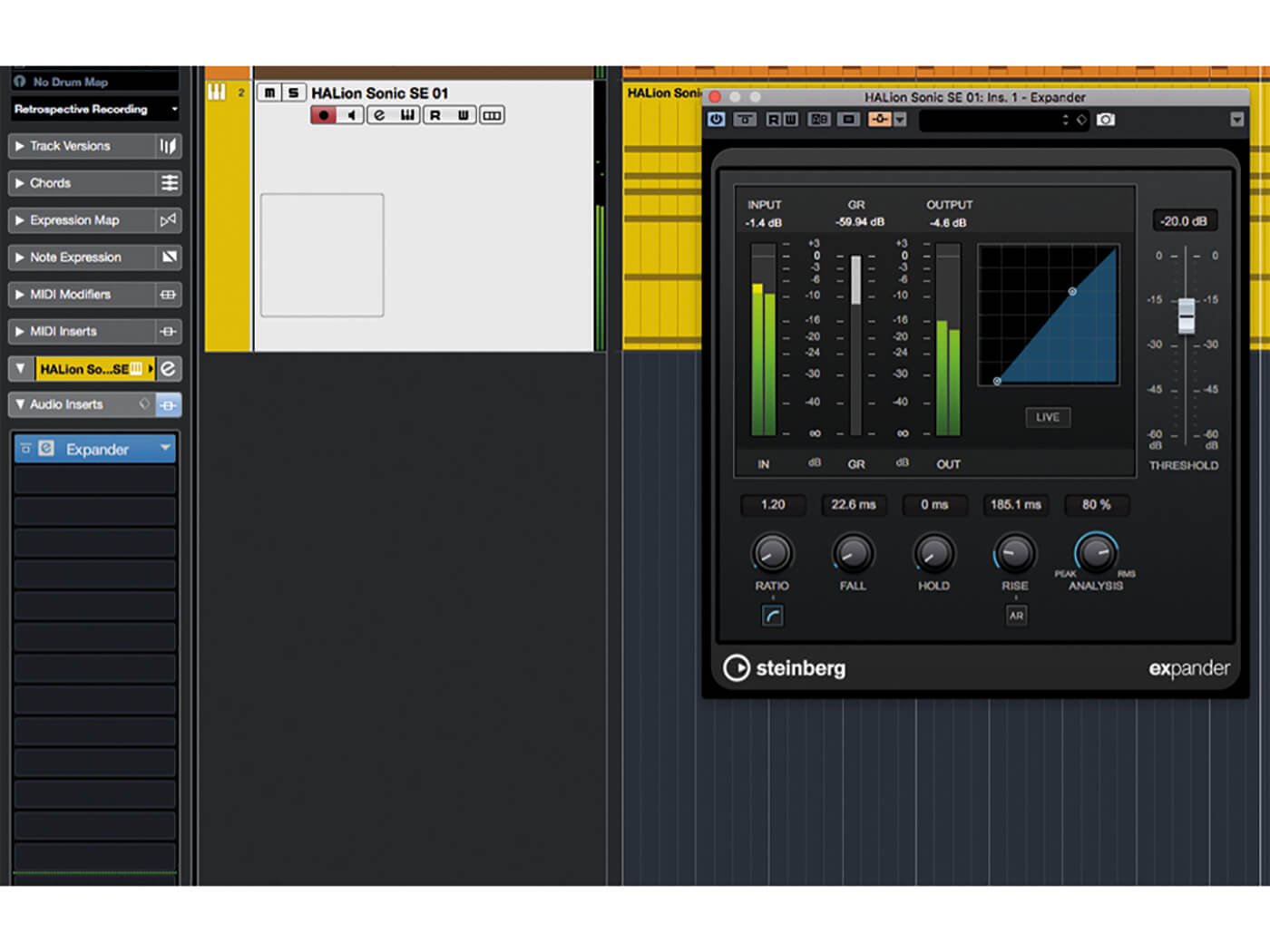 18. Hit play. You should hear the pad sound dropping its level in response to the kick part – this is known as ducking. Tweak the compressor settings to get the strength of effect that you want. For a pumping effect, use an expander rather than a compressor.