Loops might be most commonly associated with Ableton Live, but Cubase is perfectly capable of dealing with them too, as Tim Hallas explains in this Cubase Tutorial       When it came to writing this tutorial I found myself in something of a quandary, having spent a day in the very pleasant company of […]

Loops might be most commonly associated with Ableton Live, but Cubase is perfectly capable of dealing with them too, as Tim Hallas explains in this Cubase Tutorial

When it came to writing this tutorial I found myself in something of a quandary, having spent a day in the very pleasant company of the Steinberg  crew previewing version 7 of Cubase, which of course will have been launched by the time you read this.

So, what can I cover that will still be relevant in the new version? My decision is to take a look at the loops and looping techniques available in Cubase. For those of you thinking, ‘Oh no, not loops! That’s not music!’ I have to remind you that loops are here to stay, so it’s surely better to know how and when to use them than to dismiss them out-of-hand. Loops have been around much longer than we remember: early electronic pioneers used tape loops to create sound worlds and to manipulate and mangle electronic sounds repeatedly.

And we also need to remember that Stayin’ Alive by the Bee Gees utilised drum loops as far back as 1977. Following the tragic passing of the drummer mid-session, the band turned to drum machines but didn’t like them. They then listened to the already recorded drum part for Night Fever, recorded two bars of it to tape and looped it. The result is one of the most famous grooves of all time.

The loop feature in Cubase is arguably not as well-advertised as it is in some other software; nonetheless, it is definitely there and probably the best place to start is with the Loop Browser, which can be found by choosing Media>Loop Browser. 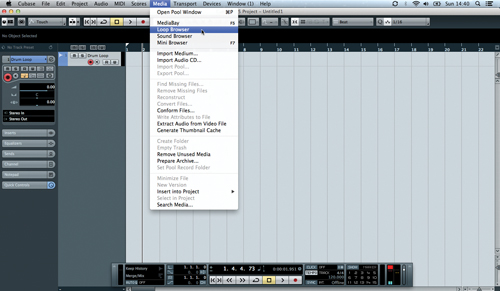 When opened, this brings up a large dialog that looks very similar to the MediaBay window (they are essentially accessing the information in the same way). The Loop Browser is split into three main sections: the category selection section at the top; the list of available loops that fulfil those category requirements in the middle; and a preview panel at the bottom containing basic transport controls and a graphic of the waveform of the loop. 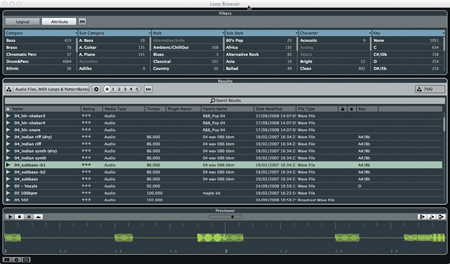 We’ll begin at the top and find the loops we want. The categories run roughly left-to-right, with instrument groups on the far left followed by sub-categories for specific instruments, genre, character and, finally, key on the right. A feature in this that I particularly like – and one that isn’t readily found in other DAW software – is the counter next to each category that tells you how many loops have that tag in the database – for instance, there are 633 loops in the key of C but only 158 in C#/Db. This constantly updates as selections are made and provides you with a live figure of how many loops are left with that tag rather than a static number (you may suddenly find that you have too many tags selected and there are none left with all the categories you have selected).

As it is probably the most common use for loops we will begin with a drum loop, perhaps to use for the beginning of a dance track or – how I most often use them – as a placeholder during arrangements until the ‘real’ drummer turns up for the recording session. I’ve selected Drum&Perc to narrow down the options to just percussion and then also selected Beats>Pop/Rock to get the potential candidates down to a manageable number of files to audition. 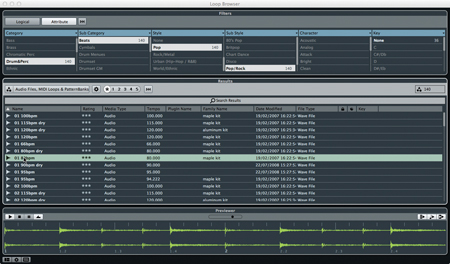 Once you have all your preferred categories selected you can audition them to find the right loop. To do this, move down to the main list in the middle of the window and click on individual loops. As you do this the loop will automatically play back and a preview of the waveform will appear in the section at the bottom of the screen. There is also the facility to filter loops via the buttons at the top, which enable you to select only MIDI or audio loops and sort by key, tempo or name. You can also filter by ratings, but as I haven’t given any of my loops a rating – a loop might merit five stars for one project but be totally useless for another – this feature seems somewhat superfluous.

Once the file is in the preview window you are presented with basic transport controls for playing back the raw loop. The all-important Cycle control is also present, enabling you to hear how well the loop links back into itself. On the right-hand side of the preview live two little controls which are often overlooked: the Align Beats to Project button and the Wait for Project Play button. The former changes the playback speed of the previewed loop to that of the project; the latter will play only the preview and the project at the same time. However, if you want to hear the previewed loop at the same time as the project and in time with the project you need to press both buttons. This might sound rather long-winded, but, on reflection, if you have a tempo-free loop you might not want the speed changed, so having the controls separate works well in this respect.

Finally, once you have selected your loop you can simply drag-and-drop it into the Arrange window. Alternatively, right/[Ctrl]-click on the selected loop and you are presented with several options for inserting it into the project at various locations.

After loading your loop into the Arrange window – either by manually dragging it in or by specific placing directly from the Loop Browser – you may want to do some additional editing to alter the way in which it works within the project. Obviously, the easiest and most commonly performed task is to loop the file, as that is the purpose of a loop! To do this, click on Edit> Functions>Repeat ([Ctrl]/[Cmd]+[K]) and select the number of repeats you want.

This is slightly different from those DAWs that have a simple drag system, but it works perfectly adequately nonetheless. The difference here to other loop copies stored by other DAWs is that each copy is just that, a copy, and can be edited totally separately from the others.

Unlike most pre-programmed audio loops, those within Cubase can be treated with all of the software’s time-stretching and pitch-quantising tools. 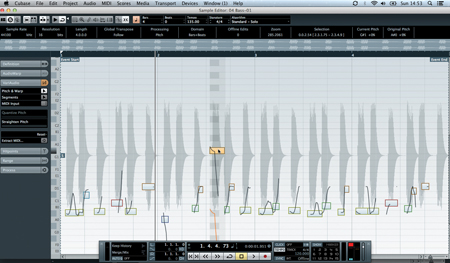 To access these windows, double-click on the loop you want to edit and it will open in the Sample Editor. All of the usual tools available for audio editing will be available for you to use on your loop. However, as already mentioned, if you have made any alterations to your original loop and repeated it across your project you will need to re-do the changes, as they won’t be copied over to the repeat instances.

If you are bored with pre-programmed loops but want to store some of your own for accessing later, Cubase enables you to do this with MIDI very simply, though doing it with audio is not so easily achievable. To create a MIDI loop, start with a MIDI or Instrument track and record the part or pattern that you want to store. Once you have done this, edit it as necessary via the Key Editor

and tidy up any timing imperfections via Quantisation (Q). This is important when creating a loop for the obvious reason that it will be repeating over and over and the timing needs to be perfect in order to loop back into itself accurately every time – even a minor glitch will eventually become noticeable.

Once the loop is in its finished state click on File>Export>MIDI Loop. 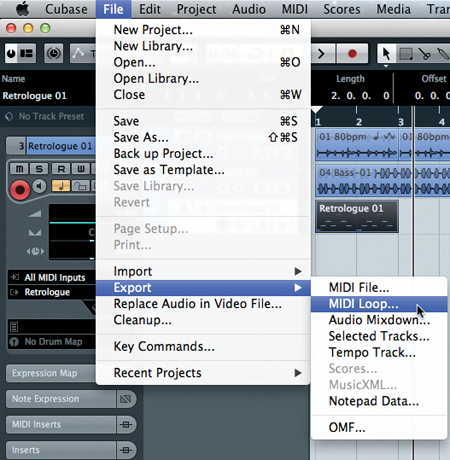 This opens up a dialogue box that enables you to name the new loop and associate relevant search tags with it. You can see from my example that I have used bass and electronic tags for finding it in the future.

Once everything has been named and labelled correctly simply press OK and the loop will be added to the loop library. To find it again, re-open the Loop Browser and you’ll see that just above the main list of loops is a search panel: if you search for your new loop it should appear every time you need it in a project.

A looping tool that Cubase advertises more prominently is LoopMash, an instrument for the live manipulation and deconstruction of multiple loops simultaneously that can be used to create totally new sounds. It has good integration with the Loop Browser and supports drag-and-drop between the different tracks of the LoopMash instrument. 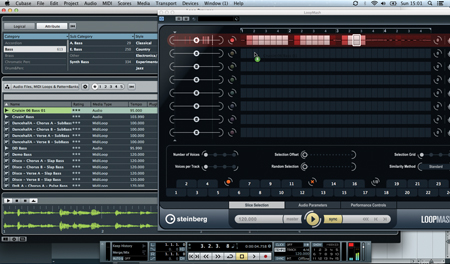 For more on LoopMash, see the article in our magazine, Issue 106, Jan 2012, and use the techniques described in combination with those here and create your own loops to use with LoopMash.

Exploring the loop-based features of Cubase 6.5 is something I strongly encourage you to do, even if you don’t use loops in much of your everyday music-making. I find the ability to quickly load up a loop to play along to when tracking in the studio – even if it’s replaced later on – invaluable. For those of you who create music in electronic genres, listen to some of the more experimental sounds for inspiration and then adapt them for your own purposes. And since this article is about loops we need to get back to my first point: Cubase 6.5 is about to be replaced by Cubase 7, so let’s see what wonderful music we can make in preparation for the next incarnation of the software.