Cubase is blessed with all the necessary talents for generating convincing harmony parts – even if you aren’t. Tim Hallas shows you how in this Cubase tutorial     Technology offers us a unique approach to making and recording music as it’s no longer necessary to enlist the services of bandmates to fill the roles […] 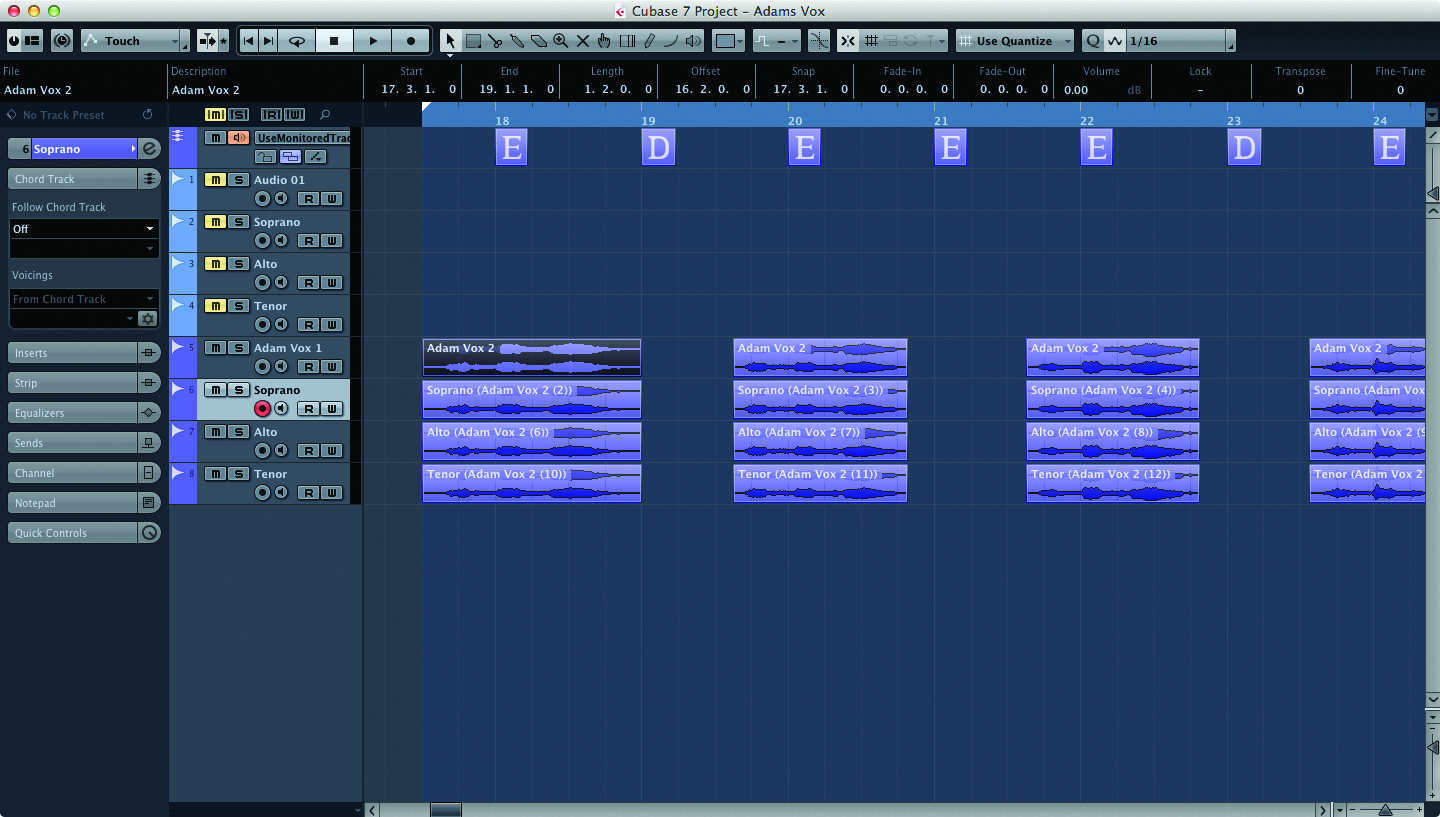 Cubase is blessed with all the necessary talents for generating convincing harmony parts – even if you aren’t. Tim Hallas shows you how in this Cubase tutorial

Technology offers us a unique approach to making and recording music as it’s no longer necessary to enlist the services of bandmates to fill the roles of drummer, guitarist, bass player and so on, or studio staff to man tape machines and mixing desks. Indeed, a single person equipped with the necessary software and hardware can perform all those roles on their own.

But this ‘solitary’ approach has downsides, too: creating complex arrangements and interaction between instruments is now all down to you alone, and an authentic-sounding performance becomes harder to physically re-create. You won’t, however, fall out with said bandmates over ‘creative differences’…

And on the subject of musical interaction, anyone who has worked in a band will know that one of the hardest skills to develop – and from personal experience one of the last – is the ability to create/perform harmony lines, and vocal harmonies in particular. Even for those of us who are sufficiently blessed to be natural multi-instrumentalists and vocalists, the ability to create harmonies takes no small measure of knowledge and skill – not to mention practice. But if you don’t fall into that camp, don’t despair: Cubase has been equipped for some time with the kinds of tools you’ll need to create convincing harmonies – and in version 7 it’s even easier.

One of the most talked-about new features in Cubase 7 is the Chord Track, and with it the ability to generate harmonies for both MIDI and audio tracks from its chords. Now, Hollin Jones explored its capabilities only a few months ago (Issue 119, February 2013) so I won’t repeat too much of what he wrote, but a quick recap is worthwhile before we move on.

Once you have recorded the audio part you want to harmonise you need to make sure that Cubase ‘knows’ what the chords below should be to enable its under- the-hood algorithms to operate accurately. Start by adding a Chord Track: select Project>Add Track>Chord Track and it will appear in the Arrange window. 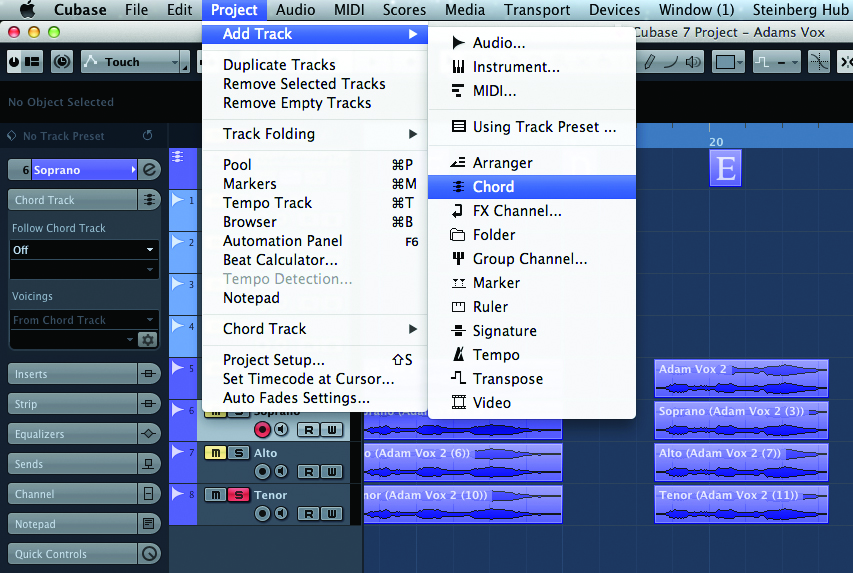 To add chords, select the Pencil tool and draw in chords at the locations you want them, clicking on each again to select the chord that you want. 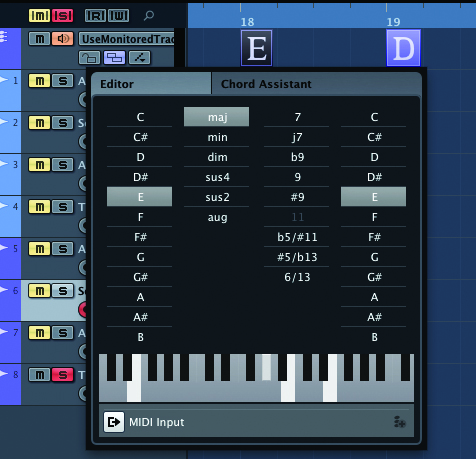 Once the chords are in place you are ready for the clever bit. Select the segment of audio you want to harmonise – if you haven’t trimmed the chunk you want, do so now, either with the Scissors tool or via the blocks at the end of each chunk in the Arrange window.

If you don’t do this now, Cubase will generate harmonies for the entire take (which you may want, but if you don’t, it will take a long time to process and will have to be edited later anyway). Once selected, choose Audio> Generate Harmony Voices; 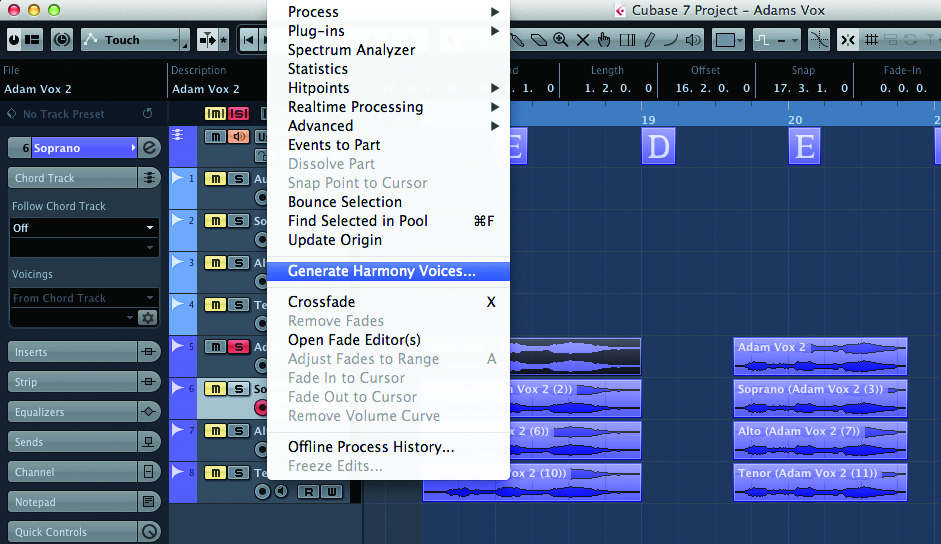 Cubase will ask you how many harmonies you would like and create that number of parts, based on the chords in the Chord Track.

Your newly created harmonies should now be displayed in the Arrange window and, depending on the source material, they should be relatively similar in musical shape to the original part.

However, to my ears at least the parts do sound very processed and auto-tuned, but when mixed appropriately within a track their synthetic qualities aren’t that obvious and you should find that the original line masks any such shortcomings. By default Cubase presents them all at an equal volume, so you may need to balance the volumes of the parts against one another as well as the original to make the whole sound more natural.

The harmonies that Cubase creates are what music theorists would describe as ‘standard’ SATB (Soprano, Alto, Treble, Bass) harmonies, but there might be occasions when you want a very specific harmony line. This might be one that doesn’t follow the chord structure behind it, for example, or jumps between the various standard lines. This is possible in Cubase, but the process is not as straightforward.

Start off in the same way, recording an audio track into the Arrange window and selecting the piece you want to work with. As we saw earlier, shorter sections are easier to work with, in terms of both the required processing power and head space of the operator! 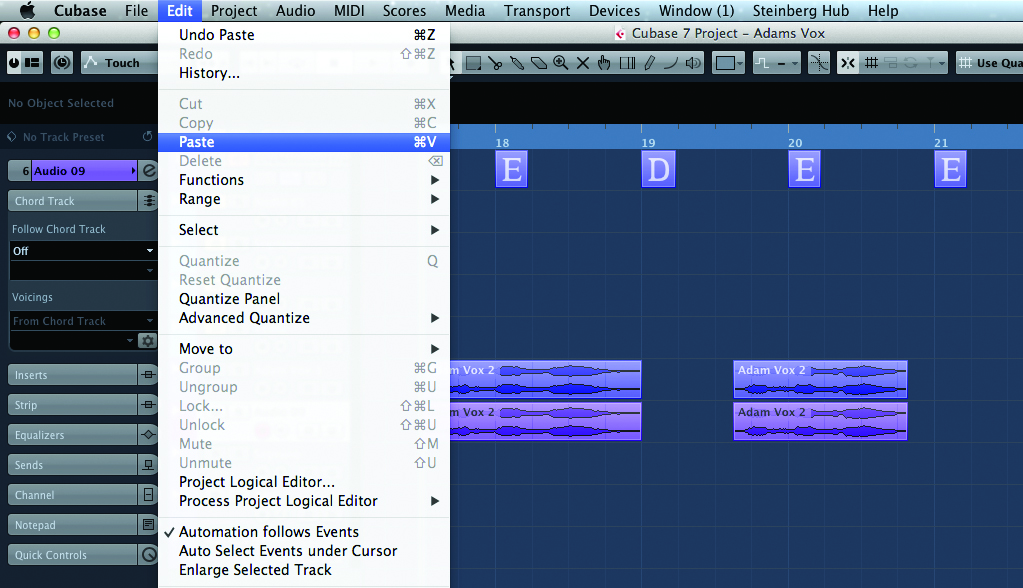 It’s this duplicated part you’ll be working with.

Double-click on the copy to open the Sample Editor and gain access to the advanced audio-editing tools. Click on the Vari-Audio tab to the left of the window and select Pitch & Warp to analyse the pitches within the file. 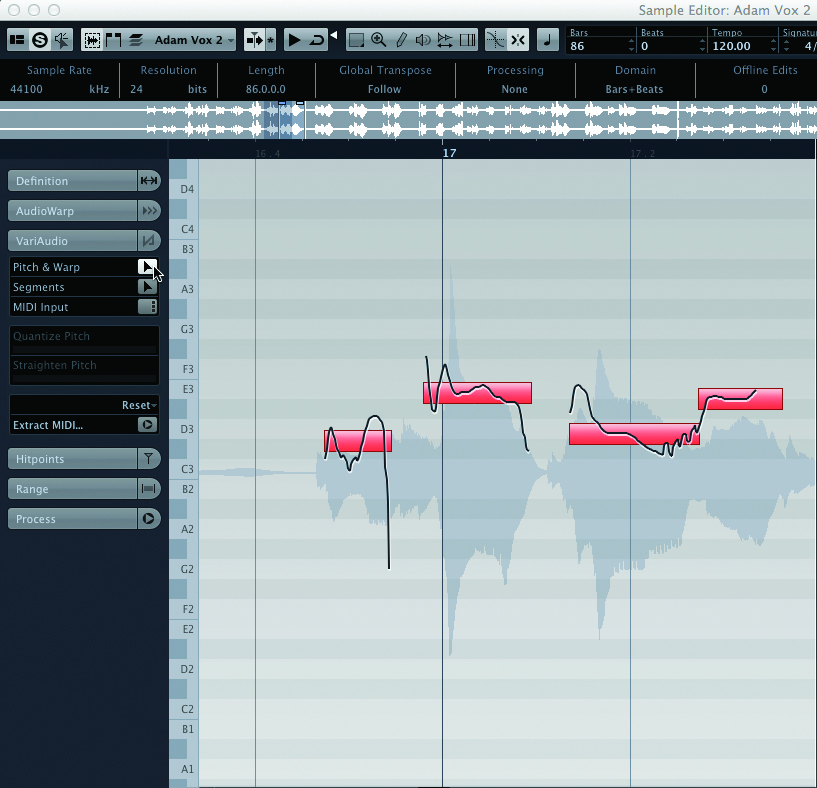 The waveform in the main part of the window will now contain blocks similar to the Piano Roll for MIDI overlaid on the waveform; this is next to a piano keyboard for pitch reference.

Before you move the notes into different positions, select the blocks in the main window and, in the menu to the left, move the Quantise Pitch slider by the desired amount to make the original pitches as accurate as possible. This can also be done individually rather than en masse. 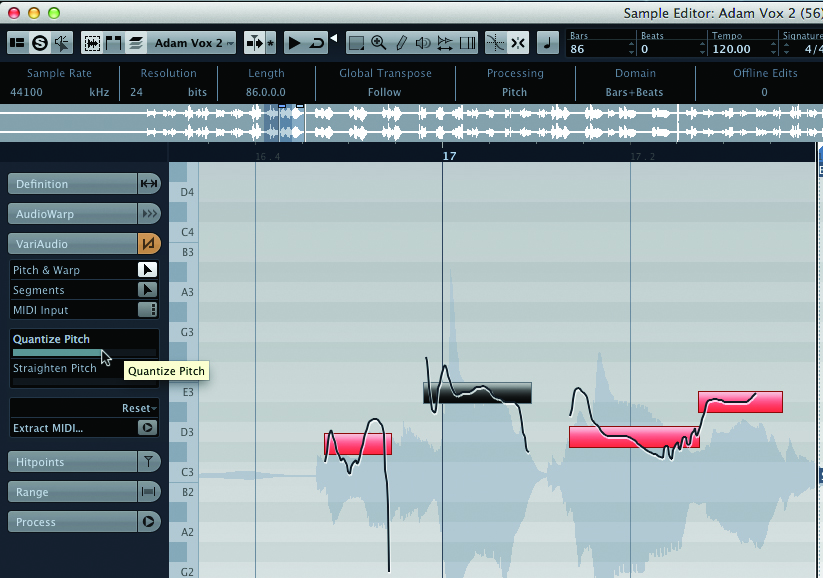 Once the pitches have been quantised, listen to the part to make sure it has been done correctly; if not, use the editing tools to the left to correct individual note lengths and pitches.
Once the part is as you want it you are ready to create your own custom harmonies. To simply get your ear in, start by dragging the notes into a simple pattern of major and minor thirds above and below the original melody based on the chords – this should be pretty easy. Once you have done this, more adventurous harmonies can be created. If you can hear a particular line in your head, move the blocks to match it.

Going beyond using audio alone for generating harmonies, let’s turn our attention to using MIDI as a source. Arguably the most obvious target for this technique is vocals, but it can work just as well with other instruments – they have to be monophonic, but it’s a handy technique to know if you need to create a string section and have only one violin (or any other instrument, for that matter). Rather than copying the tracks and editing them you can add some software instruments and create harmonies using these.

Start by opening the Sample Editor displaying your original audio and analyse it as before. Once that’s done, click on Extract MIDI; 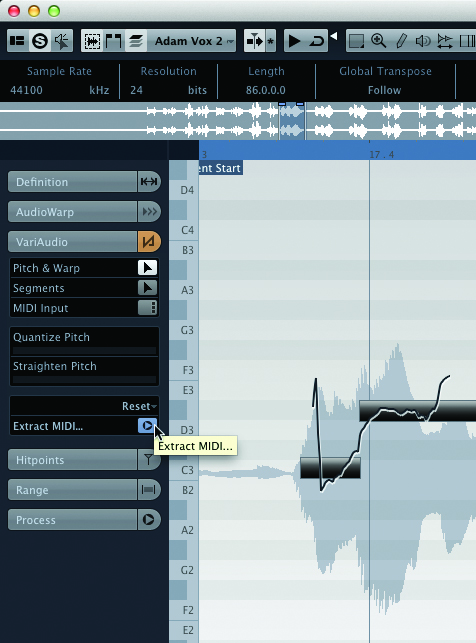 select Paste to New Track in the resulting pop-up window

A new MIDI track will be created in the Arrange window which you can then link to a software instrument, either via VST Instruments or by copying the MIDI file to an Instrument track. 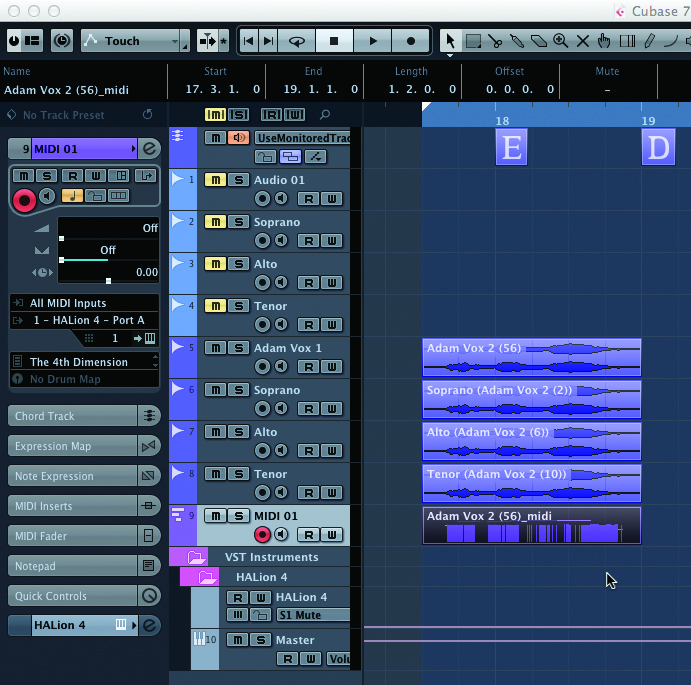 The resulting note data can then be edited into harmonies either musically or by following the Chord Track. The advantage of this approach is that the data, being MIDI, can be moved around without unwanted audio characteristics appearing; it can also be copied multiple times. Again, as is the case when working with audio, although the sound won’t be quite the same as the original, it can, with appropriate mixing techniques, be blended into the track seamlessly. I have used this technique of mixed audio/virtual instruments many times for professional work and it sounds fine.

Perfect Harmony
Now you have an insight into the various ways of generating harmonies within Cubase, I encourage you to head off and develop a range of parts within your music. Although the parts often sound quite artificial in isolation, in context they work well and can really give a track a lift. And while getting the results to sound good takes almost as much work as recording the track itself, it does mean that your computer does the hard work rather than you having to teach your musicians all the various parts. So, let’s go harmonise…

FOR THE COMPLETE TUTORIAL, PICK UP OR DOWNLOAD ISSUE 124 OF MUSICTECH MAGAZINE, ON SALE NOW!