In the previous parts of this tutorial series, we’ve looked at crafting a basic demo using your instrument and also captured a perfect vocal take. Now we’re going to take your rough click track and make it into a beat to be reckoned with. Andy Price sets the pace… So, our simple track that we’ve […] 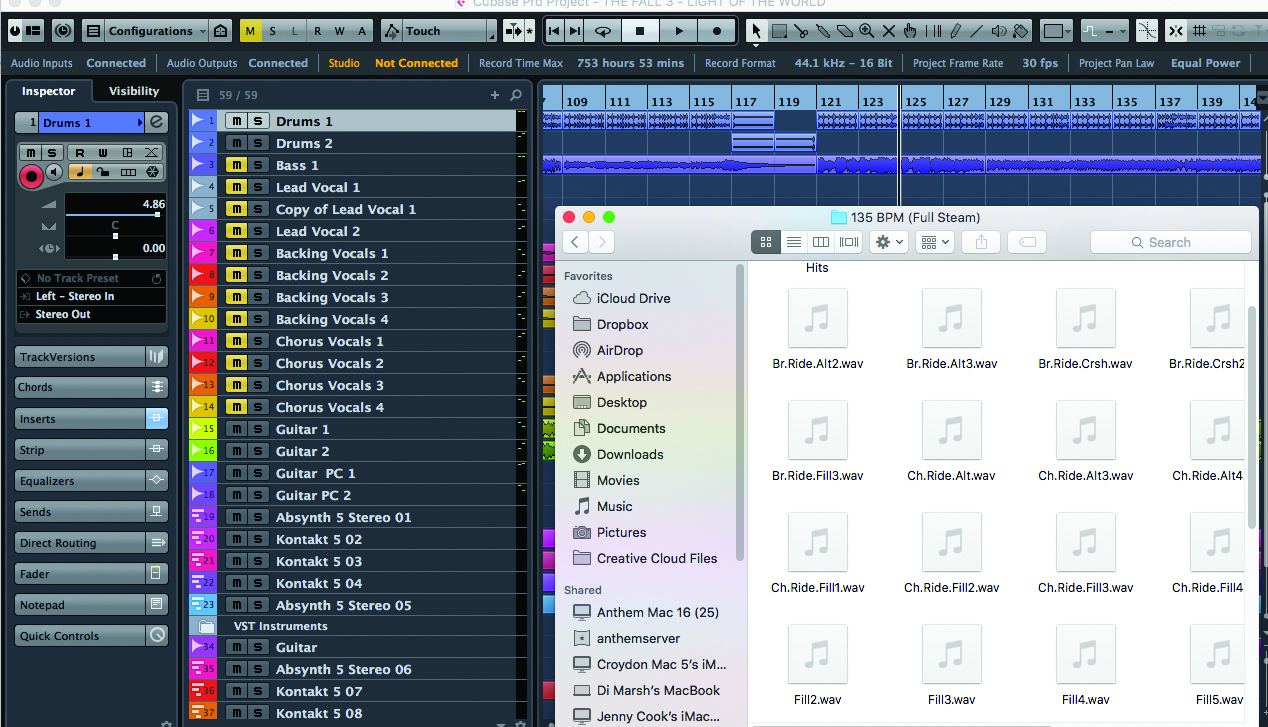 In the previous parts of this tutorial series, we’ve looked at crafting a basic demo using your instrument and also captured a perfect vocal take. Now we’re going to take your rough click track and make it into a beat to be reckoned with. Andy Price sets the pace…

So, our simple track that we’ve been recording has been bolstered by a nicely produced, meticulously sculpted vocal, but before we add extra instrumentation, fine-tune and mix, we need to take a look at the song’s rhythm. In this tutorial, we’re going to build a decent rhythm section around your track’s simple click completely ‘in the box’, to make it sound more powerful and complete.

There are so many different ways of producing drums these days, from straightforward digital emulation tools such as Logic Pro X’s Drummer, to live drum recording and sampling, to building your own patchwork rhythm section from collected sounds.

Ideally, your drum sound should be one of the earliest considerations you make creatively when writing your song. Even if you don’t start sculpting the sound of your beats straight away (though that’s one way to start), when putting together the rhythm of your song, you should have an idea how you envision the end result to sound.

In a previous tutorial, we looked at the importance of rhythm in a songwriting context. Back then, we said that a song’s rhythm can be thought of as the glue that holds the song together and that the entire song-building process should be tethered to a time signature and basic rhythm structure as soon as possible. When I began writing music, I’d record ideas to tape without any rhythmic context (save for my foot tapping).

These days, I can’t commit anything to a recording without at least a basic click. This way, I can start to record the finished track pretty much straight away by recording to something on my mobile device, or iPad in my case, begin mixing and later export the worked-on files to software that will work in tandem with them.

In Logic’s case, there’s GarageBand; however, as I primarily use Cubase, then I tend to record to Cubasis. Cubasis enables the user to record quickly and efficiently direct to their tablet. It also includes inter-app audio support, so if you have another beat-making application, you can directly interface that to Cubasis.

This is most effective for creating ideas on the move, before exporting to Cubase later in the day to really go to town with tweaking and modifying a basic mix.

Little Drummer Boy
Boiling your rhythm down to its basic components, we have the song’s time signature, pulse and tempo. The tempo is measured in BPM, with 120BPM being pretty much regarded as the standard ‘default’ tempo, and a good starting point. Slower tracks normally have time signatures around the 60 to 110BPM mark.

The time signature relates to the pattern of your drums, with 4/4 being the default. 4/4 refers to both the number of beats in our bars and the note value of each beat. The pulse indicates the core heartbeat of your song; most commonly, its purpose is served by the bass drum (or bass-drum substitute). A beat can be accented by the drum – rock music normally accents the 2nd and 4th beat, while an EDM track will accent every single beat in the bar.

There are other considerations, too, when adding beats to your track. For example, if you’ve already recorded a rough version of your vocals, then you may have to re-record them after you’ve constructed

your beat, as their impact and performance may be compromised by elements of a kinetic and powerful beat. On a similar theme, we don’t want to have a beat that dominates or competes with other elements in the mix: in the past, I’ve created demos with basic, stripped-down patterns, added live expressive drums and ultimately found the end result to be too cacophonous. It’s very important to get a drum sound that complements and adds to your song, rather than takes over and overwhelms it. 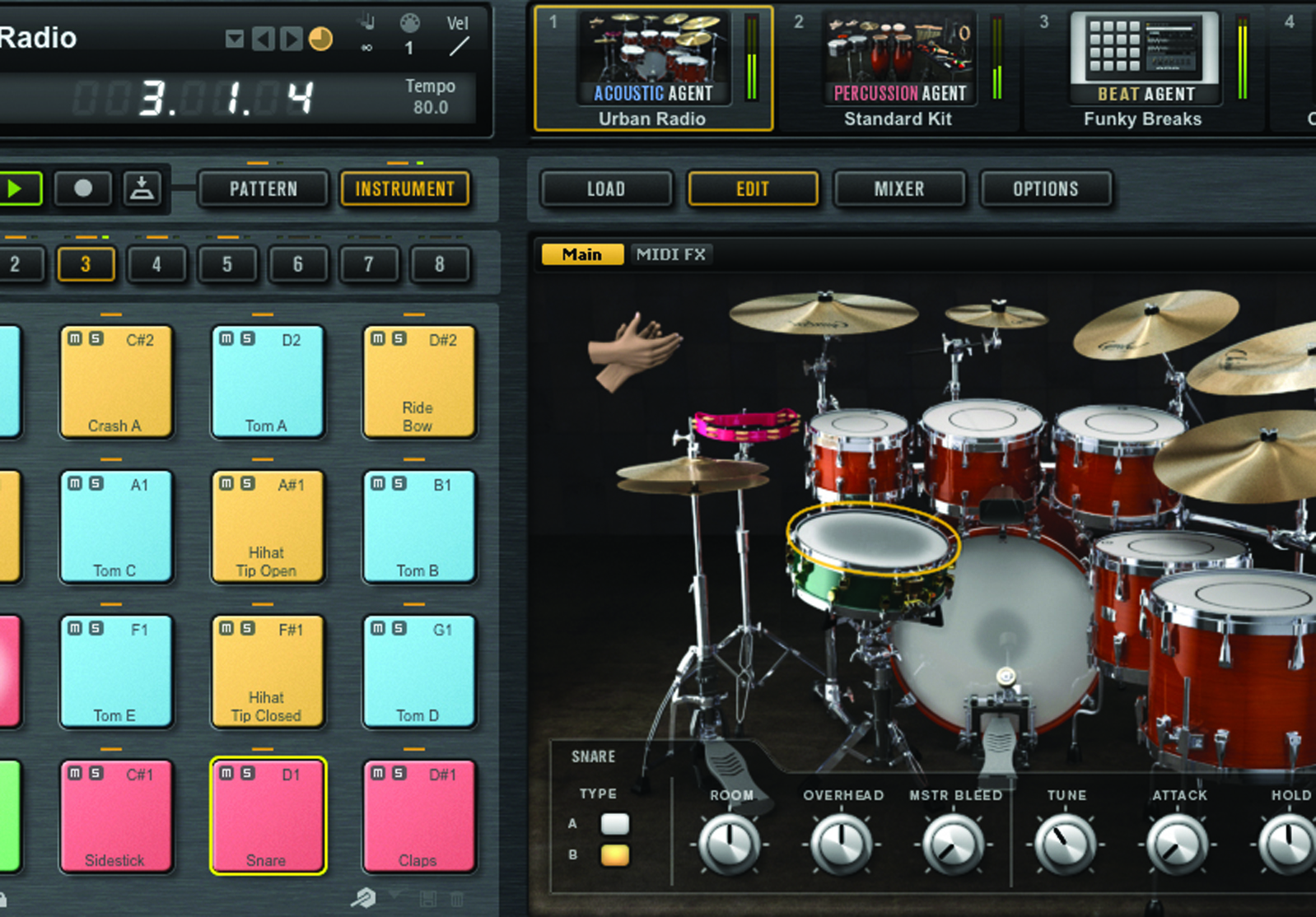 If You Build It…
My musical hub is Cubase, and therefore most of my beat building takes place there using the incredibly flexible Groove Agent 4. Beat building within this incredibly well-structured piece of software is a breeze, thanks to its colossal 22,000-strong sample library and several thousand variations of groove, with the ability to import your own sounds an additional bonus.

It’s also a great tool for starting out ideas. Using the modifiable Jam mode, you can get instrumental and creative inspiration from spontaneous backing tracks. This is great for getting going with new ideas if you’re struggling to get the creative juices flowing, as frequently happens to the best of us.

However, creating beats in Groove Agent 4 is perhaps where the most fun is to be had. With simple-to-use tools, you can easily craft your own personalised drum sounds and create beats. Using the Acoustic Agent feature, you can concoct grooves assigned to a variety of genres (all tonally sculptable) and it intelligently reacts to your existing track, which is a brilliant way to refine the perfect sounds.

The Beat Agent also offers you a similar level of control, but in the context of electronic and urban music, it differs from Acoustic Agent in that you can add your own specific samples, loops and sounds and splice together your own unique-sounding beats. Groove Agent 4’s other main beat-creation tool is the Percussion Agent.

This can work in tandem with Acoustic and Beat Agent to modify your existing beat and add new elements, or completely build your own sounds (without any genre presets) from scratch. It includes high-quality recordings of over 20 percussion instruments, including congas, tambourines and bongos, so you can pretty much start making music completely from here, building a rhythmic underbelly before you add music and melody.

Back to Basics
Groove Agent 4, then, for my money, is the way to go for digital beat making. It’s just one option for creating beats entirely inside your DAW, without the need to resort to external hardware, and Cubase comes with a ‘lite’ SE version as standard.

Focus On… Loops
Although there’s so much external software out there to help you in your beat-making journey, what I find sometimes quite fun is by manually adding loop sounds directly to Cubase, having amassed quite a large wav archive of drum loops (or sounds I think would work in a percussive context). 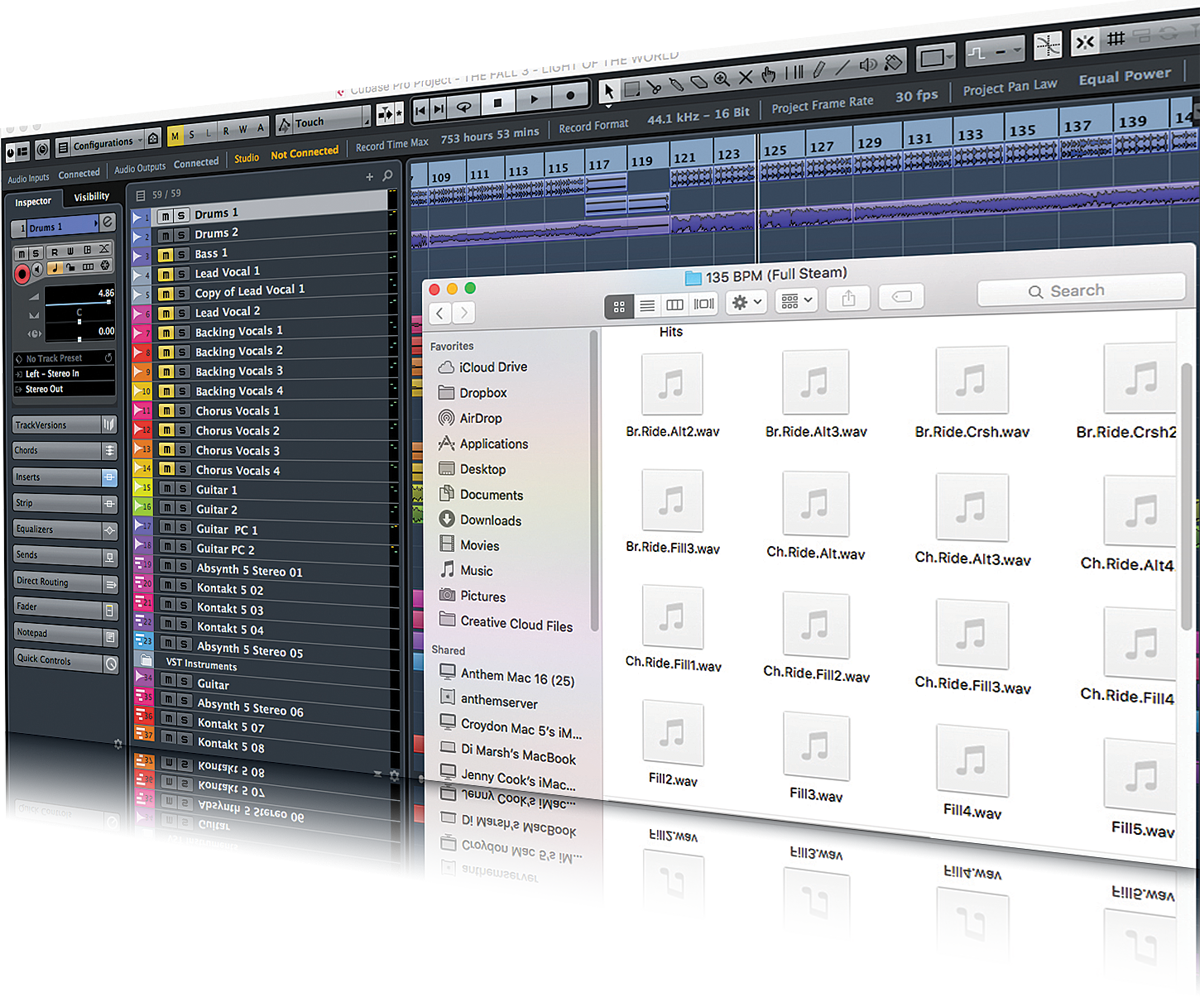 It’s cool to add them manually to a track in your mix and then play with the compression/delay and other track effects directly on your looped sounds. There are thousands of sample packs out there and indeed, we’ve given away a fair few on our cover disc. It’s more basic, DIY and clunky this way, but sometimes the end result can sound a much more intriguing and original. 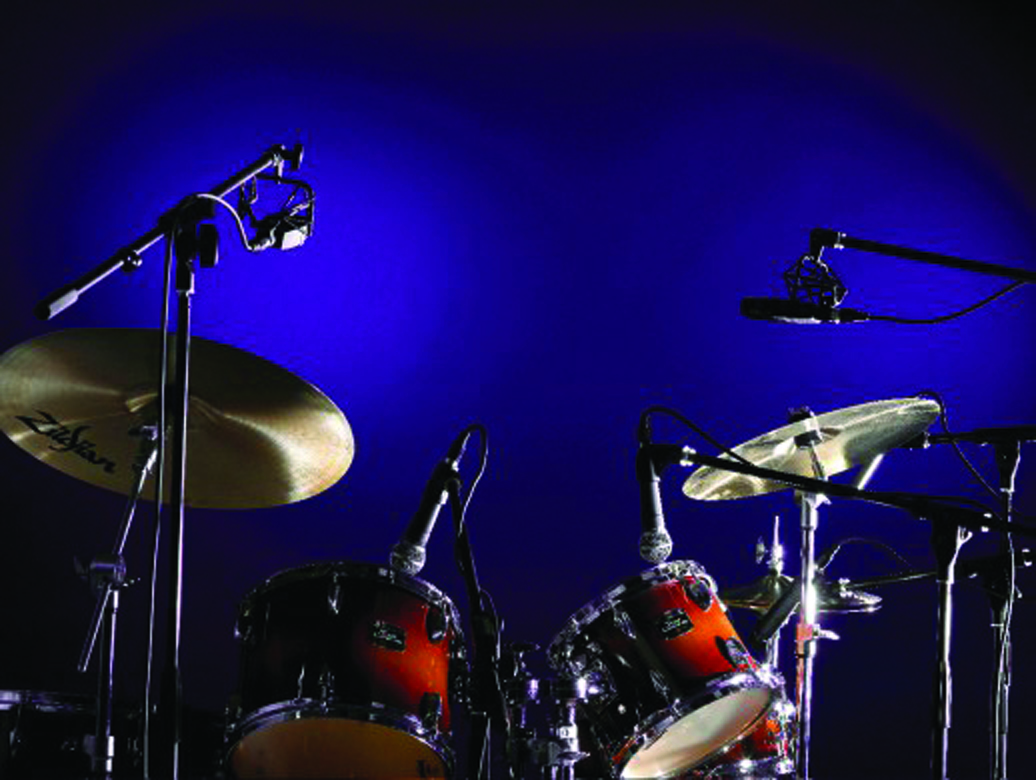 1: Crafting beats yourself in Cubase can be fiddly, but you can listen back to that purpose-built rhythm section with pride. Recording live drum sounds can be time-consuming, and is covered in-depth on musictech.net. Here, I’m using drum sounds I recorded earlier. 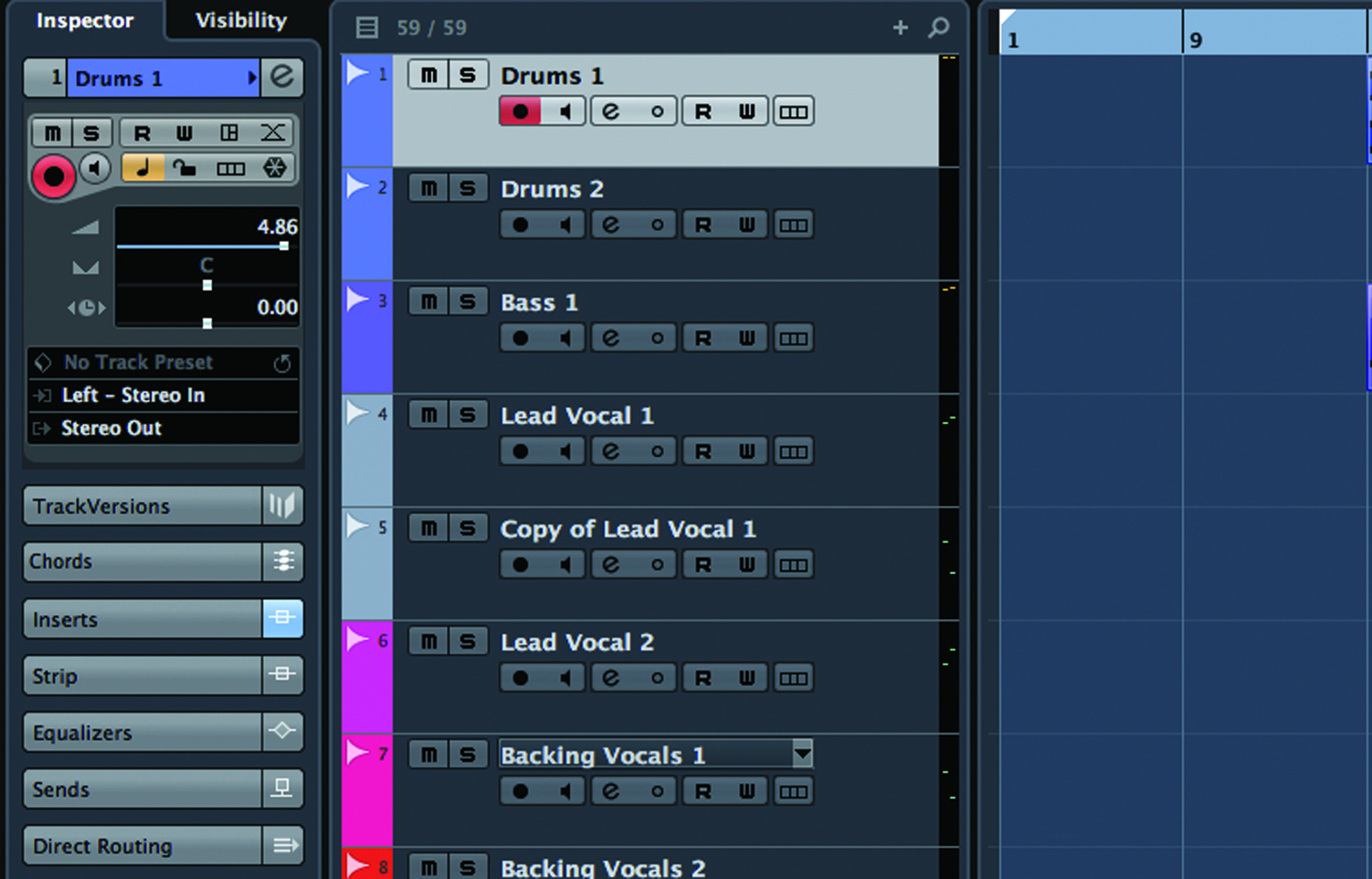 2: If you’ve recorded each element of the kit separately (for maximum flexibility), you’ll need a track in Cubase for each element. I’ve recorded the kit as one sound. I’m happy with two drum tracks: one master rhythm track and another to add fills and changes. 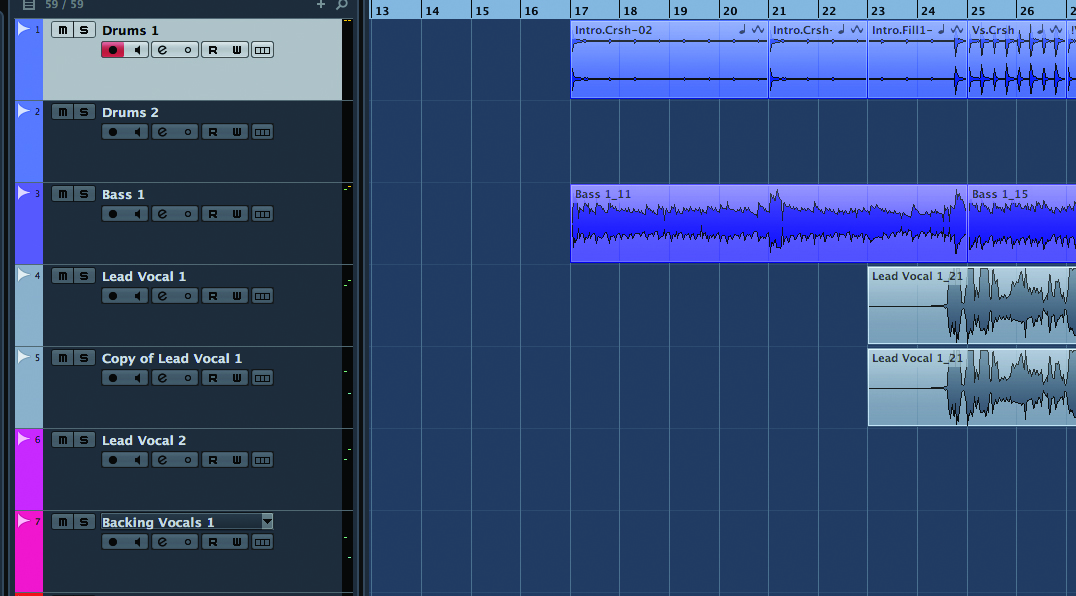 3: This particular song has a driving beat, so I’ve recorded quite a simple 120BPM rhythm performed quite intensely, a variety of fills and a few sudden ‘stops’ with hi-hats. Filling in the song with elements of the recorded beat can be a very fun, creative exercise. 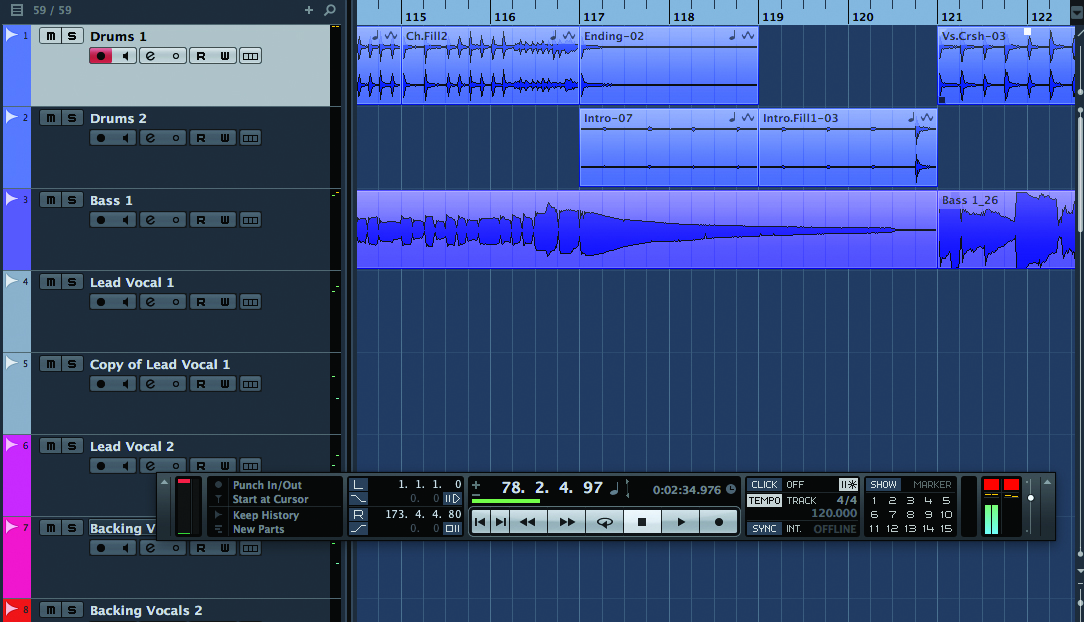 4: During the chorus, the original beat is slightly modified, with a few more fills interspersed. I wanted to add additional drum parts, which sneak into the mix unexpectedly. Here’s where drum track 2 is handy, especially during the pause at the end of the chorus. 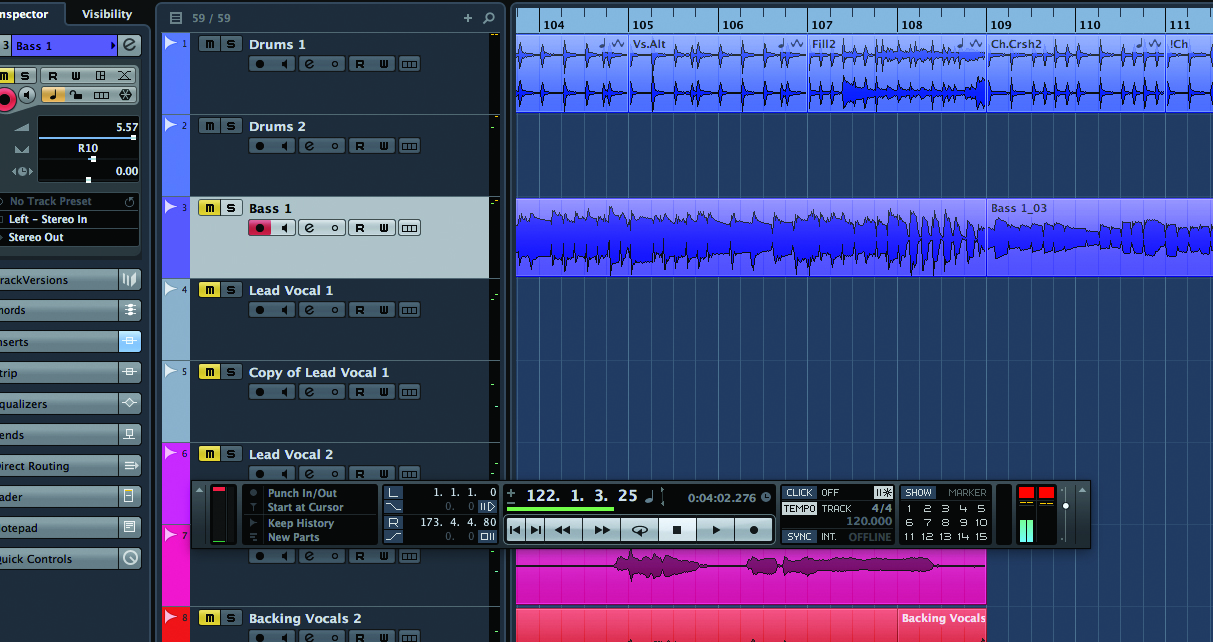 5: Keep in mind your song’s overall dynamic structure when you’re crafting the shape of your drum tracks in this way. Ensure intense beats don’t compete with the vocals. Your bass line should be re-recorded after completing drum tracks, so it accentuates the pulse. 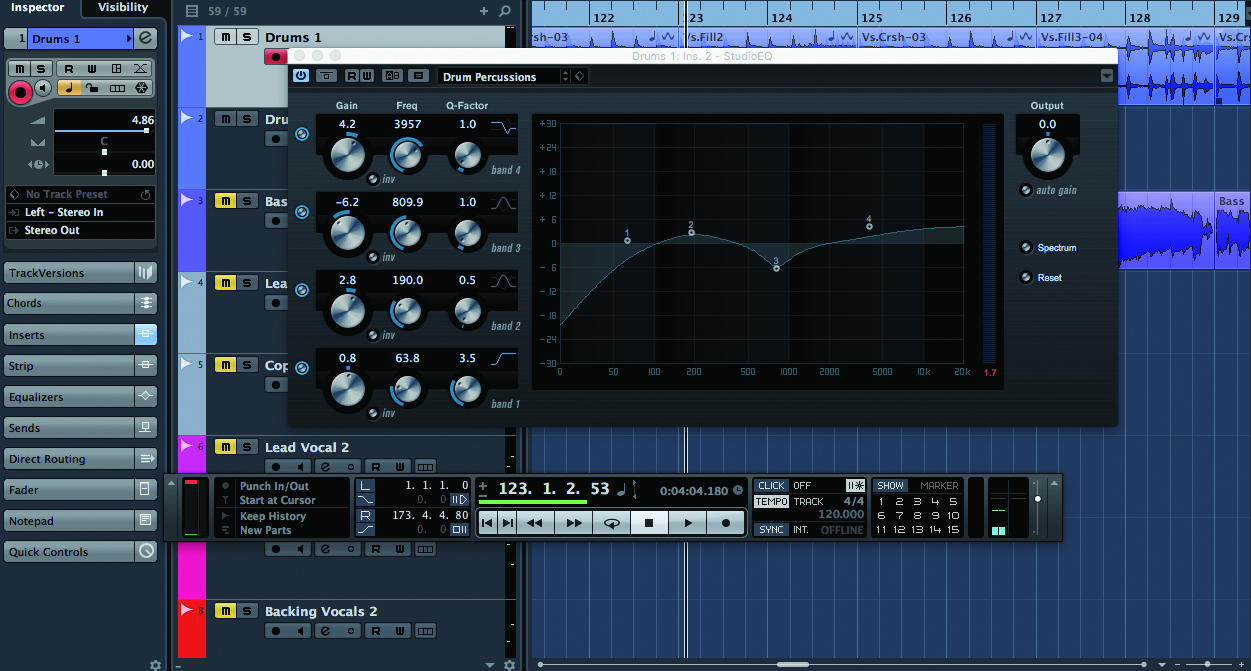 6: Once your drum track is in place, you may want to tidy up and re-shape other areas of your mix to fit. Getting your drums to sound ‘right’ in the context of your song may require additional tweaking of their EQ. Cubase’s Studio EQ is particularly useful here.