A very appealing aspect of any modern DAW is its built-in ‘ready-made’ music-creation tools – and Cubase has them in spades. Tim Hallas digs in… Today’s age of instant-reward music-making in which users need only to click one or two buttons or swipe a touchscreen to create music makes the traditional DAW seem a little […] 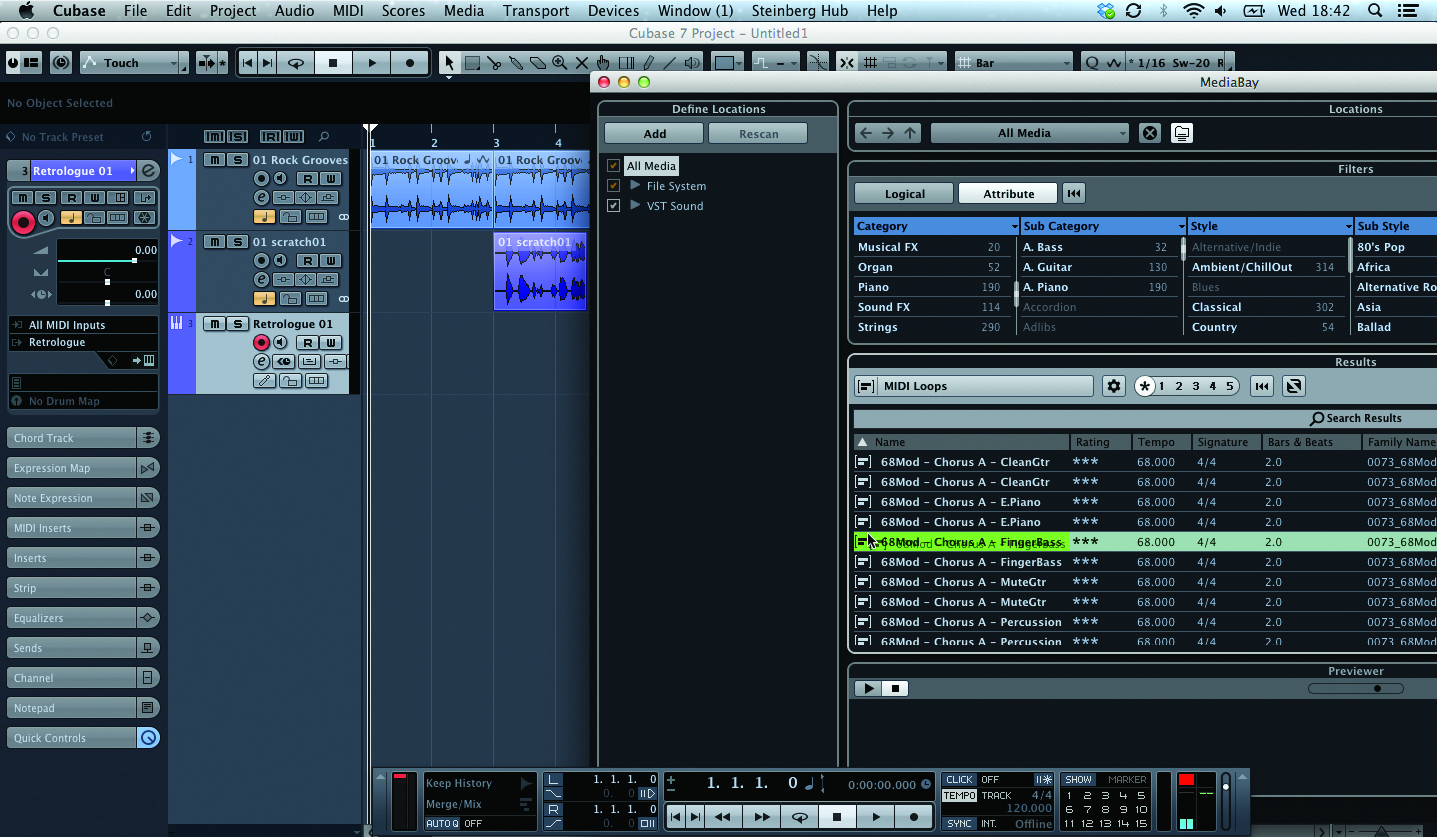 A very appealing aspect of any modern DAW is its built-in ‘ready-made’ music-creation tools – and Cubase has them in spades. Tim Hallas digs in…

Today’s age of instant-reward music-making in which users need only to click one or two buttons or swipe a touchscreen to create music makes the traditional DAW seem a little outdated or too ‘high-end’ for a lot of people. Indeed, it could be argued that drag-and-drop software environments and loop-assembly programs result in everything ending up sounding identical – and that could be seen as a problem. Proving that point, I have recently heard GarageBand loops featuring in one of chef Heston Blumenthal’s television programmes as well as in an advert for a well-known car manufacturer…

This obsession with loops and ‘basic’ music creation is a real problem for software manufacturers who want to market higher-end and professional software but simultaneously want to entice converts from lower-end software.

Interestingly, Steinberg has managed to do this quite well – albeit relatively late in the game – with the introduction of loops in its Cubasis iPad app, enabling you to record audio and play instruments in much the same way as GarageBand does. In my opinion, the quality of the sounds in Cubasis for iPad is much better than in GarageBand, even if the user interface is not quite as straightforward.

Returning to the ‘traditional computer’ front, Steinberg also joined the party with more entry-level software – that still relatively unknown application Sequel. This is a direct GarageBand competitor; however, it runs on both PCs and Macs, making its potential market share much higher (although that has sadly yet to be realised). In my other life as an ‘educator’ I wholeheartedly recommend Sequel to many schools as an excellent entry-level piece of software for their younger students, who can then progress to Cubase as they become more competent.

This brings us back to the point about how a traditional DAW such as Cubase can compete in a marketplace of easy-to-use, instant-gratification music-creation software. Fortunately, Steinberg (and other DAW developers, of course) has worked on this problem and tried to make the transition more gentle by making the main window easier to navigate, making projects from its entry-level software capable of being imported, and by including loops and track presets.

These loops and track presets in Cubase are reasonably well-hidden by comparison to other software, but they are there and many of them are eminently usable, plus they haven’t already appeared in every other track around! They can be found in MediaBay, the hub for sounds and track templates in Cubase. Let’s take a look… 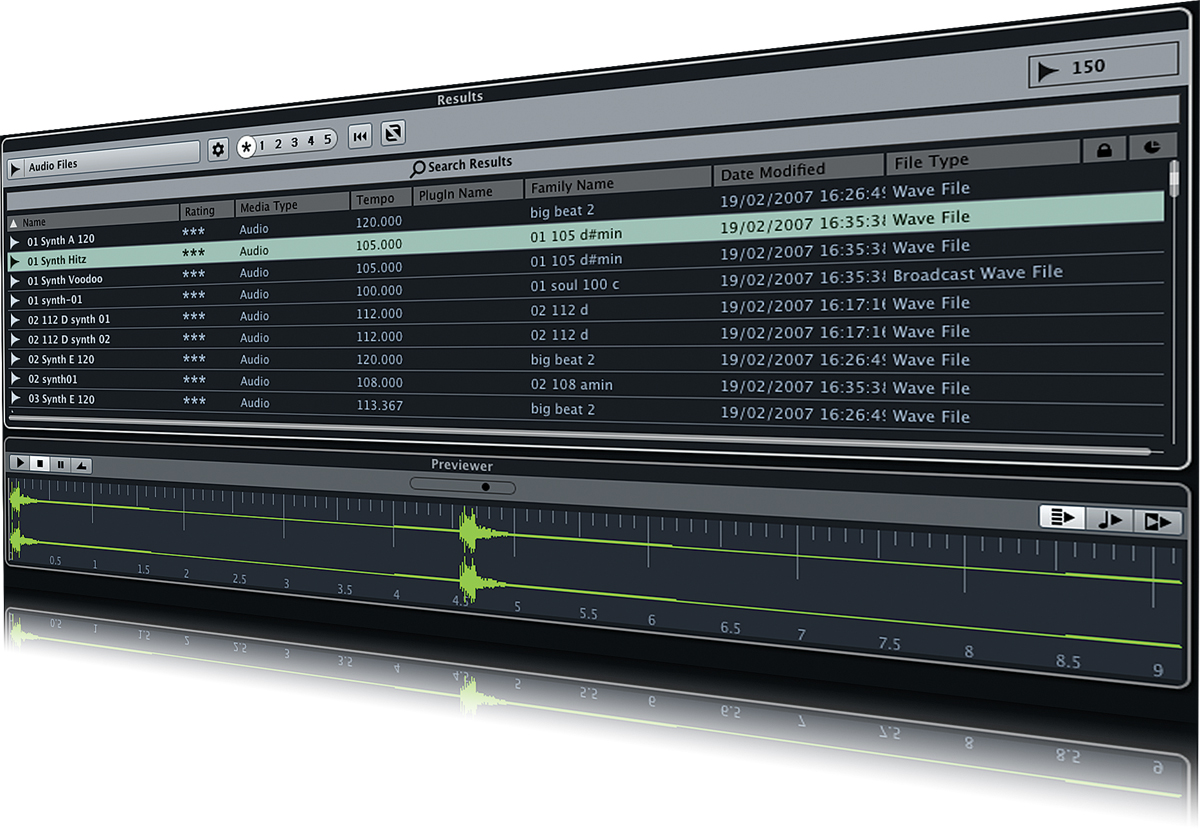 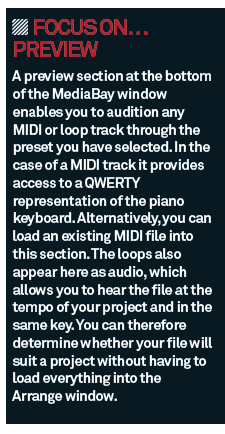 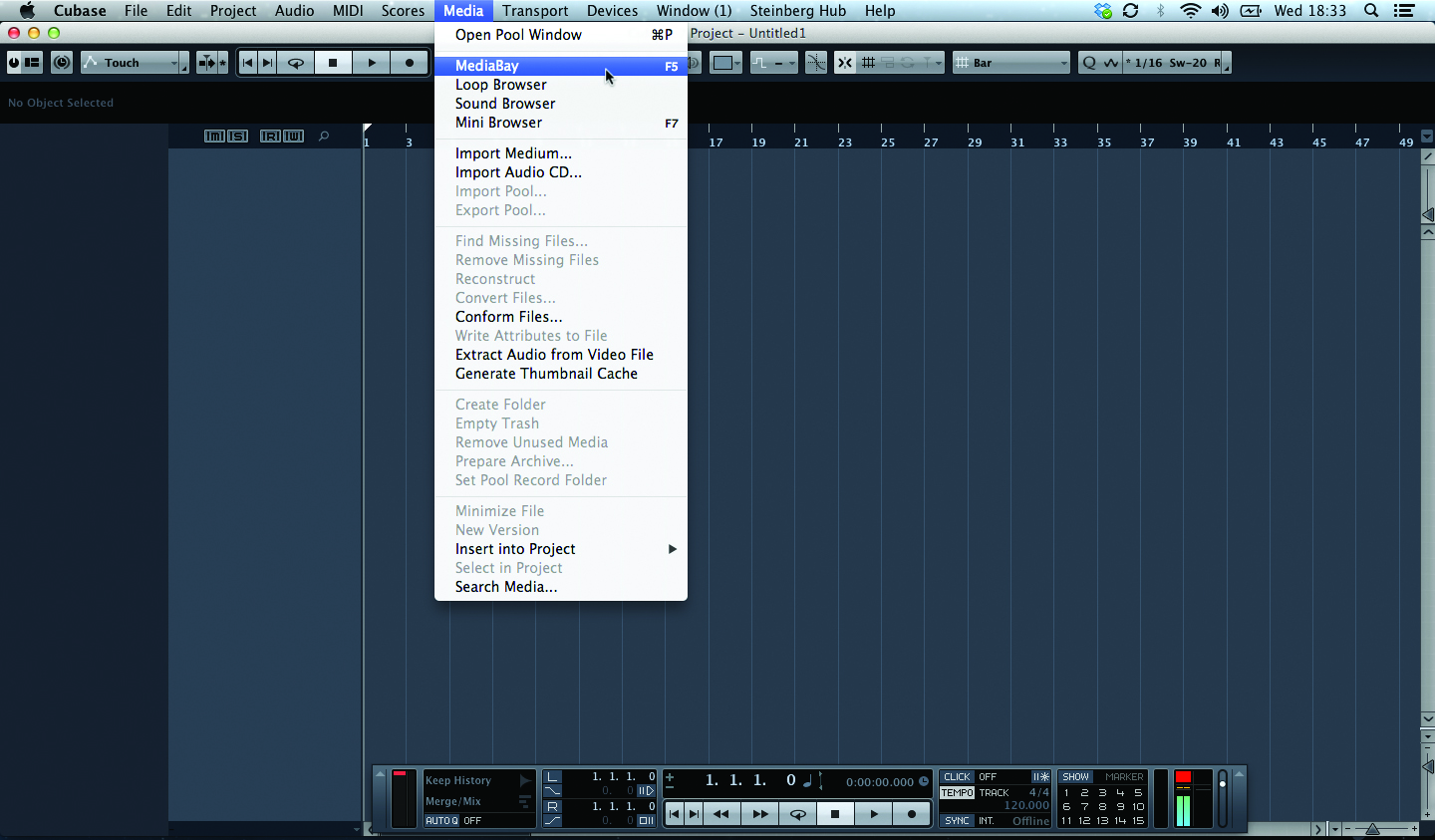 1: To open the MediaBay select Media>MediaBay or press [F5]. A dialog box containing all of the different media available (including audio and MIDI loops as well as track presets for both software instruments and audio recordings) will appear. Audio loops are depicted by an icon of a single waveform; MIDI loops have an icon depicting two piano-roll notes. 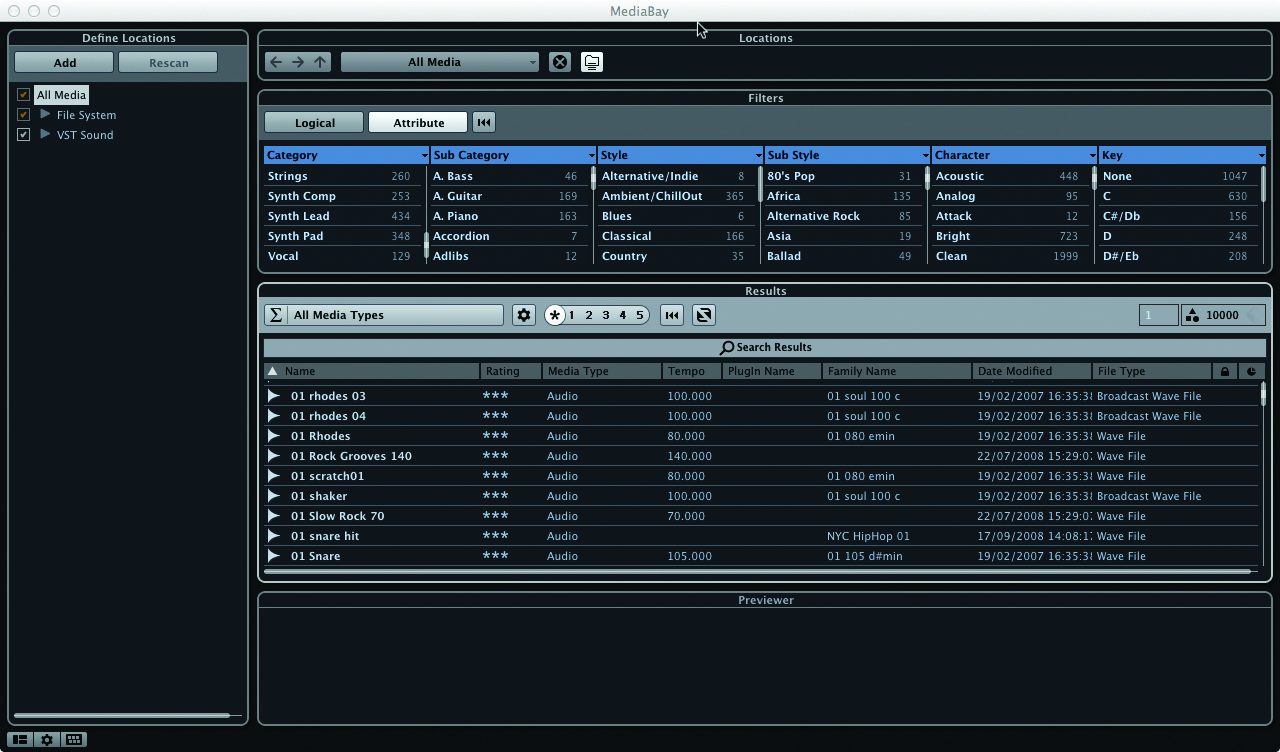 2: Once MediaBay is open you need to use some of the ID Tag filters to identify the sound you want. The filters appear as the second box down within the window. These are sorted via instrument and then genre. Simply select the instrument and style that you want and Cubase will filter down the results. The presets will appear in the third section of the window. 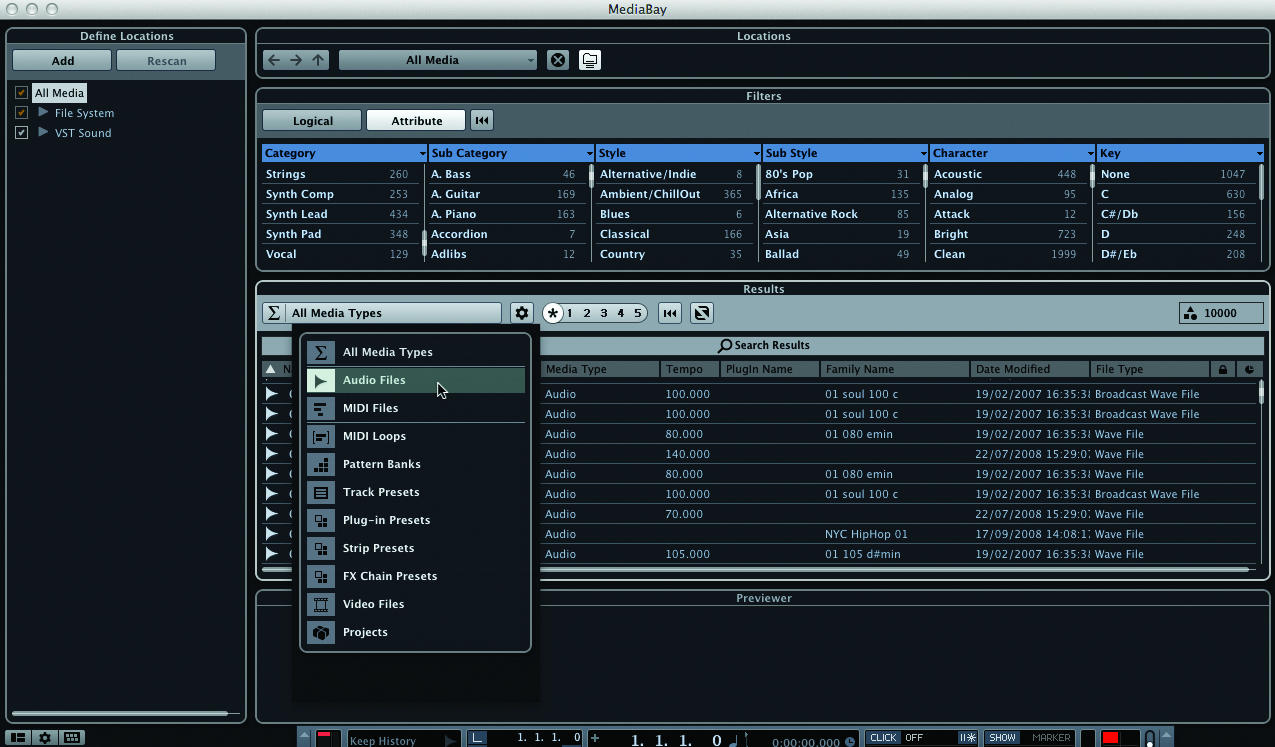 3: Once a style and instrument have been chosen you need to filter down to show only the loops and remove the options of track presets. At the top of the third section in MediaBay there is a dropdown box that will probably be defaulted to All Media. Click on the box and select either Audio Files or MIDI Loops. Cubase will filter down again to the chosen file format. 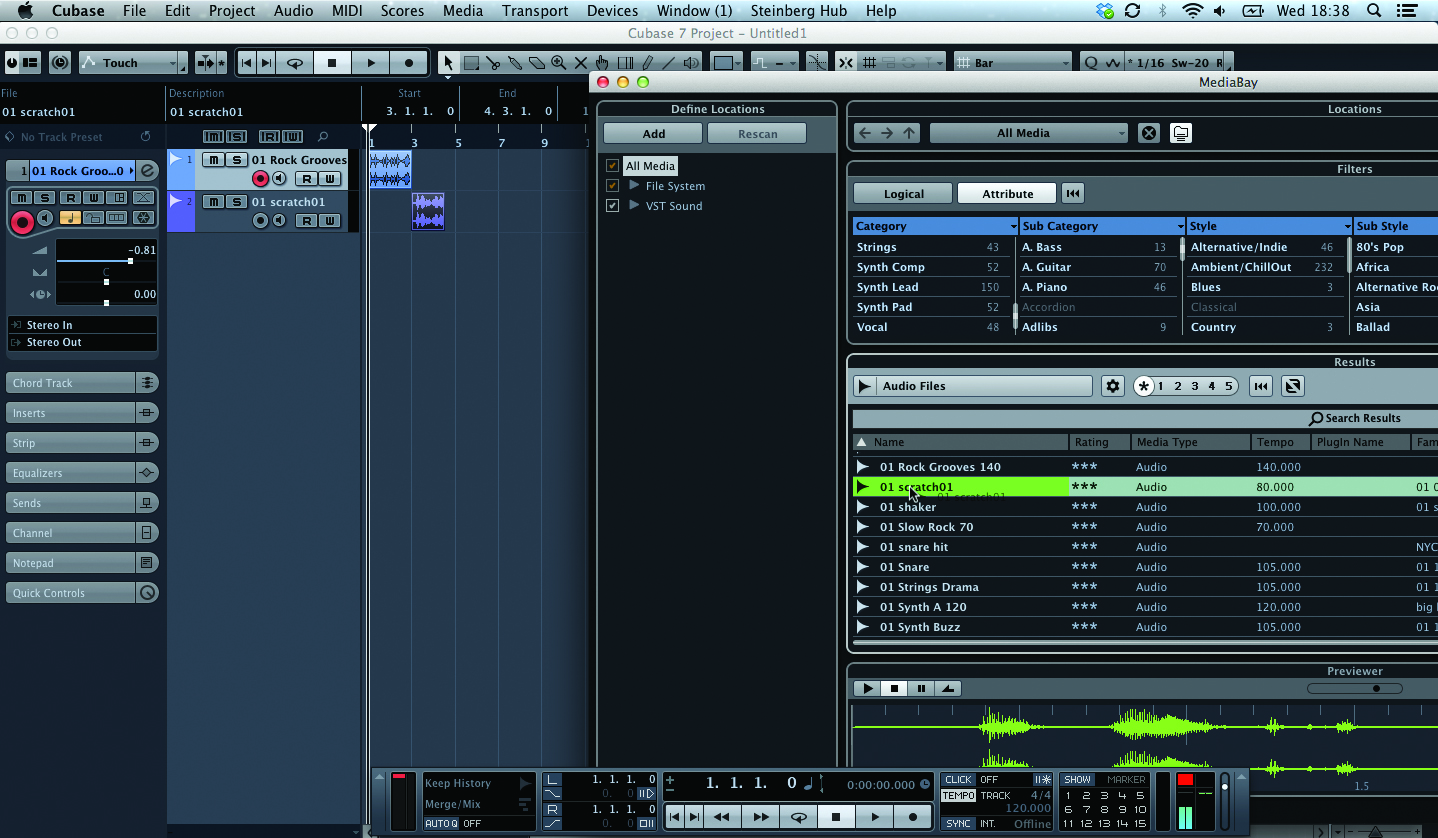 4: To add a selected audio loop to the project, either drag-and-drop from the MediaBay window or simply double-click the chosen loop. Cubase will create a new track in the Arrange window and place it at the start of the track. Using drag-and-drop you can, of course, place loops onto existing tracks and at different positions within the project. 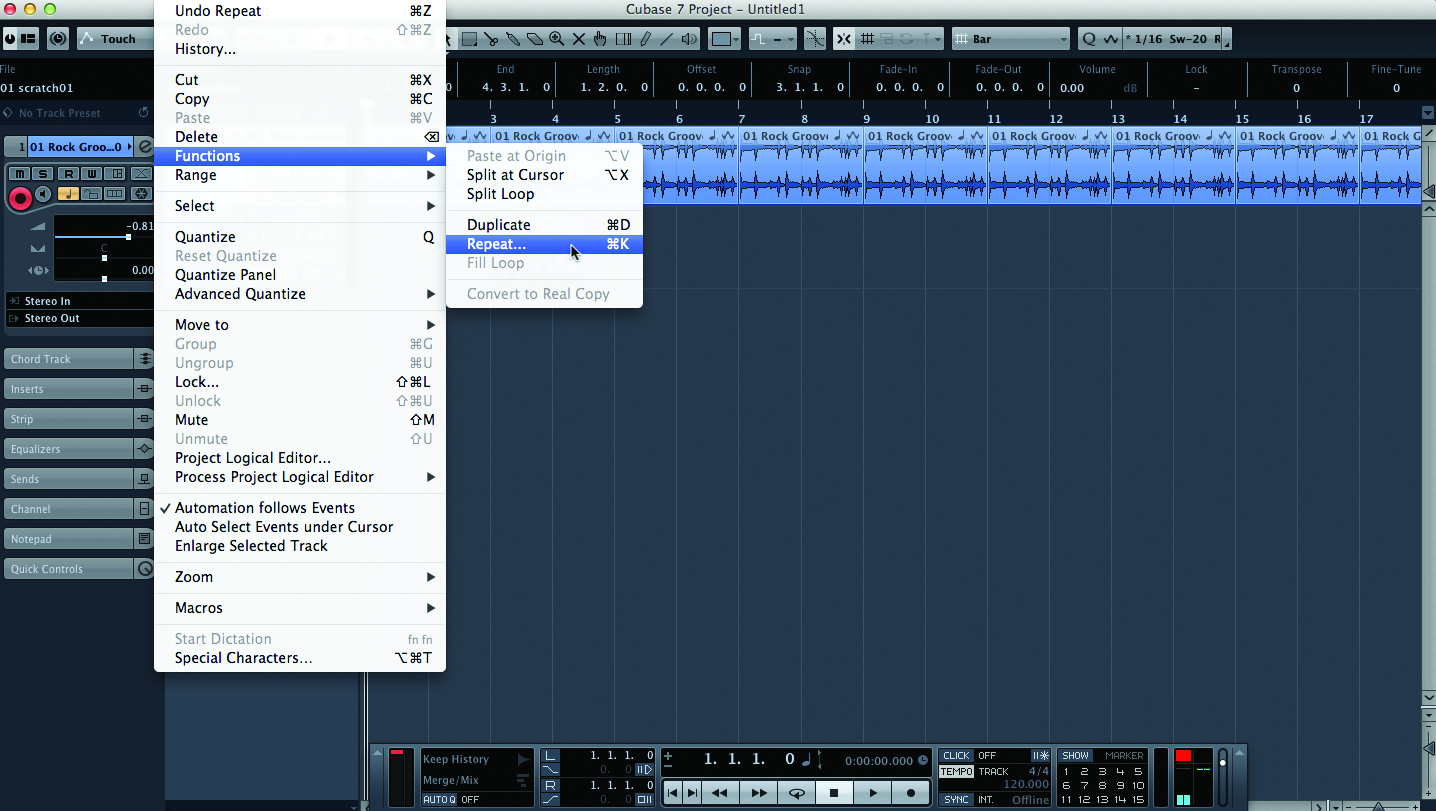 5: To loop this track within the Arrange window, select the section you want to repeat and click on Edit>Functions>Duplicate ([Ctrl]/[Cmd]+[D]) for a single repeat or Edit>Functions>Repeat ([Ctrl]/[Cmd]+[K]) for multiple copies. Unlike copies in other software, these are complete copies and can be treated as any other audio file and can be moved, edited and manipulated separate from the master loop.

6: Unlike audio files, MIDI loops need to be loaded into an existing MIDI or software instrument track. They simply store the MIDI information and it is then up to you to specify the instrument they are assigned to. Obviously, there are recommendations within the ID Tag based on pitch and rhythmic characteristics – a drumbeat will sound odd on a piano, so see what Cubase suggests as a suitable instrument. 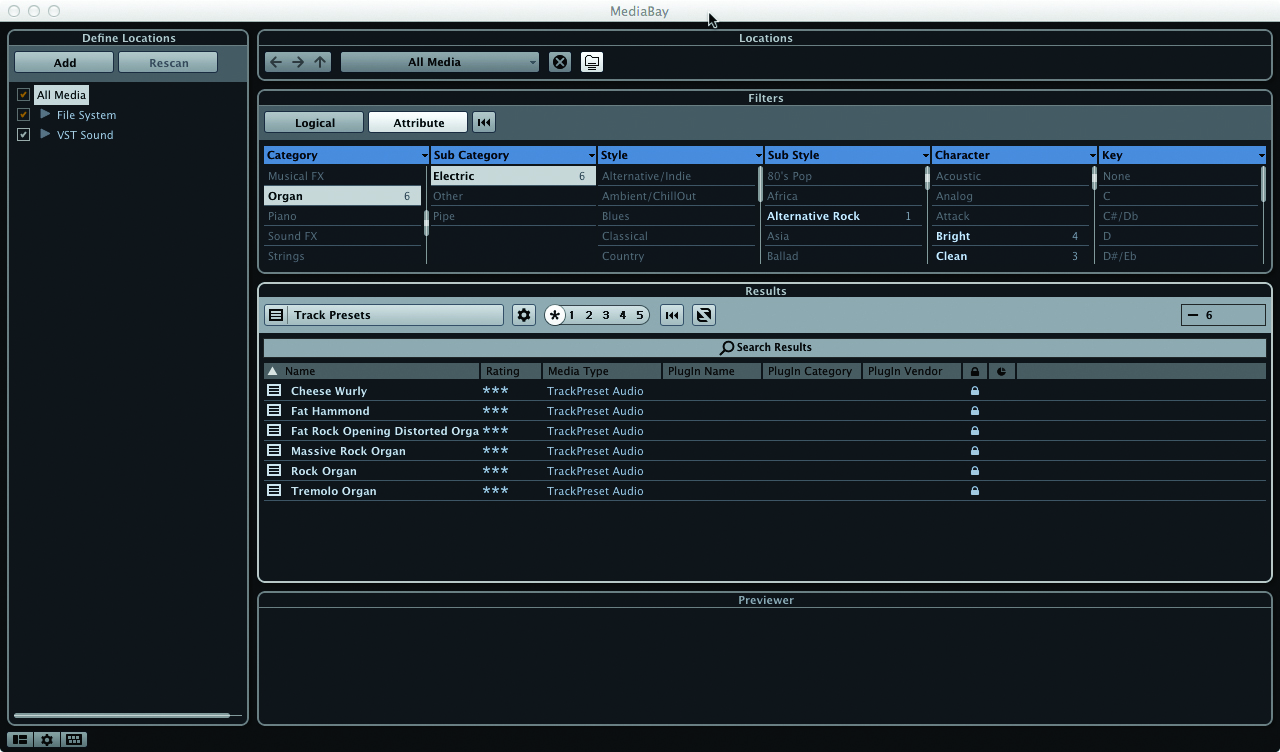 1: To find the track presets in MediaBay follow the first three steps of the previous walkthrough, but instead of selecting Audio Files or MIDI loops, select Track Presets. A track preset is illustrated by a rectangle with three lines to represent plug-ins and so on that it has stored within it. When chosen, double-click on it and Cubase will load it into the Arrange window. 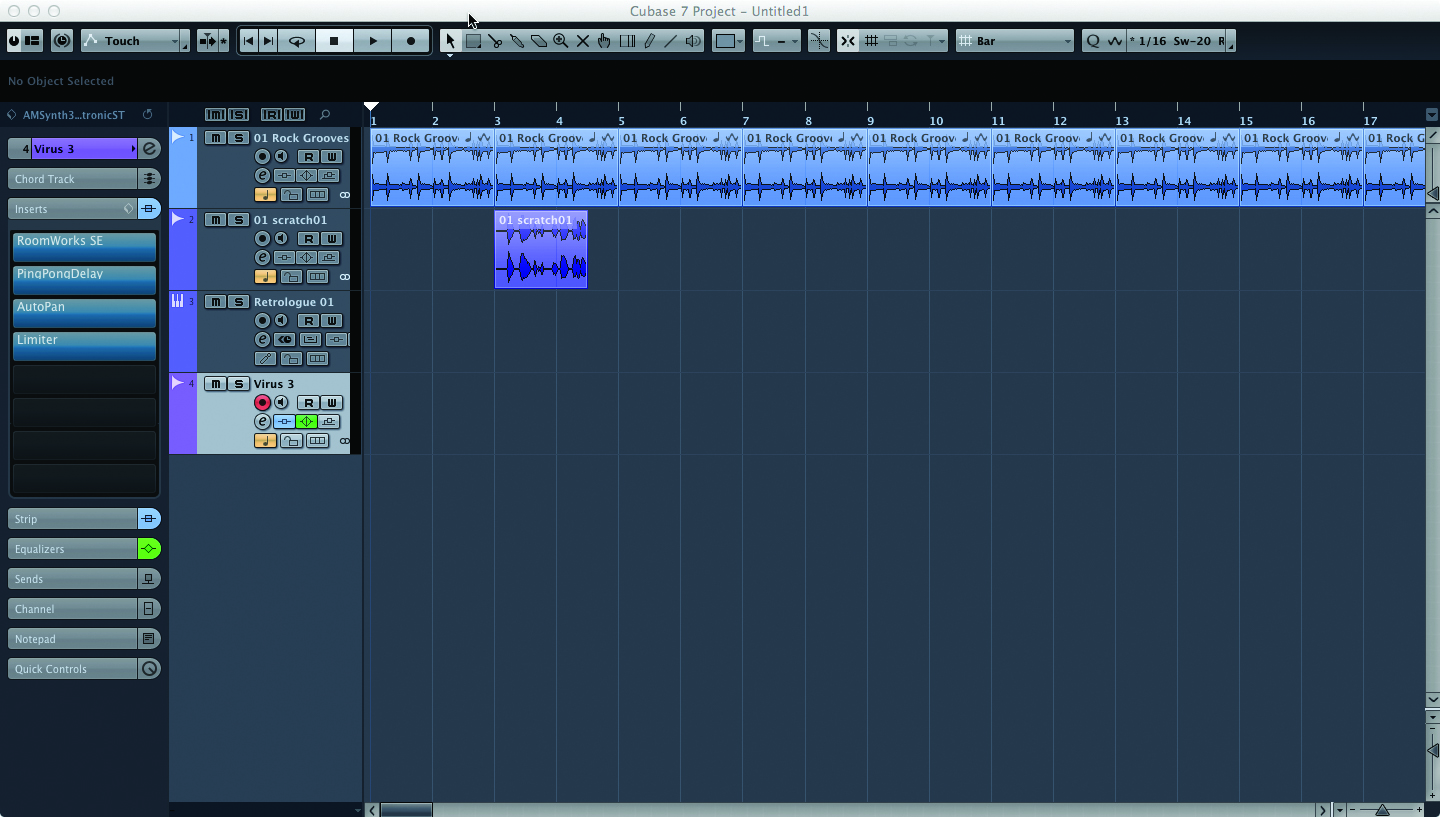 3: Once these are loaded they can be treated as any other track within Cubase and either audio or MIDI information can be recorded onto them. Any effects and so on that are loaded are inserted post-capture, so can be changed at a later time if you decide that you are unhappy with the sounds.

4: To change the track preset once it has been loaded open the Edit window by pressing the ‘e’ button on any track header in the Channel Inspector panel. Once the Channel Edit window has been opened the track preset dropdown can be located in the top-right of the window. This gives quick access to the instrument and genre selections as well as the list of presets from the MediaBay. 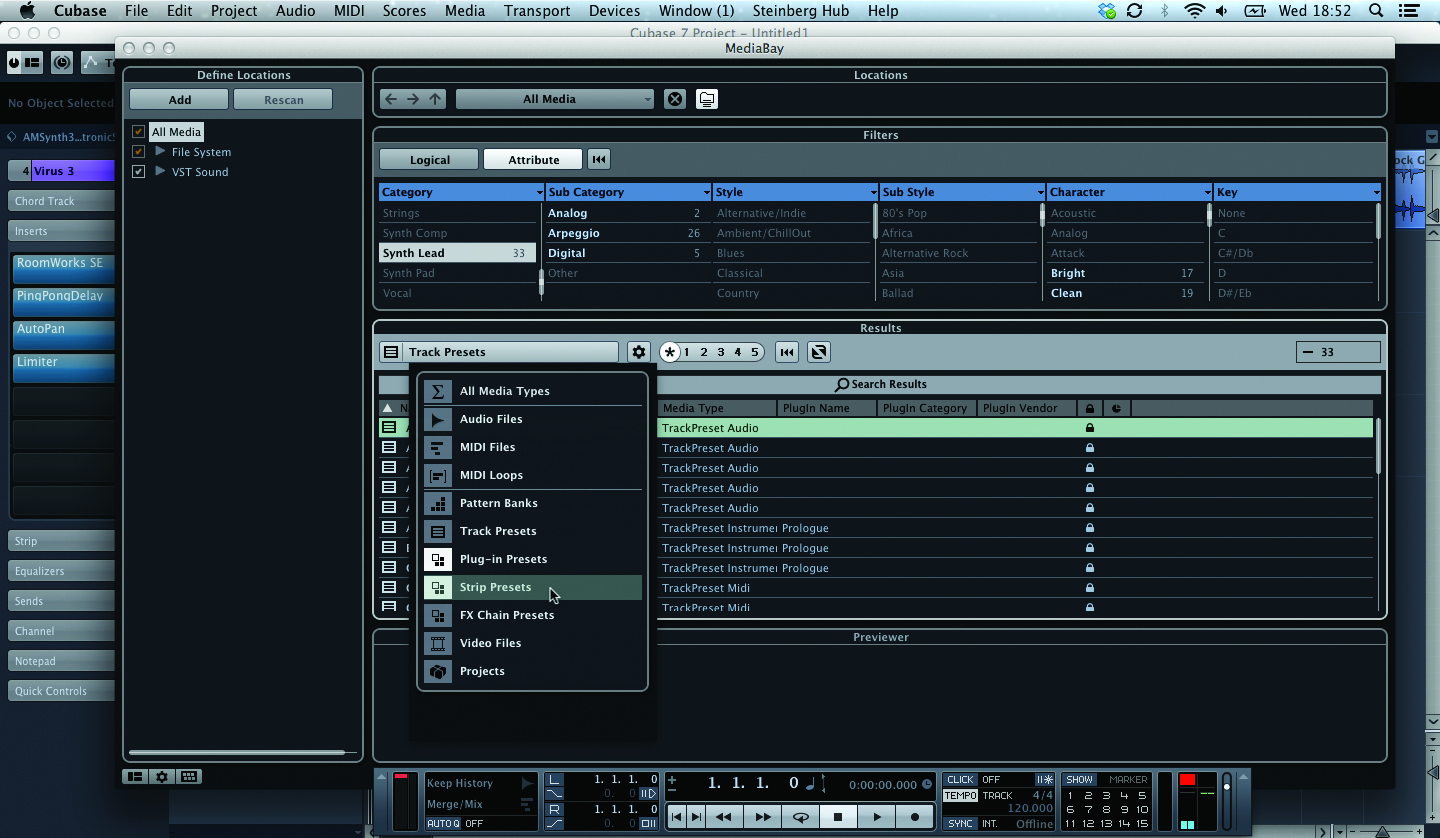 5: If you are unclear about which bits of track presets you might need, MediaBay also has presets containing only inserts or channel strip settings. These can be loaded independently and altered separately so that an entire track preset may not be needed if you want only the effects but want to set the dynamics processors yourself.

6: For those with little experience it is worth loading some track presets and reverse-engineering them to investigate how the programmers have constructed them. This way, when working solo later, track presets and insert presets will be required less often and you will be able to construct the sound-design yourself.