Back to basics: Adding melody and harmony in Ableton Live

Dressing your beats in memorable melodies and rich harmonies may seem like a daunting task but Ableton Live has a host of tools to help you through the process. Here we guide you through them. 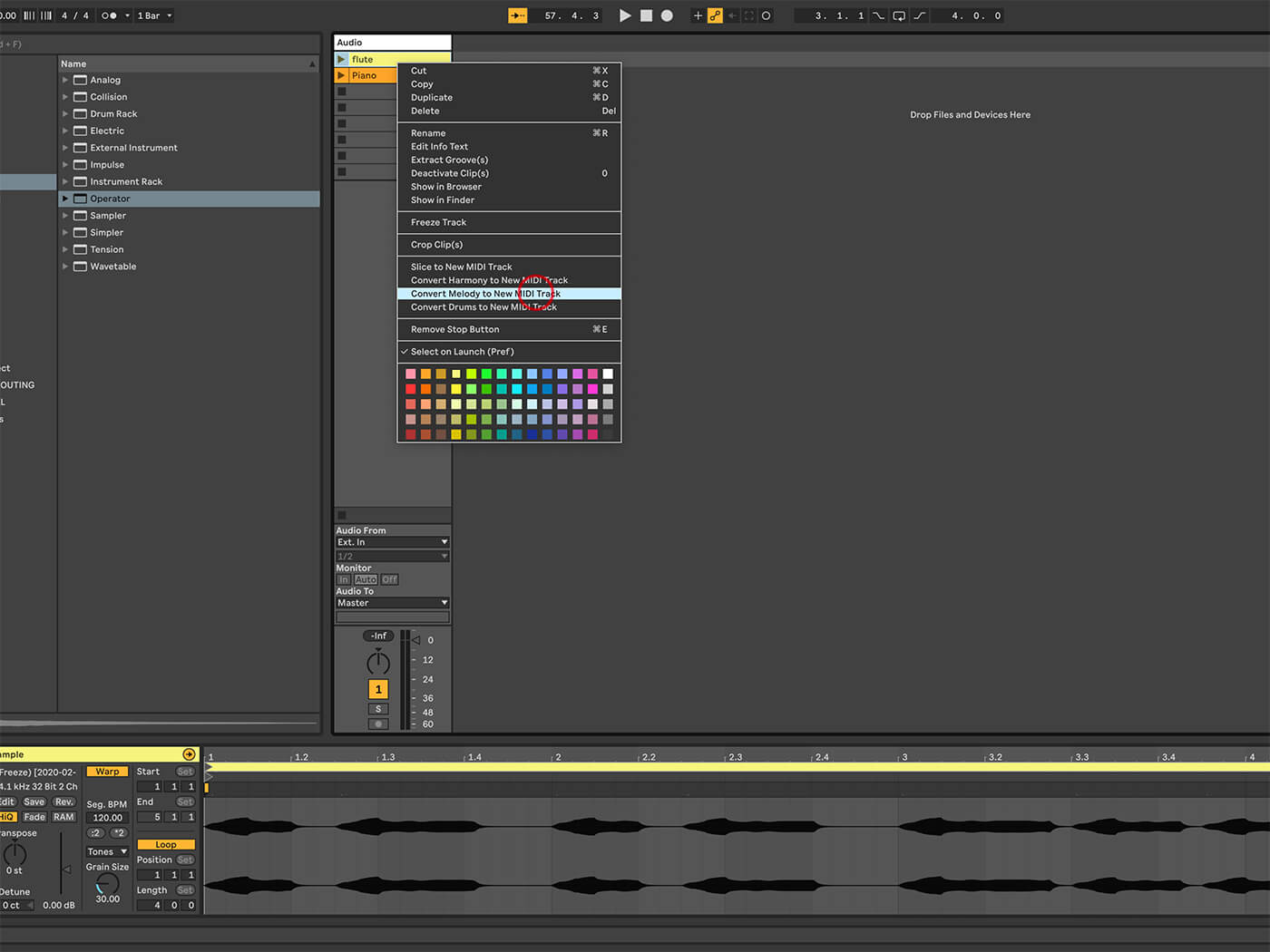 Ableton Live is a fantastic beat-maker, especially when used with Ableton’s Push instrument and Simpler sampler. But once you’ve created your ideal rhythmic components and laid down that just-so percussion line, what comes next? Do you bring in somebody else to write a melody and spin some chords? Do you dig into a sample library? These are options, sure, but it’s nice to have some creative independence. Even if you’re a numbskull when it comes to musical theory (this writer admits as much), shaping parts that add depth and mood to your productions doesn’t have to be difficult.

Throughout this tutorial, we’ll adhere to Ableton’s definition of melody and harmony: melody is the tune, the lead, the hook, a one-note-at-a-time part that replaces or interacts with a vocal line; harmony refers to chords, made up of three or more notes played together. Between these, there’s a world of moods and expressive journeys on which you can send the listener. These are what make your mixes accessible.

If you can’t make it, fake it

Ableton Live has the tools to help laymen and experts alike come up with fresh ideas. As stated, here, we try to keep everything compatible with Live Intro (though the audio-to-MIDI conversion requires Live 10 Standard or Suite – fortunately that’s not a major part of today’s exercise).

You’ll find MIDI effects in all versions of Ableton Live. The Scale effect is a suitable place to begin. Apply Scale and every note that passes through it – whether it’s from a keyboard, from Push or from a MIDI clip – will be made to conform to notes in your selected scale, making it literally impossible to play an incorrect note. If you need to set a specific scale, use the Base control to choose a root note (a starting point for the scale).

This effect has plentiful presets and you can even draw in your own custom layouts should you want to experiment. The presets here are the same ones accessible from Push, where you can view and play them on the pads. You could also try adding Arpeggiator to the track to automatically generate extra notes – Scale will keep them in check.

For harmony leads, use the Chord effect to add up to six extra notes and set the first control to a value of anything up to plus or minus 36 semitones. We recommend beginning with +5 or +7 semitones. That’s a fourth and a fifth interval, both common and adaptable ‘chords’. To double the part, set it to +12, which will be an octave above, or double the frequency, of the first note, and thicken the sound rather than adding additional harmonic interest. If you play guitar, think of it as a powerchord – that’s the root note, the fifth and the octave.

Be wary of the Random effect. When used on its own, this generates a mess of seemingly incompatible notes. However, if used in conjunction with Scale, the notes produced by the Random effect will be forced into place. This is fantastic for creating unplanned melodies, as well as complete chord sequences – just remember to keep Random in check using other, more stable effects.

Use multiple tracks or an instrument rack to create a setup that sees incoming notes pass through two sets of MIDI devices and different instruments. With some experimentation, you could find you’ve got a melody, bassline and chords playing together off a single incoming note. Here, you’re getting into generative-music territory but you could always record the MIDI notes to a separate track and edit them later to get the best of both worlds: randomly created parts with detailed editing.

Alongside Ableton Push, there are plenty of third-party tools that can help with this, from the Novation’s Launchpad Pro and Arturia’s BeatStep Pro to numerous composition aids and plug-ins, such as Intuitive Audio’s Chord Composer. Even some guitar effects pedals can be used to generate sequences and patterns with pitch shifting and delays. The other option is to get a keyboard and learn some chords, a worthwhile transferable skill that will come in handy when using all manner of software.

Even if you’re not interested in songwriting, being able to create your own melodies and chords will grant you some degree of independence from other musicians, and it should save you from having to resort to loop libraries so often. Though it’ll help tremendously, nothing we’ve mentioned here requires any great understanding of music theory. 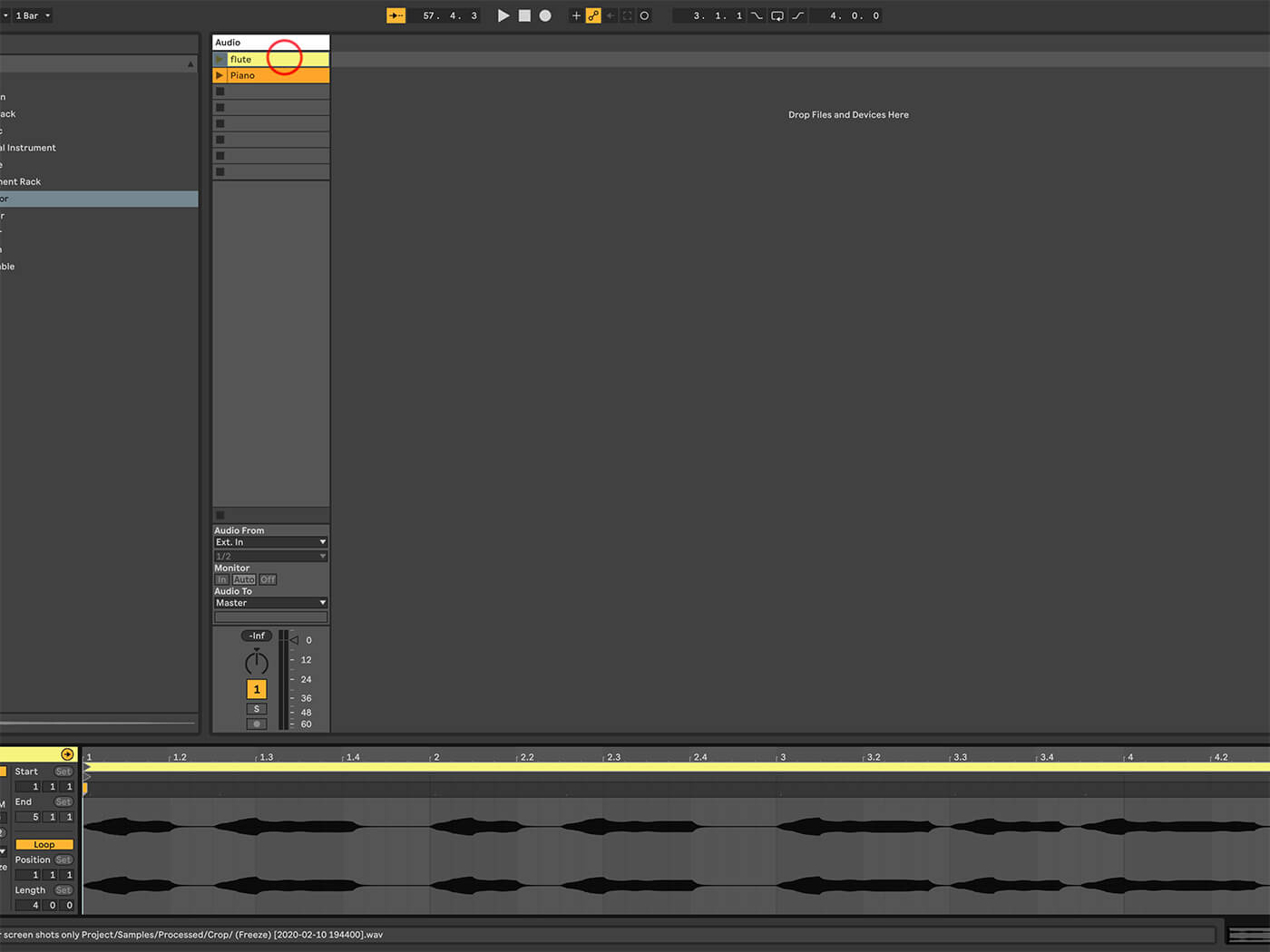 1. Begin by opening our example Live set, Harmony Melody Example, for which you’ll need Live 10. If you don’t have it, download the demo from ableton.com – it won’t conflict with older versions you have installed. 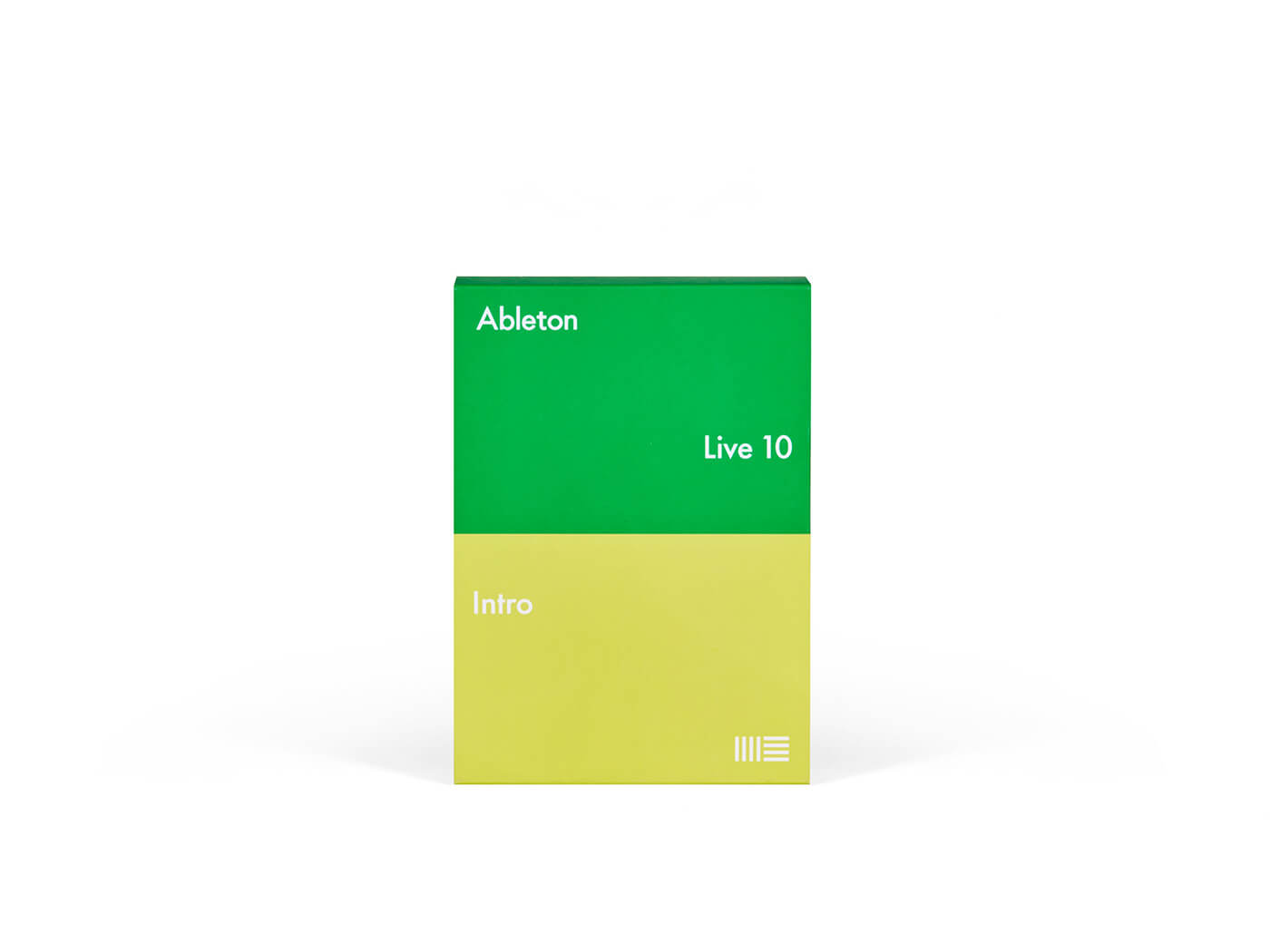 2. As with all the tutorials in this series, we’re doing our best to make everything compatible with Live 10 Intro, the most affordable version of Live. It’s limited in some areas but we can work around most of them.

3. One way to get a melody is to capture it from elsewhere – maybe a recording of somebody singing or playing a single-note instrument, such as a flute or bass guitar. Right-click on the clip called Flute and choose Convert Melody to New MIDI Track. 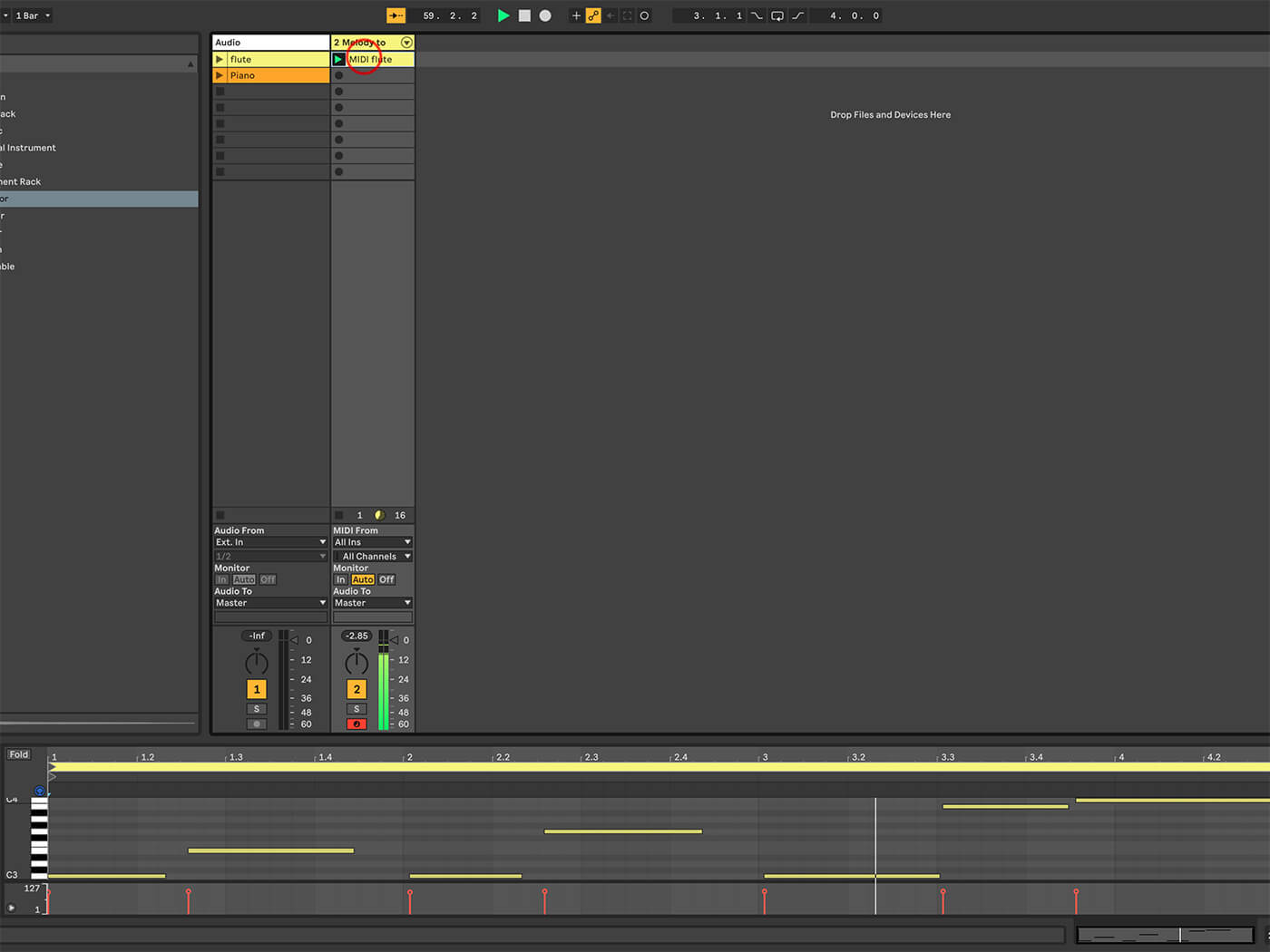 4. Now you have a new MIDI track containing a clip based on the recording, as well as a default instrument sound so it can be played. You can swap this for any instrument sound and edit the MIDI notes as you see fit. 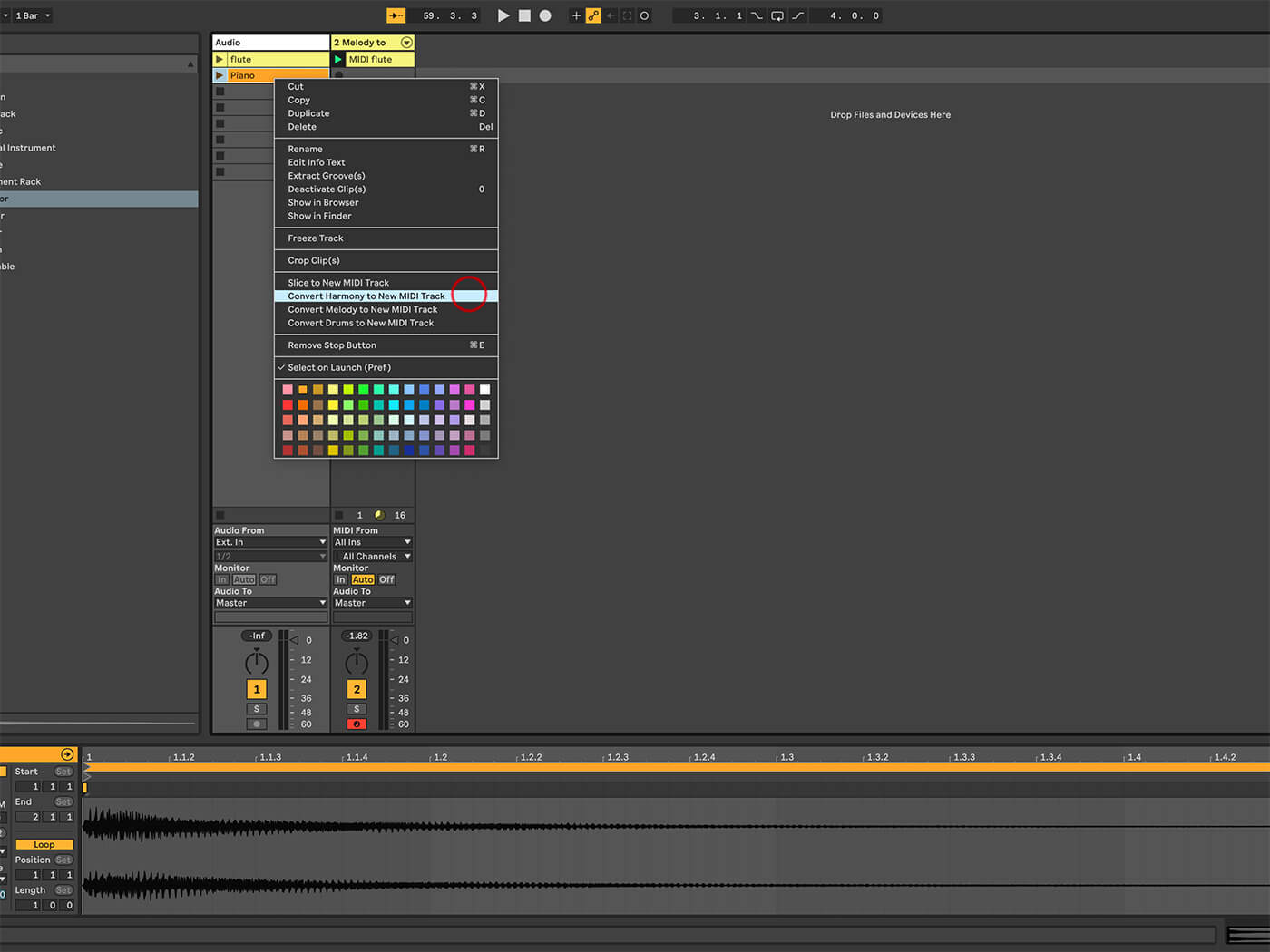 5. It’s the same with harmony parts. Right-click on the clip called Piano and choose Convert Harmony to New MIDI Track. The quality of the results from these operations depends on that of the original performance, as well as factors such as background noise. 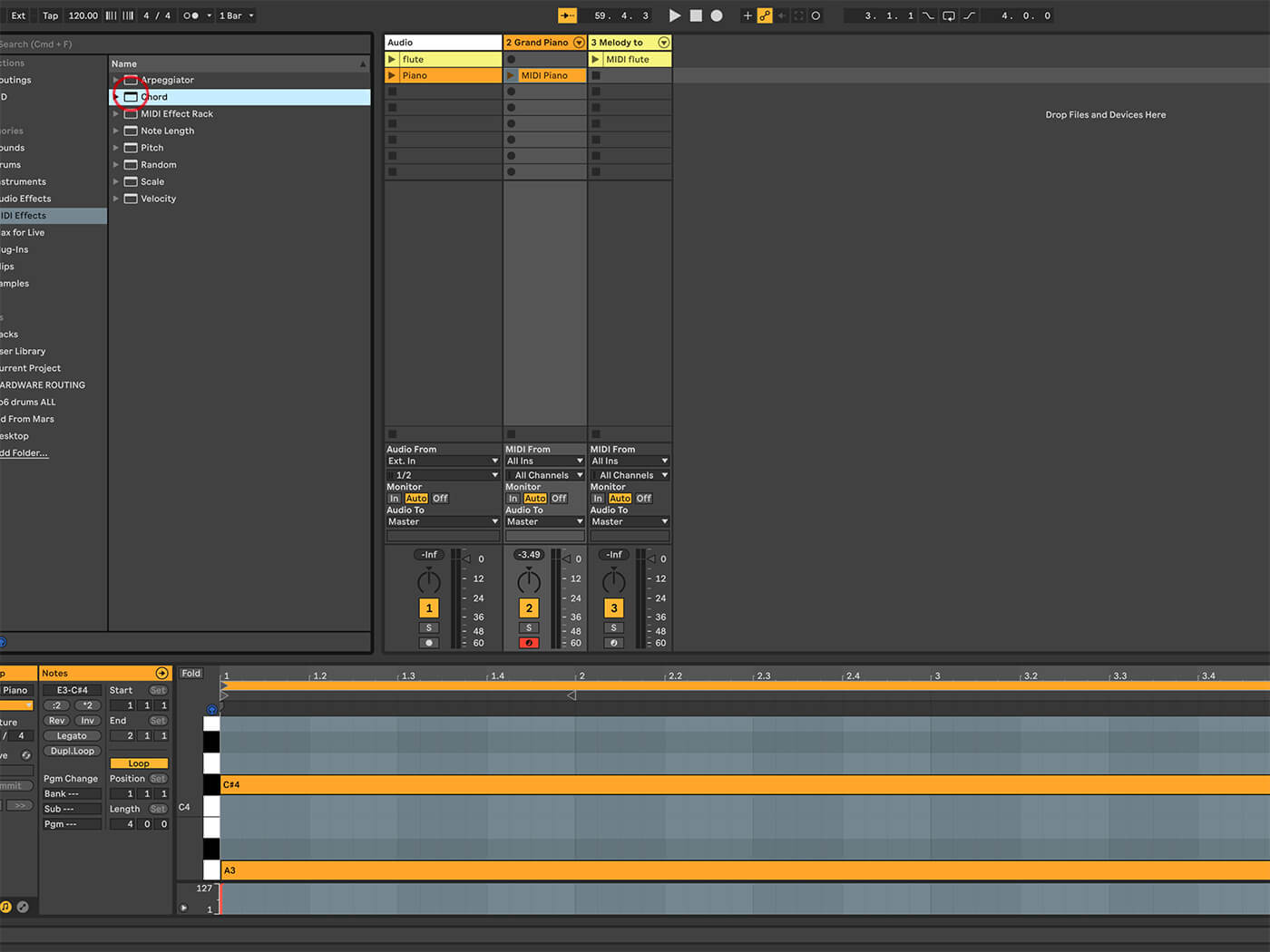 6.  Ableton Live’s MIDI effect devices will help you create a melody or chord sequence. You can play almost anything, from a clip to live sounds via a keyboard or pads, and get something musical out the other end.

PUSH TIP 1 Alongside those playable pads, Push can help you with your melodic and harmonic needs. You can configure a root note for the onboard layout (indicated by the darker pads on the grid) and configure the layout to conform to a specific scale, chosen through the Scale button and the useful browser on the display. 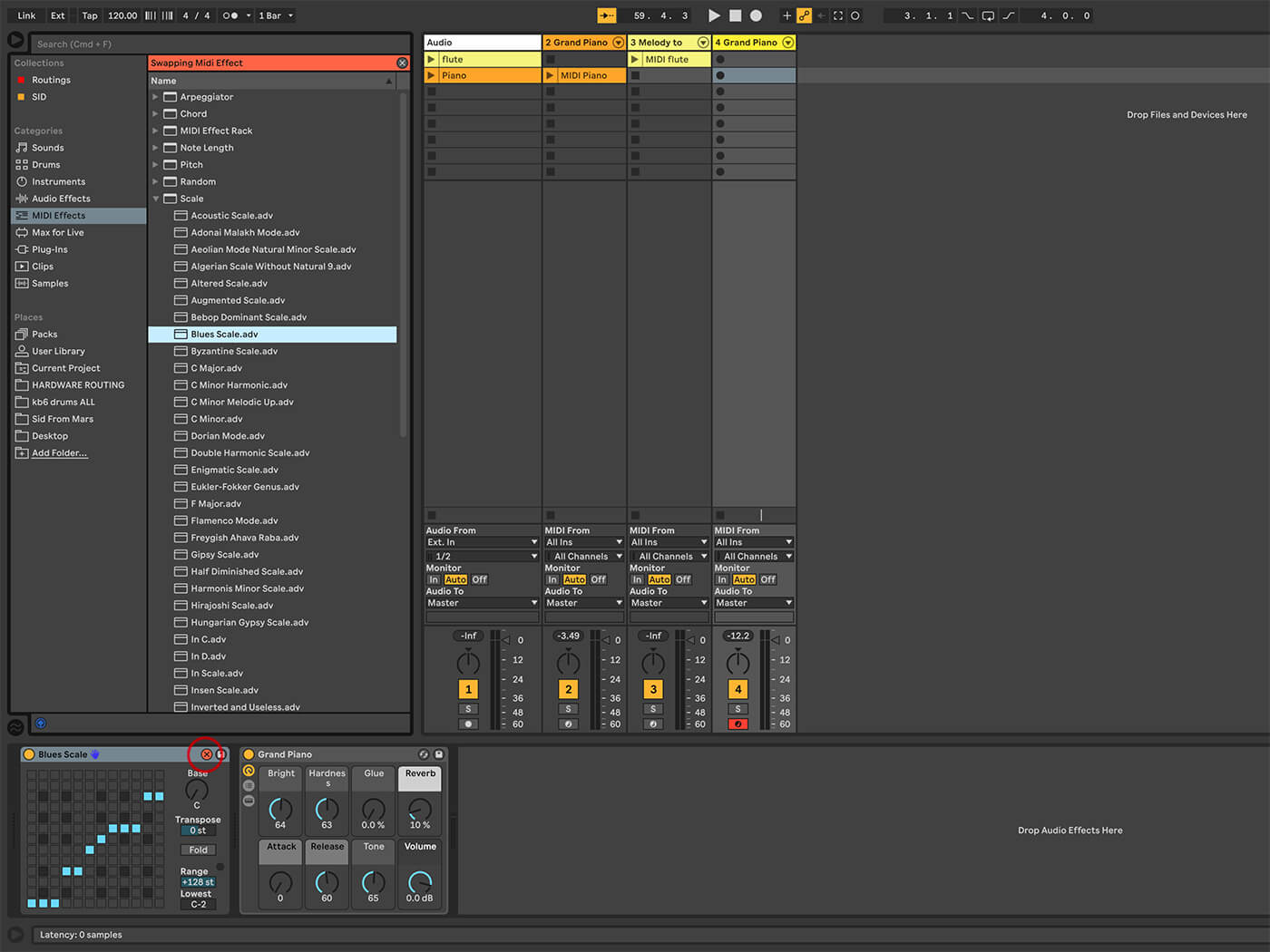 7. The Scale device includes a library of presets for different types of scales (the same ones accessible from Push). Try loading and auditioning a few of these and, as you play your keyboard, you’ll hear that your notes have been changed to fit the scale. 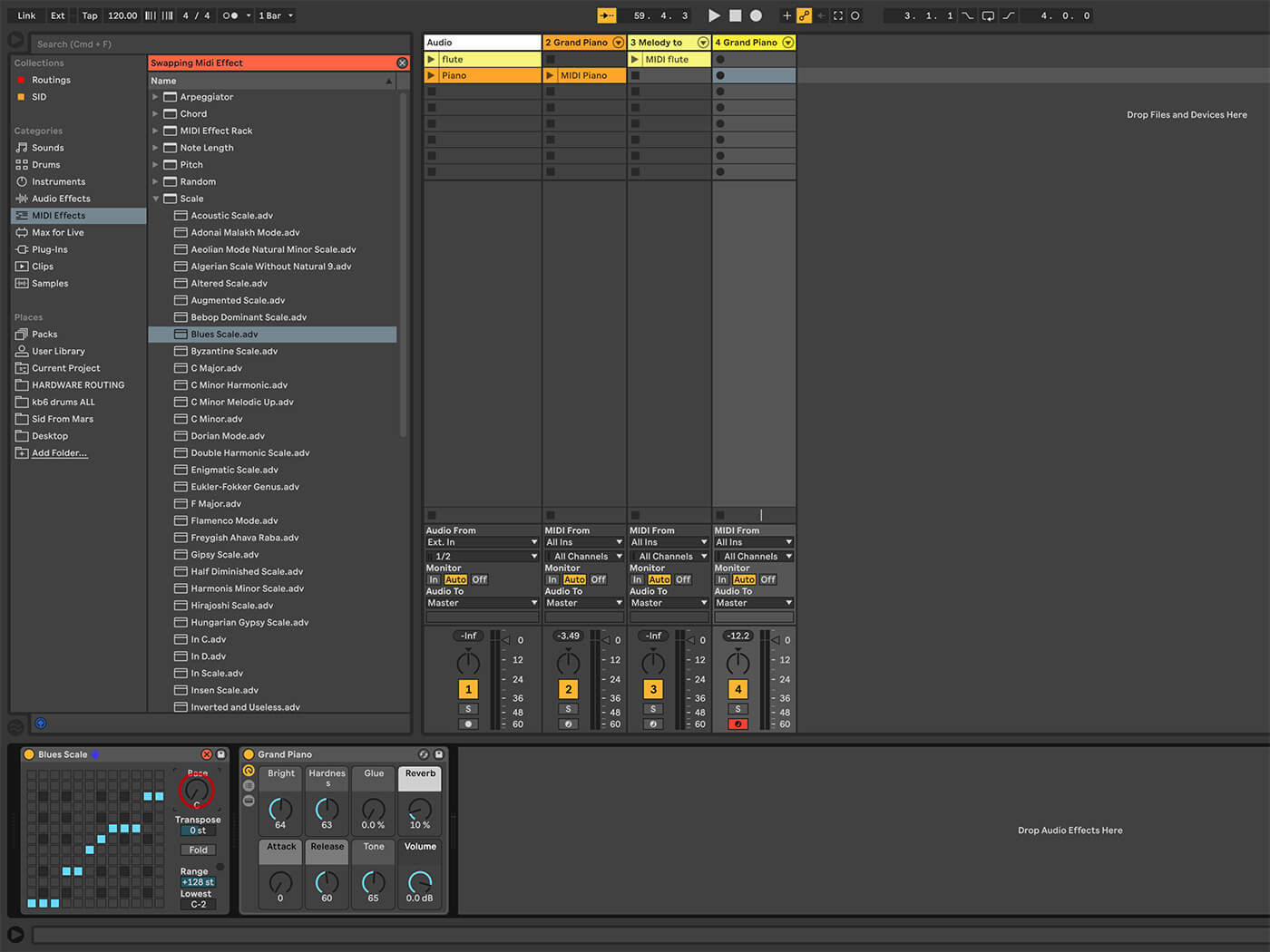 8.  If you don’t have to fit a particular scale to accommodate anybody else – if you’re working on your own fresh piece of music, that is – simply choose any scale and set the Base note as you see fit. 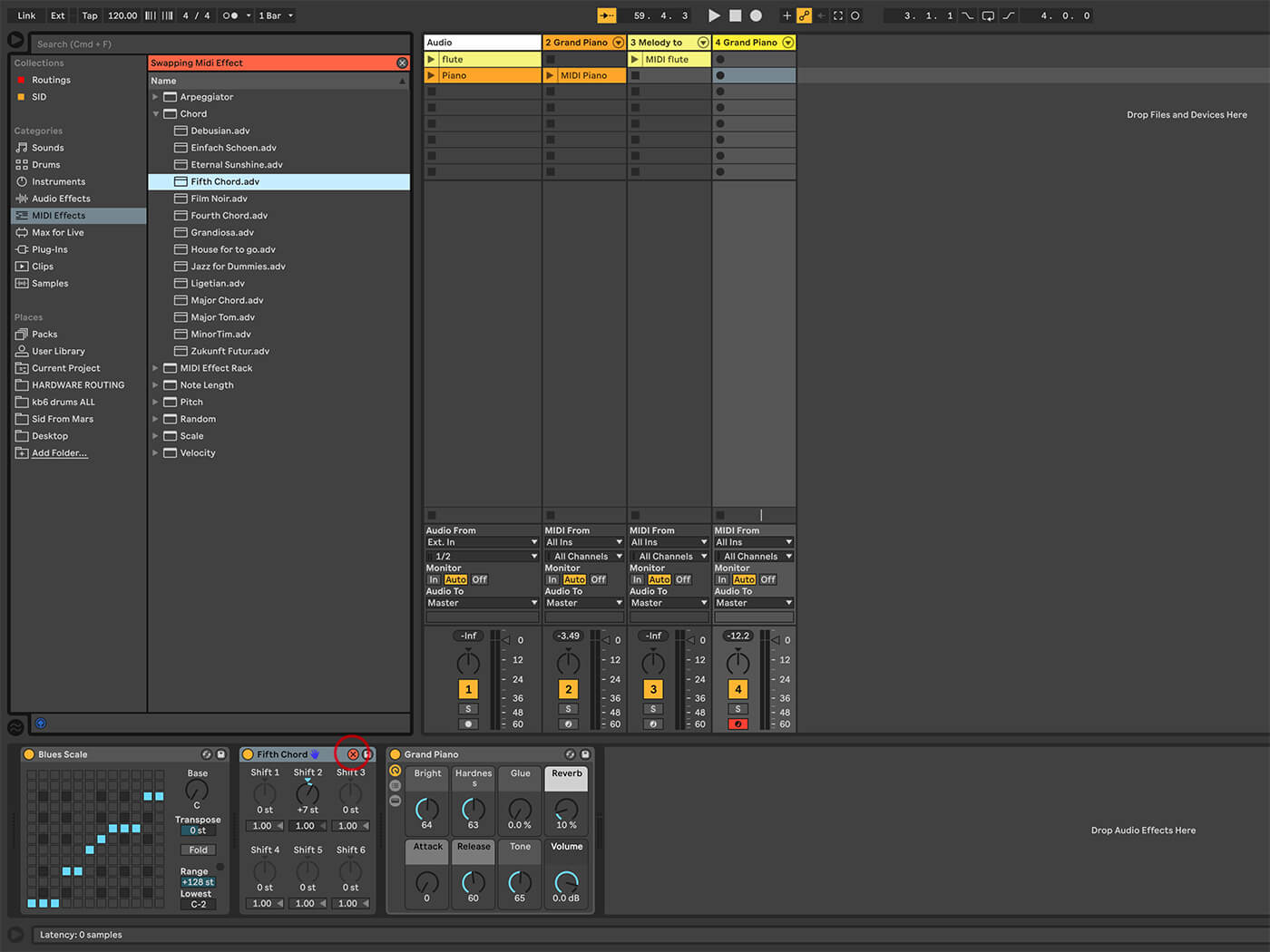 9. Try the Chord effect and go through the presets again. Make sure Chord loads after the Scale device. That way, any notes created will still conform to your chosen scale. Chord can add up to six notes either above or below the original. 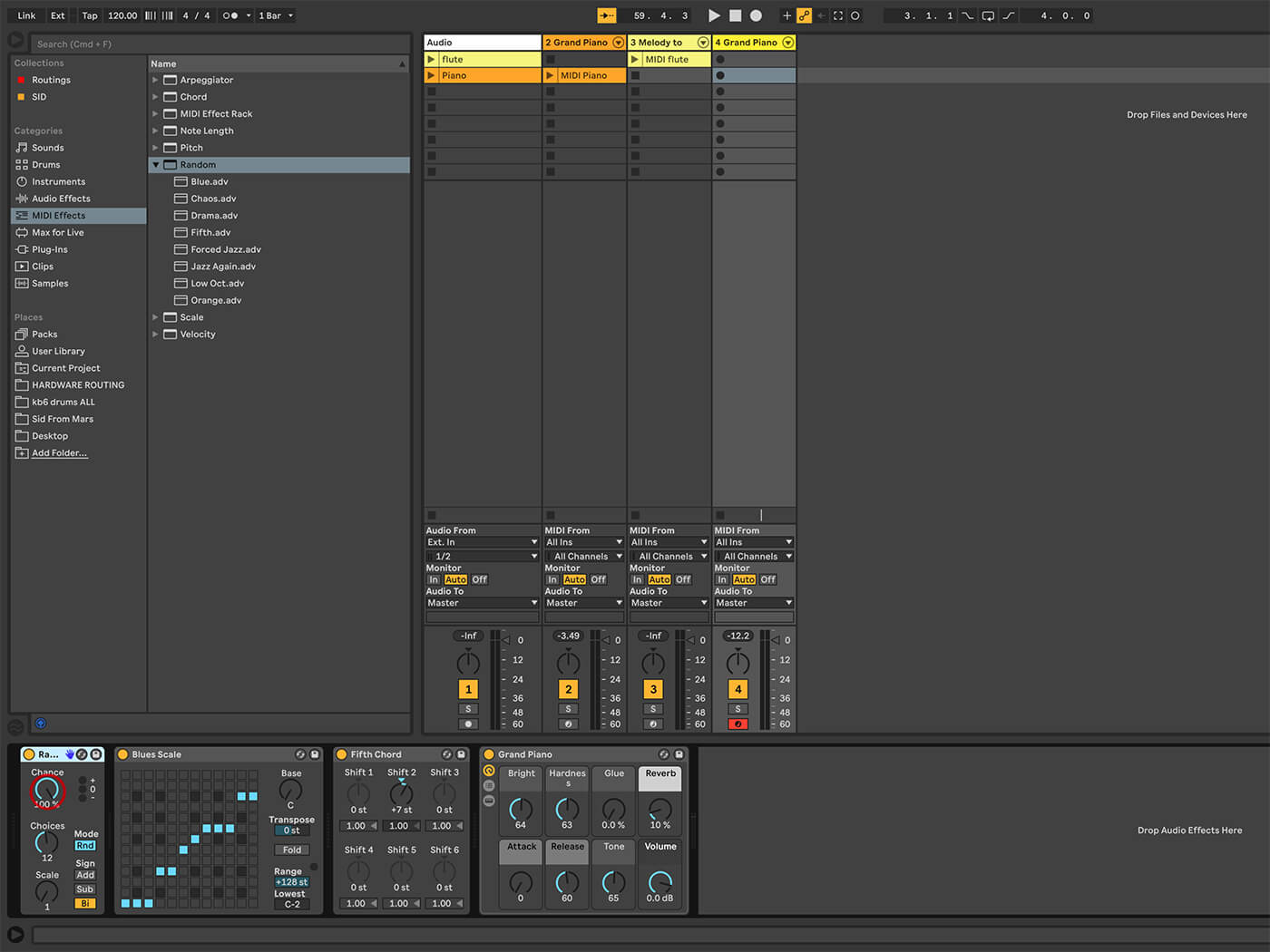 10. Take things a step further by adding the Random device at the front of the chain. Set Chance to 100 per cent and Sign to Bi. Now it will randomly change the pitch of all incoming notes. The Bi setting will allow you to shift them up or down. 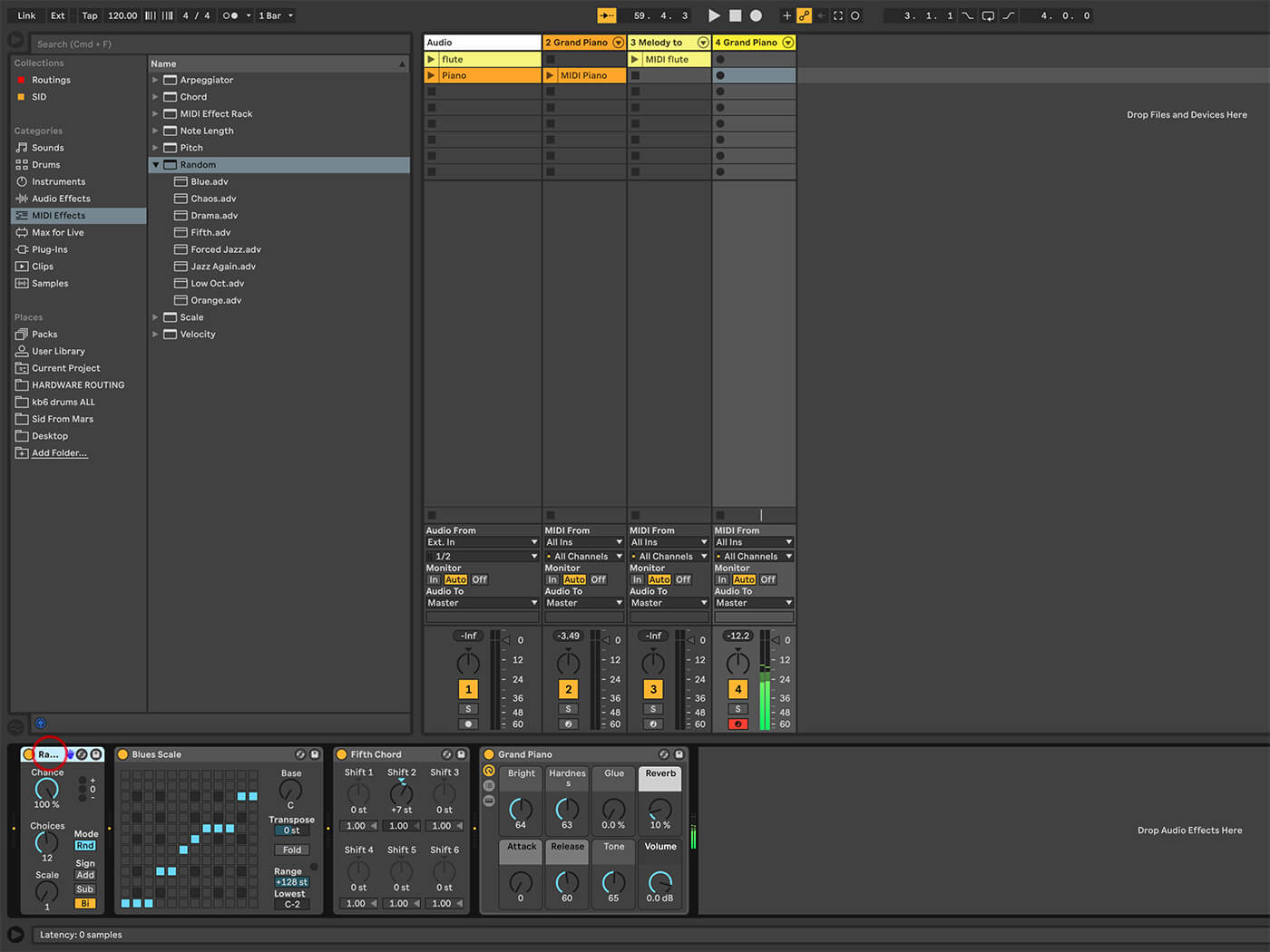 11. New notes are likely to come in at a different pitch. But because Random is set to before Scale and Chord, the new notes will still conform to the scale and root note you’ve defined for your track, keeping things nice and tidy. 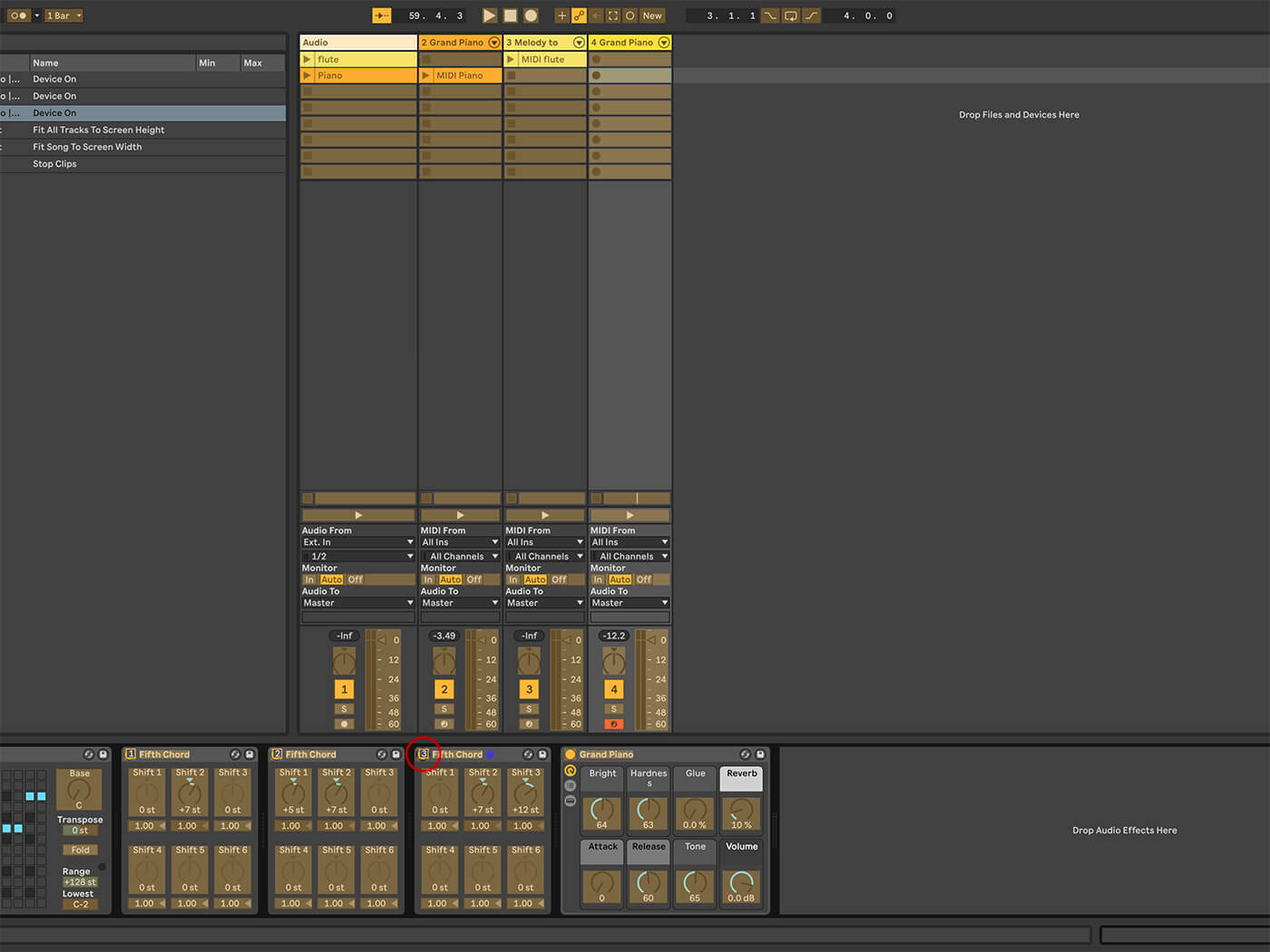 12. One way to make a chord progression without programming clips is to load a few separate instances of Chord in the same track, set them to different values and use MIDI or Key mapping to activate each.

PUSH TIP 2 Perhaps the most useful aspect of Push in this context is that it remembers your scale selections within each project, meaning there will be no nasty surprises when you start jamming afresh. Simply enjoy building rising and falling melodies without worrying about hitting the occasional bum note. 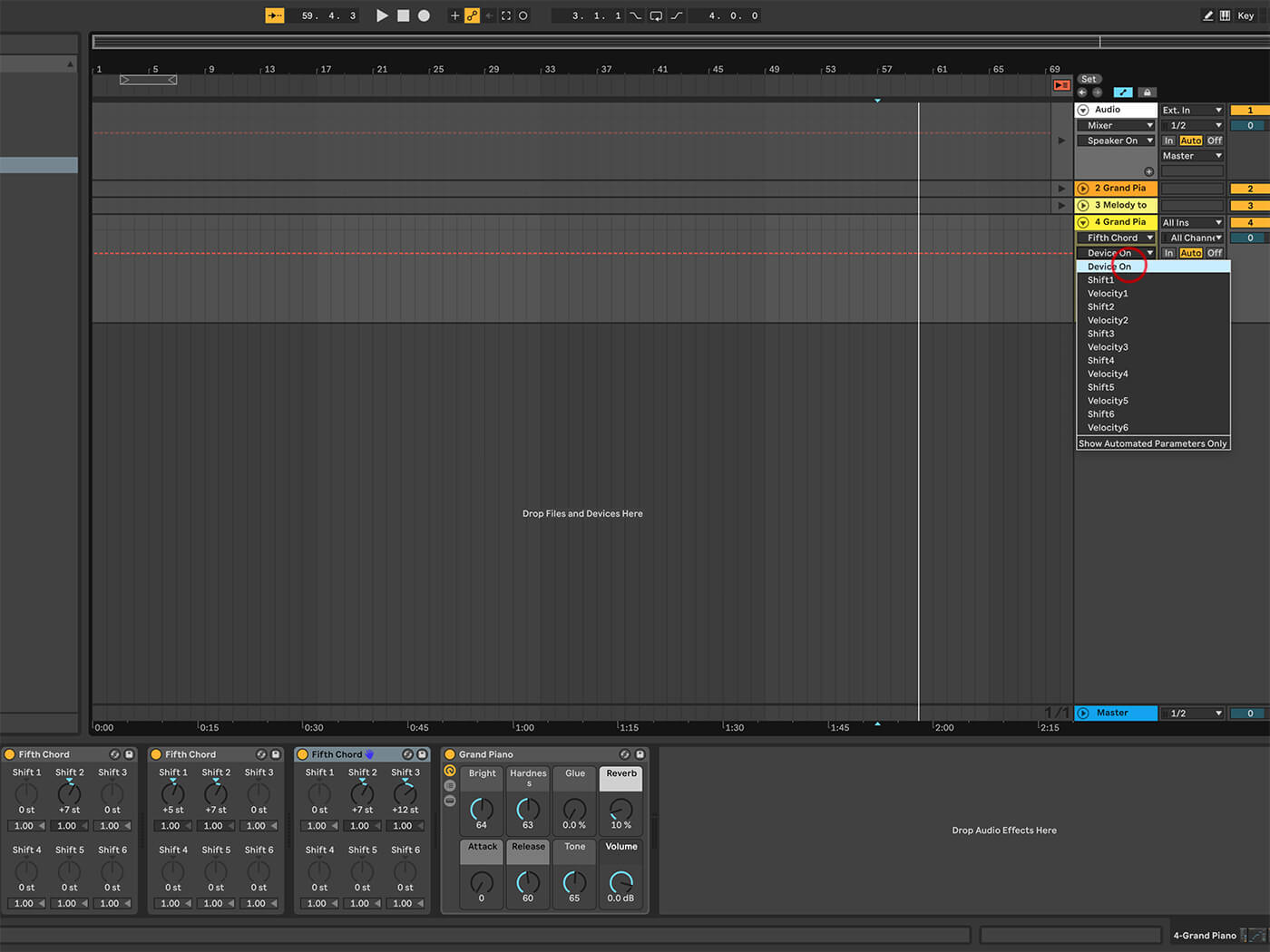 13. As usual with Ableton Live, everything we talk about here can be automated, which means you can choose how much of this happens in real time and how much is set in stone. Even the Chord device just mentioned can be automated. 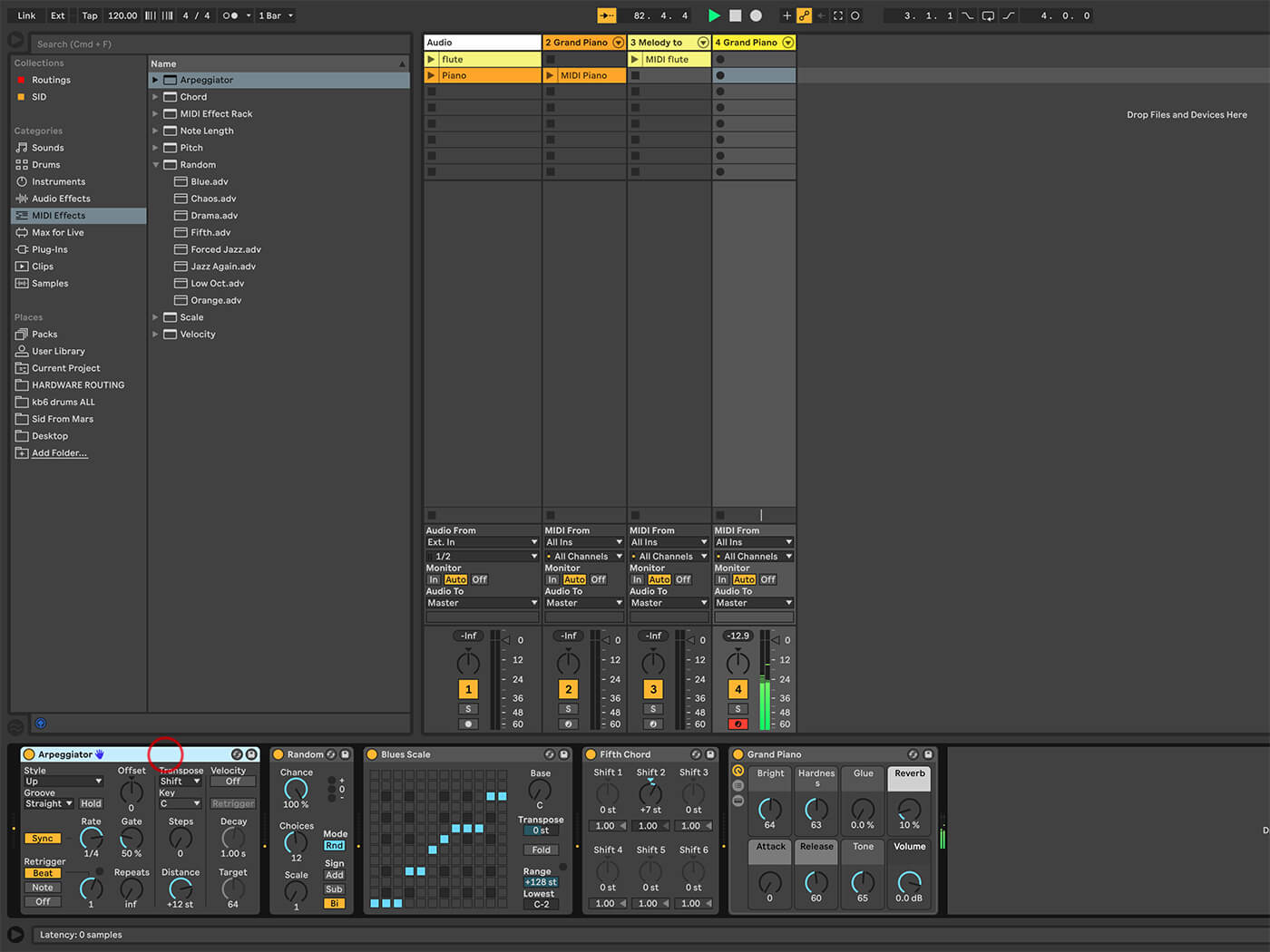 14. For another way to create chordal movement, add the Arpeggiator device but ensure that it loads prior to Random. Set it to a suitable Rate, such as ¼. Now, as you play a sequence of notes, it will follow the chords you chose earlier. 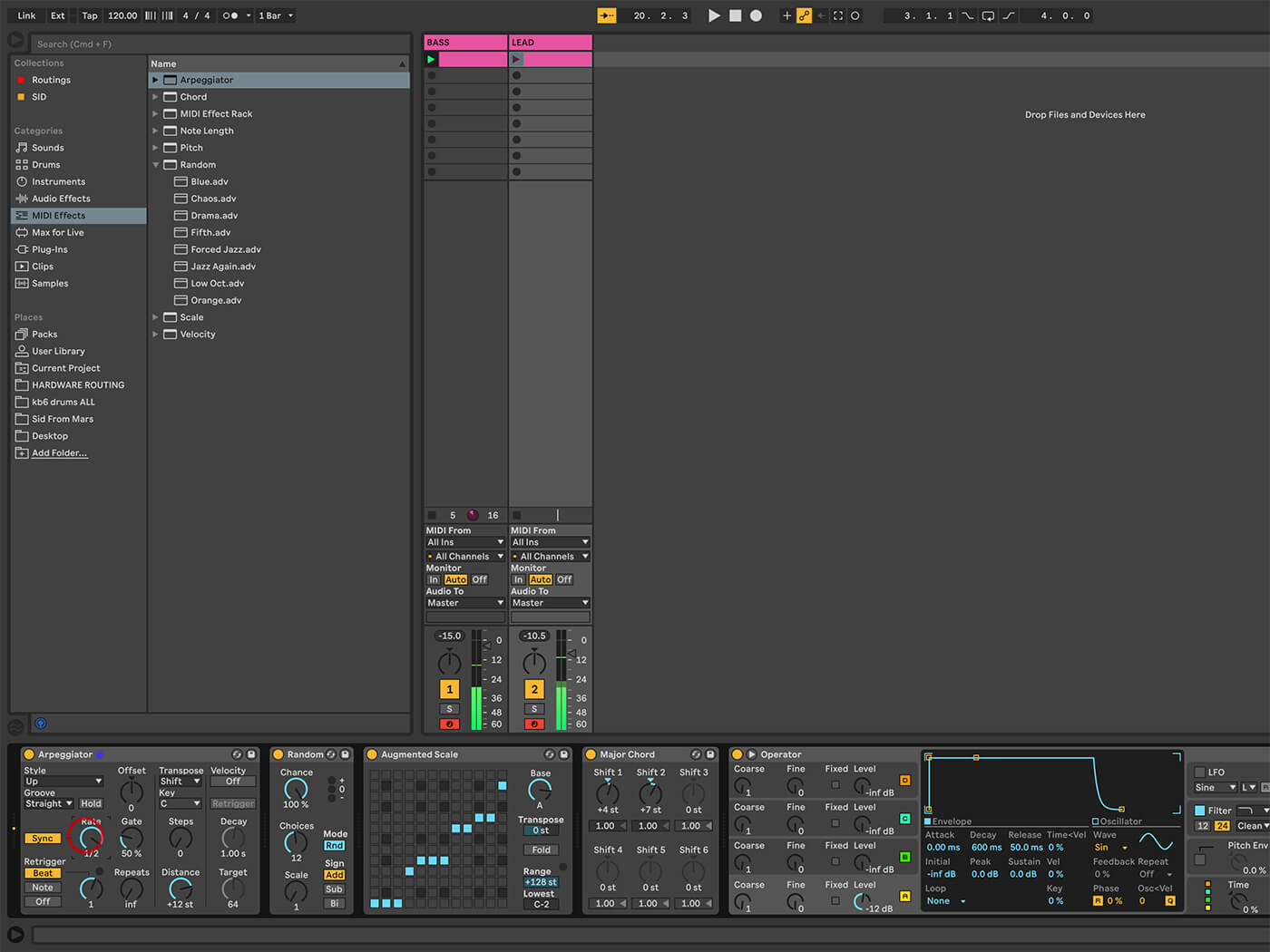 15. Take the time to set up two or more tracks and you’ll have a setup that sees a single incoming note trigger multiple tracks, which between them will produce a bass part, a melody or chords, in whatever combination you decide. An instrument rack would also be able to do this. 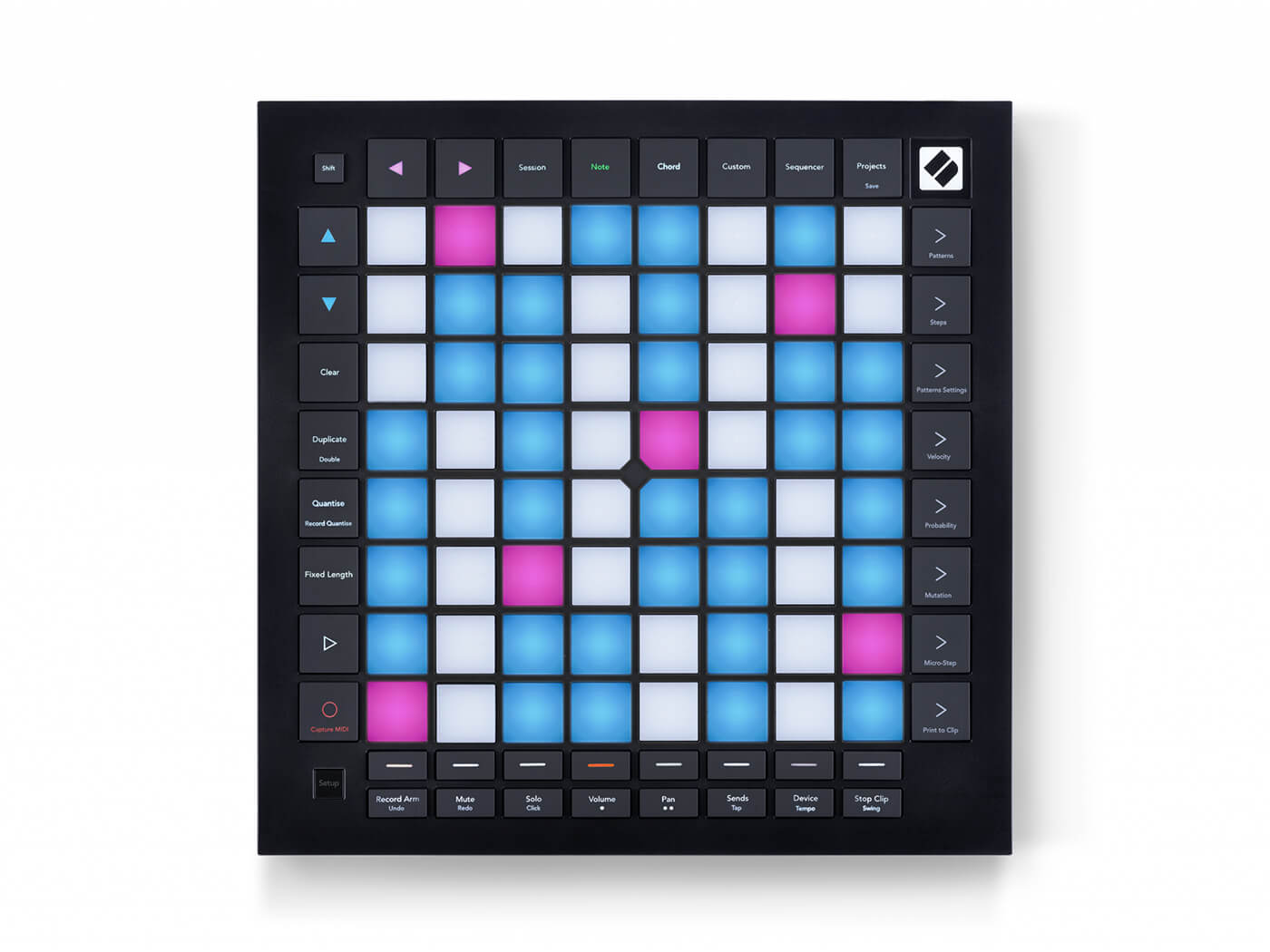 16. The new Novation Launchpad Pro has a Chord mode, which includes a grid that sees any selection of notes in a horizontal row form a functioning chord. Single notes played elsewhere on the grid will trigger a chord, giving you simple one-finger harmonies. 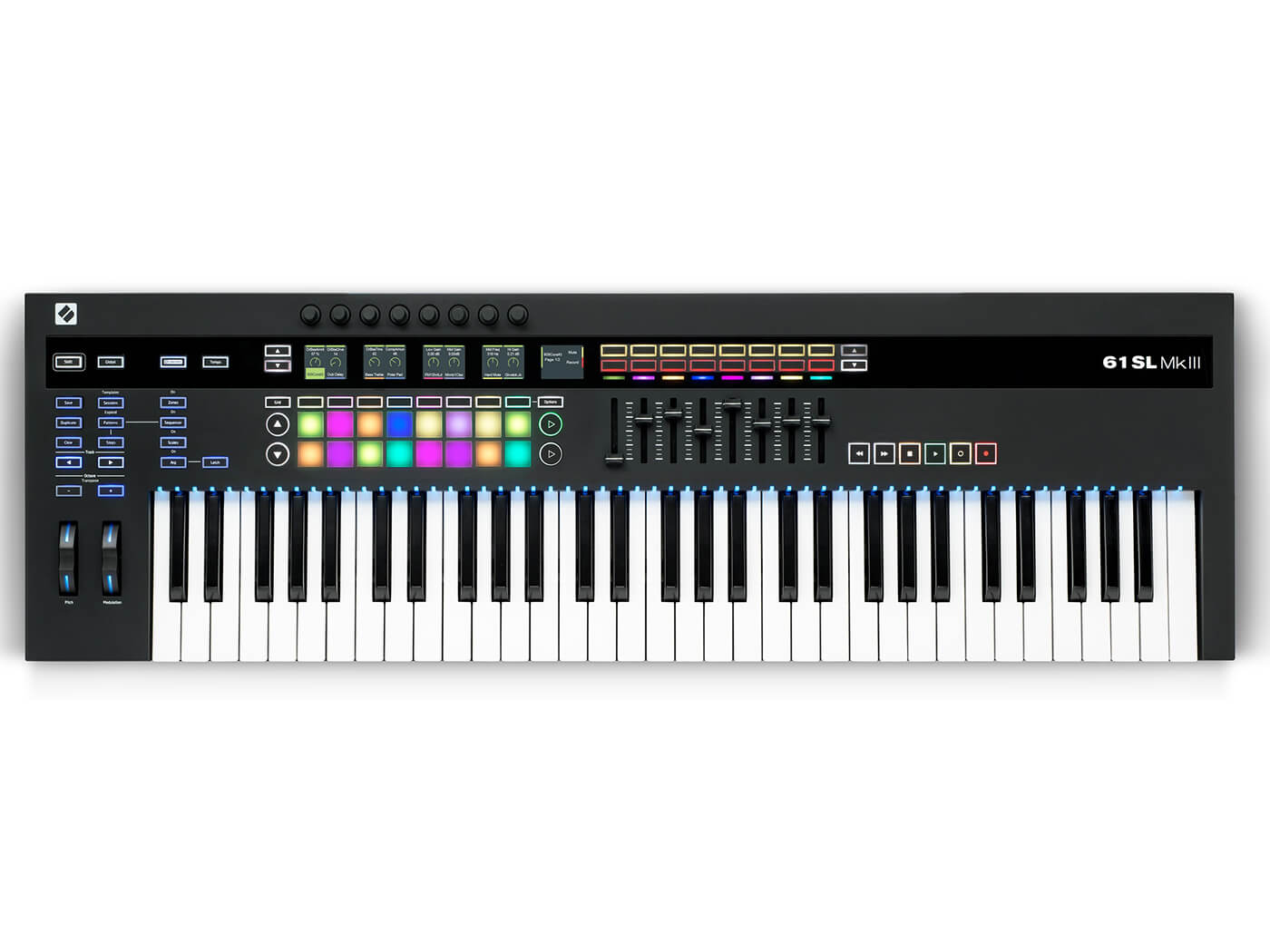 17. The Launchpad Pro also comes with the SL MkIII, arguably the closest you’ll get to a keyboard with all the functionality of Push at the moment. The SLMk III is well equipped and features scale settings that are unusual for traditional keyboard layouts. 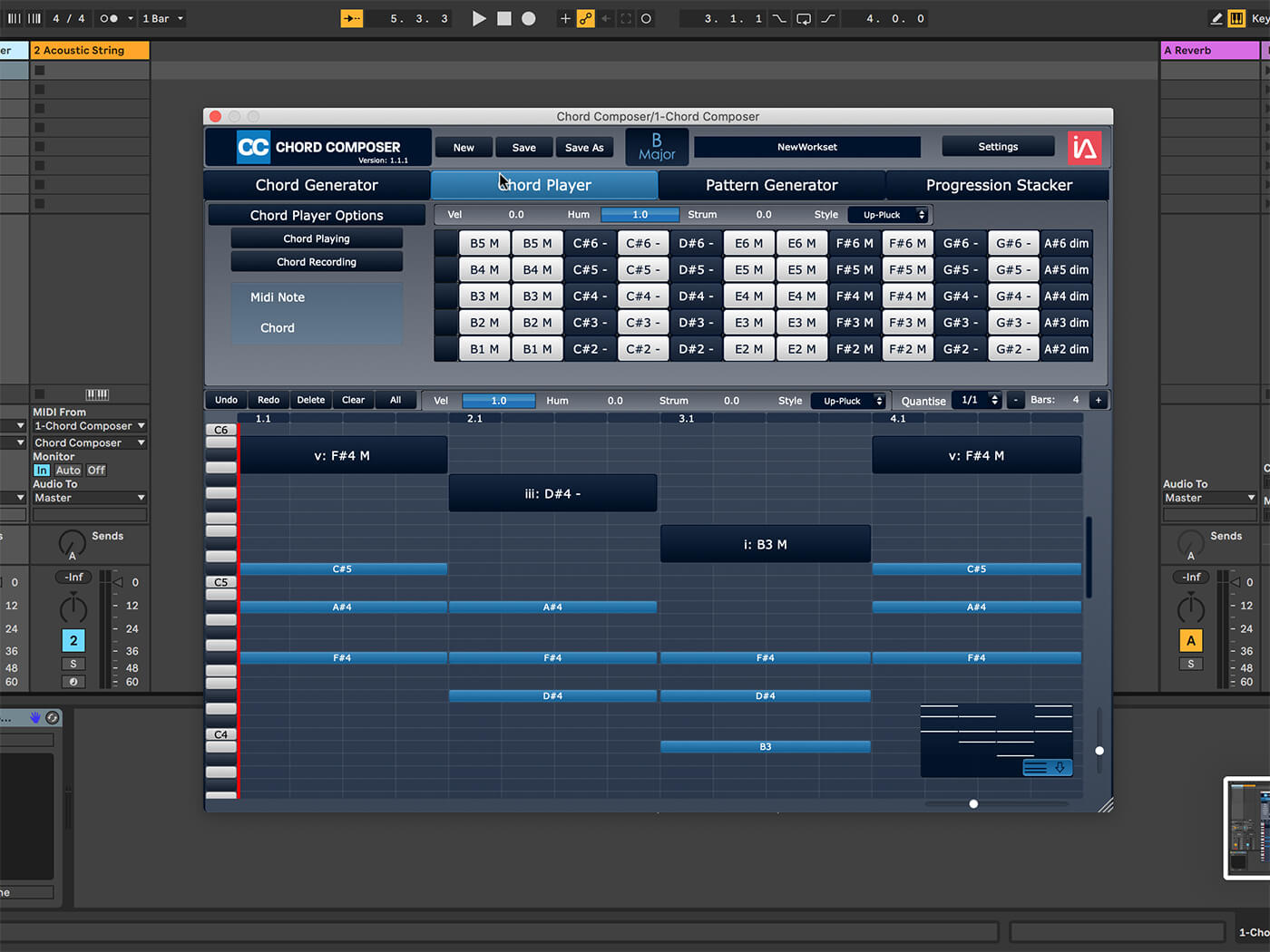 18. Intuitive Audio’s Chord Composer is a great plug-in (AU, VST, AAX) that makes it easy to create customised chord progressions, whether you have composition experience or not. Read our review of it here.

Check out our previous back to basics tutorials here. For more Live workshops, check here.