If you’re new to music-making and struggling to get a handle on the finer points of composition and arrangement, Chord Composer could be a vital creative tool. 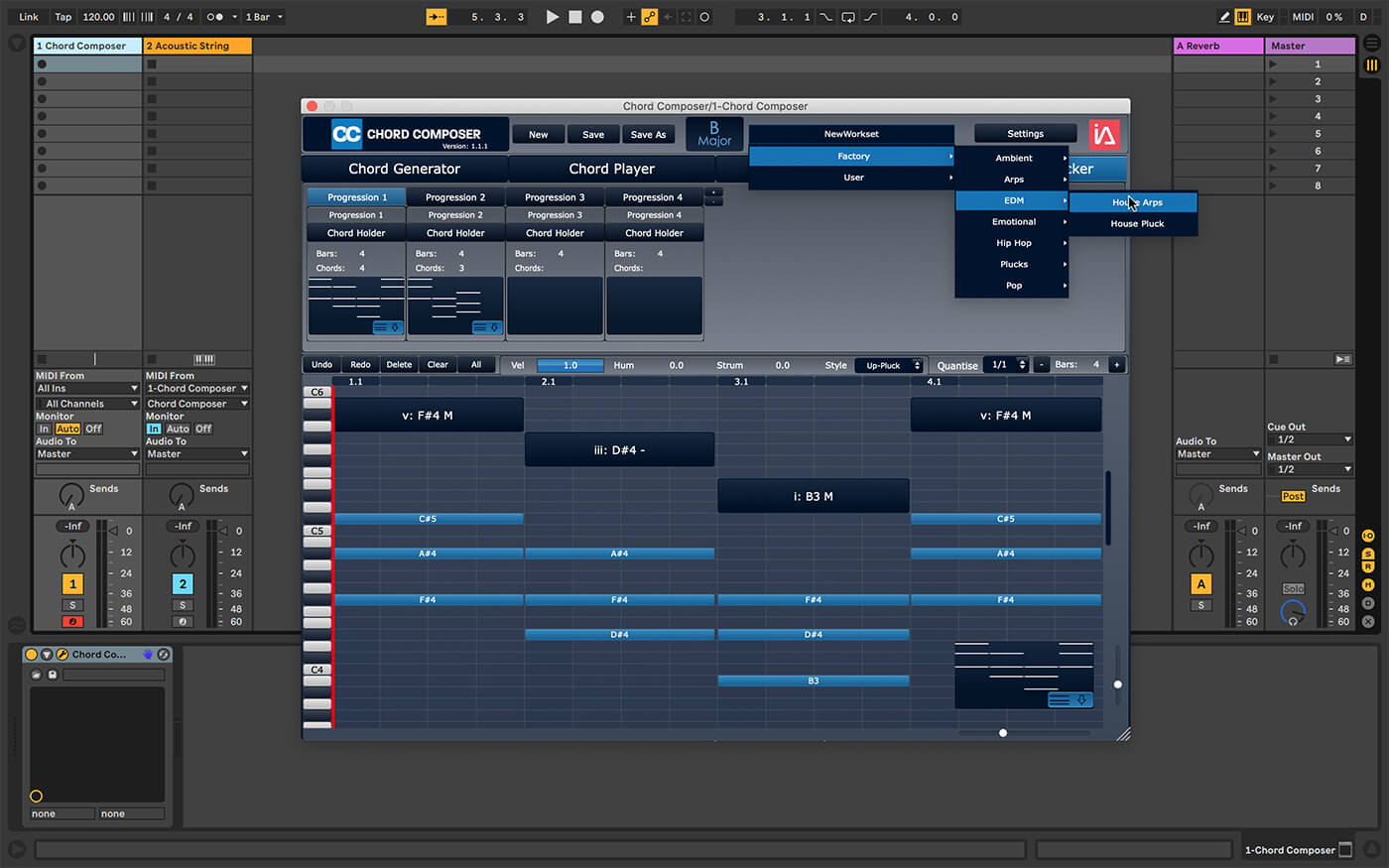 Why do we need a plug-in such as Chord Composer? Is there really a lot of demand for a tool that can create chords and chord progressions, when most DAWs include tools that can give an extra boost to your compositional activity? Well, it’s a bit like how we view pad-based MIDI controllers as alternative grid-style keyboards, instead of using a regular piano format.

Ableton Live might include MIDI effects such as Note Length and Random, and Logic Pro X has a useful selection of compositional aids including Arpeggiator, Chord Trigger, and Transposer, but sometimes, we could use something that provides more harmonic content – instead of the more electronic-music-oriented MIDI utility/performance functions.

The Chord Composer plug-in installs as an AU, VST, or AAX plug-in, and requires iLok activation; at least we can do that online now without needing a small (and quite easy to lose!) USB dongle. Being a MIDI plug-in, the download is a manageable size (136MB), and all support and documentation is handled via the web. On macOS with Ableton Live 10, it appears as a VST in the browser, and drags over into the drop area or an existing MIDI track. 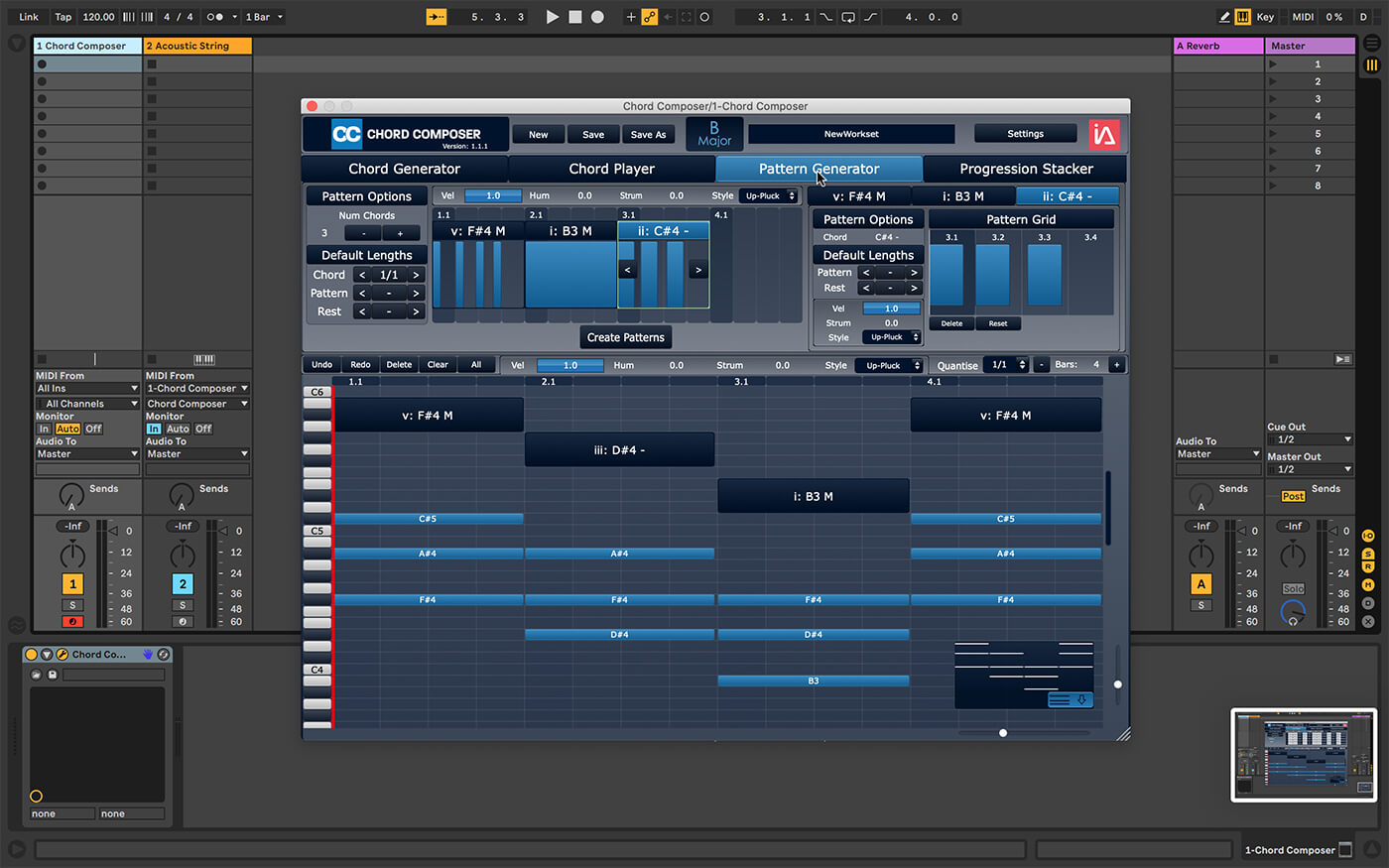 That struck a chord

The Chord Composer interface is mostly occupied with little boxes. This is quite typical for this type of plug-in, it’s a function of the tools involved. There’s a sequencer grid with piano-roll layout at the bottom of the plug-in window, while the upper part of the display shows one of four main workspaces – Chord Generator, Chord Player, Pattern Generator, and Progression Stacker. The plug-in window is scalable up to 150 per cent if necessary, which I find useful when working on a 13-inch laptop.

For a quick fix with Chord Composer, go to that first panel (Chord Generator) and click on the Create Chords button. The sequencer will be populated with a 4-bar chord progression, one chord at the start of each bar. Upon starting the host DAW, the chords play and are nicely sync’d to project tempo. Each of these generated chords can be swapped for another.

It’s a very simple way to get some chords going, even if you don’t understand musical theory. I next turn to the presets, or worksets, as they’re called here. These are accessed from the top right of the plug-in window, and categorised into sections such as Arps, EDM, Emotional, Hip Hop, and Plucks. Loading one of these adds new content into each of the four main tabs, so again, you have something accessible and ready to play.

Let’s look at the software in more detail. The top bar contains simple controls for saving and loading presets, as well as a large display showing the current key. A minimal settings pane contains support links, switches for toggling chord preview and the piano-roll marker, and scaling options. Then, from left to right are the four main workspaces, organised so there’s a logical progression across the plug-in window. You can work either from scratch, or by adapting a preset.

The Chord Generator is the place to define chord characteristics including the key, octave, type of chord, inversions and to add any extra notes if wanted. On the right is a Quick Pattern Generator, where randomly organised chord progressions can be loaded, in association with 20 timing-related presets, indicating exactly when and how often the chords will play: for example, Every Beat, 1/18th Surprise, and Quarter Strum; working with these is both fun and creative, just about the ideal combination. 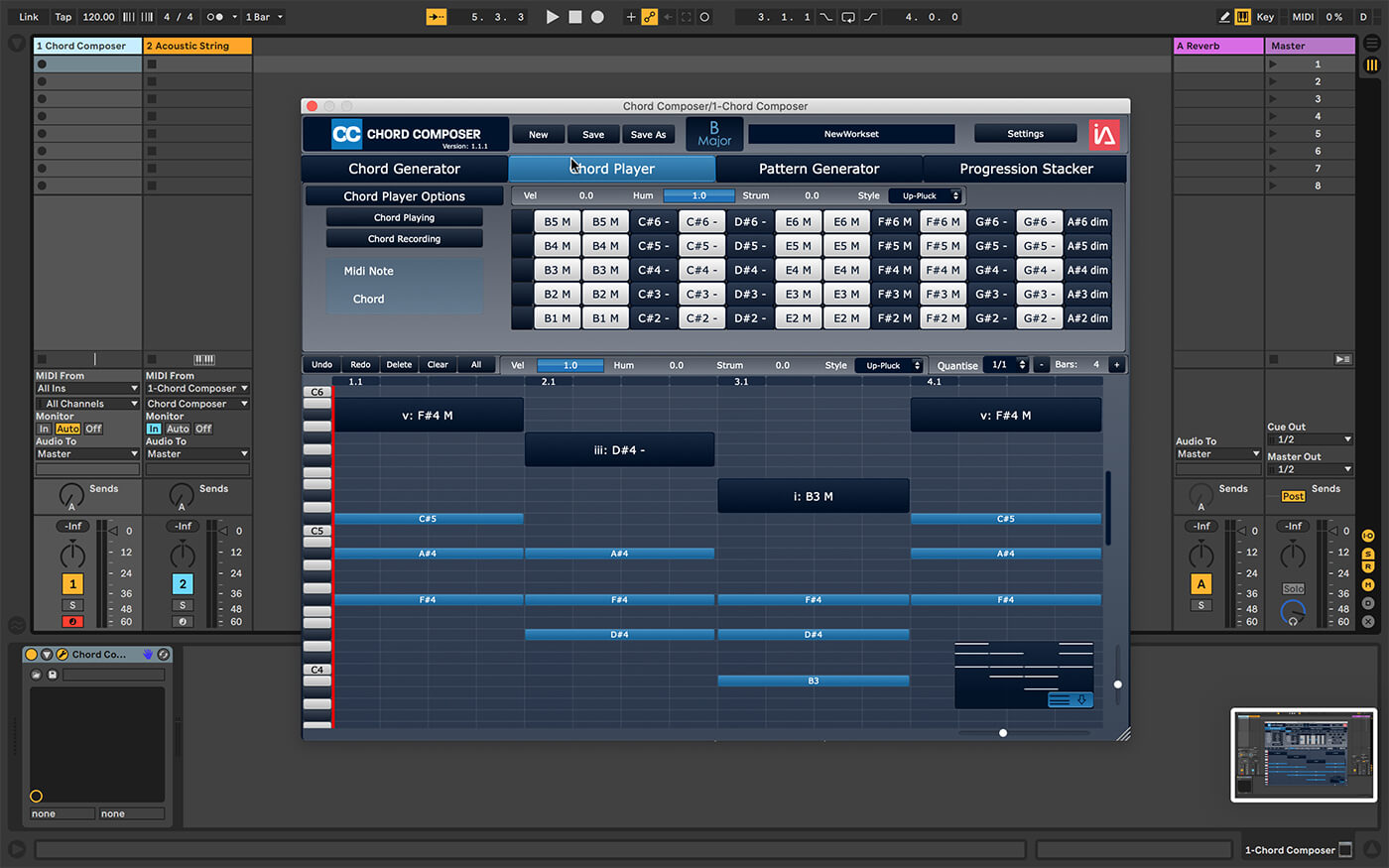 Next in line is the Chord Player section, more focused on real-time playing (I always get a cheap thrill from one-finger chord playing). Once again, chords can be recorded, configured and fired from here, but I recommend connecting a keyboard or pad controller to make the most of it, as you can make adjustments based on velocity, humanisation (controlled randomisation of velocity) and strumming intensity and direction; great if you’re working on stringed instrument sounds, such as those in Ableton’s Collision Device.

The Chord Player and Chord Generator sections both display a central Chord Matrix, which shows the notes in the chord you’re currently creating. The Pattern Generator is where to work with the timing of chord progressions, defining pattern characteristics with a useful visual block-based interface. Not only can chords be edited and re-organised, you can apply and visualise strums, and increase or decrease the progression length from the default 4 bars.

In the Progression Stacker, it’s possible to chain together a series of progressions, and dynamically switch between them. Any time there’s any content visible in the sequencer, a small overview is visible at the lower right. You can simply click on this to drag the current chords into a MIDI track in your DAW, where they’ll appear as a new MIDI clip. This works fine in Ableton Live 10 and there’s no need for any clunky export, conversion, or re-importing.

It proved easy to get going with Chord Composer at a basic level (it helped that during the review period, Intuitive Audio reinstated the PDF manual included with the software download, which was welcome, although still a bit light). If you already know your way around chords, musical theory and progressions, I’d recommend that you jump straight in and use Chord Composer as a library-building resource for your next project, in which you can store your favourite progressions.

For anybody who’s not already musically literate, there could be some confusion about exactly what’s happening with the progressions and choice of chords, so there’ll be more of a useful learning curve. In the meantime, there’s always the randomisation options – use them to open those doors you might never dream of opening otherwise. 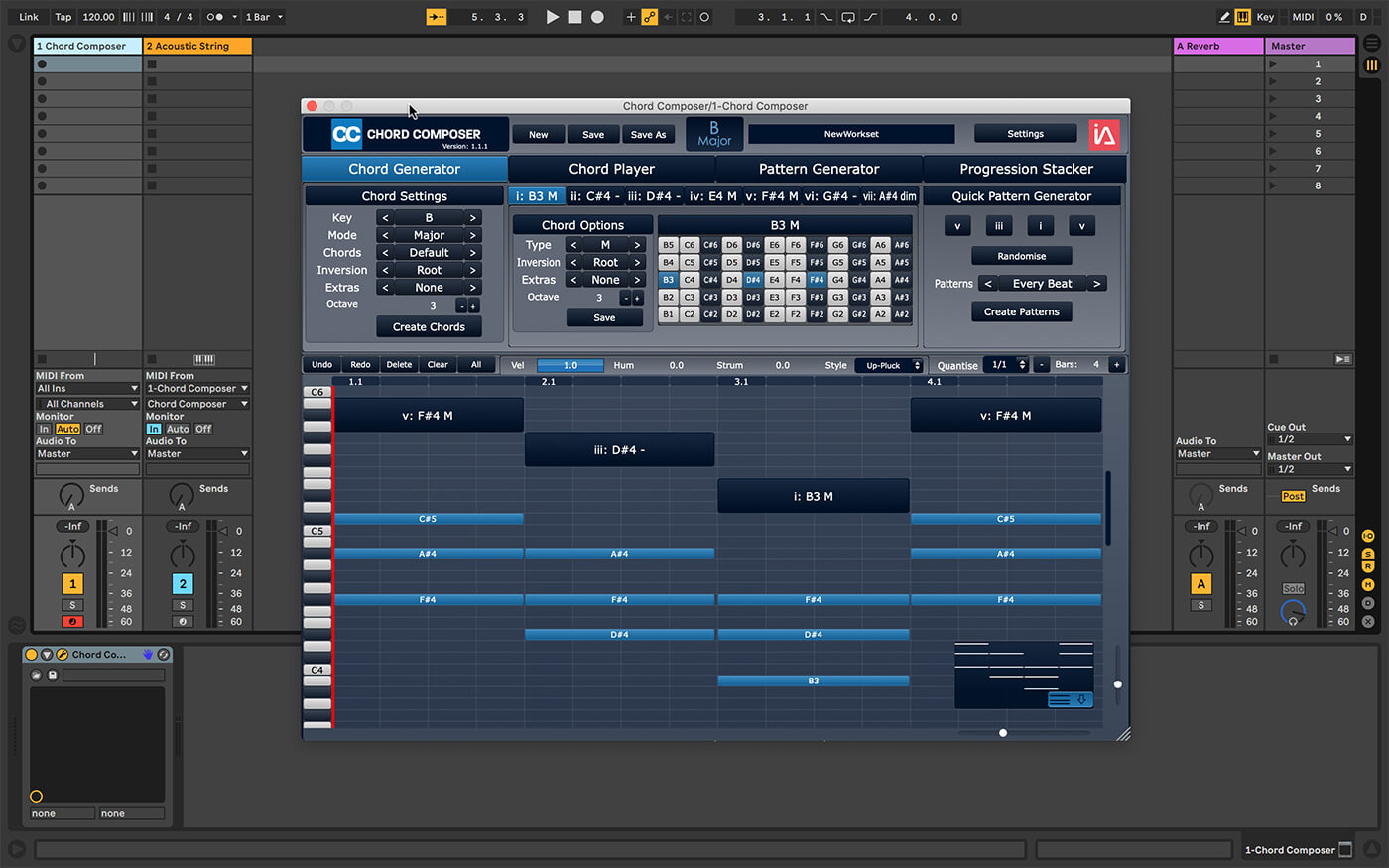 Chord Composer is versatile – being a plug-in, it’s not tied to any particular platform, and for very little coin it will add new realms to your MIDI performances and compositions. If you’re a fan of MIDI effect plug-ins like the ones in Logic Pro X and Ableton Live, you can think of this as a more sophisticated take on one of those. Maybe you’re new to composition and arrangement, and in need of a quick leg-up, so you can learn as you create? Or maybe you’re an experienced musician or composer, looking for habit-busting ways to come up with different parts? Either way, Chord Composer is massively useful, and well worth the time it’ll take to download the demo and check it out. 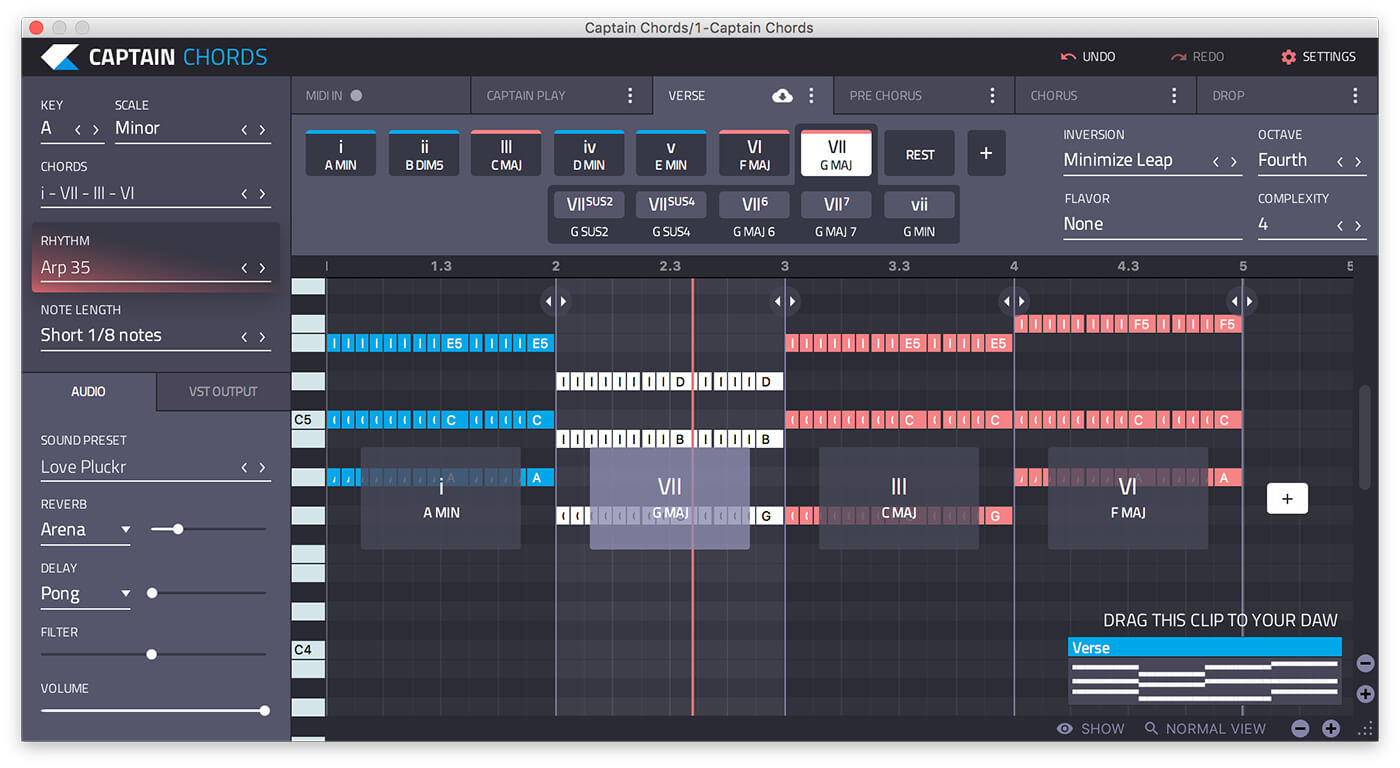 Included with the Captain Plugins bundle, Captain Chords allows you to create chords and chord progressions with a library of rhythms. Check out the Space Knob, which is a note length control that includes eight different presets; and Captain Play, an enhanced way of using the computer keyboard to play chords. 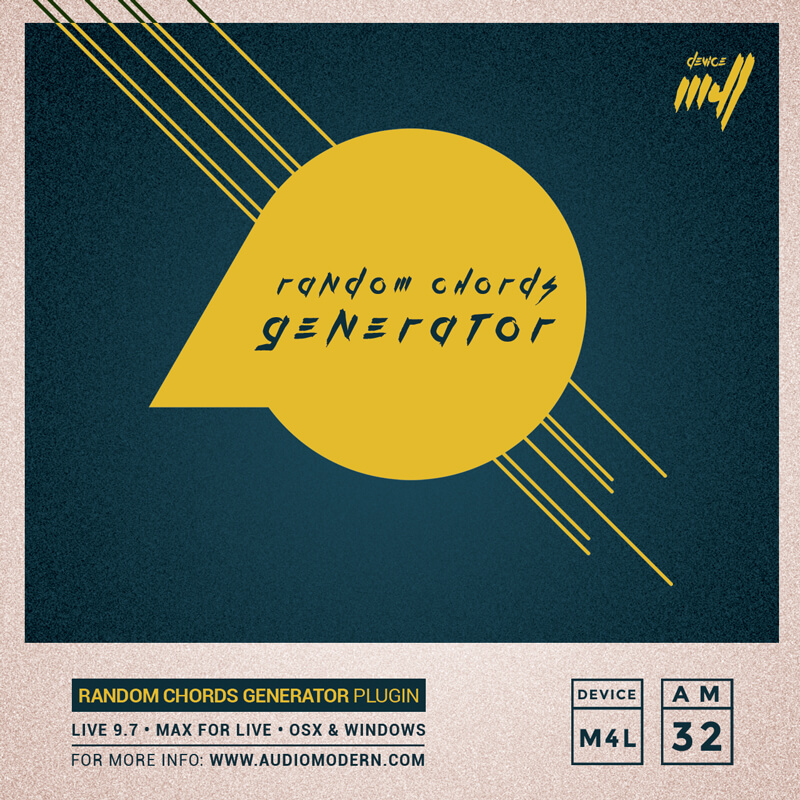 This is a Max For Live plug-in that’s a bit different from Chord Composer or Captain Chords, because it’s entirely about randomisation – hence the cool dice graphic on the plug-in. Results can be fully randomised, or parameters edited to tweak the results. 52 chord types are available.