With a proven track record to date, can Zynaptiq work its voodoo magic again with this latest release? Our Liam O’Mullane tries it out   Price €372  Contact via website  Web www.zynaptiq.com Amazon.co.uk Widgets The advent of digital has been both a positive and negative force in the music industry. On one hand, it offered a […] 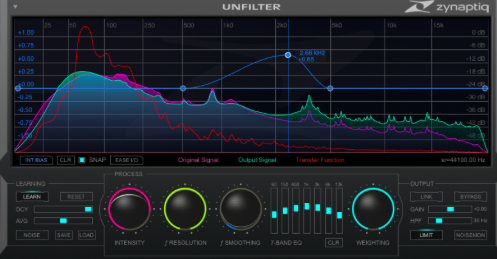 With a proven track record to date, can Zynaptiq work its voodoo magic again with this latest release? Our Liam O’Mullane tries it out 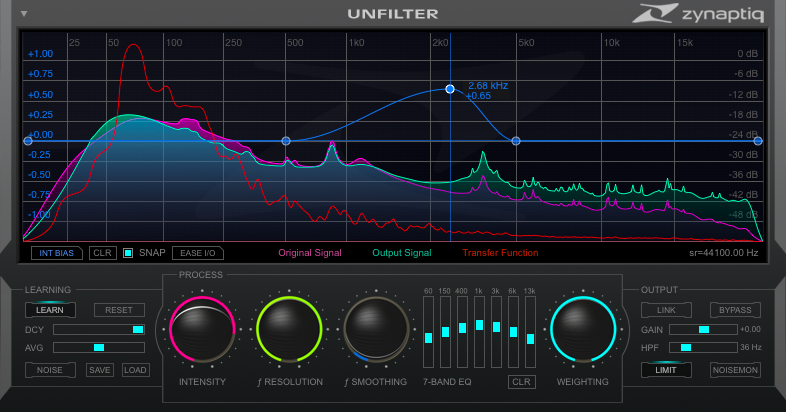 The advent of digital has been both a positive and negative force in the music industry. On one hand, it offered a new level of clarity and dynamic range when first introduced, but it has also been responsible for the more ‘smashed’ sound that has characterised various genres in modern times.  A recent saving grace for the reputation of digital is its ability to challenge the rules of what can and can’t be done – polyphonic pitch manipulation of a pre-mixed audio file being one. Both Celemony’s Melodyne and Zynaptiq’s PITCHMAP can do this, and when first announced everyone thought it was snake oil, but they have both since proved that some rules can indeed be broken.

Although Celemony’s efforts are fantastic, Zynaptiq hasn’t stopped there – we’ve already reviewed the company’s UNVEIL plug-in, which enables you to remove or reduce the amount of reverb in a pre-mixed file. This was another task we all thought couldn’t be done until Zynaptiq proved us wrong, and although UNFILTER may not sound as revolutionary as the previous two releases, it does offer new ways to approach audio processing.

Mix and Match
Many of us will have tried to make a bad      recording sound good or match one recorded mic signal with another when necessary through broad or narrow additive or subtractive EQ work. Of course, it’s always better to get it right at source and when possible re-record the signal, but this isn’t always an option for a variety of reasons: the performance may have been a one-off, or so good that you can’t possible recapture the vibe. The sound source may also be a sample, meaning you’re definitely stuck with what you’ve got. So whether you’ve got a sub-par piece of dialogue, a poorly mic’ed signal with comb filtering or audio that’s less than ideal due to being ripped from the internet, UNFILTER could be the tool to help get you a more full-bodied sound.

Filter Fun
Like UNVEIL, the bread-and-butter controls of UNFILTER are in the Process section, depicted by iconic Zynaptiq trackball-style faders. These remain easy to adjust while taking up less GUI space than traditional sliders.

The main graphical display shows a few different pieces of information: input signal, output signal and transfer function, all shown via a spectral shape to indicate what is going on as you work. These really help you understand how the ‘unfiltering’ process works.

A Learn section analyses the incoming audio to estimate what filtering has been applied to the original signal. It then creates a Transfer Function shape to undo it. This is also quite easy to grasp thanks to the graphical display feedback as the Transfer Function changes shape in front of your eyes.

A click-and-shape EQ curve sits over this display which can be used in the regular manner to re-balance the frequency content of the original sound. Alternatively, it can be used as a bias control to direct the focus of the Transfer Function. This is key to focusing on where new information needs to be added to restore heavily filtered sounds.

Magic Moves
Once installed, we jumped in at the deep end and tried the most extreme unfiltering you can think of: a low-pass-filtered breakbeat with no higher-mid information, just thuds from the kick, snare and hi-hat. We filtered this ourselves so we knew what the original should sound like.

After some experimenting with the Learn function to ensure it dynamically followed the drum parts in real time, we achieved a very close approximation of the full break before filtering. Even the higher-end character of the kick, snare and hi-hat were accurately emulated, which is an incredible feat. We tried it on all manner of sub-par dialogue and instrument recordings and achieved full-bodied tones without noticeable side effects until pushed to extremes.

In general, the tonal quality of UNFILTER is its second charm, alongside its ability to fabricate large chunks of missing frequency information. This opens up many new options for repair and creative EQ work across a broad range of disciplines.

Another unique processor is born. Useful for less sexy tidy-up jobs and those who want to explore new sonic possibilities.