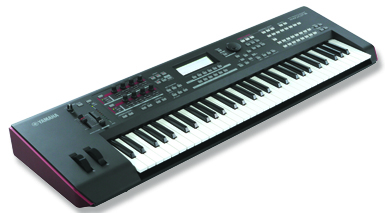 Yamaha’s latest synth packs the best bits from its MOTIF range into a more affordable package. Andy Jones has the keys… 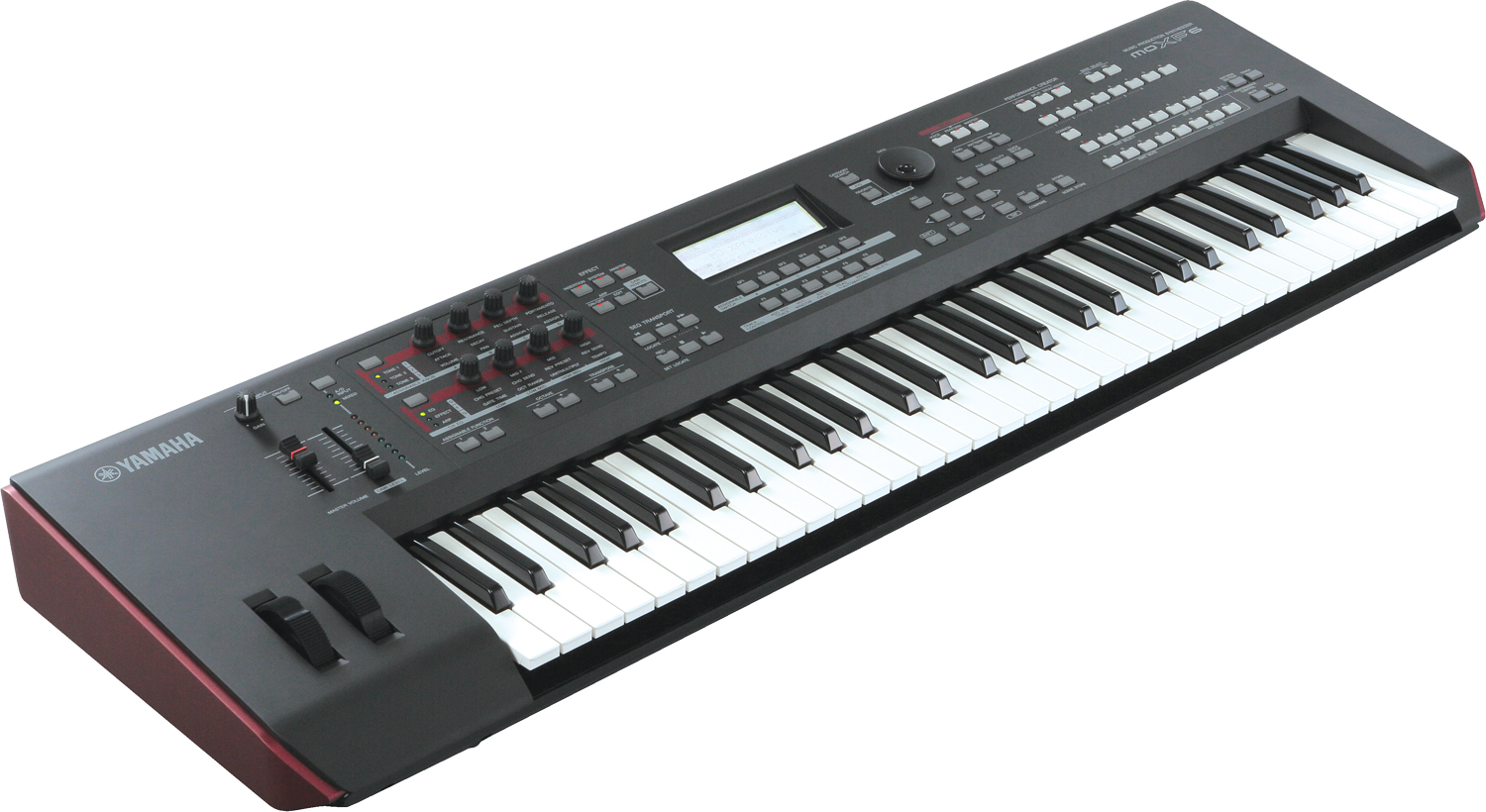 The modern keyboard ‘do-it-all’ workstation was born with the Roland D-20. OK, some may argue otherwise, but that’s what I say, basically because I rather foolishly blew half of my student grant on one back in 1988 – and I’m still trying to mentally justify that action. It was (OK, one of) the first keyboards to combine a sequencer, multitimbrality (so you could play up to eight different sounds together; nine including beats), effects and polyphony – and it was great.

Things have moved on, though, and today’s workstations are like alien technologies by comparison. Yamaha is now one of the leading players in the field. The Japanese giant must have been doing something right with its MO series as it’s been selling these – in one form or another – for well over a decade (see A Little MO history box for more). And that’s a decade that has seen software synths come and, for a while anyway, challenge hardware’s dominance in the area. Of course, now we seem to have reached a happy medium whereby hardware synths sit alongside the best of software. Indeed, the MOXF on test here – the latest incarnation of the synth workstation – is designed to do just that, because as well as working standalone it could also sit at the heart of your computer studio. 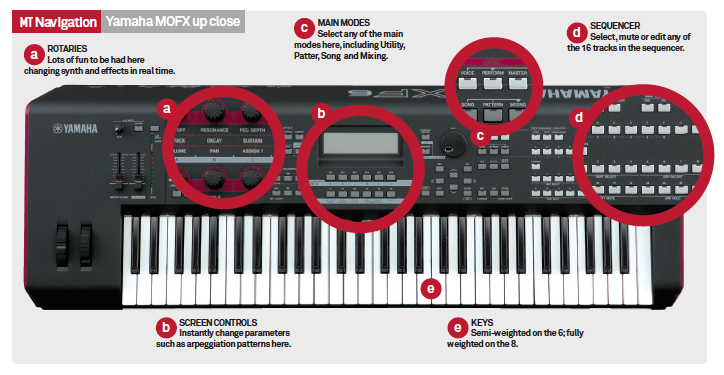 Best of Both Worlds?
The new MOXF range (the 6 on test here has 61 semi-weighted keys; the 8 has 88 fully weighted keys) is notable in that it has the MOTIF XF sound engine – ie, the top-of-the-range technology from the MOTIF range – plus optional Flash memory (up to 1GB) to load in your own sounds or some of the many available collections that have been released by Yamaha and third-party companies over the years (see Flash Extras box for more on this).

With USB audio and MIDI and the ability to control a supplied suite of software (including Steinberg’s Cubase AI 7 and Prologue synth VSTi), you quickly get the computer angle – this could be the one keyboard you need to slot in alongside your laptop. Or alternatively, stack up its onboard sequencer, effects, 16 parts of multitimbrality and massive 128 notes of polyphony and you could look at it as the ultimate in standalone hardware workstations. Mind you, things have certainly moved on since I spent that student grant…

The Engine
As we’ve already said, the heart of the synth is the XF engine, so you get 741MB to play with delivering 1,152 presets and 256 performances. That’s 136 more presets than the original, with more traditional piano and orchestral sounds alongside more modern hip hop sounds. Also included are re-creations of two classic Yamaha pianos (a CFIIIS and an S6), so there should be plenty on offer here for both traditional keyboard players and synth-heads. So let’s have a listen…

The presets are split across a mighty nine banks – 128 per bank. We start with Keys and all of the expected and impressive pianos – acoustic, electric, you name it. There are some great nods to Yamaha classics, with lots of DX and the odd TX-based presets plus some fine, swirling organs and distorted keyboards, too.

The organs continue into Bank 2, which switches to a percussive theme with some incredibly clean and punchy bells and world instruments before a super-impressive set of guitar presets that go from crisp acoustic to heavy electric over the course of about 90 presets, with the latter often bringing in more distortion as you hit the keys harder. The basses in Bank 3 move similarly from acoustic to electric before hitting synthetic, with the likes of a wonderfully fat Chill Out Bass preset through some surprisingly gnarly acid basses – several assigned to arpeggiations – and some impressively fat dance basses. The assignable knobs to the right of the screen come into their own here, with the first two automatically assigned to filter cutoff and resonance for any more dramatic squealing you might require. 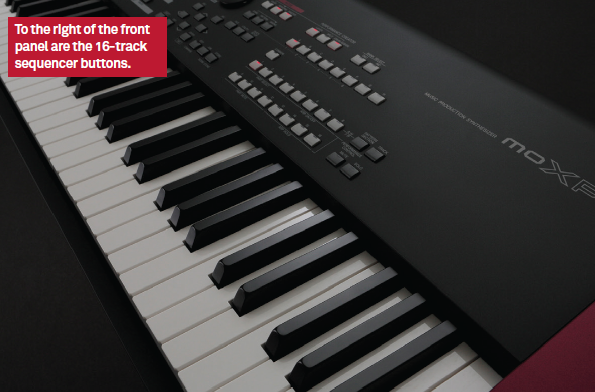 The strings in Bank 4 maintain the ‘acoustic first, synthetic last’ theme and here’s where the 128 notes of polyphony might come into play – indeed, I managed to build up a fairly convincing orchestral piece pretty quickly by stacking up several of the more traditional presets. Again, with Yamaha’s synth pedigree you’d expect greatness in the synth strings department and you won’t be disappointed. I usually absolutely hate to see a keyboard of this kind of power attempt brass and wind as they usually fail hands-down, but even some of the French horns did the job for me, and it’s rare you’ll read that.

Moving swiftly on, the synth, leads and pads are again unsurprisingly great and pretty much every single one of them utilises the onboard effects for even more power. Several of these had me stopping in my tracks on this epic preset journey and hitting record.

We’re only up to Bank 7 and have already hit a pretty epic sound-effects section. I’m starting to wonder what’s left – haven’t we pretty much covered everything? Well, there’s a large selection of very usable synth-like presets here, some with a lot of movement, then there’s a smaller set of world sounds before drums and percussion loops take over.

This is an interesting section in terms of how creative you can suddenly get. Beats are a very personal thing and I’d not particularly like to use a keyboard-based set of loops unless I’d somehow made them my own first, and here you have plenty to do just that. The loops are produced with the arpeggiator, so simply stepping through the SF1 to SF6 keys beneath the screen will change the pattern for some dramatically different results. But that is just the start of it…

We’ve already hinted at how good the onboard effects are. The engine is worthy of a special mention as it includes Yamaha’s Virtual Circuit Modeling, which enables the emulation of classic gear – including EQs and compressors – down to component level. When used here in conjunction with the beats you can get some exceptional loops going and easily make what is supplied your very own. 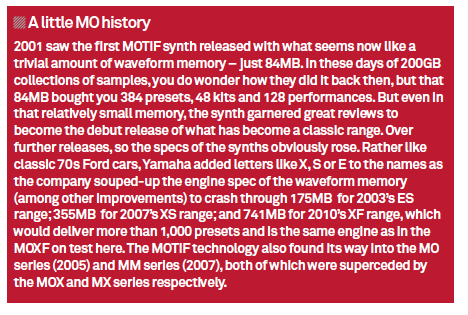 Turn to the second set of knobs to the left of the screen and you get four rotaries to control EQ, Effect and Arpeggiator parameters. Obviously, EQ adjustments can help to make beats stand out, but the effect parameters – chorus and reverb presets plus send amounts – can be even more dramatic. The arpeggiator parameters include gate time and tempo, so as well as instantly flipping between patterns as we did earlier, you can get even more involved to change loops – but we’re still not done!

Again, as we have already demonstrated, the other four knobs control filter and envelope parameters, and with beats these are very effective to really scrunch-up loops and generally add dirt. One criticism with keyboards like this is that their sound sets can be a little ‘safe’, but there is simply so much on offer with MOXF you do literally get something for everyone, and for those who do say it’s all too clean, think on – there is certainly enough real-time synthetic control and effects to beef things up, tear them down or just generally get in-there and shake things up a lot – and it’s all impressively simple to do. 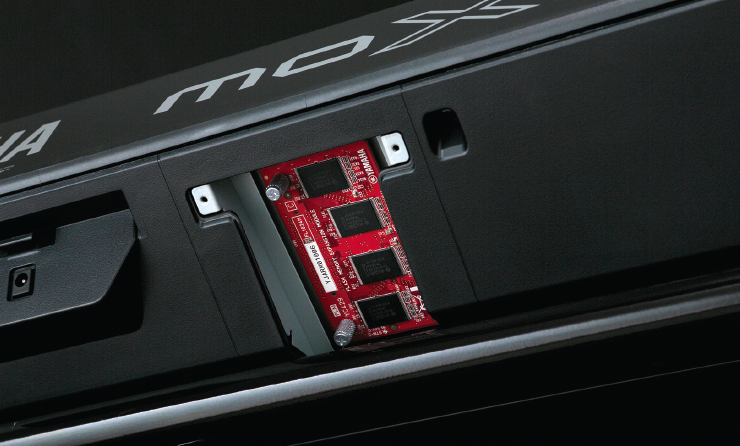 Modes
OK, I’ve spent far too long chatting about the sounds, but there are over a thousand, so forgive me! Turning to the main structure of the synth, you work in several modes. The first, Voice, we’ve dealt with – within it you are just playing the many sounds on offer. Performance mode is like any other – it lets you combine patches or split them across the keyboard and this is done quite easily and quickly in the Performance Creator section. Master allows you to perform some functions on a more global level, such as splitting the keyboard into four or transferring or saving favourite settings. The Pattern, Song and Mixing modes are all for putting together tunes in the sequencer section – more on this later.

Other modes of note include Utility, which is an overall settings mode to enable you to change things like overall volume levels and the DAW you are controlling, which leads nicely to the DAW Remote mode. As Yamaha claims that the MOXF sits well in a computer-based studio, let’s give it a go… 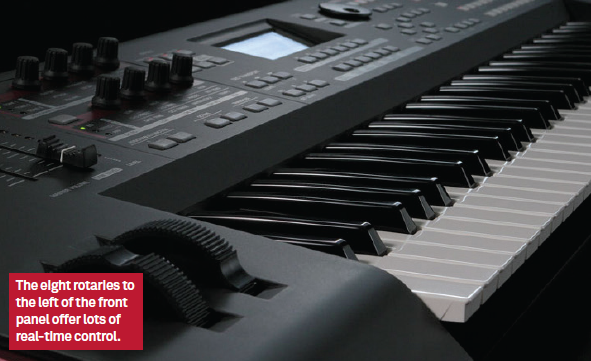 Yamaha owns Steinberg, so understandably the keyboard works almost automatically with Cubase – simply install the supplied Remote Tools software and the two will happily talk to each other. With all DAWs you will have to download the latest Yamaha Steinberg USB driver and install it before you can get going.

Out of the box, MOXF can control Cubase, Logic Pro, Digital Performer and Sonar. With Logic, which we tried it with, you have to choose the Mackie Control template or install it from scratch from the supplied templates in Logic and then set your output and input ports to MOXF6 Port2. We got it working pretty well with Logic Pro 9 but had only limited success with Pro X (which I suspect might be solved by an update from either party). And while the keyboard can control your DAW and soft instruments, I’m not sure this is where its true strength lies. There simply aren’t enough faders, for example, on the front panel to control a software mixer with any great flexibility.

The sequencer, though, is a lot of fun. You can compose by pattern arrangement – where you arrange patterns of up to 256 measures together – or program a song by step recording, where you input the notes one event at a time. My favoured method, though, is to record in real time over the 16 supplied tracks (like an audio multitrack recording only with MIDI events).

You hit the Rec button in Song mode, choose your sound (and there’s a rather good search facility to help hone in on the types of sound you require), hit F5 to put the metronome on and play to start recording. You end up moving around the keyboard a lot and I wonder if the transport controls might have been better placed nearer to the main Mode keys, but I guess they have to go somewhere and not everything can be together. Once I’d played a couple of tracks, though, I was soon moving faster around the front panel.

Editing is quite easy, although only MIDI events are shown – no dragging piano-roll events with a mouse here. The mixer part is a breeze, mind – you simply hit Mixing mode and all 16 channels are show. Use the cursors to navigate to pan and level controls and the main data dial to edit values.

Conclusion
Even though I’ve spent a lot of time with MOXF6, I really feel the need to spend longer with it simply because there is so much going on. Any MOTIF lover will probably jump at the chance to get a machine with this spec for the lower price. And if you need a great sound source that covers just about every base and with a lot of scope to edit on-the-fly and create all-new sounds, look no further. I can easily see this used as a standalone composing tool, say, while a band is touring and then blending those ideas into their recording setups when they get back – in fact, Cubase users can easily transfer MOXF songs into Cubase.

I’ve come from a workstation background and would urge anyone to explore the one-box-does-everything approach and this is a massive leap from where I started with it. I did leave the workstation behind when I got my first computer setup and always thought I’d never be tempted back – but MOXF has made me think again!

With MOXF, Yamaha has done a cracking job at updating and integrating the workstation for today’s studio – create tunes standalone or with your computer, your choice. 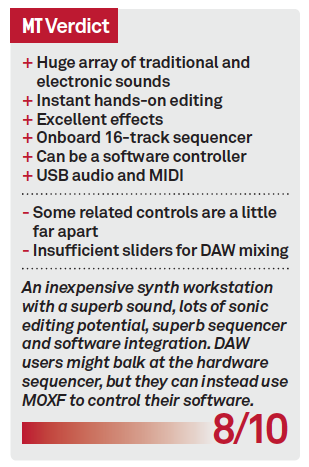