In the concluding part of our exclusive review of Yamaha’s Montage, Andy Jones assesses it’s place in the synth-pantheon… To Sum Up So far then, what do we have? Two massive engines and stacks of sounds; loads of hands-on controllers, including Super Knob that can be assigned to pretty much any sound parameter; 16 sounds per […]

In the concluding part of our exclusive review of Yamaha’s Montage, Andy Jones assesses it’s place in the synth-pantheon…

To Sum Up
So far then, what do we have? Two massive engines and stacks of sounds; loads of hands-on controllers, including Super Knob that can be assigned to pretty much any sound parameter; 16 sounds per performance, each of which can have four lanes of Motion Sequencing allowing for lots of dynamic changes; huge Live Sets that comprise different performances for live play; eight Scenes that can be variations of performances; plus, a scratchpad sequencer, which I’ve not touched upon, nor have I even mentioned the keyboard’s effects, Envelope Follower – see above – nor the Utility features… 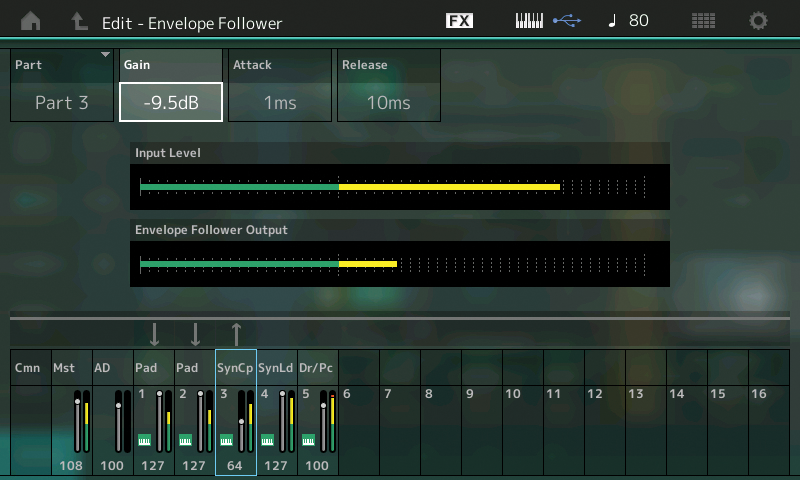 Montage’s Envelope Follower analyses the analogue inputs to measure the tempo of an external signal. These could be drums or vocals which it can then sync to Montage’s internal arpeggiator. The synth can therefore sync to any band member – yes, even your drummer…

So, by now, you’ll be clear that we have a synth that does pretty much everything you’ll want it to and a stack more if you need it. So are there any drawbacks? Well, yes, but in the grand scheme of things, let’s call them niggles. The biggest for me is probably a lack of outputs. This is a synth with so much power and so much in the way of sonic capabilities, I’d want to let the world know with as many ways to connect to that outside world as possible.

The rest of my points are the niggles. There is a delay between dialling up stuff on the screen and it coming through your speakers. Of course there is; the system is playing catch up with a very fast way of accessing sounds.

Because of it, though, you might also go too far beyond your chosen sound or parameter as you dial or increment, so don’t get too excited when selecting sounds or performances.

Having said that, I found some incredible performances during my random tour because of this, ones I might not have otherwise considered, so maybe a little less hand holding like this should be encouraged. Besides, using the Category Search function for performances and the button category search for parts negates this anyway.

Finally, I guess another drawback of Montage is it does almost too much. I do mean this in the nicest possible way, as it’s rare that I’ve written so much on something but still feel I’ve barely scratched the surface.

This surely means the synth is bound to be hard to get your head around completely, right? Sometimes, yes, as there are potentially layers and layers to this thing, but on a general level, it’s surprisingly easy to navigate around.

I also suspect that if you’re going to pay over two grand for a keyboard, you’re not going to mind spending a little bit of time, or even a lot of time, reading the manual to get the best out of it. 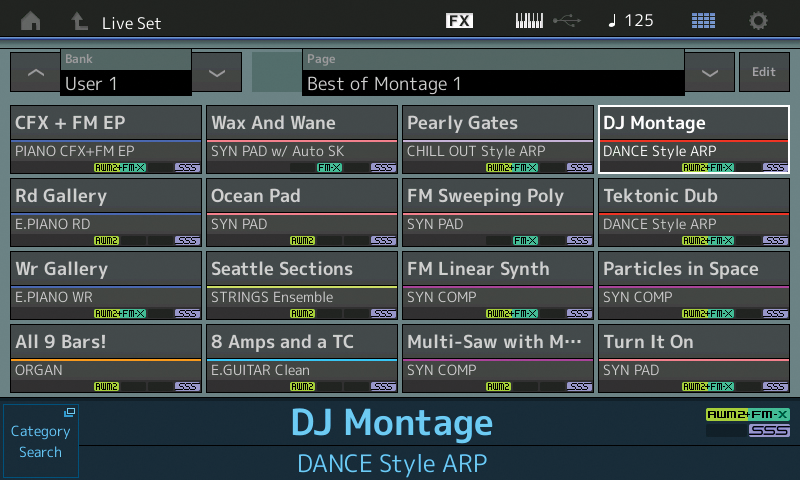 Live Sets are basically sets of performances that you can dial up at the touch of a button. Note that the type of synthesis that each uses is displayed in green (two types: AWM and FM) and the purple ‘SSS’ indicates whether Seamless Sound Switching is present in the performance

Alternatives
As the world goes analogue and retro mad, the number of synths that Montage competes with goes down. There are, however, still some big digital synths around from the likes of Roland and Korg. The Roland FA-06 was one that I looked at 18 months ago now, and is something of a pinnacle of workstation synthesis.

This workstation philosophy is actually something Montage steers clear of, but both keyboards do share a similar sound mantra. The Korg Kronos is a keyboard I’ve not looked at, but again is certainly up there in terms of flexibility and is, again, more of a workstation. Somewhat bizarrely, you may initially think, I’m wondering if NI’s Komplete Kontrol and Komplete Ultimate might be more of an alternative for potential Montage buyers.

Yes, NI’s system is more software-based, but in terms of the breadth of sounds it delivers, it is on a par with Montage. And with its great touch screen, Montage really does offer a computerless-type experience, in that you’ll spend more time on that screen than you will with your DAW. In this respect then, maybe opt for the 88-note S-Series Komplete Kontrol keyboard and Komplete Ultimate. Both still come in cheaper, but do offer a vast sound pool.

Conclusions
Montage is a triumph in so many ways. How could Yamaha manage to update MOTIF and produce something which the range didn’t already have covered?

Well, the company has taken that concept – a cover-all keyboard for everyone gigging and recording – and added some surprising and successful twists. Bringing FM into the equation is a stroke of genius, especially with the way it’s implemented with so much power. But my absolute favourite feature is the Motion Control Sequencer.

You will have to get your head around it to get the best from it, but it can take your efforts into sonic areas that will surprise and delight you, and areas you may not have considered. Tools and options are here that don’t exist in other places, and with so many at your disposal, you will come up with sound designs that others haven’t, simple as that.

The other real beauty of Montage is the level of control. Not just in the obvious Super Knob; yes it works, yes it looks good, but Yamaha has retained the simple grid-and-dial system from MOTIF – a clever move – and combined it with a screen that is simply glorious.

I keep going on about how NI’s Komplete Kontrol and inMusic’s VIP software enable you to turn away from your computer to concentrate on the music.

Well, the same holds true with Montage, but in a slightly different way. While your computer will still be there for its DAW duties, the screen and control combo almost makes anything else redundant. It breaks down the barriers between hardware and software in a different way to VIP and KK, as it’s like having your computer in your keyboard – it really is that well implemented and opens up the keyboard architecture that well. Bottom line? Montage is the mother of all synths: climb on board.