Few techniques or inventions can lay claim to shaping a sound that’s all their own, but the Copicat can and did… John Pickford has the story. A 1961 Copicat (above) and a later Mk4 unit below, which saw the Copicat’s popularity reach its peak in terms of numbers produced. Images: Reg Godwin www.watkinsguitars.co.uk and www.harris-hire.co.uk […] 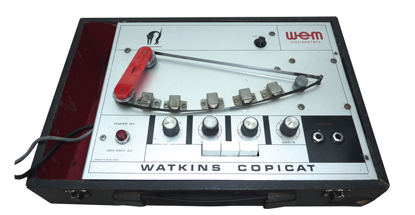 Few techniques or inventions can lay claim to shaping a sound that’s all their own, but the Copicat can and did… John Pickford has the story. 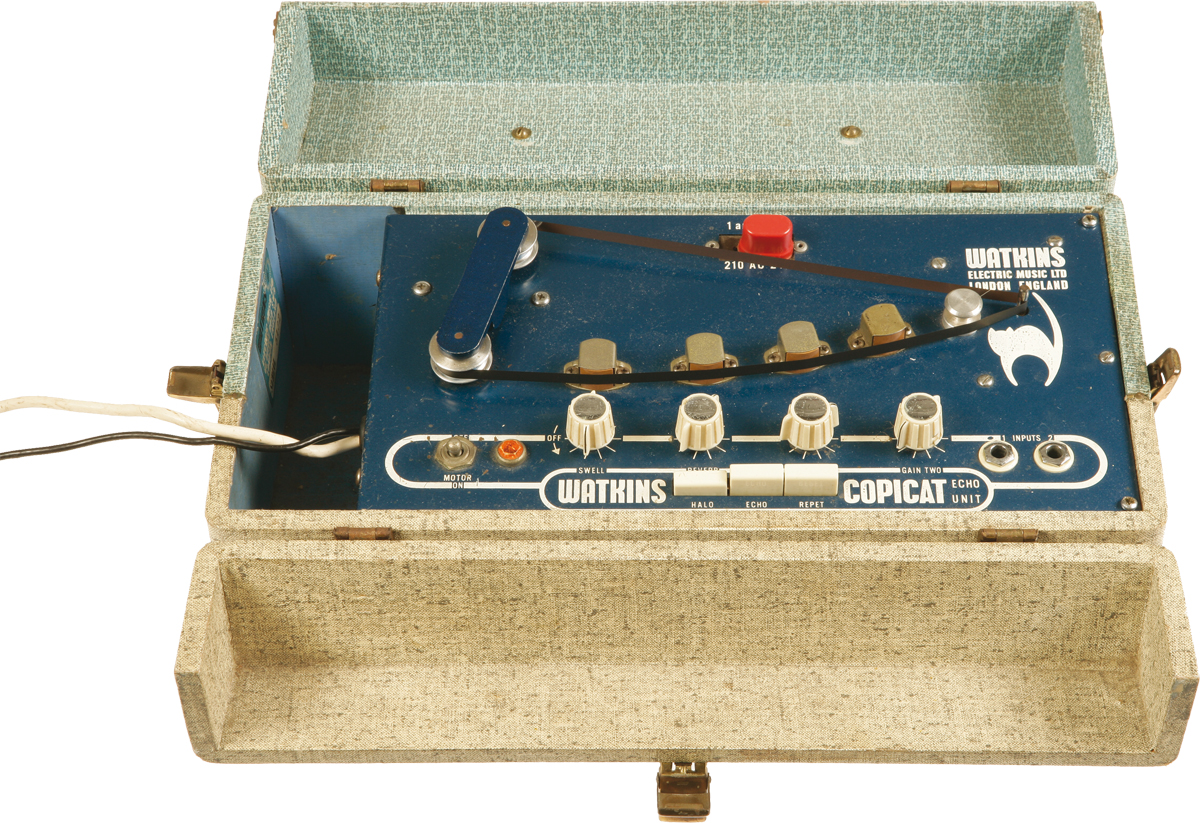 A 1961 Copicat (above) and a later Mk4 unit below, which saw the Copicat’s popularity reach its peak in terms of numbers produced. Images: Reg Godwin www.watkinsguitars.co.uk and www.harris-hire.co.uk 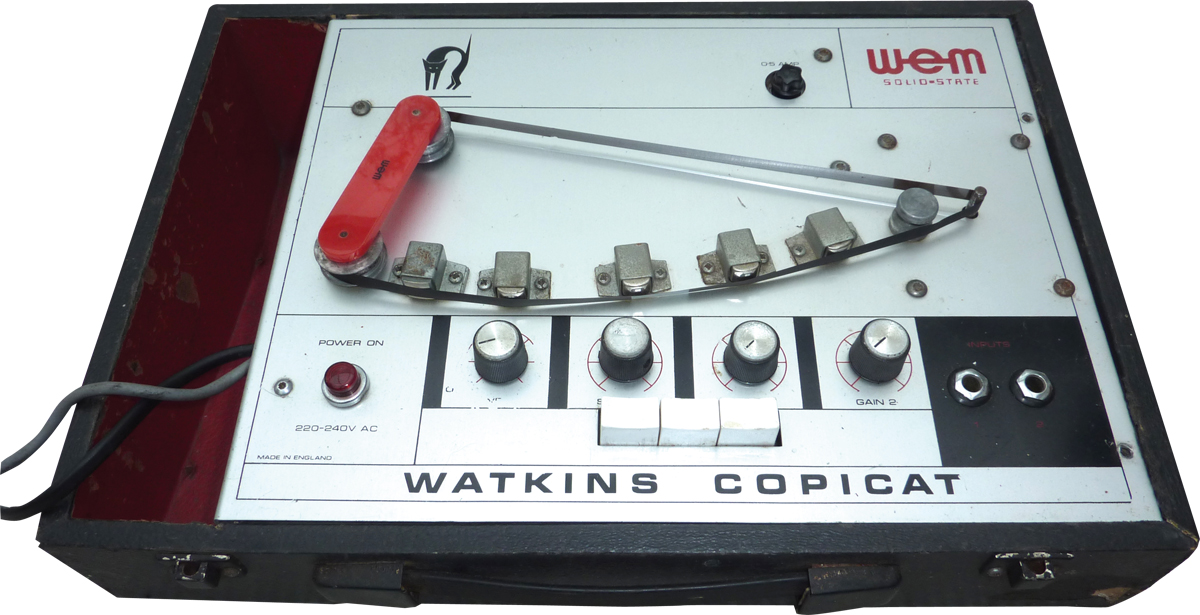 During the first summer of the Swinging Sixties, a strange, exotic sound could be heard blasting out from the jukeboxes of the nation’s ‘frothy coffee’ cafés. It started with two bars of Cherokee tom-tom before a resonant, twangy riff heralded a new sound for the new decade. That sound was the first chart-topping hit for The Shadows – Apache – and it had been created using three key ingredients: a Fender Stratocaster, a Vox AC30 and, crucially, the Watkins Copicat.

The Copicat was (and indeed still is, as it remains in production today) a tape echo machine. Primarily designed for use with electric guitar, it soon became a fixture in studios around the world. There is some confusion as to when the Copicat was first made available to the public – its designer, Charlie Watkins, insists it was 1958, although other experts believe an early 1960 release to be more likely. The first music press advert for the Copicat appeared in Melody Maker in September 1960, just as Apache was ending its five-week run at the top of the charts. The first 100 units that Watkins made sold out on the first day, with people queueing outside the Watkins Electric Music (WEM) shop to obtain one.

WEM was formed in 1949 by Charlie Watkins and his brother, Reg. The venture was initially a record shop, but they soon began selling guitars and other instruments. Charlie got the idea for a tape echo machine after hearing the effect in a studio, where several professional tape recorders had been hooked up to produce multiple repeat echo. Watkins thought it would be a pretty neat trick if he could reproduce the effect in a single, portable box – and with the use of three tape-record heads, he did just that.

A single loop of tape, driven by a motor, passed over the record heads, giving three preset tape-delay times, selectable by means of three push-buttons. The first gave a very fast slap-back-style echo; the other settings gave longer repeat times. These could be selected individually or any combination of the three could be brought into service. A rotary pot labelled Sustain (but named Reverb on some later models) controlled the number of echo repeats, while the Echo pot (Swell on later models) controlled the echo volume. Two further pots provided gain control for two instrument or mic inputs. 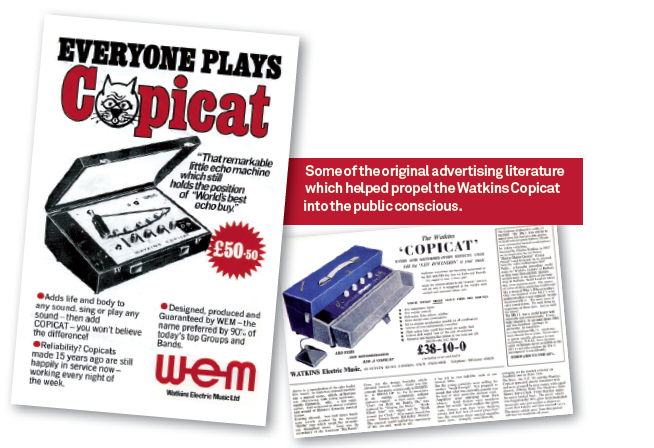 Once the tape had passed over the record heads the sound was erased by magnets – a simple but effective arrangement.

Early machines made use of valves (two ECC83s and a 6BR8) but from 1965 solid-state (transistor) technology was implemented. The early valve-based units are the most desirable and many users attest to their sonic supremacy, but Charlie Watkins maintains that solid-state designs are better due to improved stability. These transistorised Copicats (generally known as the MK IV) were the biggest-selling of all Copicat variants and hundreds of thousands were produced.

WEM also built Copicats into some of its guitar amps – such as the 30W Powercat from the mid 60s – and in 1975 launched the Halle Cat, which combined the Copicat with a four-channel mixer. This unit proved to be unsuccessful, largely due to its high price (£250 compared to the £76 being asked for the standard Mk4). Many other Copicat variants have appeared over the years including budget and premium designs, some employing digital technology.

Currently available is the Copicat Gold, a programmable unit that re-creates the sounds of Copicats throughout the years as well as mimicking the sounds of other tape echo machines, such as the classic Binson, Meazzi and Space Echo units.

Although the Copicat sound is arguably most famously associated with those Shadows records from the early 60s, it enjoyed a second wind in the psychedelic era of the late 60s and later found favour with creators of dub reggae. The Copicat has earned its place in history for being the first portable tape echo machine, making one of the most basic audio effects readily available to musicians and sound recordists alike.