The Rocket is the latest mini-synth to emerge from the acclaimed Waldorf stable. Alex Holmes takes it for a test-flight in this review of the Waldorf Rocket Details Price £199 Contact Hand in Hand 01752 696633 Web www.waldorfmusic.de Can there ever be too many hardware synths? We would argue no, although it seems as though everyone is […]

The Rocket is the latest mini-synth to emerge from the acclaimed Waldorf stable. Alex Holmes takes it for a test-flight in this review of the Waldorf Rocket 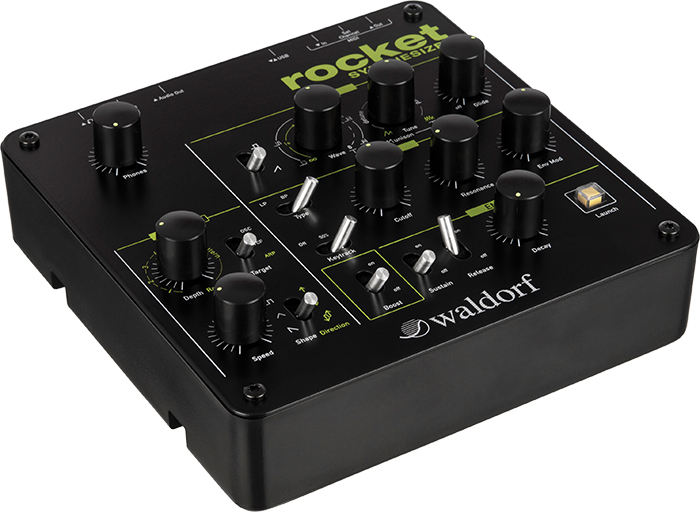 Can there ever be too many hardware synths? We would argue no, although it seems as though everyone is going mini-synth crazy at the moment. And the German synth experts at Waldorf are no exception, entering the fray with the compact Rocket Synthesizer. The Rocket has a digital oscillator (actually eight oscillators), which runs though a voltage-controlled, multi-mode analogue filter, and is housed in a sturdy plastic case with a metal faceplate.

Blast Off
The unit can be powered from the mains or via USB, which can also send and receive MIDI from your computer, but not audio. For that you have a slightly noisy 3.5mm headphone output with a dedicated volume control, plus a thankfully much cleaner 1/4-inch jack output. Slightly baffling is the lack of a volume knob for the main output, although how essential this is will depend on your setup. You also have a 1/4-inch input for processing mono signals through the tasty filter section, plus standard 5-pin MIDI I/O sockets. For modulation there’s an LFO with three shapes for affecting either the filter or the oscillator, plus a hidden LFO for vibrato that can be triggered with the mod wheel. There are also envelopes for the VCA and VCF, plus an envelope for the sync, which is ingeniously tucked into the oscillator section.

The analogue filter is a lovely beast, offering LP, BP and HP modes plus three settings for keyboard tracking. Particularly nice is how the LP mode retains low-end weight even at high Resonance settings. Other features include a Glide control – you have to play legato for this to work – a Boost on/off that adds analogue saturation after the filter, an arpeggiator with three directions, an octave control and several preset patterns, and a Launch button for triggering notes without a keyboard or sequencer plugged in.

Ground Control
Although the oscillator sounds a little pedestrian, it has a few tricks up its sleeve. There’s a Wave selector that enables you to choose from pulse or sawtooth shapes, plus multi-function Wave and Tune knobs. Set to pulse, the Wave knob will change the pulse width as it’s turned up to 12 o’clock, then begin to modulate the pulse width and depth as it’s turned further.

Similarly, with the sawtooth, the Wave knob works as an envelope for the Sync mode, whereby Tune selects the pitch of the second oscillator. Turning the Wave knob further brings additional oscillators into play – up to eight – for a big unison sound, with Tune adding thickness by detuning the extra layers.

Things get really exciting when you turn the Tune knob further to the right and the oscillators start to form stepped intervals, with increasingly more complex chords depending on how many layers are present. With both knobs at full you can actually play your own eight-finger chords (although this isn’t true polyphony as all notes use the same envelope). In practice this is fine as long as you press and release the keys at the same time, although you have to be fairly accurate otherwise you get other notes popping in. Even so, this is a fantastic feature.

Massive Attack
A criticism that many will level at the Rocket is its lack of attack on the envelope. Although this was a deliberate design decision, it reduces the sound-design possibilities, particularly being able to create pads using the layered chords. We also occasionally found the attack a little clicky and would have preferred a knob to dial in the perfect amount of saturation instead of just an on/off switch. Waldorf has now released a free app allowing you to tweak and play the synth from the iPad, as well as load and save presets. We assume and hope that this will also be made available soon for Mac and PC.

Small negatives aside, we had a whale of a time with the Rocket. Although the digital oscillators lack warmth, the excellent filter and saturation provide a bright and lively sound, and the well thought-out controls make live tweaking a joy.

The Rocket might be too limited for some, but innovative design and a lively sound make it great fun to use. The fact that you can play chords is an unexpected bonus.