Waldorf’s long-awaited follow-up to the Pulse is here, but does it deliver the same powerful sound? Alex Holmes delves inside…           Details Price £419 Contact Hand In Hand 01752 696633 Web www.waldorfmusic.de 2013 shall henceforth be known as the year of the synth, as we’ve seen a near endless stream of shiny new […] 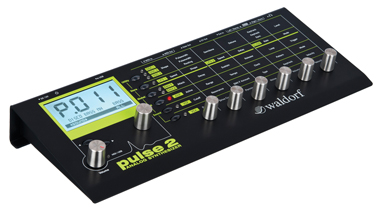 Waldorf’s long-awaited follow-up to the Pulse is here, but does it deliver the same powerful sound? Alex Holmes delves inside…

2013 shall henceforth be known as the year of the synth, as we’ve seen a near endless stream of shiny new units delivered to the MT office. Reviewing duties have mostly fallen to editor Andy and yours truly, with recent knob-twiddling time being spent on the Waldorf Rocket and the Korg Volca synths. Not long after we were won over by the Rocket’s tactile, hands-on controls, Waldorf is back with the long-awaited Pulse 2 analogue synthesizer. The rack-mountable Pulse 1 was released back in 1996, and was praised for its solid, powerful and upfront sound, but this time Waldorf has shrunk everything down to a slightly weighty but compact desktop unit housed in a sturdy metal casing.

Mini Me
Despite its size, the Pulse 2 is a feature-packed synth that could easily give the big boys a run for their money. It’s powered by a fairly small power supply and can be hooked up via MIDI, or accept MIDI via USB. At its heart, you’ll find three incredibly flexible analogue oscillators, each capable of playing different combinations of waves, including saw, square, triangle, PWM and APW (an ‘Alternate Pulse Wave’ with more constant energy and a sub an octave below). There are also four unison modes that play monophonic or polyphonic clusters of eight pulse oscillators, plus two paraphonic modes (as found on the Rocket, where chords can be played, but they share the same envelopes).

On top of this, you also have PWM cross-modulation for creating rich and complex sounds, oscillator sync and the ability to use osc 3 as a feedback loop or for an external audio signal. Just playing with the oscillators can yield a massive range of sounds that exceeds what most analogue mono synths are capable of. And although it can be tricky playing tight-sounding chords in paraphonic mode because of the shared envelopes, this is nonetheless a fantastic addition that opens up many possibilities from a music-writing perspective, which is what really counts.

Next up we have the multi-mode analogue filter with 24dB and 12dB low-pass, 12dB high-pass and band-pass modes for sculpting the sound. It’s a fairly robust filter that doesn’t lose too much girth when you crank the resonance, and it also goes into self-oscillation, which effectively adds a sine wave to your sonic arsenal.

Other features include two envelopes with different trigger and loop modes for the filter and amp, two LFOs (one with multiple sync’able shapes and one with just a triangle), plus glide with four modes. Finally, you can add a noise oscillator, control volume, velocity and pan, and feed the whole signal through either a tube or fuzz overdrive for added grit. Although this distortion is a nice addition from a sound-design perspective, we found it a little difficult to dial in the saturation sweet spot without losing some of the tasty analogue character. However, you can achieve a pleasing, more subtle distortion simply by raising the volume of the individual oscillators, which will in turn hit the filter a little harder. 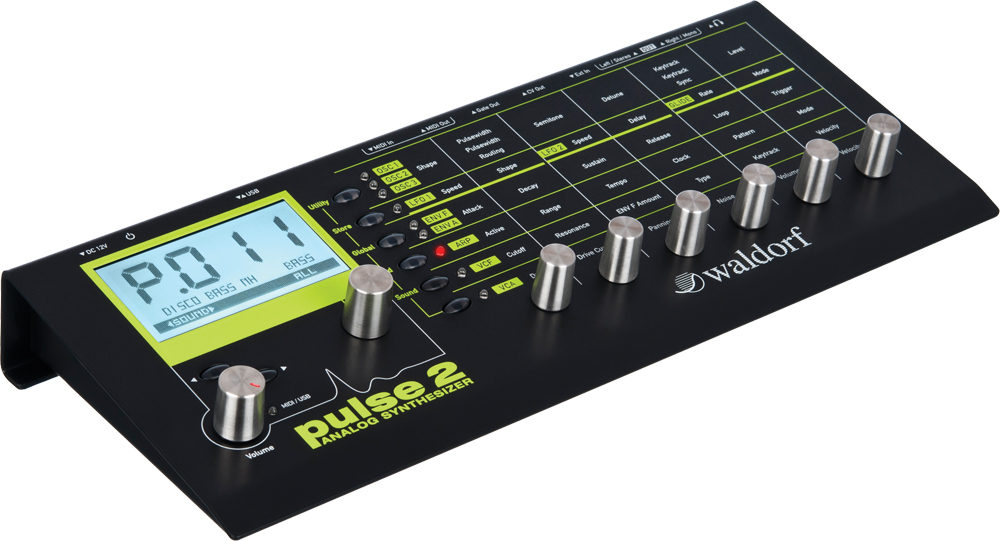 Pulse 2 squeezes into desktop dimensions, despite the many extra features

Enter the Matrix
Patch-creation is achieved on the front panel via a parameter matrix, with six buttons down the side and six stainless-steel knobs along the bottom. You also have a 128 x 64-character backlit LCD screen with a couple of extra knobs and buttons for output volume and navigation. It’s a bit of a shame that the majority of the screen is used to display a giant preset number rather than show more useful editing information à la Waldorf’s similarly-sized Blofeld synth, although there are a few exceptions to this that we’ll come to later.

The endless encoders have been cleverly programmed to move more quickly through the settings depending on the speed with which they’re turned, which is great for quick programming but not so great if you’re trying to perform accurate live filter sweeps and the like. You could, of course, hook up the synth to a MIDI controller if you’re looking to use it onstage.

Despite the lack of dedicated knobs, editing the Pulse 2 is fairly quick due to the logical layout, while a Shift button gives access to further global settings, editing, preset storing and utility pages. A modulation matrix page makes better use of the screen real-estate, with eight slots and a wealth of sources and destinations for building complex patches. There is also a software editor in the pipeline, which should speed things up significantly.

Perfect Patterns
One of the Pulse 2’s many aces up its sleeve is its comprehensive built-in arpeggiator, which thankfully also fills the screen with its many parameters. You have the usual control over tempo, beat division, range and direction mode via the main steel knobs, plus step duration, swing, delay and pattern length and a grid with glides and accents on the main screen.

This allows for some fairly complex patterns to be saved alongside your preset, which can then be recalled while working on other patches. In fact, the Pulse 2 has a total of 500 preset locations, with some of the best making excellent use of the arpeggiator. It can take a while to navigate to a specific preset, but searching by category helps to speed things up, and the majority of the included patches are varied and well designed, perfectly showing off the unit’s capabilities.

As a nice additional touch, one of the presets is a random generator for those moments when inspiration runs dry. Our only gripe with the arpeggiator is that the internal tempo can – bizarrely – be set only to even BPM numbers. We also had a few issues sync’ing with Logic via USB, but this has been sorted in an OS update.

A look around the back will reveal another hidden gem, as you can actually output CV/Gate messages (in both V/octave and Hz/V), meaning you could use the Pulse as a MIDI hub to control older analogue kit. You can also adjust various parameters such as CV tune to take into account tuning differences between the synths, plus you could also drive your old gear using the arpeggiator, and can even modulate the CV out from the mod matrix. Other nice features include a legacy mode, which switches controller numbers back to their old Pulse 1 assignments so you can transfer old patches across via MIDI dump, as well as a menu item that will re-tune the filter in case it drifts out of line over time.

We were especially excited to find out that there’s space for an effects board to be added at a later date. Exactly what this will be is currently kept firmly under lock and key, but even just a high-quality delay would be a fantastic addition.

Connectivity includes USB, MIDI i/O, external analogue signal input, line out and headphone output alongside CV out (supporting both the V/octave and Hz/V standards) and Gate out.

Alive and Well
The first time we fired up the Pulse 2 we were immediately struck by how bright and lively it sounds. The resonant oscillators give out a far more aggressive and clinical sound than something like a Moog, but that’s not to say it’s a bad thing. It’s still a beautiful and rich analogue sound, just more refined and controlled. It’s particularly good at big, tight bass sounds, and its solid nature means it would arguably sit better in the mix than a softer and warmer synth equivalent.

As mentioned earlier, the smooth stainless-steel dials are good to program with, but there is a sense of disconnection when compared to one-knob-per-function synths. You almost feel like you’re programming a soft-synth, but luckily your ears tell you otherwise. Also, it’s worth mentioning that one of the knobs occasionally stopped working properly, but this seemed to be a very rare occurrence.

Finger on the Pulse
Despite its quirks and the sometimes fiddly editing, the Pulse 2 is really rather special. In a time when we’re seeing an endless stream of warm-sounding and predictable subtractive analogue synths, the Pulse’s flexible oscillators offer something a little different. Rather than seeing it as an alternative, it sits nicely alongside the warmer synths, adding additional colour to your palette. Whether you’re looking to buy your first hardware synth and are after something versatile but affordable, or plan on adding to your collection, we highly recommend going to your local dealer and giving the Pulse 2 a go – the sound might just take you by surprise. 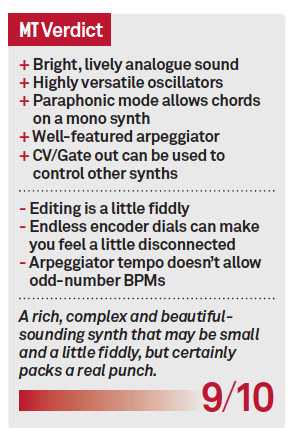