Can you believe 512Kb was once enough memory? And that a UK company made a hardware sampler? Welcome to the world of the Cheetah SX16 I was young and I needed the digital audio – everyone did back in the early 90s. But the only way to get those sampling bits and bytes back then […]

Can you believe 512Kb was once enough memory? And that a UK company made a hardware sampler? Welcome to the world of the Cheetah SX16

I was young and I needed the digital audio – everyone did back in the early 90s. But the only way to get those sampling bits and bytes back then was an expensive one – or at least it was until a big cat came running over the Severn Bridge…

I’d just got my first job as a journalist and I needed a recording set-up because… well, I just did, OK? After starting my job I’d already chosen a mixer and I’d picked out a synth, but everyone was talking about samplers, so I needed one of those too.

We were on the cusp of the sampling revolution when people were starting to lift breaks from vinyl and it was just about the coolest thing a young person could do. Sampling opened up a whole world of audio capture and manipulation, but I just used it to steal bits of dialogue from old episodes of Star Trek and bleeps and blips from Kraftwerk albums.

Either I knew I was never going to be successful enough to release the resulting songs or I just didn’t know anything about sampling copyright. Probably both…

Either way I knew I needed a sampler. It was everywhere as dance music was morphing into trip-hop and jungle. The only problem was, after the mixer and the synth my funds wouldn’t stretch to the four figures that an Akai sampler cost. But then something remarkable happened. And it happened not once, but three times…

Have you seen a cheetah run?

Cheetah Marketing (as it was called) made video game add-ons and a few bits for the ZX Spectrum and other popular 80s computers. I had also made a Spectrum ‘peripheral’ at college for my electronics HND so, as far as I was concerned, we were essentially electronics brothers. 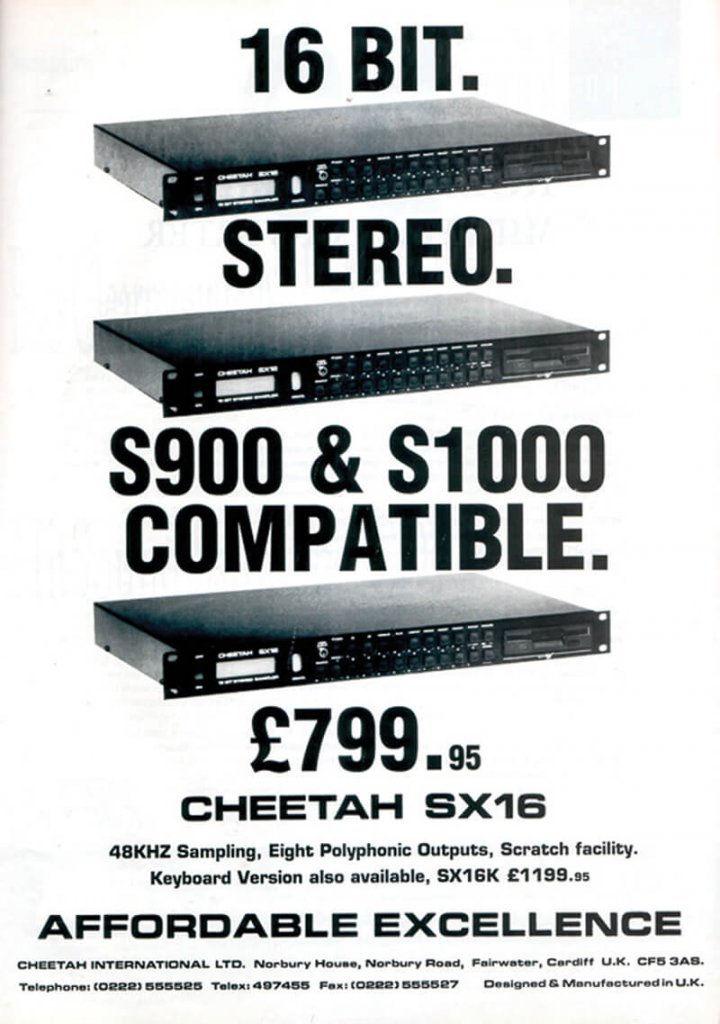 While my peripheral blew up the Spectrum it was connected to, their gear eventually morphed into music production equipment including a Cheetah MS-6 synth and an SX16 sampler. As the sampler was a mere £799 and the company behind it was essentially related to me, I was sold.

You with your 32GB RAM computers. Get you, eh? Well you will certainly not ‘get’ this: the SX16 had 512k of memory, expandable to 2Mb. In 1990 this was incredible news. Not only that, but this sampler was polyphonic, which was music to my ears, although not much music. 512k was hardly going to buy you many seconds of audio to be polyphonic with – at the maximum 48kHz sampling rate, it was just 2.7 seconds of stereo recording. No matter, though.

The biggest draw of the whole shebang was that it had multiple outputs and you could whack the sample rate down to 6kHz, which bumped the available sample time up to a giddy 20+ seconds! Obviously the resulting samples sounded shit – I mean, really shit – but I’ve always been a quantity over quality kind of guy, so that was the sample rate I stuck to.

They say that ‘necessity is the mother of invention’ and whoever ‘they’ are would have been impressed with my 1990 self. Me and my 6-pack of kilohertz pretty much invented some kind of glitch-beat genre (complete with Kraftwerk and Star Trek samples) with loops as crusty as hell and beats and vocals that would take your head off with their crunchiness. Sadly, my incredible new genre never really took off beyond my house, but I did get to know that sampler well. So well that I discovered other tricks to get more efficient.

In my next life as a tester of much better gear I would go on to meet Ian Jannaway, one of the early Cheetah designers and Novation founders. I remember mentioning to him that I’d had an SX16 for years, thinking he’d be impressed with my UK investment. I think that even he thought I’d been an idiot for using it for so long.

Now we’ve got a thriving scene of UK gear producers, but to think that this Welsh tabby stood up against the big cats back then is incredible. ‘Anhygoel’ even…