Harking back to the sounds of the 70s and 80s, UVI’s String Machines2 takes things to the next level. Dave Gale gets all nostalgic for the ensembles of yesteryear… Price €99 Contact UVI | www.uvi.net String Machines 2 key features: Very comprehensive package, with plenty of sound creation possibilities 62 string machines/synths are represented Lovely […]

Harking back to the sounds of the 70s and 80s, UVI’s String Machines2 takes things to the next level. Dave Gale gets all nostalgic for the ensembles of yesteryear… 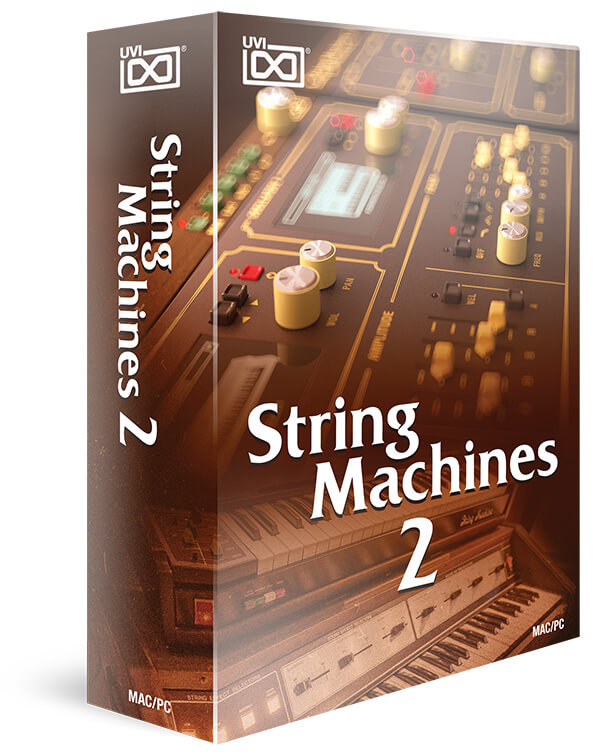 So what’s your sound? No, not ‘your’ sound, but that sound that you remember from when you were a nipper? You know, that sound that you thought, ‘one day, I must own that.’ It might be the sound of a MiniMoog, or even a Supersaw monster soft synth, but anyone who grew up in the late 1970s or 80s will immediately identify with the generic sound of the string synthesiser, or string machine as they came to be known. Where string machines scored high was in their ability to play polyphonically, where mono synths could not, hence fans of the technology came from all corners of music.

Joy Division, Jean-Michel Jarre and even Steely Dan employed the string synth to emulate the sound of a string section, and thanks to Scando hipsters such as Royksopp and Lindstrøm, they’re firmly back in fashion and a weapon of choice for contemporary production.

UVI brought us its first String Machine package back in 2012, so the update is welcome, as is the sheer breadth of machines which are now included, taking the machine count from 11 up to a bewildering 62. My first thought was that I didn’t even know that there were 62 string synths to sample but, once downloaded, the proof becomes clear as the library takes up a fairly considerable 17GB of disk space.

This library fits into the UVI eco-structure, and effectively ships/downloads with the UVI Workstation app/plug-in which, for my money, offers a nice and easy way to get at the sounds, with a minimum of fuss. 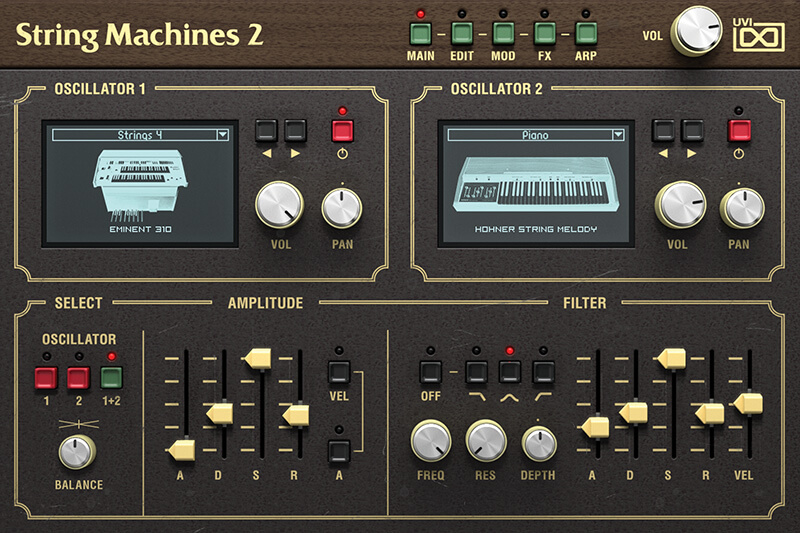 Getting the library into the plug-in requires a modicum of thought, and a little read of the manual, but once in and authorised, my opening salvo of String Machines tryout was lush, beautifully rich and probably about the best I have heard anywhere.

There’s an assurance of clarity in the top end, which I later discovered was often down to a little clever use of filter resonance, but who cares, as it sounds amazing! The sign of a great synth is when you get yourself lost in music and, sure enough, I found myself playing all the tunes I remember so well, and tinkering with phaser FX, to get it to sound even more like the real McCoy.

The other playback option is to place the library into the UVI Falcon plug-in, should you have it. Falcon is a very powerful synthesiser and one that delivers the goods, particularly on the editing front, where more options become available. But I have to say that the String Machine interface is far from lacking, and I found myself immediately drawn to the more simplistic workstation representation.

62 String Machines, standing on a wall

Turning my attention to the sounds themselves, it was time to delve into the presets and the raw samples. It quickly became apparent that the name adoring the front of the package doesn’t tell the entire truth. There’s quite a bit more available here than strings, which has much to do with the sampled machines.

Apart from all the usual suspects, such as the Solina, Freeman and Eminent, you’ll also find voice timbres from the Roland VP-330 Mk1 & 2, and the occasional trumpet, but it’s important not to get too hung up on this, as the preset list quickly offers a very fine collection of interesting patches that go way beyond the original remit. Bells, brass, leads and organs are all on offer, and some of the timbres are so unexpected, you’d be forgiven for thinking that you were using the wrong plug-in.

The main structure of each patch is familiar and simple: two oscillators allow for a choice of timbre from the raw sample list, which are then filtered via the VCF section, offering low, band and high pass options, as well as a Defeat mode. There’s a dedicated envelope for the filter, along with depth control, while filter cut-off can also be employed via keyboard velocity, with a fader to dictate the degree. The oscillators are easily balanced and panned, while the choice of raw sample is bewilderingly extensive and by far the most comprehensive I have seen in a plug-in of this kind.

With the String Machine moniker attached, any prospective purchaser would be forgiven for thinking that this is a bit of a one trick pony, and certainly, if your main interest is as a library of string machines, you are certainly not going to feel short-changed. 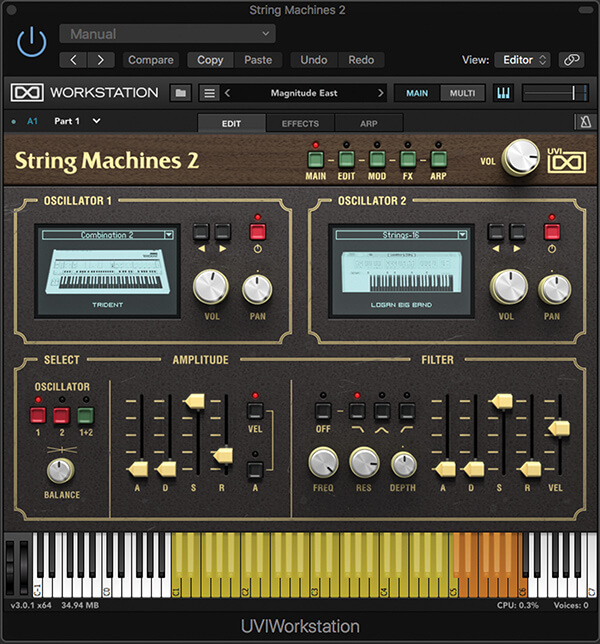 It is stunning in this arena, and is unbelievably cost-effective with it. However, it is also a very powerful and inspiring plug-in, thanks to modulation, FX and arpeggiation contraptions, all of which can easily take the package completely away from its published manifesto, and into a beautiful world of sound deign and ethereality. Consider it two packages for the price of one, if you like, and then neither will short-change you!

The styling of the plug-in is really lovely to use; its faux-wooden and retro feel just draws you in, and the pots and faders are all sensibly sized, to entice the user to have a noodle. Moving away from the main page, there are another four pages which are clearly labelled via buttons at the top of the interface. The Edit page offers a basic set of parameters to allow for changes in performance, such as choice of octave, mono or poly operation, and portamento.

The modulation page is where it starts to get a tad more interesting, thanks to the presence of the step modulator. It’s possible to assign a number of steps, while drawing in amounts on a bar graph, and send these values in the direction of the volume or filter, which is all nicely clocked to the DAW’s tempo. The LFO offers similar routing options, with the additional deployment to pitch, as you would expect.

You can’t have a string machine without effects and the included FX section offers us plenty of choice and control. Phasers, ensembles, chorus, delay and reverb are all available, along with a handy EQ for taming any of those high frequencies that might become a shade overbearing. The phaser, in particular, feeds back nicely to give you that nod to the past masters, but can be backed off to give us a more contemporary Scando-styled effect.

Finally, we have to mention the arpeggiator, which is similar in construct and design to the step modulator, but with twin styled operation, offering one for each oscillator, which can also be linked. This tiny little detail opens up some stunning possibilities, as each sound can look after its own detailed elements, having the same chord arpeggiating in all directions, with absolutely ease.

So what’s the overall impression? Sonically, this is a stunning collection of vintage sounds, which are only really vintage if you want them to be. If you’re after that old strings machine sound, you’ll find the options for both choice and edit-ability completely bewildering.

It is a stunning collection of samples which, at the most basic level, sounds amazing. The clarity speaks for itself, but it undersells what Strings Machines 2 can do as a package, because there are plenty of places to get busy, and you’ll find that in many instances this sounds nothing like a String Machine at all.

Our review version was a little bit hungry on CPU power, however, though UVI is working to soften this with updates expected imminently. Also, it would have been nice to see some different options for filtering, but then with 62 machines at your disposal, you can forgive this, especially given the price point. 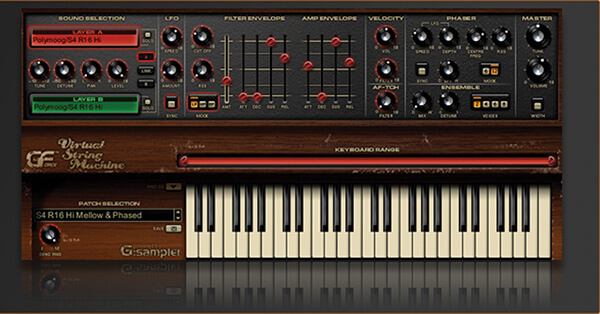 Probably the first package to bring together an extensive collection of machines, VSM remains a favourite including the finest string machines, and oddities can also be added via an expansion pack. 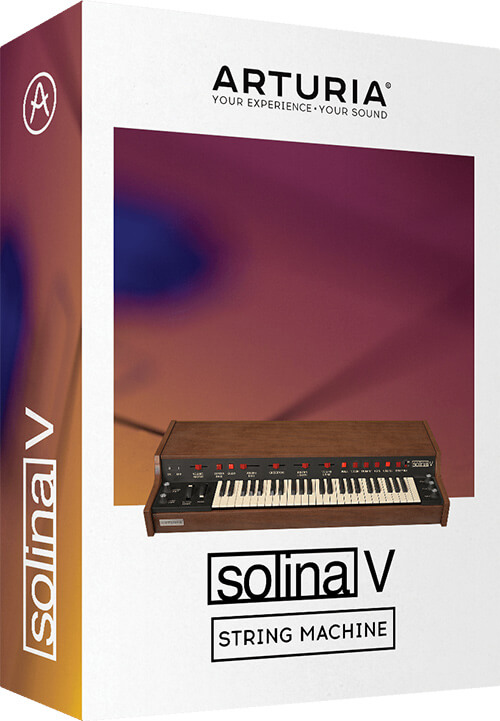 Concentrating on the Solina String Machine, Arturia’s brings us the machine which for many is the most famous of the bunch. Complete with emulations of the Mk1 & 2, Solina V includes all the usual effects within a reverential plug-in.