The latest offering from UVI offers a wealth of synthesis opportunities, but will it fly? Dave Gale eyes up his new prey in its newly released v1.2 form… Details Manufacturer UVI Price €349 (£268 based on current exchange rate) Contact via website web www.uvi.net In my experience, virtual or soft synths (call them what you […] 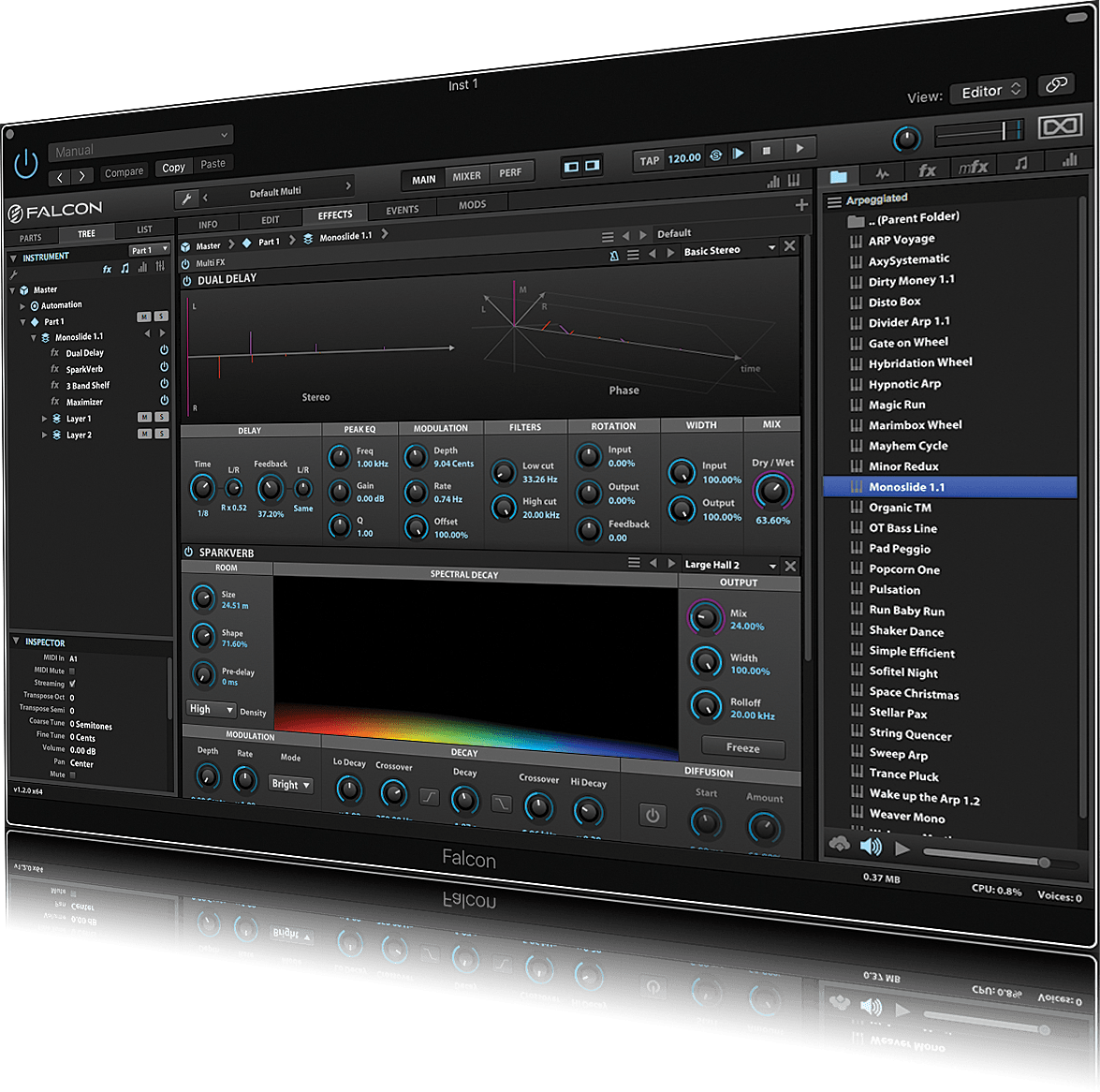 The latest offering from UVI offers a wealth of synthesis opportunities, but will it fly? Dave Gale eyes up his new prey in its newly released v1.2 form… 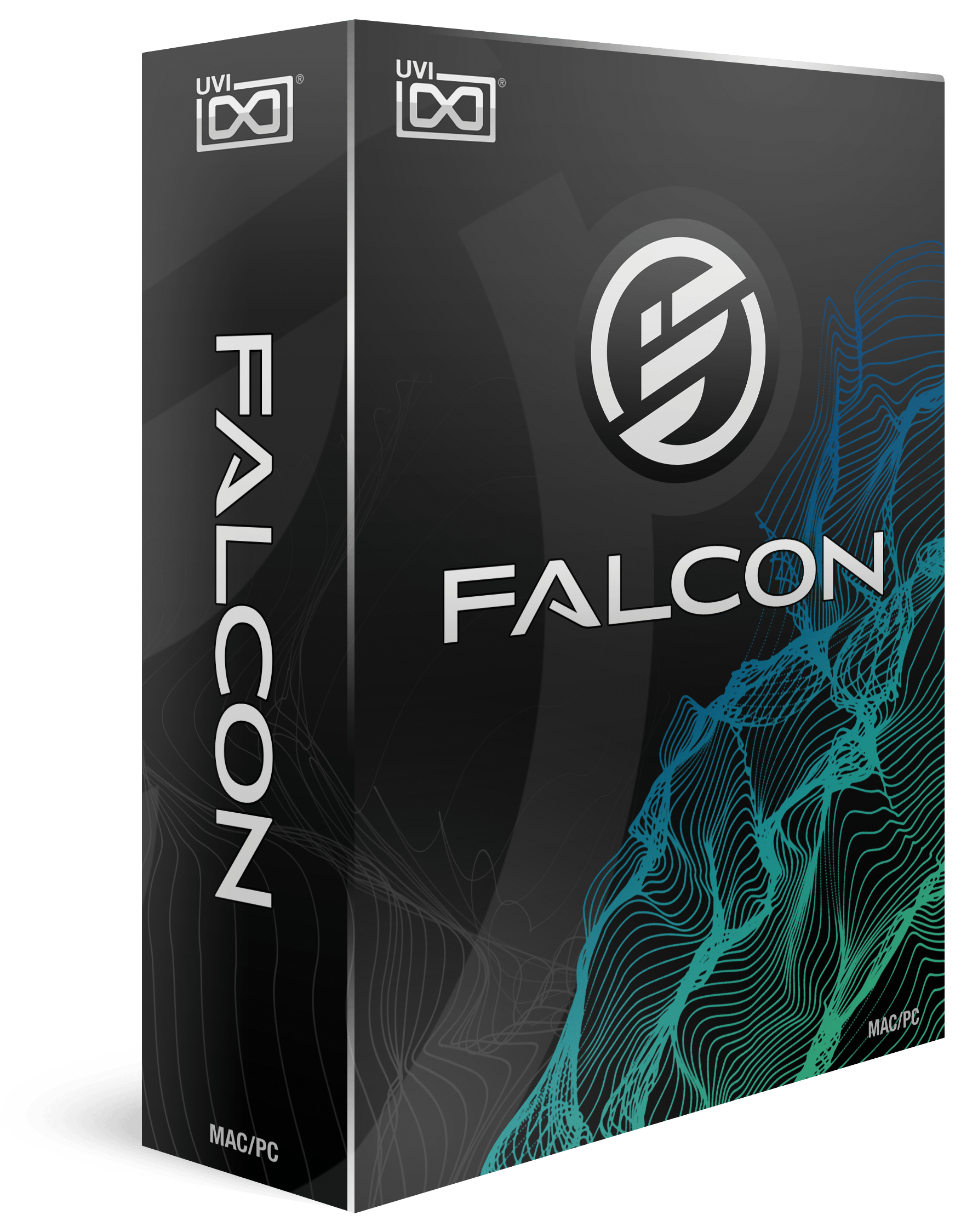 In my experience, virtual or soft synths (call them what you will) tend to fall into two camps. There are those that set out to be virtual soundalikes of classics; then you have synths which are cutting edge and attempt to offer new and enticing ways of creating interesting sounds. The Falcon most definitely falls into the latter camp.

My review copy arrived as a download which, in line with many synths of this kind, is a two-part affair consisting of the application and the much larger factory bank of sounds. Thanks to the file hierarchy, it’s easy enough to park the sound bank in any drive-based location, but you’ll need to tell Falcon where it resides.

It’s important to note here that you’ll need to select the folder ‘above’ the singular downloaded soundbank file, rather than the file itself, but it does also mean expansion soundbanks
can be added at any point and more importantly, be located anywhere on a system (although I’d always try and opt to keep things together, for simplicity).

If only the relationship between all soft synths and their associated files were this easy and flexible… The included factory soundbank is 637.5MB in size – so not overly huge, by modern standards – but as I was to discover, there’s plenty to get your teeth into, straight out of the box.

Upon opening the Falcon plug-in for the first time, it immediately struck me that the interface was a little dark and bland. Clearly, the idea here is more about function than eye candy, which is always the right way around; but it’s better to have something which is a little more forgiving on the eye, especially if you’re going to get into some serious programming. So, my first port of call was to have a listen to some of the factory patches – and it’s at this point that the power of Falcon hits you squarely between the eyes.

It sounds huge and very powerful; in fact, the Falcon sounds so huge, I found that it almost permanently ran with a very hot signal, which required me to turn down the soft-synth channel in my DAW, which was pretty permanently overloaded.

What was very clear from the patch surfing I undertook was that there was a great deal of complexity available in the sonic architecture: not just at the source roots of the timbre, but with the modulation (the evidence of which you can see dancing around on the screen, as the pots move in all manner of directions, dependent on routings).

So, starting with the basic premise, let’s think about what’s on offer. Falcon is multi-timbral, within a single instrument, with the multi elements being described as Parts. Each one
of these parts comprises sets of Programs, Layers and Keygroups, the latter being what you might consider the smallest component, since they’re made up of the more traditional elements such as oscillators. 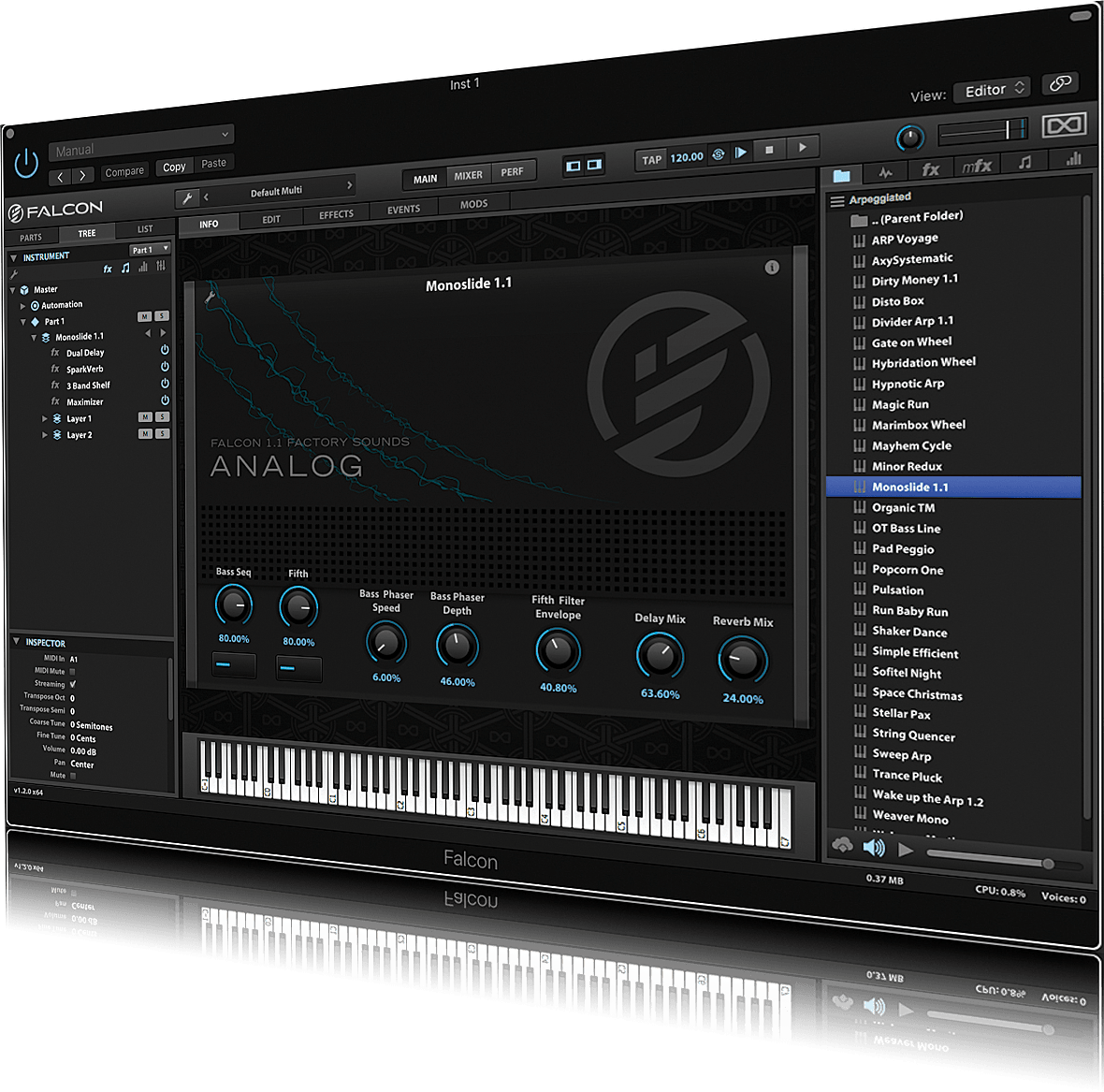 “The Multi Granular algorithm is great, resulting in a thick texture of jittering sonic joy”

Starting with our most basic building block, I dived in to see what the oscillator could offer. It’s fair to say that there’s plenty of scope here, as the oscillator section offers traditional and more avant-garde options. The basic oscillator Analog option offers the usual mix of waveforms, with Analog Stack offering pretty much the same thing just with a stack of eight oscillators, each having their own settings in all areas from waveform to pitch. The wavetable selection within the oscillator offers some excellent tonal capabilities, with the ability to swan through the wavetable manually or directed via modulation.

All sounds wonderful, but leaving the more traditional synthesis concepts to one side for a moment, where the power really comes into play is with the sampling section, where audio files can be dropped in and operated on. Here, there are a number of options with the IRCAM moniker. For those unfamiliar with IRCAM, this is one of the absolute hubs of international research into both sonic creation and music, which has played a significant role in the development of contemporary music, particularly electro-acoustic, and associated technologies. Thanks to this, the four algorithms associated with IRCAM are immediately enticing. The Multi Granular algorithm comes in for particular praise, resulting in a thick texture of jittering sonic joy. 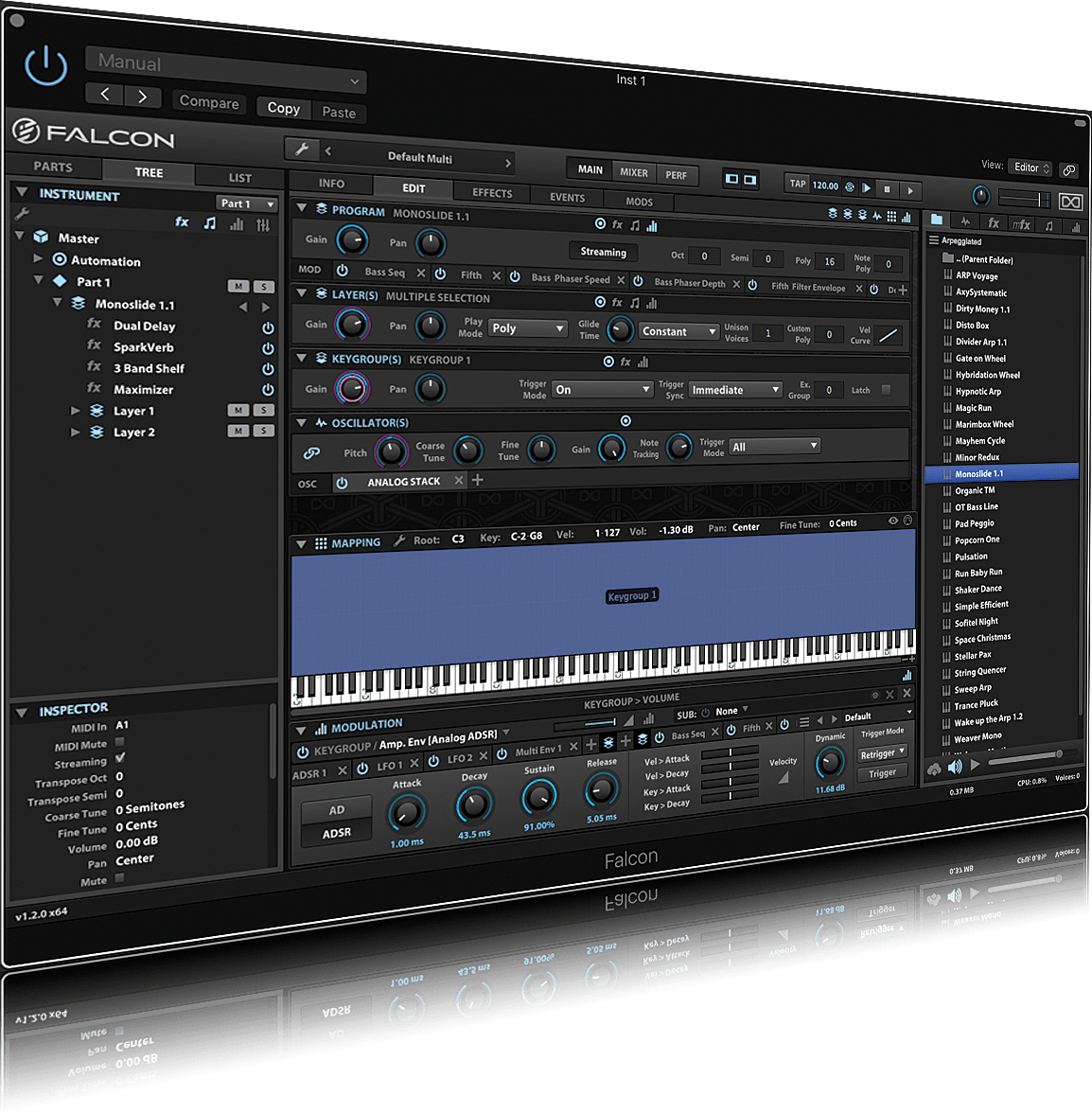 There’s no doubt in my mind that it’s the sample import and resynthesis/processing area of Falcon that will excite users the most, as the possibilities are pretty boundless. In total, there are 15 oscillator options available, which then nestle alongside other traditional elements such as envelopes and LFOs, which can be found in the Modulation section. What’s very obvious here is how vast the routing capabilities are in the Mod section, offering all manner of control over parameters.

It’s at this point I have to say that the complexity of the interface will require quite a degree of work. After a little bit of head scratching, I was able to make some competent and basic patches without referring to the manual, but once beyond this, things inevitably get a shade more complicated. Most users will have to sit down for an hour or so in order to really get to grips with how it all fits together.

With this in mind, there is a very helpful Structure Tree to the left of the panel interface which will help you decipher the building blocks that are in use. This becomes invaluable if you also partake in one of my favourite pastimes, which is reverse-engineering patches to see how sonic elements are created. When multi-numbered elements are thrown into the equation, along with a healthy dose of modulation and FX processing, the Tree will really help you shake it all down.

“If sound design or creating unique timbres appeals to you, this should be high on your list”

There are also some useful performance-based elements, too, which reside in the Event Processing section. Basic arpeggiation duties are on offer here, with control of velocity triggering, which makes for some very dynamic operation overall.

So, once you take all of these elements into account and consider that all of this can be stacked up, you have a pretty good picture of how vast Falcon sounds, but I do have to admit that I found the interface rather functional in use. It certainly does what it sets out to do, but the lack of any hugely discernible graphically enticing interface might switch some users off.

The vastness of the functionality that’s on offer here should by no means be underplayed, though. It’s an exceptionally powerful instrument and while it has much to offer in terms of traditional synthesis, it’s the sample-based resynthesis which I found the most interesting and exciting area to explore. So, if sound design or creating unique timbres appeals to you, this is a package that should be high on your list to test-drive.

At the point of review, I was just working with my own samples and the Falcon factory set, which is definitely impressive and highly usable in a number of musical contexts. It will endear itself to any contemporary musician working in electronic idioms and will really appeal to soundtrack composers. You’ll need to put in some time and do some legwork to really get this to work for you if you want to take it further, but straight out of the box it will also sound great – and if the expansion packs are anything like as good as the factory set you could have a useful arsenal of sonics at your fingertips. You might find that, like some other Rompler-style products, building up a large library with expansion packs could become costly over time. but with just two packs currently available at only €39 each, that’s not going to break the bank. 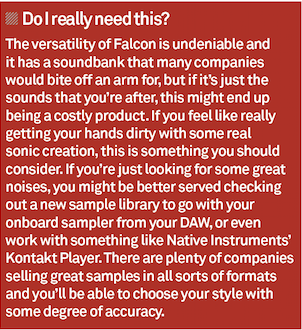 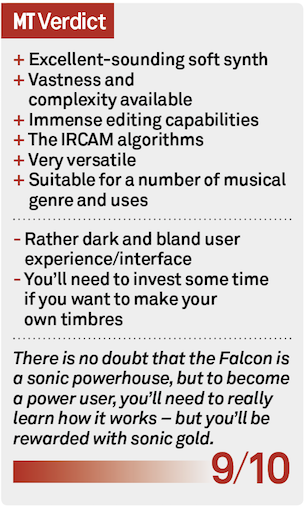