As one of the most well-respected bus compressors, it was only a matter of time before the API 2500 made its way onto the UAD platform. Mark Cousins takes a closer look… Details Manufacturer Universal Audio Price £229 Web www.uaudio.com Universal Audio’s growing range of plug-ins for its UAD powered plug-ins platform offers an Aladdin’s Cave […] 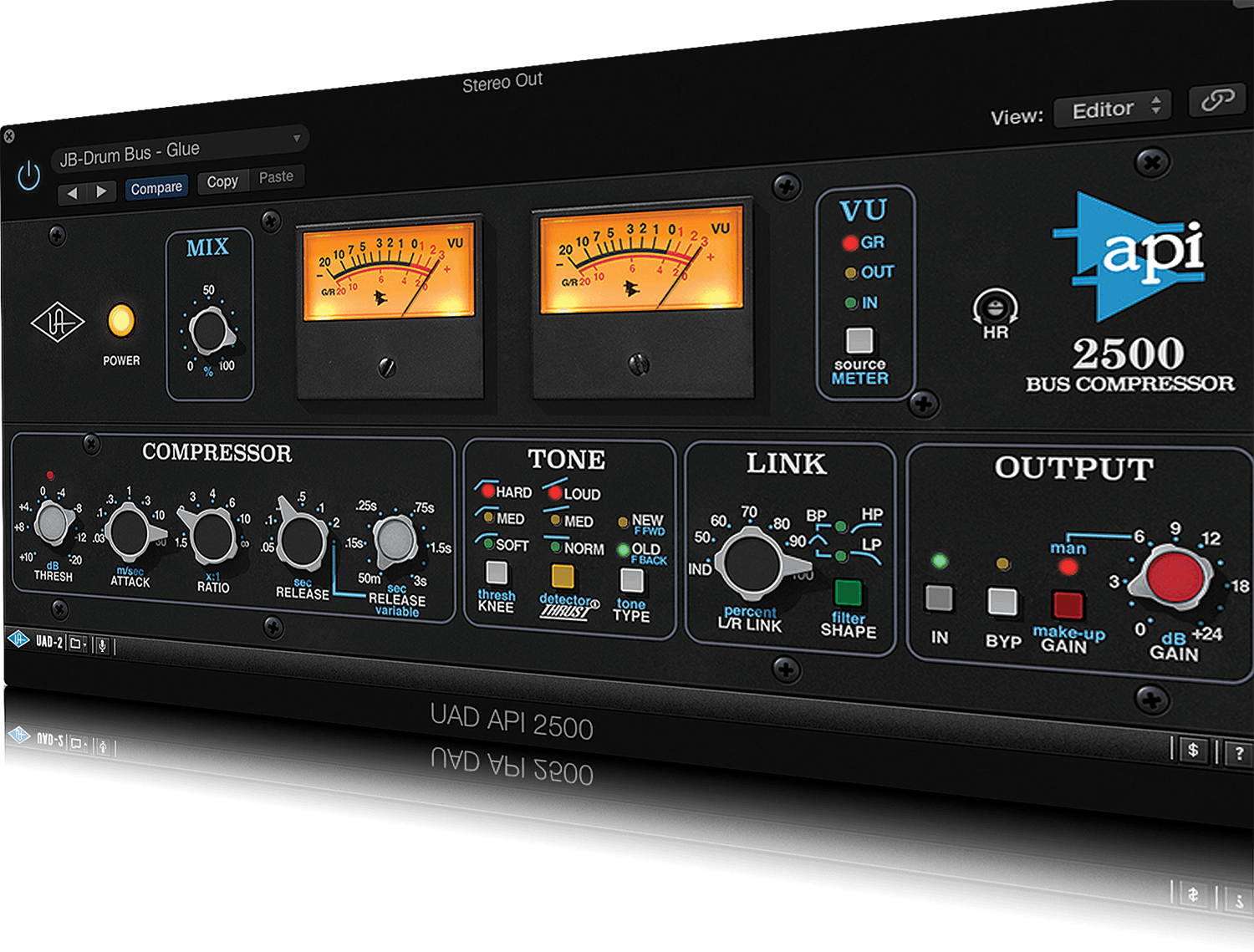 As one of the most well-respected bus compressors, it was only a matter of time before the API 2500 made its way onto the UAD platform. Mark Cousins takes a closer look…

Universal Audio’s growing range of plug-ins for its UAD powered plug-ins platform offers an Aladdin’s Cave of audio hardware in software form. From classic vintage compressors to equalisers and reverb units, there’s little, it seems, that isn’t covered by the range. The API 2500 Bus Compressor is the company’s latest offering, painstakingly modelled from the original hardware version and partnering well with its existing API 500-series equalisers and API Vision Channel Strip.

However, with plenty of excellent bus compressors already on the UAD platform, does the API 2500 really add anything new or interesting to what can already be achieved?
Rather than being a jack-of-all-trades compressor, the original API 2500 is firmly planted in the role of bus compression, thanks to both its relative audio transparency, but also a number of additional features – including a Thrust control and some intriguing link functionality – which work to set it apart from other existing hardware bus compressors. It’s also worth noting that Universal Audio has thoughtfully included a Mix control that’s not found on the original unit, and this adds to both the flexibility and transparency
of the API 2500 in plug-in form.

On first use, the API 2500 works in much the same way as any other VCA bus compressor: like SSL’s G Series Bus Compressor or Vertigo Sound’s VSC-2. Dial in a soft knee and a 2:1 ratio, for example, and you get an SSL-like mix glue where the compressor gels the track together without any noticeable pumping. The programme-dependent release helps the musicality of the compressor, and even at extremes, it delivers an efficient and musically effective gain control that doesn’t dominate the source material.

“Thrust strategically inserts a high-pass filter in the sidechain path, changing the response”

The API 2500’s operation gets much more interesting when you start to explore the Tone section, particularly with respect to the Thrust and Type controls. With Type, the API 2500 can move between a Feed-forward or Feed-back compressor topology (labelled New and Old respectively) that contrasts the performance of a typical VCA compressor with the less forgiving sound of something like a UREI 1176. As you’d expect, the Feed-forward routing tends to result in a touch more gain reduction, but with an added transparency; while the Feed-back routing loses some gain reduction but adds a touch more character.

Like the UAD version, Waves’ API 2500 faithfully captures the charms of the original analogue hardware – although, of course, it will take a hit on your computer’s CPU rather than the UAD DSP expansion. The UAD version also adds a Mix control and an adjustable Headroom, which may give it the edge.

Next up is Thrust, which strategically inserts a high-pass filter into the sidechain path, changing the compressor’s response and, more importantly, how the low end carries. The control has three settings – Normal, Medium and Loud – with Loud delivering a noticeable difference in the low-end punch. Given that the wrong dose of bus compression can often compromise low-end performance, you can see why the Thrust circuitry is a real asset. Another good addition is the Link section, which took us by surprise as we noticed the gain-reduction meters were moving somewhat independently of one another. Link, therefore, lets you dial-in the level of interdependency between the two channels, so that the two channels are 100-per-cent linked – or alternatively, they gain an increasingly level of autonomy. From a musical perspective, it means that a loud crash cymbal in the right-hand channel needn’t attenuate the left-hand side of the kit, giving you more control over where and how the compression is applied.

Having been initially unexcited by the prospect of another bus compressor, we have to admit to being won over by the versatility of the API 2500. Naturally, it shines across a drum bus, but across a stereo bus or in mastering, the 2 or 3dB delivered from a ‘fine-tuned’ API 2500 can make all the difference. While other bus compressors can deliver good results, the API 2500’s Thrust, Type and Link controls really set it apart and can certainly give it the edge over more limted compressors. Of course, if you’re a ‘colourful compression’ junkie you might want to look elsewhere, but if you want precision and control, the API 2500 delivers in spades. 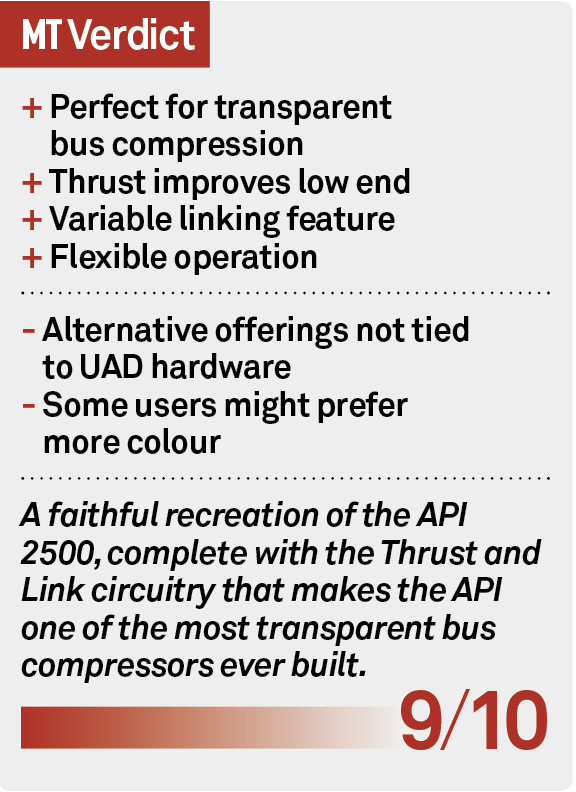