Getting the most out of your tracks doesn’t have to mean spending the earth. Hollin Jones gets loud with Tracktion’s Master Mix… Details Price  $59 Contact Via website Web www.tracktion.com System Requirements Mac OS X 10.7.5 or higher Windows XP or higher 2GB RAM VST or AU host Tracktion is one of the more affordable DAWs […] 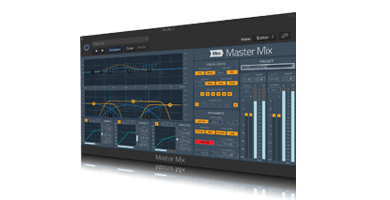 Getting the most out of your tracks doesn’t have to mean spending the earth. Hollin Jones gets loud with Tracktion’s Master Mix… 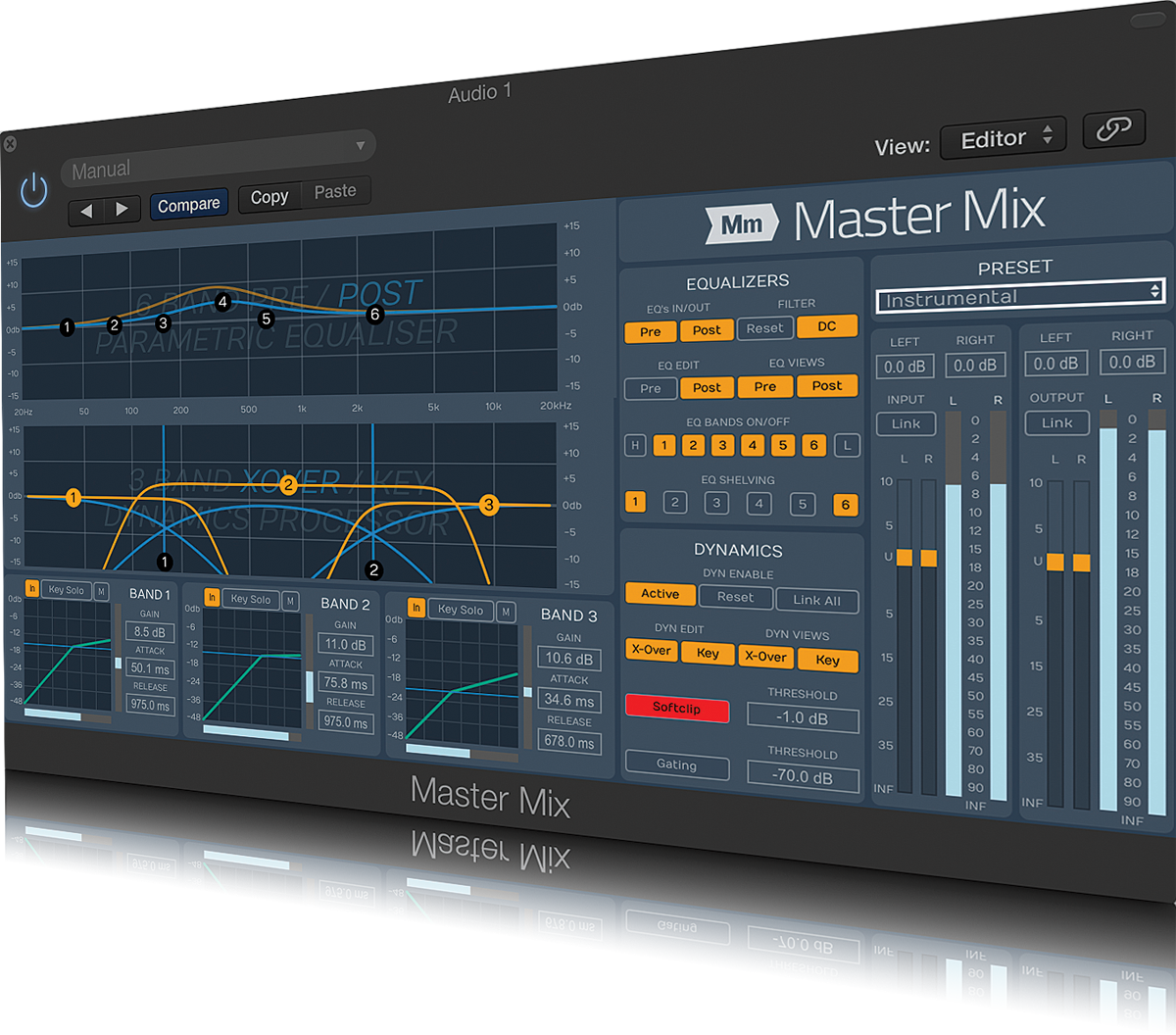 Tracktion is one of the more affordable DAWs on the market but still offers a great feature set for those that want to record and edit audio and MIDI. The developer has launched the Marketplace, an online store through which you can buy plug-ins and other content and it also sells some of its own add-ons in this way.

Master Mix is a mastering plug-in that comes in standard 32 and 64-bit VST and AU formats for Mac and PC as applicable. As you might hope, the plug-in approach means that it will work not just in Tracktion but in any DAW that supports those formats. There’s no requirement to have Tracktion already: you can use it in Logic, Live, Cubase or whatever you like.

Master It
Oddly, even the more expensive DAWs on the market often do not come with a dedicated mastering plug-in. They will certainly have the components required to build a mastering chain and this is always possible, but dedicated mastering in a single plug-in seems to almost always be left to third party developers.

Of course a plug-in chain with limiter, compressor and EQ isn’t a massive amount of work to set up, but having everything in one place means things like working with presets and visual feedback are generally easier. Having a dedicated mastering plug-in, then, makes for a smoother process.

In case anyone isn’t yet convinced of the absolute necessity of mastering their tracks, mastering is the reason your mixdowns sound a bit weedy or unbalanced next to commercial tracks. After mixing is done, mastering adds weight, sweetening and power to a mix and is the last step of the production process. As such it’s well worth getting a good tool to do it with.

Once you have downloaded the plug-in you will need to copy the components to the relevant folders on your computer and then on first loading, register online.

You will most probably want to strap the plug-in across the master outputs of your DAW or wave editor – anything that can play the signal through Master Mix in real time. Graphically it’s quite straightforward, in contrast to something like Izotope’s Ozone 6 which is costlier and more advanced but also a little more daunting for the uninitiated. 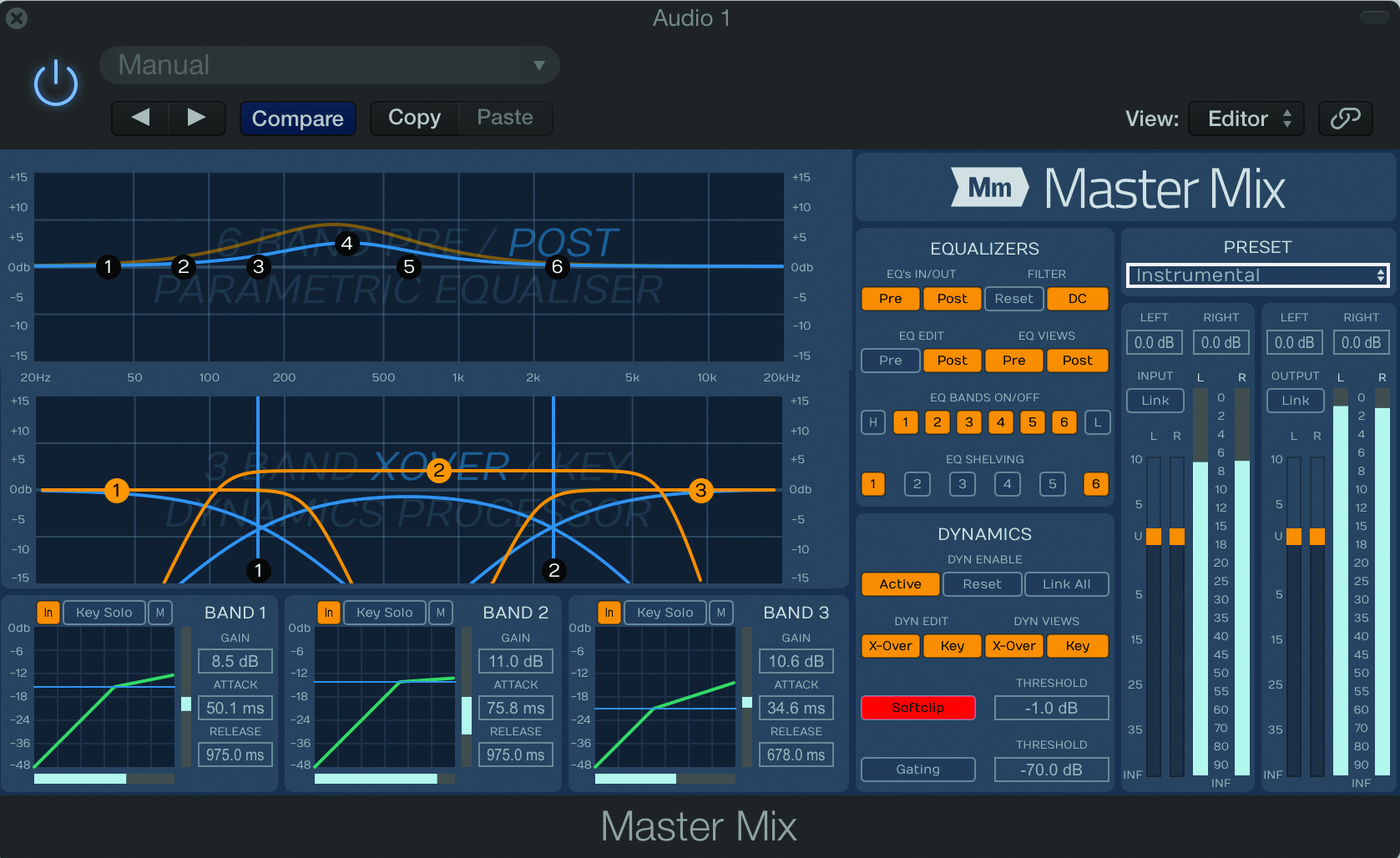 Simple Approach
Here, everything you need is in a single window. There are three dynamics processors, forming a multi-band compressor/expander. Each has its own set of controls and user-configurable crossover points that can be dragged with the mouse.

If this gets a little crowded you can turn various elements on and off to make it clearer what’s going on. The three bands have editable controls along the base of the window as well, making it easy to see the knee settings of each one and to solo or mute it for more precise control. A soft clip limiter and gate are also provided, with simple controls.

At the top are two six-band parametric EQs, one located before the dynamics stage and one after it. Again these can be shown and hidden and any of the six bands manually set or switched on and off for each EQ processor.

Low and high pass bands are also available as is EQ shelving, though it’s not possible to set Q values for the EQ points. Tweaking the EQ curve of a master is crucial and helps you to bring out nuances or rein in any errant frequencies and here it’s friendly to use, though variable Q would be nice.

Loud and Proud
There are of course some presets to get you up and running and these cover everything from jazz through rock, dance and other stylistic descriptions. As ever with mastering presets the one whose name matches your track might not actually sound all that great, but a couple of others are sure to.

So just loading up a couple of mixes and applying a preset then making the many tweaks invariably necessary to suit a particular track, it was easy to add plenty of weight and sweetening while preventing clipping. Having everything on one screen is refreshingly useful, especially if you’re used to the multi-section seriousness of some other mastering suites. Granted, it means less functionality overall, but much of that may be stuff that intermediate producers won’t miss.

Master Mix is a very affordable way to master your tracks in any VST or AU-capable software. Though lacking the bells and whistles of costlier alternatives it has virtually all the core stuff you need and won’t blind you with science. There are a couple of things it would be nice to see – Q points, maybe a stereo widener – but you can achieve some great results nonetheless. 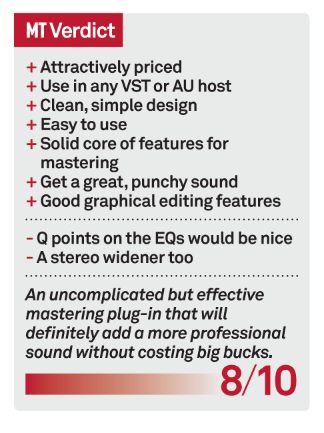