Toontrack makes big claims for Superior Drummer 3. Is it a plug-in? Is it a virtual drum machine? Martin Delaney says no, it’s a drum DAW… 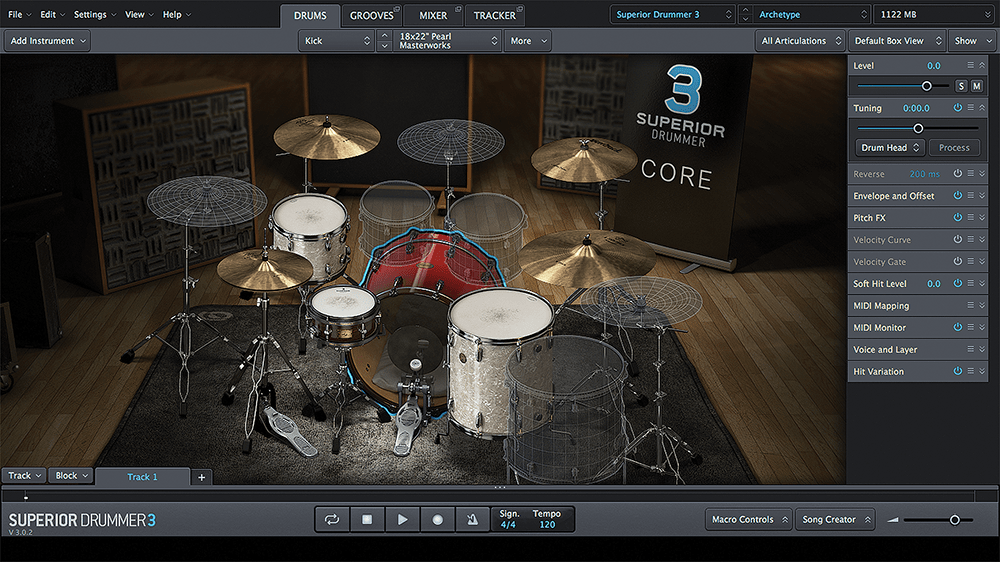 Toontrack has updated its flagship product, Superior Drummer, and while I admit it’s not something that’s been on my radar – in fact, I’ve never heard of it before – I’ve discovered that many of my fellow producers are fans, especially those involved in soundtrack composition, needing fast access to a large library of high-quality sounds, detailed programming, and possibly a bit of Surround, too.

SD3 runs standalone, or as an AU/VST/AAX plug-in. It’s built around recordings of seven acoustic kits recorded at Galaxy Studios in Belgium (“the most quiet recording space of this size in the world”), by renowned engineer George Massenburg.

The kits are from Gretsch, Ayotte, Pearl, Yamaha, and Premier, and the core library includes 230GB of 44.1kHz/24-bit samples, with an additional 350 or so drum-machine sounds. Beyond the kits themselves, SD3 features a built-in MIDI editor, MIDI beats ready to use in the form of ‘grooves’, a full-featured mixer with effects, macro controls, and audio-to-MIDI conversion.

SD3 is available as a download, but if the download size scares you, for an additional €189, Toontrack ships an SSD with the library pre-installed, which is how it arrived here for review. There’s no need to drag the library over to clog up your computer, it runs fine off the SSD – this convenience meant I could do much of the review on a humble MacBook Air.

SD3’s interface is logically laid out, the centre occupied by a graphic of the kit, where each instrument animates when triggered via MIDI or mouse click. At the right are controls to edit the currently selected instrument, and at the bottom are macro controls, the MIDI editor, and the Song Creator.

A series of tabs access views for Grooves, Mixer, and Tracker – all will be explained shortly. Even on the 11-inch MacBook Air, the SD3 layout worked beautifully. Individual elements from the main display can move into separate windows, and the entire thing scales between 70-250%.

You can start by loading a default ‘clean’ kit from the menu at top right, and although you can trigger it with mouse clicks, you really should use a MIDI device of some kind to fully appreciate the responsiveness.

Following that, browse the preset kits by genre, or by producer, including George Massenburg, Bob Rock, and Richard Devine. If you don’t have a MIDI device handy, load and loop a pattern from the Grooves tab while you swap kits.

The mixer is where you start to experience the overall ‘DAW-ness’ of SD3, with channels for each instrument in the kit (up to 16), with bleed levels, output routing (up to 16 busses), and effects available for each.

There are 35 plug-ins from Overloud, organised by category, including delays, distortions, tape simulation, EQs, transient shaper, limiters, compressors, exciters, reverbs, and modulations. All of these effects sound great and are suitably drum-appropriate – each includes a selection of presets, and can be used on inserts or busses, and applied to the main stereo output. 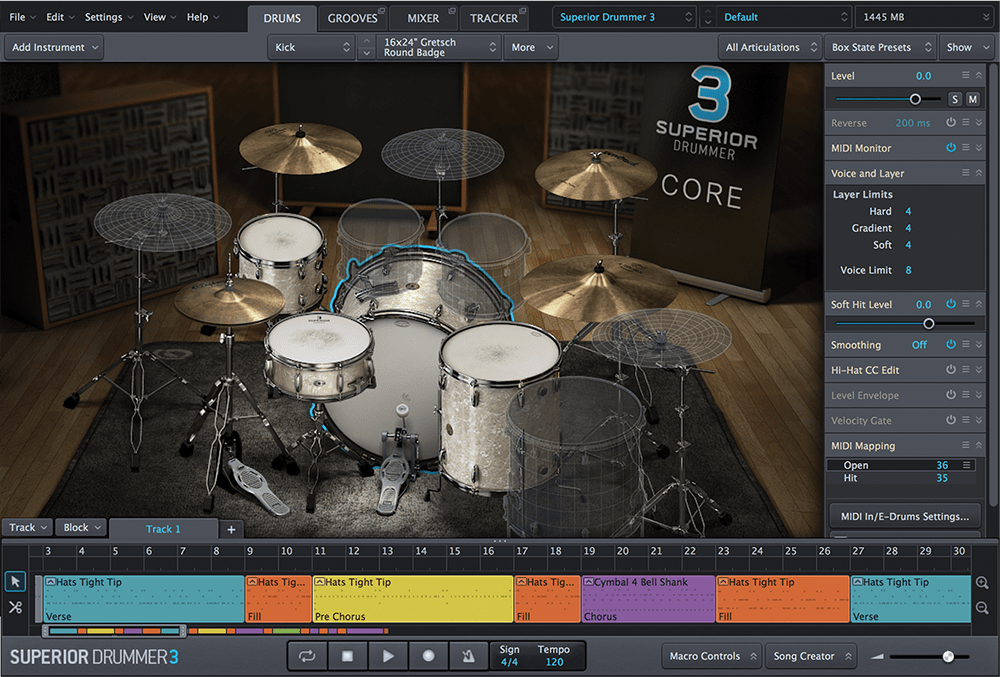 You can probably tell from our Excellence Award that we’re in no doubt as to the quality of SD3 on its own merits. So the answer to our question will really depend on how you work with drums and the needs of your productions – it offers unrivalled creative control, customisation, loads of content with incredible detail, and will take care of drum production from start to finish.

For each instrument, you can take mic bleed from the rest of the kit, or one specific source, even if the track is muted. SD3 supports Surround in either 5.1 or 11.1, but if you’re not planning to use Surround, you can save download time and disk space by not installing the separate Surround content, which comes to around 94GB, and you can employ the Surround channels as extra stereo-ambience channels.

The Grooves tab lets you access SD3’s MIDI drum patterns, filtered by genre (for example, Metal), then playing style (Blastbeat), type (Beat), signature (4/4), and the more mysterious Power Hand (Hi-Hat Open) – which refers to the dominant/leading instrument in the groove.

You’ll see a list of matching song parts, such as four verse parts and a bridge, and you can drag them into the song blocks in the track below. For a more spontaneous method of finding grooves, use Tap 2 Find. Tap out a beat using your mouse or a connected MIDI device (SD3 doesn’t have a virtual MIDI keyboard), and SD3 will analyse your playing and suggest grooves that are close to it. The Tracker tab is where SD3 handles audio-to-MIDI conversion (see boxout).

After preparing a kit and grooves, you can build a structure using the Song Creator. Drag in a MIDI part, and you’re given a set of song structures to choose from, and customise – with different individual elements for each intro, verse, chorus, bridge, or end.

You can continue editing MIDI at this stage, and create multiple tracks to build more complex full arrangements. Song structures are saved for recall and reuse with different grooves and projects. 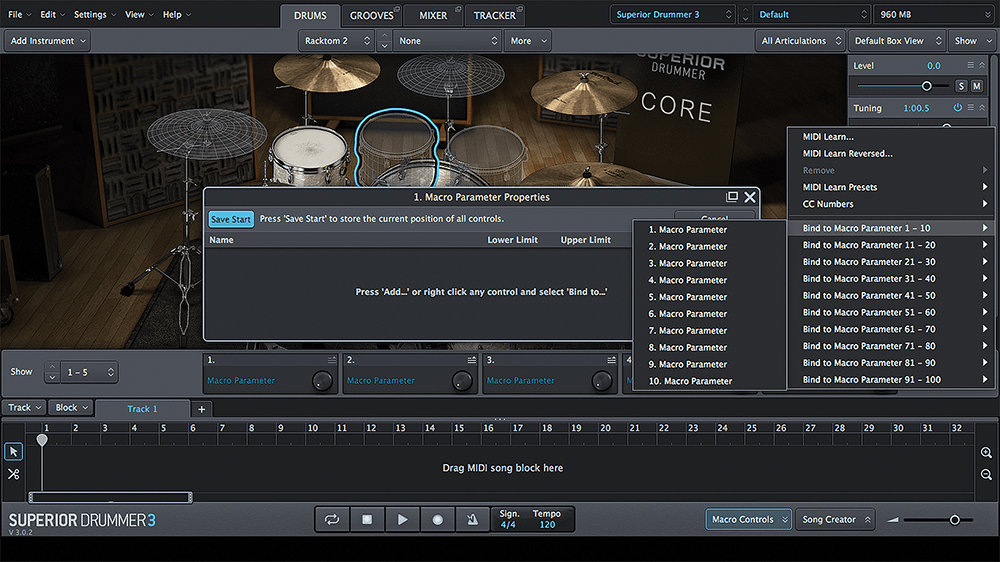 Whether you’re working in the drums, grooves, or mixer tabs, you can bring up the macro controls as well, which can be assigned to pretty much any parameter you want in SD3, then mapped to the MIDI controller of your choice, or automated via a DAW. Only five macros at a time can be seen on screen, but there are up to 100 available!

In standalone mode, these worked fine mapped to a Faderfox controller, and as a plug-in, I used them with Ableton Live, assigning them in Live then controlling from the knobs on Push. 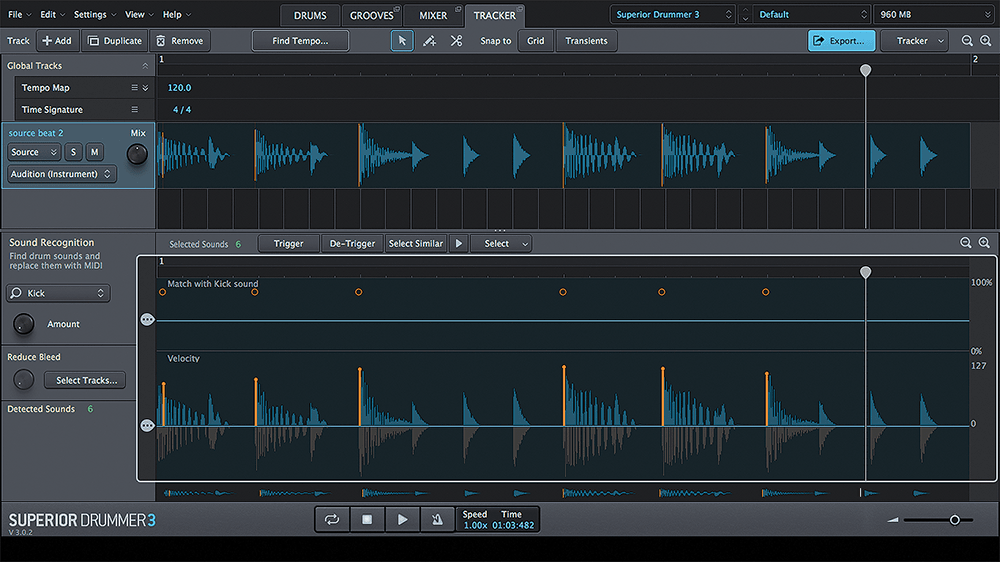 SD3’s Tracker has its own take on audio-to-MIDI conversion. Load a sample of a drumbeat or percussion part, and the software analyses it and gives you the option of using a single MIDI region containing all of the detected kit sounds, or separate MIDI files for each track.

If it doesn’t get it dead right, you can edit the results. The resulting MIDI regions can then be dropped into the song track at the bottom of the screen. These conversion operations work just as well whether Superior Drummer is running standalone or inside a host DAW. 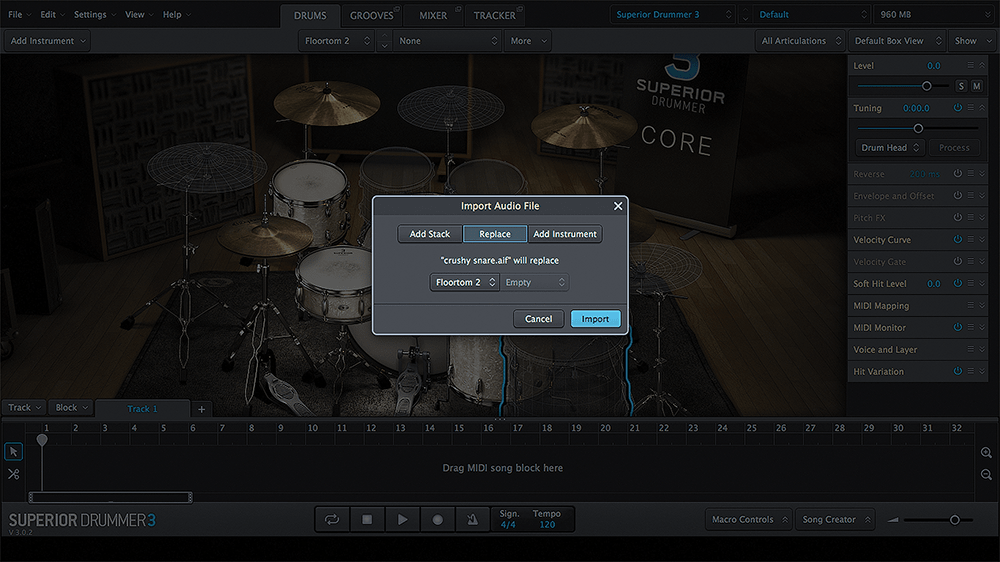 As well as using audio-to-MIDI conversion, you can import your own audio files to each instrument, as AIFFs or WAVs. You can also import MIDI files created in another DAW, and, come to think of it, export any that you create within SD3.

Once again, this all works whether you’re running SD3 in plug-in or standalone modes. Furthermore, you can continue to use any previously installed Toontrack sound libraries, including those from EZdrummer 2 and SD2, and any custom presets you created – the same goes for any existing Toontrack MIDI content.

After all this, it probably goes without saying that the SD3 kits and instruments are fully customisable. Right-click any instrument to quickly choose from a number of related replacement sounds, or go deeper to browse the library and custom content, or to import new samples.

A Properties box gives control options for each instrument, with volume, tuning, reverse, attack envelope, velocity, MIDI mapping, and much more. Furthermore, drum sounds can be stacked, so one MIDI note triggers two or more layers on the same drum – you can use any combination of sounds for these, and again, import new samples if needed.

Electronic kits are well represented, and just as easy to load or layer as acoustic ones… the kicks, for example, include sounds from Roland, Buchla, Simmons, Steiner-Parker and Synton, among others.

There’s not much to say about running SD3 as a plug-in, because effectively, it works the same way as it does standalone. Inside Ableton Live, I could trigger the kits from Push or MIDI clips, use Live’s macros to reach into the SD3 controls, apply Live’s audio effects to SD3’s main outs or individual channels, or direct MIDI tracks to any of SD3’s individual channels. 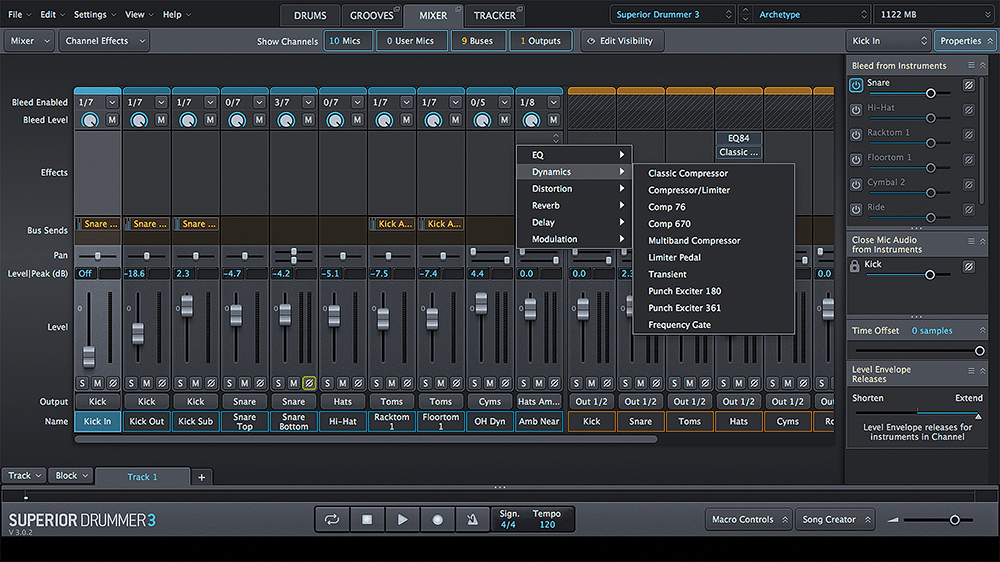 SD3’s mixer outputs can access all of the DAW outputs according to your soundcard. Song Creator is still there and the structures still work. When you start Live’s transport, your SD3 song will play, but if you start the SD3 song inside the plug-in, it’ll play without triggering Live’s transport. You never know, this could be useful for some crazy audio/MIDI/Timeline madness.

Some people just can’t get enough drums, though, and if you need that level of detailed control over every aspect of your drum sound, you’ll be all over SD3. Similarly, if you’re into building beats and grooves in a more ‘samplery’ style, you might not be convinced – this isn’t Maschine, for example – but the drum- machine sounds expand on the palette and reduce time spent building hybrid kits in other applications.

But all that aside, Superior Drummer 3 lives up to the title – the kits are great, I particularly rate the effects, and overall, it’s got the tools, options, content and the flexibility – everything, in fact – you need to deliver a full, organic drum track. 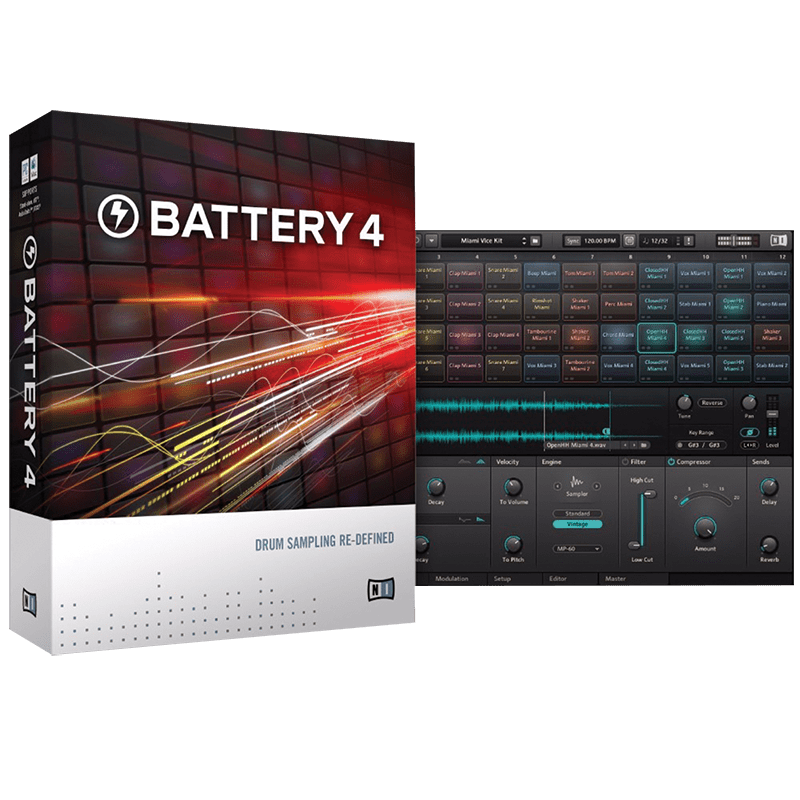 More focused on electronic sounds, but worth considering if that’s your thing. Battery supports virtually every sampler format ever, from Apple Loops to the Akai S1000, so it could be worth having as a sample utility, if nothing else!

Logic Pro X has many ways to create beats – by importing them, or by using Apple Loops, the EXS24 sampler, the Ultrabeat drum machine – but it also has Drummer tracks, for genre-specific virtual drummers – a great way to get an approximate drum vibe to customise.