Looking for out-of-the-ordinary drums and percussion from your EZdrummer? Matthew Mann gives Toontrack’s new EZX Dream Pop collection a run to see if it’s what the doctor ordered… 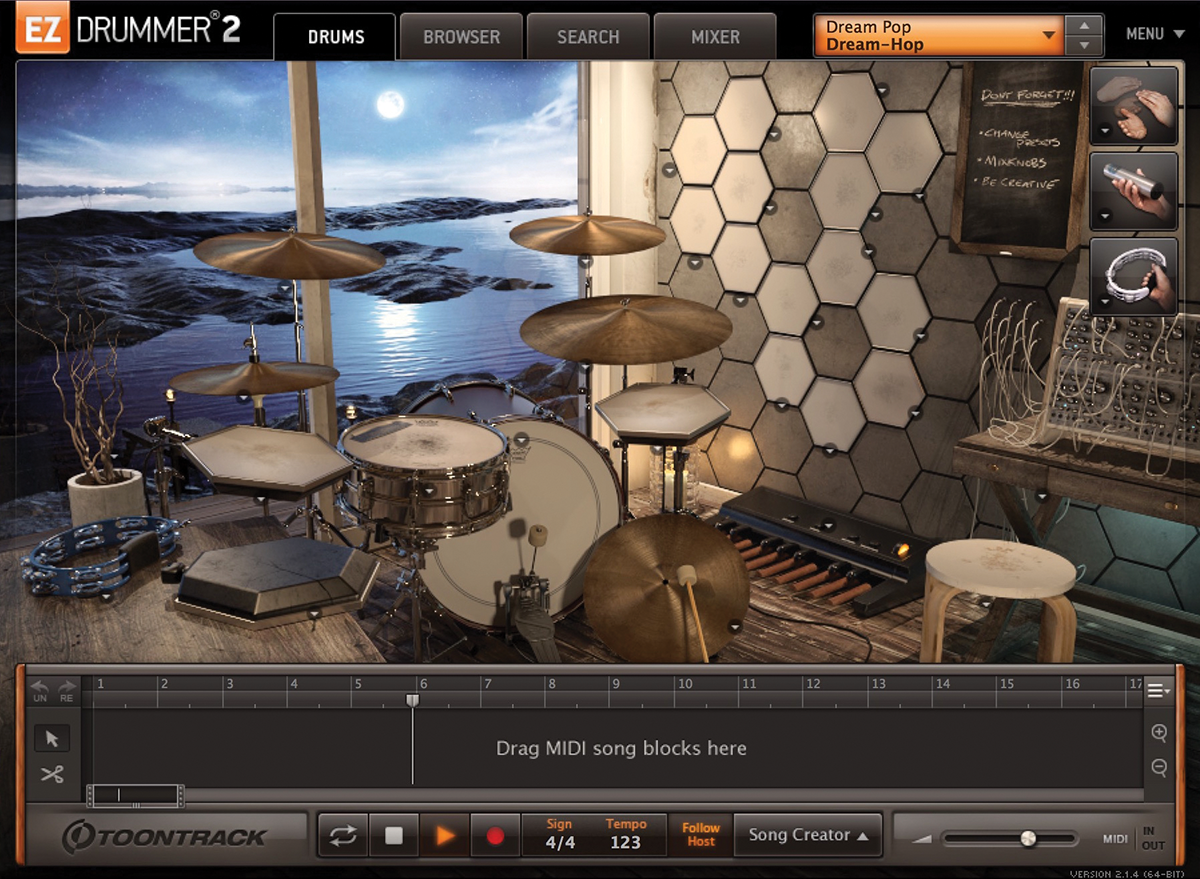 Several months ago, I test-drove Toontrack’s EZdrummer for the first time. During that test drive, I was checking out its then-new EZX pack, Classic Country. As you may recall, I was impressed with the authenticity of those drums and pretty excited by the whole drum package.

Since then, I’ve checked out several more of Toontrack’s EZX expansion packs, with mixed reactions. Now, it has released something altogether different called Dream Pop, which promises a mixture of acoustic drums and drum machines – as well as foley sounds and hybrid percussion samples that should give you an unusual arsenal of sounds and colours to work with.

First off – Dream Pop EZX adds a whopping 29 new kits. I was very surprised to see just how much is offered in this new collection, and each kit is unique unto itself. When you first open Dream Pop, you’re presented with a hybrid drum kit – acoustic kit and snare, cymbals and the like – as well as electronic pads.

In addition to the trap setup, there’s also a wall to the right which features several hex pads that can each be freely assigned to any of the sounds on offer. Many of the percussive FX consist of electronic or foley sounds that have been processed through analogue synths to give them unique sound and interest.

Below the hex-pad wall is a bass-pedal synth with options like pads, chromatic percussion, and other synth elements. There’s even a plucky mute guitar and a patch called ‘Sigur’, eveidently named in honour of a certain ethereal Icelandic band.

To the right of the synth image is a stool (the kind you’re meant to sit on). Even this is a percussive element with many options to choose from. This is where the foley elements come into play. There are quite a few percussive samples of foot stomping, hands clapping, things being smacked against drum hardware – there’s even the sound of someone knocking on the hull of a boat and more.

To the left of the kit are two other percussive elements – a tambourine and what looks like a small leafless plant in a planter. Both of these can be assigned to whatever you choose. All told, there are 32 areas of the screen that provide assignable percussive ‘pads’ for your percussive pleasure. Of course, each assignable pad allows you to change the pitch and volume of the sound assigned to it. This is a feature I really like. It makes it very easy to created tuned percussion.

Is it Really a Dream?

At first inspection, I couldn’t imagine using sounds like Hull Perc or Nut Percb in any kind of real production; however, after playing through these sounds and experimenting a bit, I found them more useful than I at first thought. I’ll admit that some of these foley bits need a bit of volume and pitch tweaking before they’re really useable, but once that’s done, they’re very good, and all the sounds are of the quality you’d expect.

I’ll admit I haven’t heard everything Toontrack has released, but this title is definitely a top-quality release with loads of interesting sounds that can lead you down the creative rabbit hole and into unexpected territory. I found myself creating several beats (just by experimenting with the sounds) that I don’t believe I’d typically have come up with using anything else. The three Gretsch kits (Muted, Open, Regular) are good, although a bit darker than I would have thought.

My favorite kit is called Happy and it certainly made me feel happy. Another kit of particular note is Stomp… If you’re looking to make the next folk pop hit, this kit is for you. Every other kit is interesting and, of course, you can customise them to your liking. 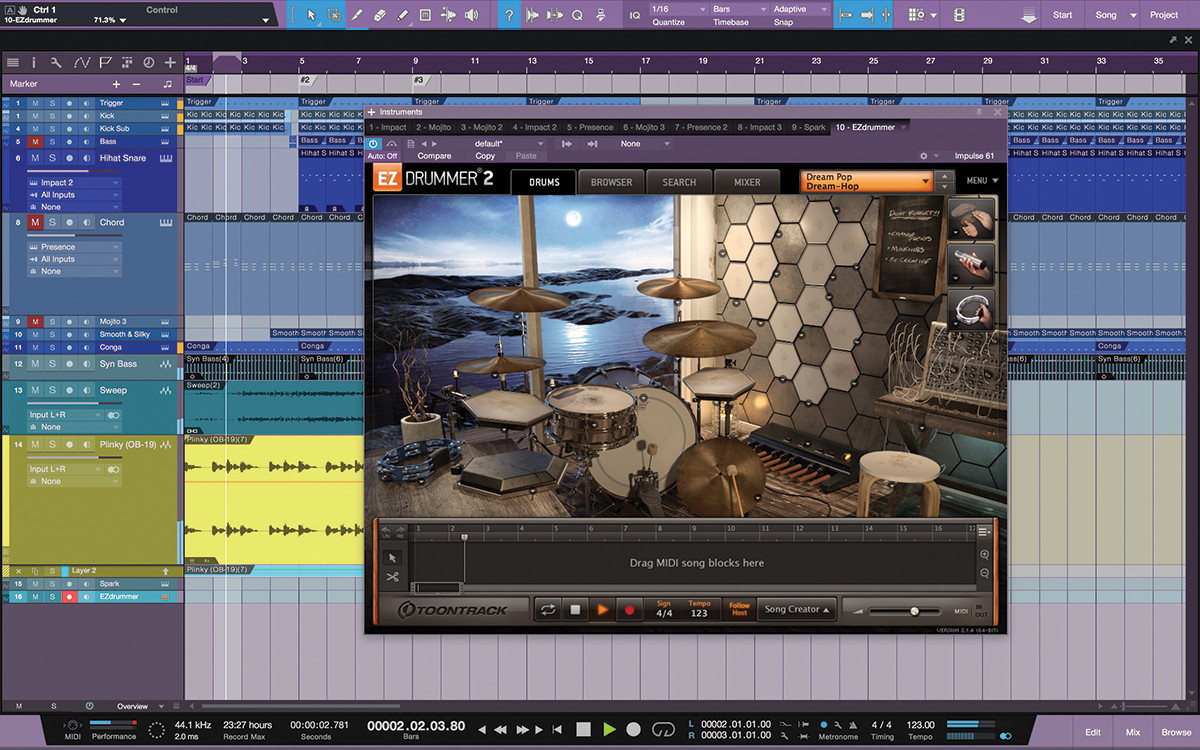 The MIDI song blocks included with Dream Pop are the only things that left me underwhelmed. To me, a MIDI song block’s functions should be twofold: First, it should provide lots of useful starting points for your own work. A tweak here, add or delete a note there and ‘Voila!’ – a perfect rhythm track for your production with minimal effort. Second, they should really show off the elements of the drum kit. Basically, they should really sell the user on what the whole pack can do.

The included MIDI song blocks with Dream Pop don’t really fill either of those requirements. As I said, on first inspection, I wasn’t overly thrilled with this EZX. I really think it was because these blocks didn’t really inspire me. Is that a reason to turn away from this expansion pack? No. Would it have helped to immediately sell me on it? Probably.

As I mentioned in my review of the Classic Country EZX, I really like EZdrummer 2’s song creator functionality, but I found it rather useless with this pack. To be fair, there are a couple of MIDI song blocks that were funky and fun but, overall, they just didn’t capture my attention or inspire me.

I ended up using some of Toontrack’s Pocket Grooves (I’m partial to the Brody Simpson grooves) or creating my own. I know that MIDI song blocks are not the selling point of EZX packs… but they should be part of it.

Overall, I was impressed with this expansion pack. I know you can’t please all the people all the time and this kit will prompt mixed reactions. Given a chance, I think many will find this a very interesting EZX with lots of cool percussion elements to take them somewhere unexpected.

I hope Toontrack will give more thought to its MIDI song blocks in future: these were really the only things holding this kit back from being my new favourite. Actually, I think it will still be my new favourite, as I find more and more ways to exploit these unusual sounds. 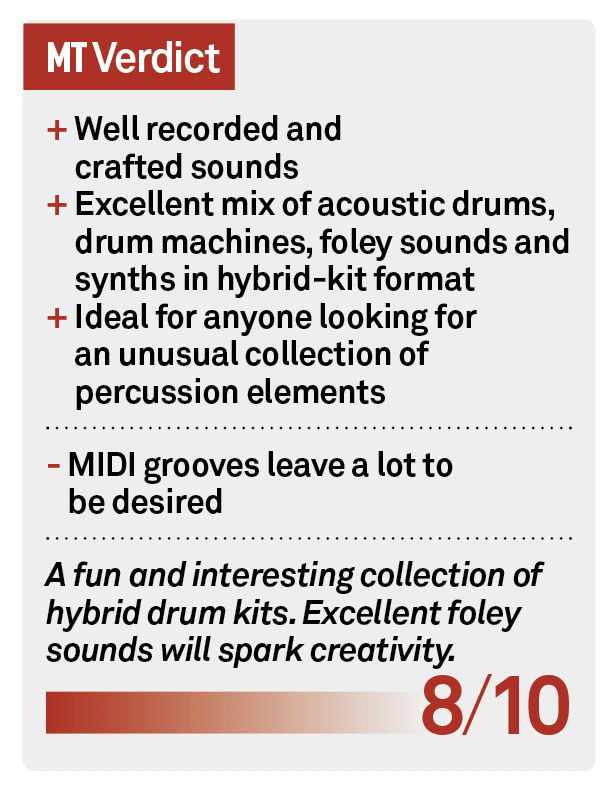