Chandler continues its reimagining of blasts from the past with this rackmount mic preamp, EQ and limiter. John Pickford plugs in to the TG Microphone Cassette… Details Price £2,899 Contact Nova Distribution – 020 3589 2530 Web www.chandlerlimited.com Following on from its superb re-imaginings of Abbey Road Studios’ late-50s/early 60s valve microphone preamplifier and compressor designs […] 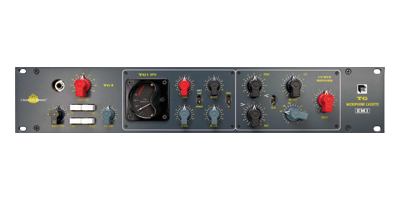 Chandler continues its reimagining of blasts from the past with this rackmount mic preamp, EQ and limiter. John Pickford plugs in to the TG Microphone Cassette…

Following on from its superb re-imaginings of Abbey Road Studios’ late-50s/early 60s valve microphone preamplifier and compressor designs (see our reviews of the REDD.47 and RS124), Chandler Ltd has returned to the solid-state TG series of equipment that first appeared in the late 60s. EMI installed the transistorised TG12345 mixing console in Studio 2 in November 1968, in time for its use on The Beatles’ Abbey Road. The TG desks would go on to be used to record many of the 70s’ greatest albums, including Pink Floyd’s seminal Dark Side Of The Moon.

Unlike the earlier valve desks, the TG12345 was a modular design, comprising various ‘cassette’ modules, with the Microphone Cassettes acting as the main recording channels. Chandler’s modern take on the vintage design reconfigures it into a standard 2U, 19-inch rackmount design.

A single-channel (mono) design, the TG features Chandler’s TG2 microphone preamplifier coupled with the EQ from the legendary Curve Bender equaliser. Added to this is a new TG1
opto-limiter based upon the design featured in each channel of the TG console; this was the first console to boast dynamics control for every one of its main channels.

While this unit fits into the relatively new category of audio hardware known as Recording Channels or Channel Strips, its configuration is a little different from most mic-pre/EQ/compressor channels. While the preamplifier and EQ sections are directly coupled, the compressor/limiter is independently operable, with its own dedicated input and output on the rear panel.

This means that the mic-pre and EQ can be used for one source, while the limiter processes an entirely different signal. Alternatively, the output from the Curve Bender EQ can be fed into the input of the limiter, via an XLR cable, to create a fully featured single channel strip.

Similar to the TG2-500 mic preamp I favourably reviewed a couple of years ago, The TG2 features a stepped Coarse Gain control along with a Fine Gain control which, when used at full pelt, provides 70dB of gain – that’s 10dB more than the little 500 unit.

An added feature on this unit is the Rumble Filter, a high-pass filter with six selectable frequency points between 33Hz and 110Hz. The trade off is that this new unit loses the 300/1200 ohms impedance switch; however, this is a more-than-fair swap, as the filter is
far more useful than the subtle effect caused by impedance switching. As you’d expect, the preamp provides switches to select Line or DI sources, 48V phantom power and phase invert.

The Curve Bender equaliser is an expanded version of the EQ section found on the original TG consoles, comprising Treble and Bass controls along with a five-band Presence control. Treble is presented as a shelving boost/cut EQ fixed at 8.1kHz while the bass shelf is fixed at 91Hz.

Presence boost and cut is available at 300Hz, 500Hz, 1.2kHz, 3.6kHz and 6.5kHz whereas the 1960s TG desks offered only 500Hz, 1.2kHz and 6.5kHz. The main Output level control appears on this section of the unit and is operable even when the EQ is bypassed. In normal operation, turning the Output fully clockwise represents unity gain.

While the preamp and EQ sections are quite straightforward, the limiter’s operation is rather unconventional and takes some getting used to. It’s an adaptation of Chandler’s TG1 limiter with an opto cell and a unique set-up method requiring the user to abandon any knowledge of conventional gain-reduction metering.

A full description of the set up would be confusing without a hands-on demo; however, the basic idea is that dynamic range is determined by adjusting the unit’s Hold control with no audio passing through the limiter. This Hold control shouldn’t be confused with the Hold control on Chandler’s RS124 compressor, which behaves in a completely different way.

Conceived as a ‘dynamic range reducer’ that reduces transient peaks while amplifying quieter signals, this section of the Microphone Cassette provides more user-adjustable controls than the original 1960s consoles. Rather than the fixed attack time and six-position release time control available on the TG desks, this has fully adjustable response-time settings and an Output (gain make-up) control.

Compression Ratio is determined by using the switch marked Sharp/Rounded, with the Sharp setting mimicking the limit setting found on the TG desks. This setting was originally designed to mimic Fairchild 660 limiters used with old EMI REDD valve consoles, while the new Rounded setting provides a gentler compression knee.

Like all the Chandler products we’ve tested, the TG Microphone Cassette is well built and laid out in keeping with the late-60s-designed desks that inspired it. In other words, it would have looked like cutting-edge, state-of-the-art technology at the time, but now looks retro-cool with its chicken-head- style knobs and curved VU meter.

Having used TG series microphone preamplifiers and Chandler’s Curve Bender in the past, I had a fairly good idea of what to expect from the new unit. The preamp exhibits a bright yet full-bodied sound that flatters most audio sources, imparting a lovely gloss to the upper registers. It’s a presentation that works particularly well with microphones that emphasise the midrange, such as our slightly dark-sounding Neumann U67 valve condenser and Coles 4038 ribbon mic.

The API Channel Strip (£2,400) is a single channel mic-pre/EQ/compressor based upon the classic API consoles of the 1970s. It features a three-band equaliser along with a compressor that includes a unique Thrust setting for that in-your-face sound.

Thermionic Culture’s Phoenix HG15 (£1,872) is a high-gain compressor with enough drive to be used as a microphone preamplifier. It also features comprehensive controls for Presence and Air.

TG Microphone Cassette – In Use

For a clean, expansive tone, you should start by keeping the main Output control at maximum (fully clockwise) and adjust both the Coarse and Fine Gain controls to achieve optimum signal level. For a harder, grittier tone, ease back on the Output control and increase the input gain until the signal sounds overdriven and hot.

In practice, I first used the TG in conjunction with an AKG C414 to record an acoustic guitar overdub, with the rumble filter set to 47Hz and 4dB of treble boost. Setting up the limiter/compressor was tricky at first, as it’s easy to go over the top and squash the life out of the signal. Easing back on the main Output control and using medium-fast response times in Rounded knee mode tamed its aggressive nature, resulting in a smooth, rich tone with plenty of clarity.

Eager to get to grips with the limiter, I strapped it across a previously recorded lead vocal, making use of its dedicated input and output. Set to Sharp (limit mode), I was able to achieve a nicely levelled signal with excellent presence and intimacy. Knowing the extreme dynamics control the unit is capable of, I couldn’t resist feeding it a mono mix of drums to check out the TG’s Fairchild-like limiting powers.

Plugging a bass guitar into the DI input of the TG Microphone Cassette and experimenting with EQ and compression resulted in a variety of useful tones that really showed off the powerful nature of the unit.

Overall, I found the TG Microphone Cassette to be an extremely capable performer, presenting a big, slightly forward, yet smooth sound. With 70dB of gain on tap, I never felt as though the preamp was in danger of running out of puff, even when using our insensitive Coles ribbon mic. It doesn’t have the punch or top-end sweetness of Chandler’s REDD.47 mic-pre, however the bottom end is smoother, cleaner and digs deeper than the valve unit.

The equaliser is lovely to use with well-chosen presence points and musical top and bottom shelves. The treble boost is particularly good, giving a noticeable broad upper treble sheen rather than air and sparkle.

My only concern is the unusual configuration of the limiter/compressor may be out of place on a recording channel such as this. It’s certainly a powerful dynamics controller that’s very versatile once mastered, but I’d prefer something a bit more intuitive to use.

Nonetheless, those who take the time to get to know their equipment inside out will be rewarded with an excellent microphone preamplifier coupled with a superb, musical equaliser. With the added bonus of a dynamics controller that can be used in conjunction with or separate from the mic-pre/EQ to perform both gentle peak-levelling and fierce, pumping compression effects, the TG is a great comprehensive analogue channel 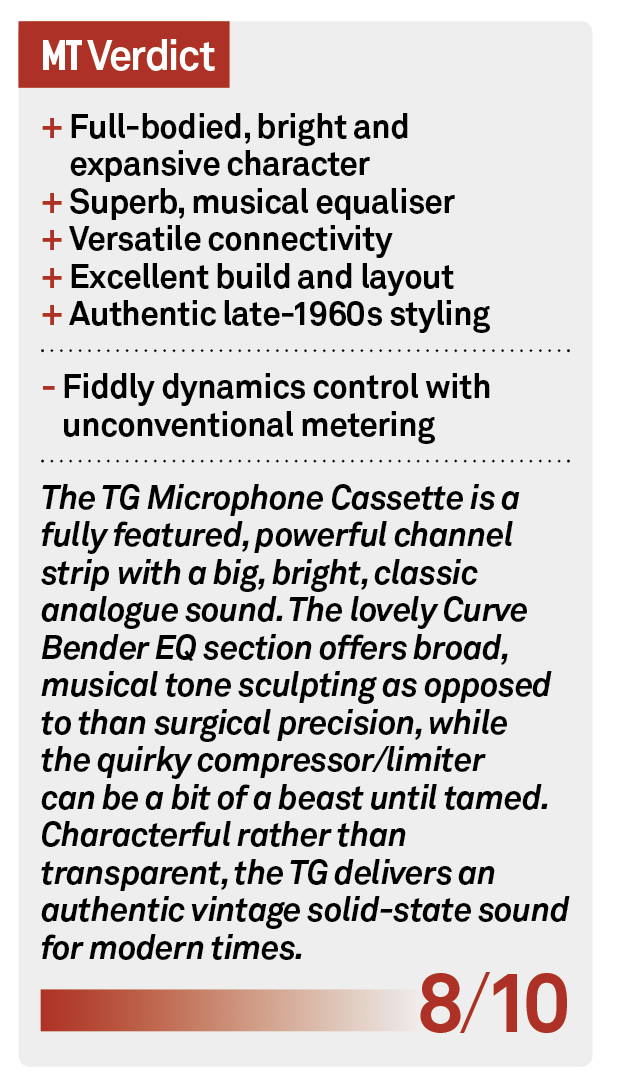