Three ‘calculator style’ synths, each less than 50 quid a go. They’re as light as air but sound as dark as hell. ‘What’s not to like?’ asks Andy Jones Details Price  £49 each Contact Teenage Engineering This year’s NAMM show in the States had the usual brass band and bluster, the usual big name artists […] 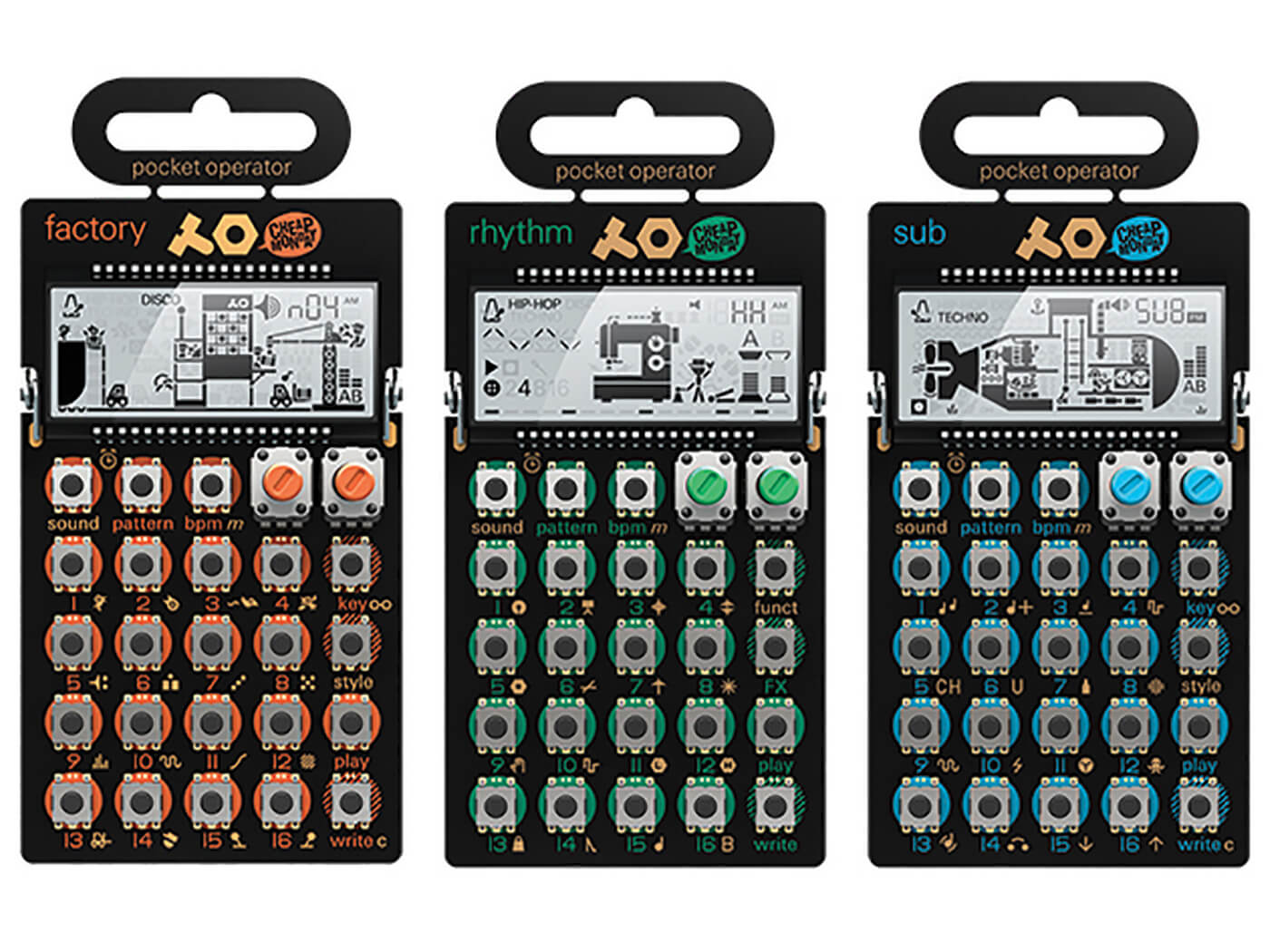 Three ‘calculator style’ synths, each less than 50 quid a go. They’re as light as air but sound as dark as hell. ‘What’s not to like?’ asks Andy Jones

This year’s NAMM show in the States had the usual brass band and bluster, the usual big name artists wandering the halls in search of/blagging gear and the usual big names in music technology delivering it – in both hardware and software form – in spades. But it also had something else, something to take you back to the point of it all.

So in halls where the likes of global companies like Korg and InMusic displayed their wares you also had the likes of Buchla showcasing their synth cases. In Hall E, the crazy hall, there were more bespoke modular synth companies than ever before. And in the midst of Hall A, at the centre of the tech area, Teenage Engineering was literally stopping the show. With what seemed like three calculators…

No I’m not going to call this bit ‘Teenage Kicks”
The Swedish company’s ‘stand’ might have looked decidedly low tech – a table and some cardboard boxes – but it was the one stand that everyone was talking about and everyone with a trendy haircut was bustling around. The Pocket Operator range of what looked like calculator synths was the reason, set up on said table, ready to beat, bleep and drone at any passing hipster’s whim. And so much beeping and droning did they beep and drone that they instantly became the stars of NAMM 2015…

Three Into One
So a quick overview of all three units is due as they all operate in a very similar way even though each sounds different. So you get the PO-16 or Pocket Operator ‘factory melody micro synthesiser’ to give it its full, rather convoluted name – we’ll call it ‘factory’ from now on. Then there’s the PO-12 rhythm programmable rhythm synthesizer for beats, and finally the PO-14 sub bass line micro synthesiser for, you guessed it, your bass.

Each unit has a 16-step sequencer of which you can select 16 sounds to program up to 16 patterns of which 16 can be chained. There are two knobs on each one that serve a variety of functions including tweaking individual sound’s pitches, for example.

Shared modes include Sound for selecting your sounds and tweaking them with the aforementioned knobs; Pattern, for selecting and playing your 16-part riffs; BPM for changing the tempo between Hip Hop (80bpm), Disco (120) and Techno (140bpm, aka slow, medium and fast – although these can be fine-tuned); plus Play and Write modes for playing patterns, writing them and editing sounds.

There are also global functions common to all three units like setting the time and alarm clock (yes you can use them as old school digital clocks), and also setting the overall master volume. Here you press the BPM button and activate the grid lights; the more you press the higher the volume and each unit gets surprisingly loud given their physical size.

Other Modes not necessarily common to all include various effects which we’ll come to and Function and Style modes. 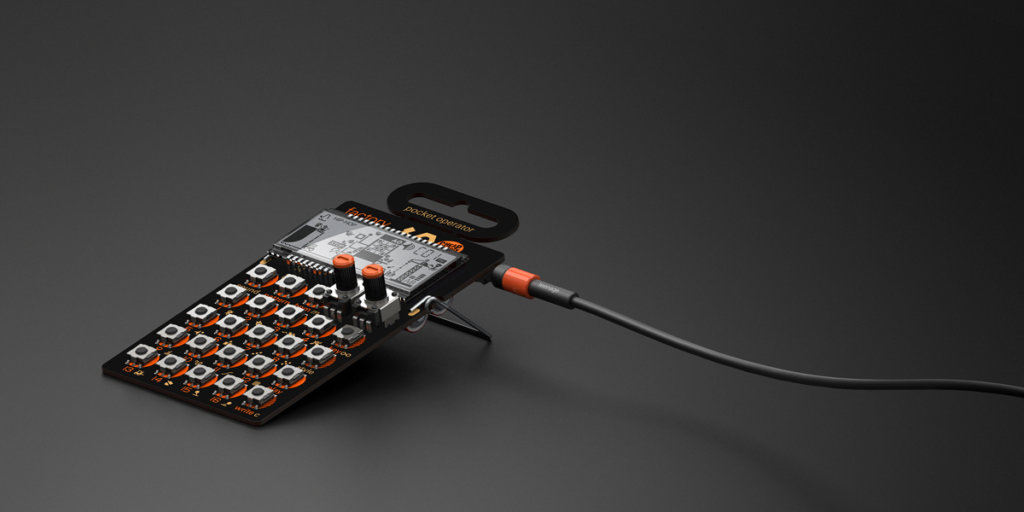 Each unit can stand at an angle and has both audio and sync outs so you can add it to a bigger set-up or chain the units together.

In Use
Get to grips with one of these and you’ll get to grips with all three but PO-12 rhythm is probably the most straightforward to use and understand from the off. Connect the batteries in what we can loosely call the battery compartment. (It’s a couple of wire clips very much representing the home-made style of each Pocket Operator. The units are fairly solid in build, yes, but very much open to the elements and if you, like me, are over 35, you’ll probably think the case is missing and you’re simply holding the circuit board.)

Batteries now in – and they’re hard to get out again – the unit powers up to reveal what looks like a sewing machine on screen. Which is a nice touch if you are going to take any notice of the screen but actually I found myself largely ignoring the fun stuff like this in favour of the more practical symbols and lights on the keys themselves, only turning to the LCD screen occasionally.

The best thing to do is to press the Play button straight away to play a pattern which you’ll see cycle through 16 red LEDs. Select another pattern by using the Pattern key as a ‘shift key’ and a Number key to select one of the 16 patterns on offer. You can either play along with each pattern or easily add and subtract sounds from one by hitting the Write button, using the Sound button as a shift and then selecting one of the 16 sounds.

Now the 16 lights of the sequence indicate which of the 16 is ‘filled’ with that sound, so you just hit a number to lose or add the sound on that part of the sequence, just like you would on a hardware or software step sequencer – very easy. Beat sounds come by way of the first 13 parts with three tonal parts from 14 to 16 (comprising blip, tone and bass note).

A very neat touch worth noting here is that changes made using the two rotaries can be recorded in real time, so hit the Write button again and all your twiddlings – say, changing the pitch of any sound – will be recorded in real time over the cycle of the pattern. This also works with the Effects section which we’ll talk about later. Finally you can chain the patterns together by holding the Pattern button down again and then hitting the pattern number buttons in the order in which you want them to play.