It’s been a while since the first Pocket Operators wowed us, but now the third ‘metal’ series is complete with the addition of the PO-33 and PO-35. Andy Jones is your operator… Price £85 each Contact Teenage Engineering | Sound Technology Key features: Hand-held sequencer and samplers Microphone for sampling Built-in speaker, 3.5mm I/O Animated […]

It’s been a while since the first Pocket Operators wowed us, but now the third ‘metal’ series is complete with the addition of the PO-33 and PO-35. Andy Jones is your operator… 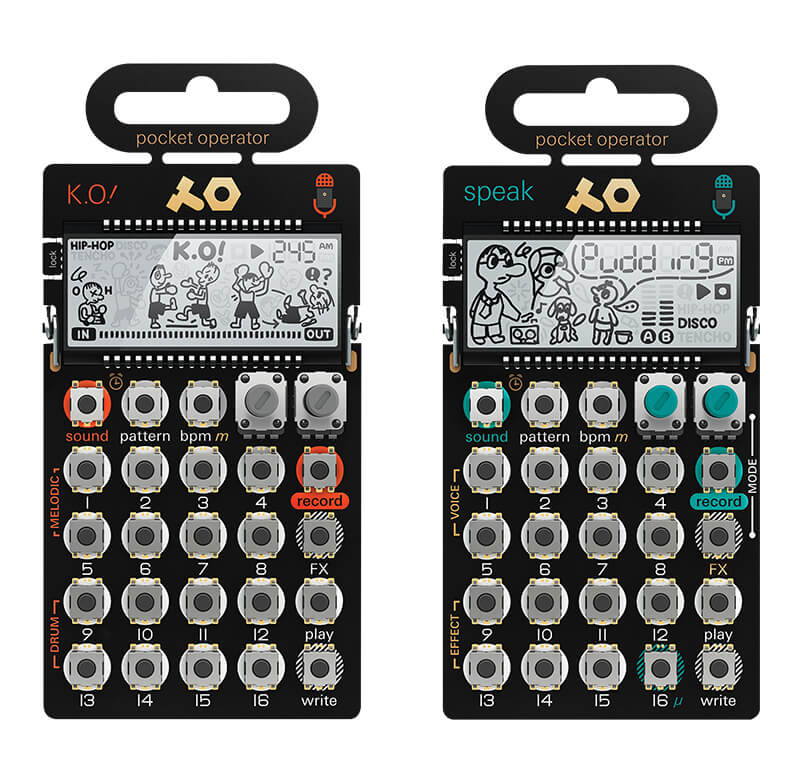 If you are new to the Pocket Operator concept then you’ve missed a fair bit. They are, essentially, mini hardware music makers that specialise in different areas of music production. They feature a sequencer and most are very capable of creating and evolving interesting beats, basslines or even complete tunes. They look like unfinished calculators, which is all part of their rather odd appeal.

The original PO series was announced over three years ago at NAMM and quickly became a MusicTech favourite. The PO-12 rhythm specialises in beats, the PO-14 sub focusses on bass and the PO-16 factory does synth sounds. I loved them.

They were – and still are – bundles of musical innovation. “Great fun, smashing sound from such a small unit and incredible value. You’ll want all three and there are probably more on the way. Can’t wait…” I gushed. I was right about there being more…

A year later the PO-20 series arrived: the PO-20 arcade, PO-24 office and PO-28 robot, all based around those titles’ respective bleeps and beeps. Again, they were a joy if a little more specialist in their sounds. “I doubt there are any other products anywhere on the planet with which you can have so much musical fun and creativity, and that cost so little cash,” I beeped.

Taking us a little by surprise the PO-30 Series was initially just a single unit – the PO-32, probably my favourite of the lot so far. This one paired up with the excellent Microtonic drum software, with hardware and software able to swap presets. In use it becomes almost a hardware version of that software – the first of a kind for any hardware, and a device that reverses the recent trend in music technology circles where a lot of classic hardware has been recreated in software.

A year on and the final (I assume) two in the PO-30 series are here, the PO-33 K.O! and the PO-35 speak. No, the numbering doesn’t make sense but the 30 Series does share a metallic finish on its boxes and Teenage Engineering is calling it the ‘metal’ series. So are these worthy additions to it?

The same but different

Design wise, you’ll be at home if you’ve used any of the PO models before. You essentially get a 16 part pattern which you fill in with a variety of sounds and can chain up to 128 of these together to make a song.

Build-wise they’re still what some might call flimsy (optional cases are available at a quite pricey £35), but in operation, they are as easy as ever to get your head around, although a number of dual button (shift-like) functions will need to be mastered. These two do also have all new features, which I’ll detail by model.

On the 33 you get eight melody slots and eight percussion slots and a total of 16 sounds which seems a little tight. However, you get a total of 40 seconds sampling time so you’ll soon realise this is more about creating your own noise. 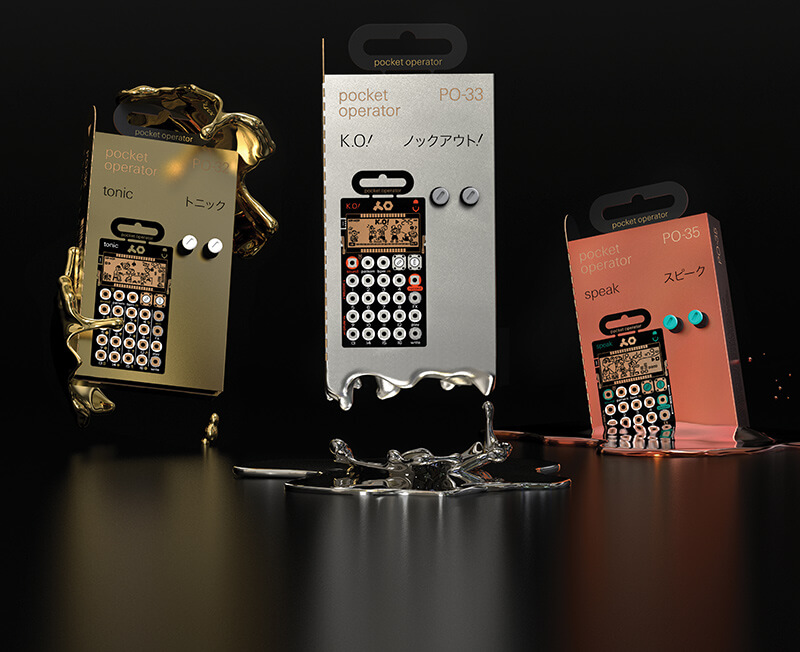 You can also make real-time adjustments and edits to sounds using the two rotaries which gives surprisingly varied results as there are six parameters to tweak (Start, End, Frequency, Resonance, Pitch and Volume). Add 16 effects into the mix and you have a lot to play with.

Recording is as easy as you like. Just hold the Record button and any of the number keys 1–16 and what you record becomes the sound in that slot to be used in a pattern. For example, I used all of my creative resources to make my first recording, the word ‘one’ which I stored in location ‘1’.

Adding that sound with different pitches, from Barry White to a squealing pig, is as simple as placing it in a pattern location while twisting the left dial to adjust pitch. Start messing with the real time performance effects and you’ll have a jittery, slippery tune in no time. Never has so much fun been had within 30 seconds.

I’d say that the 33 is more about beats and stretching them in ways you never imagined. You can create entire tunes, but with less raw melodic ingredients you’ll probably find yourself creating rhythmic patterns rather than overtly melodic ones.

However, use that 40 seconds creatively (and far more creatively than recording the word ‘one’) and there’s no telling what you’ll get out of it – pretty much what you put in and then twisted beyond belief. That’s the beauty – it’s up to you.

If you want vocals, then that is where the PO-35 speak comes in. This one is, as you’d expect, exactly the same in terms of architecture and it also has sampling. This time, however, you get a whopping 120 seconds in total with a maximum of eight seconds per sample.

It also comes with 16 vocal type sounds to get you going, eight effects and four adjustable parameters to tweak (Start, End, Pitch and Time) so again there’s enough to twist, turn and edit. You also get 16 percussion sounds courtesy of Microtonic, accessed through sound number 16, so beats are catered for too.

You might think there’s a lack of sound variation but all of the original samples are very varied and dialling through the excellent patterns reveals PO-35 to be a very cool sounding beast. Obviously there’s a vocal emphasis but the genres go from bass distortion to disco chic and if you’re as old as me, a lot of the sounds might take you back to watching Kraftwerk on stage using real calculators to make music. The whole PO-Series must owe something to those performances but PO-35 in particular seems to be the biggest tribute.

You absolutely don’t need a Pocket Operator, especially if you are locked to your DAW and make music totally within that environment. But what these will do is offer you a way out of that environment – a break, if you will. 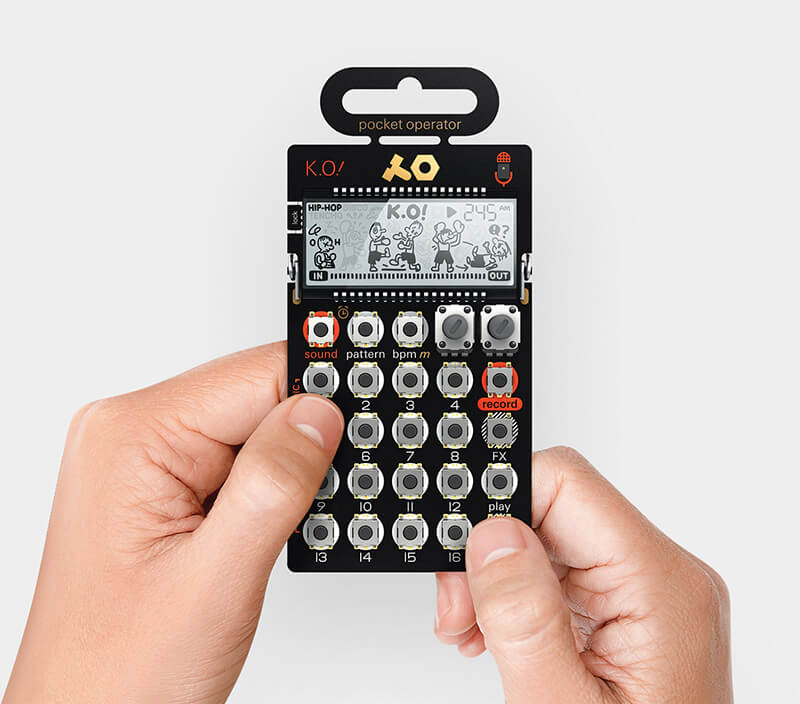 And these especially might even get you out and about recording, get some fresh air, some sun on your skin, make some music without a computer. Maybe even perform it. So in that sense, maybe we all need one…

As Teenage Engineering’s Pocket Operator series has increased with number, each group of three has perhaps become a little more specialist. So you’d have thought that would make them progressively less usable in terms of sonic flexibility. But actually the 30 series overcomes this by letting you become the master of what you record. You put garbage in, you’ll get it out and that’s your own damn fault.

With both units, though, Teenage Engineering has added enough tools around what you record in to enable you to create some very easy beats and patterns, and do that very quickly indeed.

If you want to create a tune before your computer has even booted up, then you’ve come to the right place. And the editable parameters allow you to shave any silence from your recordings and the on-board effects make performing patterns super easy and the results are super-cool sounding.

This does mean you might have to be a tad more creative with both units to get the results that were perhaps a lot more easy to attain with the PO-10 and 20 series, but I found myself returning right back to the sampling days of the late ’80s when I had 16 seconds to play with and made do with it. You get more creative within those kinds of limitations and, while these aren’t anywhere near as limited as the Cheetah sampler I had, they do spark that creative thinking which has to be a good thing.

They’ll not be for everyone, but both the PO-33 and 35 have effortless pattern creation and a flexible architecture in which to load in your own ideas and then explore and explode them. And, most importantly, you can take them anywhere, record anything and mess with it to your heart’s content. In that sense, then, they are the most sonically creative Pocket Operators so far.

Pricier but also more substantial (and in some cases analogue), the Volca range has been expanding as much as the PO series and now does sampling, FM, acid and more, and it really does all of that well, especially the FM one.

I reviewed the update to this last year and it’s a fantastic all-in-one synth, sequencer, radio(!) and a lot more. It’s like all the best bits of TE’s philosophy in one unit with a very playable keyboard.