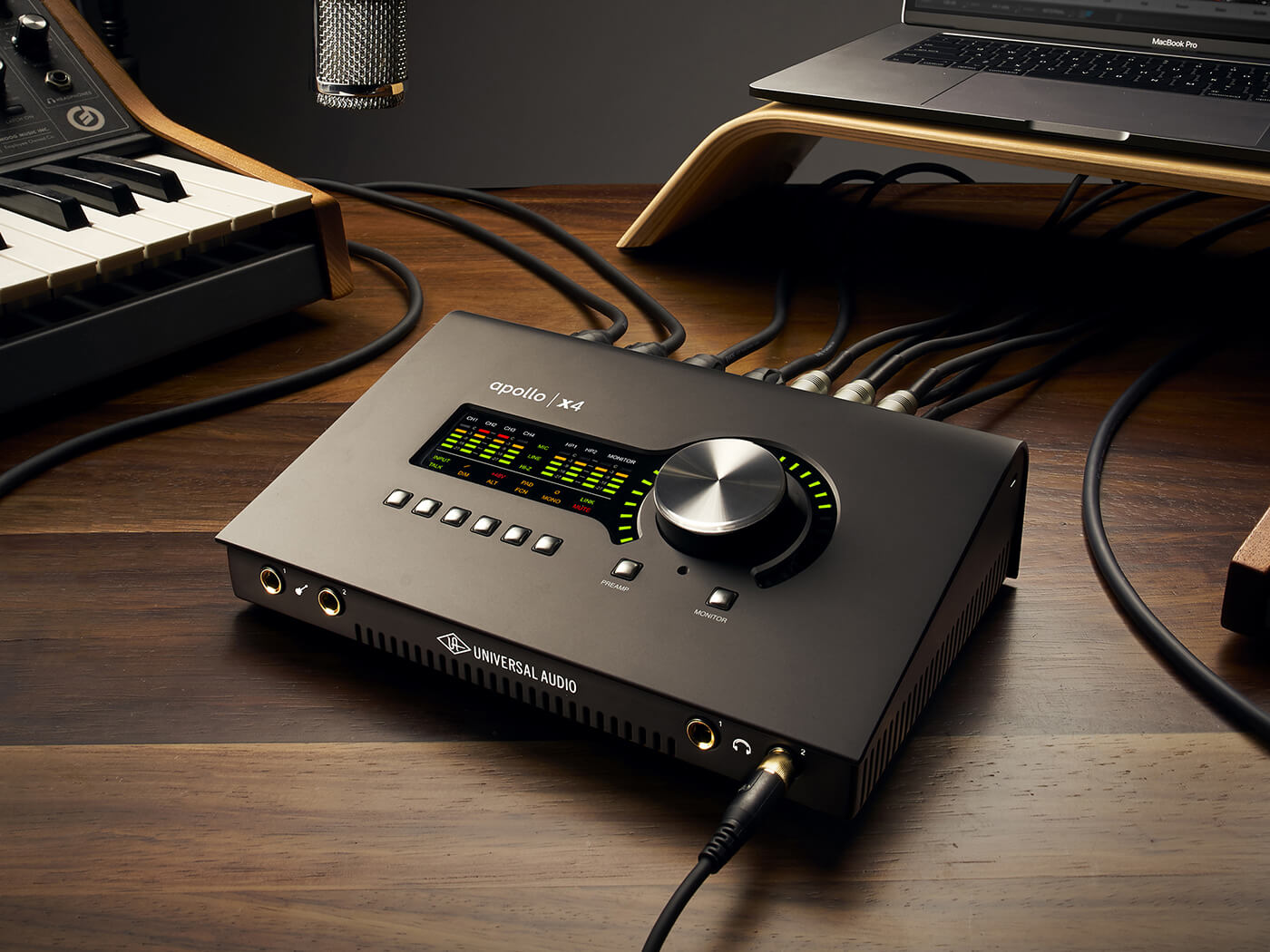 Dedicated DSP processing in an audio interface is very much in vogue at present, with a number of mid-to-high-end units coming out from new entrants to the market over recent months. Interesting though these offerings have been, none have yet quite achieved the seamless integration between DAW and external DSP offered by Universal Audio’s platform. This isn’t really a surprise given how long UA has occupied this particular niche of the market: audio quality is largely a given with these higher-end interfaces, but UA’s DSP technology is mature, and the platform is flexible and open enough to allow third-party developers to create plug-ins for it (albeit under license from UA).

The latest addition to UA’s ever-growing range of Apollo audio interfaces is the Apollo X4. This compact desktop unit connects to the host computer via Thunderbolt 3 (cable not included – grrr!), and features a UAD-2 Quad DSP chip capable of serving up a good number of simultaneous effects (the exact number depending on the effects in question, the sample rate, and so-on). I/O is serviced via four analogue inputs, six analogue outputs, two independent headphone outputs, and up to eight channels of digital I/O via a pair of ADAT / optical SPDIF connectors.

All four analogue inputs are of the mic/line variety, with the first two also having hi-z instrument inputs located conveniently on the front of the unit. The first two outputs are given the role of being the main monitoring output, but you can also designate the remaining outputs as alternate monitor feeds, which can be switched from the unit or from the UA Console software mixer (more of that in a mo’). 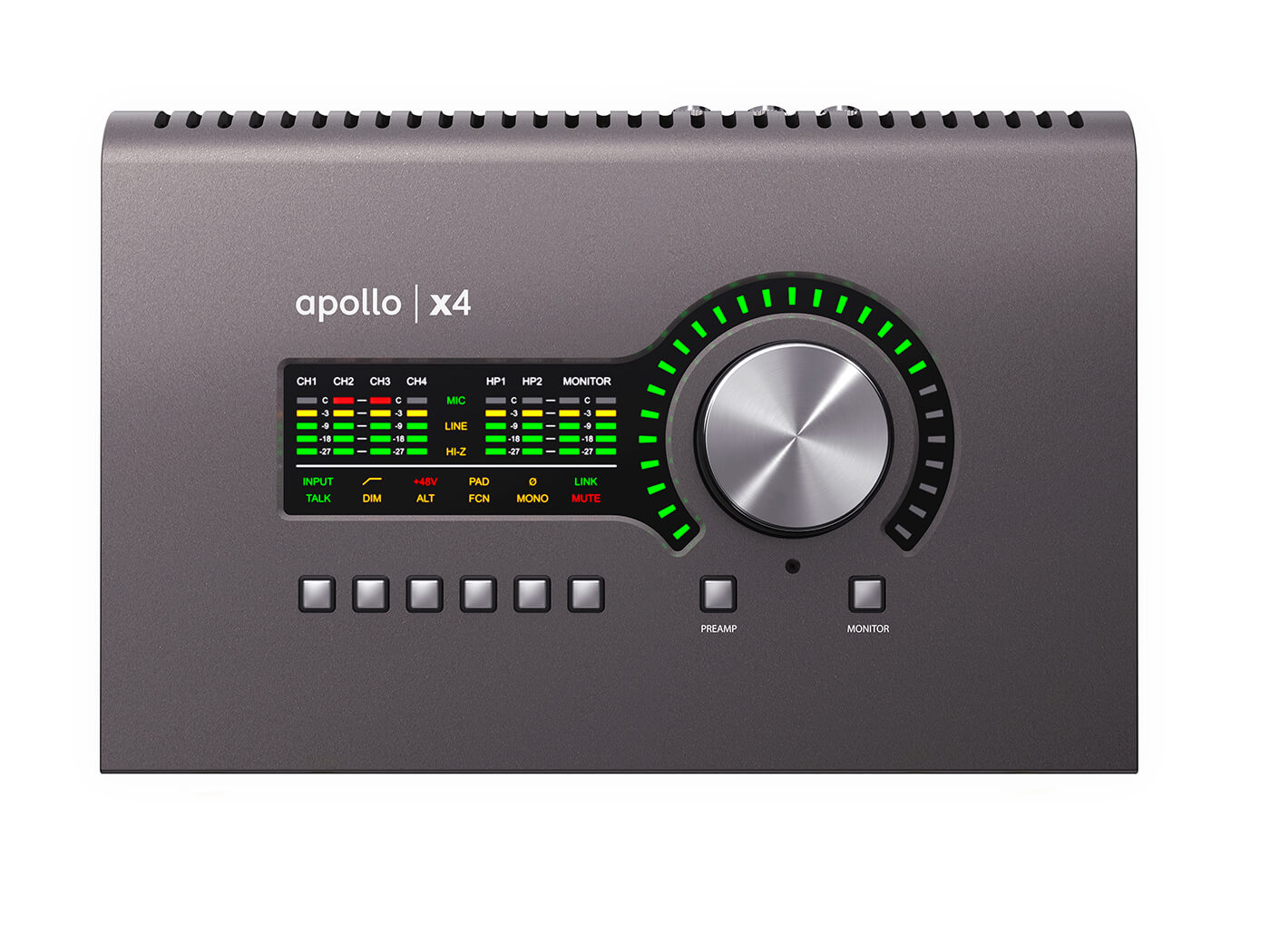 The Apollo X4’s top surface is dominated by a pleasingly large and smooth-running data entry knob. The main function of the knob is control of the main monitor output level – which is very convenient to have to-hand. The dial is also used for setting the output level of the two headphone outputs, which are located on the front panel, as well as for setting the gain of the input channels. Switching the dial between its different control modes is as simple as tapping one of the two buttons situated underneath it, whilst the ring of LEDs that surround the knob indicate the current value of the selected parameter.

Alongside the data entry knob is a meter panel. This shows the current signal levels for all four input channels, as well as the output levels of the monitor and headphone channels. The row of buttons that lie beneath this panel have different functions depending on whether the dial is controlling input channels or output channels (something that’s clearly shown on the meter panel).

For example, when controlling monitor or headphone levels, the first of these buttons engages the built-in talkback mic, whereas when working with input channels the same button switches the currently selected input channel between mic and line operation. The options are clearly shown, lit up on the meter panel, and it’s all very intuitive to work with. Of course, all of these controls and functions are also accessible from within the UA Console software too.

The Apollo X4’s input channels all feature UA’s Unison preamp technology, which is essentially an input conditioning and digital modelling technology that straddle both the analogue and digital domains. Unison plugins are assigned to an input using the UA Console software, and from here the plugin can modify the characteristics of the analogue preamp circuit and apply processing to the signal once it’s been converted to digital.

This allows the Unison preamps to produce very accurate emulations of high-end and classic analogue input channels, as well as allowing them to be turned into full-on guitar or bass amp stacks and other analogue processors. What’s more, with the processing being performed by the Apollo using DSP hardware dedicated to the task, Unison input processing is virtually latency-free. 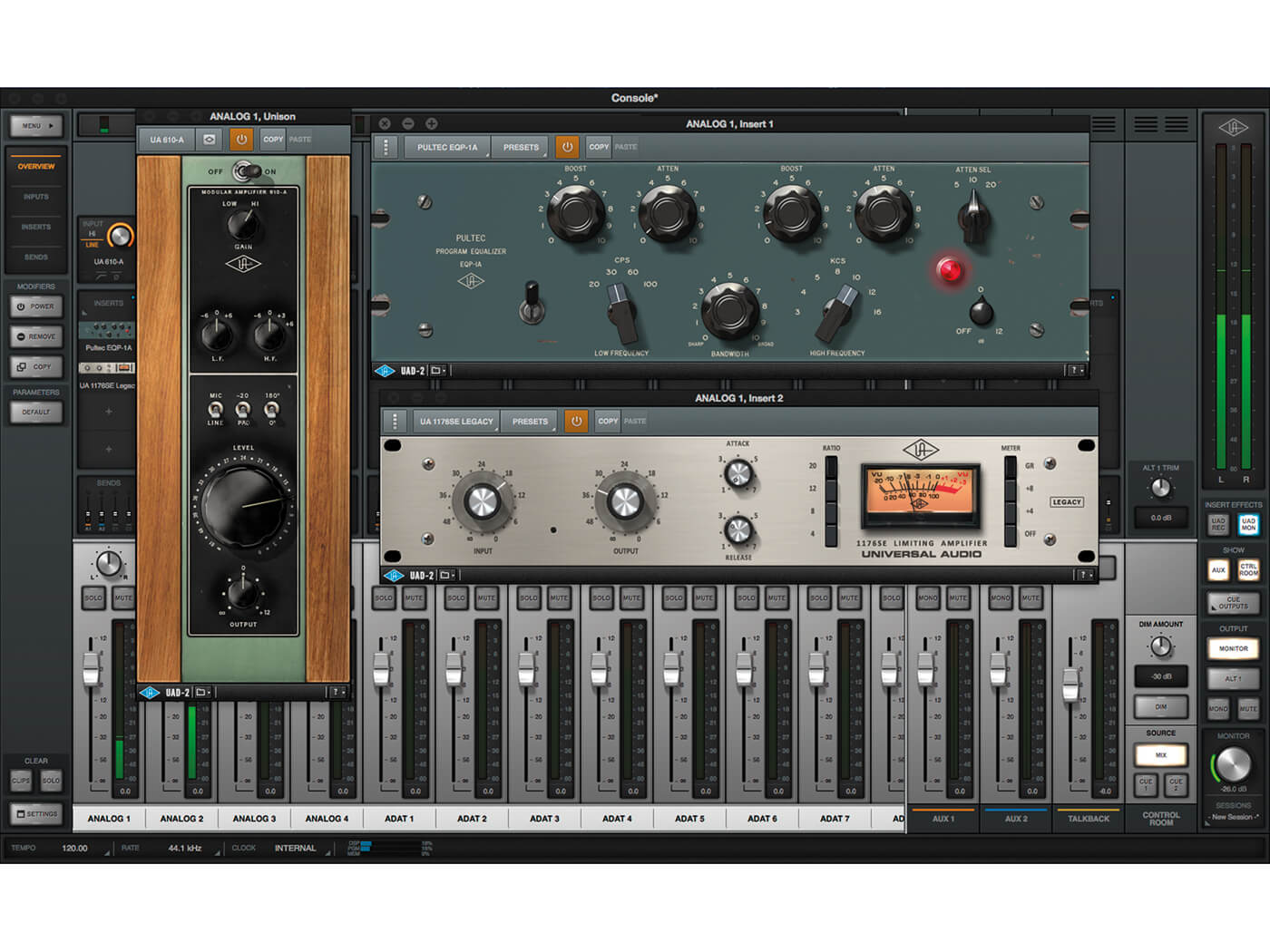 The input channels have an additional four insert effect slots, which can host any of the more-than 100 UAD plug-ins that are available from UA’s store. These inserts are, like Unison plug-ins, virtually latency free, and what’s more, you can choose whether to send the unprocessed or processed signal to the DAW for recording. This allows you to apply latency-free effects on the direct monitor feed – some reverb and compression for a vocalist to work with, perhaps – whilst recording the dry preamp signal (albeit with Unison plug-ins applied, which are always part of the recorded signal). Alternatively, if the effects you are inserting are intrinsic to the sound you are recording, they can just as easily be included in the recorded signal.

The same UAD plug-ins are also available within the DAW too, where they process the playback rather than the input signal so you can, for example, add the same plug-in chain on playback that you’re using for input monitoring, but keep all of your options open by recording the dry signal rather than the one being processed in the UA Console. When used in a DAW the plug-ins are exactly the same as any other plug-in to work with – no special wrapper plug-ins or similar are involved, and so you are barely even aware of the difference between UAD and other VST plug-ins. The only difference is that with UAD plug-ins the processing is palmed-off to the Apollo’s DSP chips rather than consuming host system resources.

The Apollo X4 comes with UA’s Realtime Analog Classics Plus plug-in bundle that contains a good range of processors to get you going, including some fabulous models of original Urei and Teletronix dynamics processors, a set of Pultec EQs, Marshall and Ampeg guitar and bass amps, a couple of reverbs and delays, and more. Some of these include both Unison and standard versions, so you really do get a lot of toys to play with straight out of the box. In fact, all UAD plug-ins are installed along with the driver and Console software, and you can load any in a time-limited demo mode with just the click of a button. Licensing new plug-ins is also extremely simple, and UA is almost constantly running some promotion or other, so if you’re canny and sign-up to UA’s mailing list, you can save a fortune on UAD plug-ins.

Despite its compact size, the X4 is a grown-up audio interface with excellent features and superb audio quality. Having the Unison preamps on all inputs is fantastic, and sets the X4 above some of its larger, rack-mounted stablemates (which, incidentally, it can work alongside to provide additional DSP and I/O to your rig). At around £1,600 it’s not the cheapest compact desktop audio interface you’ll find, but it’s certainly one of the best.

One of the most important parts of any studio is the audio interface, as it has far more bearing on the quality of your recordings than almost any other aspect of your studio. Adding dedicated DSP to a studio isn’t as important perhaps, but it does bring distinct advantages, such as allowing low latency effects on direct monitor signals, and easing the host computer’s workload. 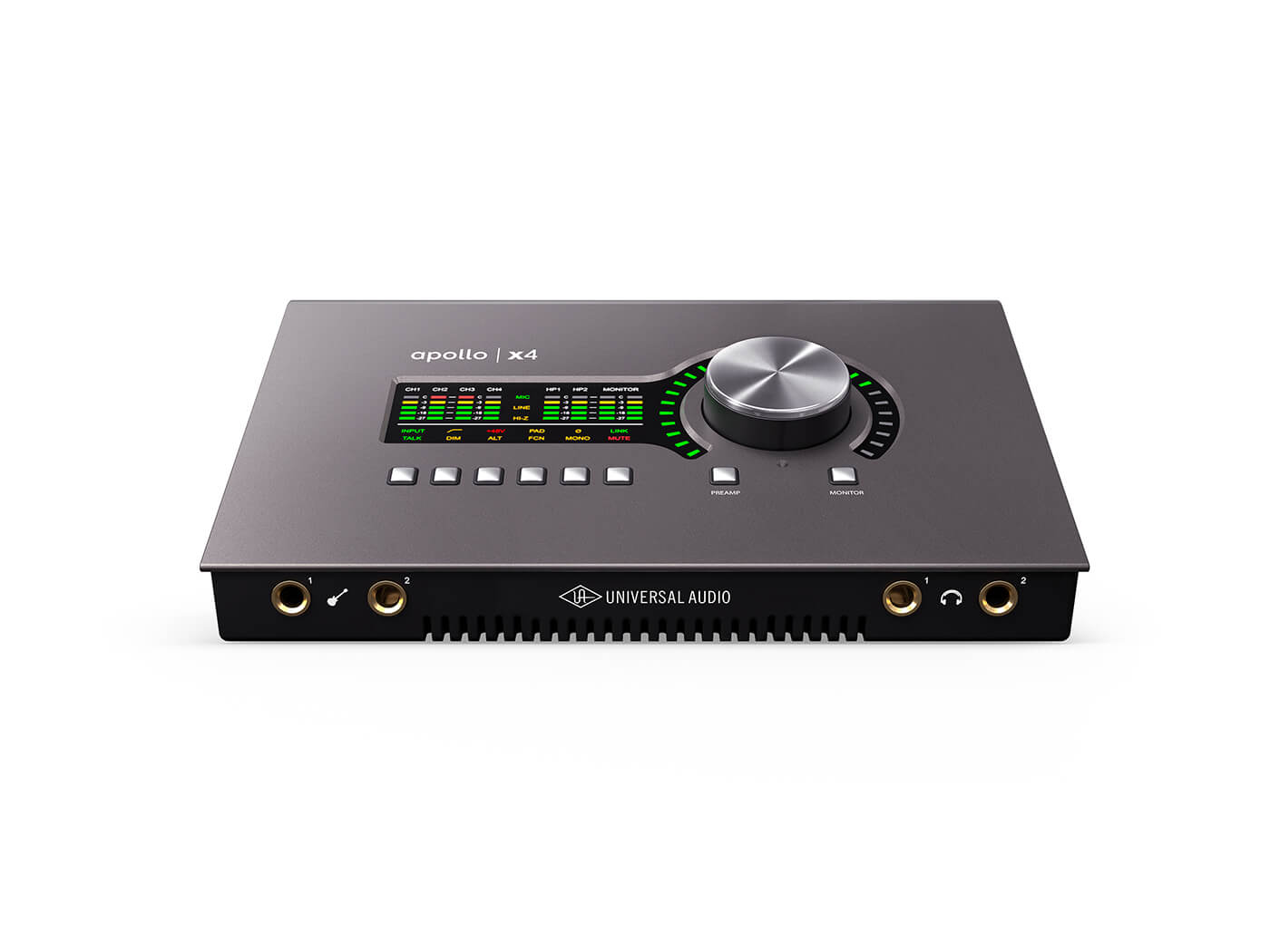 There are a number of audio interfaces that match these criteria very well, but not so many that are also as small, compact and powerful as the Apollo X4. This characteristic makes the X4 ideal for smaller installations and for portable systems, whilst its ability to buddy-up with other Apollo hardware makes it a great way to add more Unison preamps to your system. 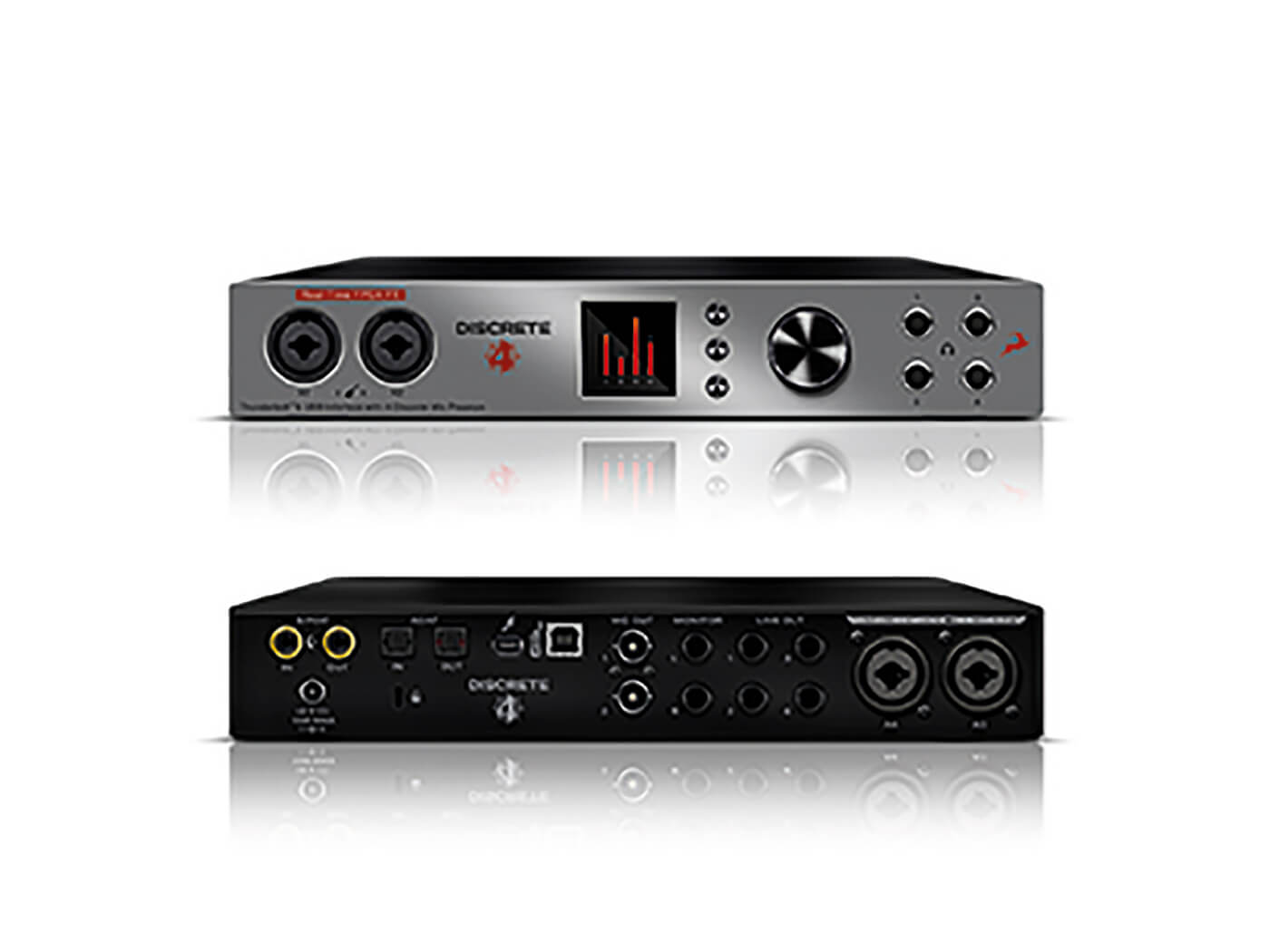 The Antelope Discrete 4’s audio I/O provision is almost identical to the Apollo X4, but it adds a pair of Word Clock outputs, coaxial SPDIF I/O, and the ability to connect to the host via either Thunderbolt 2 or USB 2. The on-board DSP offers a choice of 36 plug-ins. 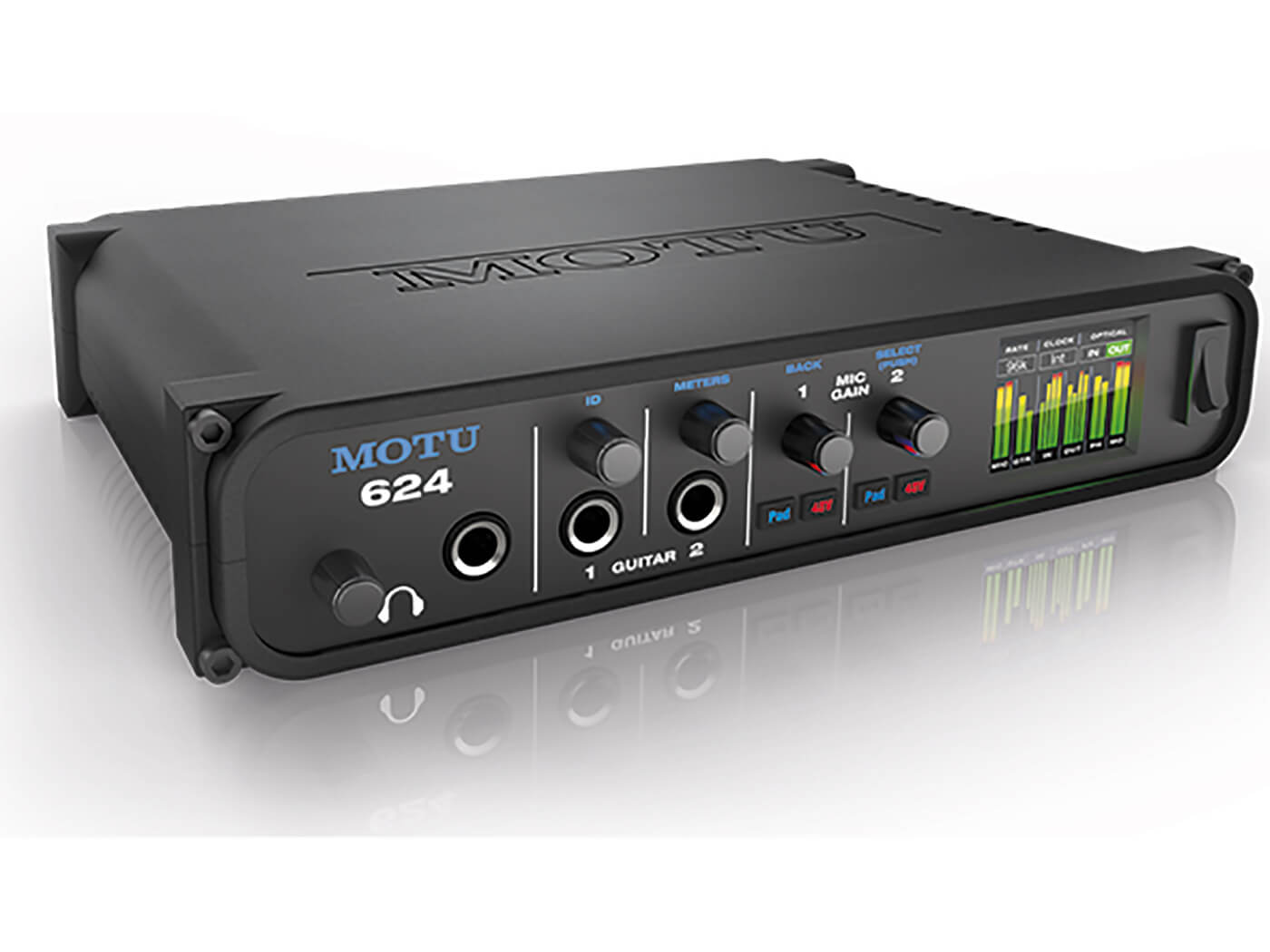 The MOTU 624 is another interface with very similar I/O specs to the Apollo X4, although with only two mic inputs. It connects to the host via Thunderbolt 2 or USB 3, or even by AVB/TSN (multi-channel audio over ethernet). It offers a range of built-in, DSP-supported effects.