SSL’s new controller aims to bring some of their engineering and workflow expertise to the DAW. Can it convince you to let go of your mouse? 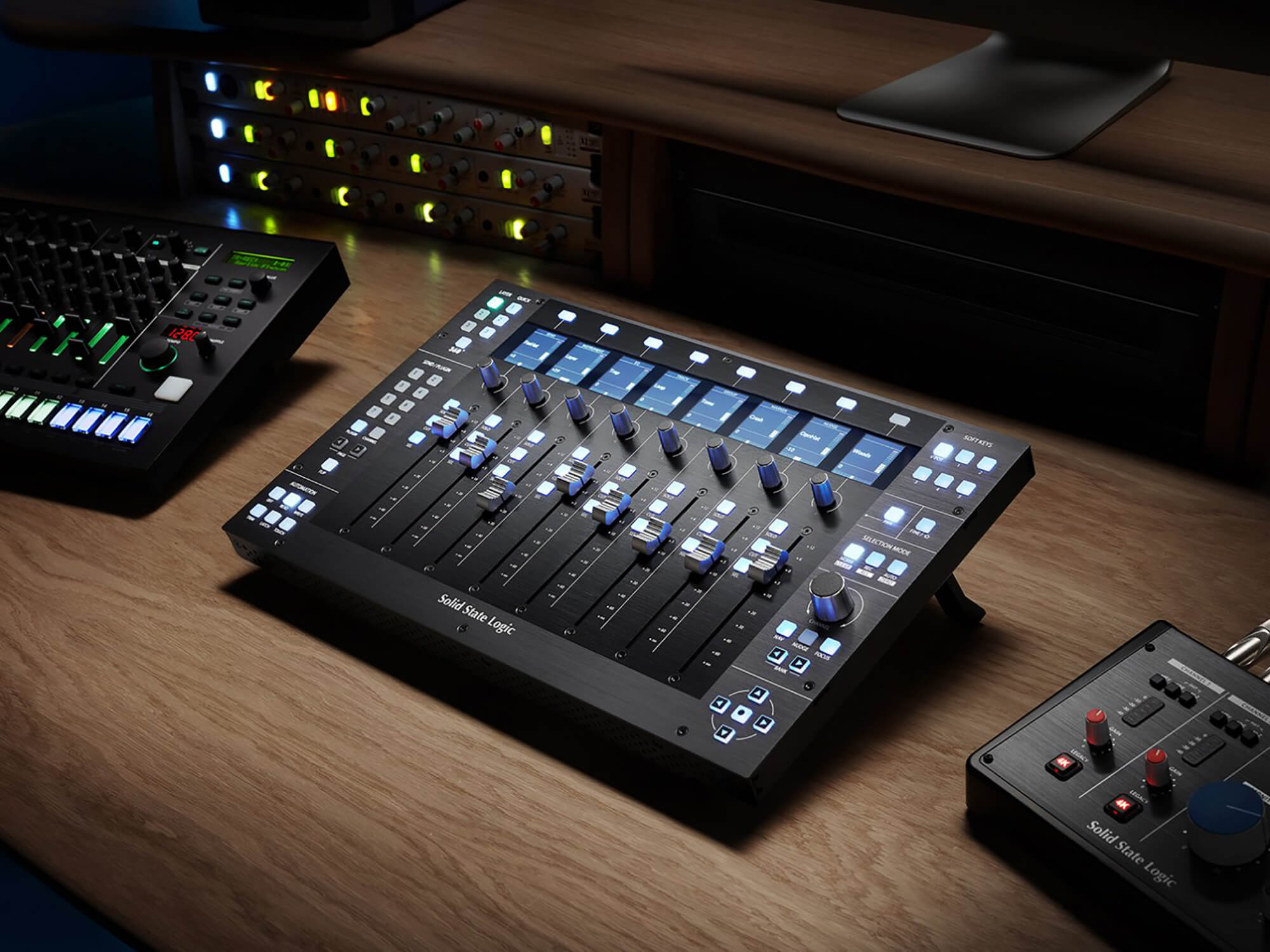 While SSL gained its reputation building large-format mixing consoles, the British pro audio maker has increasingly addressed those taking in-the-box and hybrid mixing approaches in recent years. So, how much of the SSL spirit can their dedicated mixing control surface, the UF8, conjure? And can it serve all major DAWs equally?

The SSL UF8 is intended to be a multi-purpose, DAW-agnostic control surface for working with your favoured production software, with templates for Pro Tools, Logic Pro X, Cubase, Nuendo, Studio One and Ableton Live. 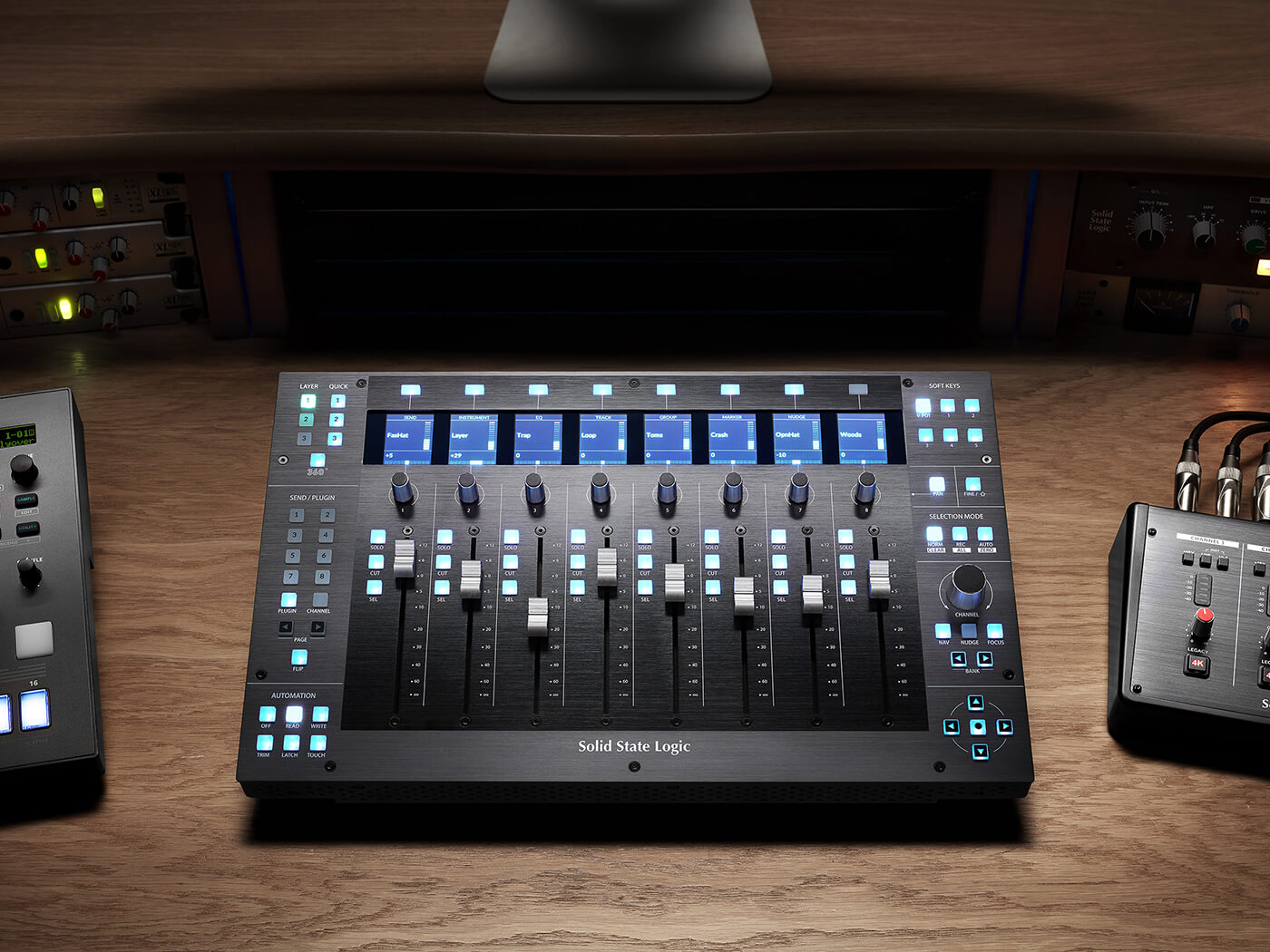 For your money, you get a sturdy slab of metal-encased hardware with eight channels, each populated with a motorised touch-sensitive fader, rotary encoder (V-Pot), solo/cut/selection buttons (plus a soft key) and an attractive hi-res OLED display. The faders are reminiscent of those on the SSL AWS console, with a very light feel, while the knobs have a little more friction (though this varies slightly between channels). Over 40 additional backlit buttons flank the central fader bank and can control an array of DAW functions.

There’s a lot of control once you get your head around the UF8. For example, the large, stepped Channel Encoder on the right has multiple functions. By default, it steps the UF8’s fader bank control up and down your DAWs mixer. It can also control DAW playhead position (Nav mode) and nudge events in Pro Tools (Nudge mode). The most immediately helpful mode, however, is Focus.

Focus mode enables the Channel Encoder’s mouse scroll emulation, allowing you to hover over any plug-in parameter and tweak it, similar to Audient’s Scroll Control feature from the iD range of interfaces. 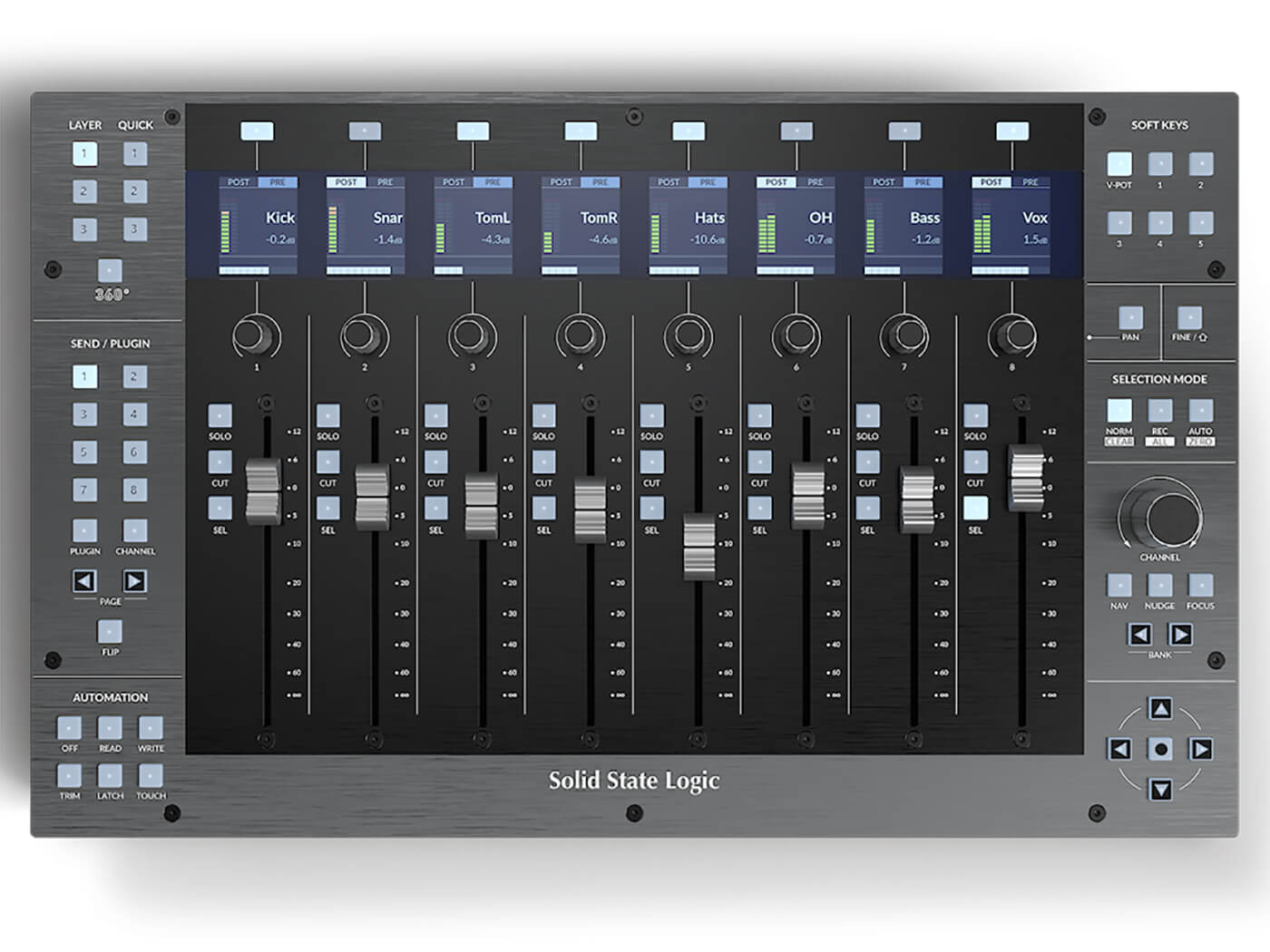 There are no dedicated transport controls. You need to set up the UF8’s soft keys for this if you want to move further away from the keyboard. Some users might see this as a critical omission, but it didn’t bother us much as transport keyboard commands are already burnt into muscle memory. Also, SSL has designed the UF8 so you can use up to four at once, so leaving this as a user-assignable function makes the hardware more expansion-friendly.

The mains-powered controller connects via USB-C. However, to help with compatibility, it operates using MIDI commands. You need to do a little configuration in your DAW to set up integration using the standard HUI/MCU protocol, ensuring maximum compatibility. Because of that MCU integration, the faders operate with 9-bit accuracy for 512 steps of fader resolution – more than enough for the 100mm fader throw. 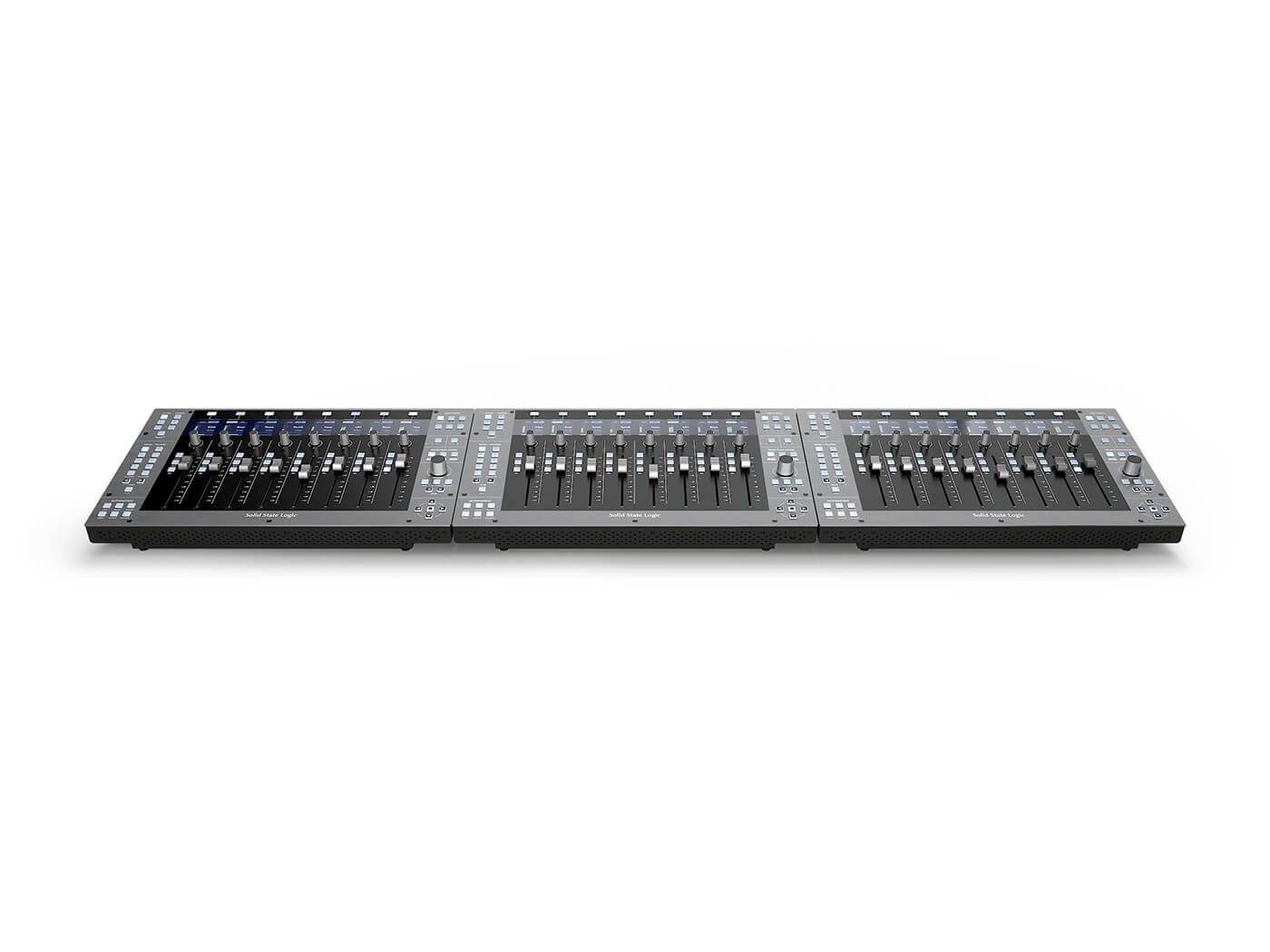 For those not lucky enough to partner the UF8 with a UC1 (review coming soon), a dedicated Layers button permits you to control the SSL 360° plug-in mixer app directly. This software provides a way of viewing native SSL Channel and Buss Compressor plug-ins (if you own them) from one place. It also acts as the front-end for some configuration elements of the UF8. For example, you can set up the software to allow switching between control of three different DAWs at a time or, space-permitting, up to four UF8s.

Given the inherent differences between DAWs, there are some variations in functionality between them when using the controller. It is fair to say that the UF8 was designed with Pro Tools in mind and where its button labels make the most sense. Other DAWs do not use some controls, or repurpose them. For example, the Nudge button and Send/Plugin section when working with Cubase. These are odd omissions because they diminish the functionality and ease of integration with Cubase and other DAWs. However, there is a healthy complement of assignable shortcut keys for each of the major DAWs, though the specific list does differ subtly between each DAW. 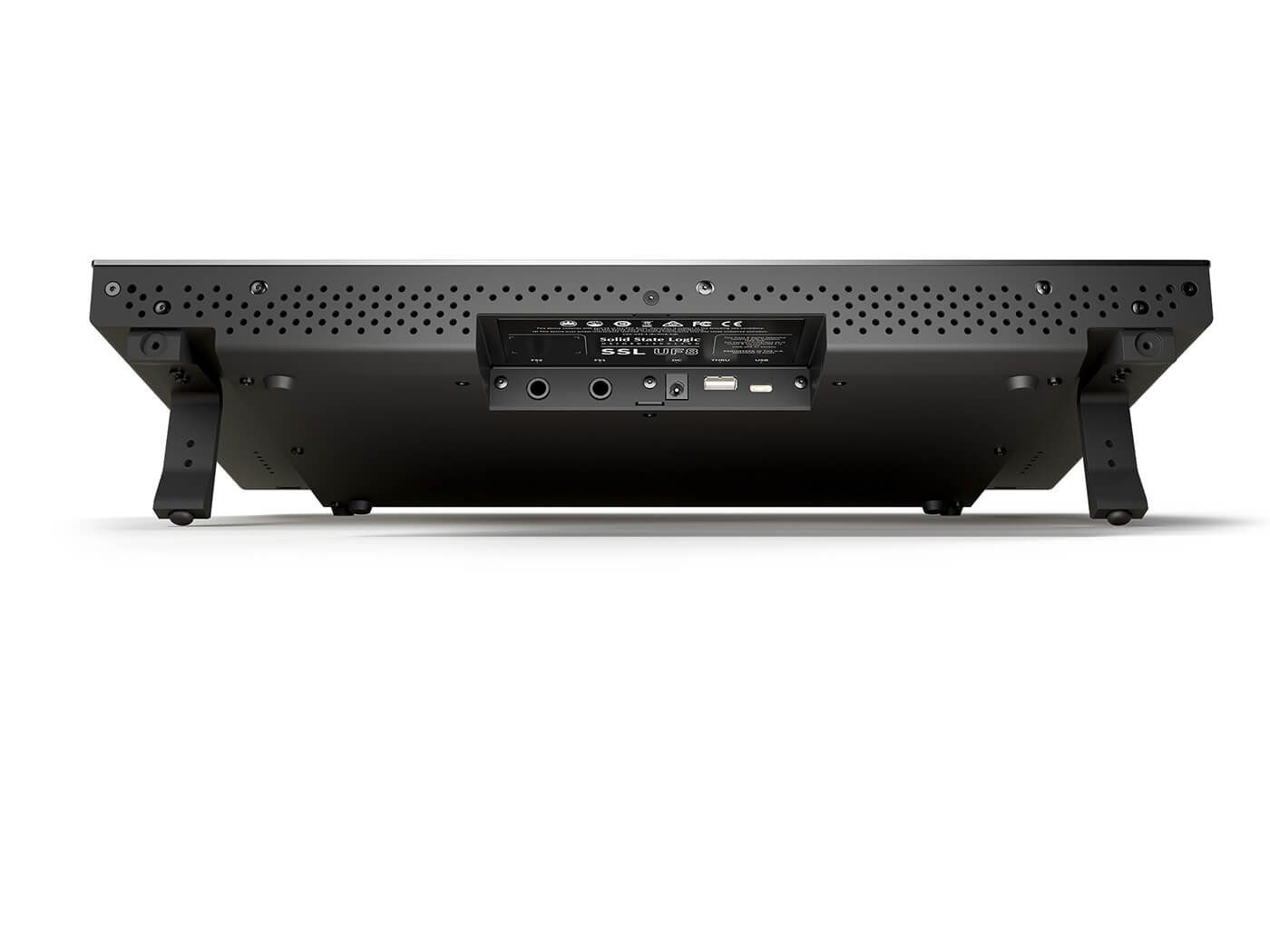 Beyond the basic channel settings and automation mode selection, the UF8 allows you to dive into EQ, send, insert, and even plug-in editing via the eight screens and V-Pot encoders (the multi-purpose pan and parameter controls) and the per-channel soft keys. This is effective, but to get the most from it necessitates some pretty serious re-jigging of your workflow. Even with the eight OLEDs, there is far less visual information (often truncated) when compared to a well-designed plug-in window, and effective control can sometimes involve stepping through multiple pages.

There are many options available across the price spectrum for those wanting a more tactile approach to mixing in-the-box, including those from Avid, Mackie, Softube and Behringer. For those on a budget, the Behringer X-Touch is a third the price of the UF8 but lacks the SSL’s solid professional feel and potential longevity. As ever, you get what you pay for.

In short, the UF8 satisfies its remit well, but if you’re used to mixing with a mouse, the re-learning involved might take some time, particularly when employing multiple plug-ins in complex mixing scenarios.