As two industry titans again collaborate on an in-the-box studio, we ask whether producers/engineers will be bending over backwards to get their hands on it. 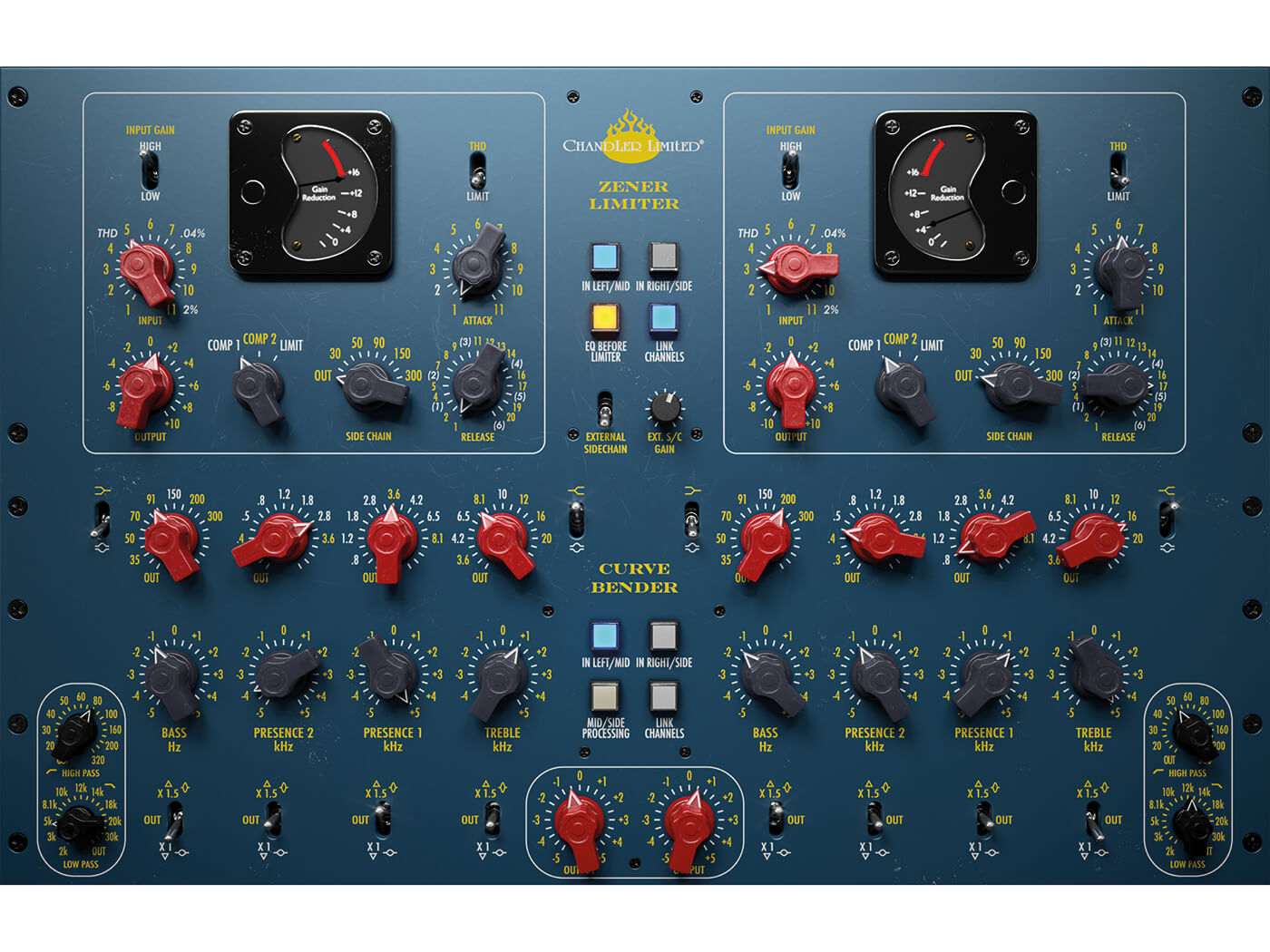 Thanks to its close association with Abbey Road Studios, Chandler Limited is a name that’s always had a particular resonance within the pro audio community. The seminal sound and character of early rock ’n’ roll recordings were shaped by the enviable richness and punch of Chandler designs, and knowledge of that pedigree has endured.

Over the past decade, Chandler Limited and Softube have become keen collaborators, offering emulations of the Germanium Compressor and individual versions of the combined plug-in reviewed here. Both the Zener Limiter dynamics processor and the Curve Bender EQ have been available for some time (both natively and on the UAD platform) but, until now, the two have never been combined into a single channel strip.

The Zener-Bender fuses these two classic designs into a single interface. By Softube’s own admission, the idea behind this plug-in was to act as an output channel strip processor for mixing and mastering engineers. They probably didn’t expect that it would prove so useful on grouped and individual sounds throughout the mix stage. 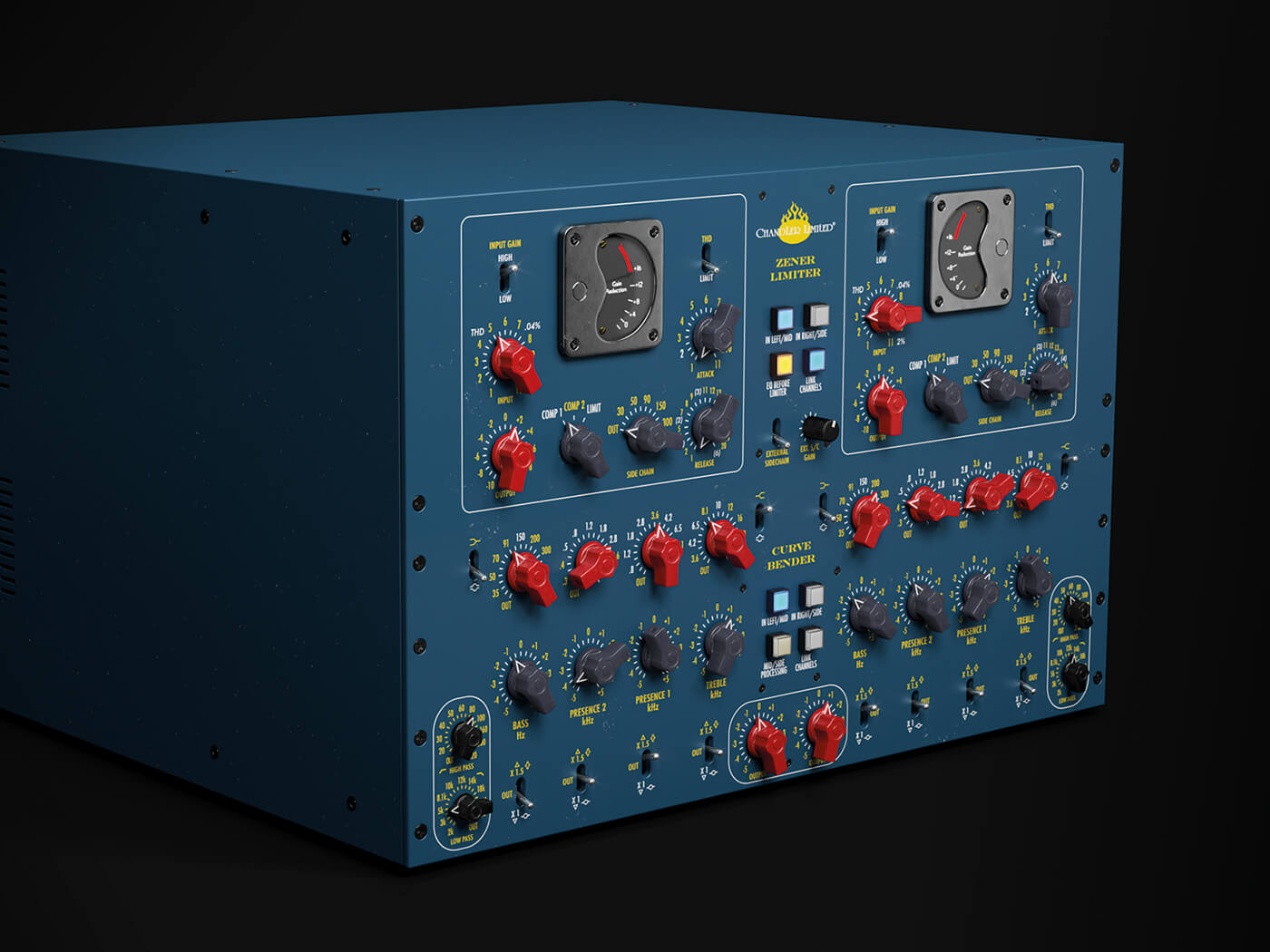 The upper section dedicates itself to the capabilities of the Zener Limiter, in all of its sumptuously fat, rich and punchy glory. Channels are linked by default, so switching settings for the left channel will affect the right, unless you’re working on mid/side applications, in which case these are handled as substitutes for the left/right parameters. Input gain can be controlled by a rocker switch, which toggles between emulation of the gain input stage of the RS168 (high gain) and the TG12413 limiters (low gain), giving you different gain settings and sonic characters.

The input area allows you to dial in not just extra gain but also the smooth, warm saturation that comes from the THD (Total Harmonic Distortion) circuit. There are three modes for dynamic range control. Comp 1 offers a smooth meant-for-mastering compression setting of 2:1, with slower response times, in keeping with the famous RS124 compressors at Abbey Road. This setting produces more subtle, musical and potentially transparent dynamic control.

At the other extreme, the Limit setting emulates the performance of the Fairchild 660 compressor, with a quicker response and a more aggressive feel. The intermediate setting Comp 2 offers a halfway house between these sonic worlds. These compression settings bring their own attack/release response but dedicated dials allow you to tailor the dynamics to your tastes.

Crucially, the central section of the Zener-Bender, found between the left/mid and right/side parameter sets, features an external sidechain option, which lets you control dynamic response from an external signal. This is unique to this plug-in and isn’t present within Softube’s standalone Zener Limiter. The central section also provides the option to instantiate dynamics control before or after the tone section of the Curve Bender, letting you decide whether to shape tone to a compressed signal or vice versa. 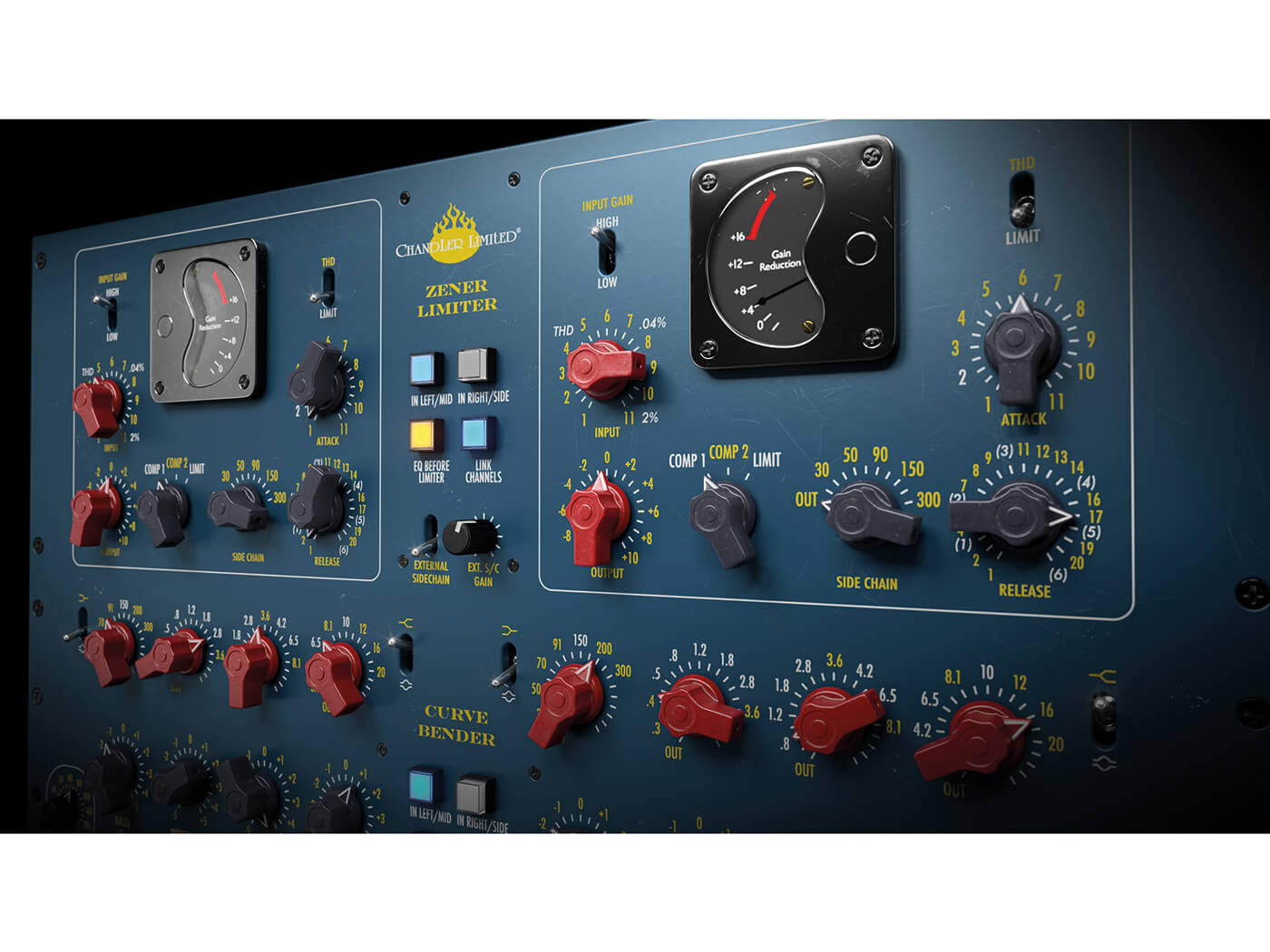 The lower section of the plug-in is dedicated to tone shaping, via the relatively self-explanatory layout of the Curve Bender EQ. The bottom left- and right-hand corners offer high- and low-pass filters for the two channels, while primary EQ controls are provided via the rotaries above. There are bass, treble and two intermediate mid-range presence bands, with an off setting on the left of the frequency dials for if you want to bypass a band altogether.

Otherwise, up to 5dB of cut/boost can be applied per band by default, with the bass and treble dials offering switchable bell or shelf shapes. If you set the multiply setting below each band to the upper position of X1.5, the cut/boost can be increased to up to 15dB in either direction, with a narrower bandwidth also used to tackle more surgical tasks. The upper band shines with air and sheen, and the mid-range bands sound wonderful, whether you’re looking to address a specific problem or carry out more precise tone-shaping while mixing or mastering.

What’s in a sound?

EQ and compression are without question the two most commonly used processes throughout the tracking, mixing and mastering stages of recorded music. But whereas some plug-ins tackle these tasks by providing a neutral tone to let you cut, boost and flatten in as transparent a manner as possible, others dare to impose the tone and colour of their components onto your music, confident that they can improve it, harmonically and dynamically.

Chandler Limited’s hardware has such a proud history – particularly via its associations with Abbey Road and the pioneering technology developed for that studio during the seminal days of The Beatles and early rock ’n’ roll – that you don’t need us to tell you that the Zener-Bender falls into the latter category. However, what might be less obvious is that the richness of this plug-in has many benefits beyond specific musical genres.

For a plug-in that looks primed to sit on your output channel and act as a one-stop shop for mastering or bus processing, it’s worth pointing out that some of the best and most exciting results we got from Zener-Bender were on individual instruments, including lead vocals. We agree with Softube’s assertion that it has, deliberately or otherwise, built a processor whose capabilities stretch beyond mastering alone.

The Limit setting can smash drums to pieces in a Fairchild-esque way, with all the sumptuous extra power you’d expect. It’s a treat if you enjoy employing New York-style parallel compression to drums. This is a brilliant processor for bringing out the sounds and ambiences of a room too. If you’ve recorded a string ensemble, solo guitar or dance or pop vocals in a physical space with a pleasing background sound, Zener-Bender will be able to lift that up in the mix. Speaking of vocals, we didn’t expect to find ourselves reaching for the Zener-Bender with a vocal channel in mind.

The careful and timbrally rich EQ, the three dynamics options, and the opportunity to increase the harmonic footprint of a vocal using the THD stages, however, add up to a thoroughly gorgeous, thick, rich tone that can command any mix. If you favour more extreme vocal settings too, you’ll be pleased to hear that using this plug-in as a parallel vocal channel works wonders also.

Purchasing the Zener-Bender effectively nets you a plug-in bundle that includes the individual Zener Limiter and Curve Bender plug-ins too. So if the application you’re working on requires only EQ or compression but not both, you’ll be well placed to neatly tackle the issues. For Console-1 owners, a compatible version of the Zener-Bender completes the plug-in bundle line-up. Softube’s relationship with Chandler Limited continues to go from strength to strength. Given that Chandler hardware requires extraordinarily deep pockets, the likes of which most of us don’t have, it’s thrilling to have this level of sound quality in plug-in form. 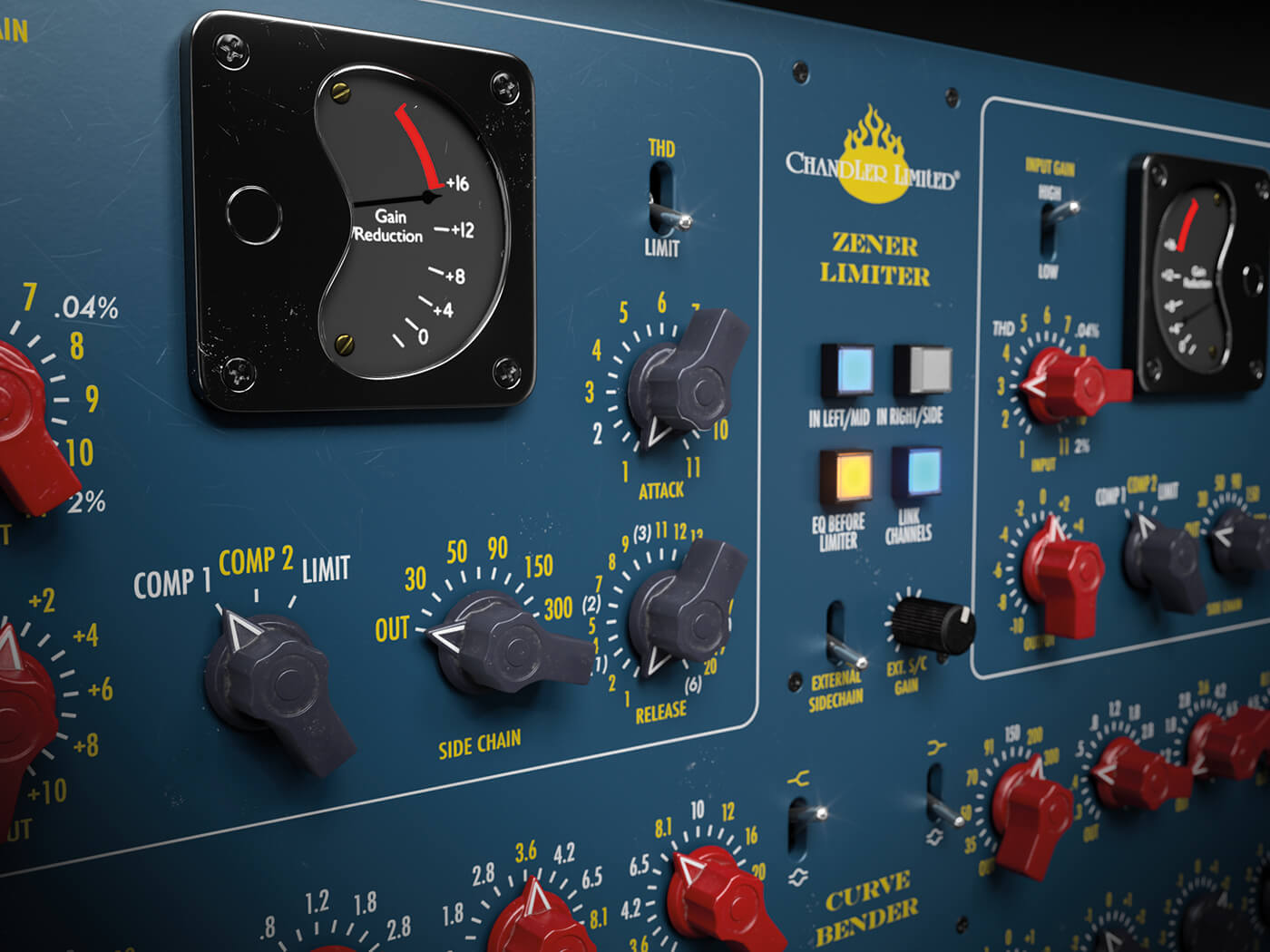 The Zener-Bender is more flexible than it looks. It was designed as a mix bus processor but quickly outperformed its remit, making it far more of a workhorse throughout the mixing process than you might initially expect.

Capable of everything from subtle output-channel lifting to far more aggressive forms of timbral and dynamics shaping, there’s an awful lot to like about this plug-in. At the price, several EQ/Compression combinations are available, so the Zener-Bender will appeal most to those drawn to the rich sonics associated with the Chandler Limited name. 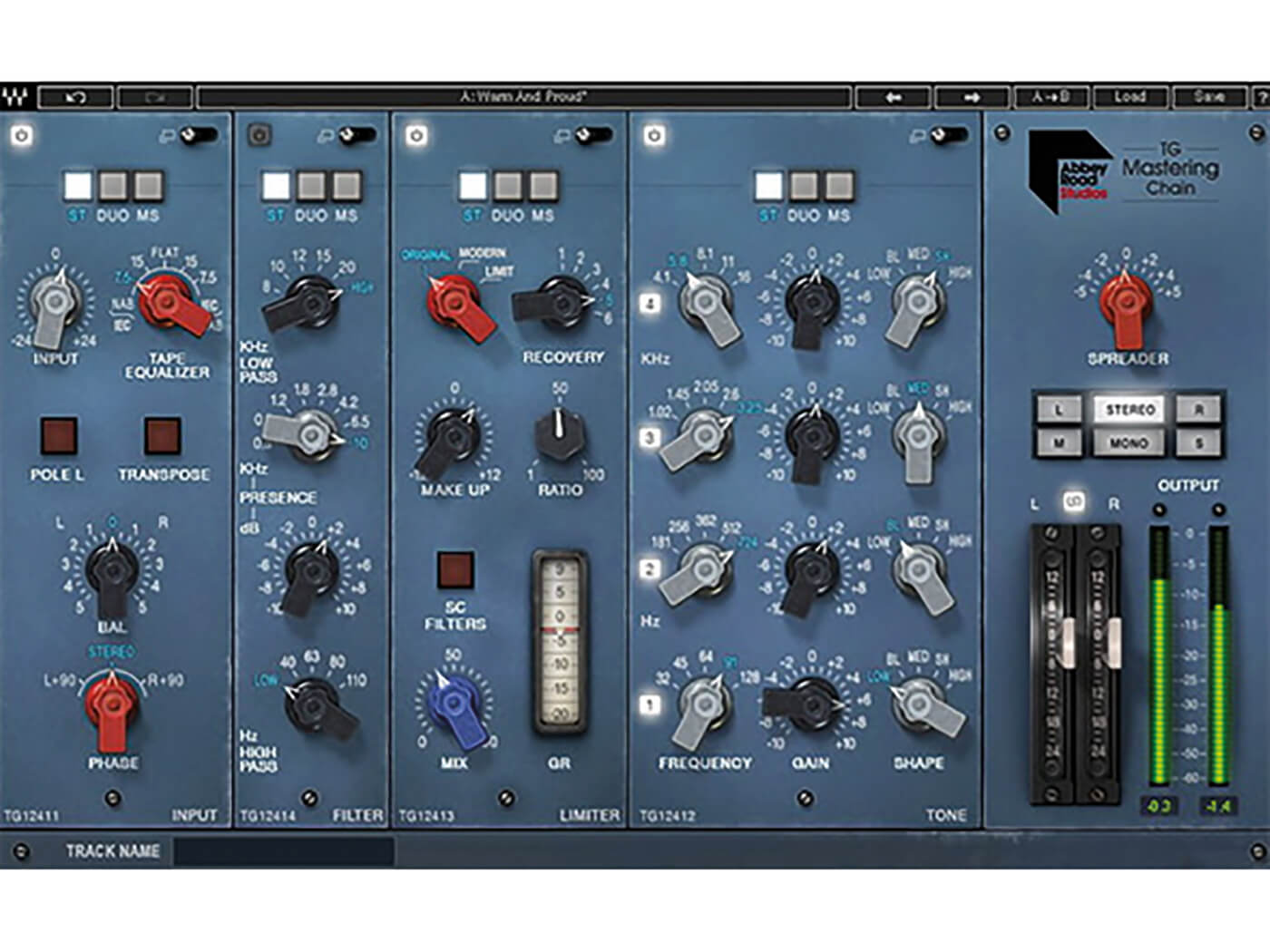 The Abbey Road TG mastering consoles have a decades-long resume to prove their worth. If it’s the mastering angle that draws you to the Zener-Bender, it’s worth comparing it with this modular plug-in before committing to a decision. 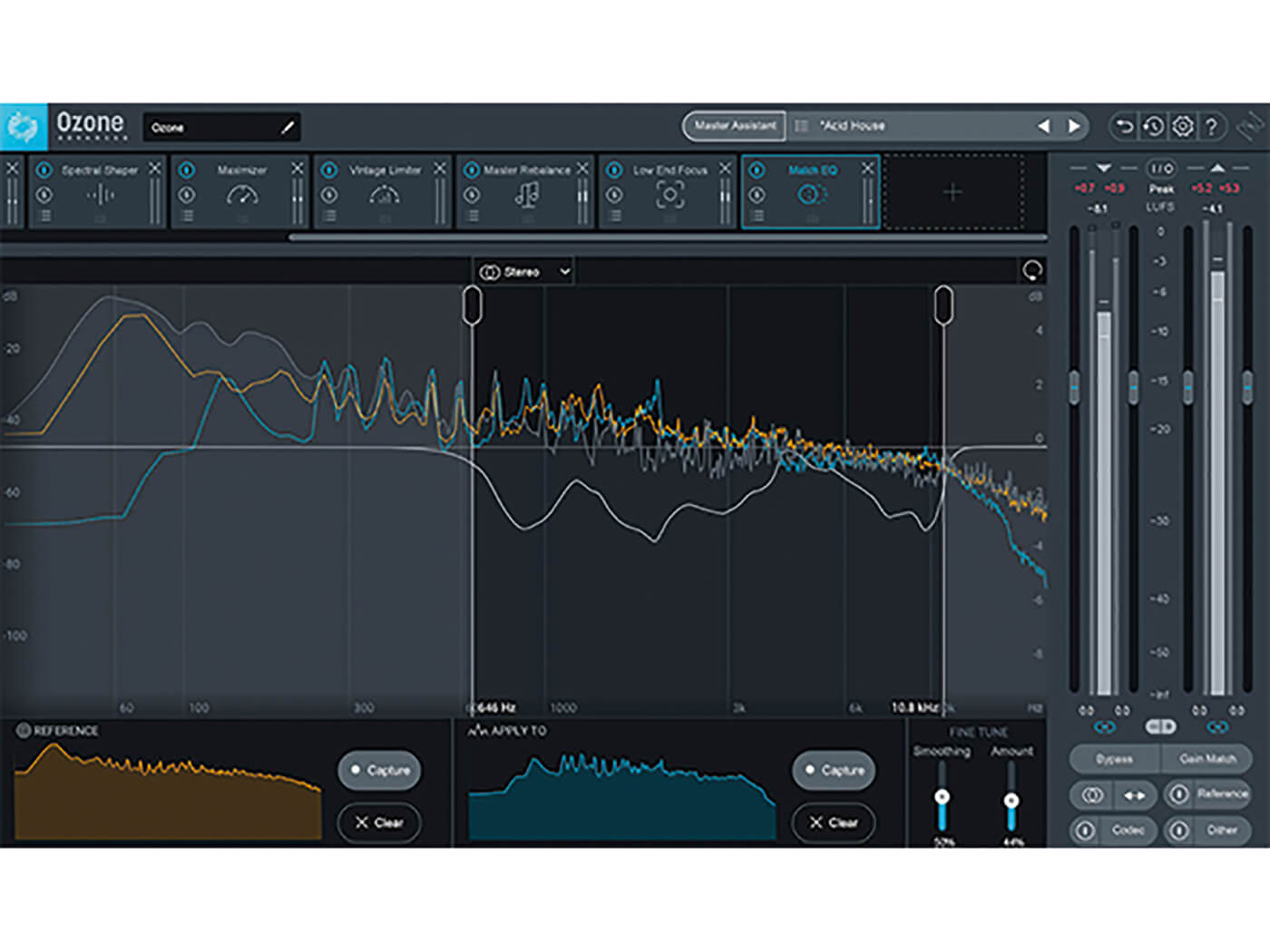 In its earliest versions, Ozone was laughed at for the simplicity it sought to bring to two-bus processing. But with each iteration, its reputation has grown. Today, it’s popular with many mastering studios, even if it doesn’t boast the hardware tradition of Chandler Limited.