A global converter shortage forced Focusrite to overhaul its respected Clarett line, and based on the Clarett+ 2Pre, the brand has more than risen to the challenge. 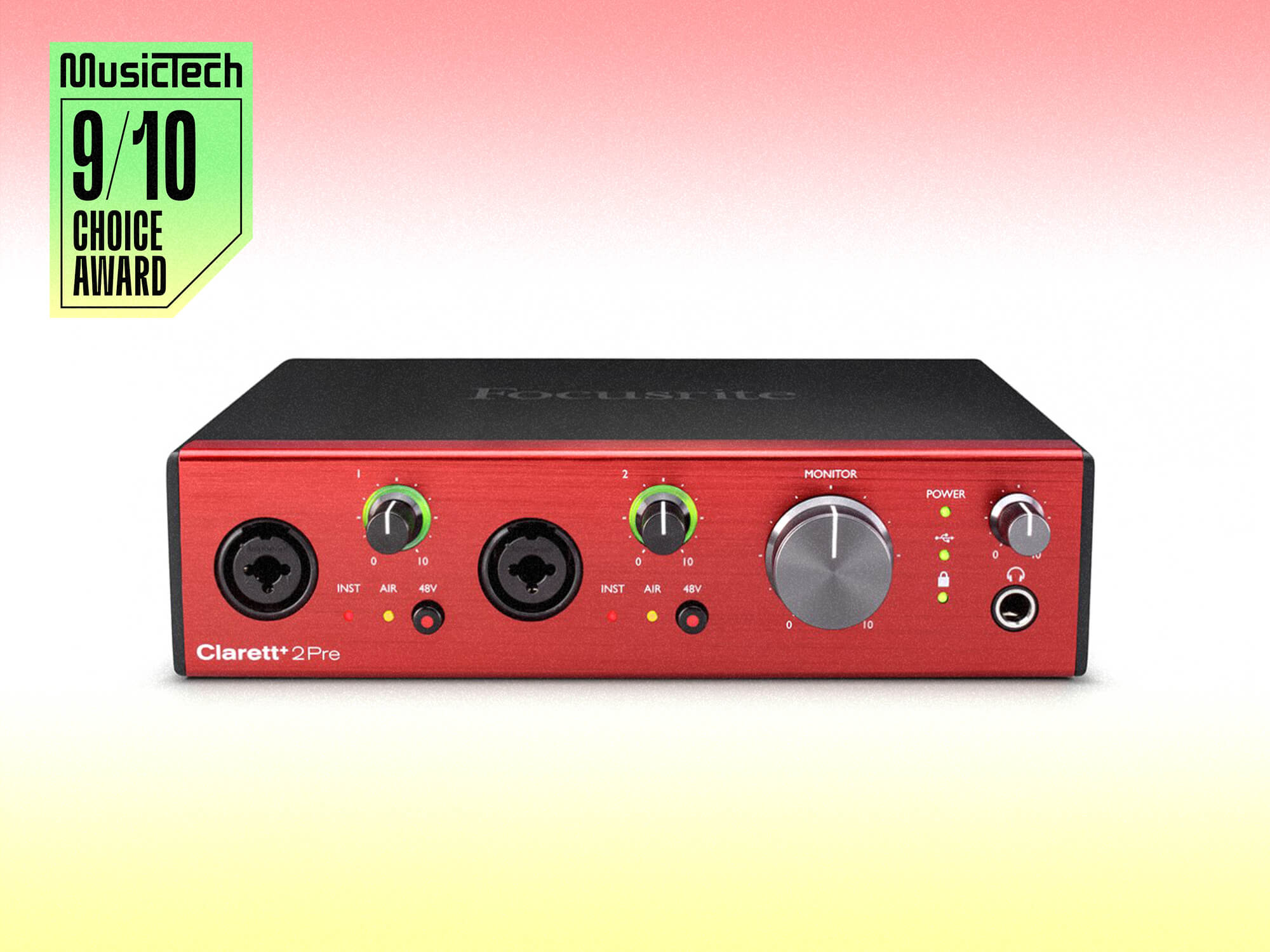 It was nearly a year ago, in October 2020, that a huge fire ripped through the manufacturing plant of AKM, one of the world’s leading suppliers of AD and DA converters. Thankfully nobody was hurt, but the loss of supply of such a fundamental component hit many digital audio hardware manufacturers hard.

Focusrite was badly affected; its highly regarded and ever-popular Clarett audio interfaces were designed around AKM converters. But, despite those parts being unavailable, switching to different converters was impossible due to differences in performance that would impact the sound. So, turning disaster into opportunity, they entirely redesigned the Clarett circuitry around new converters. It was a potentially risky strategy given how perfectly the original blended price, performance and sound, and how well-loved that sound is among owners. However, we’ve had our hands (and ears) on one of the new interfaces for a few weeks now, and it seems that the risk has paid off.

Externally, the new Clarett+ units are virtually unchanged from the previous incarnation, which means solid, well-built metal enclosures with vibrant, claret red, brushed aluminium fascias. There are subtle differences in the decals, and the rotary controls now all share the same smoky-grey brushed aluminium finish. It’s very tasteful and pleasing to the eye. Functionally, those rotaries have a lovely solid feel and perfect turning resistance. 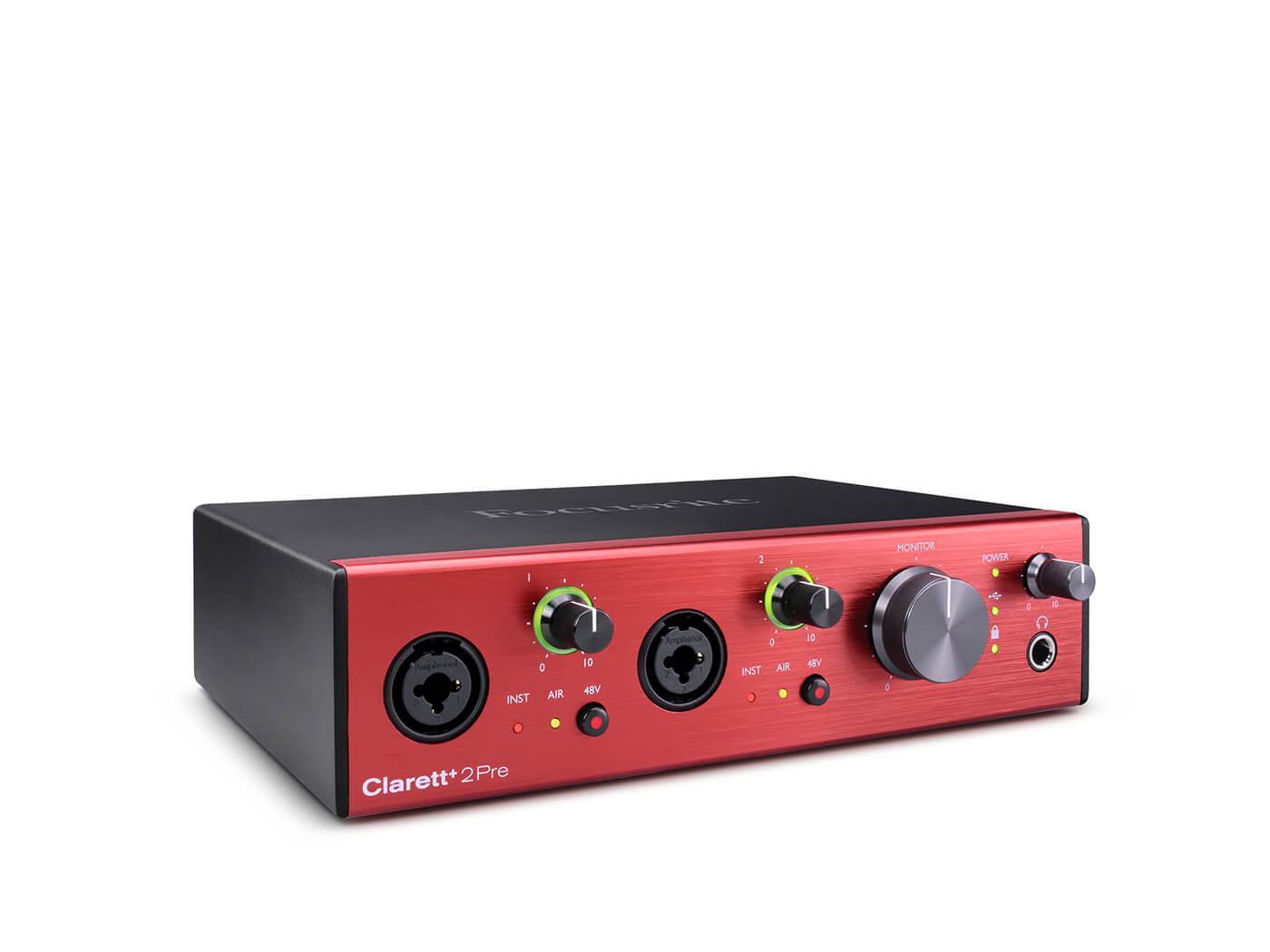 The I/O configurations are familiar too: the 8Pre has eight analogue input channels, with mic preamps on every input, and ten analogue outs; the 4Pre has eight ins, four of which sport mic preamps, and four outs; and last but not least, the 2Pre, tested here, has a pair of mic-pre-equipped inputs and four analogue outputs. All three interfaces also feature standard headphone jacks with independent volume controls – two for 8Pre and 4Pre, and just the one for 2Pre.

The 2Pre’s pair of analogue inputs have XLR/jack combo connectors and are front-mounted for easy access (the other models also have a pair of front-mounted inputs, with the remainder on the rear). The mic preamps are essentially the same as those in the previous Clarett, with high headroom, low distortion and very low noise. The 2Pre gets a tiny boost here with smidgen more dynamic range than its predecessor, delivering 119dB of range instead of 118dB. However, the other Clarett+ models retain the original 118dB input dynamic range.

The preamps feature Focusrite’s all-analogue Air circuitry, which mimics the sound of the company’s classic ISA 110 console preamp. It does this with an impedance switch to 2.2kΩ for the mic input, and an added pair of high shelving boosts that colour and shape the high frequencies. This works very well on vocals, bringing out the breathiness and adding a certain crispness to the upper registers. It is also very effective on both acoustic and electric guitars, whether mic’d or DI’d. When connecting instrument signals, the preamp inputs can be switched (along with a satisfying relay click) to an ultra-high impedance JFET circuit, much as you’d find in the input stage of some guitar amps. 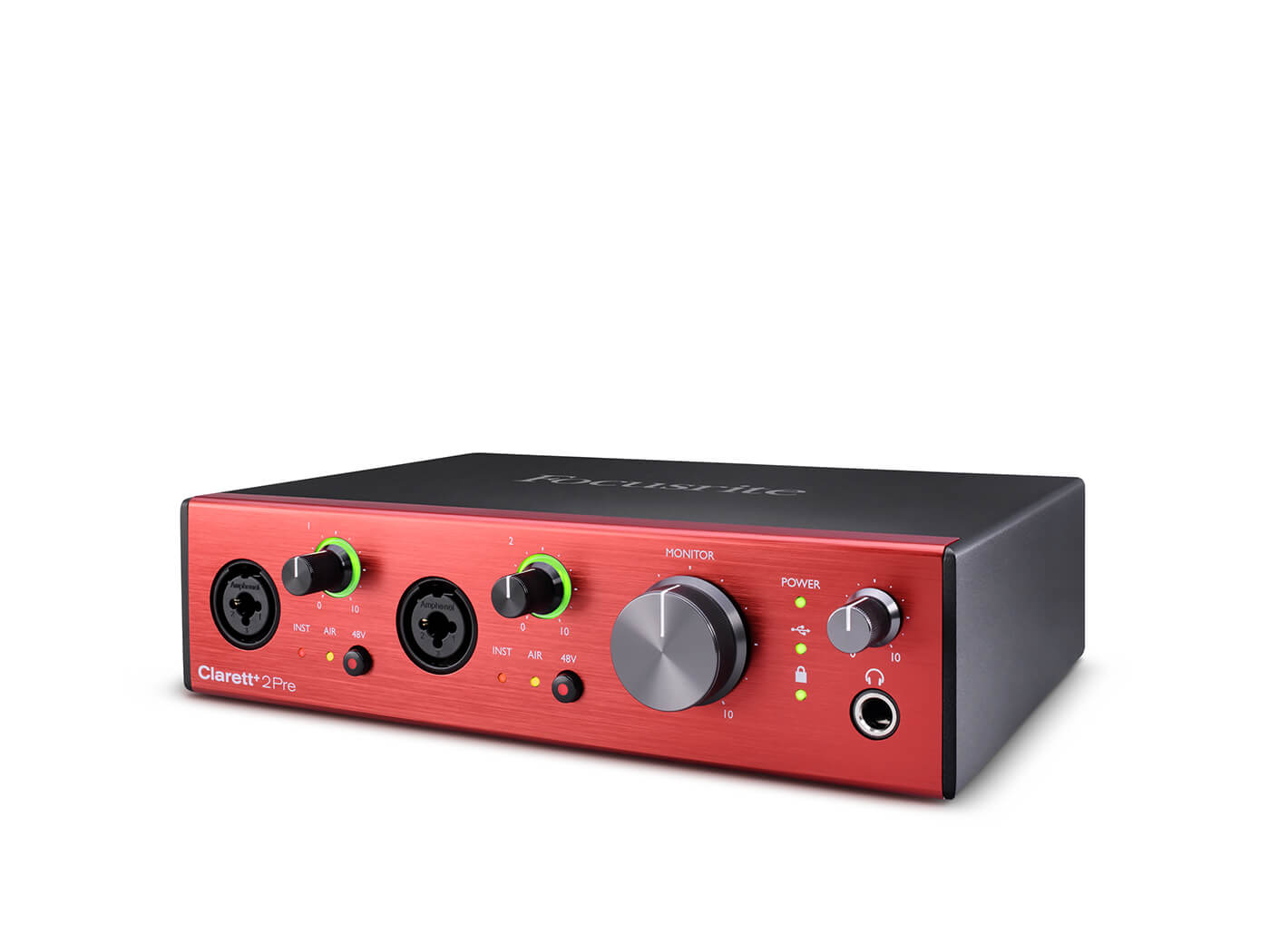 The 2Pre has a single ADAT optical input for digital connections, allowing eight extra input channels (the 4Pre and 8Pre add coaxial S/PDIF I/O, while the 8Pre also has an ADAT optical output). This earns the Clarett+ billing as a 10-input interface, permitting band recordings with the appropriate ADAT expander. The MIDI I/O ports, which are always useful no matter how long-in-the-tooth the technology is, are carried over from the original Clarett, too. These two inclusions significantly increase the expansion potential of the Clarett+.

The new Cirrus Logic converters used in Clarett+ have allowed Focusrite to up the performance specs quite significantly. Line output dynamic range is increased by an impressive 6dB to 124dB, with a smaller but still welcome 3dB improvement on the headphone outputs, which now sport 118dB of range. THD (total harmonic distortion) is improved too, down from -107dB to -110dB at the input stage, with a similar 3dB drop on both line and headphone outs.

Focusrite has improved specs that were already good, so they may not stand out particularly if you were to perform direct A/B comparisons with the original hardware. This is intentional, though; Focusrite has taken great care to retain the character of the Clarett sound. The improved specs mean that signals are sampled and reproduced a little bit more accurately, which brings benefits that accumulate as you add parts and processors and your song or mix becomes more complex. 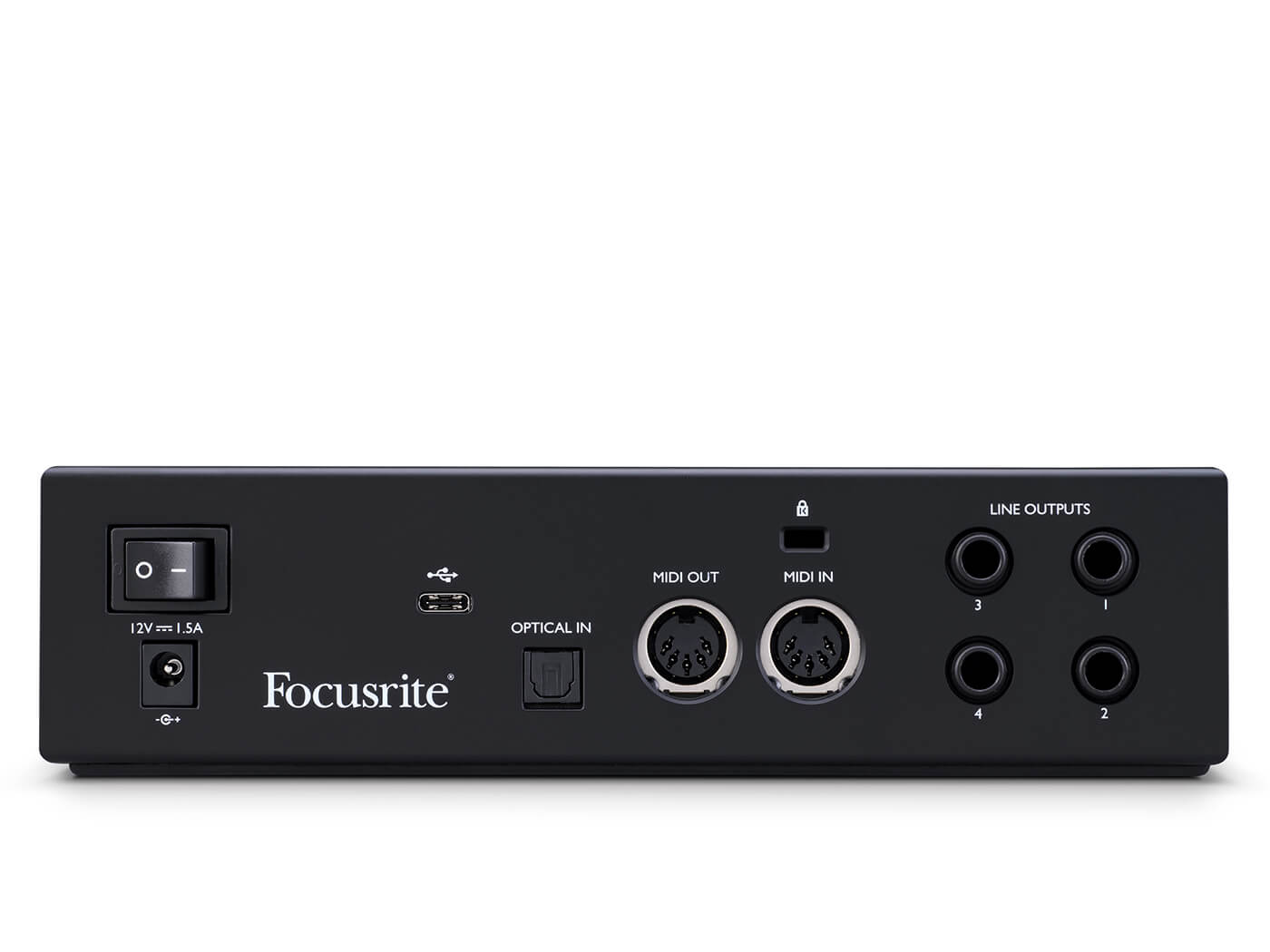 On the software front, Clarett+’s installation package is refreshingly lightweight and quick to get up and running. Alongside the requisite drivers, the Focusrite Control software provides access to all of the hardware’s settings. This has a minimalist look but is very easy to navigate and operate.

Our only complaint about Focusrite Control is that the buttons used to set the jack input signal type (line or instrument) and to enable the Air feature live on a separate page to the faders and routing controls. It seems there would be ample room for everything to share the same page.

Focusrite has bundled a small but tasty plug-in collection too. Red 2 EQ and Red 3 Compressor are modelled on the legendary hardware of the same name, and these plug-in versions have been around for a long time now. They are no less valuable because of their age; they have been steadily improved over the years, giving an authentic analogue-like sound with minimal processor hit. 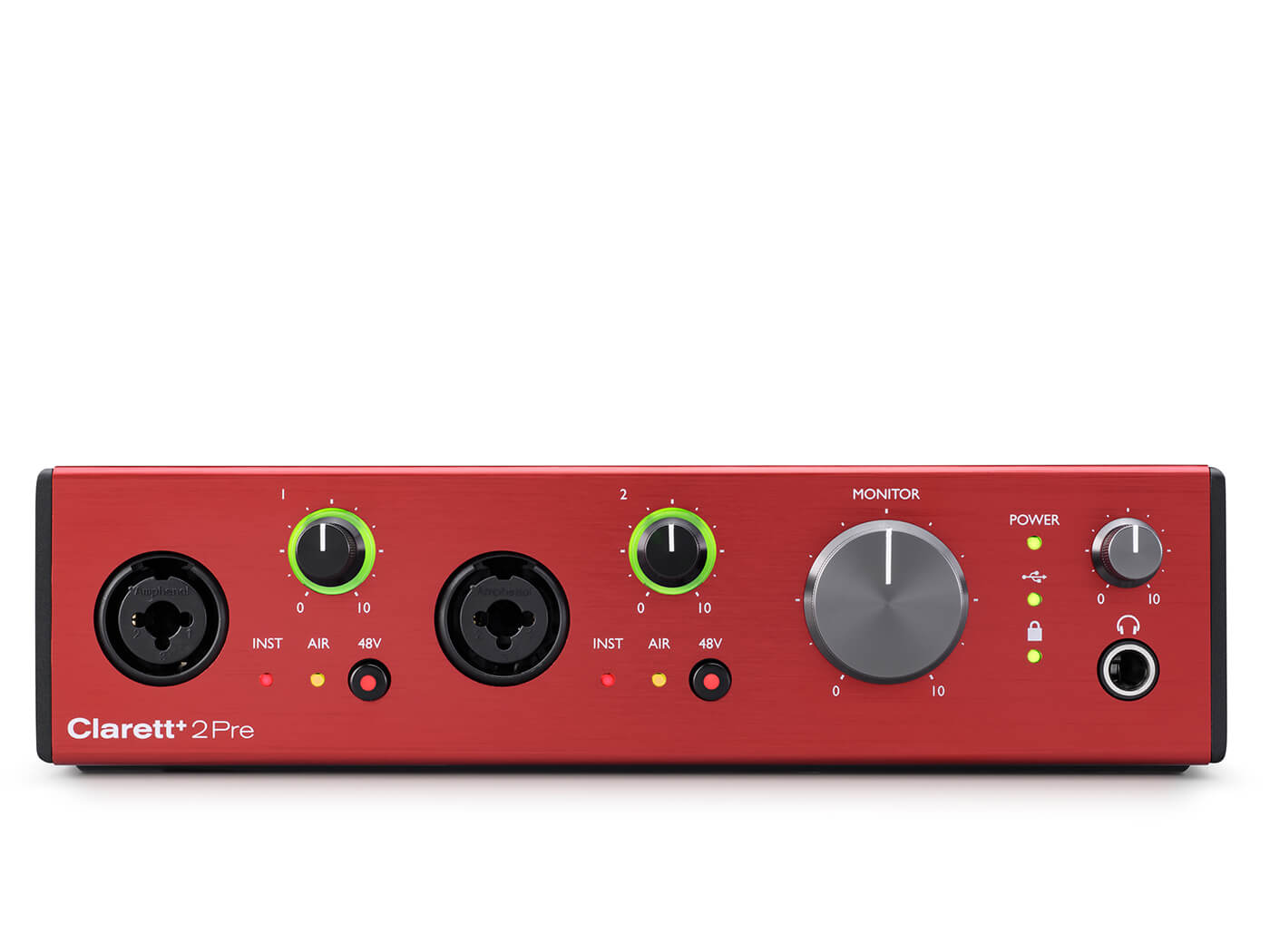 Also included is Brainworx’ bx_console Focusrite SC, a faithful and fully endorsed recreation of a channel strip from the peerless Focusrite Studio Console mixer. The model includes both the ISA 110 EQ and ISA 130 dynamics modules, and features Brainworx’ advanced Tolerance Modelling Technology, which models and recreates subtle differences in the individual circuit components of the channel strip. Usually selling at $349 (around £250/€295), this plug-in alone adds a lot of value to the Clarett+ 2Pre bundle.

If you are the proud owner of a first-gen Clarett, then there’s unlikely enough here to tempt you to crossgrade to a Clarett+ of the same I/O specification, although the improved specs may persuade you the time is right to upgrade to a unit with increased I/O. Alternatively, if you’re simply in the market for a mid-priced, high quality, great-sounding, well built and downright handsome audio interface, then you’ll find few that fit the bill as well as the Clarett+.