Who said small studio monitors were no good? Certainly not IK Multimedia – and its new iLoud MTMs look set to continue the compact- speaker revolution. 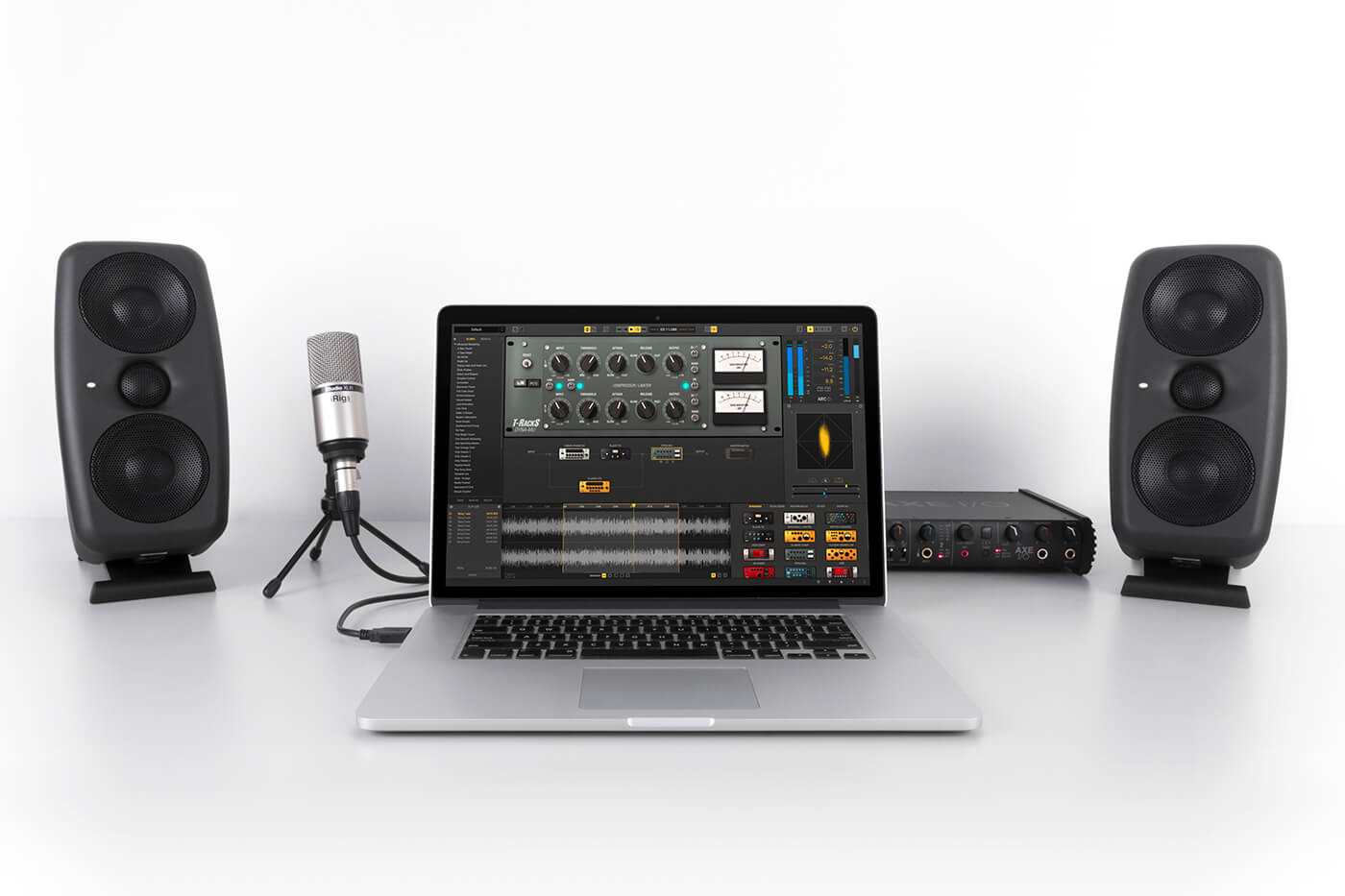 Regular MusicTech readers might well have noticed a shift in our stance on small and cheap monitors over recent issues. We used to say that you needed to spend well into four figures for ‘proper’ studio monitors, but speaker transducer and circuit developments, tied with improved designs, have meant that you can now get decent, small and cheap monitors for around £500. Our advice therefore, has had to change with the times.

Our recent reviews of monitors from the likes of Adam Audio and JBL have shown just how good small and cheap speakers can be. But even before these releases, IK Multimedia had snuck in there with ridiculously small monitors and made a splash with them.

The company’s iLoud Micro monitors were announced at NAMM 2017 as ‘the smallest studio monitors in the world’. I wanted to challenge that claim in my review, but was convinced by them – they did/do a great job and went on to win praise across the board. There’s a lot riding on these new iLoud MTMs, then and a lot more competition out there in the hotly contested small-speaker sector.

First up, these are neither as small or as cheap as the JBLs One Series 104s and iLoud Micros, but their price is still pretty keen for studio monitors. You also get a lot in a very compact package including the wonders of digital self-calibration, where the monitors measure your room and adjust themselves to give you the best response for mixing – once just the domain of expensive monitors from the likes of Genelec.

The iLoud MTMs are, according to IK, designed to deliver the same kind of pro results that you’d find from much larger speakers, so are packed full of clever design tweaks and tech. They are very compact – only a couple of inches taller than the desktop JBLs I mentioned above – but unlike those, offer the ability to place these upright or on their sides (with an attachable a rubber base) and to tilt them on your desktop up to 20 degrees (with a cool and easy to use tilting stand). 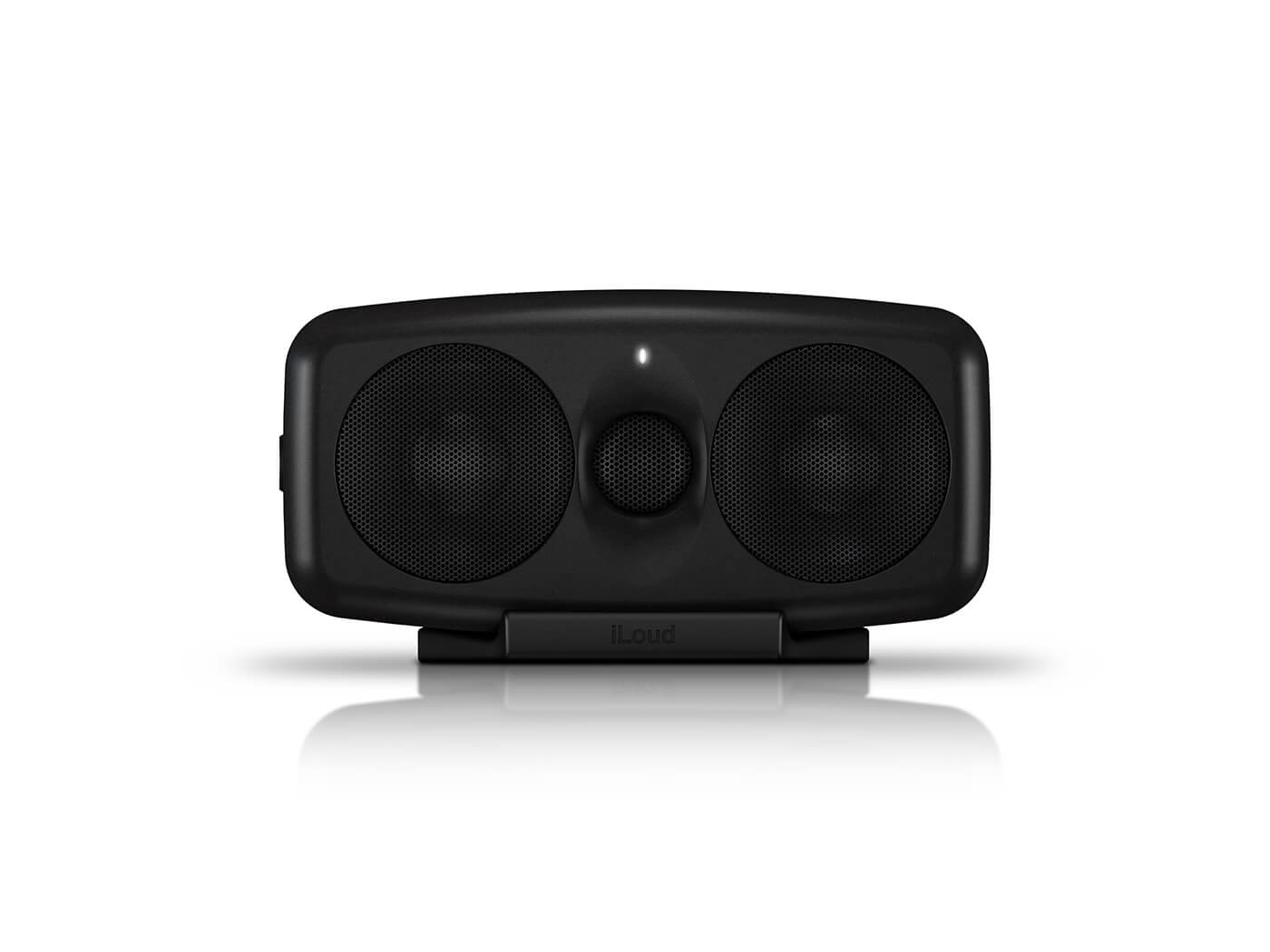 The speakers look like three-way monitors, but actually boast a two-way/three speaker setup, so you’re looking at two mid woofers and a tweeter in each speaker. This design is produced to deliver point-source sound, which minimises ear fatigue as the frequencies of the drivers arrive at the same time. Other companies – again, like Genelec and also Pioneer – use coaxial designs to deliver point-source sound where the tweeter is positioned in the centre of the woofer. Here, the midrange woofers are positioned on either side of the tweeter to attempt to deliver a similar design and effect.

The woofers are called mid-woofers, so you’d think they might not extend low enough for your bass needs. However, they are actually designed with a bass extension down to 40Hz and utilise IK’s Physical Response Linearization (PRL) system for a ‘balanced and defined low end’.

The IKM website boasts that the speakers have a completely flat response, but actually, the frequency response can be adjusted according to your room by way of calibration, so I’m guessing what they mean is that they will deliver accurate flat-//sounding// results whatever your room. The idea is that your room might, (very simplistically) introduce a peak, say, in the lower mids of the frequency range. The speakers calibrate themselves for this deficiency so iron out the peak delivering what it, effectively, a flat response.

You set this up very easily with the MTMs. Simply plug the included ARC reference mic into the back of each speaker and place it in your preferred listening spot (aka where your head will be). Hold down a button and the speaker generates four frequency sweeps – like laser noises – and each speaker instantly calibrates itself to attempt to deliver a response that compensates for your room. The process takes less than 30 seconds and you simply monitor the different colours on the LED as it does so. As to the results, well, they tie in quite nicely with my listening tests.

In a slightly different set of tests to my usual methods of testing speakers, I decide to test the MTMs in a ‘before and after’ calibration scenario. Using my usual list of well-produced commercial tracks and not-so-well-produced (but well understood) own tracks. I put the iLoud MTMs up against both a pair of Dynaudio LYD 48s and the JBL 104s, simply because I have these almost permanently set up in my studio to give me a good AB reference.

Three-way expensive speakers and two-way cheaper speakers should give us interesting results. Using my Audient interface, I am able to switch between each set using the four outputs so comparisons are easy to make and instant. (If it sounds like I’m showing off, it’s not – it’s actually taken me ages to find this suitable and easy setup for testing speakers and I’m simply quite proud of it!) 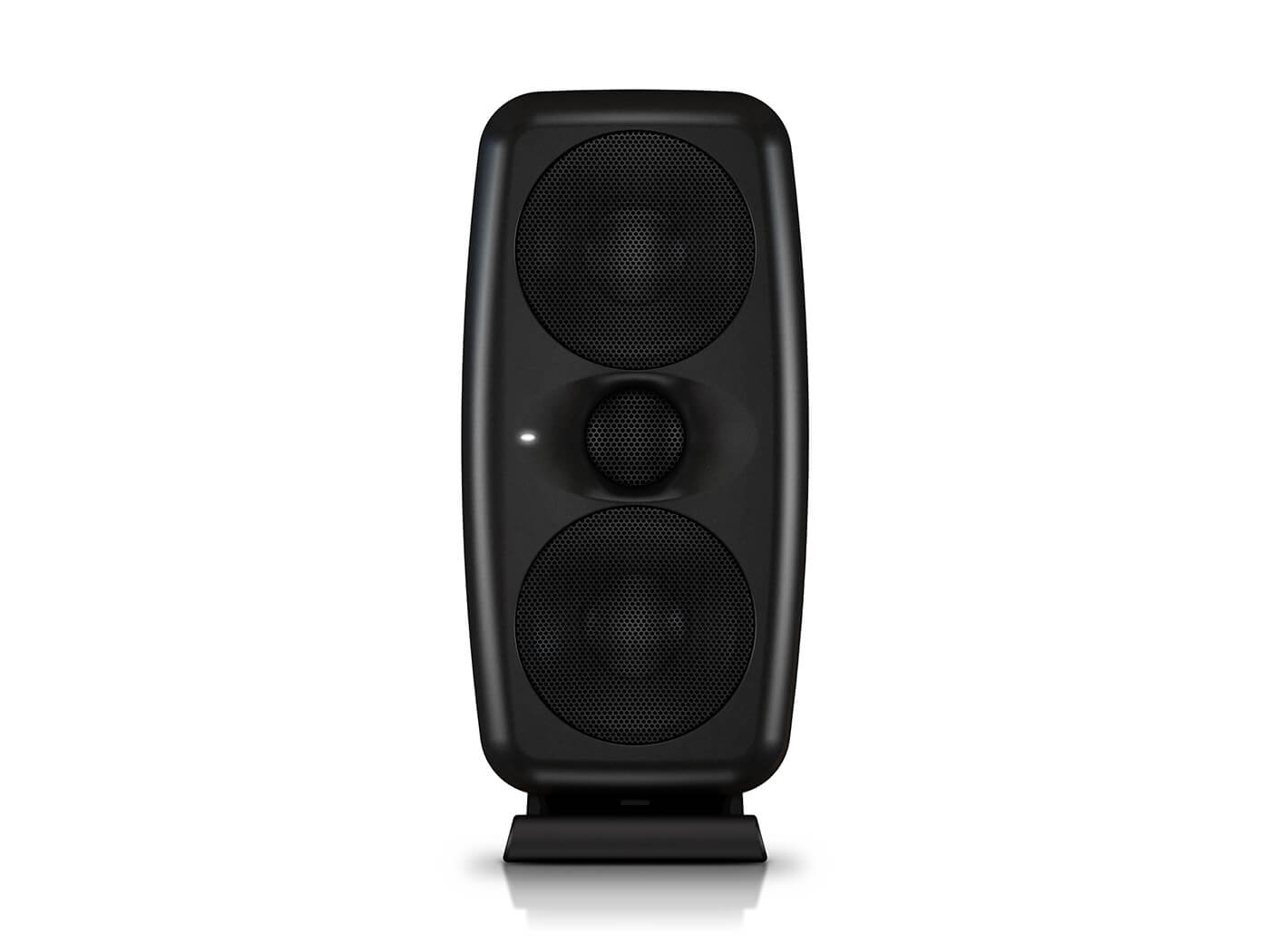 Interestingly, putting the MTMs against the Dynaudios gave me the exact results you might expect, given the differences in specs, size and price. The smaller monitors sounded boxed in and restrained in comparison to the lovely breadth and depth of the larger three-way Dynaudio monitors, although easily held their own in terms of punch. But then I decide to calibrate them using the method above, expecting not to hear too much difference, but I’m surprised.

They do suddenly open up, and even allowing for some psychological mind trickery – I am expecting them to improve, so perhaps they do – there is definitely a flattening out in the sound, with the MTMs now more spread out and opened up, revealing more detail of the mix. They are silky smooth with tight mids and a controlled and certainly not coloured bass. The differences are almost as dramatic as using the room calibration software on Genelec’s incredible The Ones last year, so now I’m worried about the state of my room.

Comparing them to the much cheaper JBLs, the MTMs are much more defined in the mids, although both delivered a surprising amount of low-end detail and shape for their size. As Cliff once said, it seems that “I like small speakers” after all.

This has been, for me, was one of the most interesting tests I have done.
Small studio monitors have definitely come of age with IK and JBL and the MTMs will be a serious contender against speakers going right up in size and to over four figures in price. They are not as cheap as some – but still cheap for studio monitors – and I wouldn’t hesitate using them as secondary monitors and even my primary ones if I had space restrictions. Now to go and sort out my room acoustics…

Studio monitors are, not even arguably, the most important item in your studio (aside from, arguably, yourself). If you have spent a fortune on synths and sound makers, but are listening to them all through inaccurate speakers, you’ve wasted your synth cash. The idea is that your speakers deliver a completely true picture of the music you are making, so that if you adjust the mix, what you adjust translates to systems outside of your studio. 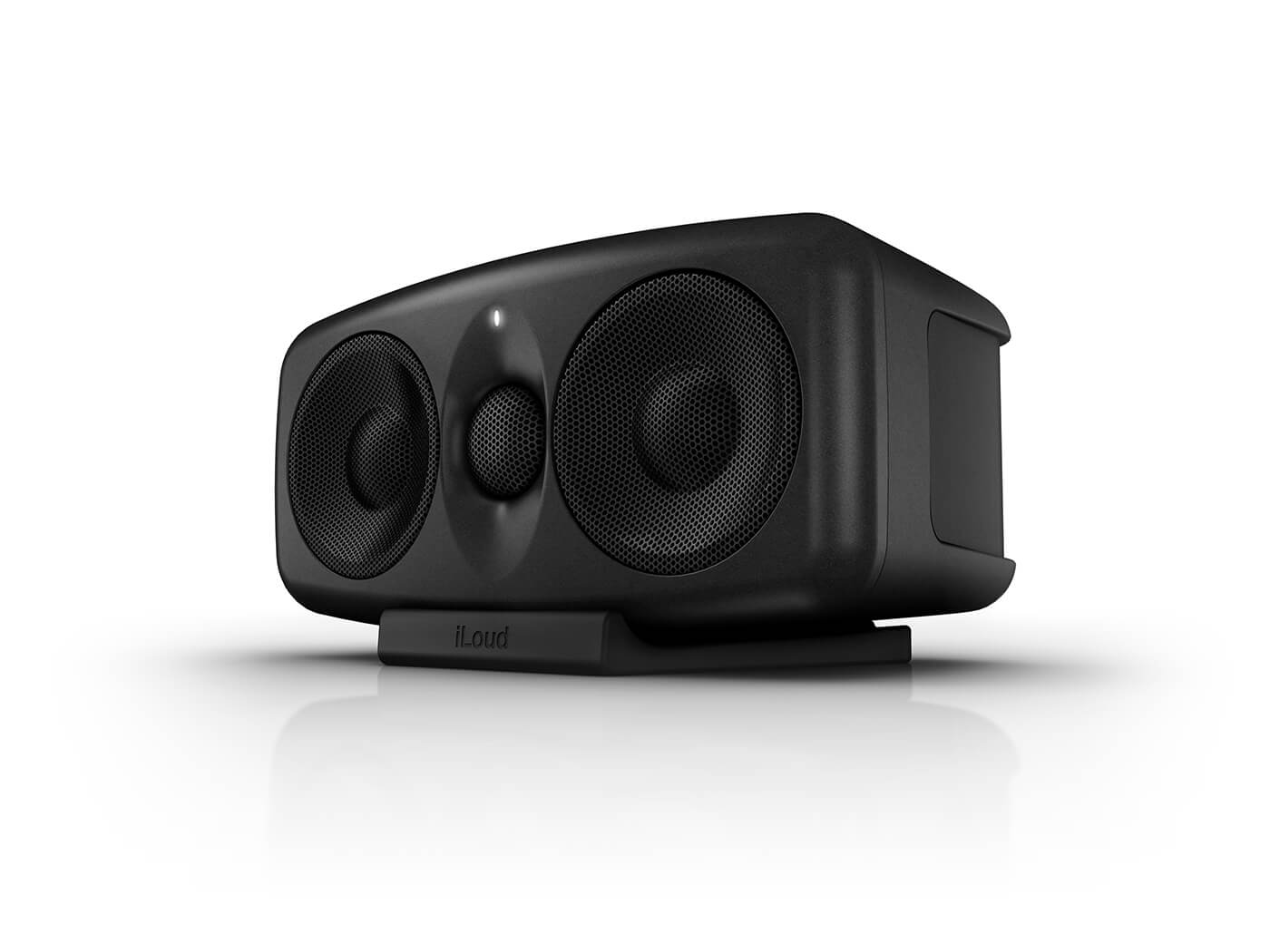 Until recently, accuracy cost a fortune – but small speakers like these are starting to deliver better and better results. So can these deliver the truth? Yes they can. The calibration software is your friend here so make sure you use it, because it opens up the speakers to deliver truer results. If you are pushed for space and cash, these could well be your answer. 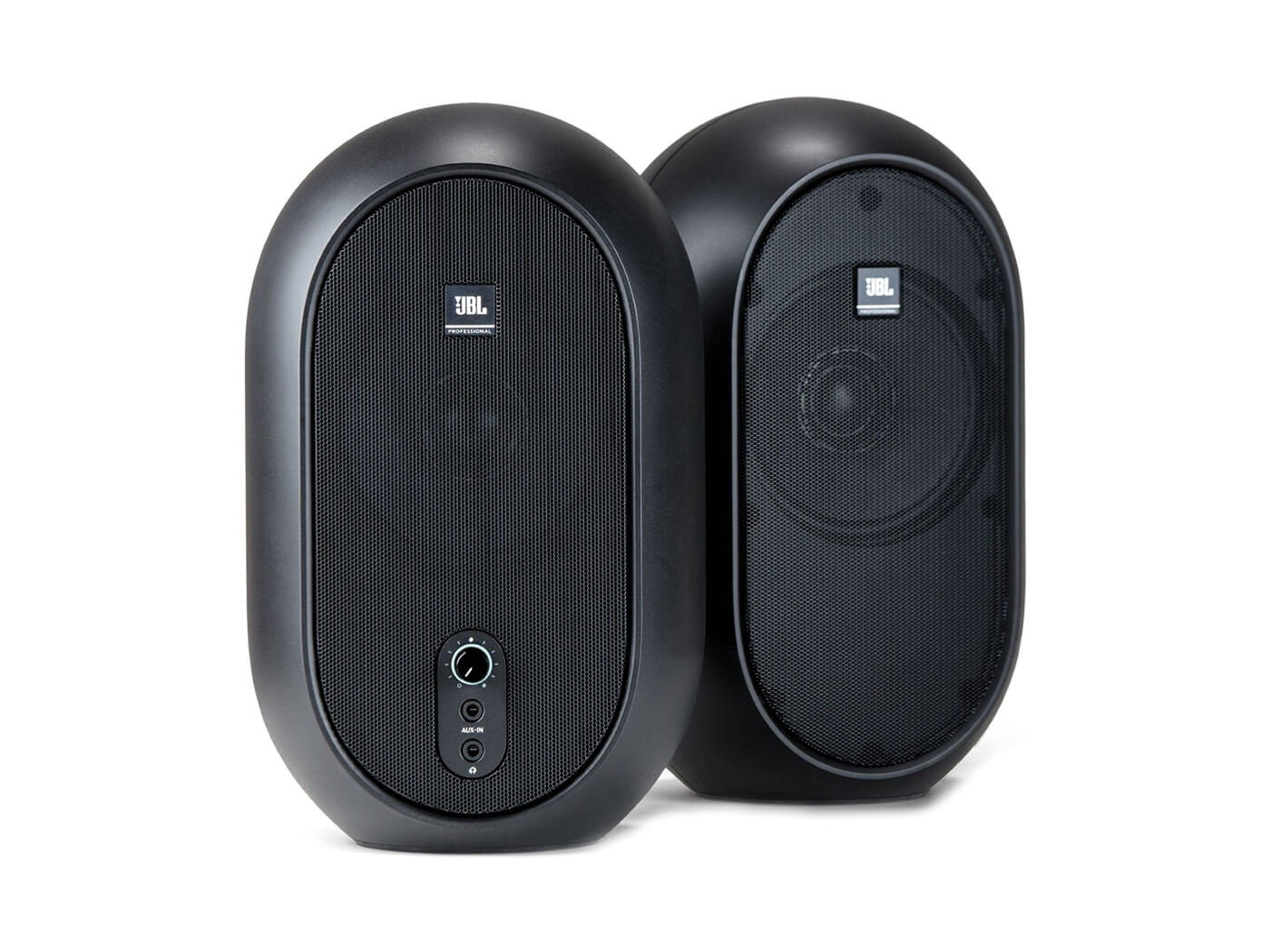 I’ve compared these a little too much to the IKs in the main text, as I’m using them as secondary monitors. They really do deliver a great sound for the size and money and hold their own, bar the mids, to the IK MTMs. 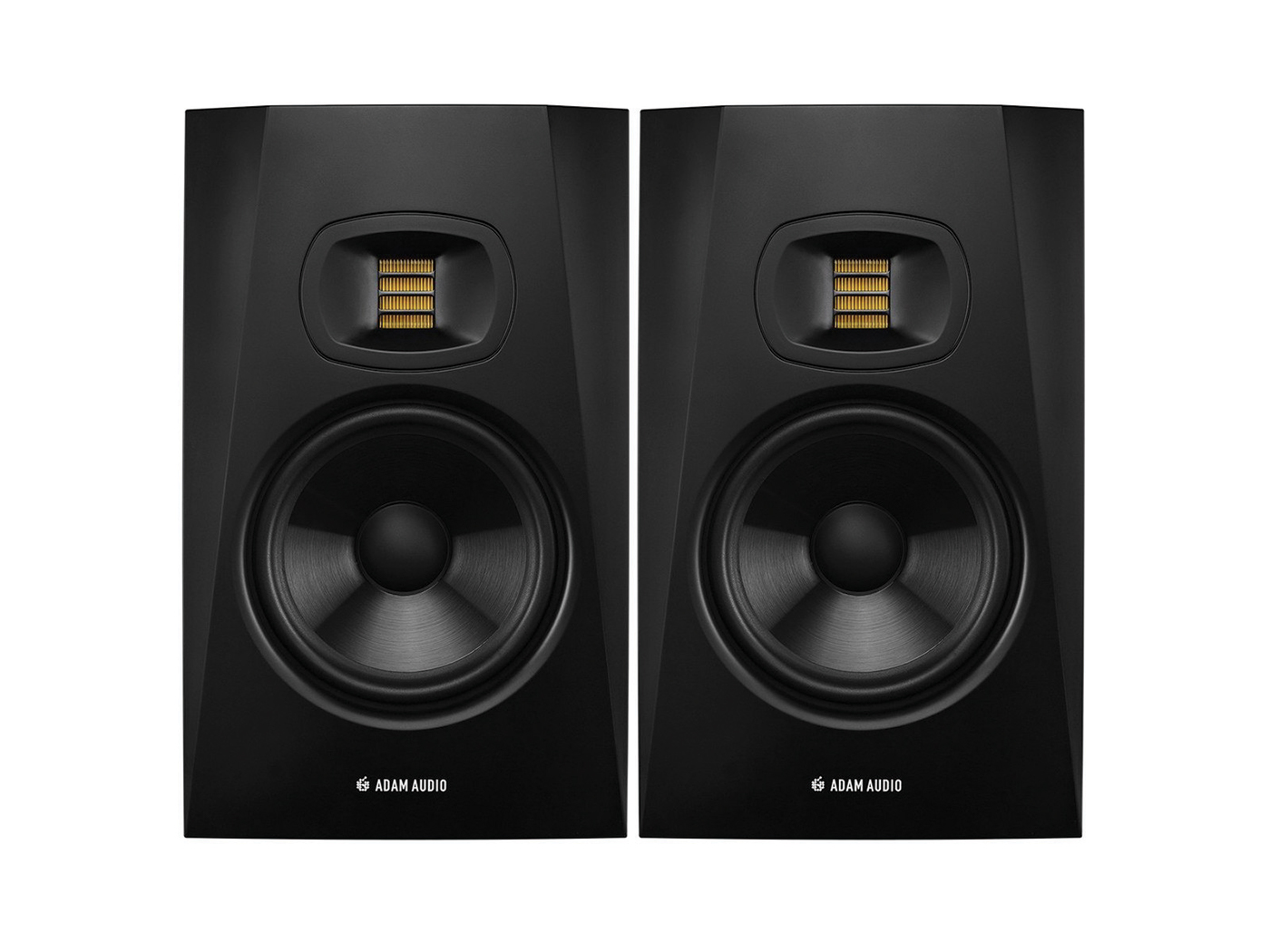 They are larger speakers – although still quite compact – but these Adams really do fight for your attention and at almost silly money. “Astonishingly good monitors” and “incredible” for the money, we said.