Reverb pedals are typically designed to place your sounds within a space. With Eventide’s Blackhole pedal, the company intends to launch your sound into outer space. 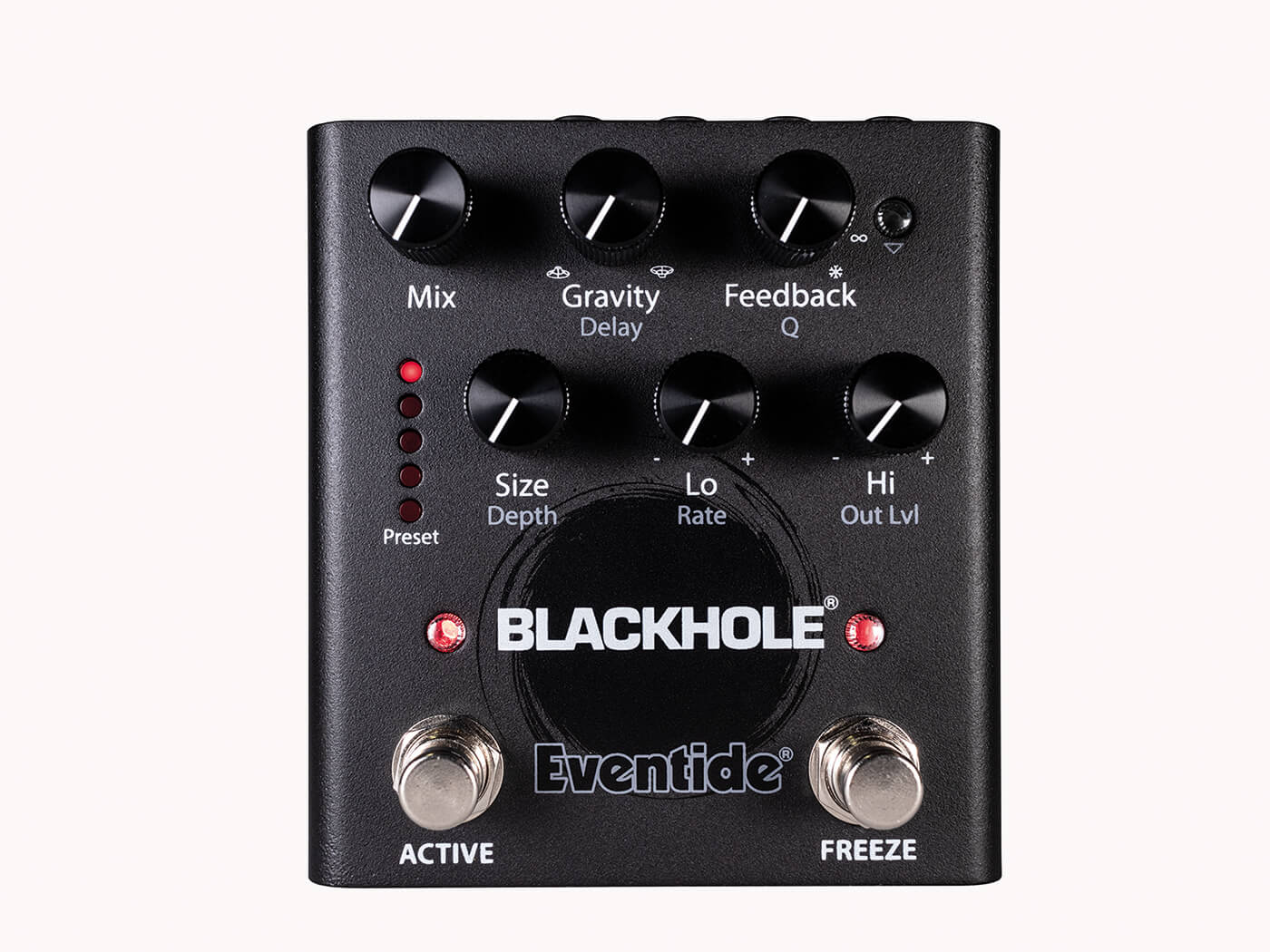 The recreation of hardware devices in software form has been a common practice for around twenty years – and several companies make excellent emulations of their own products in software form. However, Eventide’s direction here is slightly less common, releasing one of its digital reverb presets and plug-ins as a standalone pedal. Eventide has a long history of making plug-ins, rackmount effects units and stompboxes alongside each other, so if anyone was going to succeed with this metamorphosis – it would be Eventide.

The Blackhole is based on an algorithm that has been available for at least ten years. It can be found as a plug-in, and is also available for use in their H9 multi-effects pedal amongst others in the company’s top-of-the-line rackmount effects unit range. However, Eventide realised a market existed for the effect as a standalone hardware device for users that didn’t want to splash out on the more complex H9 or the rackmount effects units. 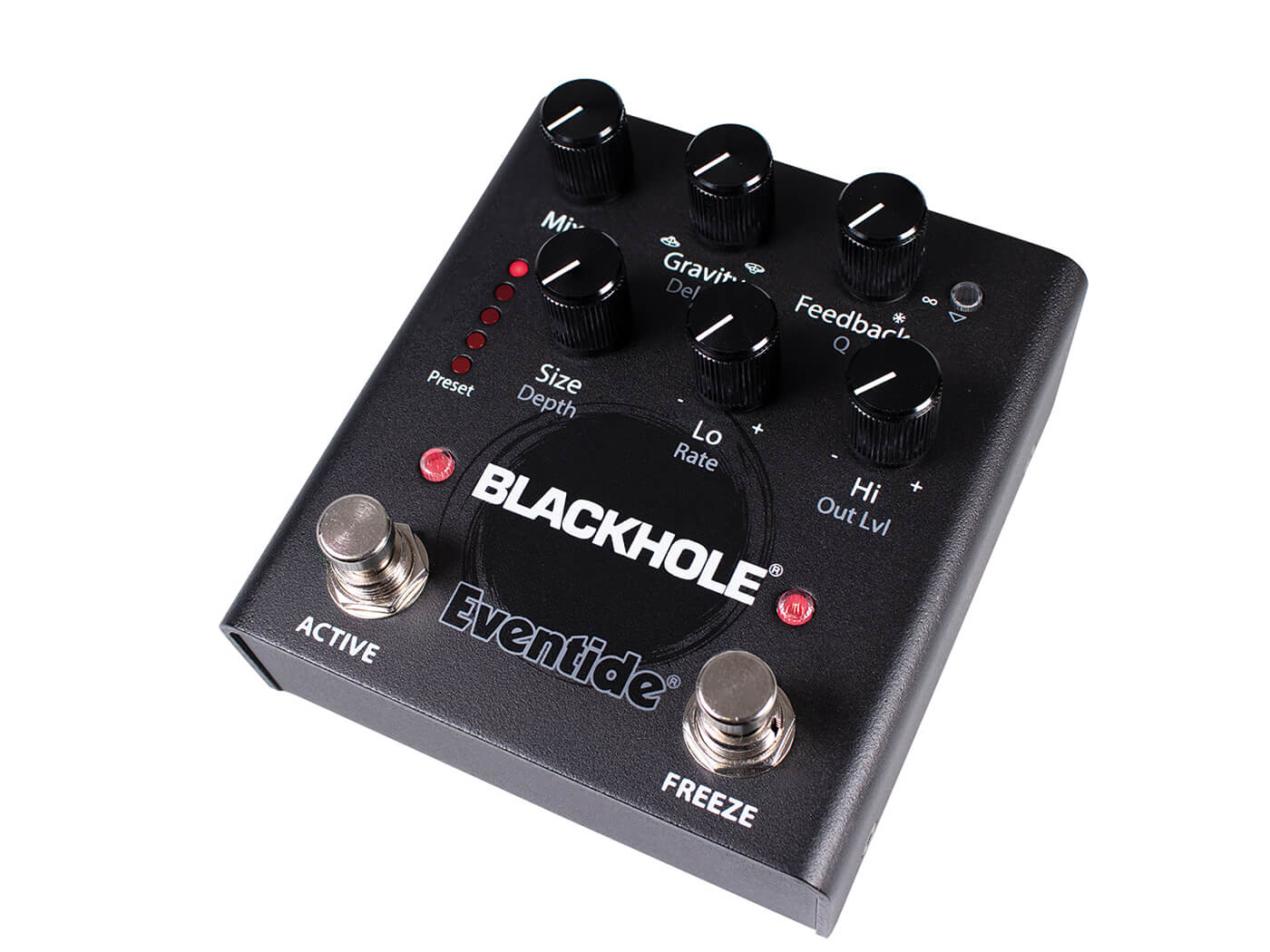 Simply put, Blackhole is a reverb pedal – but not an ordinary one. If you want some beautifully emulated plates and chamber reverb sounds – then the Blackhole is not the product for you. However, what it does do is contextualise reverb as a creative effect. The name Blackhole is designed to evoke the image of space as an endless expanse in which sound can continue forever – and the effect certainly lives up to its name. The endless, surreal spaces it can create do feel like they could fill the cosmos.

This product is aimed at both guitarists and studio producers and it is this latter category that we will be focusing on here – the pedal conveniently comes with a switch at the back for selecting whether the input sources is at instrument or line level. When connecting to a DAW, make sure you’re at line level because it’s a lot louder than instrument level, and you’ll get a lot of clipping if you send line level through the instrument level setting. 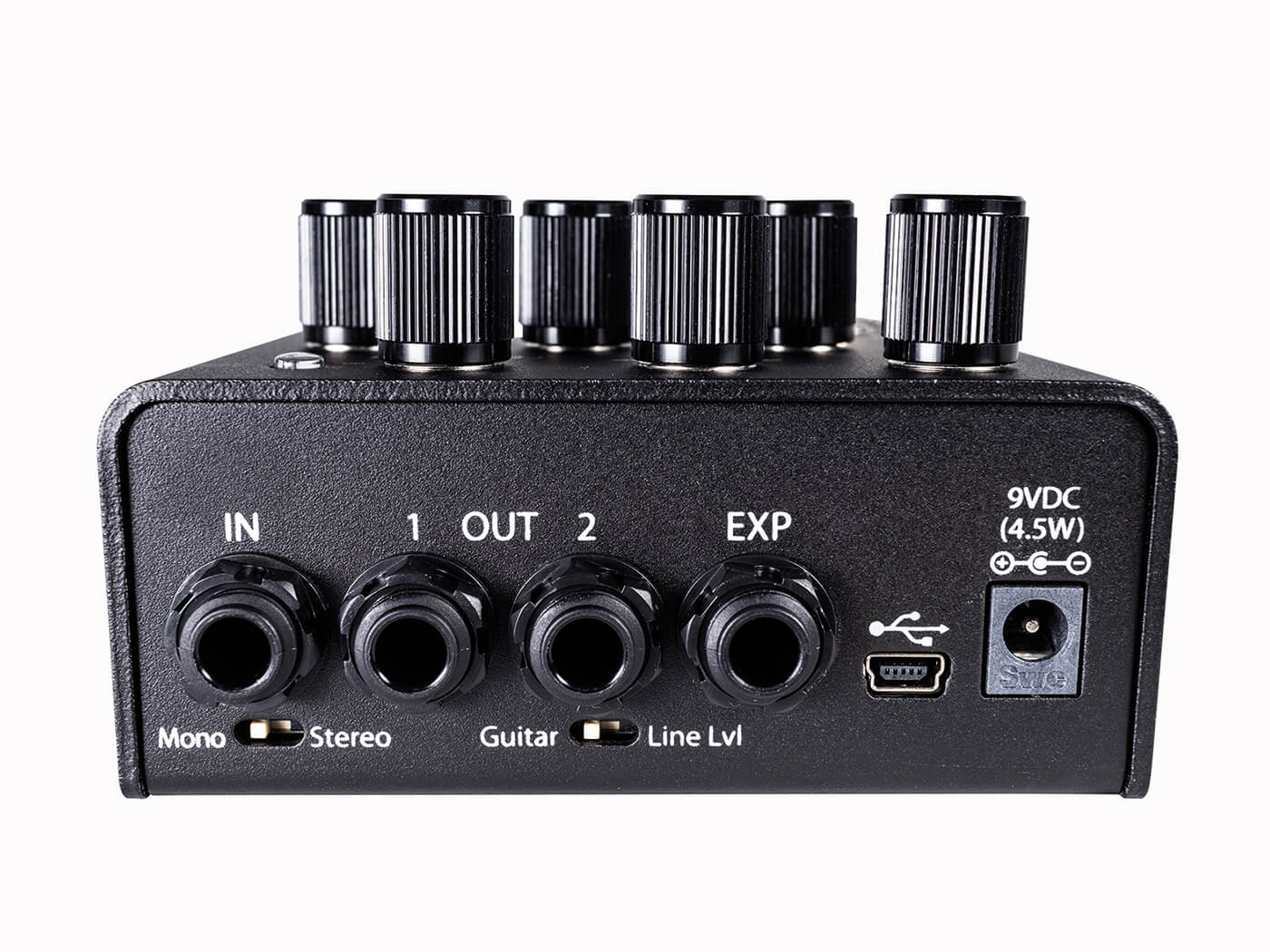 The first note we make when opening up the Blackhole is that it’s very attractive. Initial images show a plain black box, but there is an ominously cool black-on-black representation of a black hole on the pedal. The unit is a solidly built and has a chunky metal case with nicely designed pots that all move smoothly and allow for some very precise control. The pedal also includes a power supply to get connected straightway, no 9V battery-rummaging required.

Before we explore the pedal’s deeper functions, it’s always fun to dive straight in and see what sounds can be wrought out of it via the presets that come installed on the pedal. The pedal is hooked up to my Audient iD44 on outputs 3 & 4 and the first thing I send through is some piano from my DAW, just to get an initial impression. This first preset is surprisingly subtle, but after a bit of random knob twiddling we’re presented with some satisfyingly other-worldly sounds. The other installed presets are also very creative starting points and one of them has a quasi-swell sound that, when applied to synths and other keyboard instruments, is pretty sublime. 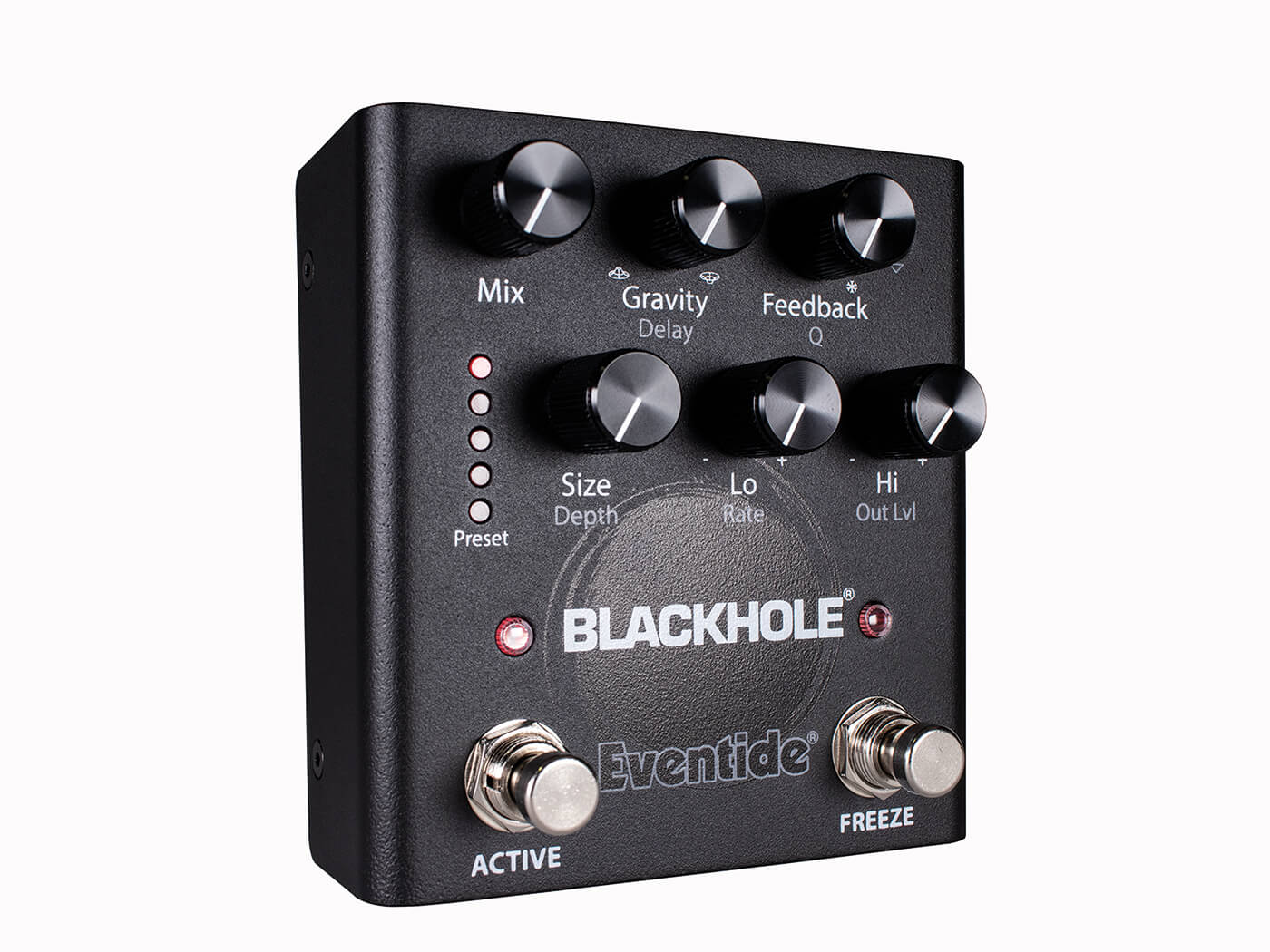 To start from scratch and create your own sounds, we first need to get a handle on the various pedal controls. Most knobs have a primary and secondary function. The mix knob adjusts the wet/dry blend and has no secondary function – so whichever layer you’re on it’s always active. The Size knob adjusts the size of the reverberation space. The full sweep of the pot spans very tiny rooms to enormous, cavernous sounds. Interestingly, despite it not being what this pedal is designed for, it is possible to get some quite ‘normal’ reverbs with the Blackhole with the size set quite small and the feedback relatively low. Personally speaking, we don’t let the size knob dip below 12 o’clock because that’s where the Blackhole starts to get more ‘spacey’.

The only confusingly named control is called Gravity and this is essentially the decay control. However, rather than just creating longer and longer decays from left-to-right, the control can be set to be either a natural decay or reverse decay to create a backwards reverb tail. Which, with the mix 100% wet can create lovely swell sounds. As the Gravity knob moves from 12 o’clock in either direction, either forwards or backwards, the decay changes length. We’d  expect this to be the same in both directions – but it isn’t. The shortest forwards decay is at 12 o’clock and the longest at 6 o’clock, but the reverse reverbs are the complete opposite of this, with the shortest decay at 6 o’clock. This doesn’t take long to get your head round, but is a bit of a head-scratcher initially.

The secondary functions are accessed by pressing a small button in the top right of the pedal and then the controls take on the functions shown in grey on the pedal. The most useful of these is the pre-delay length because this has a massive impact on the speed and length of the reverb sounds. The modulation functions here are basic but effective. The modulation in question is vibrato – but when blended with the dry signal creates a chorused effect and is quite nice to add a subtle movement to the sound. It can be useful for smoothing the edges of certain mixes.

In general, this pedal sounds nothing short of amazing on all form of keyboard instruments – I found that it even turns screaming analogue lead sounds into beautiful textures that can almost be used as pads with a bit of EQ. We attempt to do this with the EQ on the pedal, but the end result isn’t extreme enough for what we had in mind. The EQ is a nice addition, but it’s only for subtle shaping rather than extreme sound design.

The biggest surprise for me was using the pedal on drum sounds, particularly snare drums. In addition to ethereal sounding drums, the very long decay available on the Blackhole creates some amazing atmosphere with drums that would be perfect for re-sampling.

The Blackhole is a stunning piece of equipment. Imagining having this permanently wired in, on our desk and allowing instant access to some really stimulating sounds and moods is tantalising. Fortunately, the Blackhole allows for settings to be saved – so if we do come across that ‘perfect sound’ and want to use it again later it can be stored onboard in one of the five memories accessible via the foot switches or via the 127 MIDI-controlled memories. But the real appeal here remains that immediate ability to stomp it on, twiddle knobs until we’re in a fresh sonic environment, and wallow deep in Blackhole’s realm of possibility. It’s a gem.

The plug-in version of this effect has been around for some time and is around £100 cheaper than the pedal version. However, the immediacy of the pedal is its appealing characteristic. Also, because it’s hardware with my presets loaded into it, the pedal can easily travel with you when swapping between studios. Since we’ve had it, the Blackhole has been permanently wired on an auxiliary output from our interface, meaning we can route any sound to it while tracking. The ability to change the decay length or reverb size quickly negates the need to open additional plug-in windows. The immediacy of the pedal allows me to be more creative in a shorter space of time and focus on what’s important – the music.

The NightSky is designed to be a complete ambience sound design pedal and in addition to large ambient soundscapes it can also modulate and pitch shift the repeats, and has a step-sequencer for change parameters of the reverb tail in sync with the music.

The Slö is a small format pedal that can create the ambient textures using reverb tails, but it has significantly fewer adjustable parameters. It has three basic modes that all have slightly different characteristics by combining the reverb with an octave-shifted reverb.