Has the king of stompboxes successfully condensed its flagship multi-effects unit into a box that works for guitarists and tabletop electronic music makers?

You’re just as likely to see Boss pedals under the feet of a guitarist, as you are in a tabletop electronica set-up. And the GT-1000CORE is seemingly tailored for both axe folk and knob-twiddlers alike, compressing the brains of the brand’s flagship GT-1000 into a compact stereo unit.

Backed by an array of silver knobs, the large liquid crystal display dominates the interface. The rear panel includes stereo and mono inputs, effects sends and returns, outputs for stereo or headphones, inputs for expression one and control two and three, and a mains power input. The left-hand panel features a micro USB port, MIDI-in and MIDI-out mini-jacks, and an input for expression two and control four and five (for switching with compatible amps). The GT-1000CORE features 140 amp simulations and effects, including everything from vintage pedals to sophisticated stereo effects based on algorithms from Boss’s 500 series pedals: chorus, compression, overdrive, EQ, flanger, looper, pitch effects, tremolo, delay, and reverb.

Getting started with the GT-1000CORE and a guitar is easy. Use the footswitches to navigate the 250 locked factory presets and 250 customisable user slots. The CORE features 32-bit AD/DA, 32-bit floating-point processing and a 96kHz sampling rate. Throughout its documentation, there are many references to Multi Dimensional Processing, a technology that allows for deeper and more responsive signal processing through amp and effects modelling. Tech talk or not, it’s immediately apparent how good Boss’s Augmented Impulse Response Dynamics amps are in their representation of Marshall, Fender and Mesa/Boogie sounds. The tones are lifelike, and playing feels dynamic and responsive.

This is a rewarding and high-end audio experience aided by rapid patch changing. In fact, Boss claims it has the fastest switching on the market – and we can believe it. The USB connection acts as an audio interface, so you can send instrument inputs to your DAW and hear beats and arrangements coming back in the other direction. We have no latency issues at all using Ableton Live 10 on a 2019 iMac.

USB also allows you to send MIDI from your DAW to load CORE patches or change effects parameters, and facilitates the Boss Tone Studio for GT-1000 application, which is an accessible way of managing presets on a bigger screen. Up to 16 user impulse responses can be uploaded too.

There’s an impressive 24 effects blocks available but some of them, including the EQs, delays and reverbs, are fixed-function. But there are three general-purpose blocks to which any effect can be assigned. In addition to the effects themselves, there are amps with microphone and speaker options, and master effects. The icing on the cake is the ability to split the signal chain at up to three points. Then the real fun starts, as you can combine different amp types and run parallel chains. There’s also a level of hardware customisation here – the footswitches can be reassigned to different functions, and external expression pedals can be attached.

The two send and return jacks can be used individually or together in stereo, and can also function as sub outputs. They can be used as a second pair of outputs independent of the CORE’s master volume, making them suitable as direct outputs to a mixer or front-of-house.

Bass players get a smaller number of amps and presets to choose from. These are based on an Ampeg SVT, a generic clean model and Boss’s MDP X Drive. They also get dedicated bass versions of effects such as compressor and chorus. We enjoy it more when we disabled the onboard amps and plug into a Trace Elliot Elf amp and Phil Jones Bass cabinet. Whatever instrument or source you’re using, it’s vital to choose the correct output type.

How does the GT-1000CORE fare with stereo music-technology gear, such as sequencers and samplers? The Akai Force has four outputs, so we connect outputs one and two to the CORE’s first and second inputs, and the Force’s outputs three and four to the CORE’s first and second returns. From here, it’s possible to create two independent stereo effects chains, using the CORE’s send and return objects, which can subsequently be merged back into a stereo mix.

This has the makings of a superb set-up, as the CORE becomes the effects-loaded, MIDI-friendly mixer that tabletop users dream of. As far as MIDI is concerned, a sequencer such as the Force can send program changes to load CORE patches and CCs, which can be assigned to effects parameters. As well as its guitar effects, the CORE includes presets such as EQs, compressors, slicers, pitch-shifters and reverbs. If you don’t want to connect a stereo device, use two mono devices instead, and the Core’s mix-management devices will provide options for panning and so on. It’s even possible to get the Core to trigger each of the parallel channels by frequency range or dynamics, rather than simply choosing A, B, or A and B.

Using the GT-1000CORE is enjoyable. We love the display, even if we still favour the USB cable and desktop software for those long editing sessions. But if you’re worried about connectivity and the organisation of switches, you might want to look at the full-scale GT-1000 instead. We’d like to have seen a jack-MIDI adaptor included with this unit – it may not be essential for instrumentalists. Still, for electronics geeks, it’s another extra inconvenience that must be budgeted for.

The flexible GT-1000CORE is functionally viable with or without a computer, and sonically it’s excellent, with effects ranging from classic Boss pedals to sophisticated stereo patches. While using it, you might occasionally long for a speciality pedal capable of unique functions but, in terms of covering a lot of ground in a compact form, the CORE does the job. 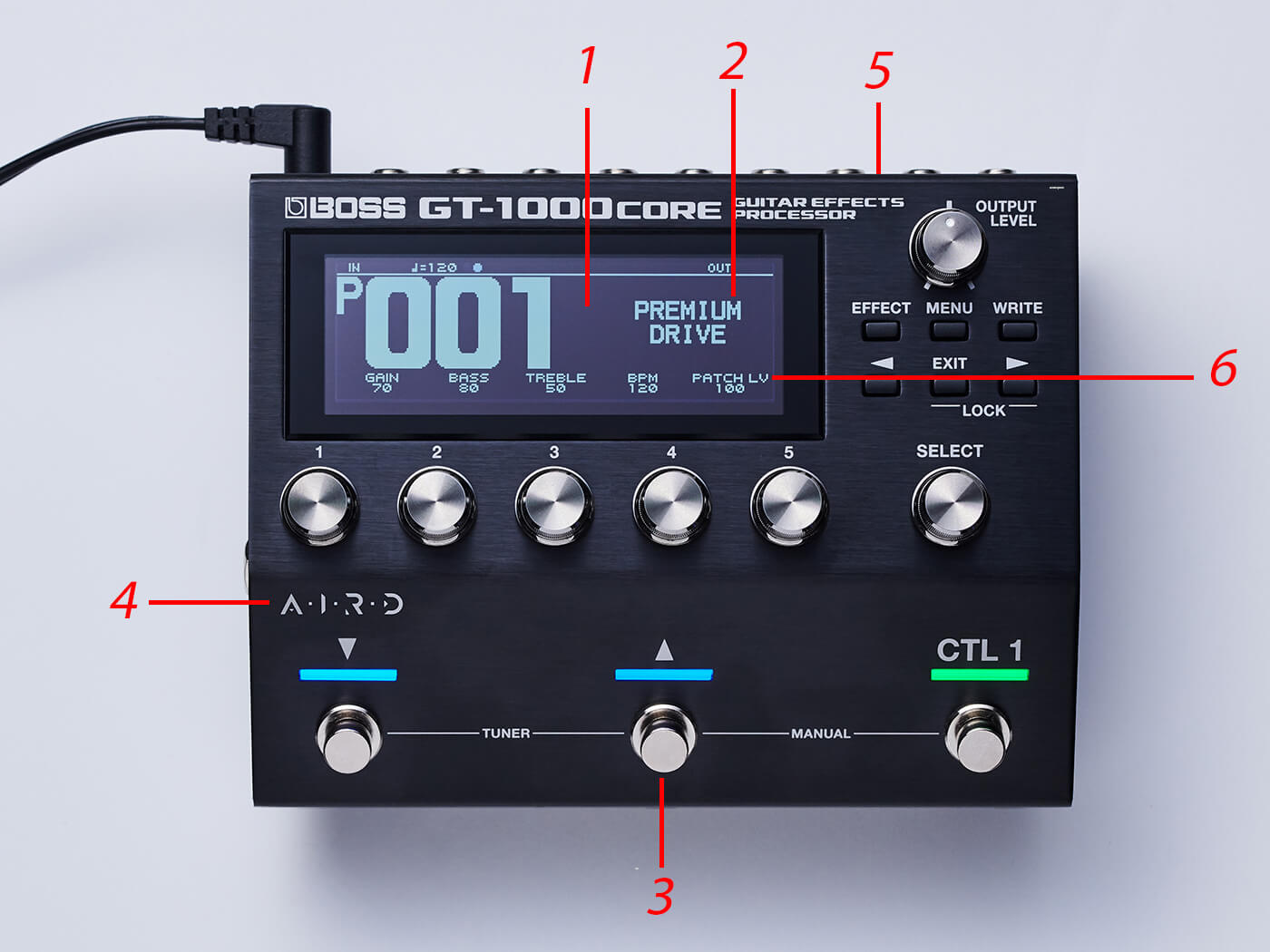 1. This large LCD makes the GT-1000CORE a convenient standalone unit; it’s easy to edit and save settings during soundchecks and rehearsals when you have no computer to hand. Use the Effect button to view and edit effects chains and settings.

2. Physical connections include stereo in/out, send/return, phones, and two expression/footswitch/control jacks, as well as a USB port and MIDI-in and -out connections on 1/8 jacks (adapters required) for integration into larger setups.

3. These three footswitches cover the basic controls of the GT-1000CORE, including the tuner, preset-browsing and accessing user-defined functions. The five knobs below the display are for editing patches.

4. The AIRD logo refers to Boss’s Augmented Impulse Response Dynamics technology, which provides natural response and sonic integration no matter the incoming signal. It is particularly relevant to the onboard amp sims.

5. The GT-1000CORE contains more than 140 amps and effects, some based on classic Boss stompboxes and others reflecting high-tech products such as the brand’s own 500-strong range of stereo effects, including the RV-500 reverb pedal.

6. Effects and amp parameters are displayed here, alongside input and output levels, and compressor activity.