Apogee’s DualPath plug-in tech gives you near-zero latency recording with DSP effects, without limiting your processing power for mixing. Could this be the desktop audio interface of the future? 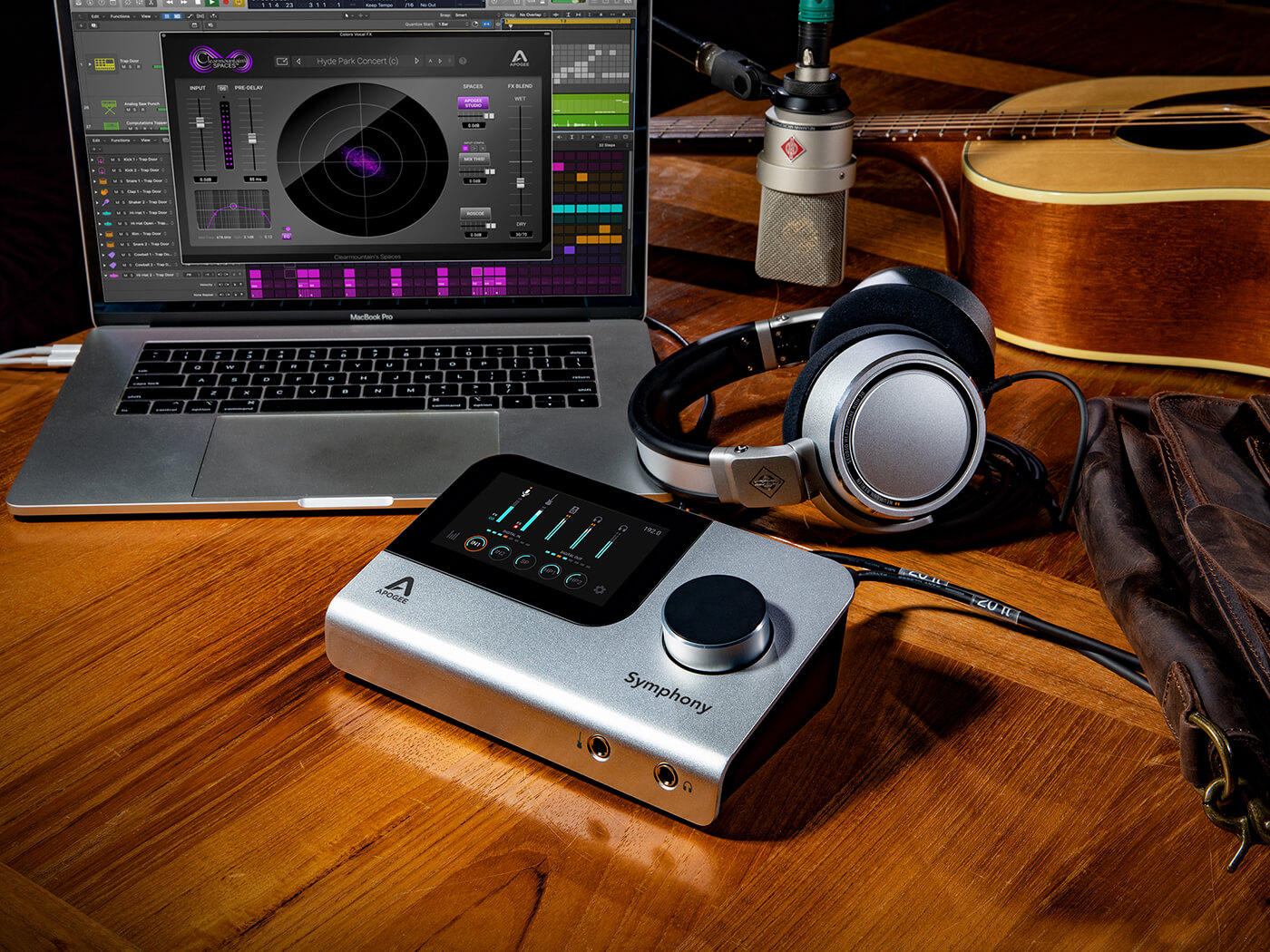 Apogee’s reputation for peerless AD/DA conversion is on full display in this stylish audio interface, but it’s squaring off against a well-established competitor.

One of the biggest problems in computer-based production is recording latency. If you want to record with near-zero latency and apply plug-in effects in realtime, then dedicated DSP is the perfect solution. This is how Pro Tools HDX and Universal Audio Apollo recording systems work.

However, when it comes to mixing, dedicated DSP can be limiting. You get limited plug-in counts, and your computer must be connected to it. Avid solved this problem in Pro Tools with their AAX plug-ins which can run either natively on a host computer or on Avid DSP. The only drawback is the high price. Apogee aims for a similar result much more affordably and for a wider range of DAWs.

Symphony Desktop is an audio interface for Mac, Windows and iOS based on technology found inside their existing rack-mounted Symphony series. Critically, it uses Apogee’s DualPath technology that lets you run specific Apogee plug-ins natively or on the interface’s built-in DSP, for fuss-free near-zero latency recording.

The new interface has a compact, solidly built wedge-shaped enclosure finished with an aluminium powder coating that gives an attractive, silvery sheen. The stylishness is enhanced by a minimalist control panel featuring just a single dial and a large touchscreen.

This touchscreen affords access to all of the same settings you would typically find in control panel software. So, you can set input and output levels, manage routing and monitoring, and even configure the Symphony’s built-in preamp models and channel strip, which run on the unit’s internal DSP, all from the touchscreen.

Adjusting an on-screen fader or value involves touching the control to select it and then using the rotary control to dial in the desired value, which is simple enough. It is a shame one can’t also drag on the screen with a finger, though. You can, of course, access all the same settings via the included Apogee Control 2 software, which is arguably a bit easier, but the choice is yours. The touchscreen will come into its own when Apogee introduces standalone operation for Symphony Desktop, something that’s on their roadmap but not currently in development. 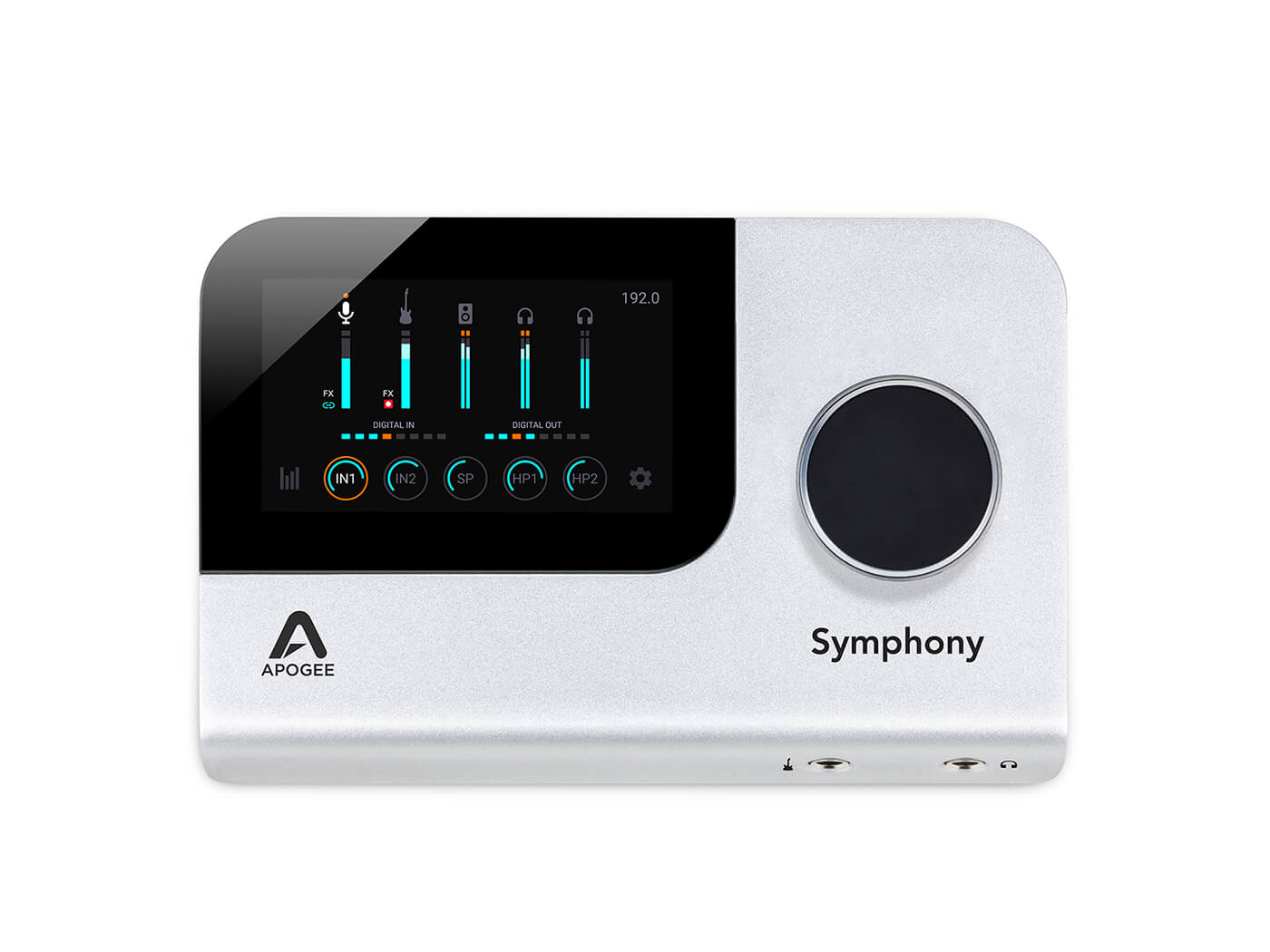 Symphony Desktop provides two analogue input channels that accept mic, line (-10dBv and +4dBu) and instrument-level signals. There’s an additional channel 2 instrument input on the front panel for quick access. And, rather than having this defeat the rear input (or vice versa), you can choose which connector will feed the channel from the touchscreen or control software.

The rear panel inputs are on combo XLR/jacks, but the jack sockets are intended primarily as unbalanced instrument inputs. These will be able to cope with many unbalanced line signals, too, such as the signal from a synth, but if you want a standard balanced or unbalanced line input (with standard impedance, signal level, headroom, etc.) you need to hook these up through the XLRs.

Of course, this introduces a potential point of failure in home studios. For example, you must be careful not to inadvertently send phantom power into a synth or digital effects unit. When we asked Apogee about this design decision, they pointed out that XLRs have traditionally been used for line signals in the studio, and that they are a superior connector to ¼-inch jacks. While this is true, and using jack-to-XLR converter cables isn’t a massive deal, we still feel it goes against the grain for a modern audio interface and will not be what most potential buyers expect.

That aside, the analogue inputs feature Apogee’s excellent Symphony preamps (from the flagship interface), which provide up to 75dB of crystal-clear gain. They also benefit from the company’s Alloy preamp tech, which lets you modify the impedance and response of the preamp’s analogue circuitry with additional processing in the digital domain. This allows for highly accurate emulations of classic analogue preamps, with two models built in.

AP-66 is based on the vintage Class A solid-state Neve 1066 preamp, and apes the original’s pleasing low-mid character and slight compression of higher frequency transients. The alternative AP-57 model is based on an Ampex 601 tube preamp from the 50s, and oozes with analogue warmth and saturation.

The unit provides two main ¼-inch output channels for driving your monitors, and two independent headphone outputs in the form of a 6.35mm front-panel socket and a 3.5mm minijack awkwardly tucked underneath the main output jacks on the rear panel. This isn’t easy to get at once you’ve got the interface all hooked up and would have been much better placed on the large, spacious front panel alongside its 6.35mm counterpart.

Ten additional ins and outs come via Symphony’s optical digital I/O. This can run in stereo S/PDIF mode at up to 96kHz sample rate, in eight-channel ADAT mode at up to 48kHz, or in four-channel SMUX mode at up-to 96kHz. A nice feature here is that hardware connected to Symphony Desktop’s digital inputs needn’t be running at the same sample rate as the interface, and needn’t be locked to the same digital clock. It’s all dealt with for you by Symphony Desktop. The digital outputs have similar realtime sample rate conversion too. 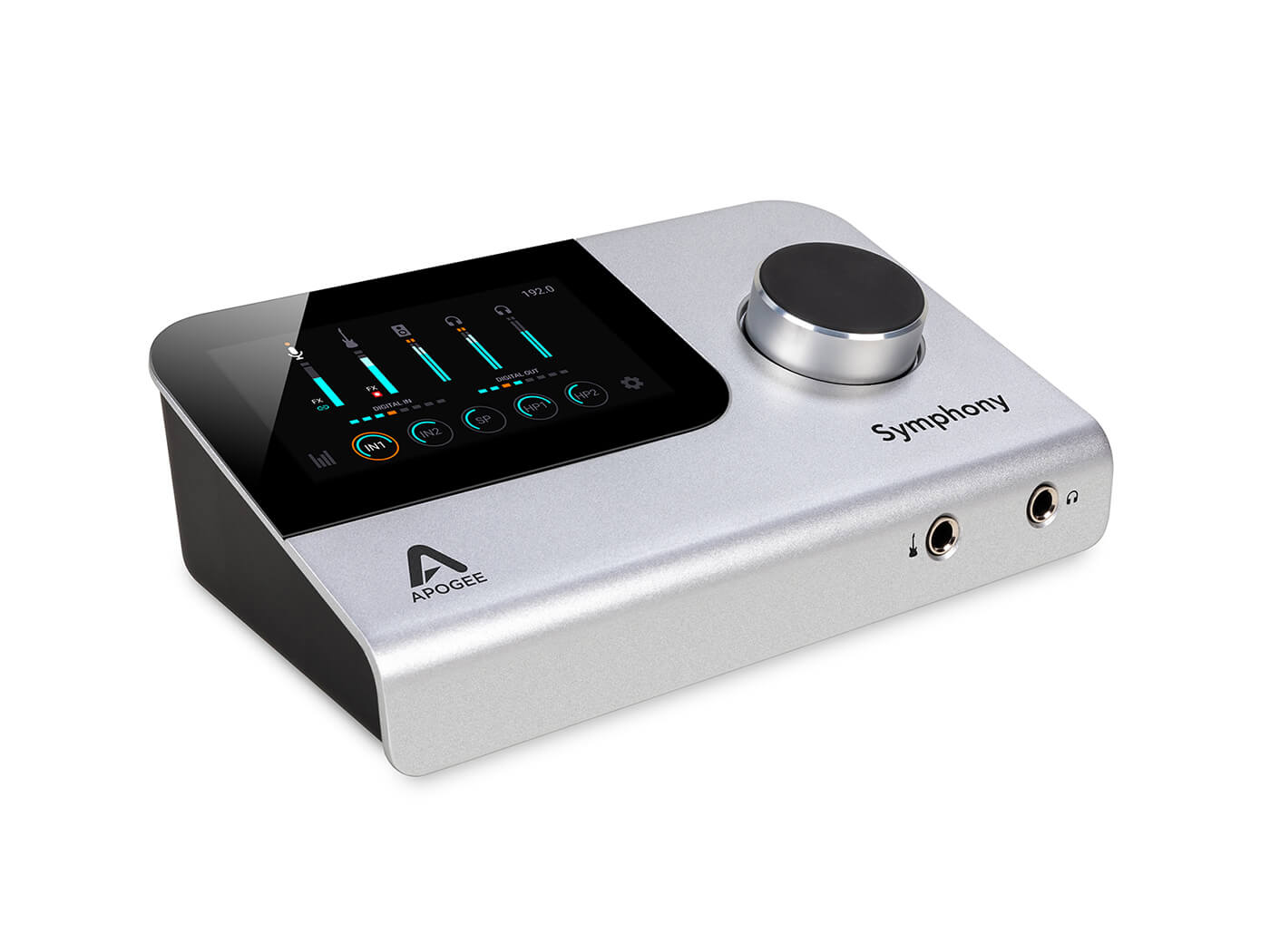 Two paths are better than one

Symphony Desktop’s standout feature is Apogee’s DualPath effects system. This provides wrapper plug-ins that you load in your DAW, and into which you can add instances of various plug-ins. The clever bit is that you can choose whether these plug-ins run on Symphony Desktop’s built-in DSP, or internally on your computer. There are two wrappers – Channel FX and FX Rack. The former allows you to insert plug-ins on Symphony Desktop’s input busses, and so these plug-ins always run on the unit’s DSP. You can also select whether Channel FX processing is included in just the recording signal, just the monitoring signal, or both.

At present, only one of Symphony Desktop’s included plug-ins is available in Channel FX mode: Apogee ECS Channel Strip, which provides EQ, compression and drive. The v1.2 release of the Symphony Desktop software promises to make the other Apogee FX Rack (native) plug-ins work as Channel FX (DSP). These are a collection of five EQ and dynamics plug-ins that cover both modern and classic styles, and can currently only be loaded into the FX Rack wrapper, which runs in your DAW, using your computer’s native processing.

The v1.2 software is due to make these plug-ins available to the Channel FX wrapper too, so they can run on Symphony Desktop’s onboard DSP. The update will also make the Channel FX system available on all of the digital inputs, which will be a fantastic addition to the unit’s functionality. 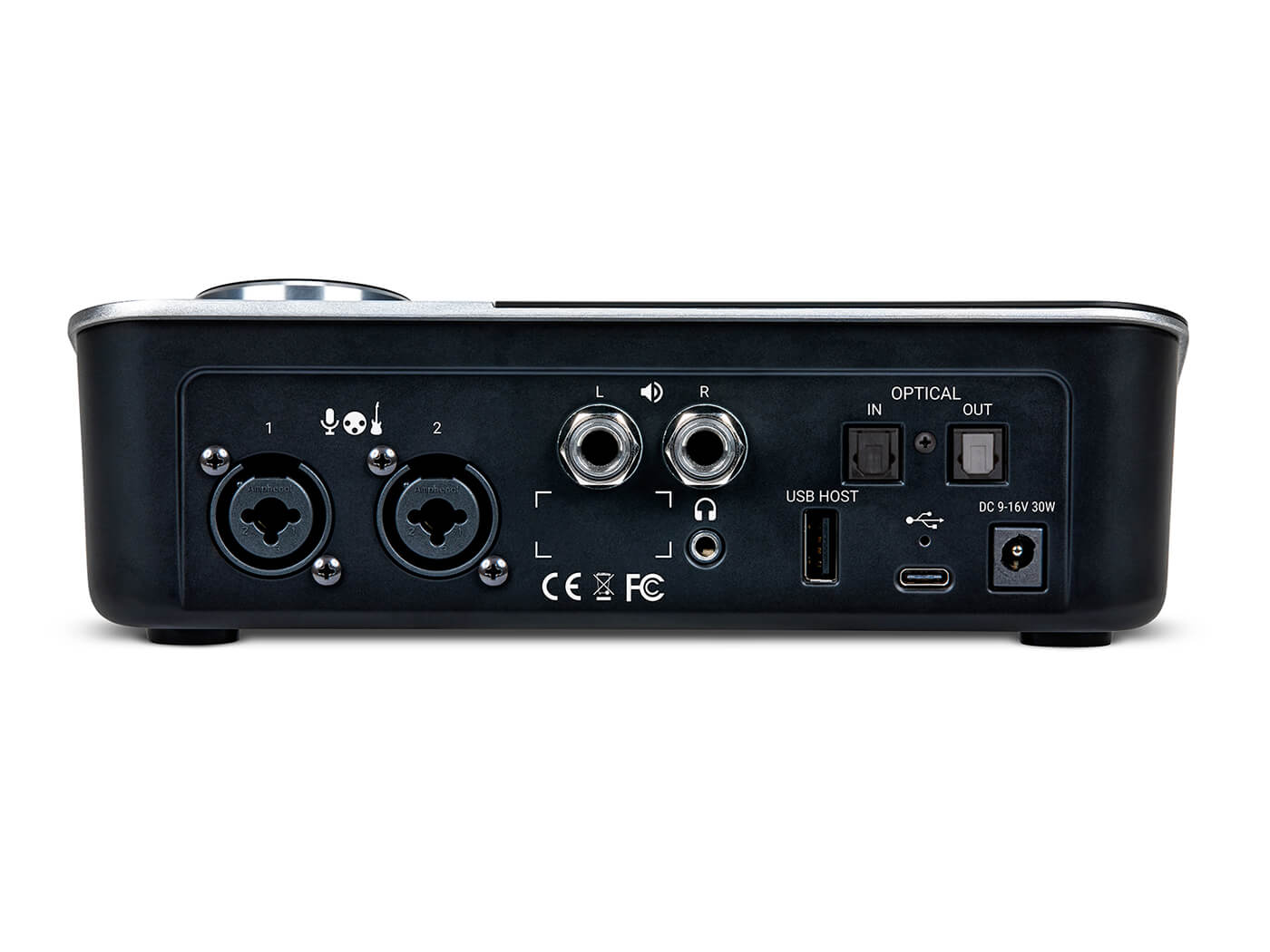 That said, Symphony Desktop’s DualPath technology certainly has the potential to stand apart from its rival. Much of that potential will be realised when the v1.2 software comes out, unlocking the full power of the DualPath system. It will still take Apogee some time to then build up a plug-in library to rival UA’s, but if (and when) it does, it’s easy to envisage Symphony Desktop and its DualPath technology becoming the superior option for DSP-equipped desktop audio interfaces.